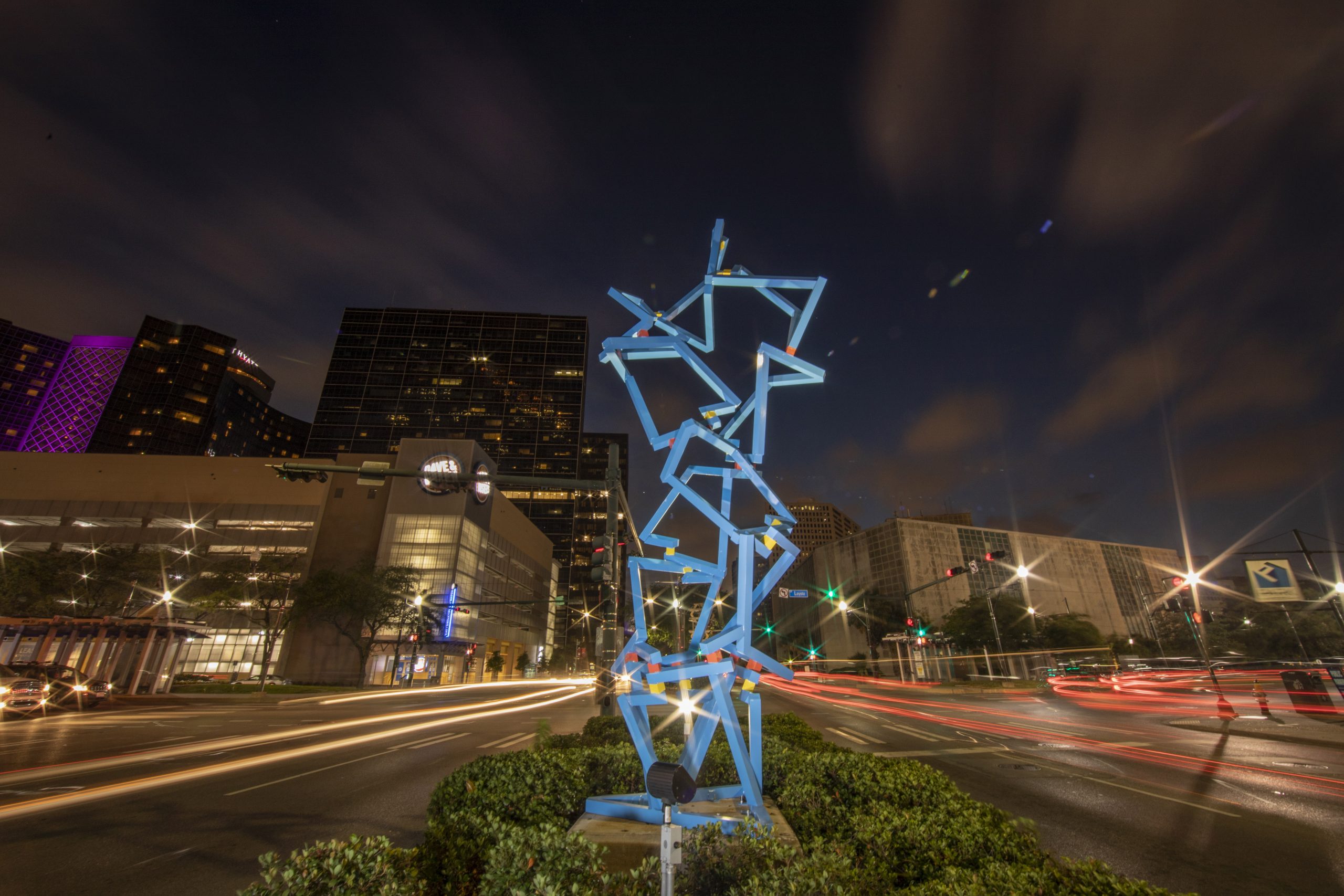 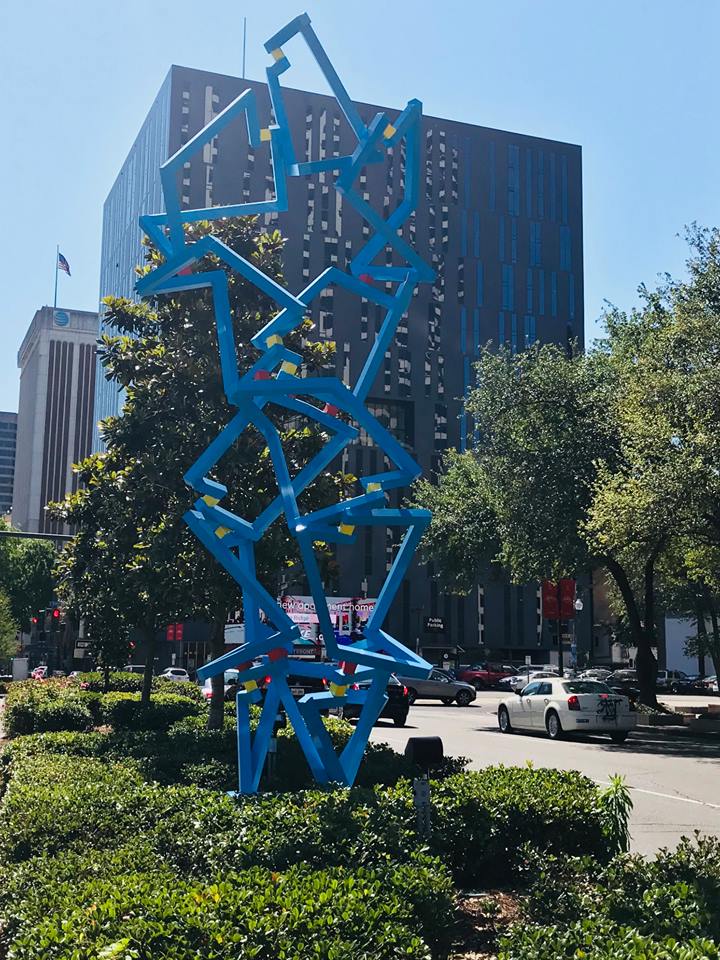 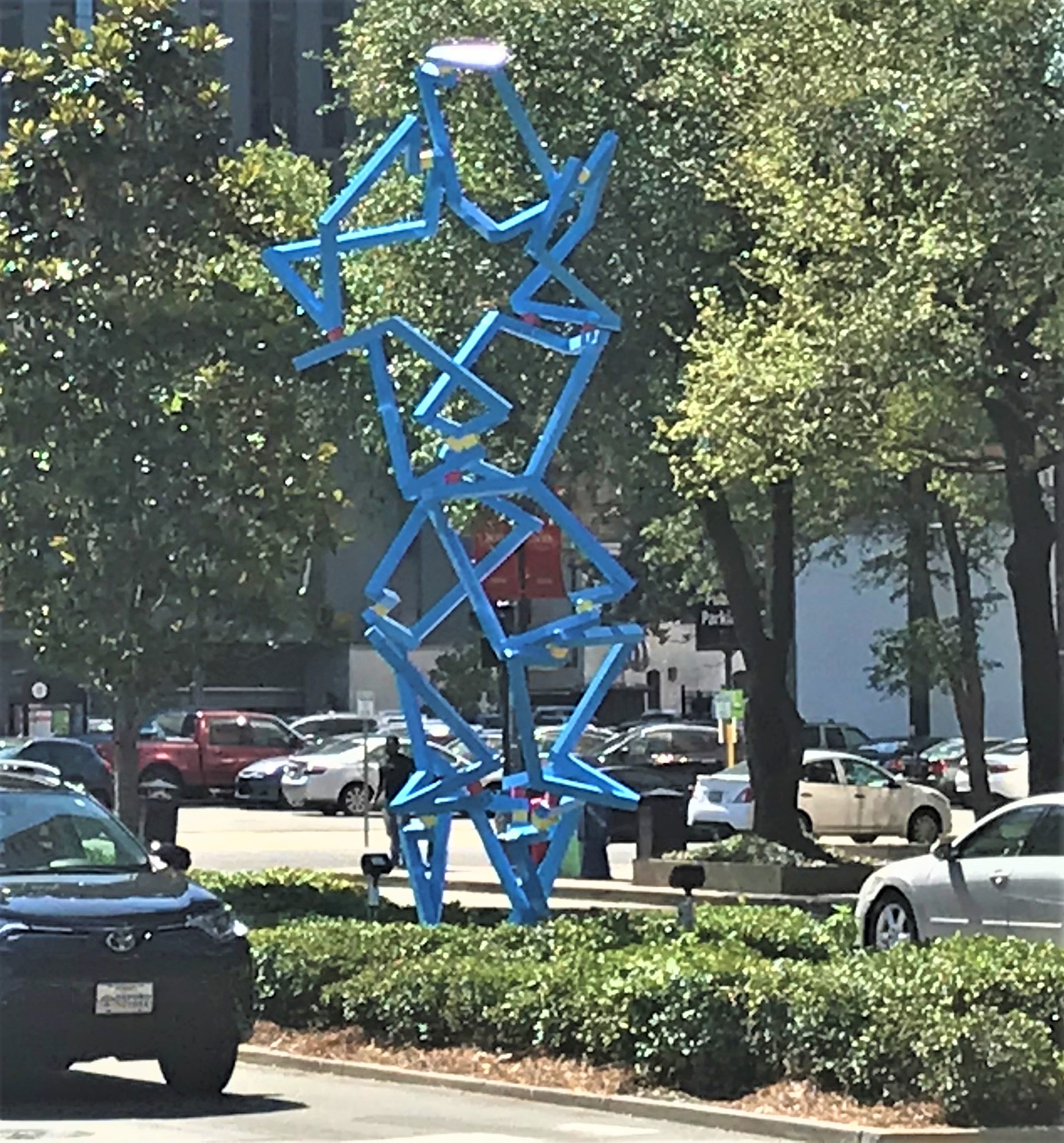 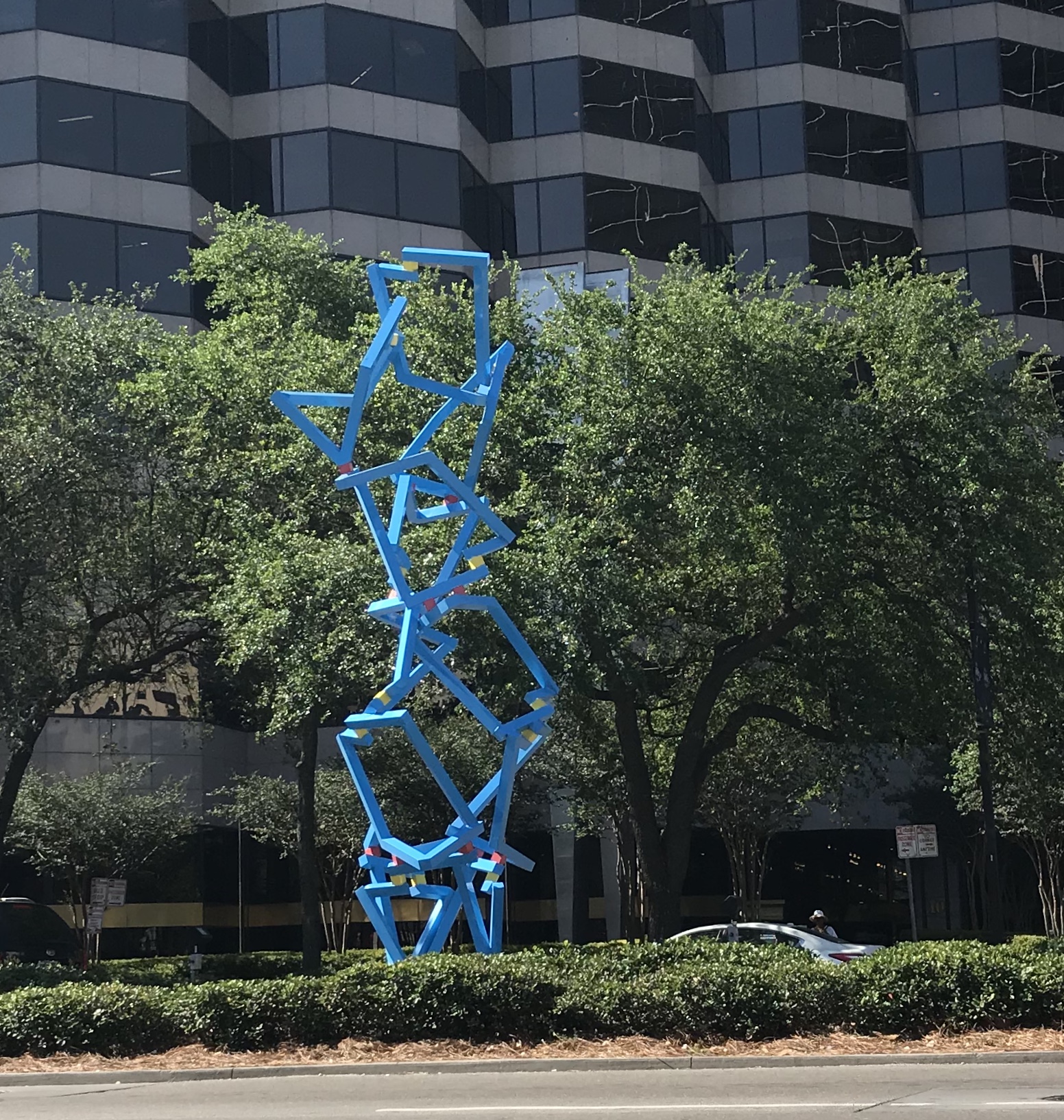 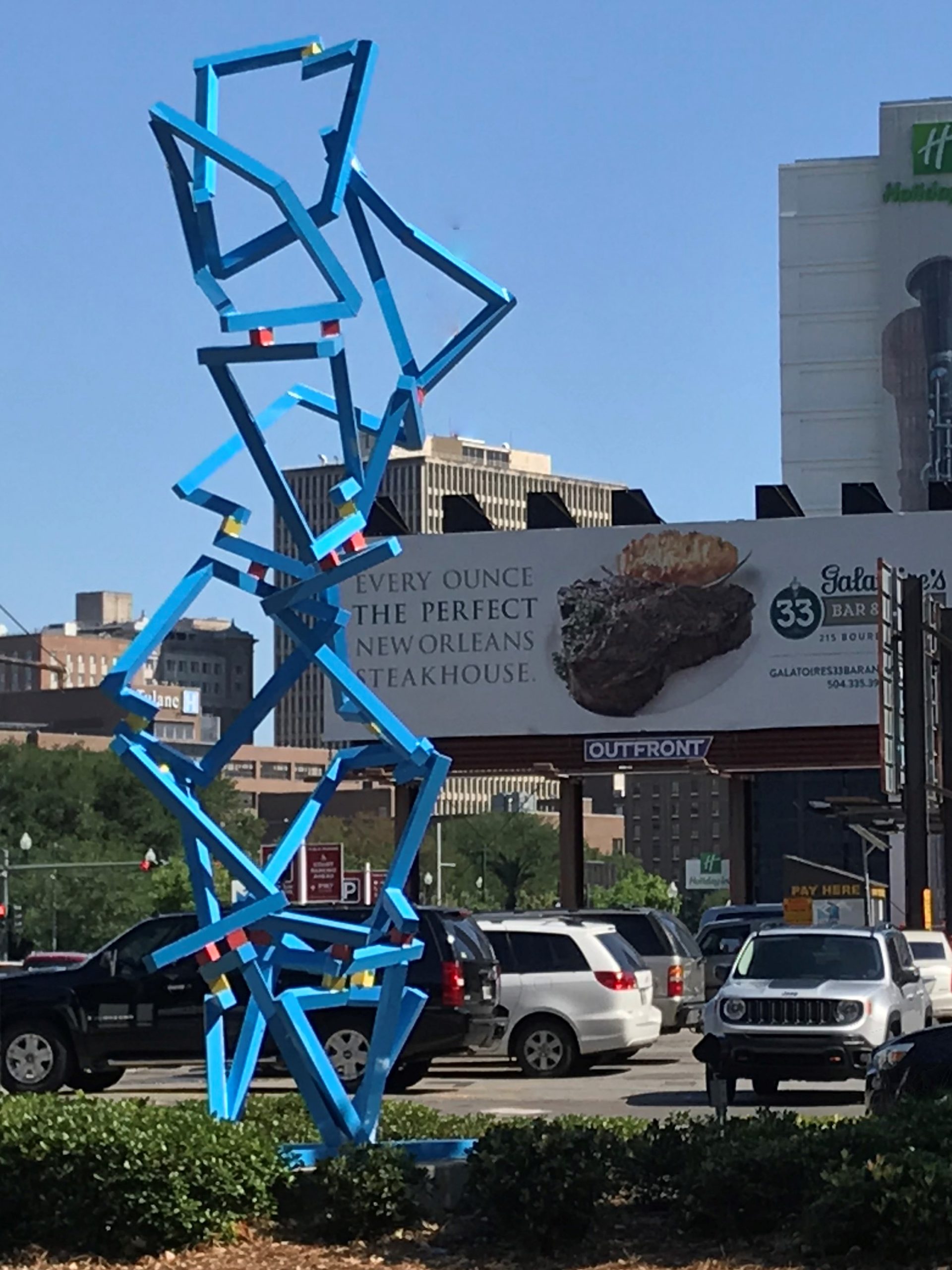 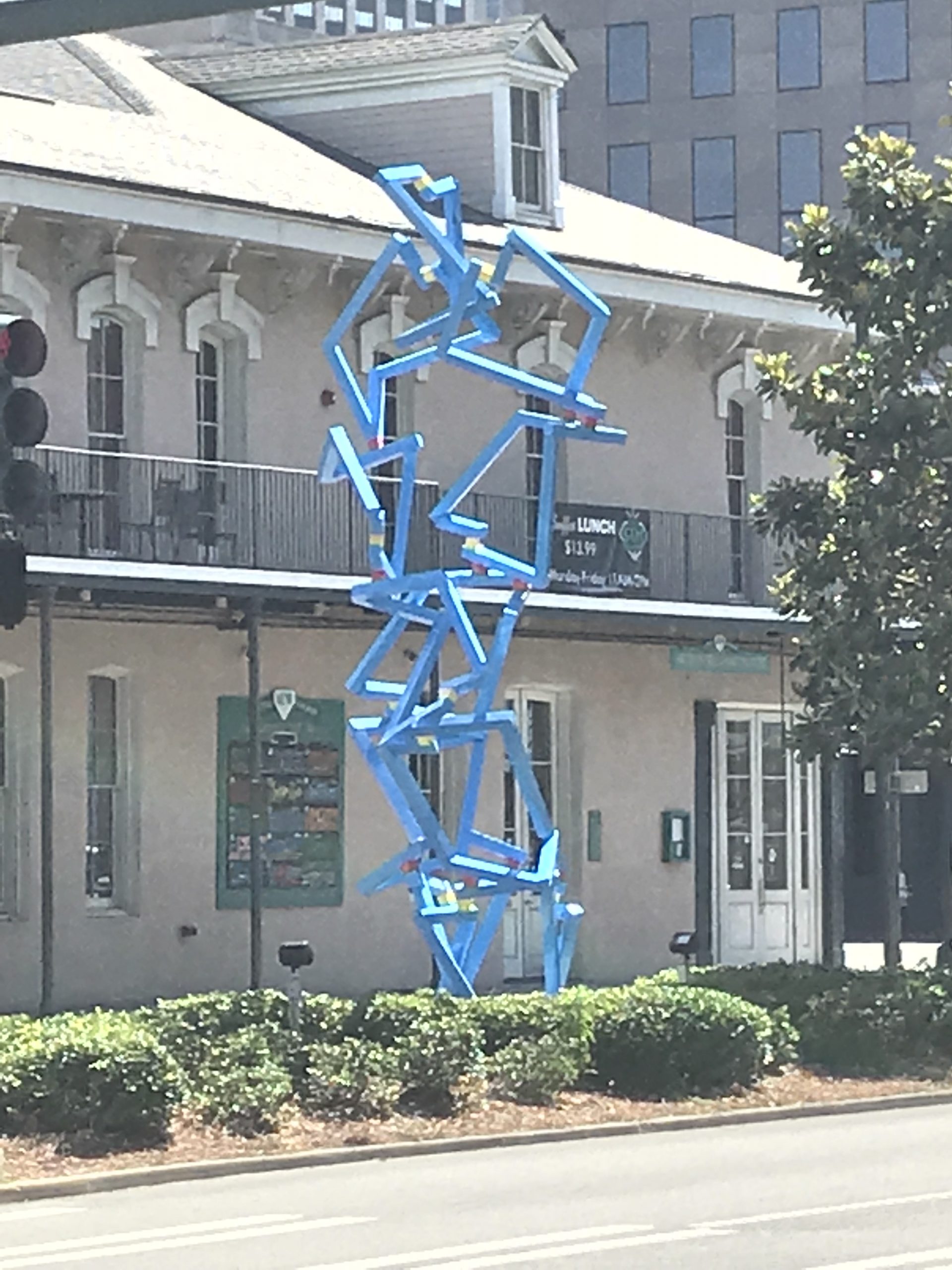 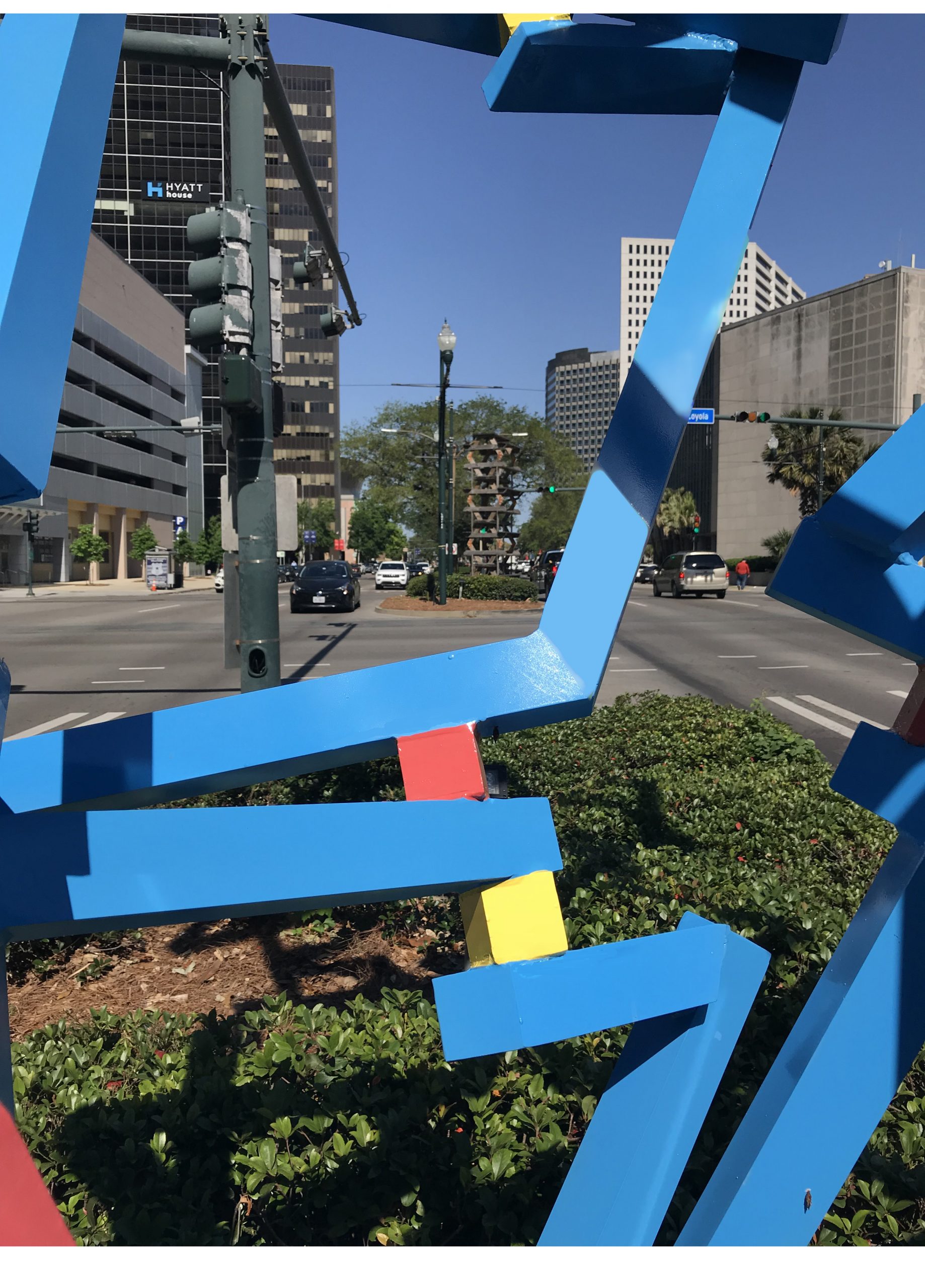 Froebel’s Gifts: Blue Circuit. 2018, 18′ x 8′ x 7′. created for Poydras Corridor Sculpture Exhibition, a public art exhibition in downtown New Orleans,
with support from Sculpture for New Orleans and the Helis Foundation.
The aluminum sculpture sits on a concrete base. It weighs about 700 pounds and is made of 12 identical welded modules. Each module is composed of 6 square beams and 1 cube. The modules are welded together in a figure 8 to form a tall tower-like circuit.
Over the years, PCSE has installed more than 35 sculptures by artists of local and international renown on Poydras Street between Convention Center Boulevard and South Galvez. A public-private partnership between The Helis Foundation, Sculpture for New Orleans, the Ogden Museum of Southern Art and the City of New Orleans Department of Parks and Parkways, PCSE is the South’s leading rotating public sculpture exhibition

This sculpture was planned for the Poydras Corridor Sculpture Exhibition in New Orleans. My goal was to have a highly visible landmark that would compliment the existing urban landscape, and not obstruct the views of the Corridor .

A 17" high model was made , composed of twelve identical 3D printed modules . It was photoshopped into a similar site, and reviewed by the selection committee. After approval, The model was sent to the fabricator, who cut square aluminum tubes ( 3" wide , hollow) into beams and cubes in order to enlarge the twelve 3D prints into twelve 42" high aluminum modules. The aluminum modules were then welded together according to the model . I then placed additional cubes on the edge, (to suggest implied motion) and selected the color distribution. The sculpture was then moved to be primed and painted with auto body paint.

The Froebel's Gifts series is an homage to Friedrich Froebel, the founder of the modern kindergarten in 1838. He made gifts (basic geometric forms -sphere, cube, cylinder, pyramid) for children to play with, believing it would increase their ability to think abstractly. Wright, Fuller, Maria Montessori and others were impacted by his educational methods, which are fundamental to modern art, engineering, and design. After learning that Frank Lloyd Wright and Buckminster Fuller played with these as children, I was stimulated to create an asymetric geometric form, and use it as a building module for large structures. It is of note that Maria Montessori and the Bauhaus were also impacted by Froebel's work. " To Froebel belongs the credit for finding the true nature of play and regulating it to lead naturally into work. The same spontaneity and joy, the same freedom and serenity that characterise the plays of childhood are realised in all human activity. The gifts and occupations are the living connection which makes both play and work expressions of the same creative activity. " W N Hailmann