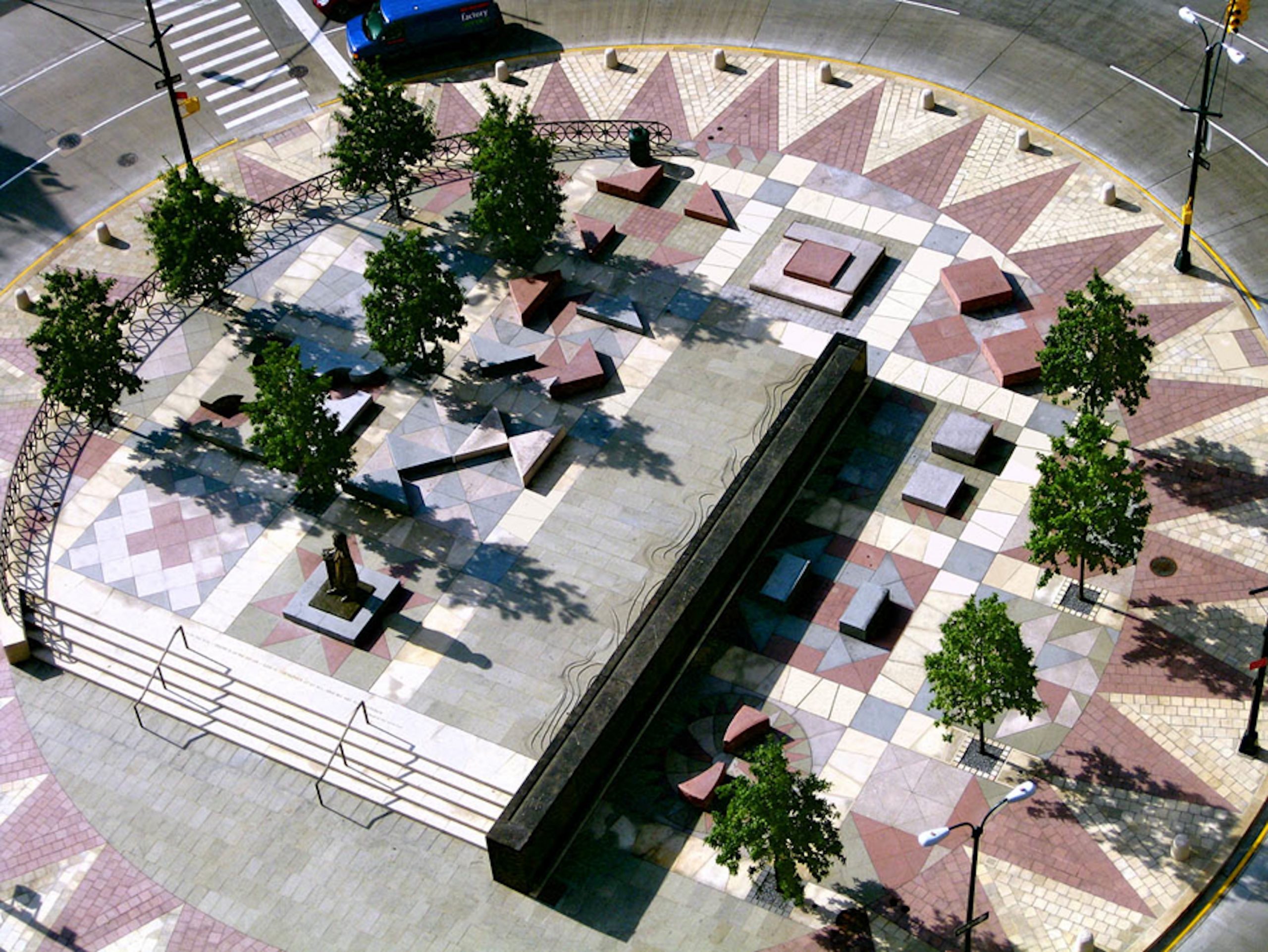 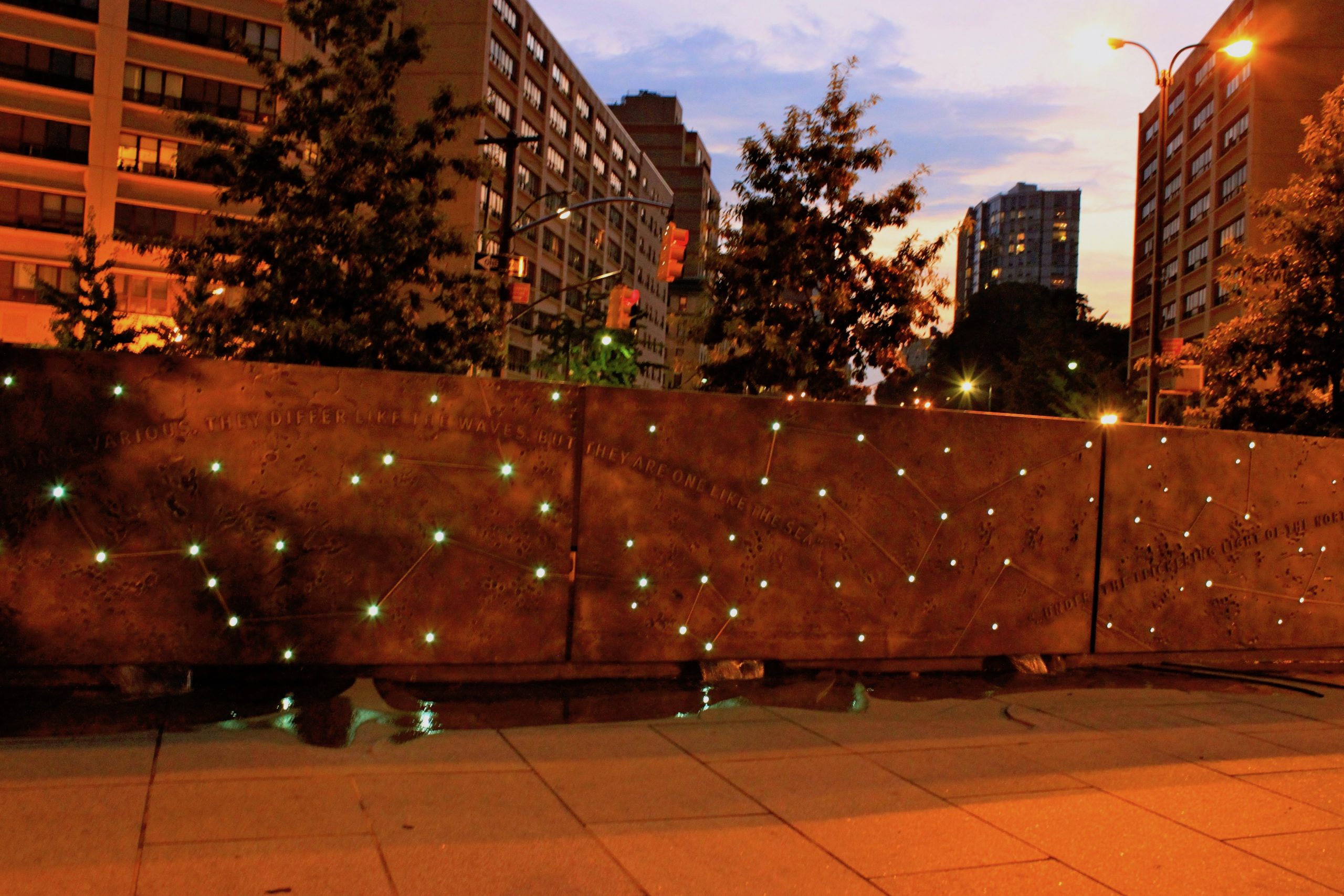 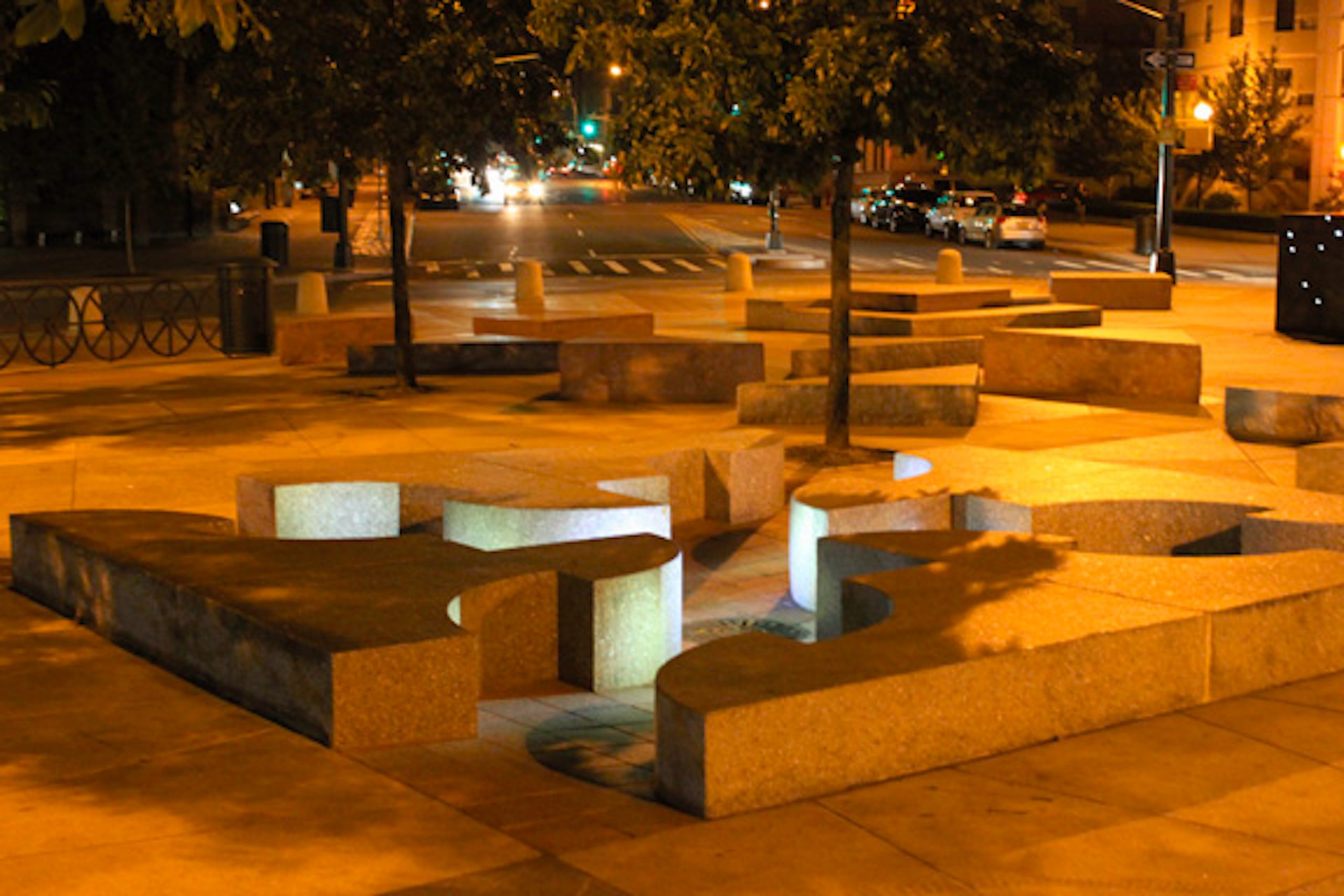 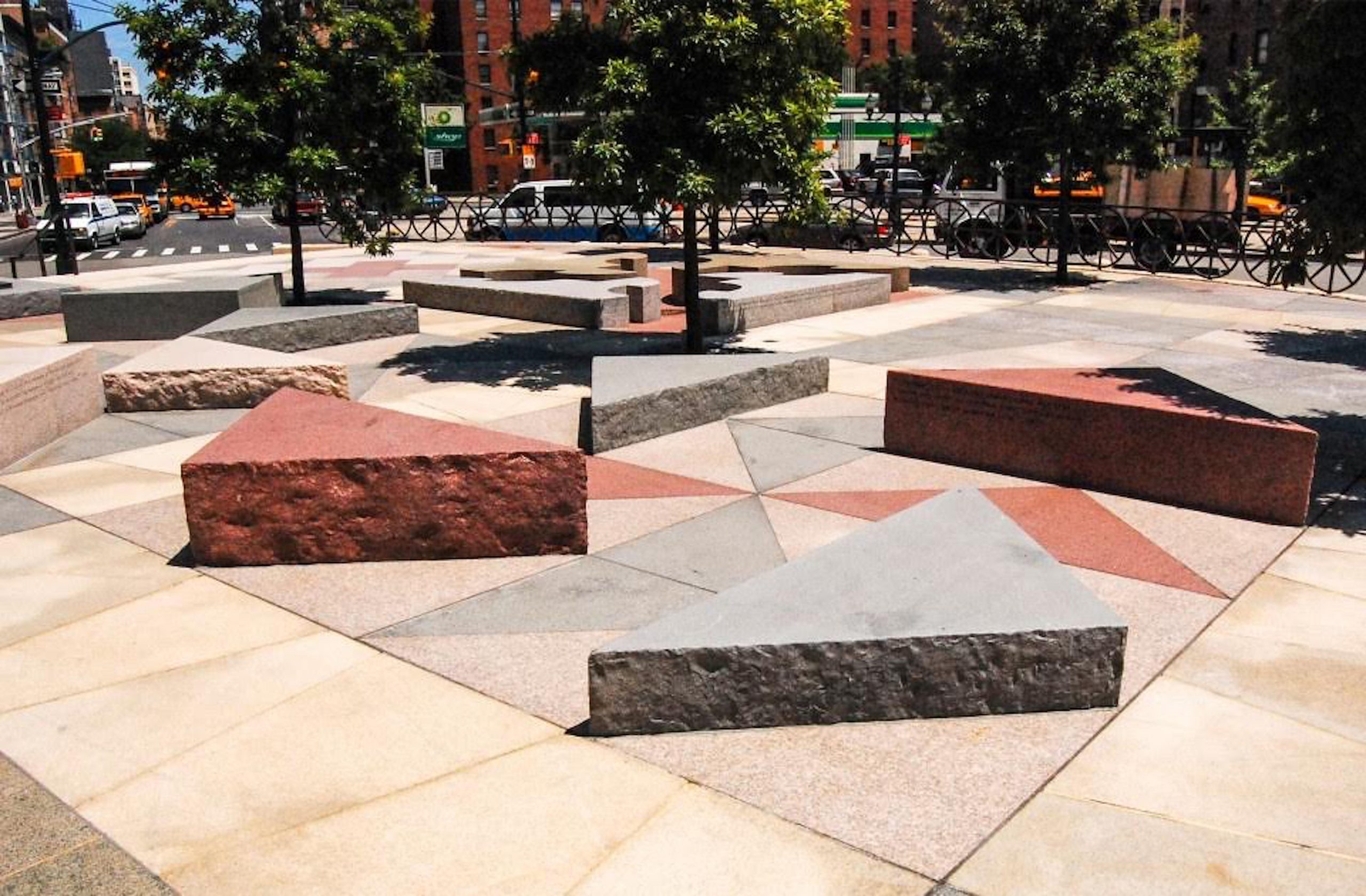 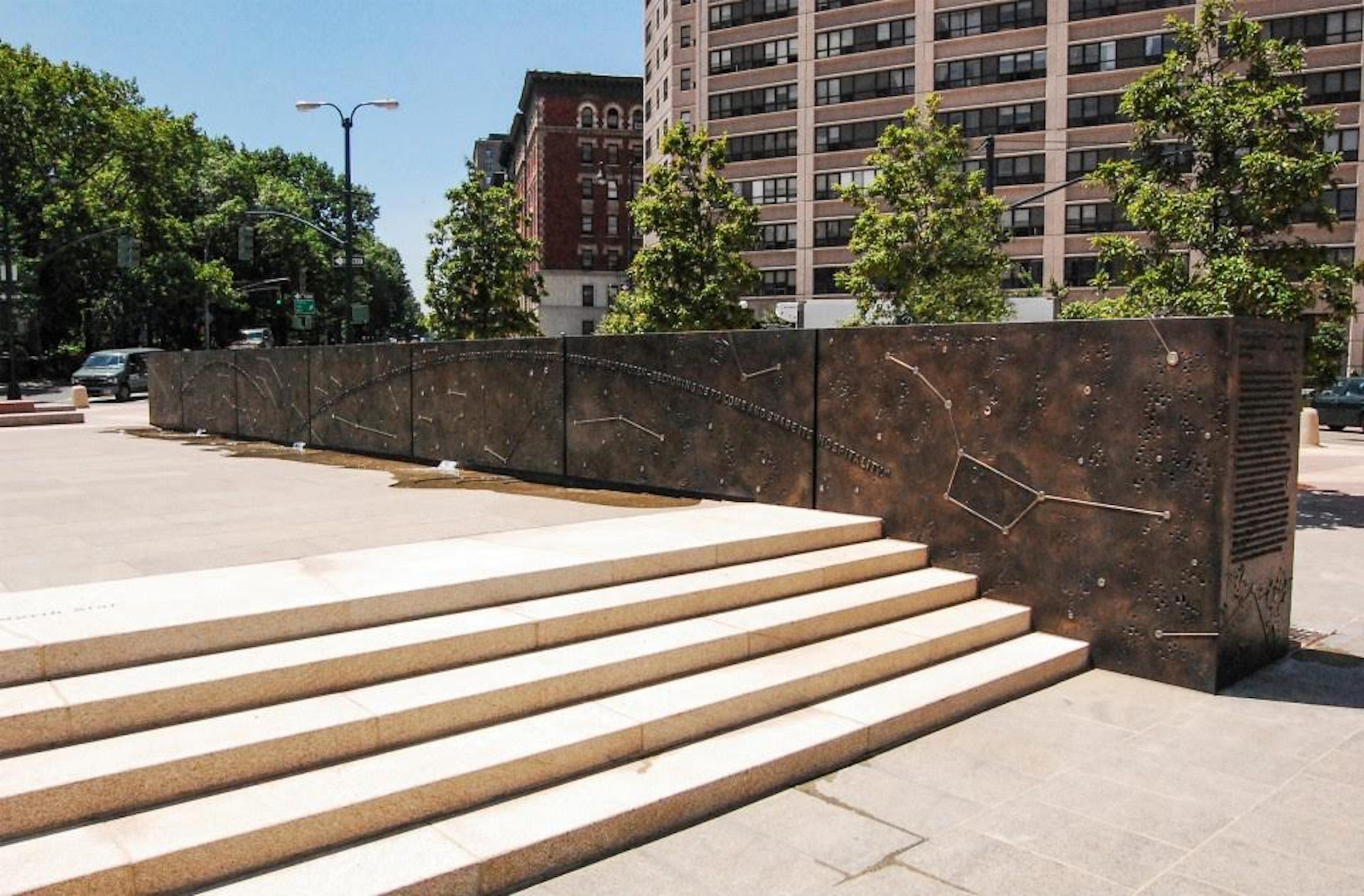 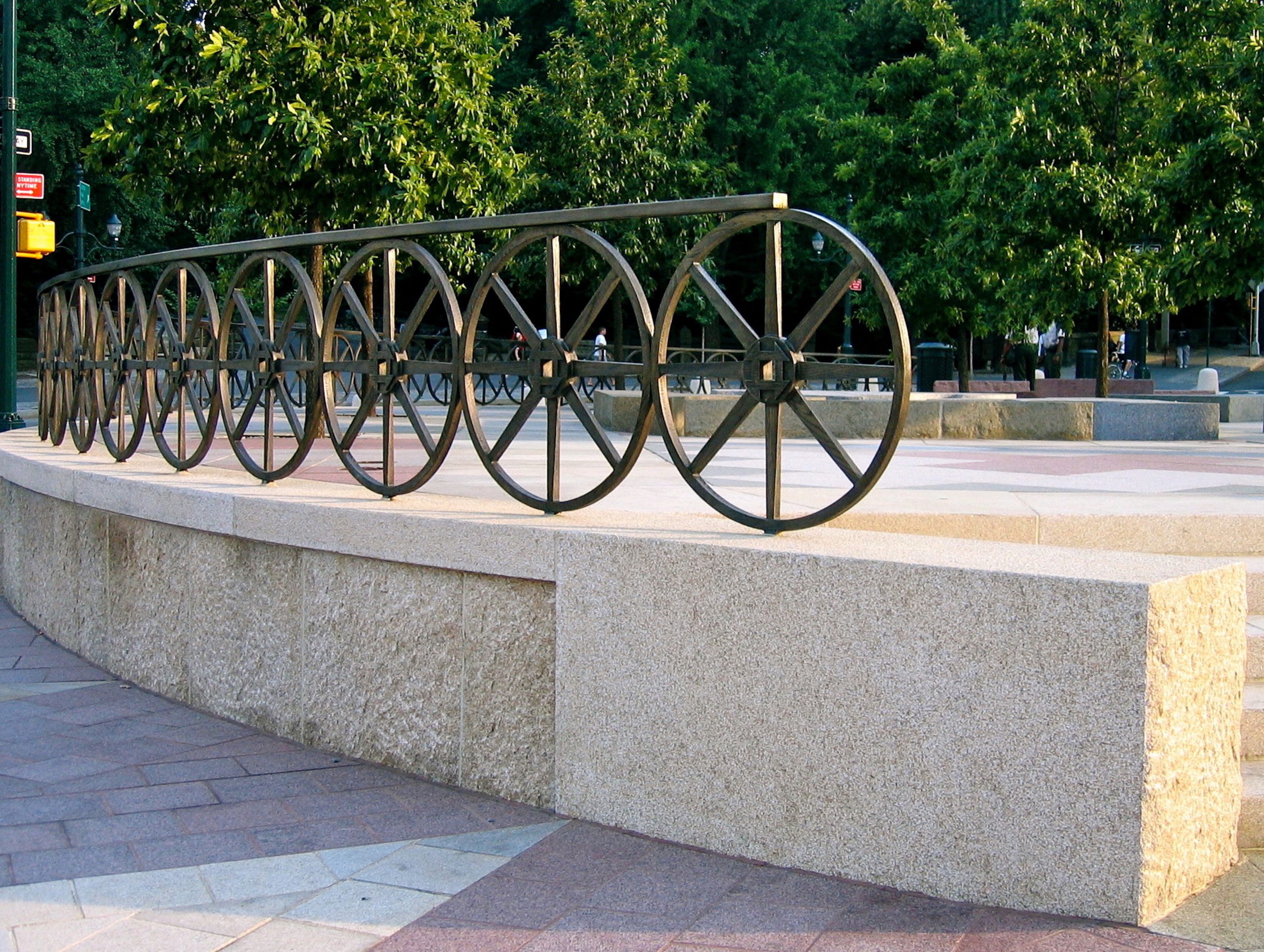 This quarter-acre memorial honors abolitionist Frederick Douglass. The plaza located at the northwest corner of Central Park NYC is an artistic and architectural commemorative celebration of this women’s suffragist, writer, orator, publisher and statesman. My design scheme included a 30’ bronze perimeter fence with a wagon wheel motif signifying the vital role of the Antebellum Plantation Blacksmith, said to be a dispatcher of information using the anvil and hammer to ring out messages. Another major symbolic and practical component is a 60’ bronze linear fountain studded with illuminating ”stars” (made from fiber optic lighting) that symbolized the constellations that guided people escaping slavery on their journey by night. Beneath a grove of linden trees are subtly varying hues of granite pavement and sculptural seating, inspired by traditional African-American quilts inscribed with historical details and quotations creating a rich tableau reflecting the life of Douglass and the slaves’ passage to freedom. A central heroically-sized bronze sculpture, depicting Douglass standing on a raised granite symbol of the north star was crafted by commissioned Sculptor Gabriel Koren.

The goal for this project was to design a site-specific traffic circle that would serve as a lasting tribute to Frederick Douglass. Located at the crucial Manhattan junction of Central Park West and 110th Street, which symbolically divides historically segregated communities, The Frederick Douglass Circle serves as a “gateway;” it is also a “bridge,” a “linkage,” a site for healing, reconciliation, and looking forward to a revitalized future through remembrance.

The Frederick Douglass Circle was the largest public art commission that had ever been undertaken in New York City. Every constituent part of my winning design was designated as an art work. Contractually, this entailed my participation in every phase of the project’s development, from design to completion, along with sign-off on each step. I collaborated with the Landscape Architect, the Engineering Consultant, various NYC agencies, including the Department of Design and Construction and the Department of Transportation, foundries, artisans, and designers for the lighting, fountain, and graphic design. I acted as project manager for the entire period of more than eight years, from start to finish, completing the project on time and within budget. This also required managing relations with numerous stakeholders, including the NYC Arts Commission, and NYC Community Boards.