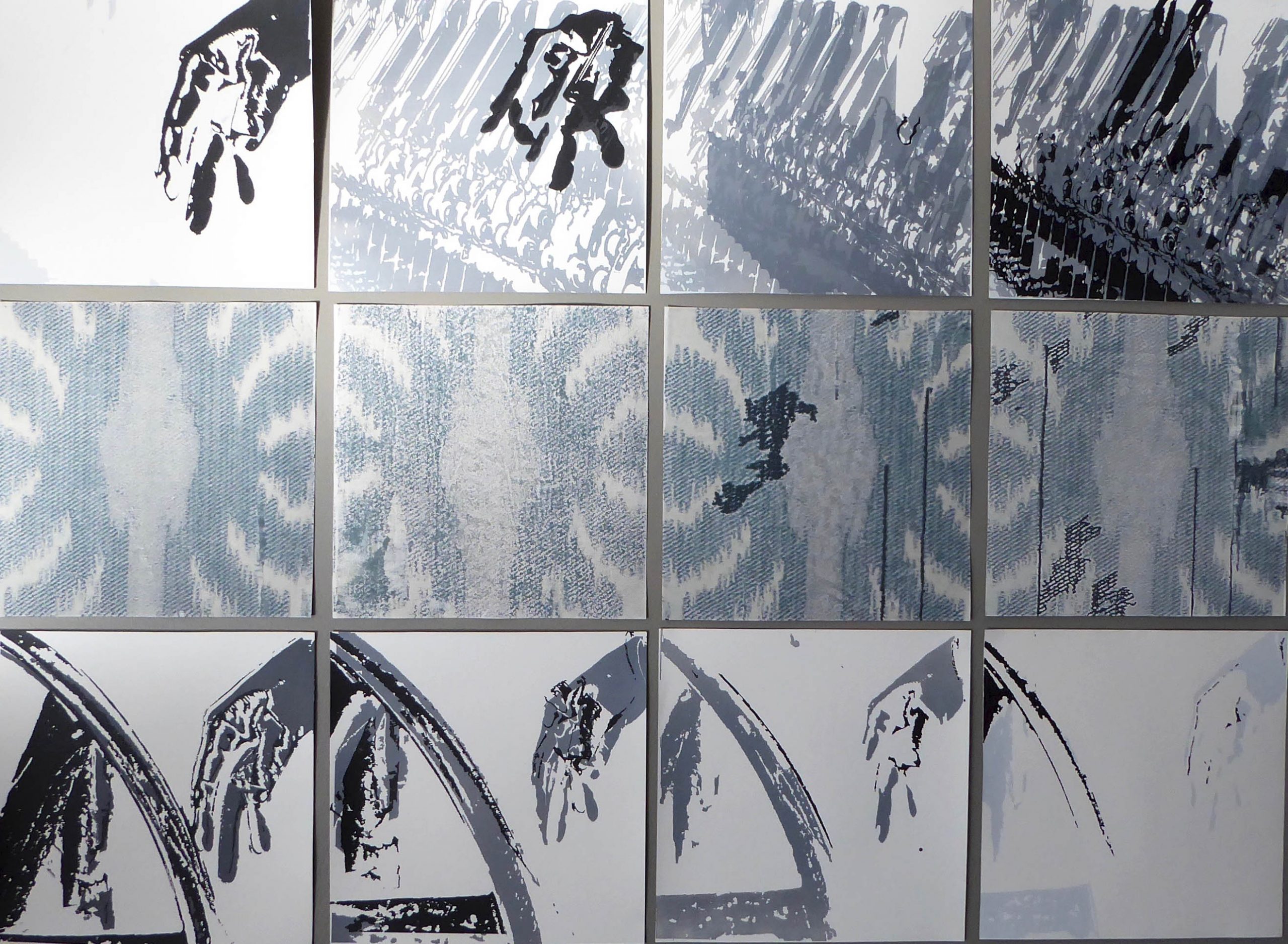 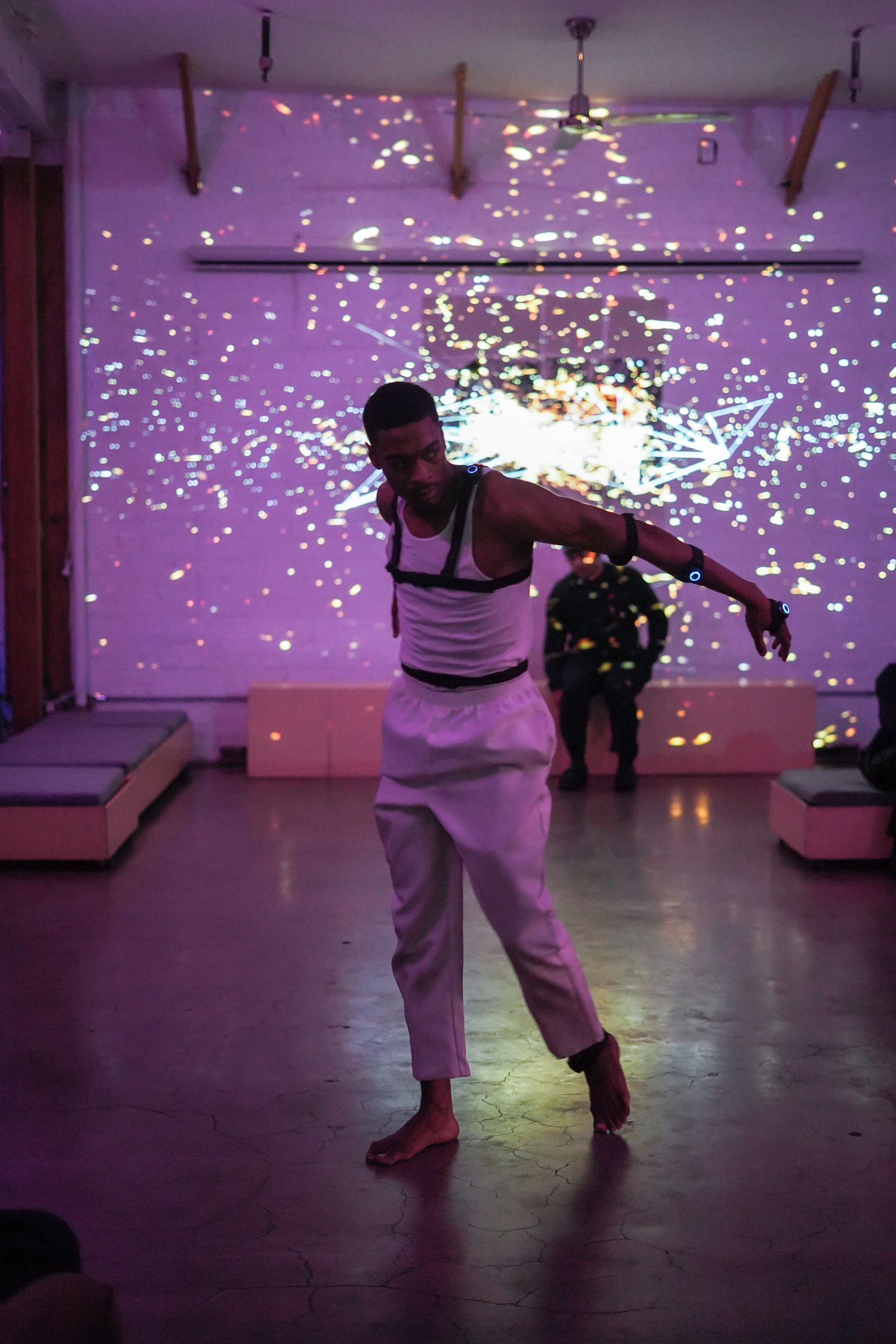 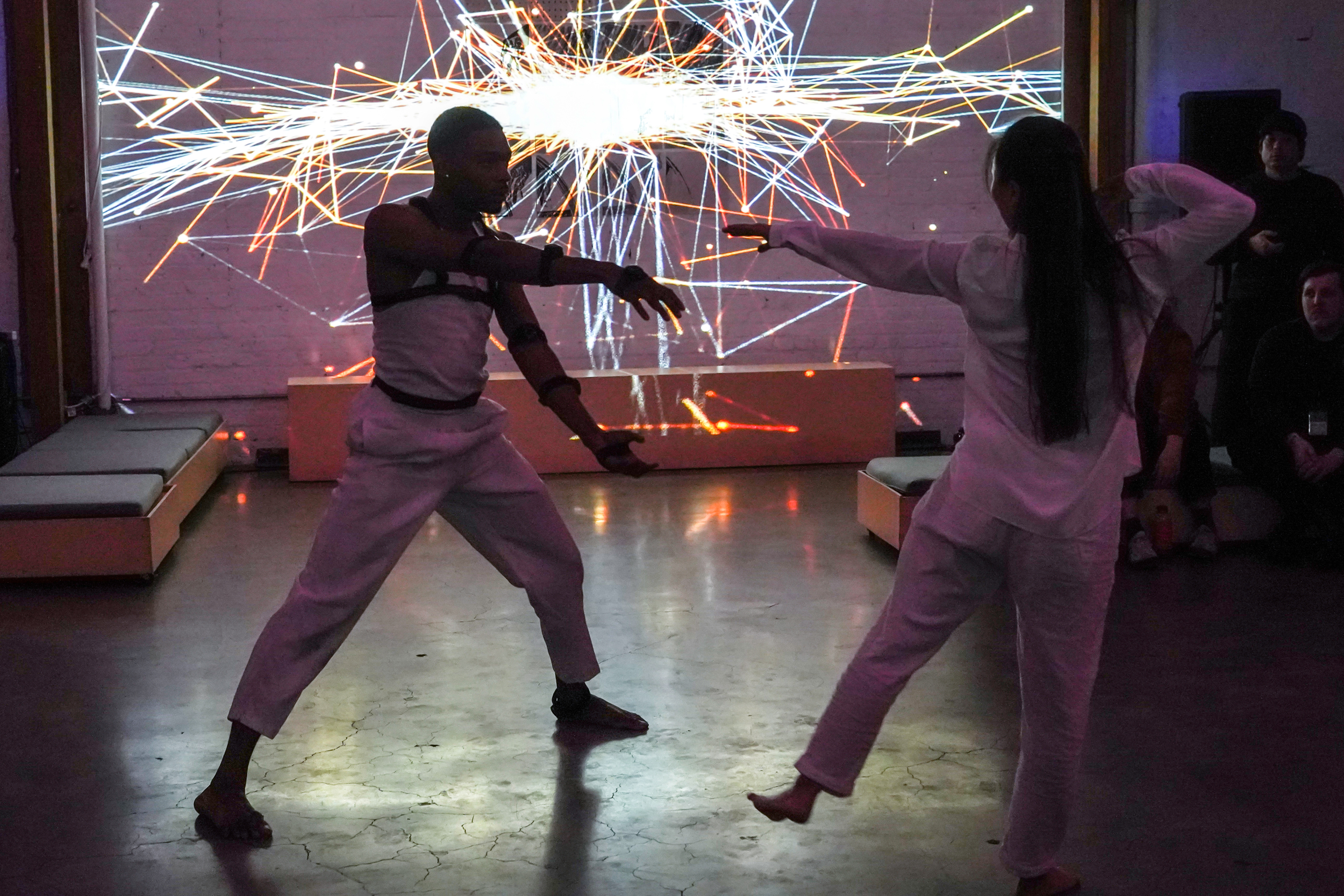 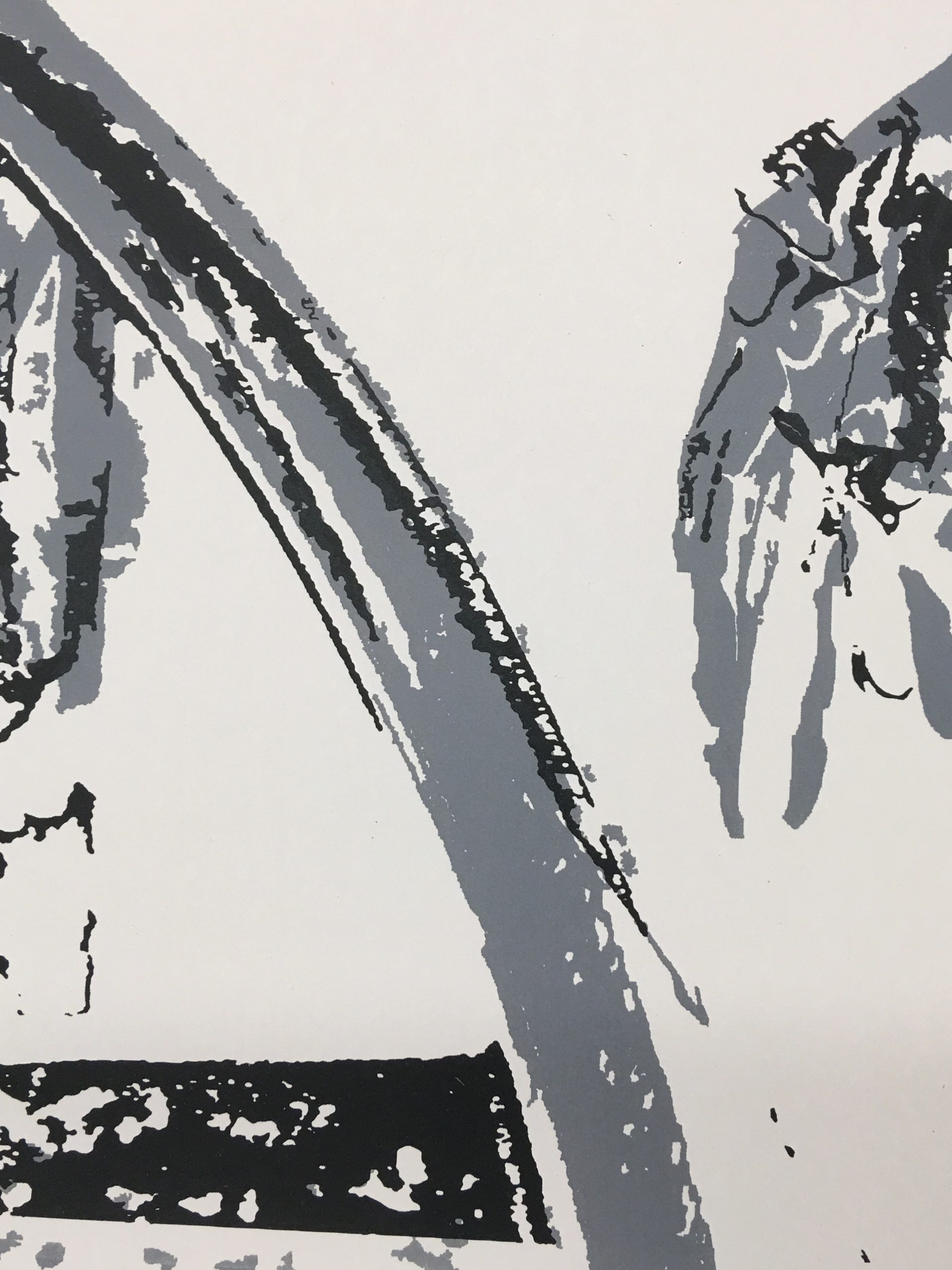 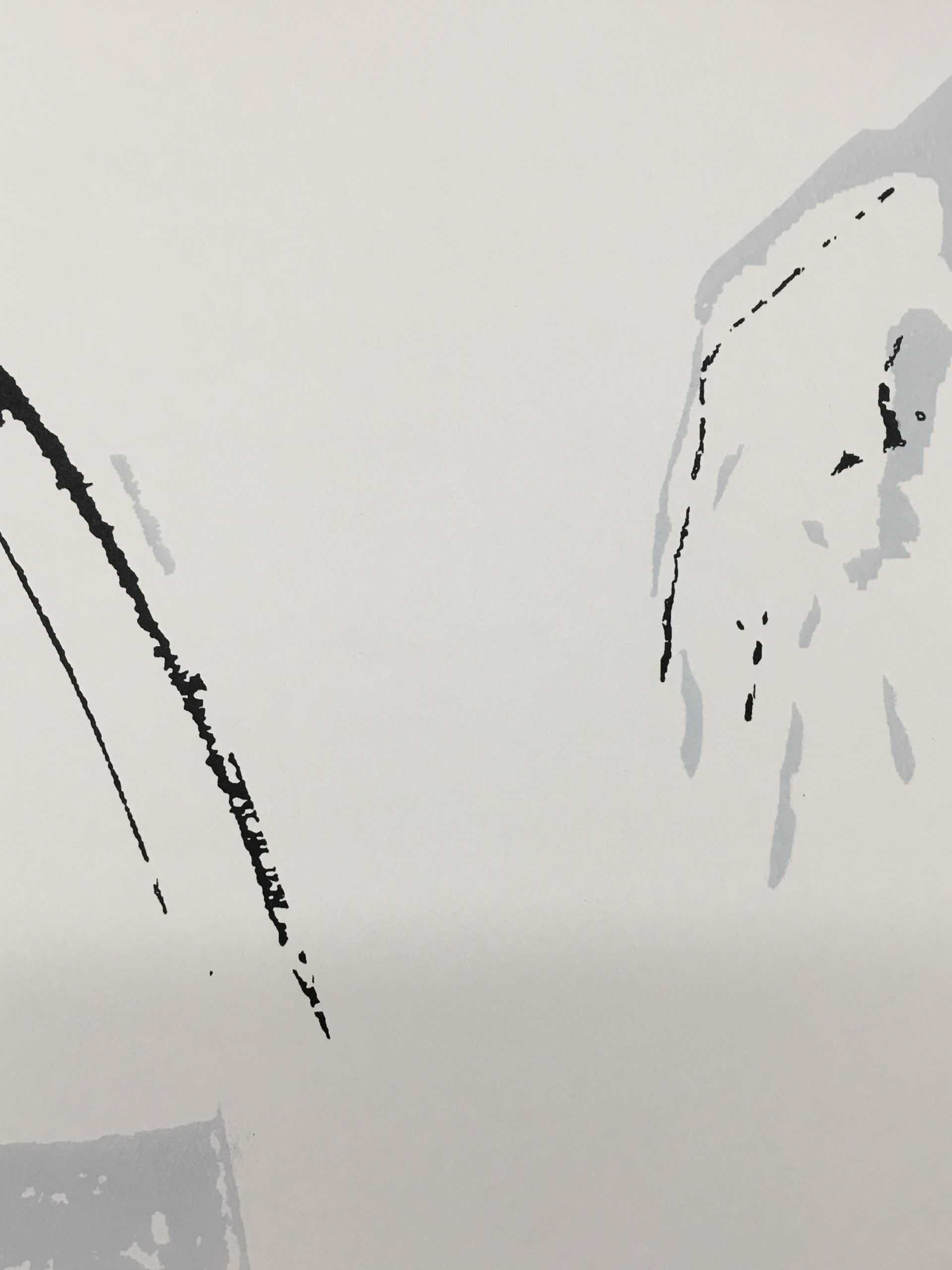 All of it Now

Fractals & Fragments was an interpretive dance performance choreographed and supported by original art, custom textile production, original music, and 3D animation. It tells the story of social change potential of technology in emerging and developed countries. The performance narrates the story of the loss of hand spinning and weaving to old production technology, such as factories, and the return of those skills to the original makers through newer technology. The performance narrative celebrates the story depicted in an original lithograph created based on travel in South East Asia and visits to hand spinning and weaving communities.

The story-telling would not have been possible without collaboration and commissioning of the talented dance performers, the musicians, and live-video artist to bring the 2-D lithograph to life in 3D as a live performance. The dance, music, and animation added a dynamic to the narrative which was not possible to achieve with just the 2D original lithograph. The collaborative effort commissioned by J.Pera Designs increased the audience engaged in the story-telling of social change and the potential benefits of continued technological change. The program was interactive to the extent that the audience's movements, in response to the performance, could be tracked and projected during breaks in the dance. In sum, the commissioned performance made awareness of social change accessible in an educational, entertaining and personal way.

As founder of J.Pera studio, I facilitated the collaborative efforts of the dance performers, musicians, and the live-rendering video artist. This included writing and refinement of the script, given the expertise of each of the artists. In-person meetings, video chat collaborations, and direction managed by 1664 Ideation Studio, enhanced the overall quality of the performance. These collaborative actions augmented our ability to make a message about social change accessible to an audience of approximately 100 people in a creative space belonging to Navel LA, a non-profit social community. The content of the program evolved in transformative ways that would likely not have happened if it had been a solo versus collaborative effort across multiple audio, visual arts, and social platforms. I believe that the potential for social change was enhanced by making the content visual, auditory, and interactive.

The collaboration included working with a textile expert to code the design of a custom-made costume highlighting the lead dancer. The result was a beautiful costume made with the new spinning and weaving technology depicted in the performance. It is this technology which makes social change possible by returning the production process to the artists and makers, working in conjunction with mills, rather than being displaced by them.