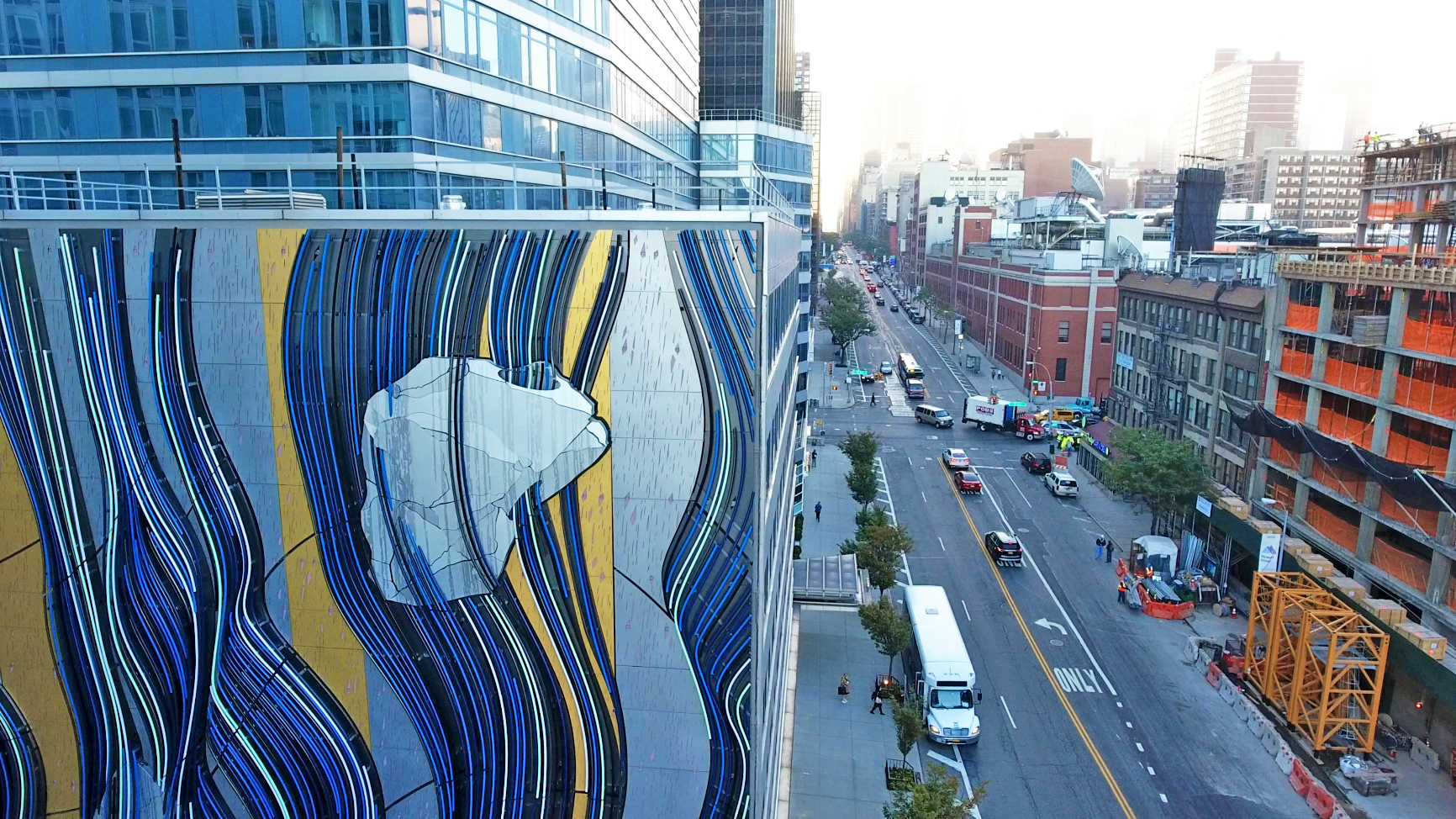 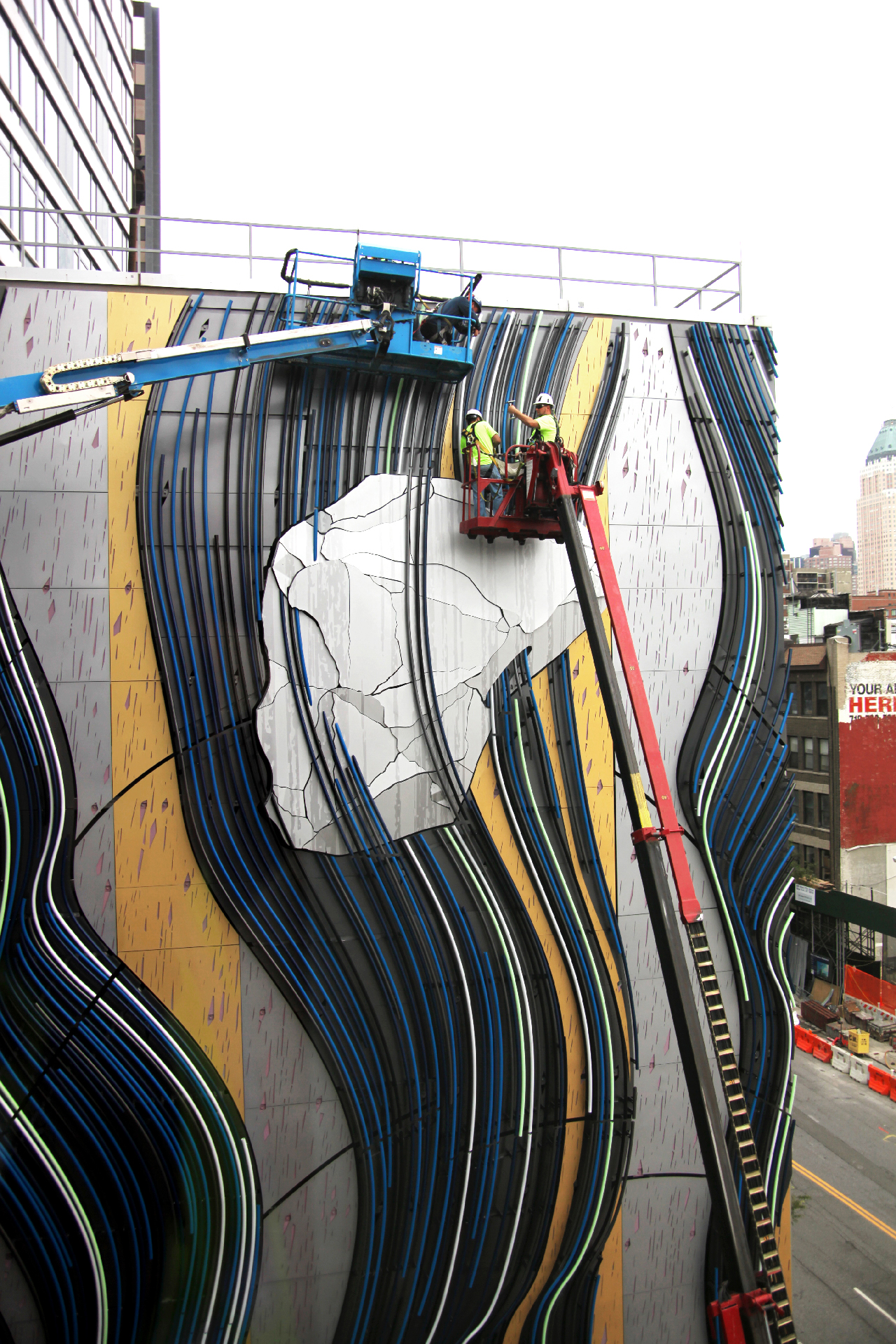 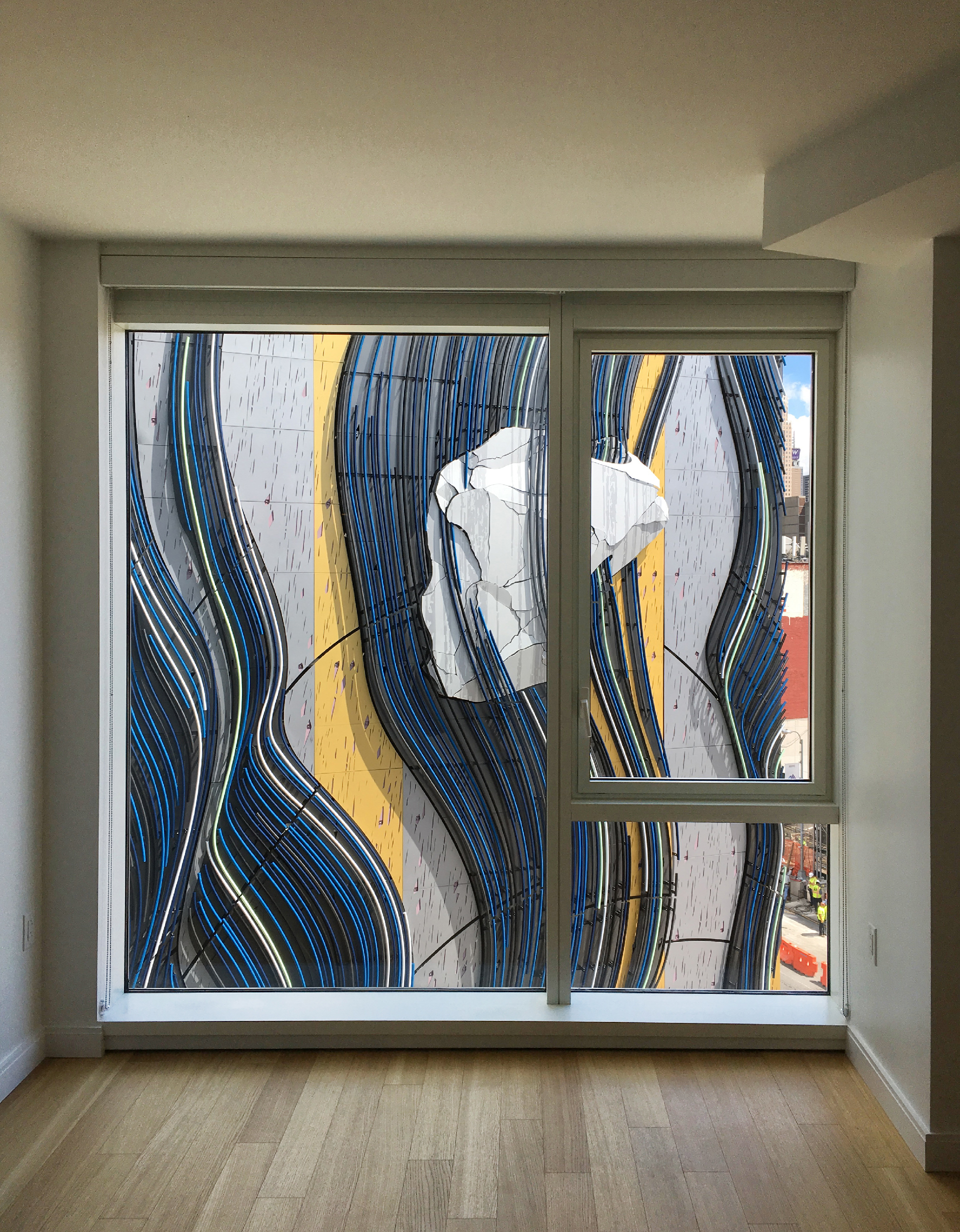 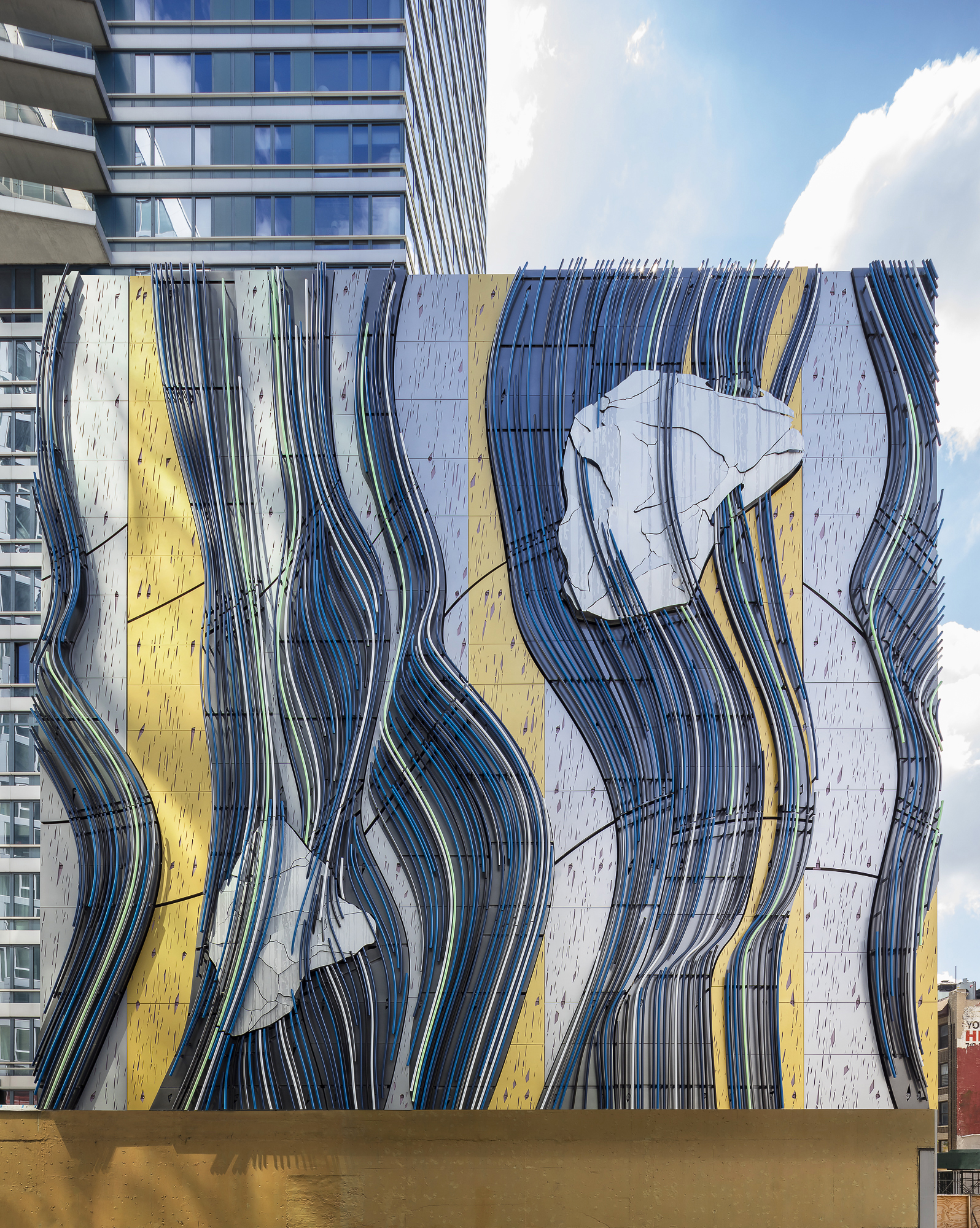 The client, The Durst Organization, is the world’s leading builder of green skyscrapers. A 100-year-old family owned company, they are passionate and active environmentalists – committed to creating a green and sustainable NYC. Living for a century along the banks of the Hudson River, they have witnessed its near death and contributed to its rebirth. As a young artist at the time, the movement to save the Hudson (led by Pete Seeger) was a prime factor in germinating my own life-long inquiry of art and social impact.
Flows Two Ways stands as a reflection and meditation upon the Hudson River and as a visual overture to 57 West. The title was inspired by seeing the Pete Seeger sloop Clearwater sail by one sunset evening.

“Muh-heah-kun-nuk” is the Hudson’s Native American name and loosely translates as “Flows-Two-Ways”. Always a vital artery, the river’s enormous southern mouth causes a north–south tidal shift in currents for nearly 200 miles upriver. As such the river is more than just a waterway, it generates an enormous bio-diverse estuary and abundant life force

Two independent currents separate yet connected. As goes the river, so goes the city.

This was a completely voluntary and creative invitation by the Dursts to “do something”. It grew to its ultimate form and scale through collaboration and agreement – one “yes” to the next.

In our very first creative meeting, Bjarke said “Sculpture and skyscraper has a history in New York that is unique in the world. I’m intrigued with the way they can be completely independent, yet intrinsically linked”.

Throughout the 57 West super-block, sky touches ground (unusual for NYC). BIG’s building, VIA, is a tetrahedral geode, a transparent floating courtyard built around air, light, earth, and water… and is the development’s anchor and icon. Here is where earth and river meets sky, and VIA is the keystone, designed to receive the western light’s first blasts. Amidst all this was the eight-story west facing concrete shear wall of the adjacent skyscraper, laid bare by demolition. Never meant to be viewable, it was the solidest of solids, and it became our canvas. Could this brutalist opaque assault become a meaningful and inspiring east facing view for VIA’ residents?

We immediately set to drawing and painting, with engineers and fabricators constantly in our studio interpreting the buildability of every stroke, gesture and concept.

My inquiry is the intuitive human gesture on a civic scale. Flows Two Ways is an extension of that search - gesture, scale, social impact, and our essential relationship to the horizon - already at play within NYC’s skyscrapers. For decades, our studio has created large-scale public sculptures, using a gestural language rooted in drawing. We first became known for giant bamboo site-works in urban areas struck by natural and social disasters, meant to take one’s eye to the sky and strike tableaus of control and accident, gravity and weightlessness, mass and velocity, collapse and resiliency.