Flight Over the Susquehanna - CODAworx 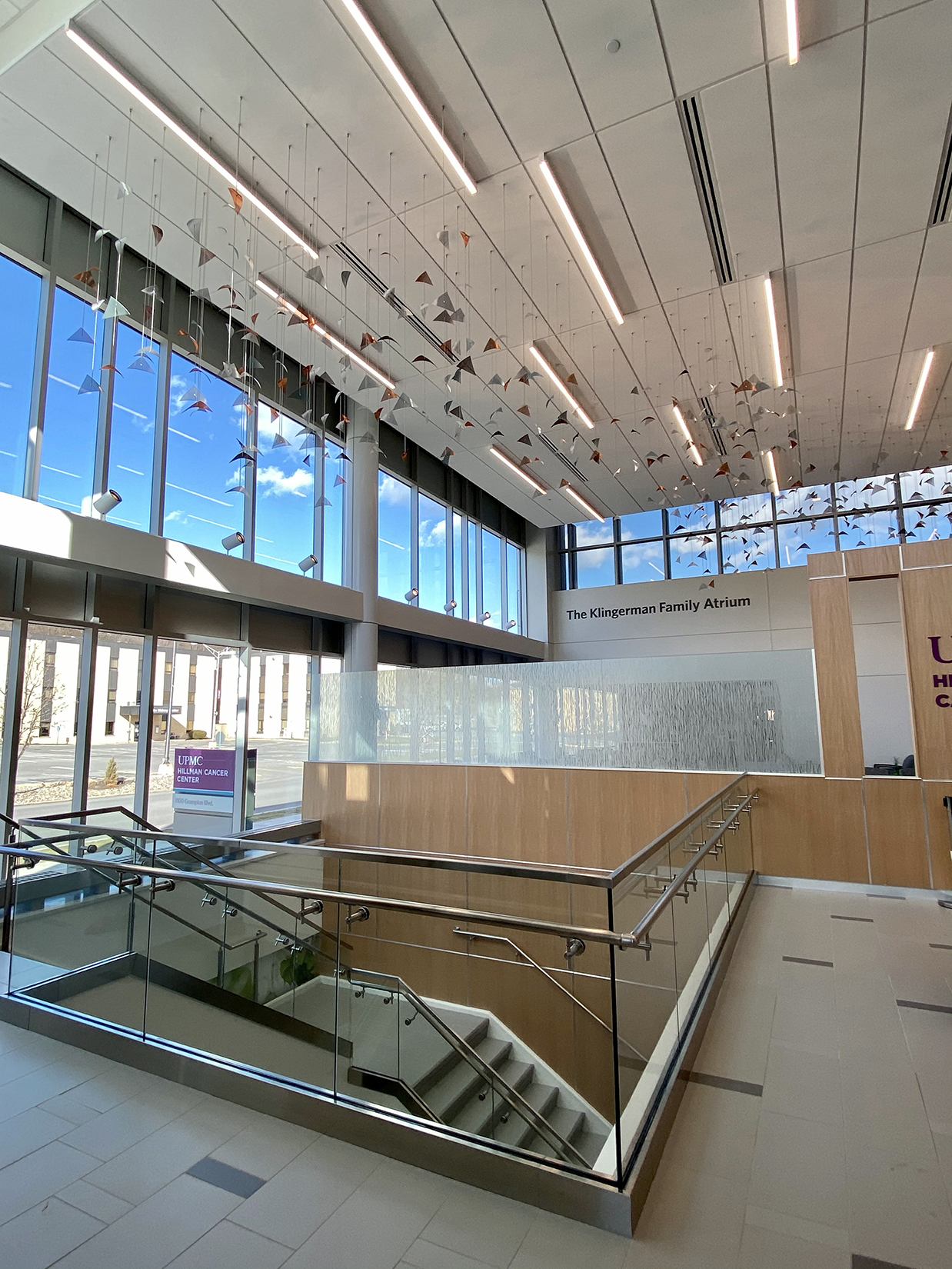 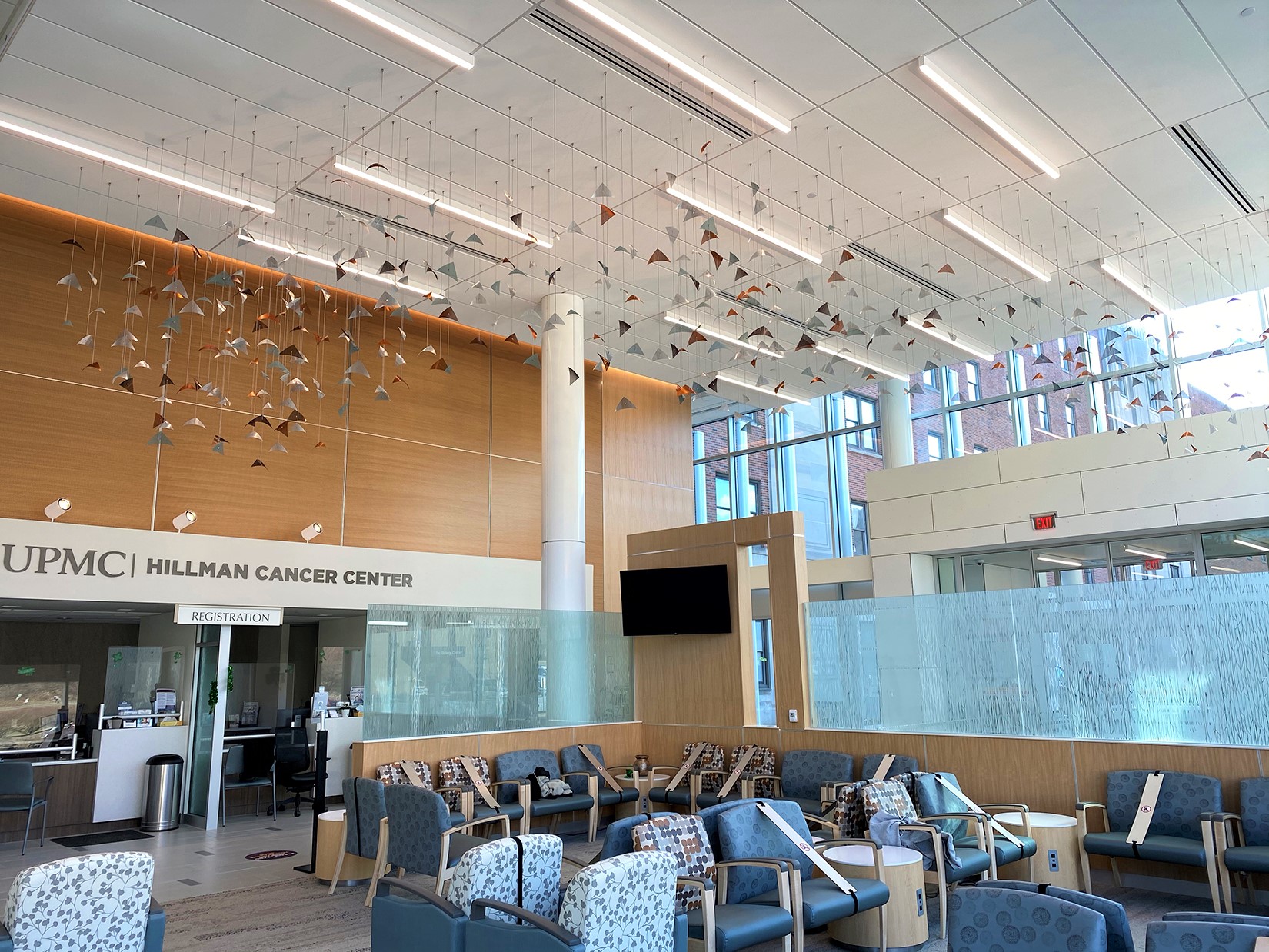 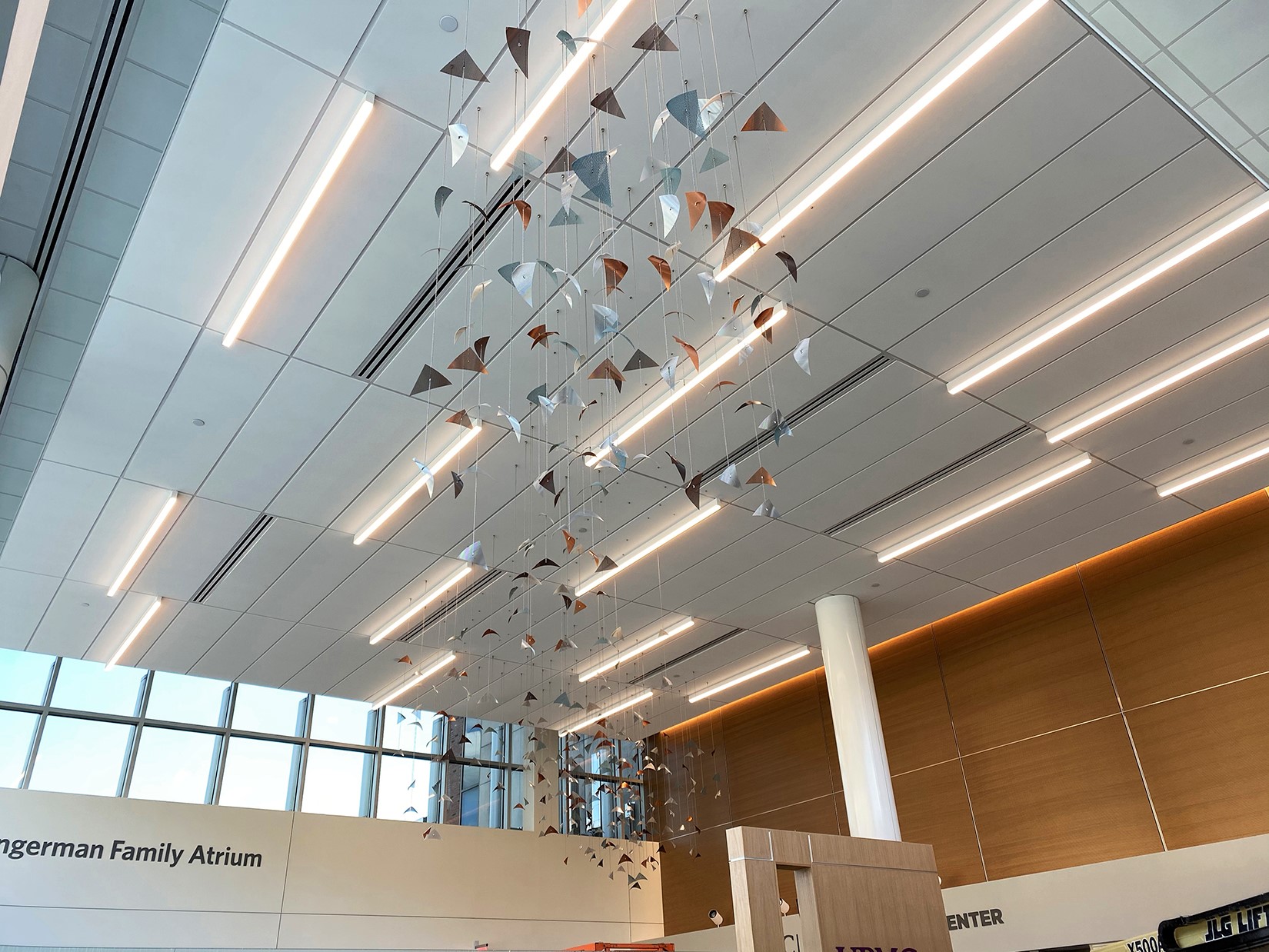 “Flight Over the Susquehanna” shimmers in the natural light of the lobby of Hillman Cancer Center on the UPMC Susquehanna Health System’s Divine Providence Campus in Williamsport, PA. Composed of hundreds of suspended metallic and powder coated triangular elements, it is inspired by summer days as a child playing in the Susquehanna River. The piece bears a similar design to “Susquehanna Reverie”, which the artist installed on the UPMC Williamsport Main Campus in 2014. The sculpture is meant to unify the two campuses and create a healing environment within the Cancer Center. Perforated aluminum elements hang from stainless steel bead chain and reflect the light of the bright lobby. The anodized pieces are joined by accents of blue powder coated elements inspired by the color palette of the hospital expansion. The composition of the sculpture was directed by the architecture of the space, which features a modern, open stairwell and an abundance of natural light. Supplemental lighting was installed to make sure the piece is well illuminated, especially for nighttime viewing from the exterior of the building.

The client was interested in a suspended sculpture for the hospital expansion that embodied flight and would help to fill the two-story lobby and create a unique space for healing. The sculpture was to be a companion piece to a previous sculpture by the artist on the nearby main hospital campus. The piece was integrated into the architectural design of the lobby to be enjoyed by those in the waiting area and those ascending the open staircase below.

Working closely with Felisa Armento of The Art Partnership, the artist developed the design using architectural drawings as reference. The colors were chosen to complement the interior design finishes of the site as well as integrate elements of the artist's previous work on the main hospital campus.

The artist was brought onto the project before the completion of construction of the site and was in close contact with Ausley Construction to make sure the ceiling could support the suspension points. Under the artist's recommendation, plywood was installed behind the drop ceiling tiles to allow the suspension hardware to be drilled directly into the acoustic ceiling, which allowed a secure and seamless way to suspended the 150+ lengths of bead chain and aluminum elements.

The installation occurred in two stages due to the construction timeline, with the ceiling hardware being installed first followed by the sculpture after the building was active. The entire sculpture was assembled in the artist's studio beforehand and a team from UPMC was on site to aid in load-in, which allowed the final installation to occur in just two days. The spotlights for the art were installed while the artist was on site to make the sculpture was properly illuminated.