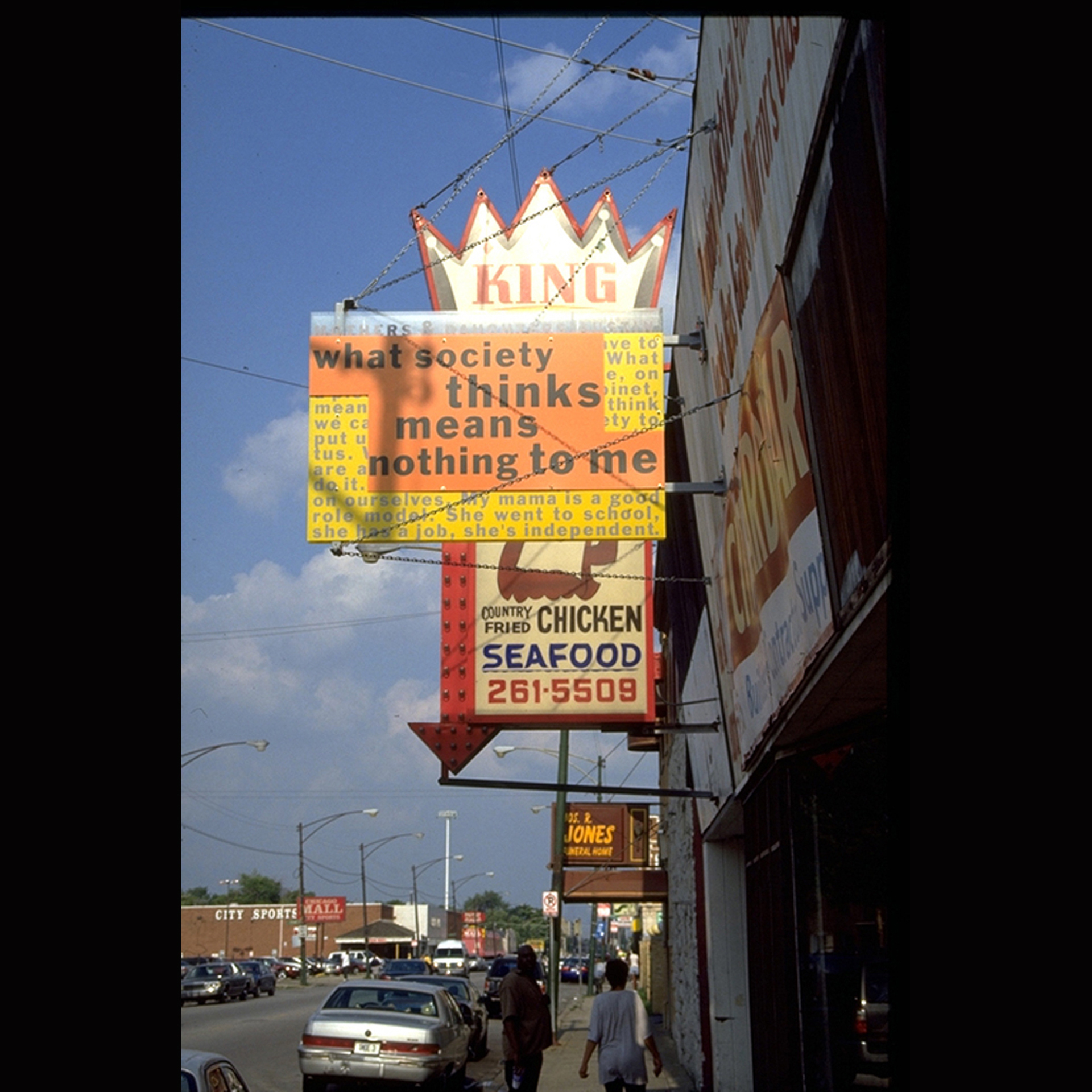 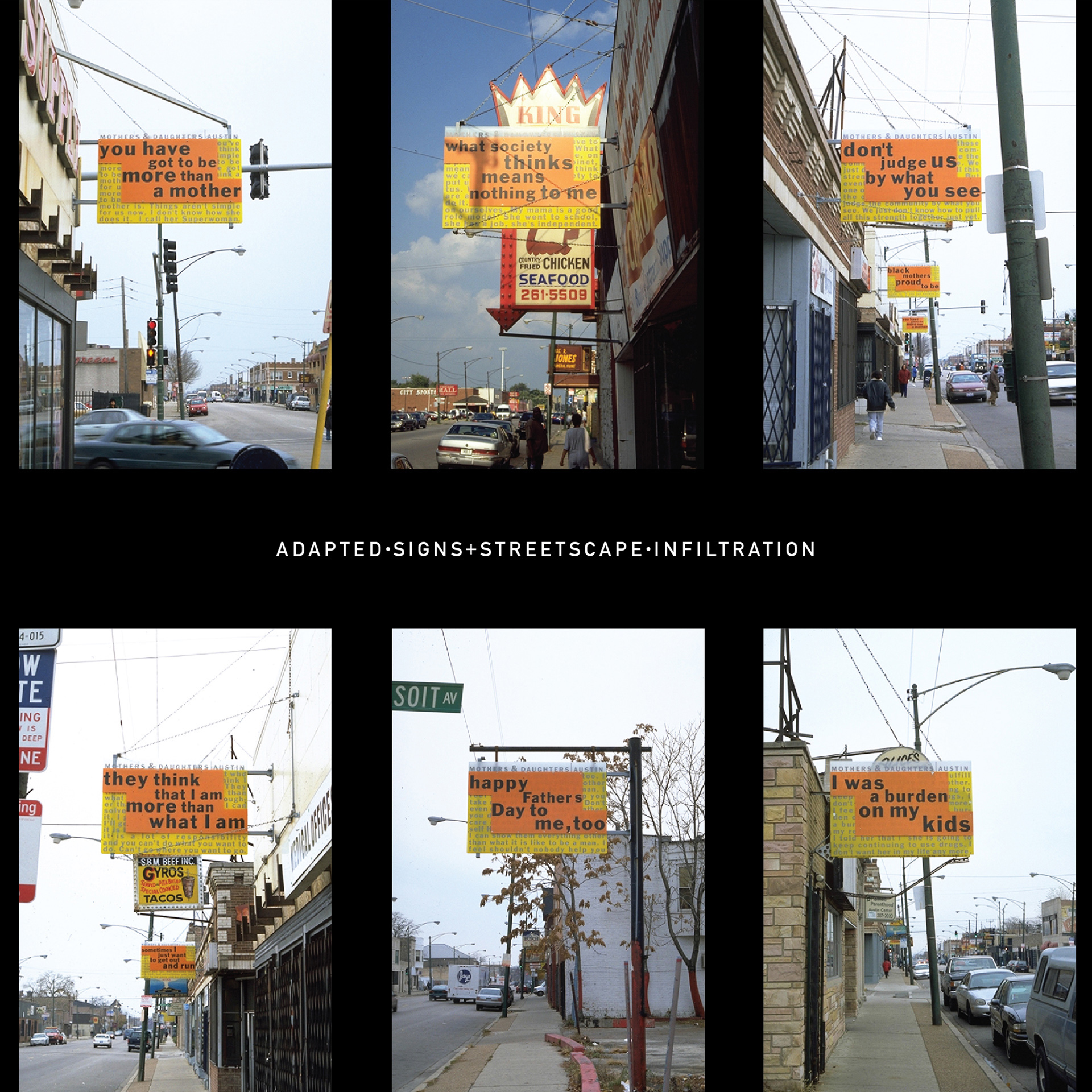 Client: National Endowment for the Arts

The Chicago Department of Cultural Affairs

The National Endowment for the Arts

Infiltrated sign structures speak for the community. This public design program appropriated and adapted abandoned sign structures atop small businesses along the Chicago Avenue streetscape. To draw attention to the stereotypes of the outside community, it collected and articulated the public voice of a largely invisible, multi-generational community of mothers, daughters and caregivers in this inner city Black neighborhood. An assertive act of interjection into the urban landscape, the double-sided sign structures carry large-scale declaratives – readable from cars passing through – which primarily speak to the outside community. Layered beneath and extending below are longer statements – directed to local pedestrians – which primarily speak to the community itself. The declaratives read as highlighted sound bites, appropriating a mass media. Constructed of aluminum structural forms; corrugated polycarbonate and plexiglas; die-cut viny. Dimensions: 6’W x 4’H (typical sign panel).

Initiated and implemented by an NPO; funded by the NEA and the Chicago Department of Cultural Affairs & Special Events; the general objective was to make visible a multi-generational group of women and girls who are largely invisible to the outsiders who commute on Chicago Avenue from affluent Oak Park. We surveyed property owners (often absentee landlords) and the local businesses, churches, schools and NPOs, to identify community participants, assess the state of sign structures, and to gain permission to install this activist sign program. Although our intention was to infill the visual and functional landscape of existing sign structures along a four-block streetscape, we ended up fabricating and installing a number of new sign structures that could eventually be adopted by the small businesses in the district.

This project was an initiative of Community Architexts, our NPO in Chicago that deployed inscripted languages on constructions and activations in Chicago and the Midwest. Community outreach was initiated and carried out by the NPO’s studio manager, to identify groups of participants ¬– five multi-generational groups of women, girls and caretakers in the inner city Austin community on the West Side of Chicago. Participants met in their age-specific groups to discuss their feelings about the responsibilities of family caregiving and the perceptions that outsiders have of them in that role. Sessions were recorded and transcribed; participants self-selected to come together in an editing group, to select the most resonant statements and phrases to be highlighted and made public in the community. We designed and produced the sign program, fabricated and installed by HK Signs in Chicago. To an extent, this was a guerilla operation. It was intended as a temporary site activation; we didn’t bother getting permits from the City. The program of 10 signs just appeared overnight and slowly disappeared over the following weeks and years.

This project involved the usual levels of negotiation, compromise, and frustration. The generous collaborative participation of a local summer program, middle school, social services agency, substance abuse shelter and retirement home led to our wide age range of participants. In this early digital environment, they reveled in the public manifestations of their statements and opinions, when the physical streetscape was still an important communication infrastructure.