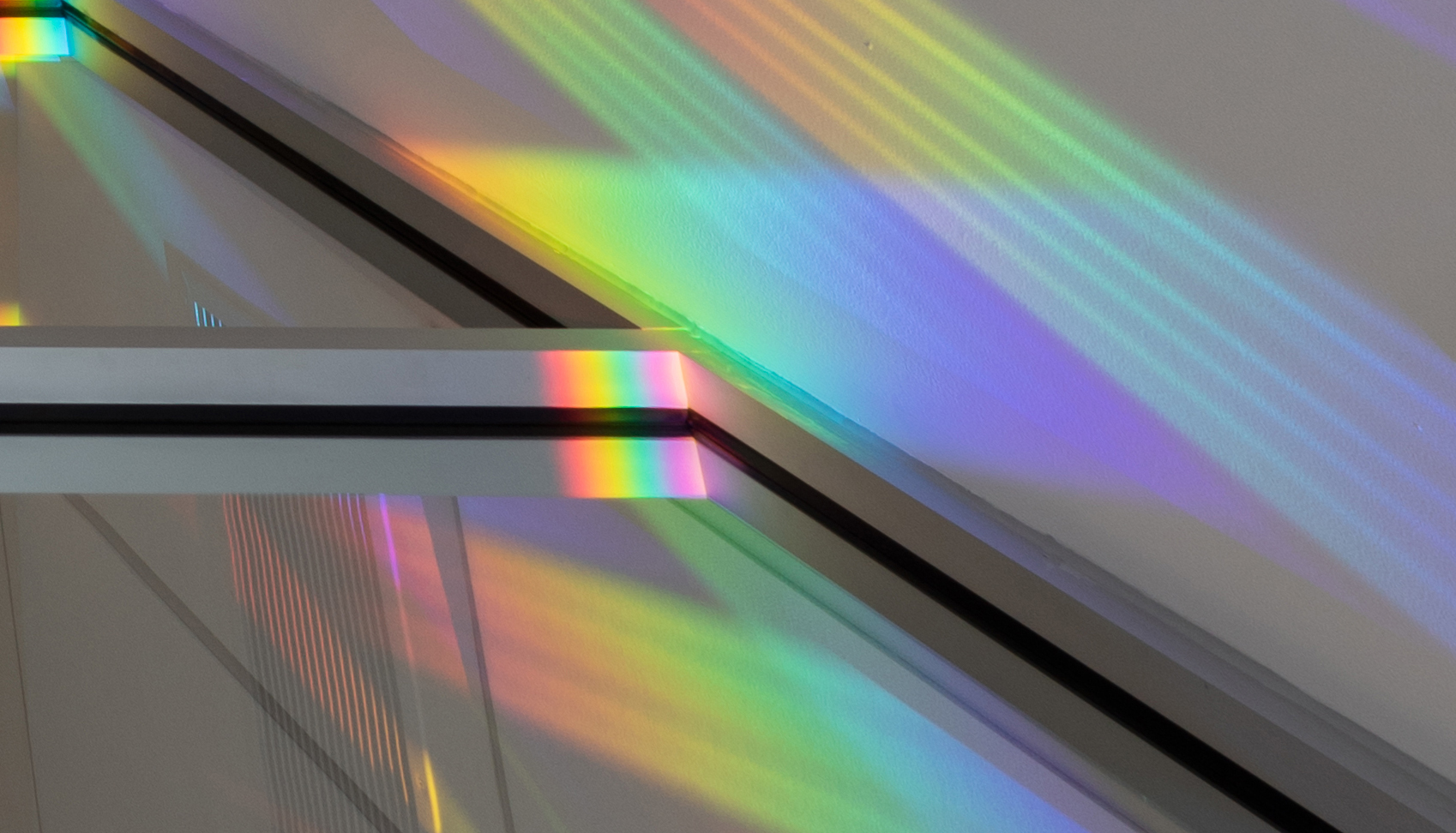 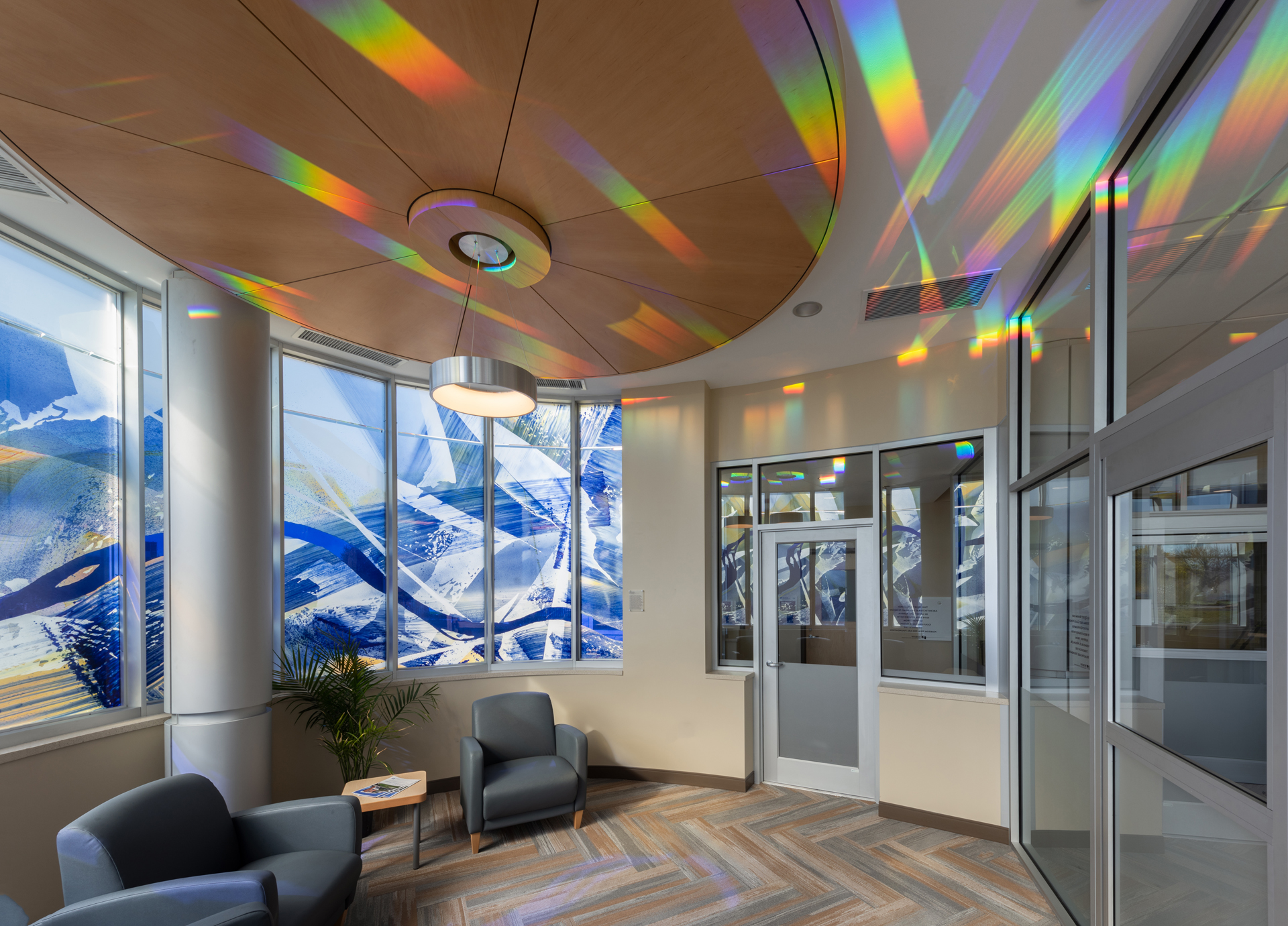 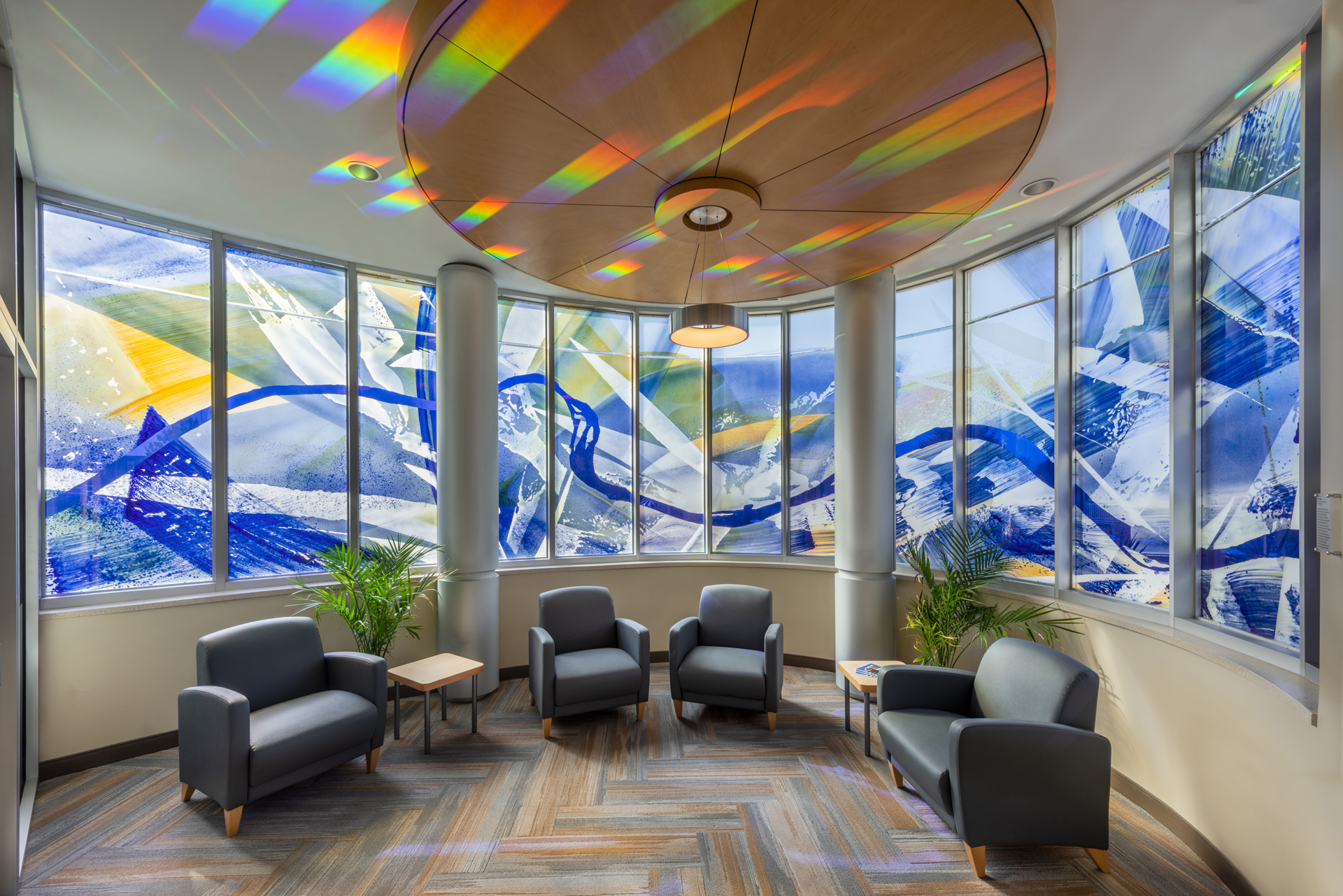 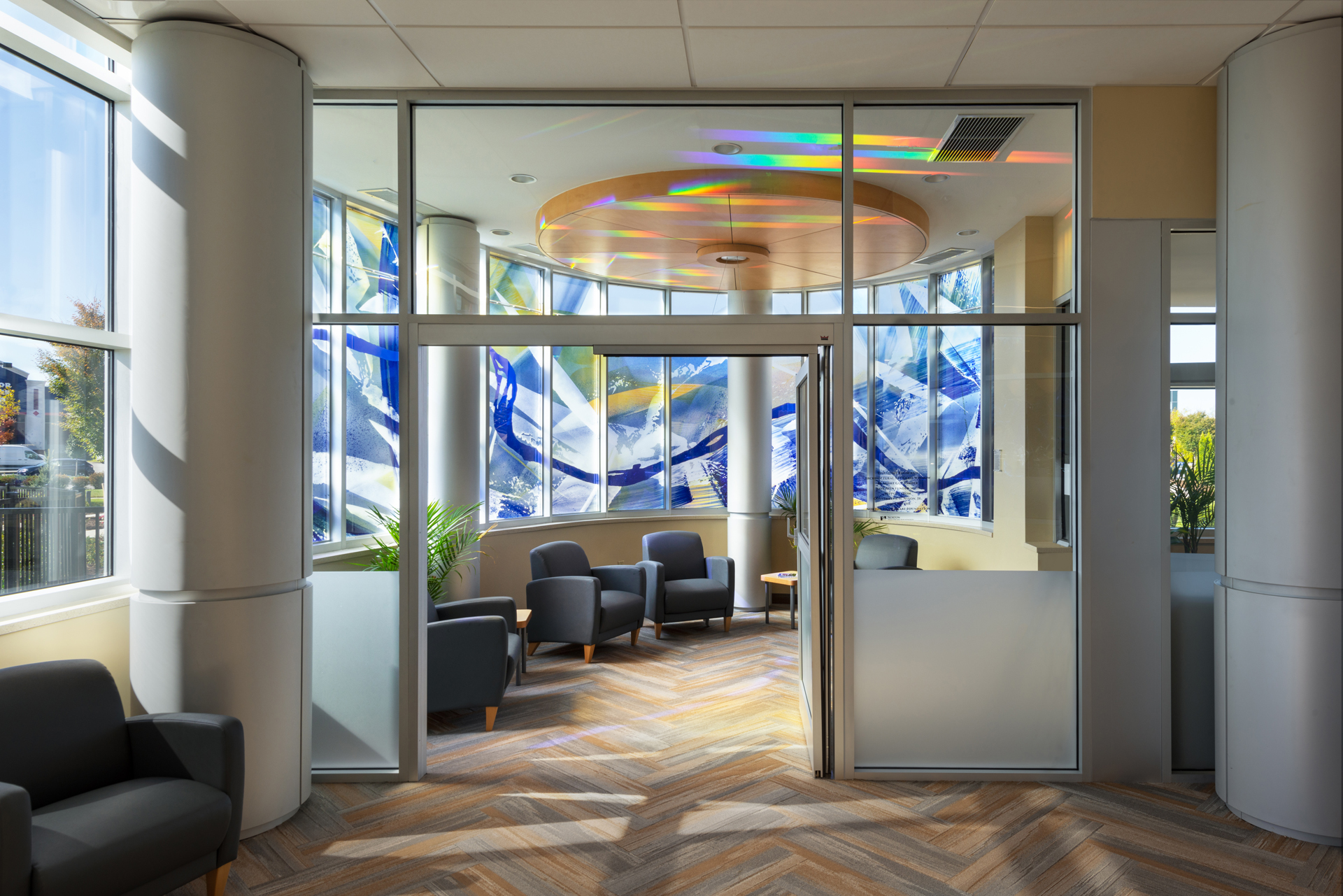 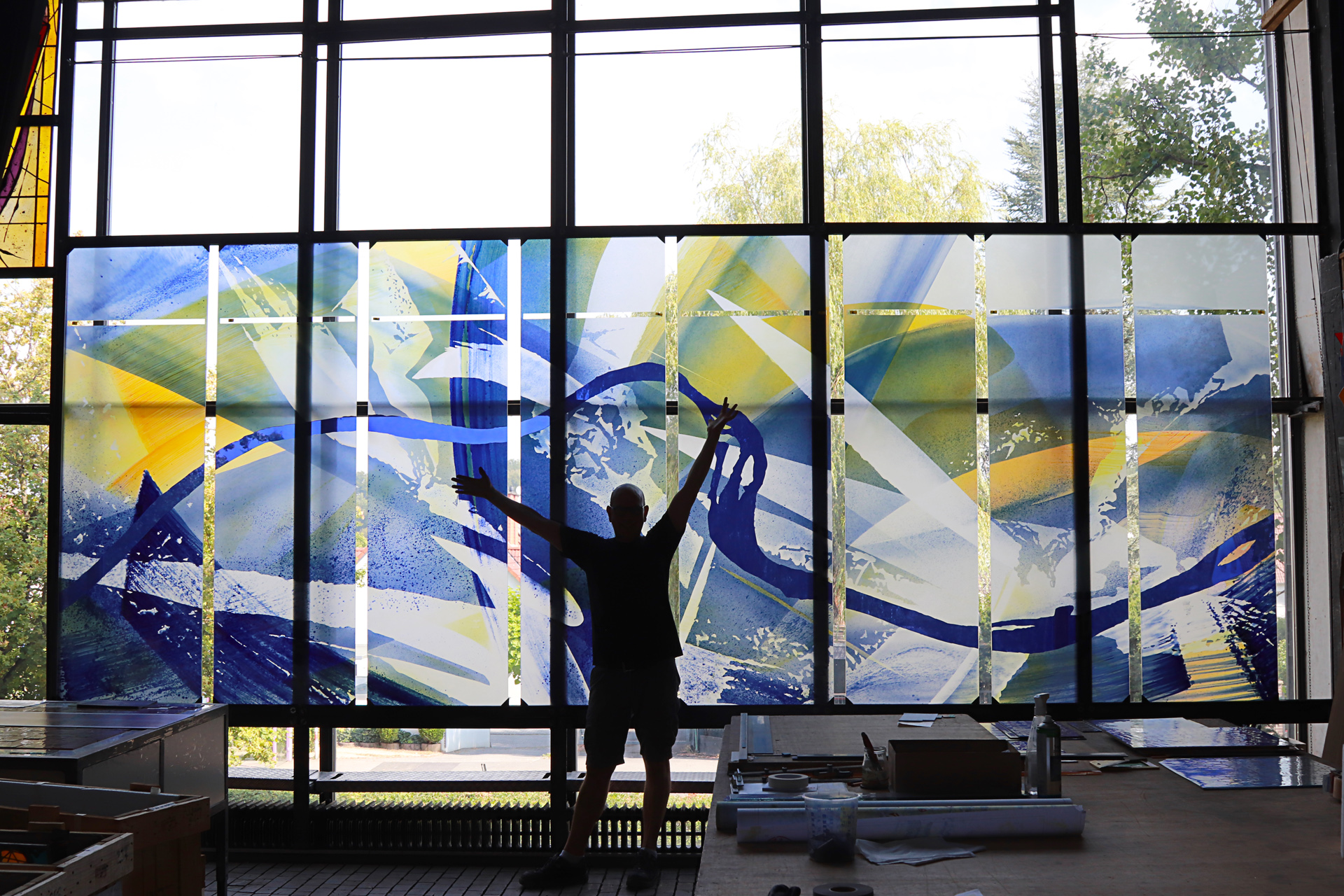 Window for a meditation space, conveying the power of splashing water and light, showering the building with ever-changing rainbows, bringing, strength and rays of hope.
The Falls of the Ohio is an enormous waterfall near Louisville. Because boaters had to portage around it, the city began there. It makes one feel small, like there is something greater and mysteriously beautiful beyond oneself. The prisms are for strength and rays of hope.
7’- 8” x 31’- 8”. Fired vitreous enamels on tempered glass, sandblasting, prisms.
Fabricated by Derix Glasstudios

The intent was to create a place that was beautiful and reassuring for this outpatient cancer treatment center, with imagery that was locally inspired. The circular shape of the room, with an east- west orientation to the south, was a perfect opportunity to use prisms, which cast rainbows everywhere through the space. Rainbows are good omens. It is hard to be sad when you are bathed in rainbows.

The first act of collaboration was halting the exterior glazing order, which was heavily tinted and would have adversely affected the art, replacing it with clear uv-coated glass. Derix Glasstudios, the fabricator, already pressed with a tight schedule, agreed to move the installation date up to accommodate a bike for cancer event. They also figured out how to best translate a very complicated painting into glass. The hospital design team suggested it would be nice to see a garden outside, so I made the river transparent, which made the artwork better. Place names were removed from the design at the suggestion of Dr. Joseph Flynn, the Cancer Center chief, which was another improvement. The general contractor was extremely collaborative as well. For example, they offered to store the crate if it arrived early, offload it with their forklift, and move it to the installation site, simple acts of cooperation that are becoming increasingly uncommon.