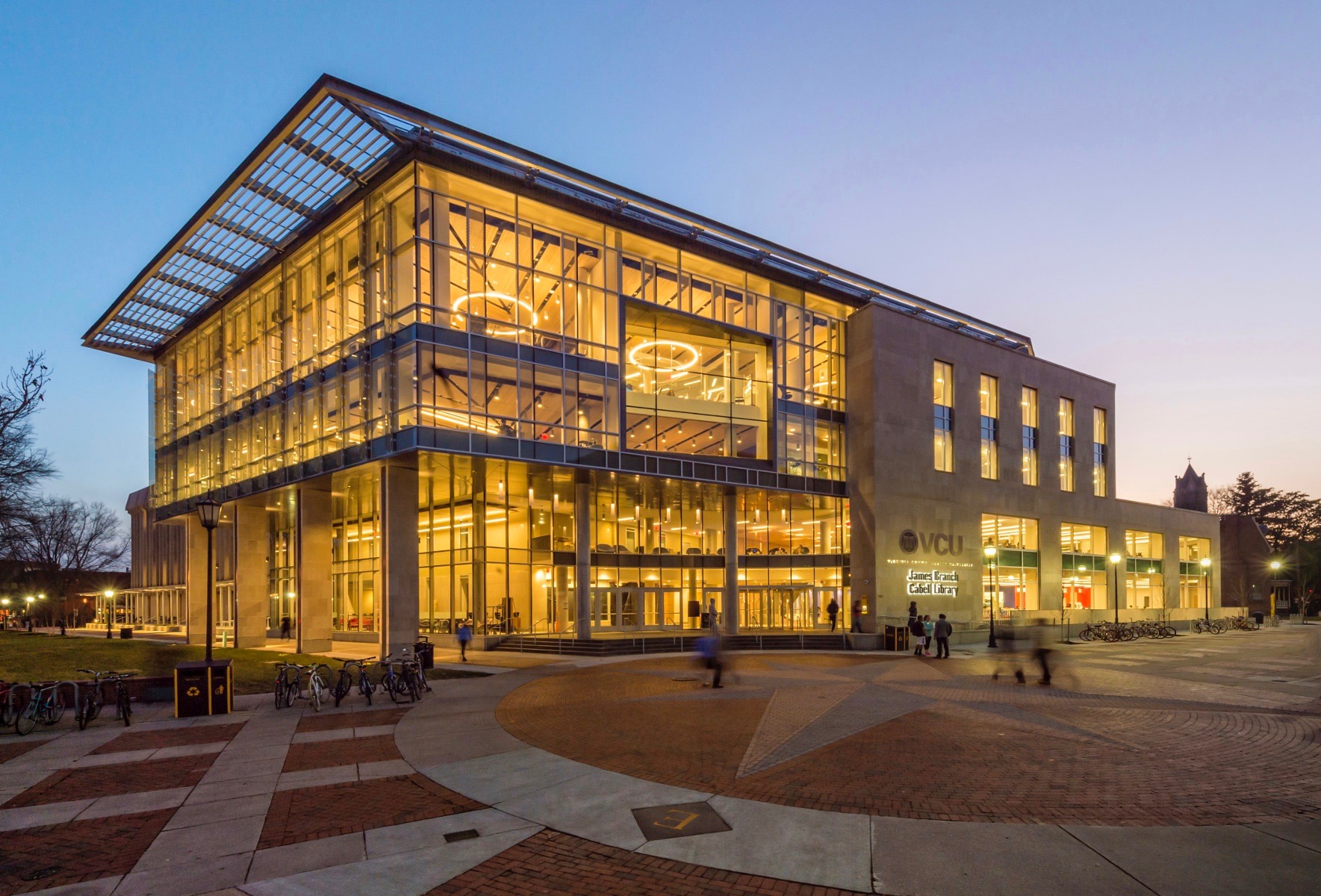 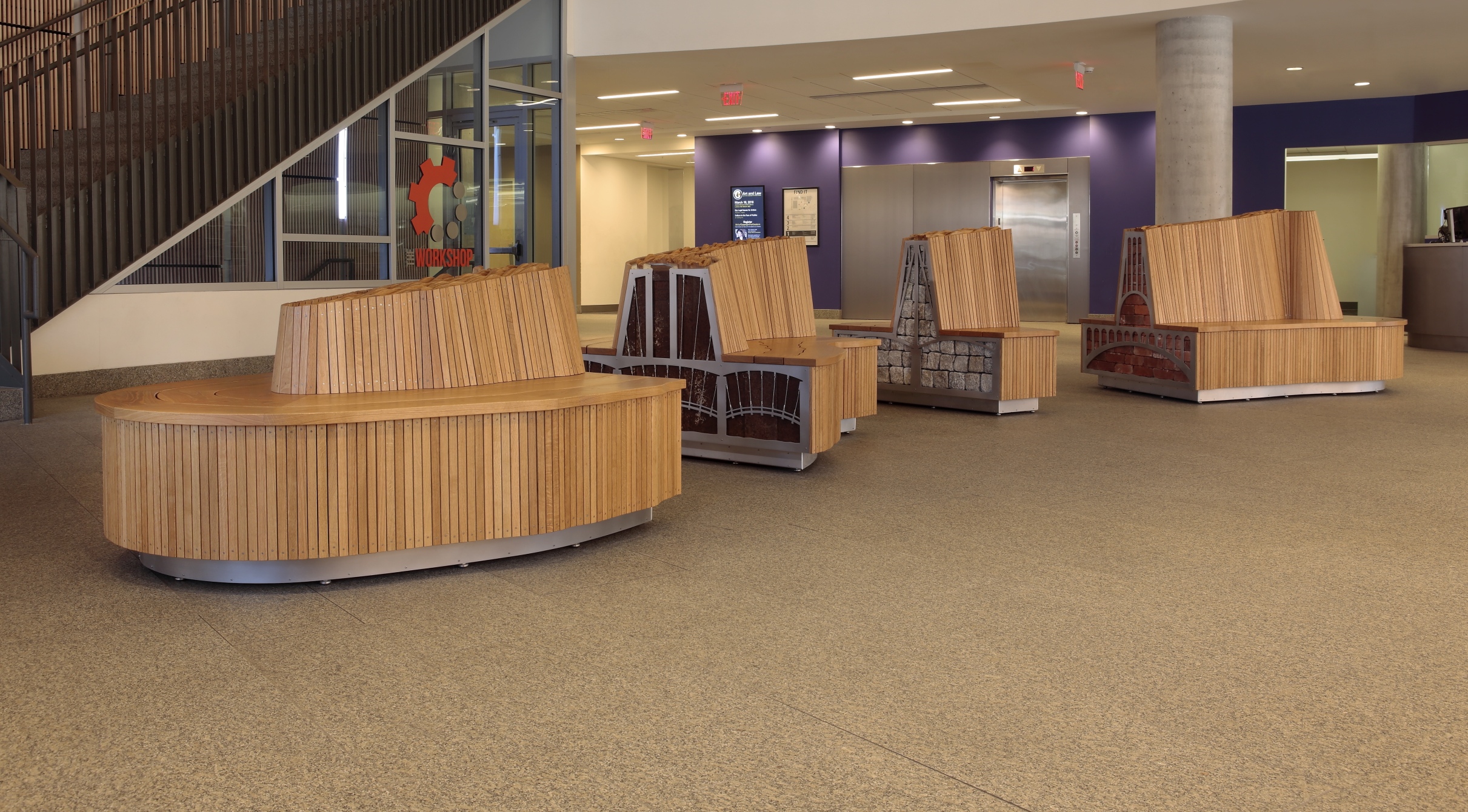 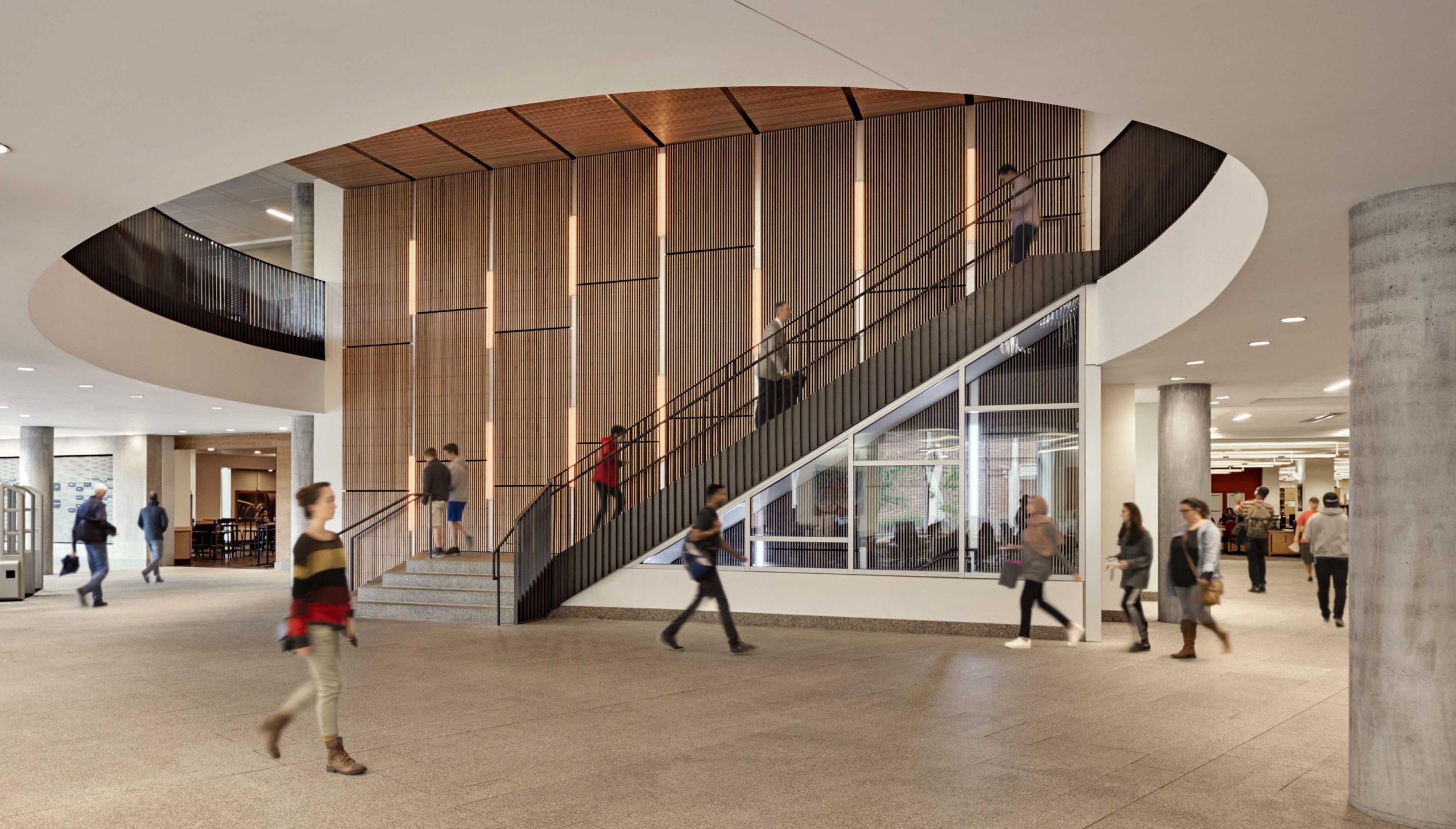 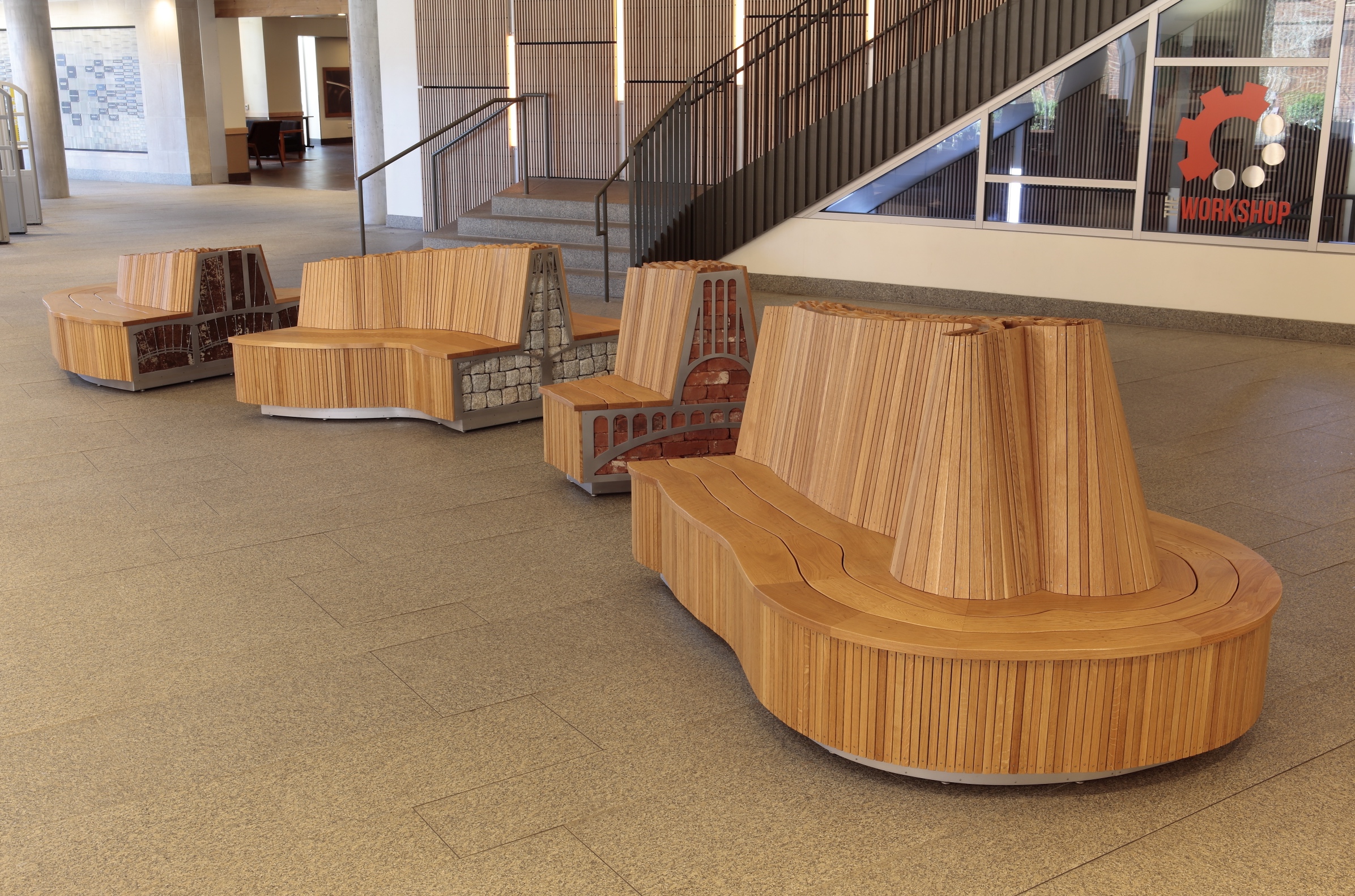 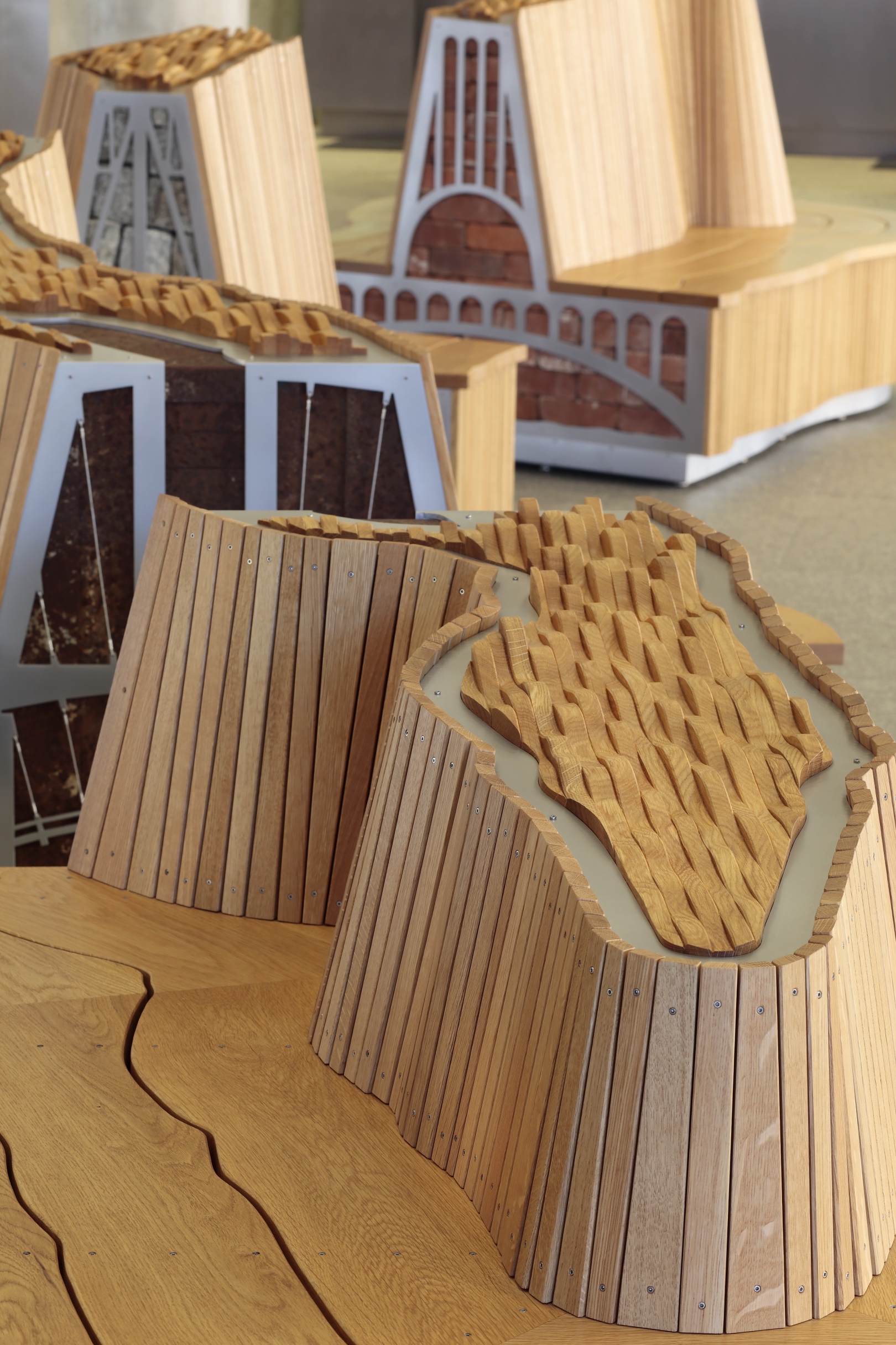 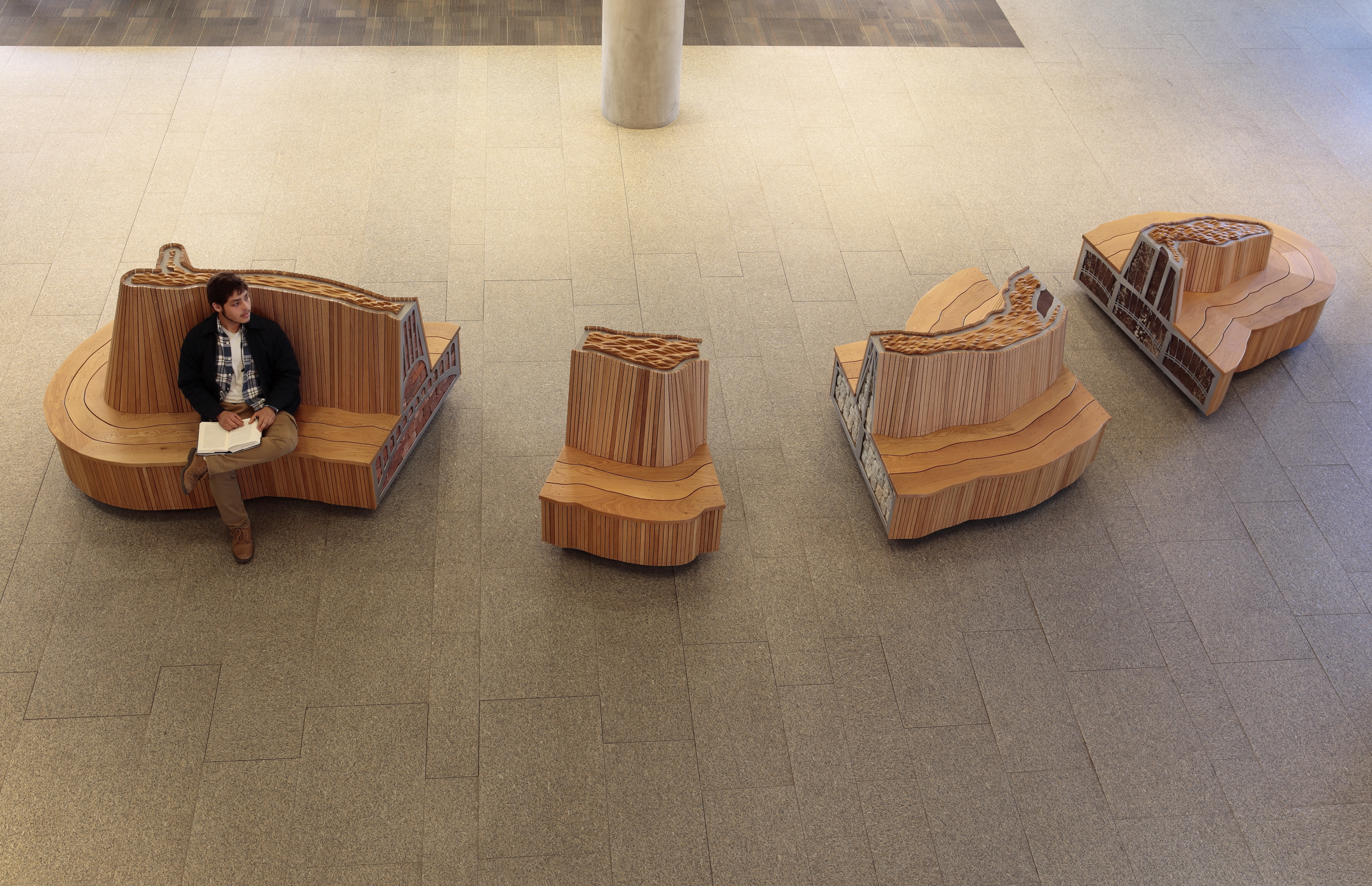 ‘Fall Line’ is a 27ft. long sculpture/bench positioned in the entryway of the Cabell Library, at Virginia Commonwealth University. Inspired by the James River and the City of Richmond, the piece brings a key feature of the city, the river, into the library. Constructed of white oak, and divided where bridges cross the river, the bench consists of four sections, allowing students to flow through. Each pass-through offers an abstracted representation of the corresponding bridge, as well as industrial materials synonymous with Richmond. ‘Fall Line’ connects outside with inside, natural with urban, and the community of Richmond with the university.

Opening in January 2016, the architectural re-design of the James Branch Cabell Library shines as a central beacon on Virginia Commonwealth University’s Monroe Park Campus. Used by thousands of students, faculty and staff a day, the technologically savvy Cabell Library is one of the regions’ largest research institutions and welcomes the diverse student body of VCU and the vibrant local community.

Walking through the revolving doors of the entryway, each library visitor is greeted by an expansive, multi-storied, atrium space with mezzanine work spaces above. The semicircular open-space, with its grand staircase on the left and granite floors, presented the perfect venue for a signature piece of public art.

The goals of the commission were to provide a functional piece of public art that would act as a story-telling device and help unify wide cross sections of VCU students and Richmond residents. By offering a well-designed and finely wrought object for visitors to experience as they walked through the front doors, as they rendezvoused with friends, peers and colleagues and then again as they left, ‘Fall Line’ would create an intuitive meeting point and create a lasting impression of the Cabell Library, of Virginia Commonwealth University and of Richmond.

This collaboration began in August 2013, at VCU’s annual opening ceremony; the Faculty Convocation. Following a discussion with Associate University Librarian Jeanne Hammer, where I outlined a recent public commission, titled “Library Stack 1.25,” that I completed for the Madison Public Library, in Madison, Wisconsin (which also became part of a CODAworx project), I was asked to present public art concepts, to the library’s administration and interior design team. At the time, the James Branch Cabell Library was in the planning phases of the architectural re-design of their building with architecture firm Shepley Bulfinch

Working closely with: VCU’s University Librarian John Ulmshneider, Associate University Librarians Jeanne Hammer and Dennis Clark, VCU’s Capital Outlay Interior Designer Caren Girard, VCU’s Assistant Director of Capital Projects Joe Mannix, and Sara Lasseter, Lorri Finn and Kate Croy from KSA Interiors, I developed and proposed a large piece of public sculpture/seating for the library’s entryway. The piece was based on the section of the James River, known as the fall line, that flows through Richmond’s city limits. Collectively we wanted a showcase piece of functional art for the new library, that uniquely connected the James River, the City of Richmond and the Cabell Library.

It is rewarding to design and make work for dynamic civic spaces, such as the Cabell Library, that are utilized by a wide range of audiences with diverse life experiences. Also noteworthy is the amazing work from all of the studio assistants that helped see this project through to completion. Their collective commitment, skill and energy was invaluable. Thank you to all that helped.