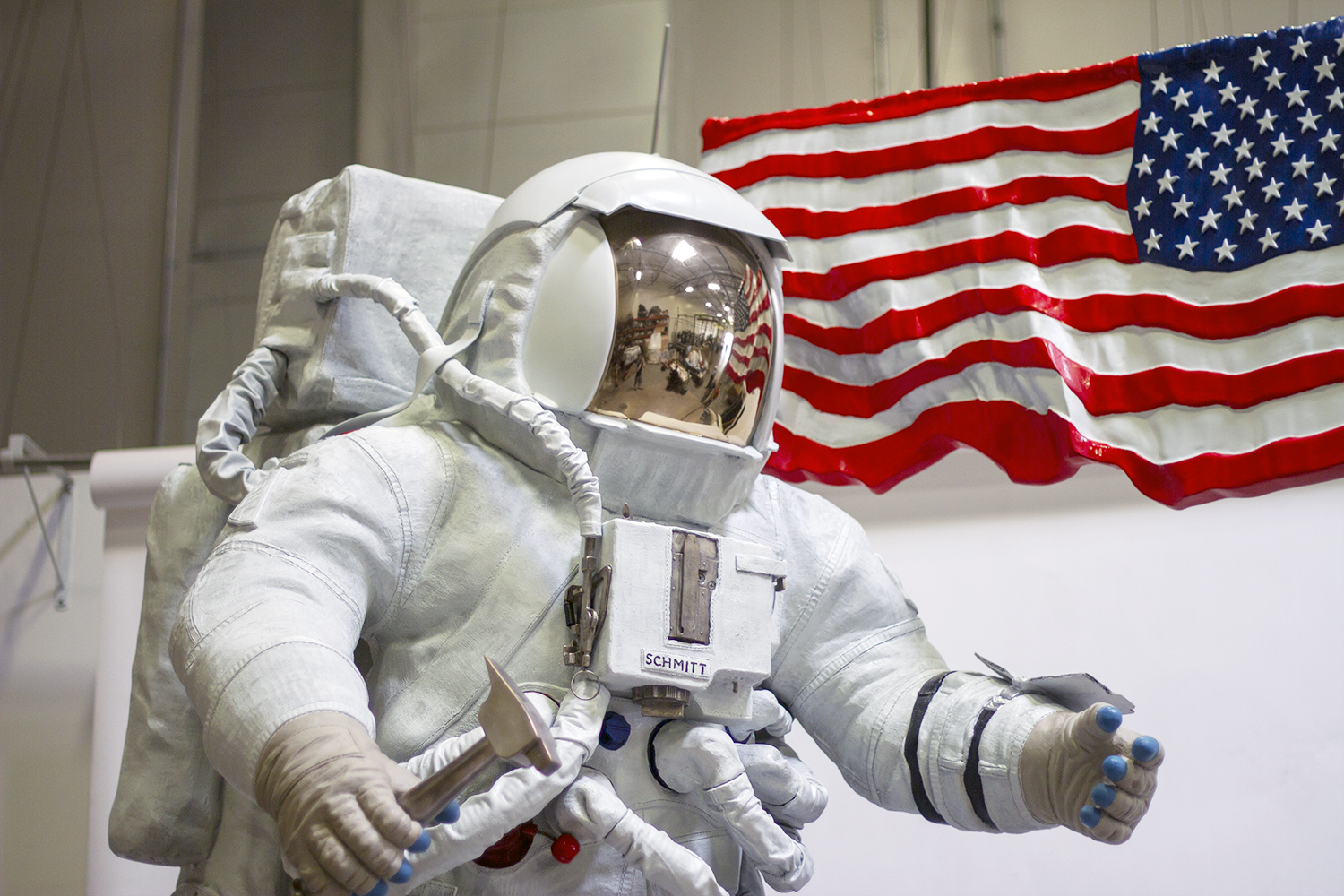 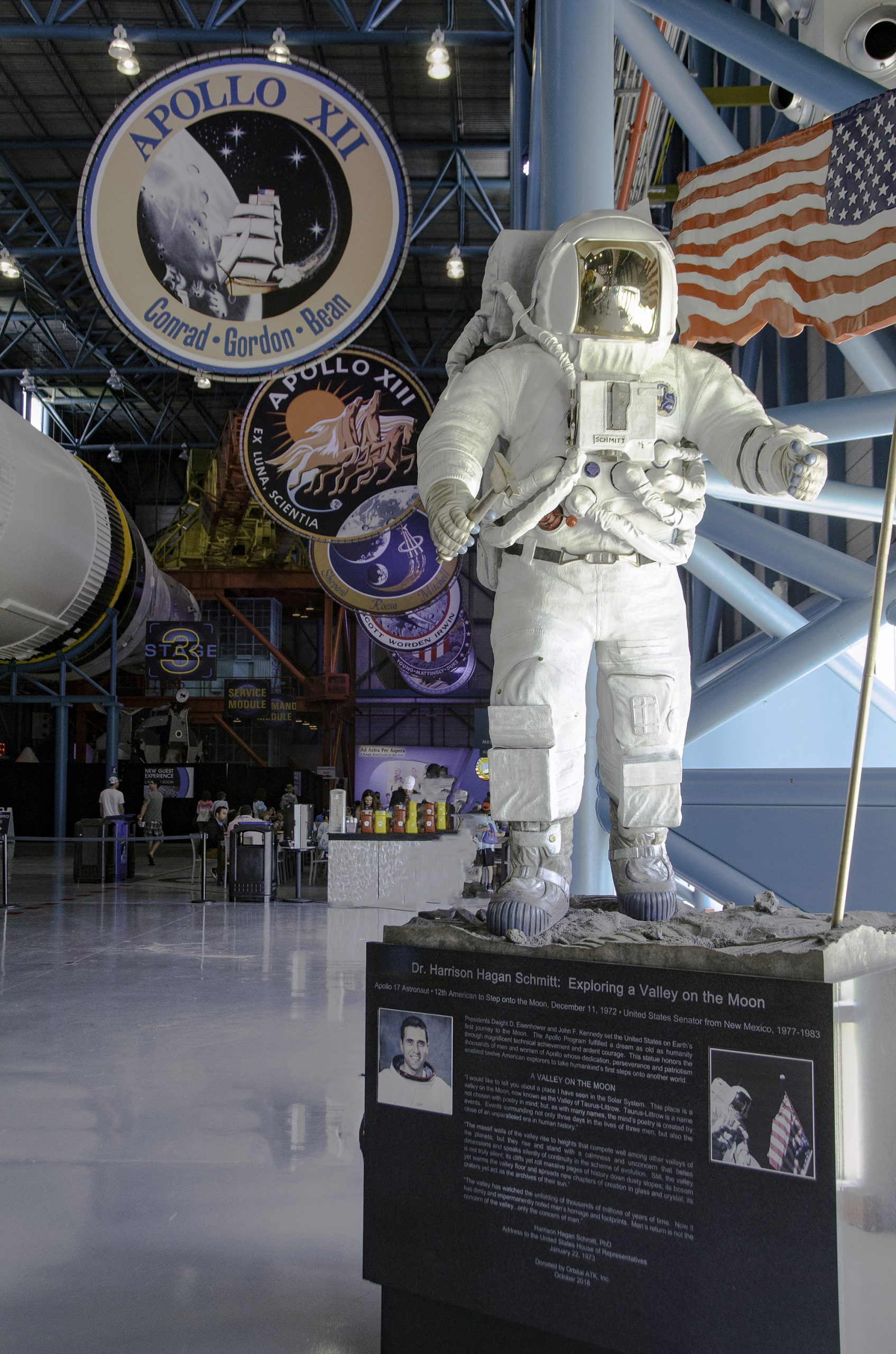 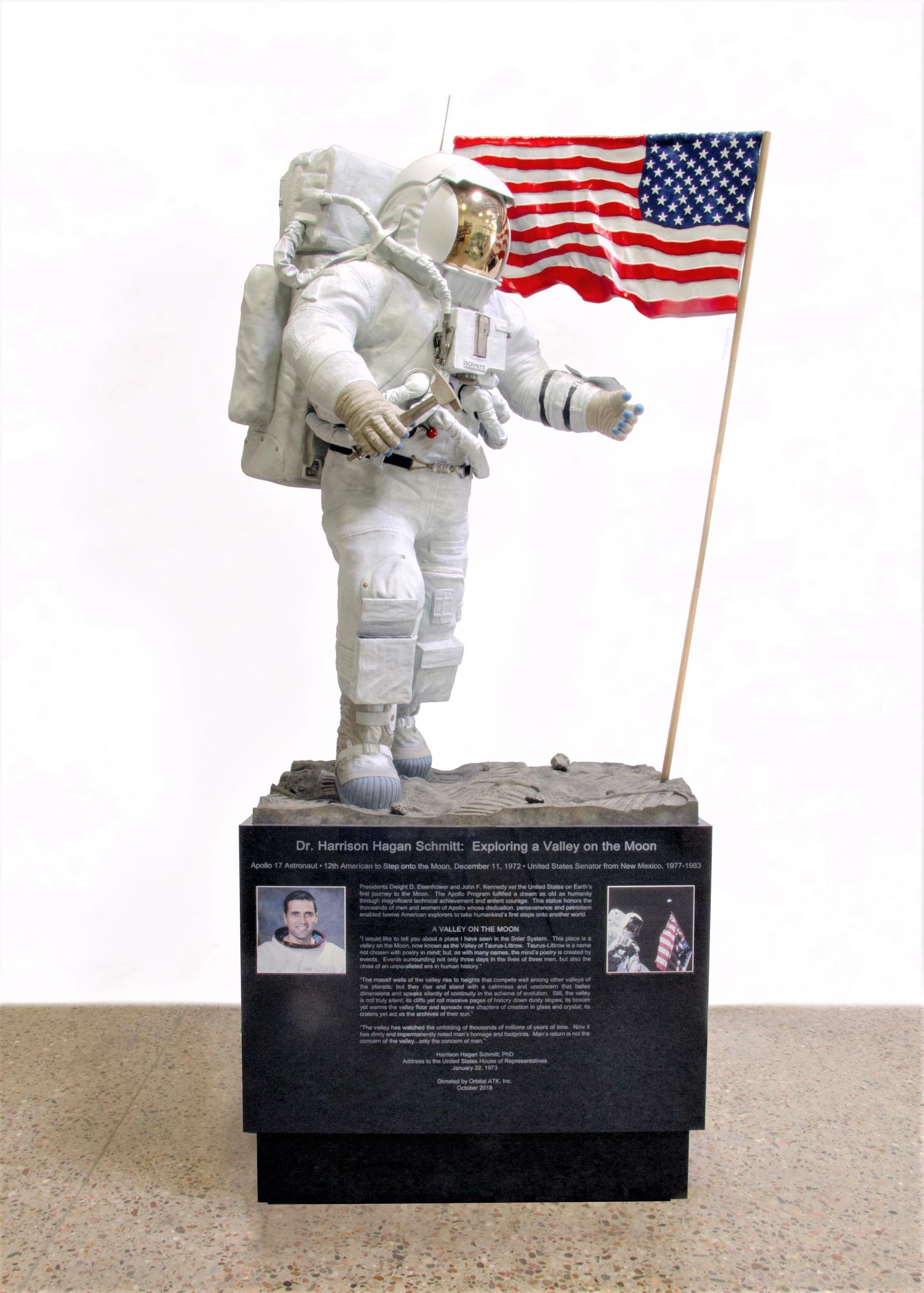 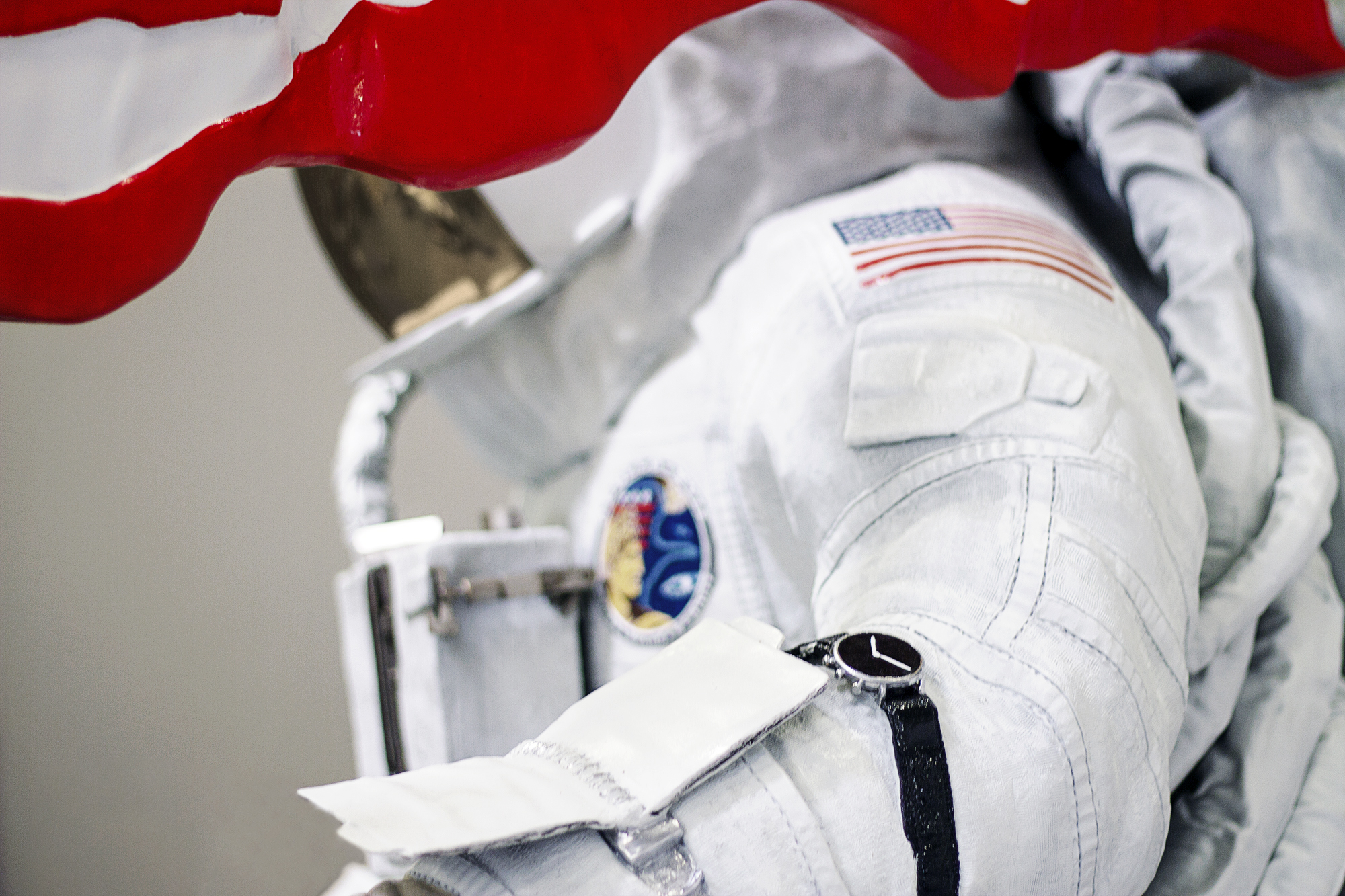 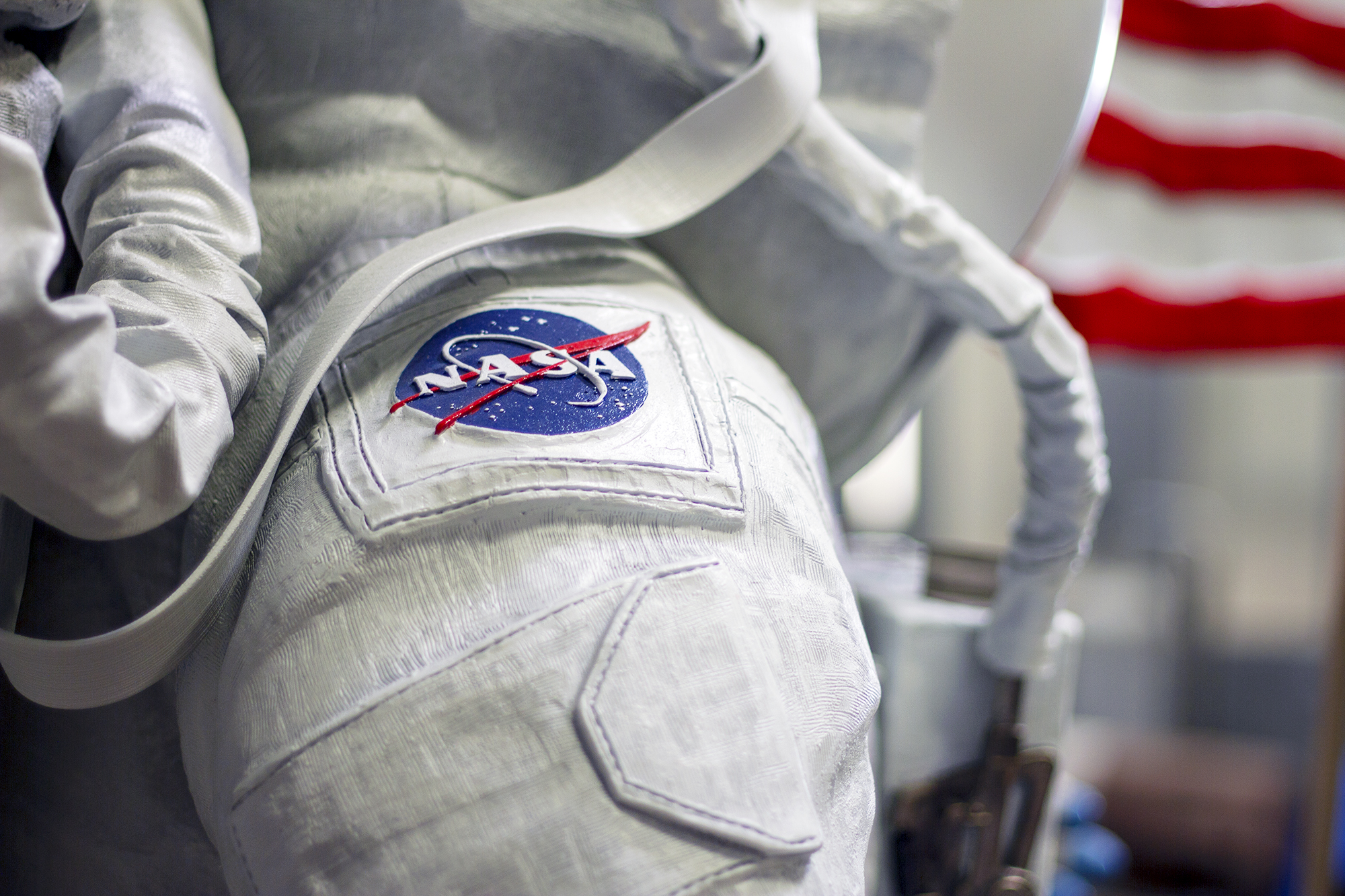 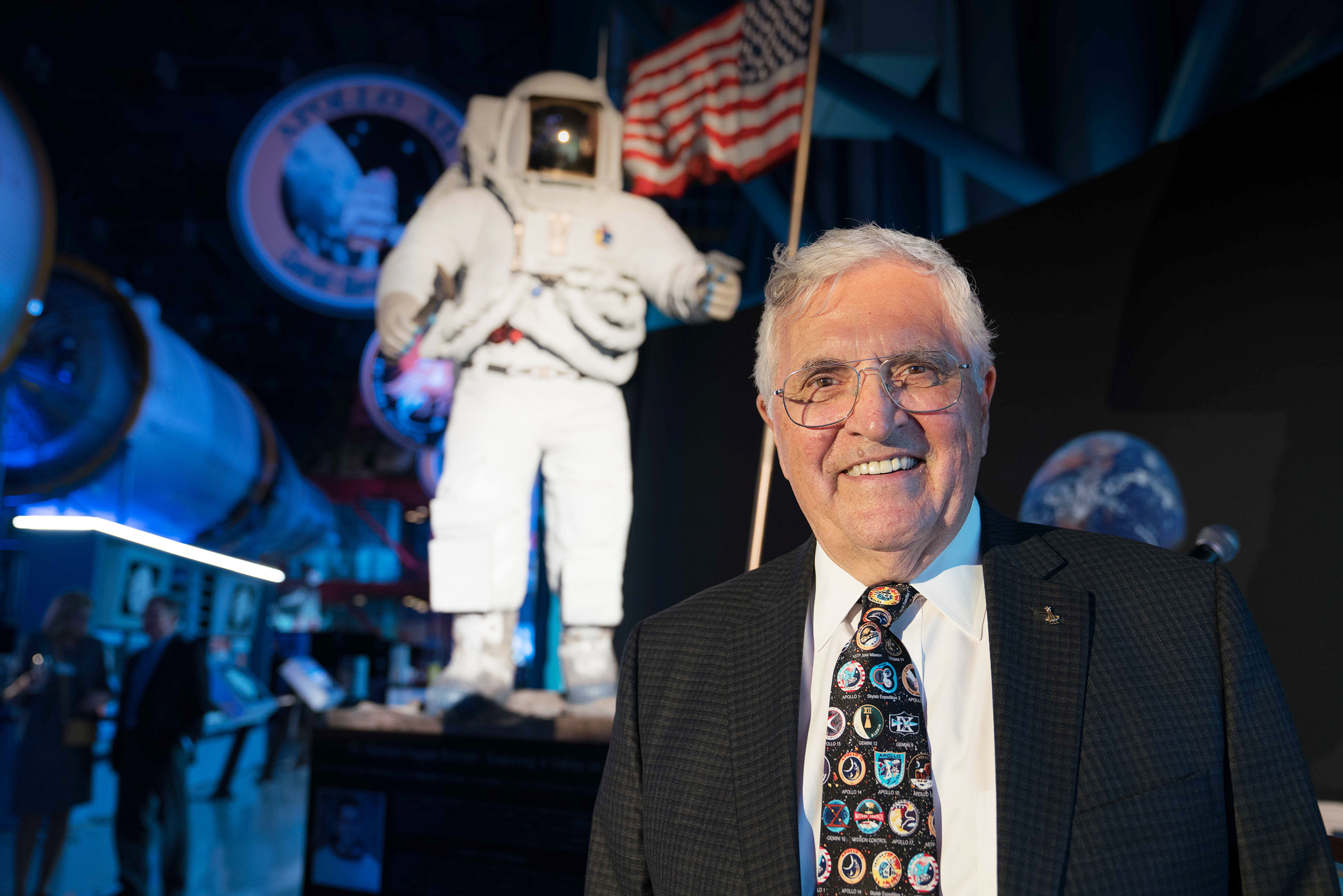 Photo: Harrison Schmitt in front of sculpture at the dedication

The scope of the project was to create a sculpture of Dr. Harrison H. Schmitt, also known as Jack Schmitt, in recognition of all that he has done for space exploration and science. Orbital ATK (now Northrop Grumman) was the company that came to us to not only cast but also sculpt and create the piece. They had a general idea of the basic composition of the sculpture when they approached us. For example, they knew they wanted a realistic, three-dimensional, representation of Harrison “Jack” Schmitt in his A7LB spacesuit, with an American flag, walking on the lunar surface. It now lives at the Kennedy Space Center Visitor Complex.

We needed the piece to be as close to 100% accurate as possible to Jack Schmitt's actual A7LB suit. A lot of our visual information came from images Jack gave us and NASA files on the mission. Jack was able to articulate details such as the positioning of the lines that were used for oxygen and water that connected the suit to the PLSS

We started with a digital 3d model and used this to refine the pose of the figure, the orientation of the American flag, and topology of the moonscape. The use of the digital model allowed us to work closely with Orbital ATK to make subtle, or often more substantial changes until the model accurately reflected the design that our client had envisioned.

Once the composition of the design had been determined, we were able to concentrate on one of the most challenging aspects of this project, which was the details pertaining to the A7LB spacesuit. Using photo references, NASA documentation, and input from Jack Schmitt, we were able to flesh out all of the finite details on the suit. Some suit details and equipment were created using digital 3d modelling and were incorporated into the pre-production 3d model, others were 3d printed and added to the full-scale sculpted prototype, and some were hand sculpted.”

For more info on this project visit our website: https://bollingeratelier.com/2019/07/23/exploring-the-valley-on-the-moon-x-bollinger-atelier/