Excelsior: Ever Upward, Ever Afloat - CODAworx 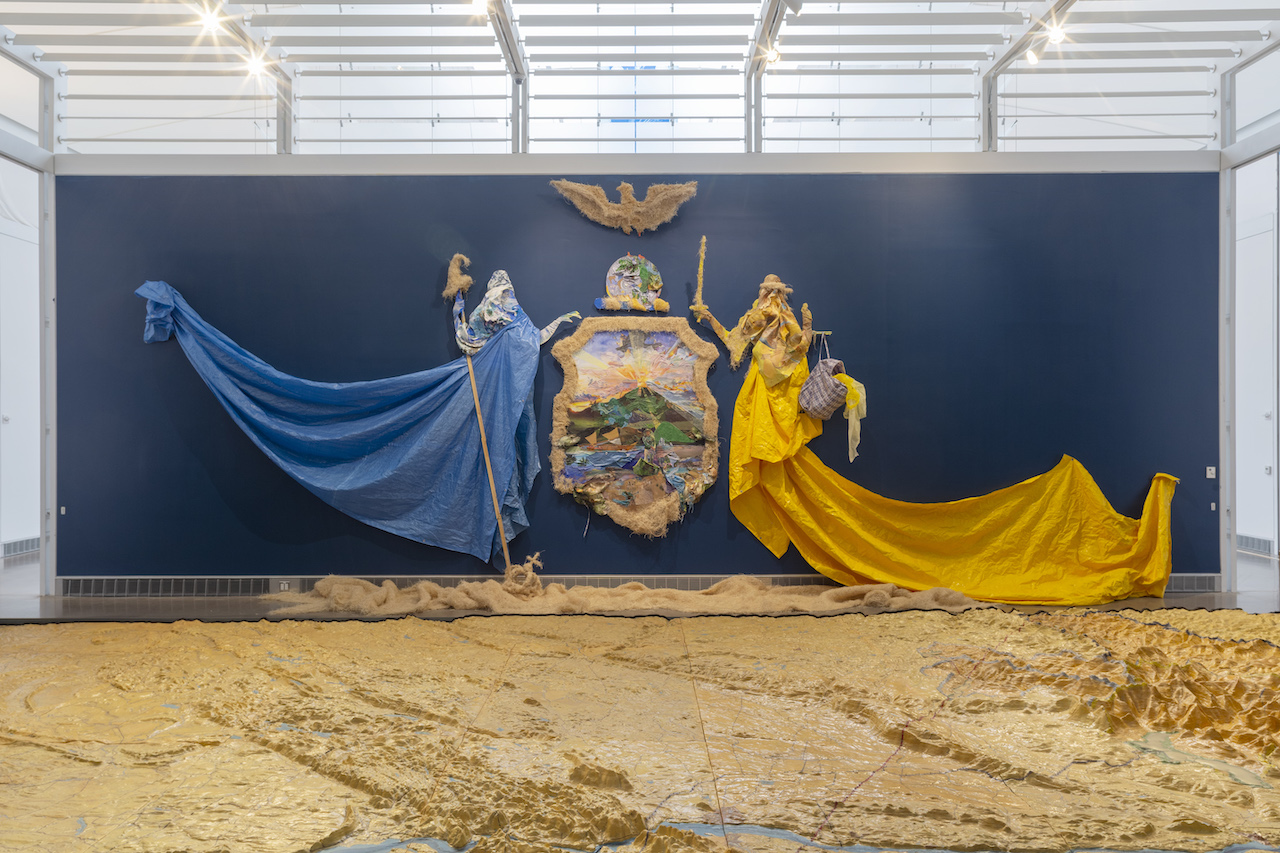 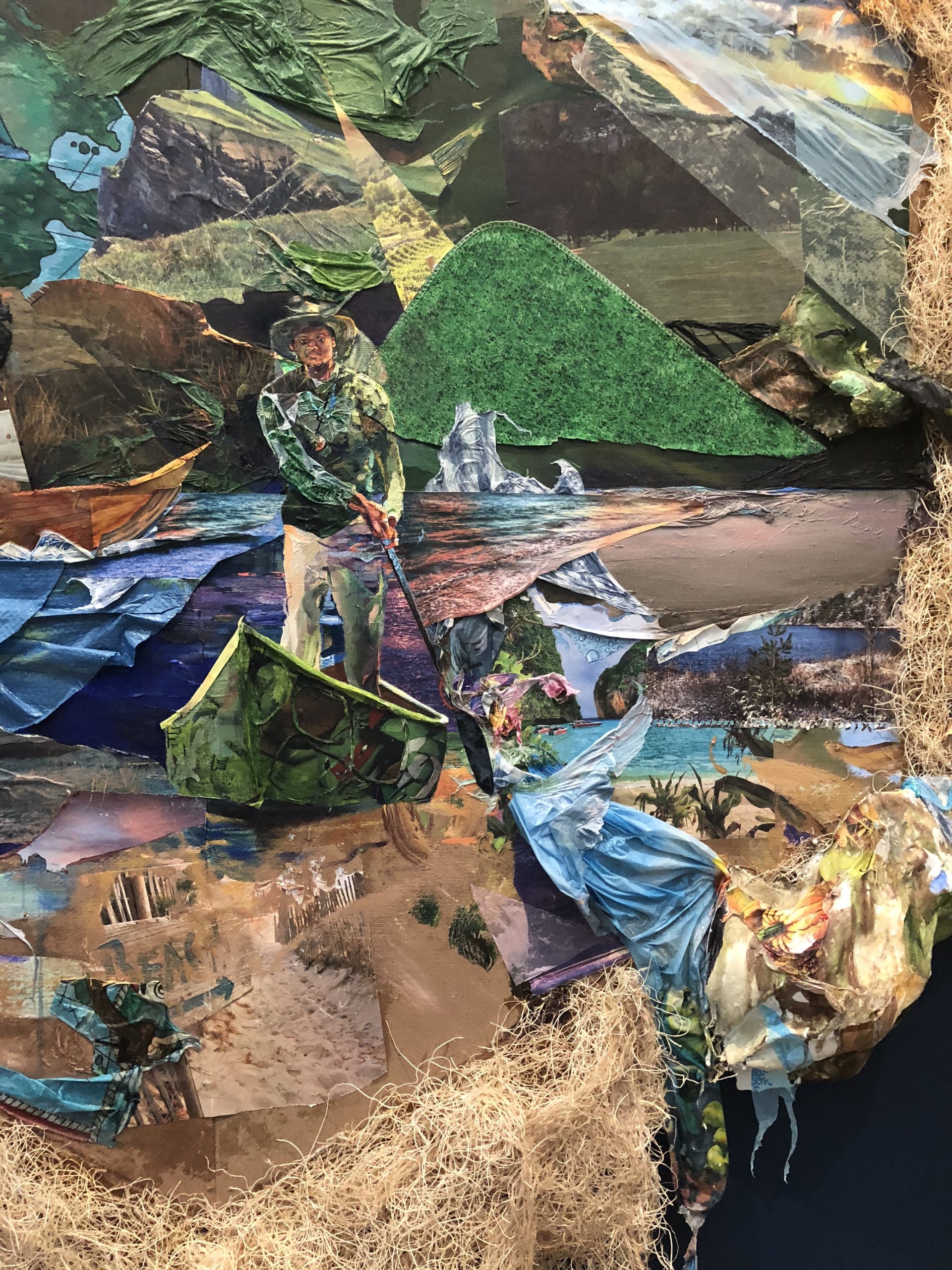 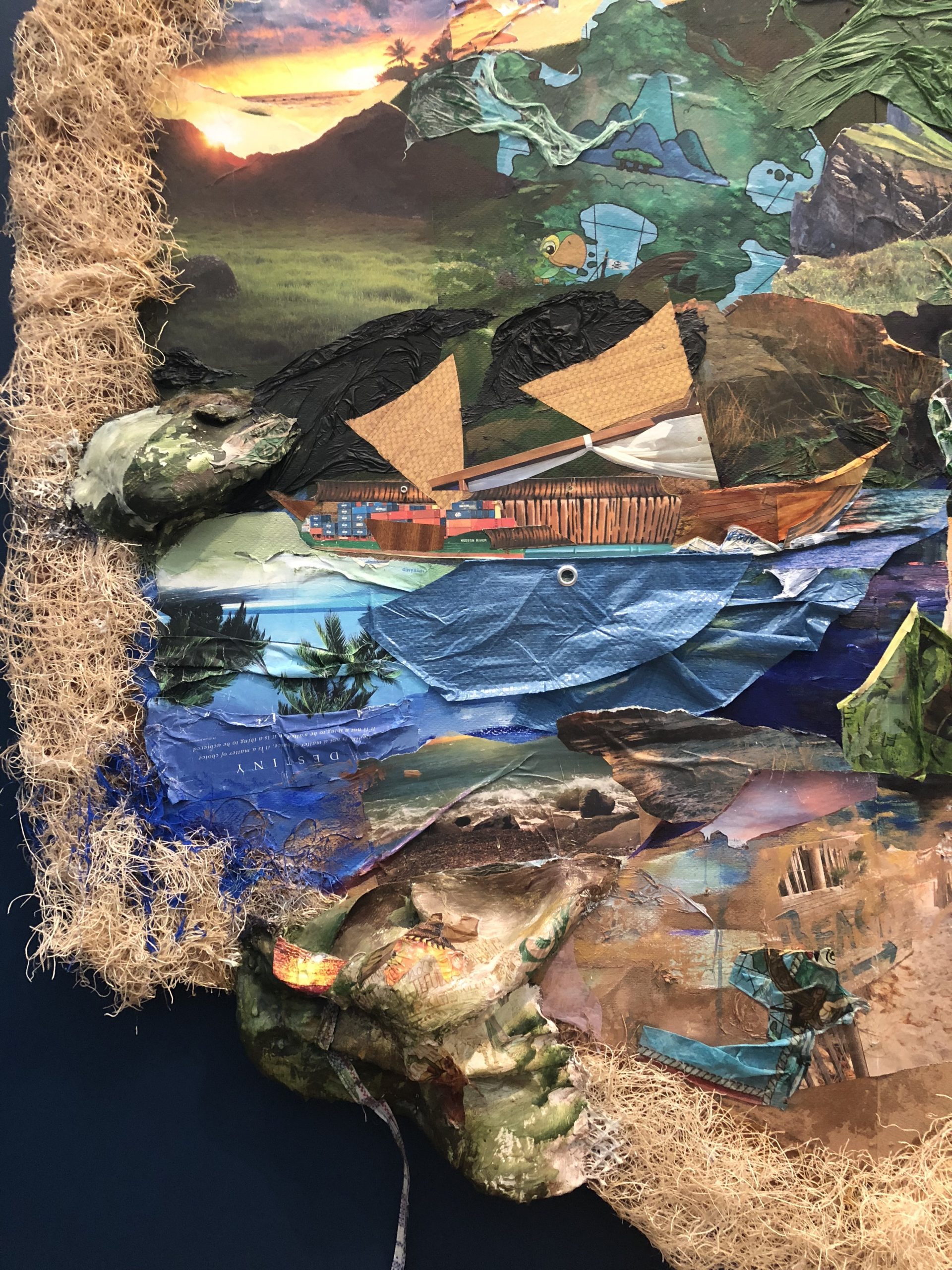 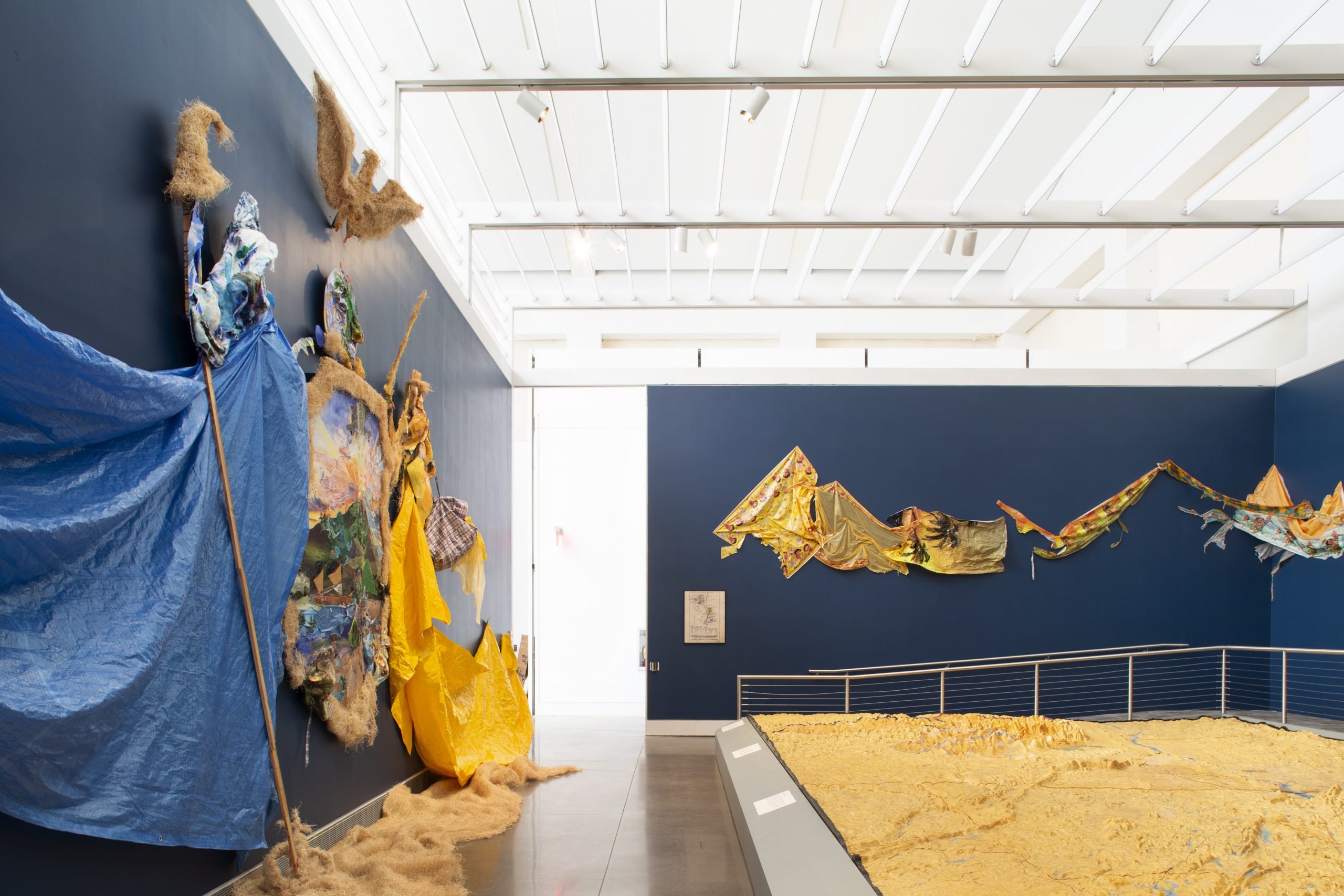 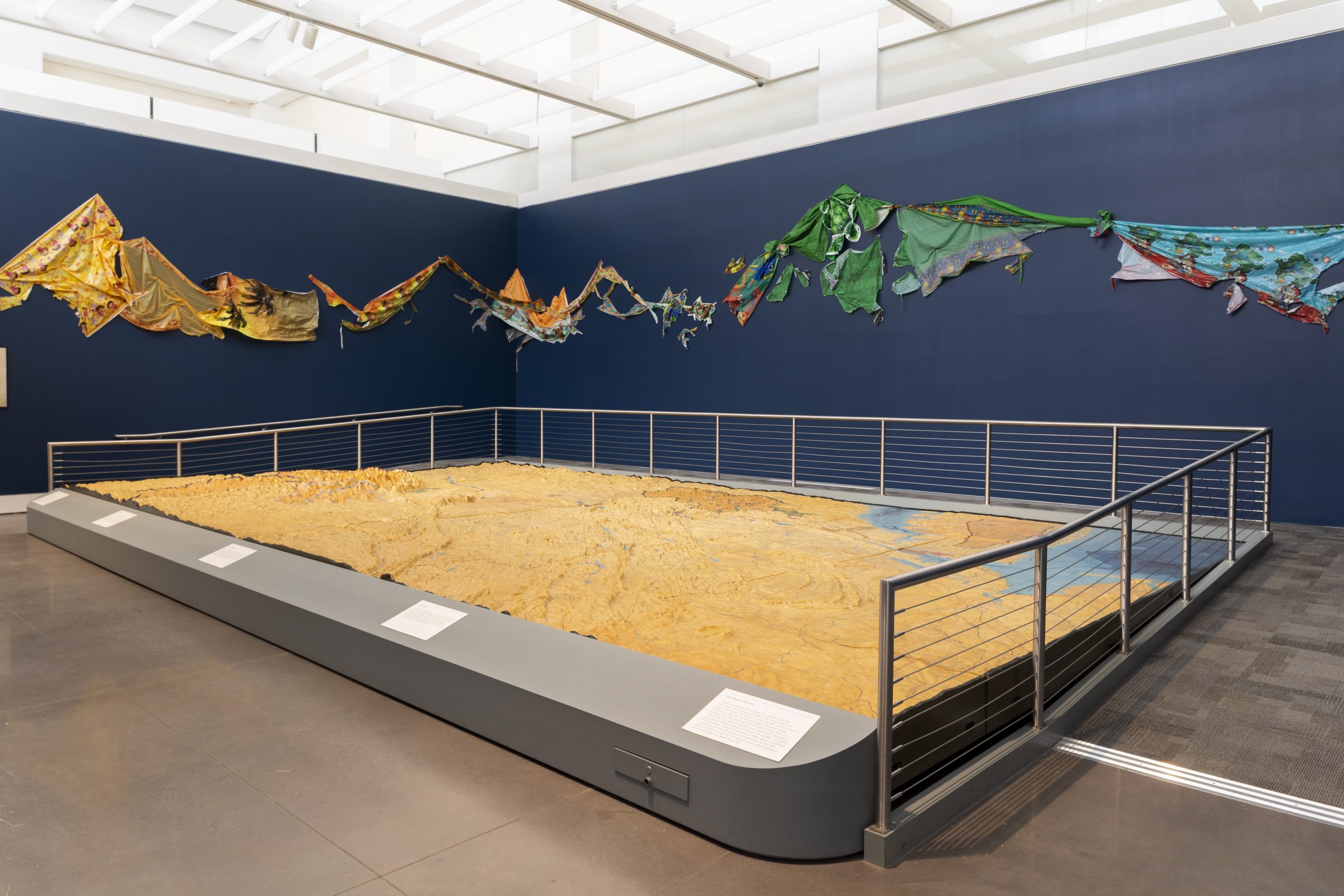 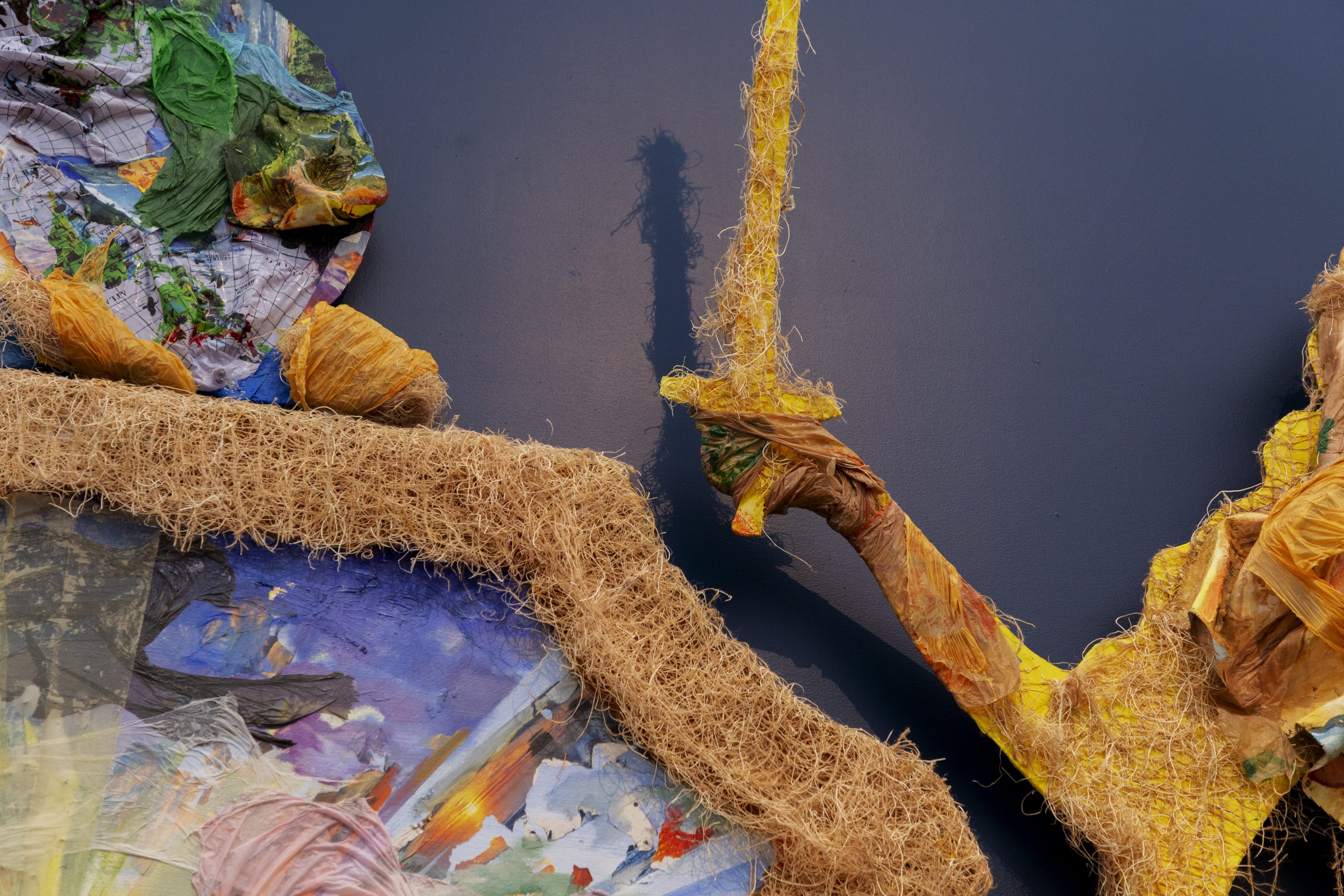 "Excelsior", a Latin term meaning "Ever Upward", is the official motto of New York State, and is also prominently featured on the state seal, which was first adopted in 1778. Excelsior is likewise a name for a material—the thin wood shavings made typically from "clonal colonies" of aspen trees which grow in the highlands across North America. I used this material while reflecting on the political and poetic discrepancies between "Excelsior", the motto connoting invincibility, and excelsior, the organic material used for environmental preservation. The various mass-produced materials I incorporated in this work were purchased from Queens hardware and dollar stores that serve primarily immigrant communities living around the museum. These materials were used to reinterpret the colonial symbols pertaining to water and commerce emphasized in the New York state seal, and include locally-sourced water in the form of printed plastics, party decorations, hurricane tarps and nature calendars bought in Woodside, Jackson Heights, and the Flushing neighborhood where my paternal grandfather formerly grew up during the time of the New York World’s Fair.

In April 2018, I had the privilege of speaking with Two Clouds, a Ramapough Lenape tribal member and full-time water protector at Split Rock Sweetwater Prayer Camp in New Jersey. Preserving the language, religion, and history of his tribe, Two Clouds is especially focused on indigenous rights while actively fighting against the Pilgrim Pipeline that threatens New York and New Jersey waters. Our insightful and ongoing exchange around water as it pertains to deep cultural traditions, ancestral trade routes, and long-standing colonial violence on this land has prompted me to critically reexamine my own personal interconnection with water, consumption and transoceanic identity. Drawing from our conversations and responding to the Queens Museum’s 1939 World's Fair relief model of the New York City water supply system, I researched the colonial symbols pertaining to water and commerce emphasized in the New York state seal, ultimately reformulating them with my own found materials.

Within the center of the New York seal, inland and foreign trade are represented by a masted sloop and ship docking on the Hudson River. In my installation, I replaced the sloop with a portrait of Two Clouds (friend, Ramapough Lenape tribal member, and full-time water protector) in his canoe advancing toward the viewer, and substituted the Western ship with a collaged pre-colonial Balangay "mother boat" from my maternal grandparents’ homeland in the Philippines.