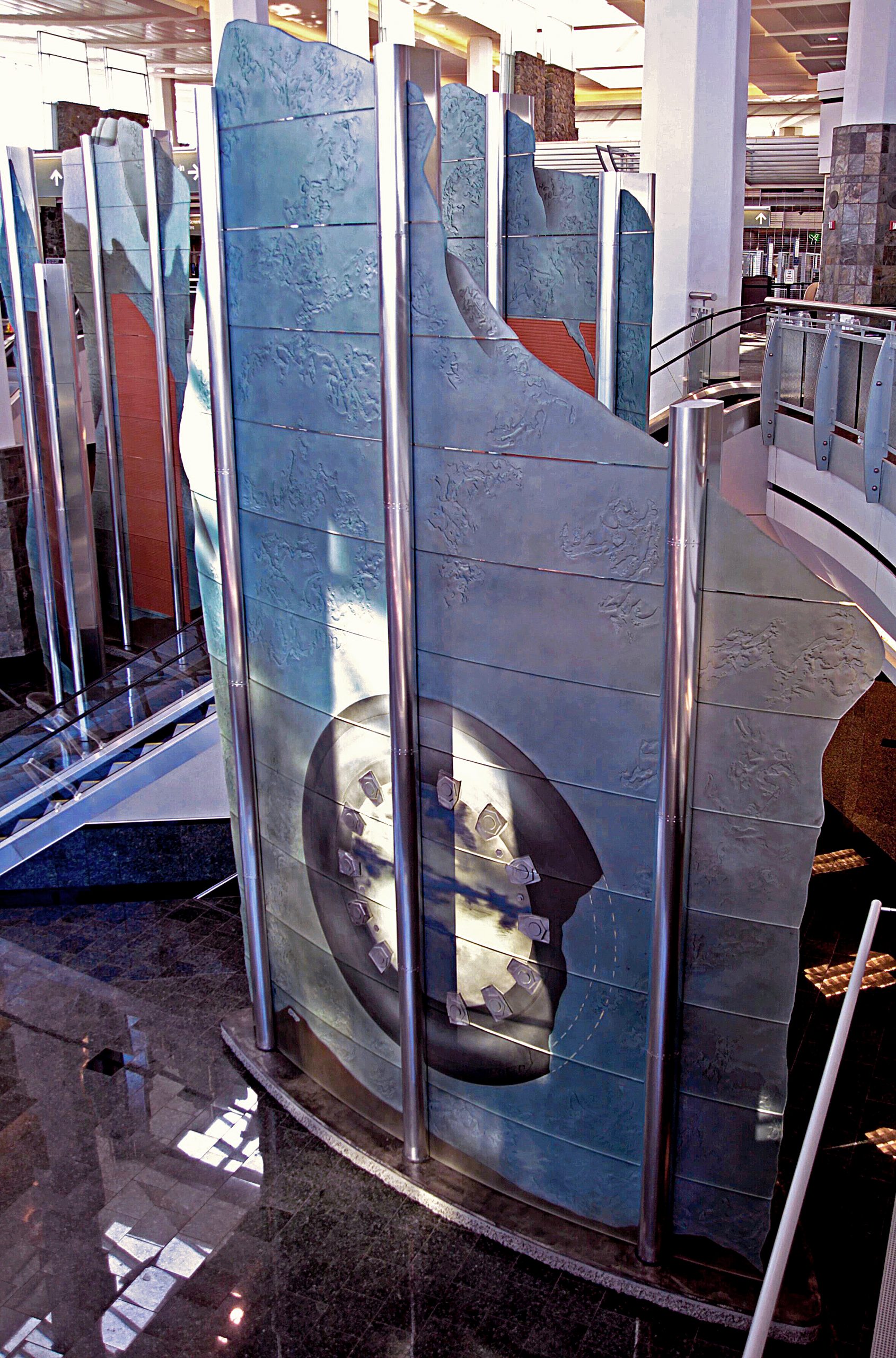 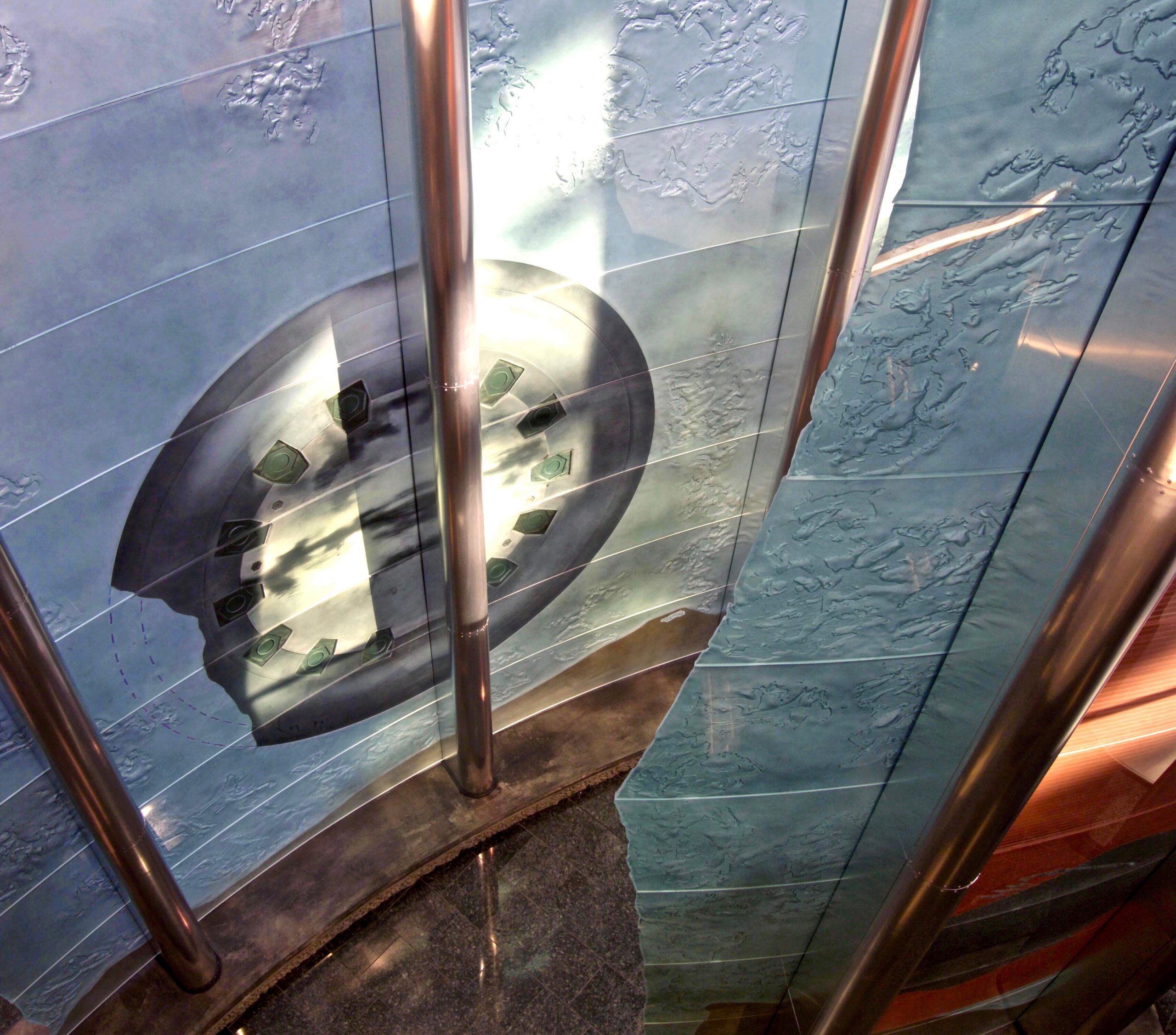 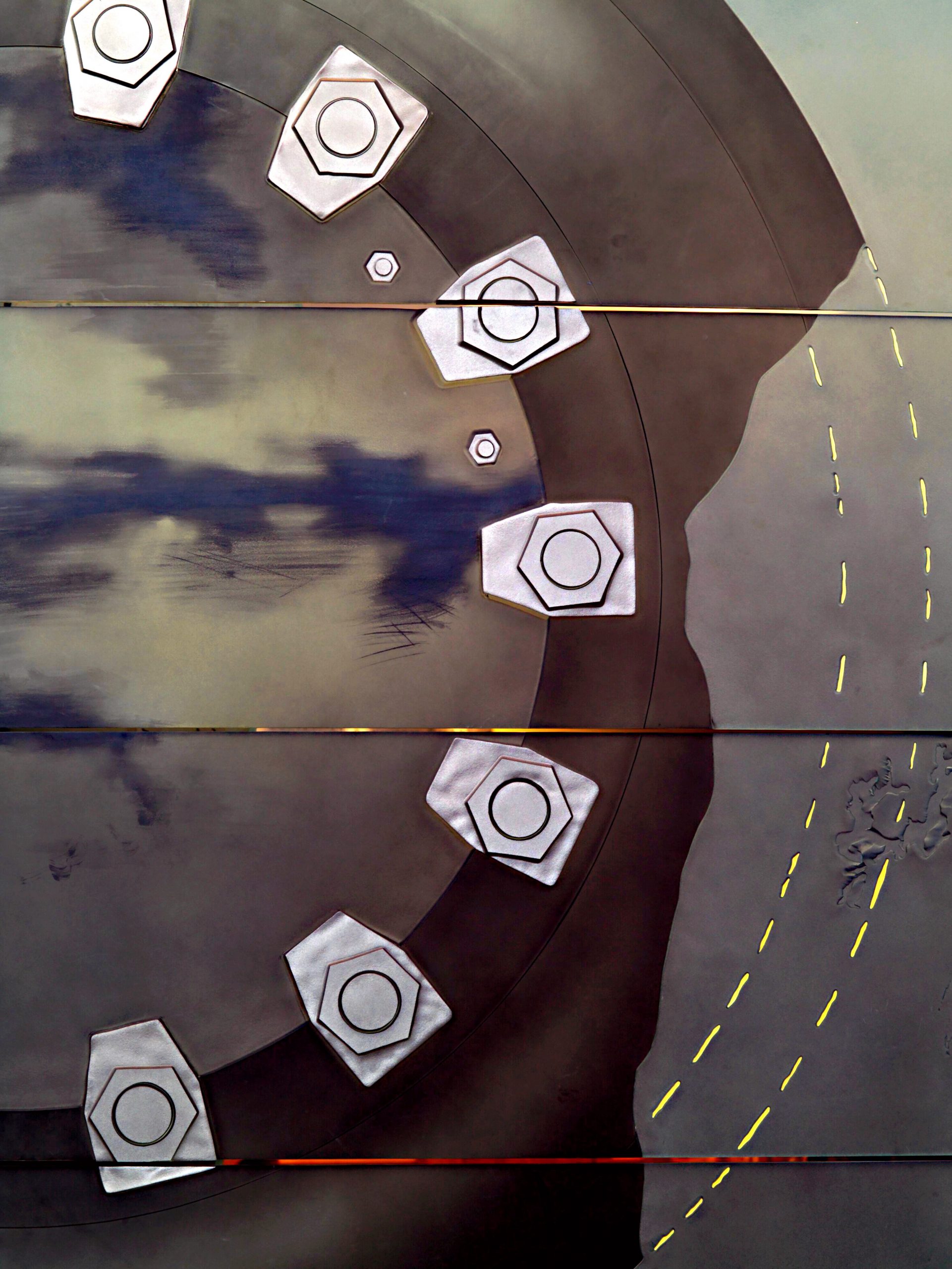 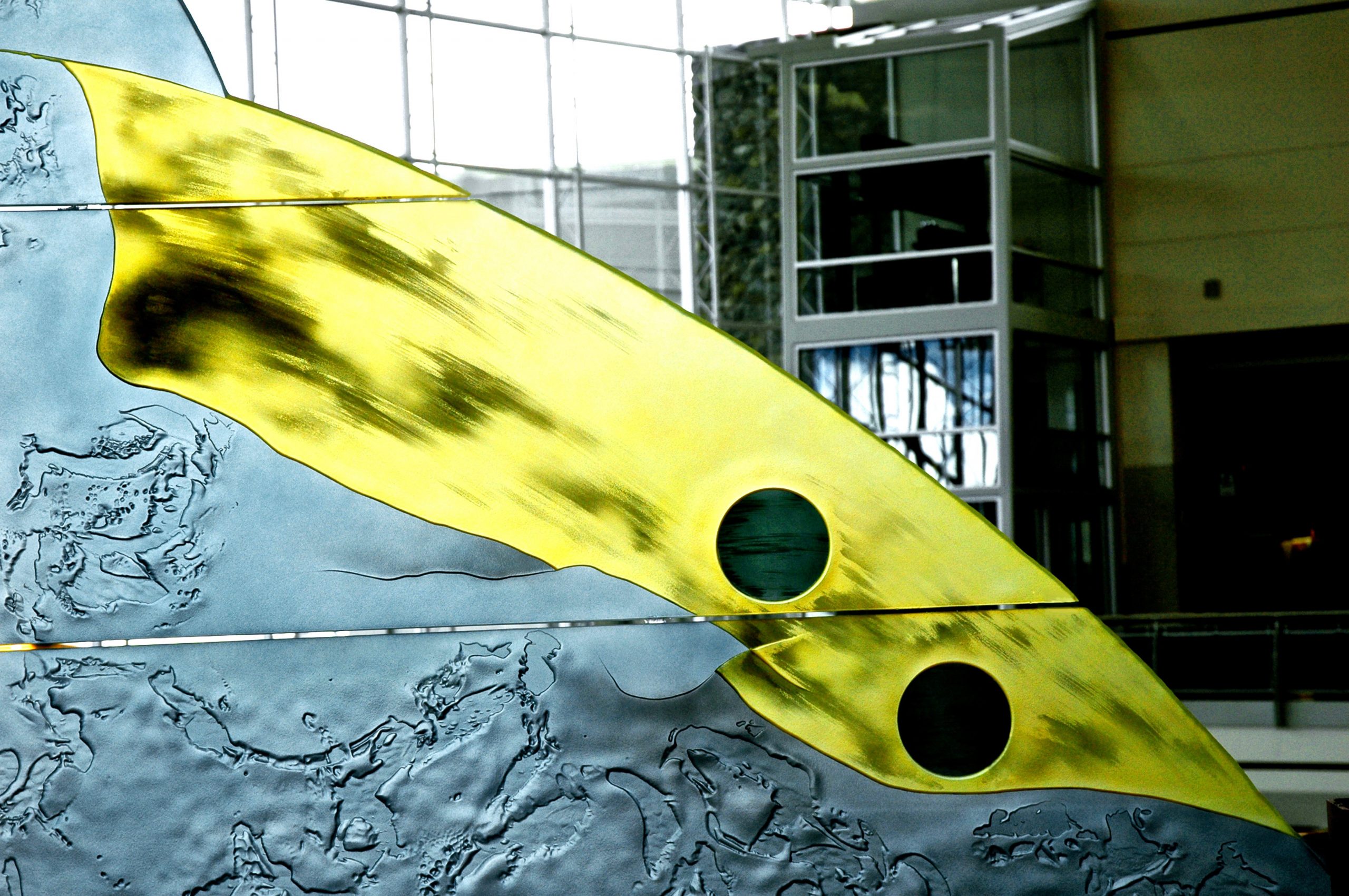 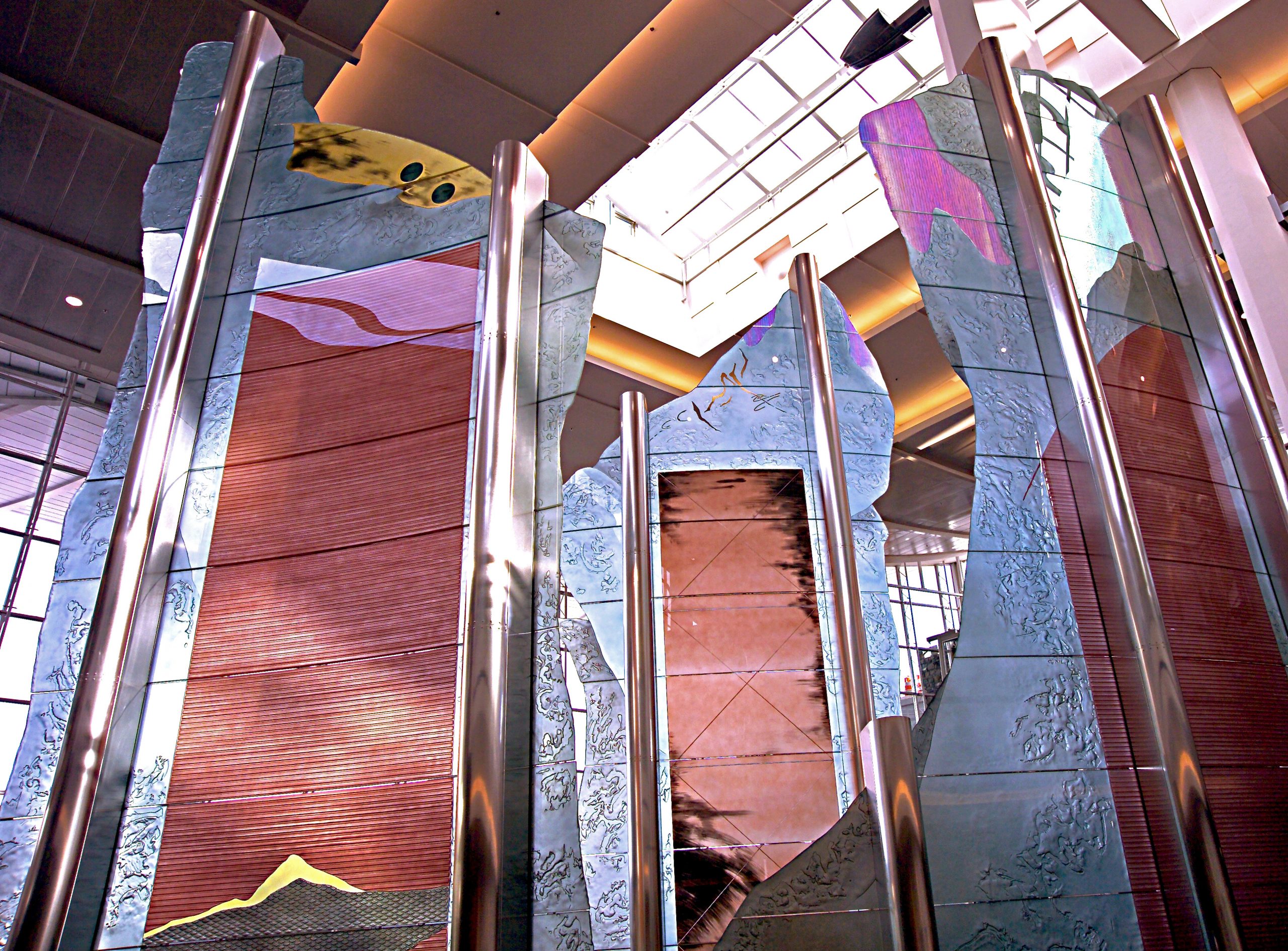 EUPHONY, installed in 2004, consists of 9 carved glass towers and supported by twenty-one hollow structural steel columns encased in riveted aircraft aluminum. At just under 9 meters in height and spanning an area of about 50 meters, Euphony is among the world’s largest carved glass sculptures.

EUPHONY explores the complex relationship between nature and industry in Alaska.
The initial inspiration for EUPHONY came from Alaska’s enormous landmass and the magnitude of its mountains, icebergs and glaciers. Euphony’s sculptural forms were designed to reflect this through their massive scale, rugged shape, texture and color. My intention was to evoke the sense of awe that one feels in the presence of colossal vistas of rock, ice, and snow.

I was fascinated by the repeated textures and patterns found in the Alaskan landscape. The patterns that could be observed beneath one’s feet as one walks across the land were often very similar to those that could be seen from the window of an airplane crossing the same land. The carved textures in the glass reflect this. It is a deliberately ambiguous impression of the various patterns and textures in rock, ice, forests, tundra and taiga.

I juxtaposed the land imagery with large rectangular fields of copper colored glass. These areas reference “Coppers”, the beaten copper plaques created by Alaska’s native people, for whom the “Copper” is a symbol of wealth. I created the “Coppers” as a symbol of the spectacular wealth of nature that Alaskans possess.

The large circular form with industrial bolts was inspired by an image of a hydroelectric dam. It is a symbol of the industrialization of Alaska.  In the centre of the circle lies an image within the image.  It makes a reference to a very hazy land or seascape, suggesting a future that is not yet clear and to be determined. Reflecting upon the exceptional balance between industrialization and nature that exists in Alaska, I titled the work "Euphony", a literary term that refers to the sound of words, which, when spoken together, create a beautiful and harmonious sound.