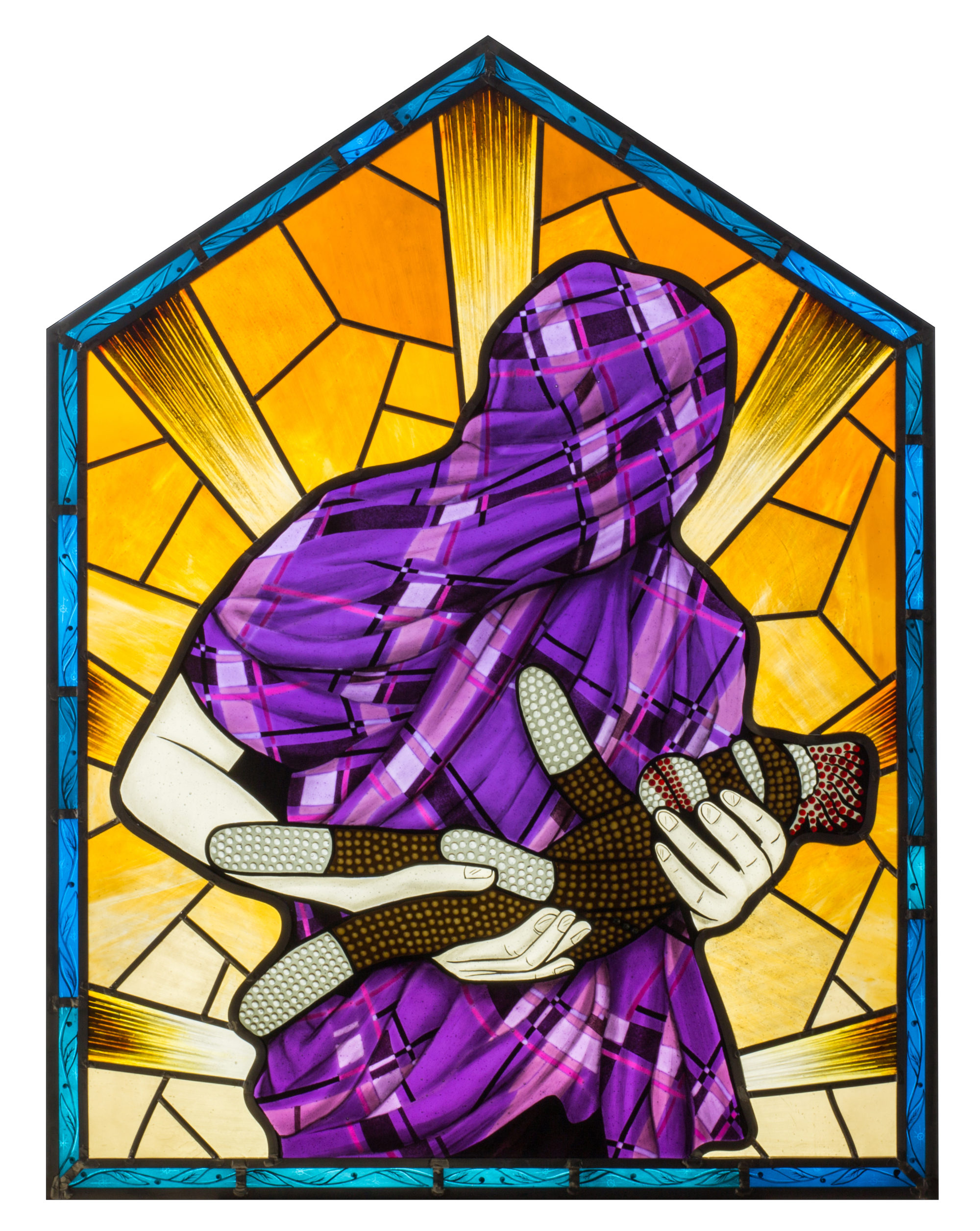 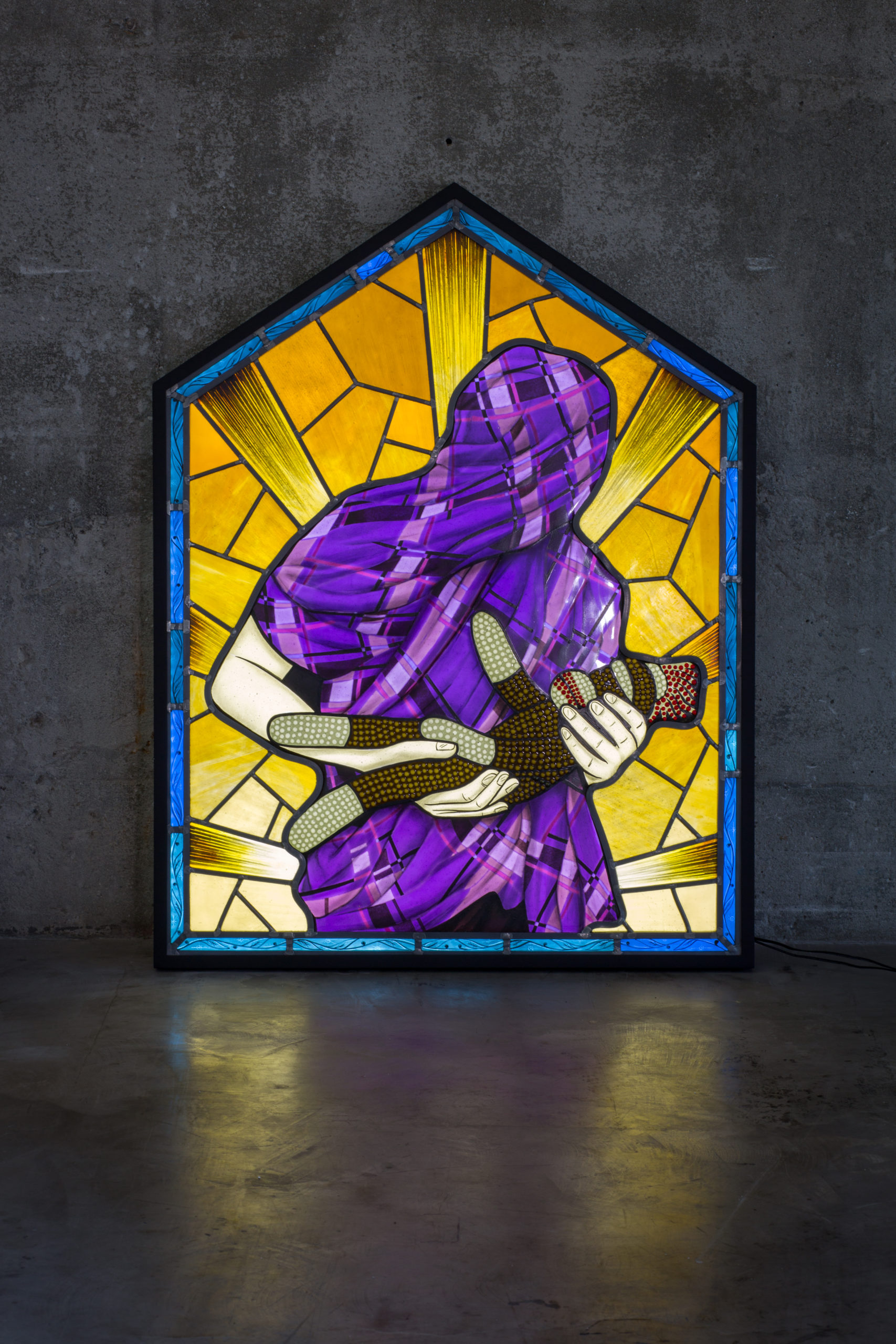 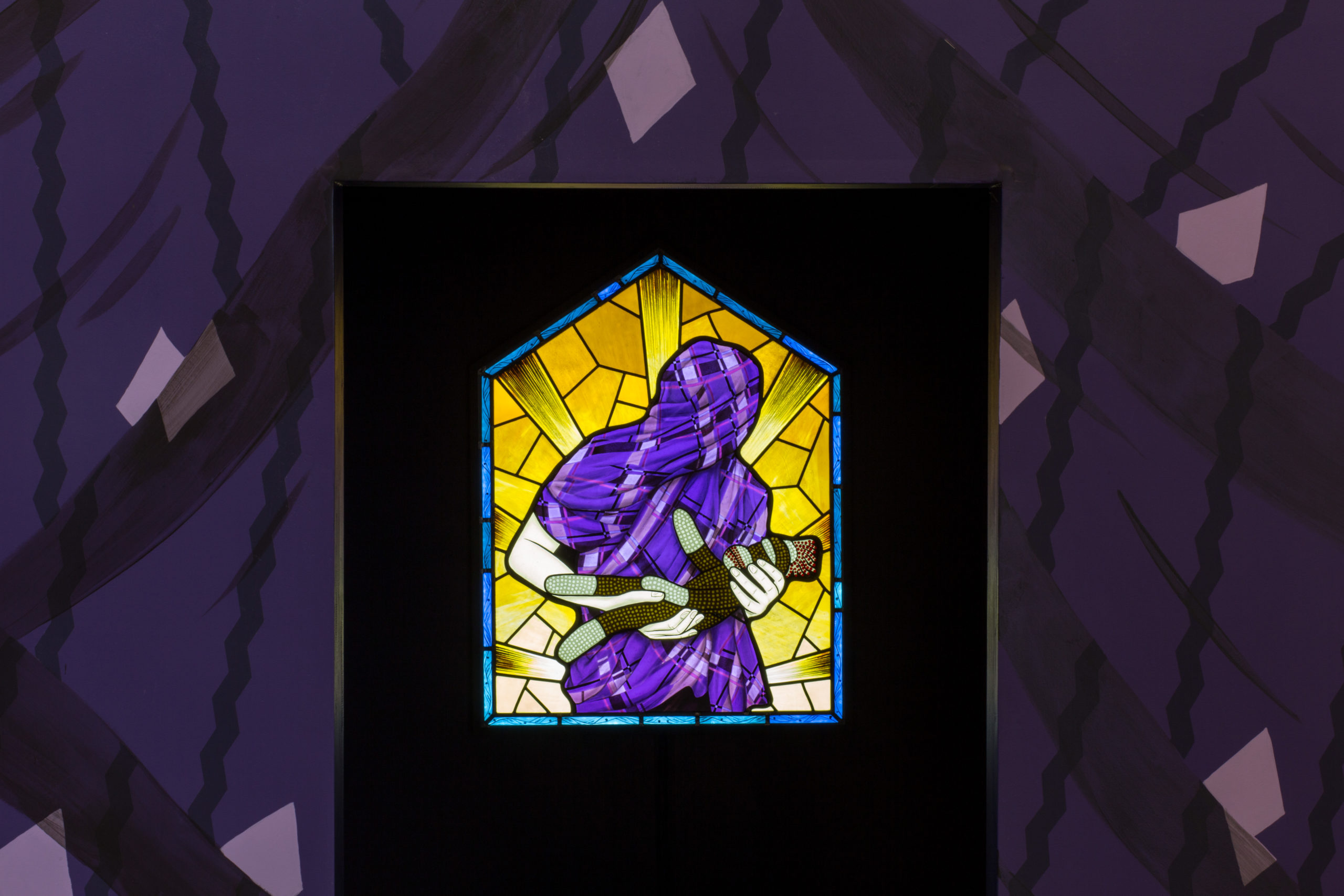 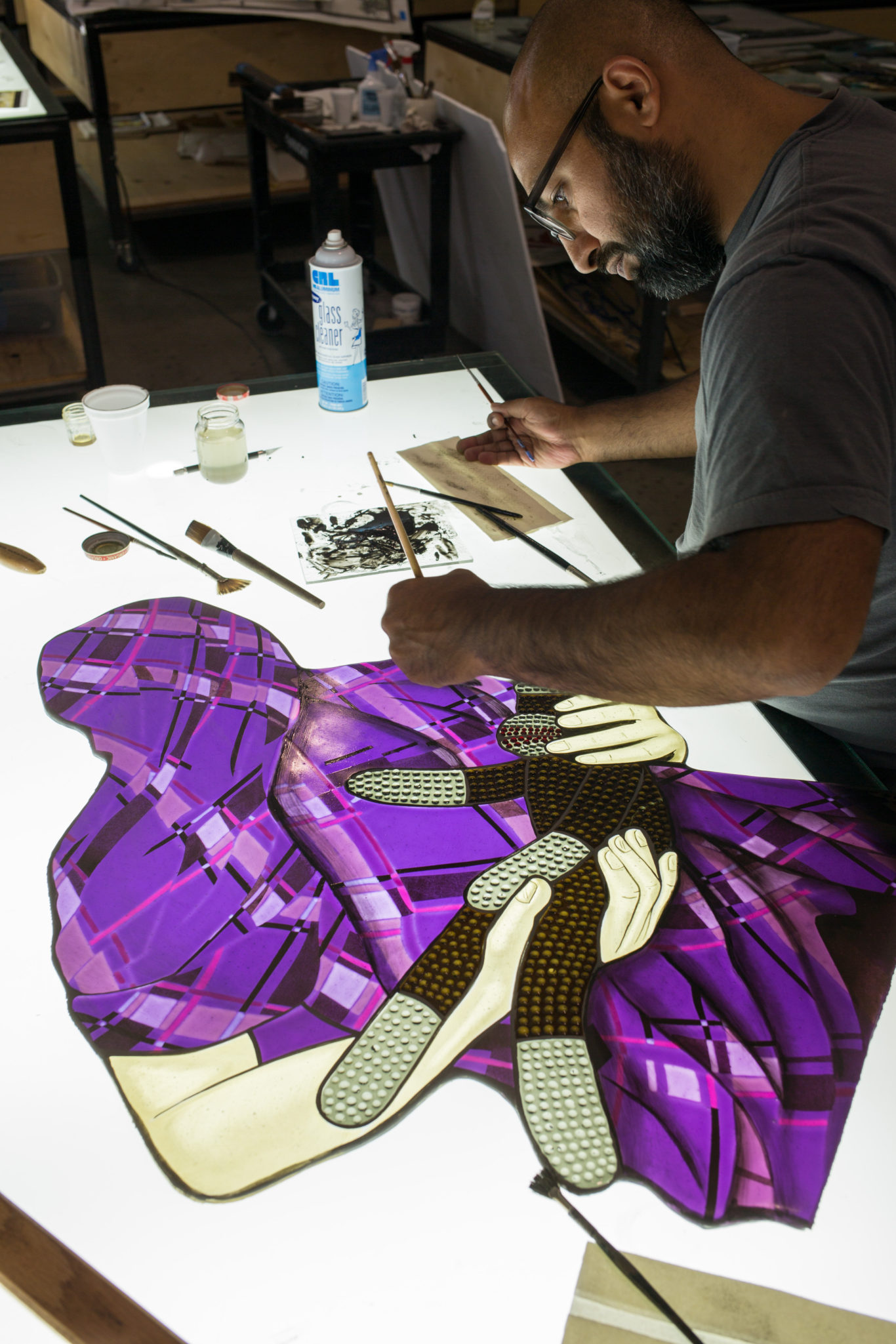 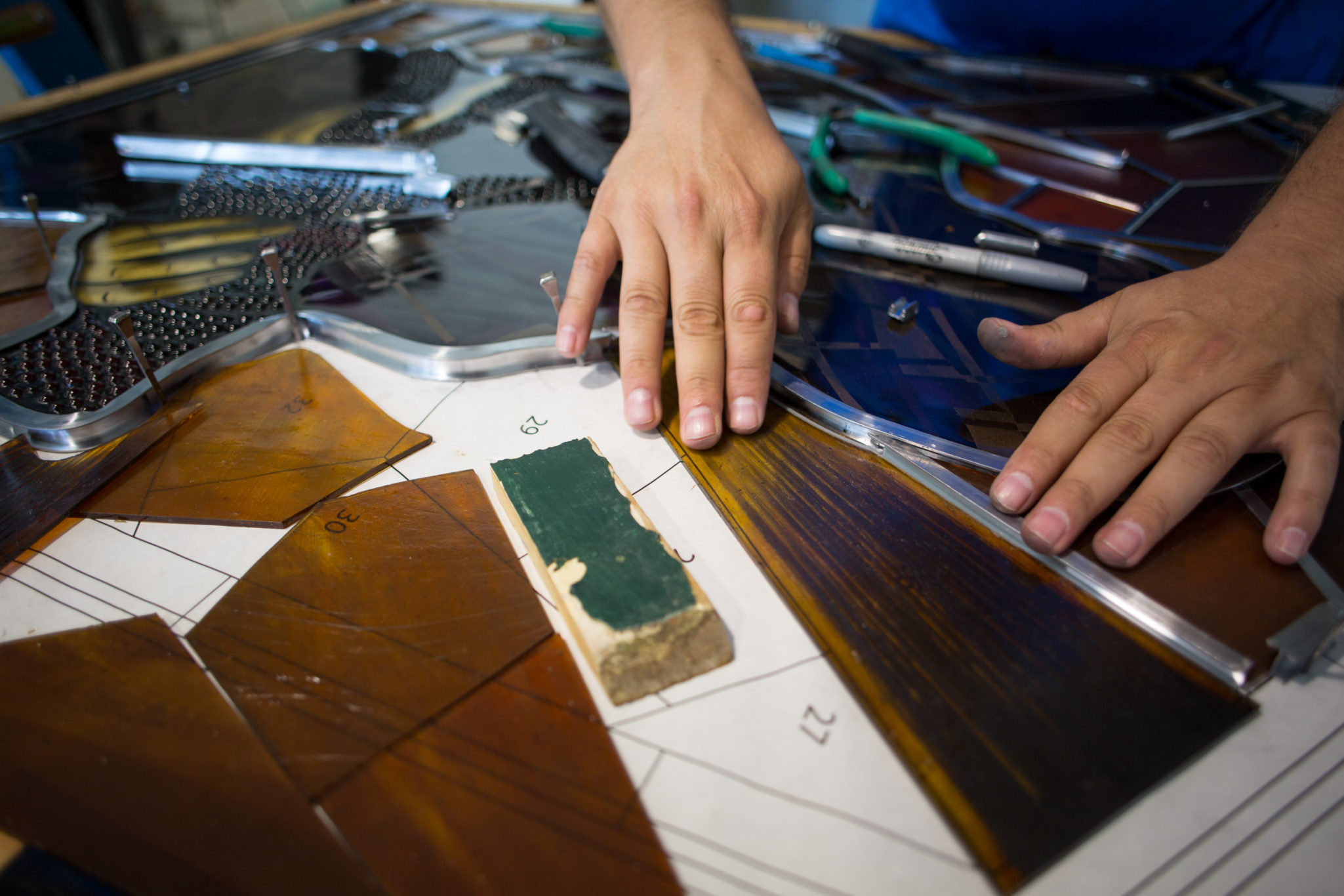 “Embracing the World” (2017) by Amir H. Fallah, in collaboration with Judson Studios. Judson Studios worked with fine artist Amir H. Fallah to produce a stained glass and fused glass panel which was based on an original drawing done by the artist. The piece was displayed in Fallah's solo show at Shulamit Nazarian Gallery in Los Angeles, CA in September of 2017.

Our goals in realizing Fallah’s work were to combine fusing and traditional stained glass techniques to realize his design in glass. Fallah spent time in the studio, becoming acquainted with the medium, so that he could become acquainted with how the medium works. Once artists become familiar with the process, they’re able to see how their work might translate and that certain elements of their art might even be enhanced by the medium. In this case, Amir’s bright work is enhanced by the light coming emanating from the panel. The piece was ultimately installed in a house-like structure in the gallery, which created a shadowy space. However, the choice of art glass was perfect for the environment because it shined through the darkness. In addition to glass’s ability to activate unique lighting and space design, Fallah’s work has a three dimensional component in the sock monkey which is composed of tiny tack fused beads. The work becomes more tactile and the physicality adds to the impact of that particular feature. The layering of the tack fusing elements enables the texture to be read from a distance and in photos.

We initially identified areas of the work that would work in either fused or stained glass. The artist met with the team to approve plans and select glass colors. Next, samples were fabricated to show the artist the appearance of different areas, specifically the intertwined fabric material and the texture of the sock monkey. The pieces combine glass paint and tack fusing to create three dimensional texture and depth. Upon approval from the artist, Judson moved into full production fusing all pieces and painting details. Fallah also had the opportunity to work with our artists, practicing painting on glass. Once all the fused and cut glass pieces were prepared, our craftspeople glazed them together. The work was then cemented to secure the glass and finally installed in a frame with a LED panel. Fallah gave final approval before the work was placed in the exhibition.