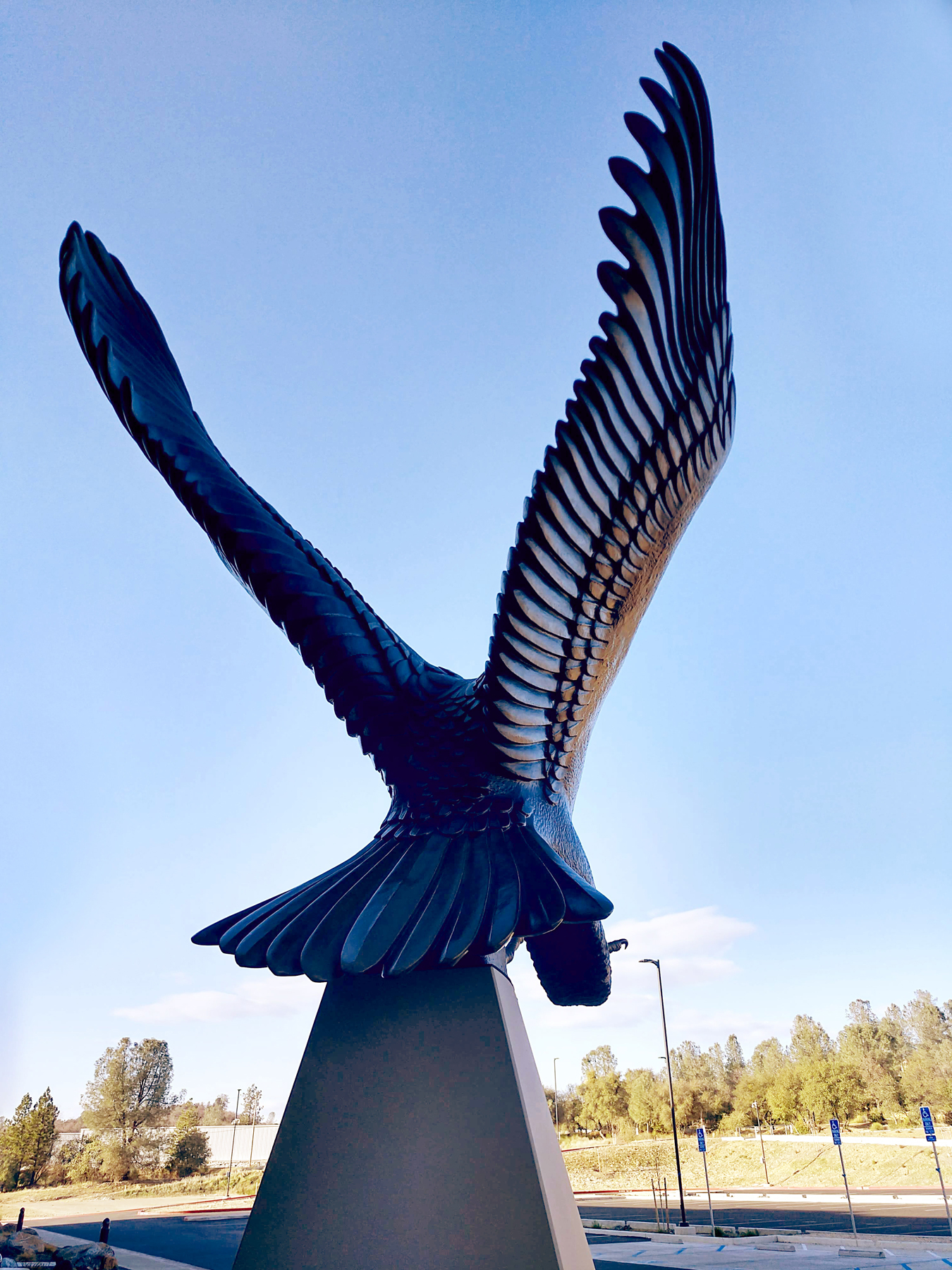 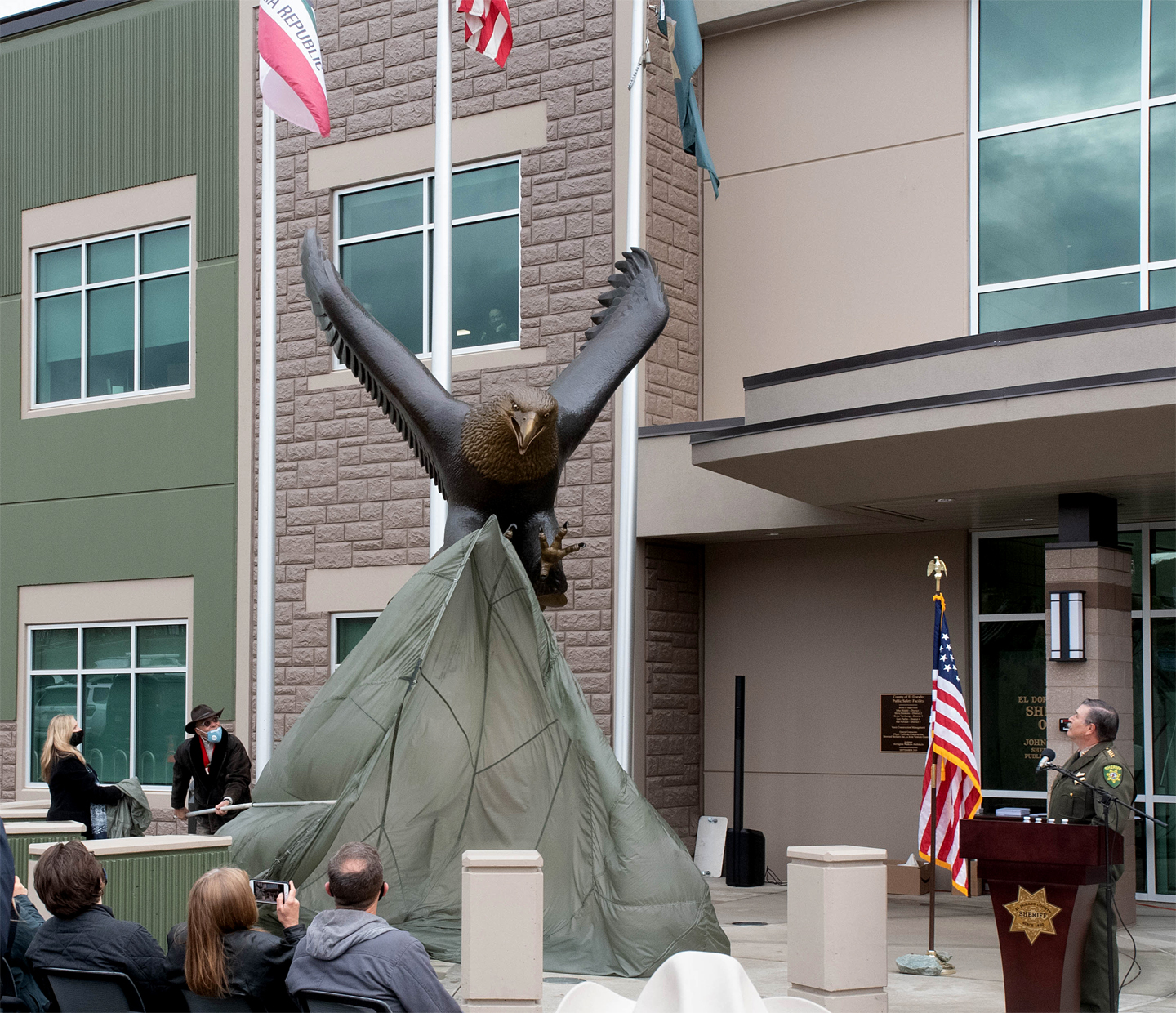 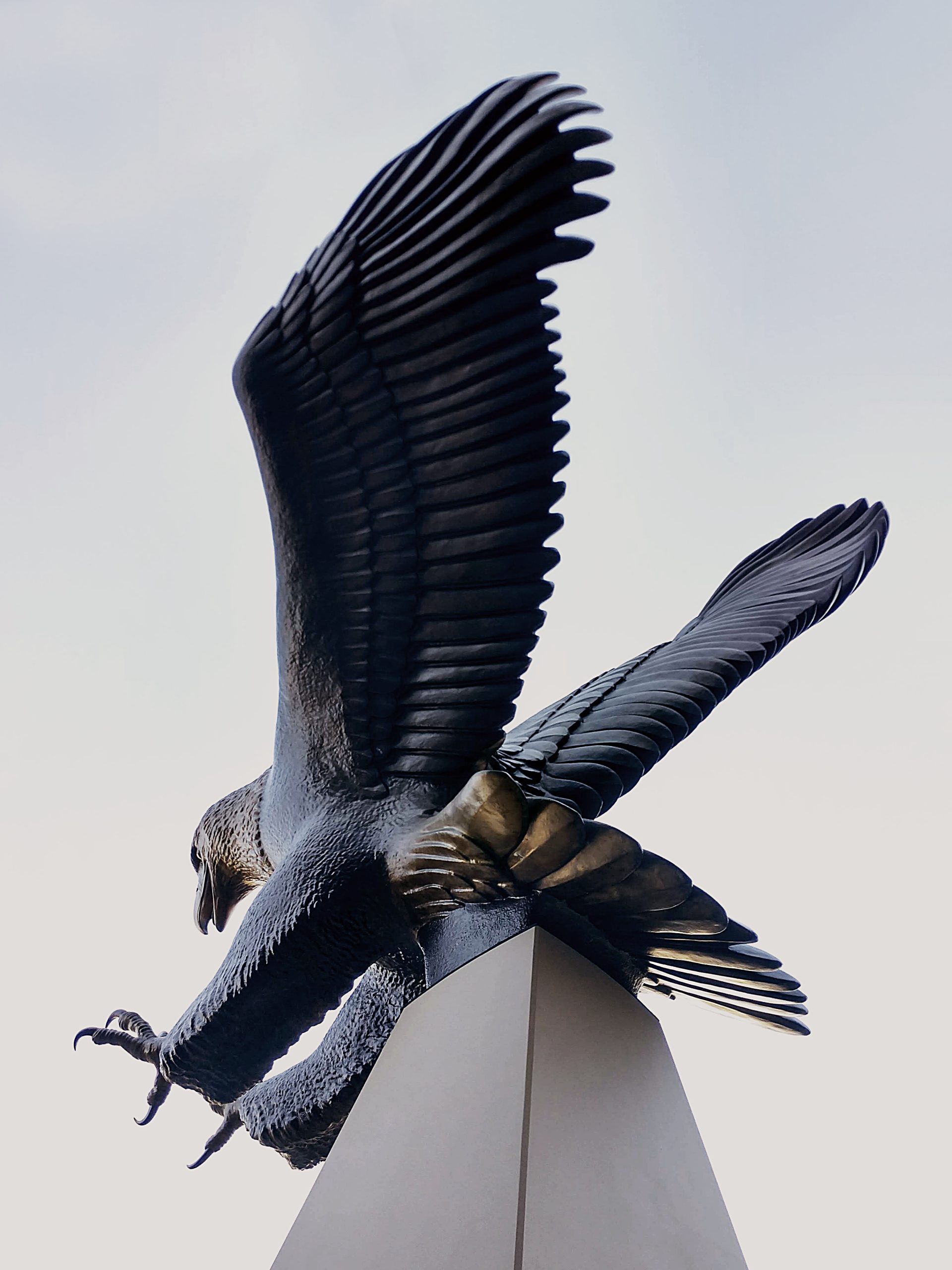 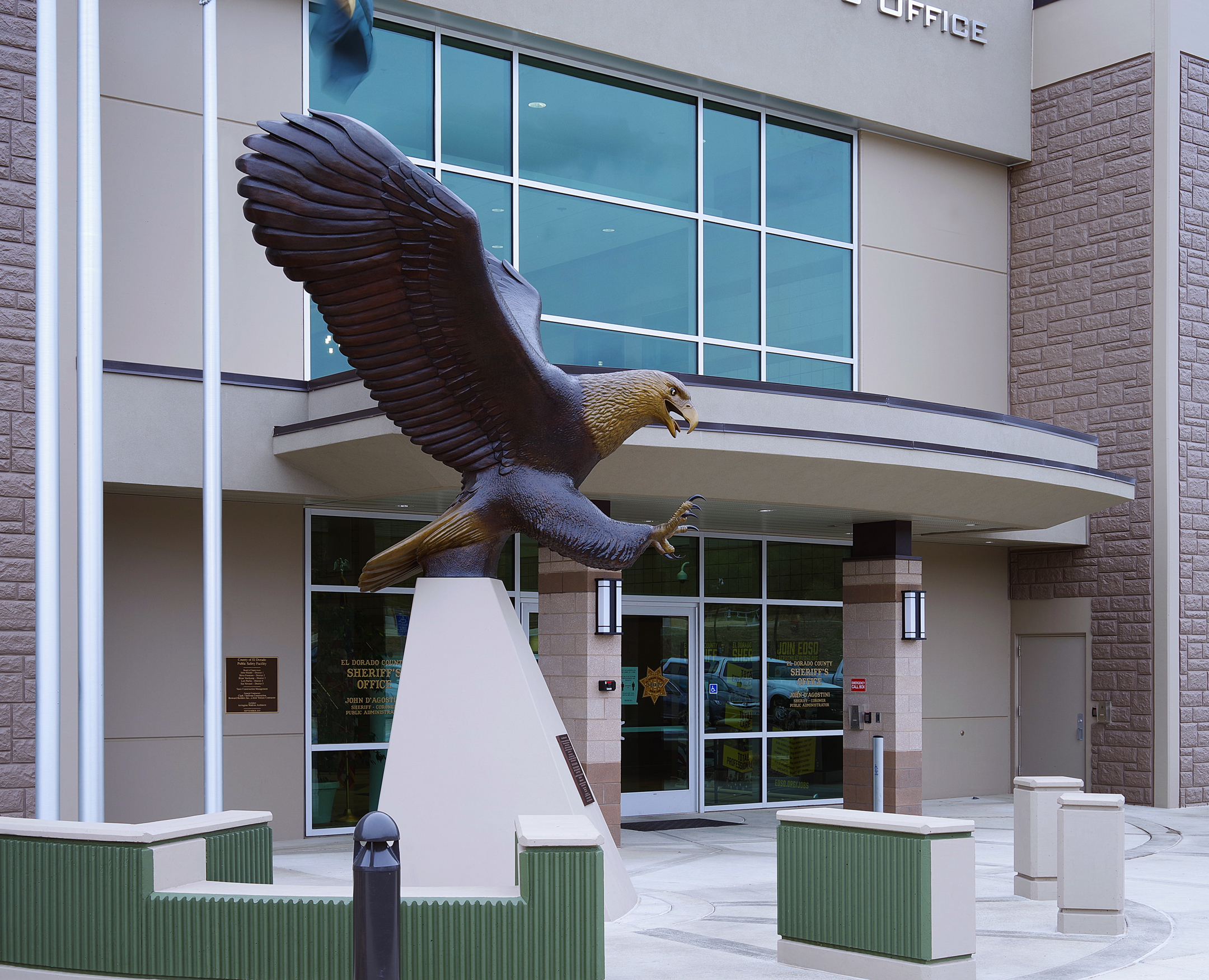 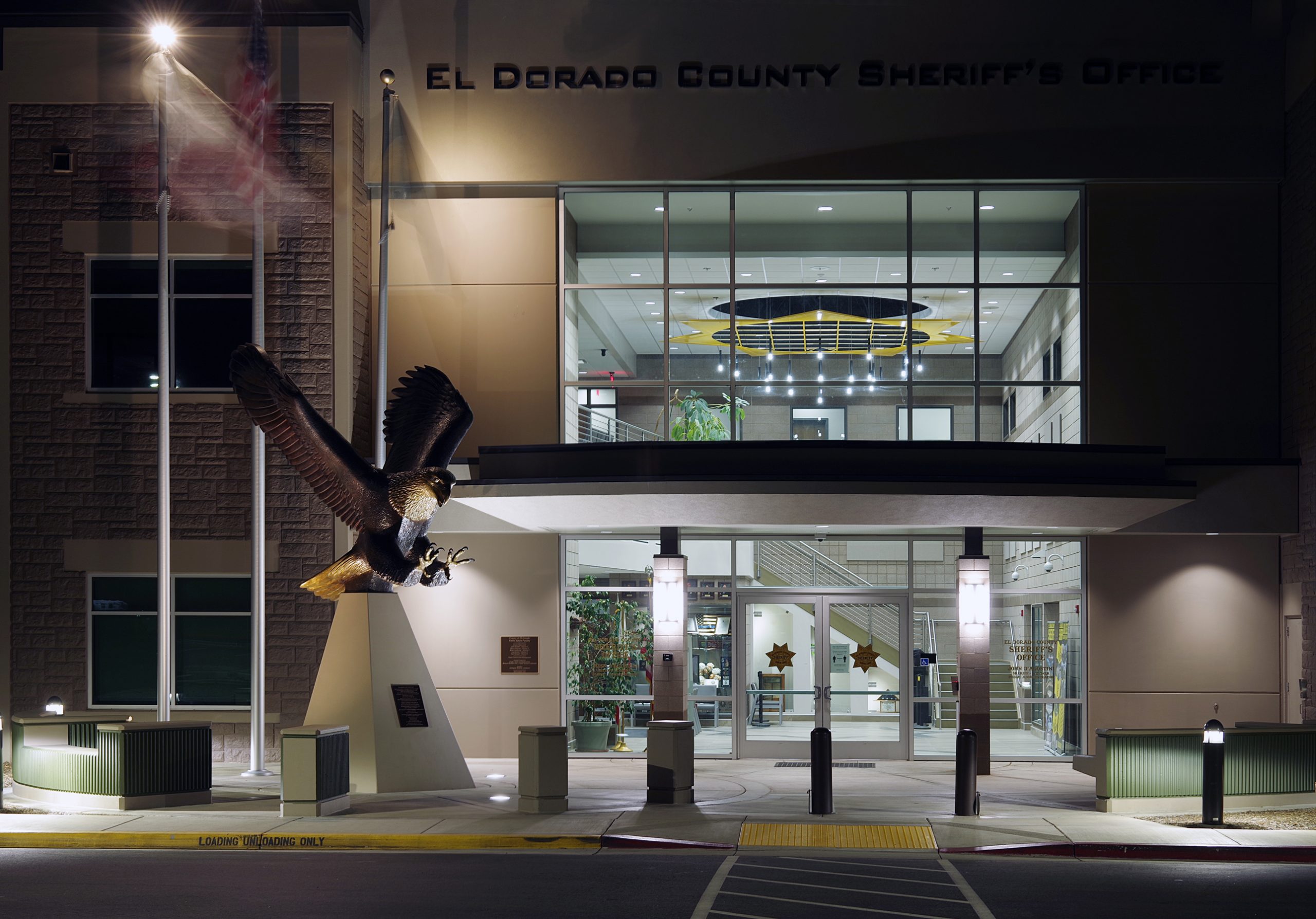 A Large Bronze Eagle Monument had been part of the vision of a new Sheriff’s facility in El Dorado County, CA, from the very beginning.
I live in the county and Sheriff John D’Agostini, having heard of my 7′ tall granite eagle, called to visit and see it in the ‘flesh’. He was sufficiently impressed to share his plans with me and invited my collaboration. I gladly obliged.
At the time the project was still in its infancy. As the planning slowly proceeded through the administrative steps for such a major public infrastructure project, the architectural firm was instructed to design a space for the monument by the main entrance of the facility.
I was called in to make a presentation of the monument at the final overview of the development. The original granite eagle has a salmon in its talon, which was to be taken out of the composition when cast in bronze. But when I saw the size of the proposed building, I realized the monument would have to be scaled up not to be overpowered by the structure and to contribute aesthetically to the space, hence integration became extremely critical for a successful outcome.

I was provided the architectural files of the building to determine the appropriate sizing of the monument, which I modeled in a 3D environment, arriving to a 160% scaling up to 10’-6” for the sculpture itself. The pedestal to display the eagle on was to be 8’ tall off the walkway, for security and safety reasons.
I consider the displaying of a sculpture as important as the work itself. I wanted the pedestal to be well integrated with the sculpture, the space and the building itself, taking into account weight and structural considerations.
I started with shape of the base of the sculpture, a trapezoidal form wider in the back with curved sides, the pedestal becoming an extension of the sculpture itself. The slightly curved surfaces would also reflect the only curved feature of the architecture, the canopy over the entrance. Visual stability dictated a downward widening of the pedestal and backward tilting, to line up the center of mass of the eagle with the center of the pedestal footprint. Of the number of options, I chose a cast in place reinforced concrete pedestal, finished and sealed with the same elastomeric paint as the building itself, becoming visually unobtrusive.

I designed the pedestal in 3D graphics including the reinforcement, and worked with the project engineer to bring the structure into compliance. I also designed and built the curved forms and personally undertook the construction of the pedestal from beginning to end in coordination with the general construction scheduling. I selected the in-ground architectural lighting fixtures, laid out their positioning for optimal effect at night, and worked closely with the electrical contractor for installation of the three fixtures and their integration with the exterior building lights and lighting on the flag poles.
The casting and fabrication of the sculpture was undertaken by ArtWorks Foundry in Berkeley, CA and I personally fabricated the base of the sculpture and did the metalwork of the talons and some final finishing touches at the end before patination.
Once I was given the wording of the bronze plaque, it was part of my responsibility to design it, order it and install it, as well as the delivery, installation and draping of the eagle.
I also designed and produced the invitations for the official dedication of the monument.

Rather than being part of the capital expenditure, consequently publicly funded, this project was financed by private contributors through a Not For Profit Foundation.