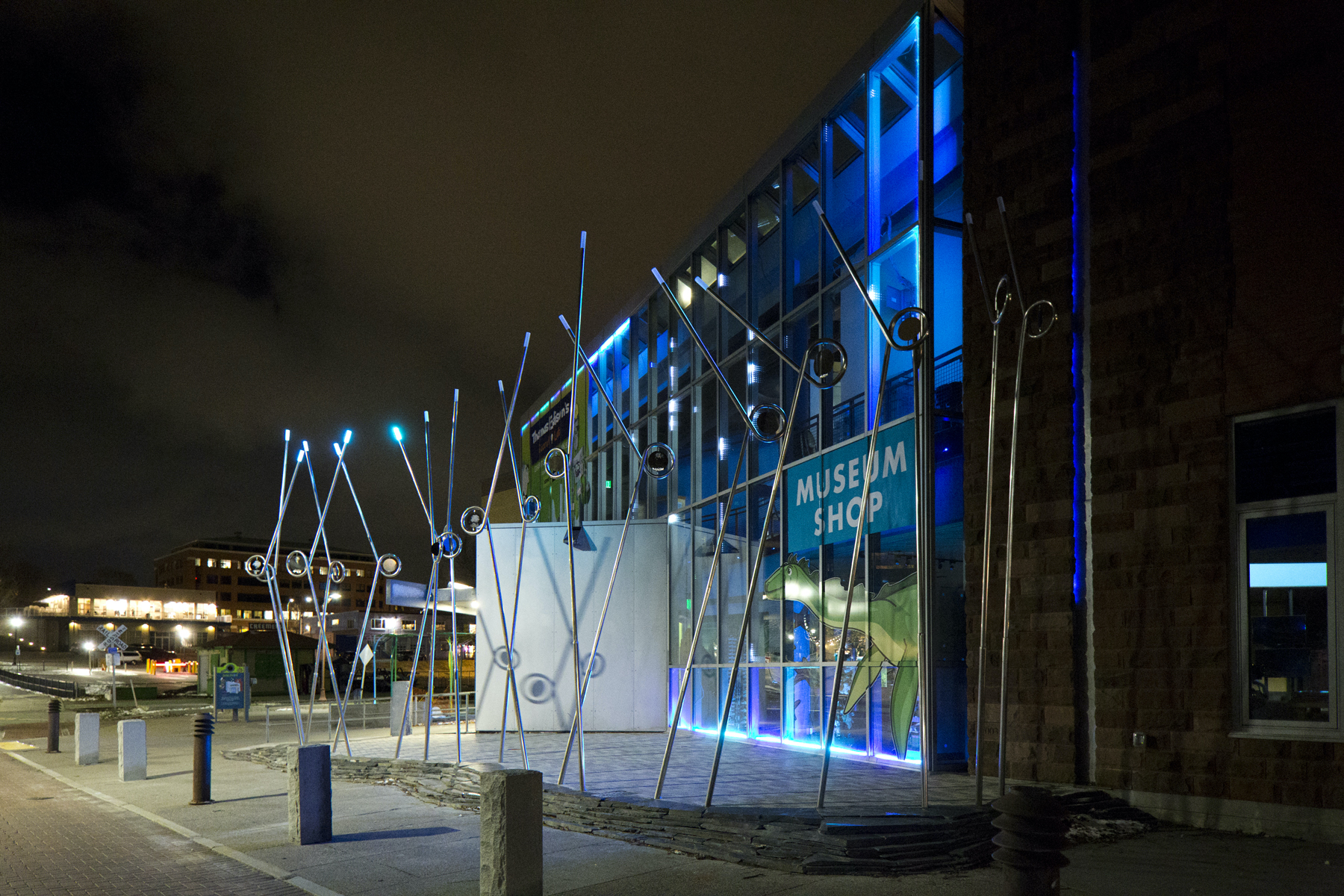 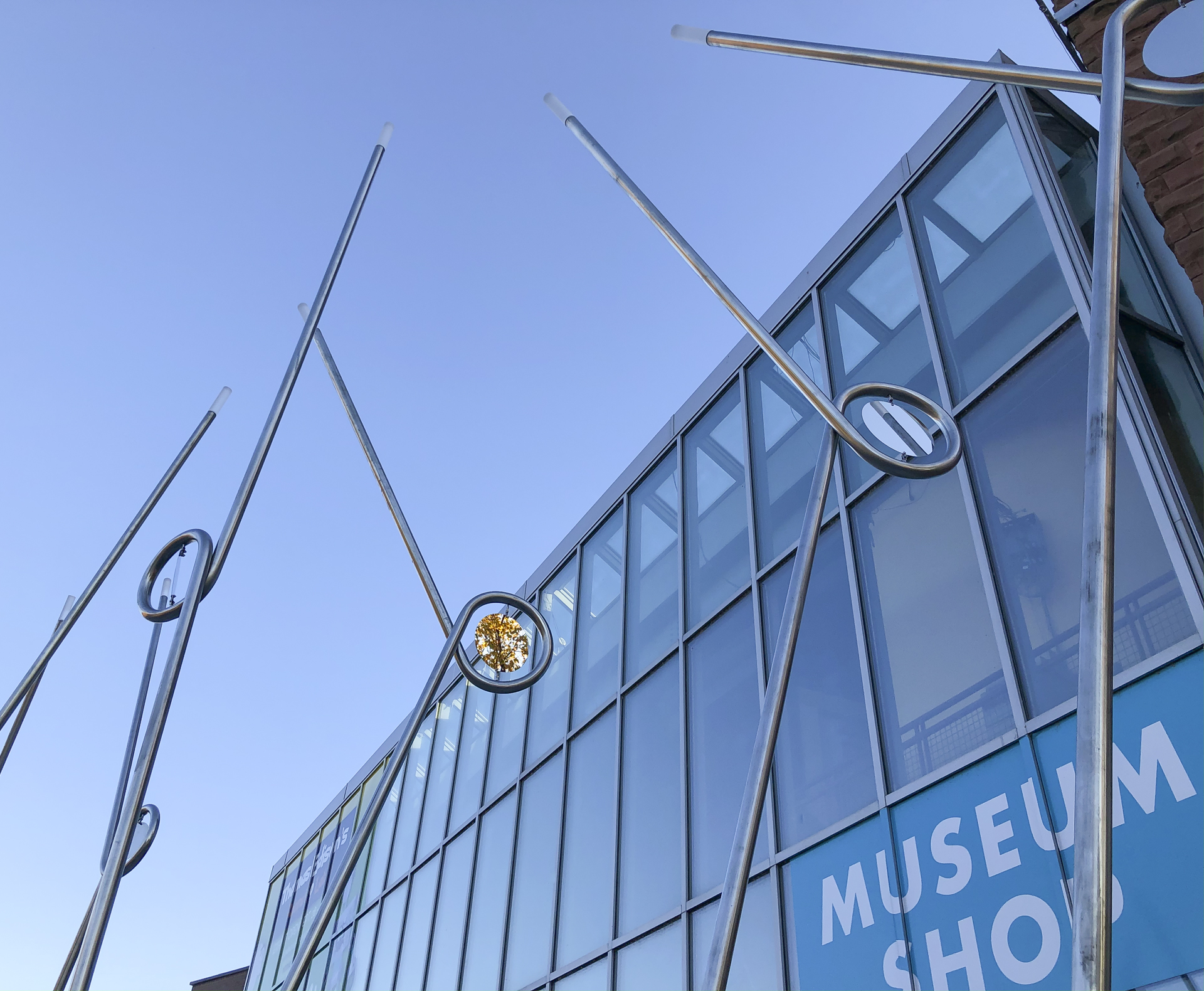 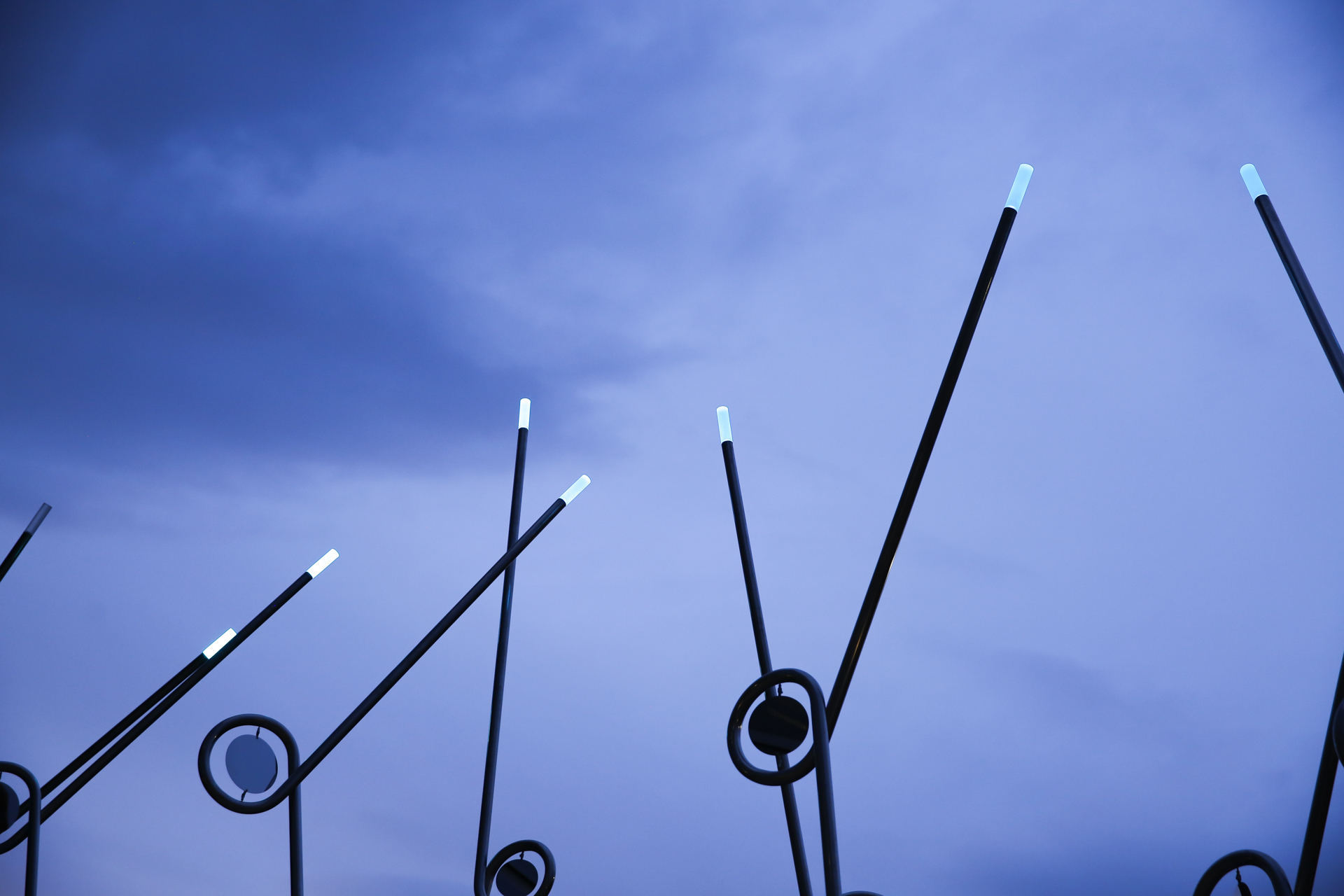 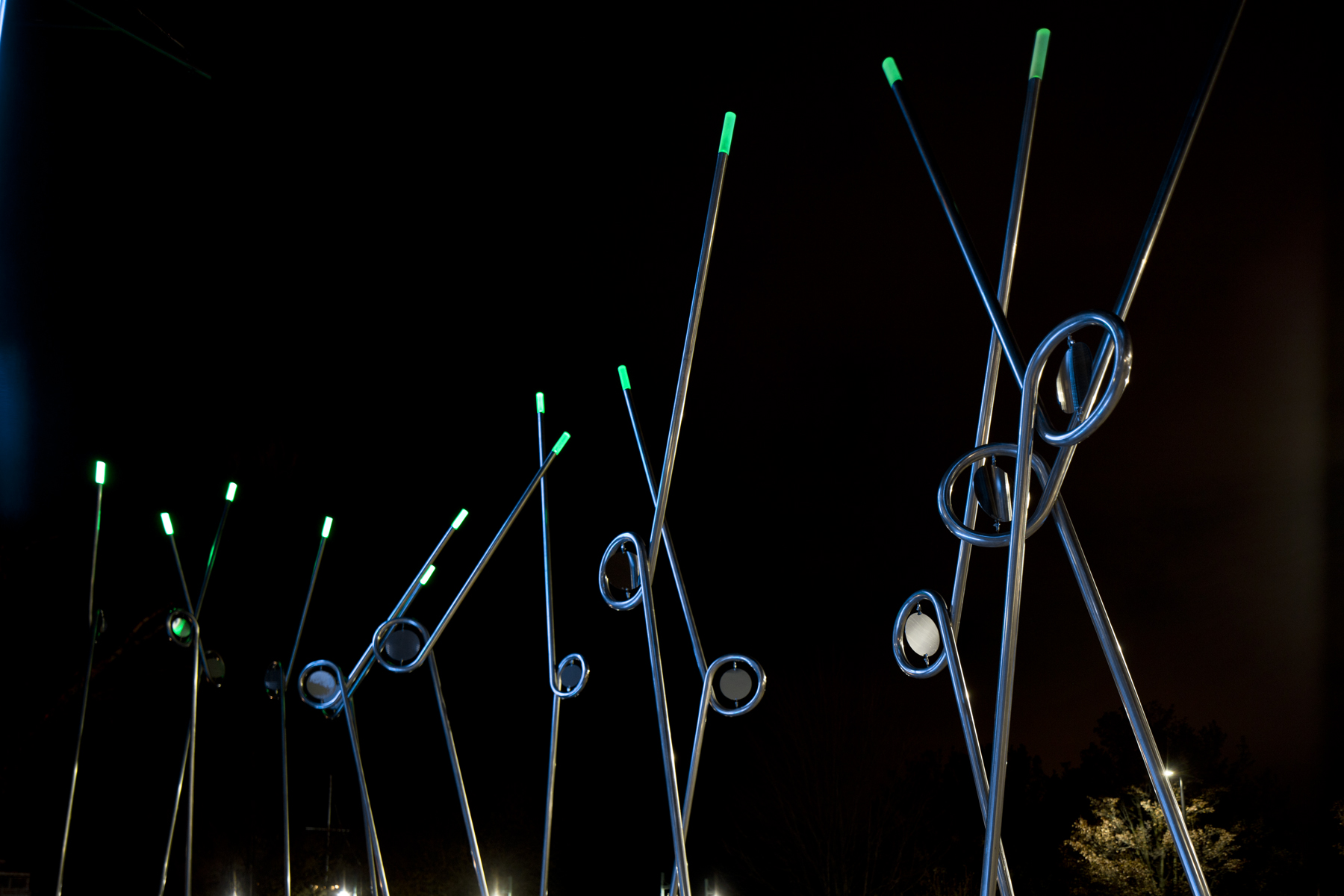 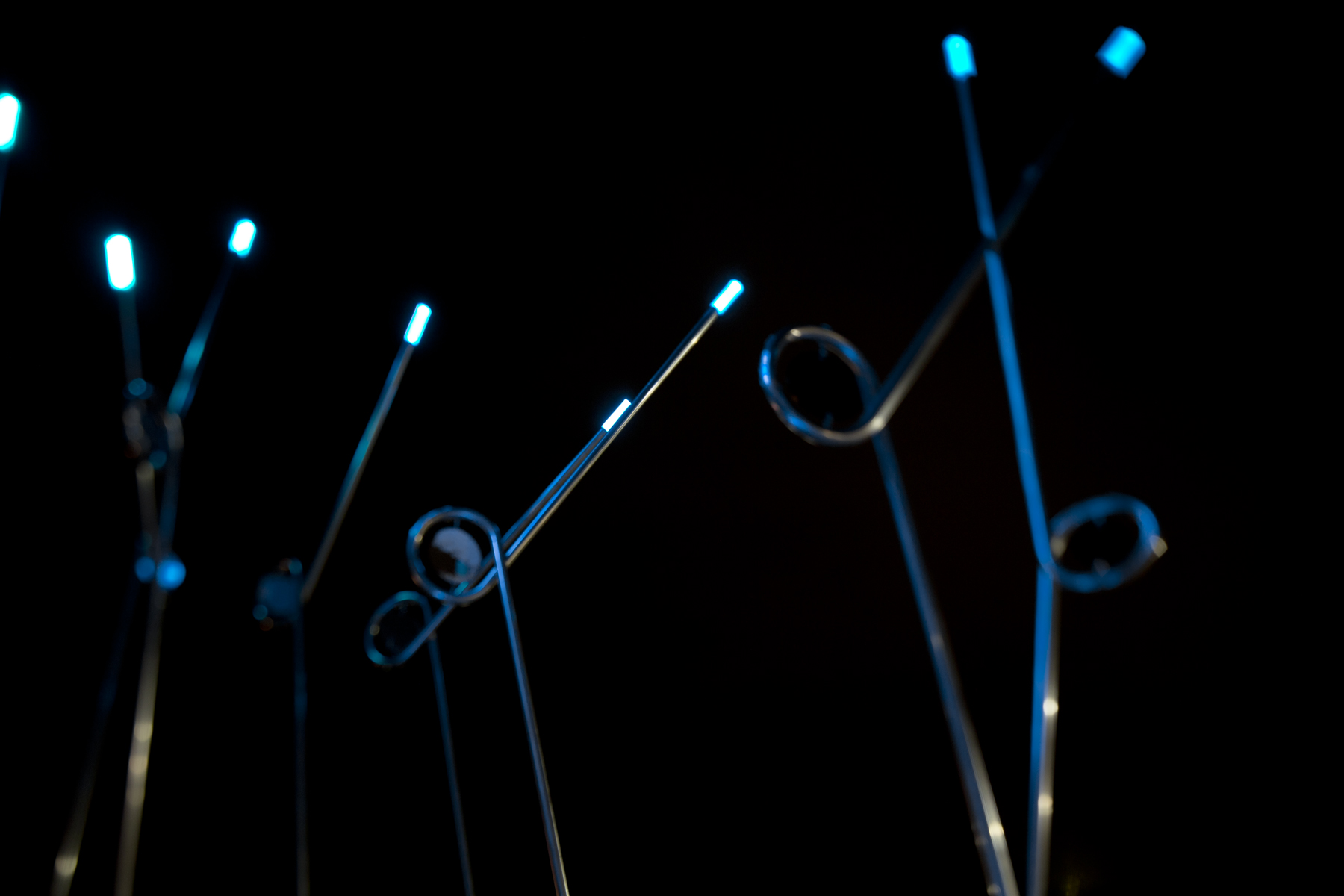 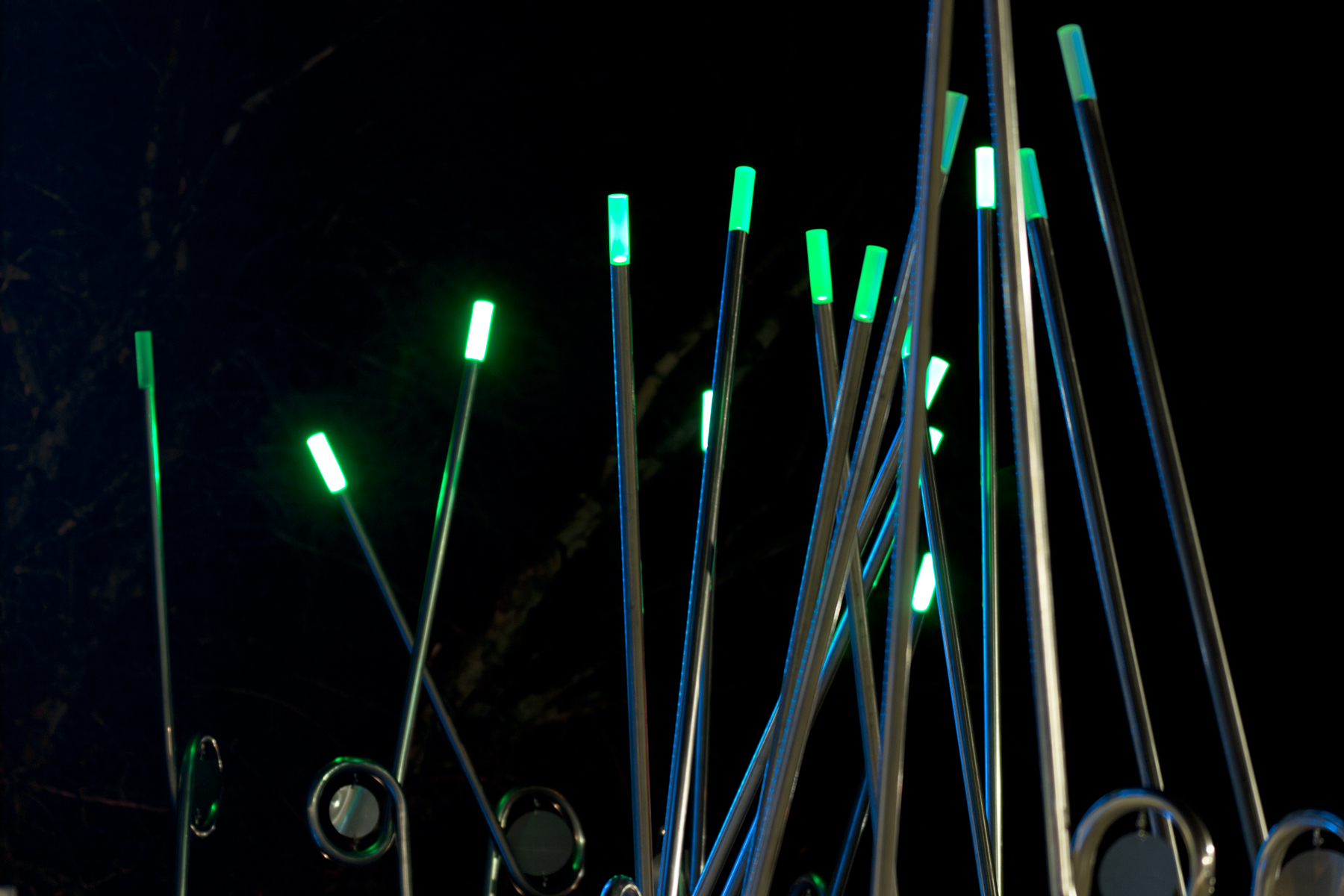 EchoLuminous is a celebration of the energy forces that surround us–wind, solar, water, Earth–and a daily reminder of the necessity to live in concert with nature. EchoLuminous, a sculptural installation, transforms the space at the ECHO Leahy Center for Lake Champlain in Burlington, Vermont into Energy Commons, a waterfront public space that facilitates connection between people, place, and our shared energy future. 18 energetically looped stainless steel rods topped with LED lights converge 20’ into the sky, defining a 16’ x 45’ space at the entrance of the museum for gathering and reflection at this intersection of land, water and sky. Loops in each rod form an upward progression from the ECHO entryway towards the lake. Mirrored stainless steel disks suspended in the loops respond in dynamic ways to wind and light, mirroring land, sky, and humans below, suggestive of bubbles, molecules or atoms. Lights atop each rod show wind speed in real time through different color and speed sequences based on the Beaufort wind force scale, illuminating the story of the wind energy around us. The sinewy rods, a forest of fundamental forms, provide a focus to Energy Commons and visually connect to the verticality of the building and the masts and pilings in the lake.

The goal for EchoLuminous: to engage visitors up close and passersby from afar, in different seasons, day and night; that it communicate a theme that would be difficult to convey through other means. Our intention as artists was to create artwork that represented the hope and potential of renewable energy sources.

EchoLuminous is the iconic and highly visible focal point of the Burlington Waterfront and the capstone of the Energy Commons Placemaking process, which included a voter-selected Public Investment Action Plan and a matching investment of city funds. The process identified two essential needs: the revitalization of a formerly industrial waterfront and the rethinking of our human relationship to energy.

ECHO, located at the intersection of bikes, trains, busses, and pedestrians, serves as the gateway to the waterfront and a civic hub. Its mission is to engage families in the joy of scientific discovery, wonder of nature, and care of Lake Champlain. Energy Commons and EchoLuminous, at its entrance, extends the museum’s message to all, regardless of ability to pay. The artwork draws people to the waterfront, celebrates the urban environment, leverages the aesthetic of the building and site, and provides a civic space to relax, learn and dialogue.

In this process, we three artists–Elizabeth Billings, Evie Lovett, and Andrea Wasserman–collaborated with innovative museum staff, scientists, lighting designer/programmers, LED lighting manufacturers, wind engineers, electrical engineers, structural engineers, metal fabricators, electricians, electrical inspectors, Vermont thought leaders, even a retired NASA mechanical engineer/applied physicist! We were not shy about reaching out to anyone who might share advice and direction. The project budget was modest and the design was ambitious. People were willing to help out, troubleshoot and brainstorm with us, largely for the joy of being involved in a project at the intersection of science and art. So many people we spoke to–even those outside Vermont–knew and loved the ECHO Center and were excited to be a part of this imaginative and transformational project.

In an effort to integrate sustainable practices, we sourced materials from responsible manufacturers and did as much of the actual installation work ourselves.

One exciting aspect of this project for us was the intersection of art and science, the merging of artistic possibility and scientific creativity. Here’s a story that exemplifies that merging. Initially, in collaboration with a University of Vermont scientist, we proposed that piezoelectric sensors within each rod convert rod vibration caused by wind into electrical energy to power the LED lights. Then an ECHO staff member, Travis Cook, told us about a Weather Underground anemometer on ECHO’s roof which sends a rapid-fire data update to WU and updates the live view of the station on their site. Travis suggested he could reconfigure the weather station so that it actually sent this live feed to ECHO’s own internal server. It would instantly forward the data back out to WU, but then at the same time he would configure it to read and process all of the data and generate a single OSC message, which our lighting designer Isaac Caballero could use to program a microcontroller to activate specific light colors and sequences for specific wind speed ranges. And all of this within seconds of the wind speed data being collected! ECHO was happy to contribute Travis’ time and to designate a specific computer for this function; we figured out the rest.