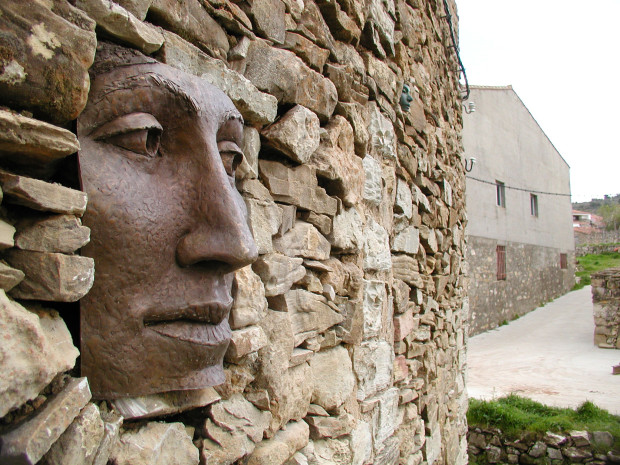 This sculpture was selected for the 2003-2005 Rincon de Ademuz Sculpture Biennial, Spain.
Designed for Arroyo Cerezo, this village like many others, is losing its young people as they leave to find work, so the artwork evokes the thought that the walls remember them.

We were invited to live in the village by José Luis Rodilla - one of the organisers of the biennial. Phil and Chris had stayed there during the previous biennial whilst making Phil's award winning Horse from local oak branches. Phil took photographs of the buildings in the village during the 2001 Biennial which enabled Diane to design Echoing Walls using photoshop to show how the faces would look set into the walls. For both biennials it was important to us to integrate the sculpture by making the work in situ and living there - this way of working resulted in friendships and awards.

With Chris Butler, the Director of Castle Fine Art Foundry, we drove across Spain to the village of Arroyo Cerezo where the sculpture was to be installed. During the week Phil fixed the work into the walls of an old building in the centre of the village, whilst Diane made more faces in wax for Chris to cast into bronze on the spot, seven faces had previously been cast at his foundry. It was exciting to cast some of the work in the village, it was a magical moment when Chris cooled one bronze face in the little stream that ran through the village. Eventually twelve faces were installed, eleven bronze and one glass (cast by Jackson Fawkes). Most days the few villagers left in the village would gather wild herbs for their evening meal, as they passed by they would stop and talk (despite our lack of Spanish and their not speaking English), but they communicated their approval of our project.

Chris also held a bronze casting event for all the sculptors attending the biennial. Echoing Walls was awarded the Silver Prize by the vote of the participating sculptors and is permanently sited in Arroyo Cerezo. Lola Perrin composed and played the music for the video 'On The Gradient Road - The Ritual'. Websites: Philip Bews and Diane Gorvin www.bewsgorvin.co.uk ; Castle Fine Arts Foundry www.bronzefoundry.co.uk ; Jackson Fawkes Glass www.jacksonfawkes.com; Lola Perrin www.lolaperrin.com