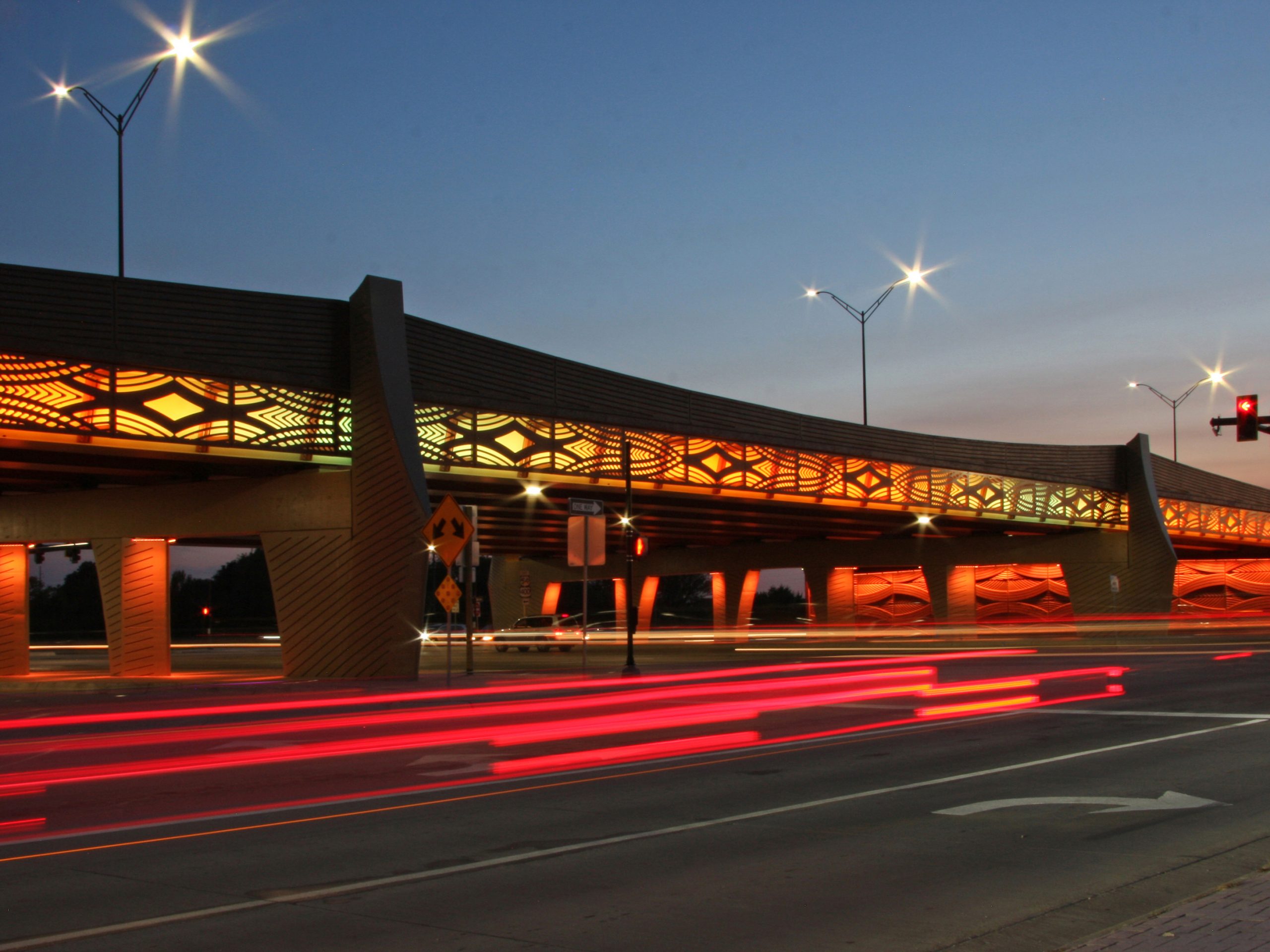 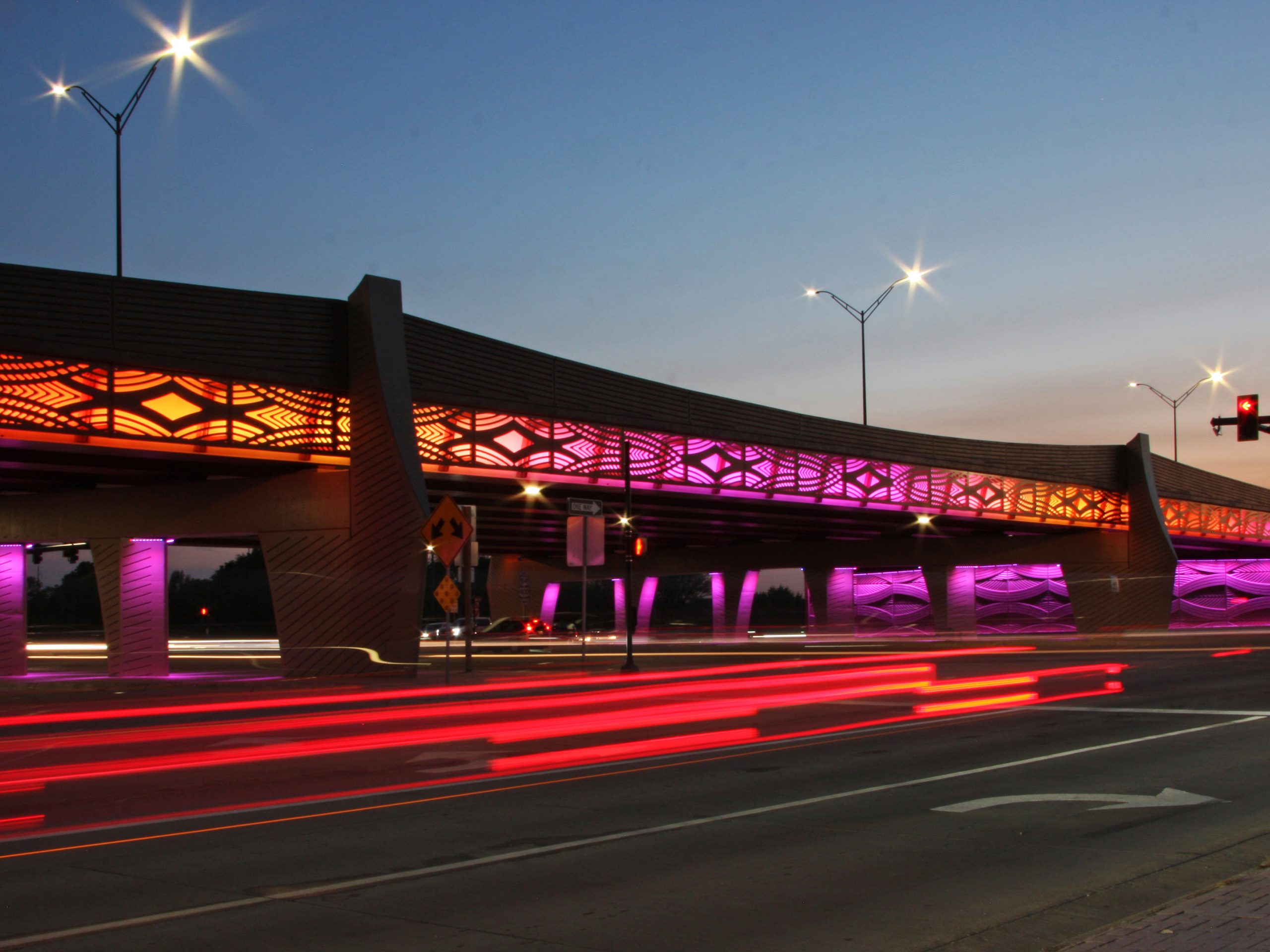 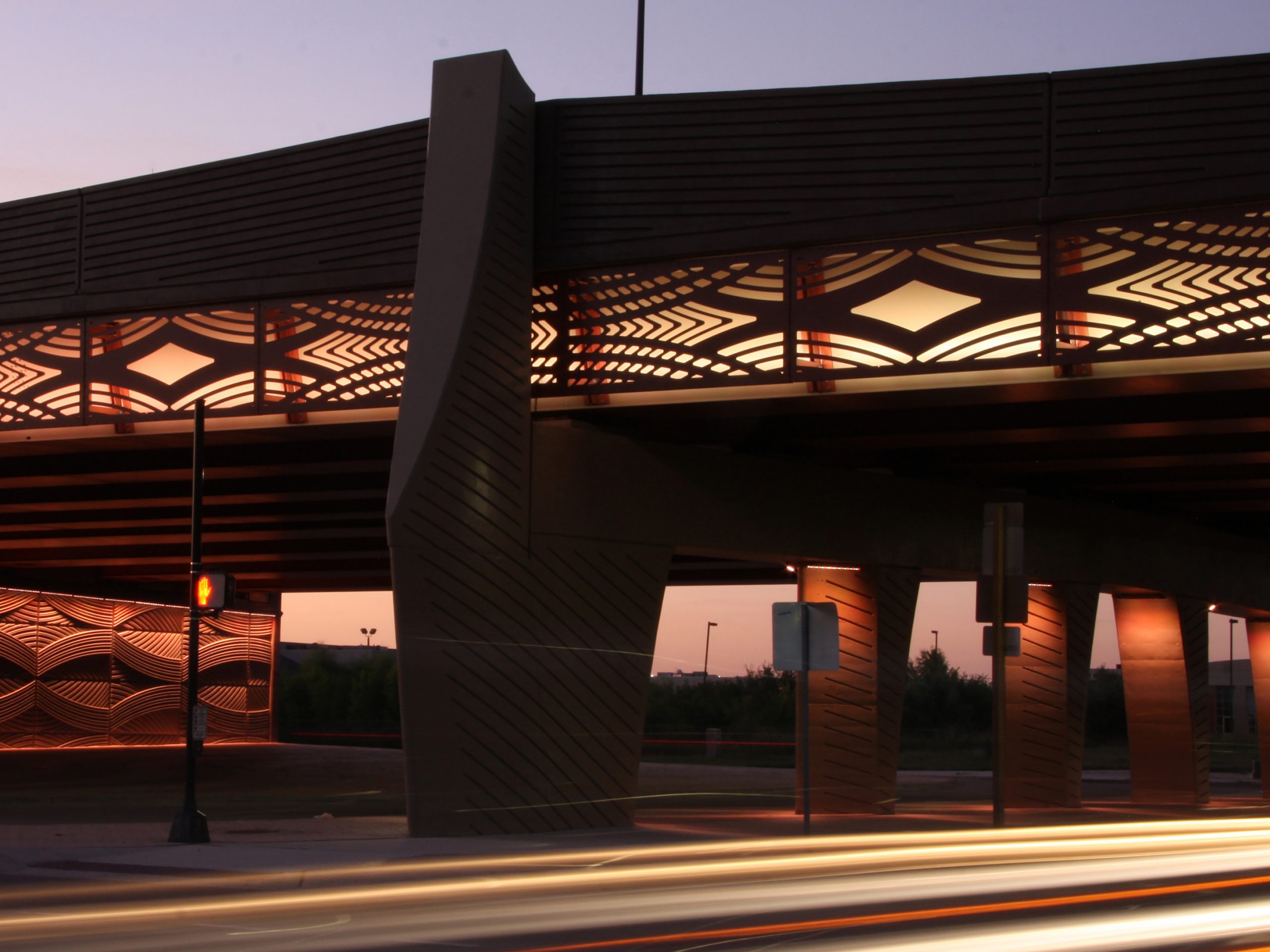 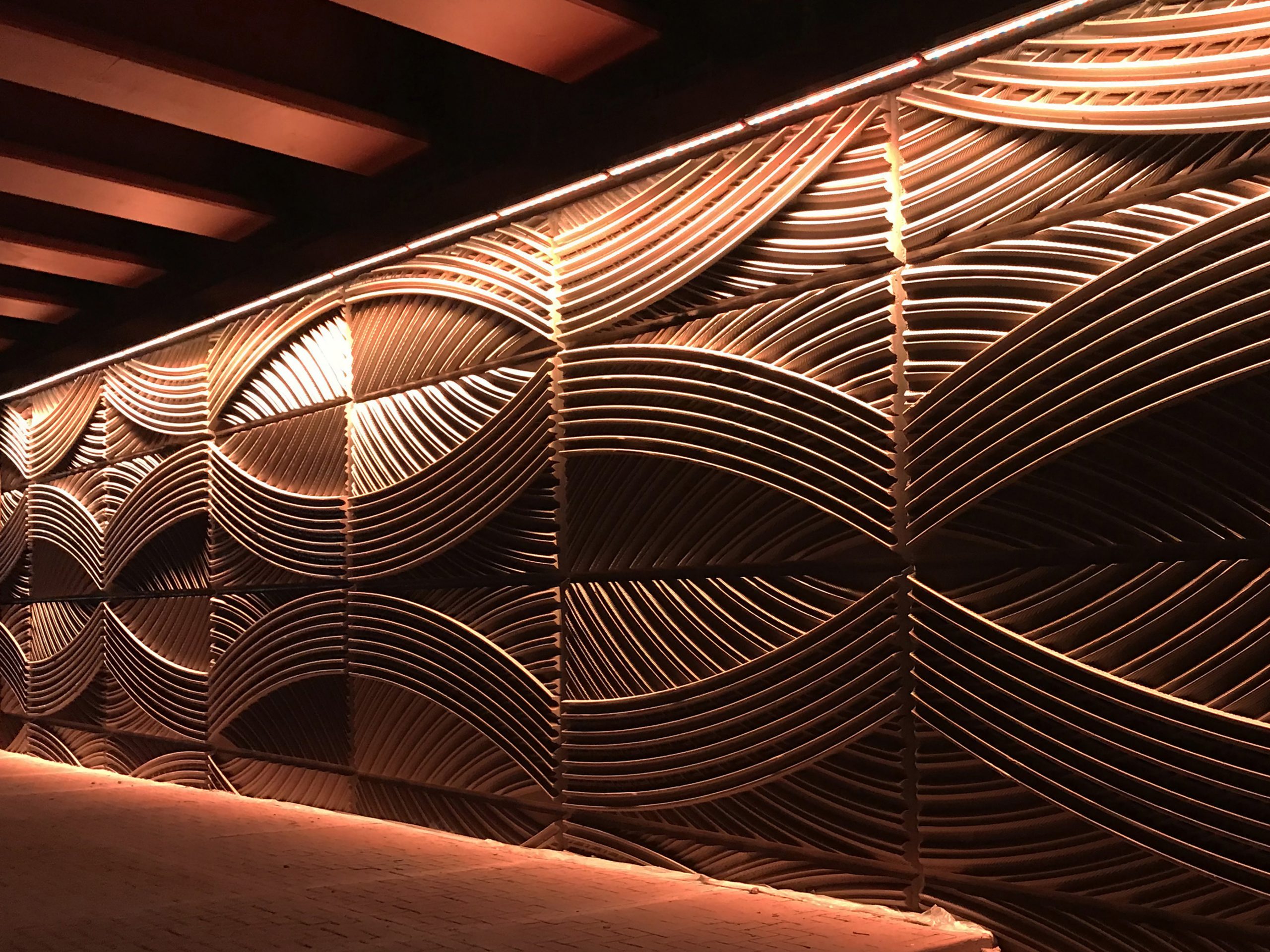 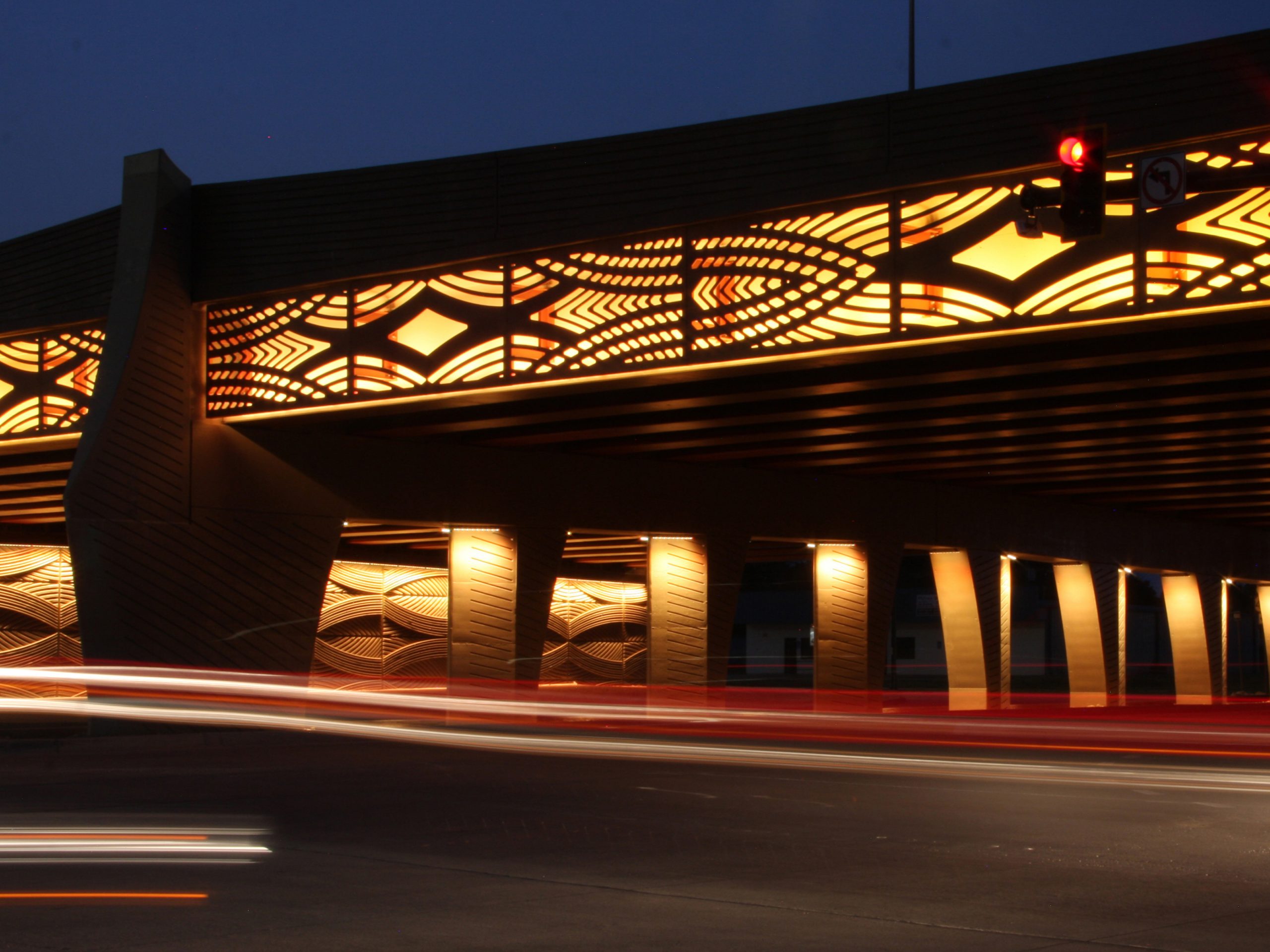 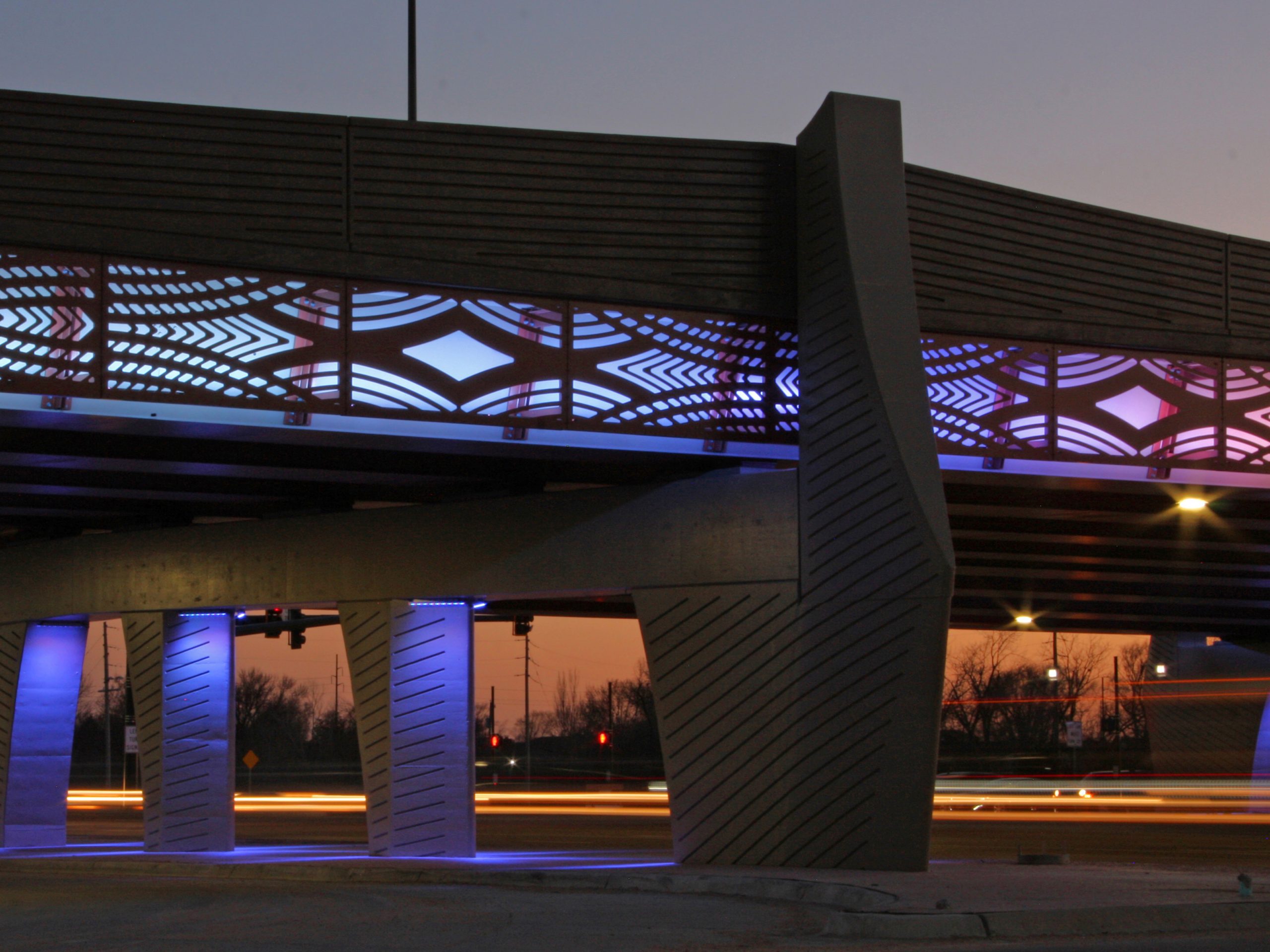 This project features highway interchanges and roadway improvements over 5 miles. It includes 3 bridges, custom concrete patterning, railings, grills, programmable LED lighting, and landscape enhancements. It features Wichita’s heritage inspired by flight, wind and the prairie. It involves interdisciplinary collaboration between Vicki Scuri SiteWorks, WSP and their sub-consultants. The first segment includes the Webb Road Underpass and 400,000 sq.ft. of patterned retaining walls that carry wind and prairie motifs. The second segment includes the Greenwich and Zelta overpasses that mark community gateways along the frontage roads. Landscape is re-vegetated prairie with an emphasis on sustainability and rain harvesting. At night, the bridges are transformed with programmable LED lighting shows, inspired by the seasons, holidays and community events. This project has exceeded everyone’s expectations, raising the bar for aesthetics in highway projects.

The goals for this project include:
• creating a series of neighborhood gateways along East Kellogg at the frontage roads that create a sense of place and anchor the project in the identity of Wichita.
• mitigating the mass of the infrastructure by introducing a series of curved forms echoed in barriers, piers railings, grills, and pattern design that slenderize the structures.
• introducing pedestrian scale and visual interest by working with pattern design that is activated by light and shadow over sculptural form, creating optical effects that enhance pattern sequencing.
• creating a unique project for Wichita, which is attractive and engaging both day and night, through the play of sunlight over form during the day, and at night, with programmable LED lighting that is transformative, inspired by the seasons, holidays and community events.
• promoting sustainability through the use of native plants and rain harvesting throughout the project footprint.

This project represents an interdisciplinary collaboration with WSP and its subconsultants. Vicki Scuri with Alexandr Polzin led aesthetics and they worked closely with WSP to shape the infrastructure making it contextual and responsive to its site. Inspired by Wichita’s aeronautical heritage, the native landscape and the wind, the team introduced a series of features that are integral with the infrastructure, transforming it from a series of generic structures into those inspired by place. The collaborative process included shaping piers, barriers, rails, and grills that are integral with the project structure. Also, the team collaborated on lighting design and lighting programming, creating a variety of shows that feature the seasons, holidays and community events. The lighting has become so popular, that the City now celebrates sporting events with light programming. For example, for the Kansas City Chiefs’ win at the Super Bowl, in 2020, by popular demand, the City ran the red and gold colors to celebrate their spectacular win.

“Very impressive! I am usually not a big fan of some of the artwork incorporated into transportation projects … but the LED lights and the artwork on the MSE and soldier pile walls on the current projects definitely seems like a worthwhile investment.” Donald Snyder, KDOT This project has inspired community engagement. The community has realized the potential of programmable lighting, how it lifts the spirit and promotes interaction. As a community request, when the Chiefs won the Super Bowl, the bridges carried their team colors: deep-orange and gold. Now, six more sets of team colors have been added to extend the celebration. Most recently, the community requested the City to turn the colors to blue and gold to support the Ukrainians. This project really reflects the spirit and heart of the community.