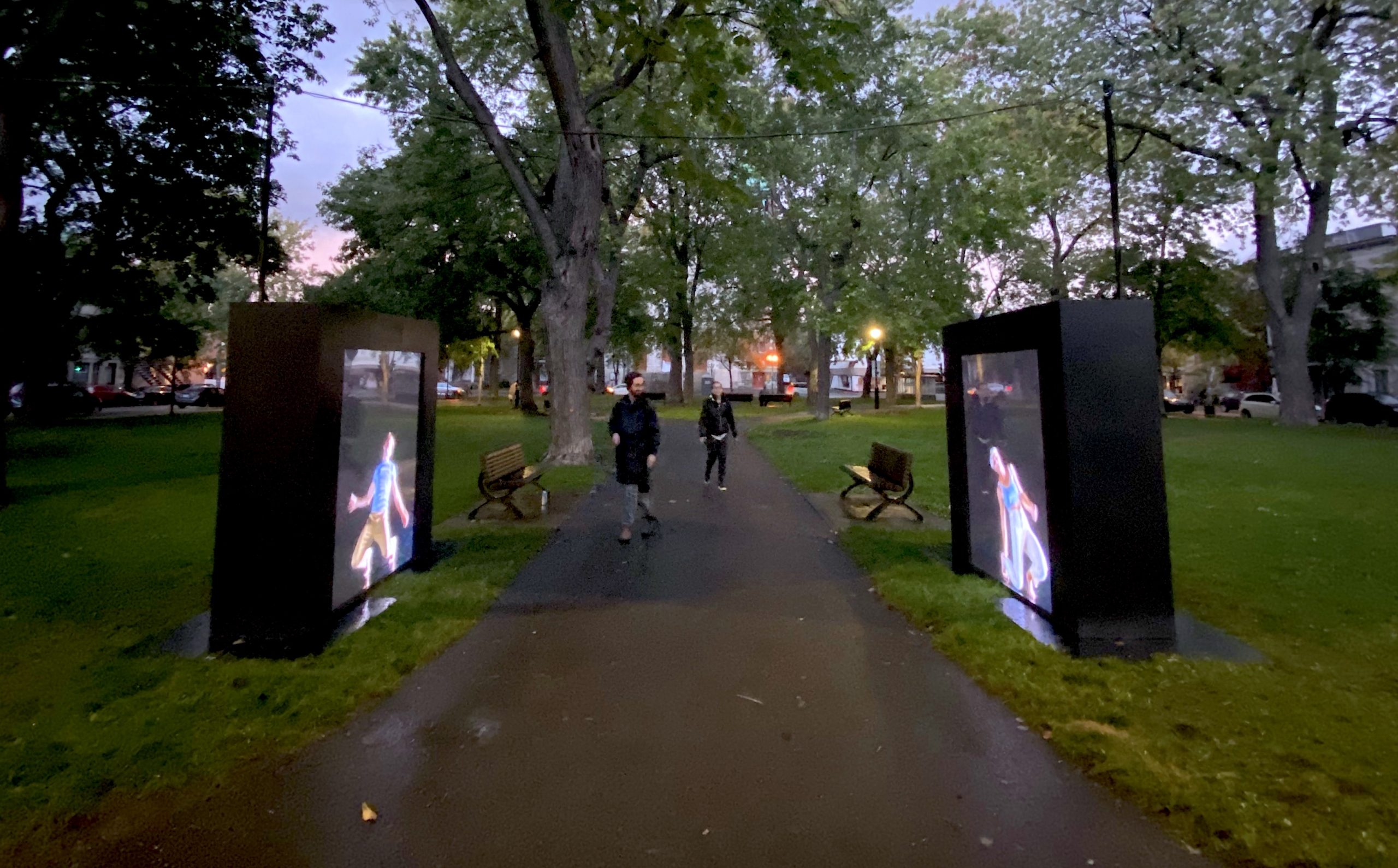 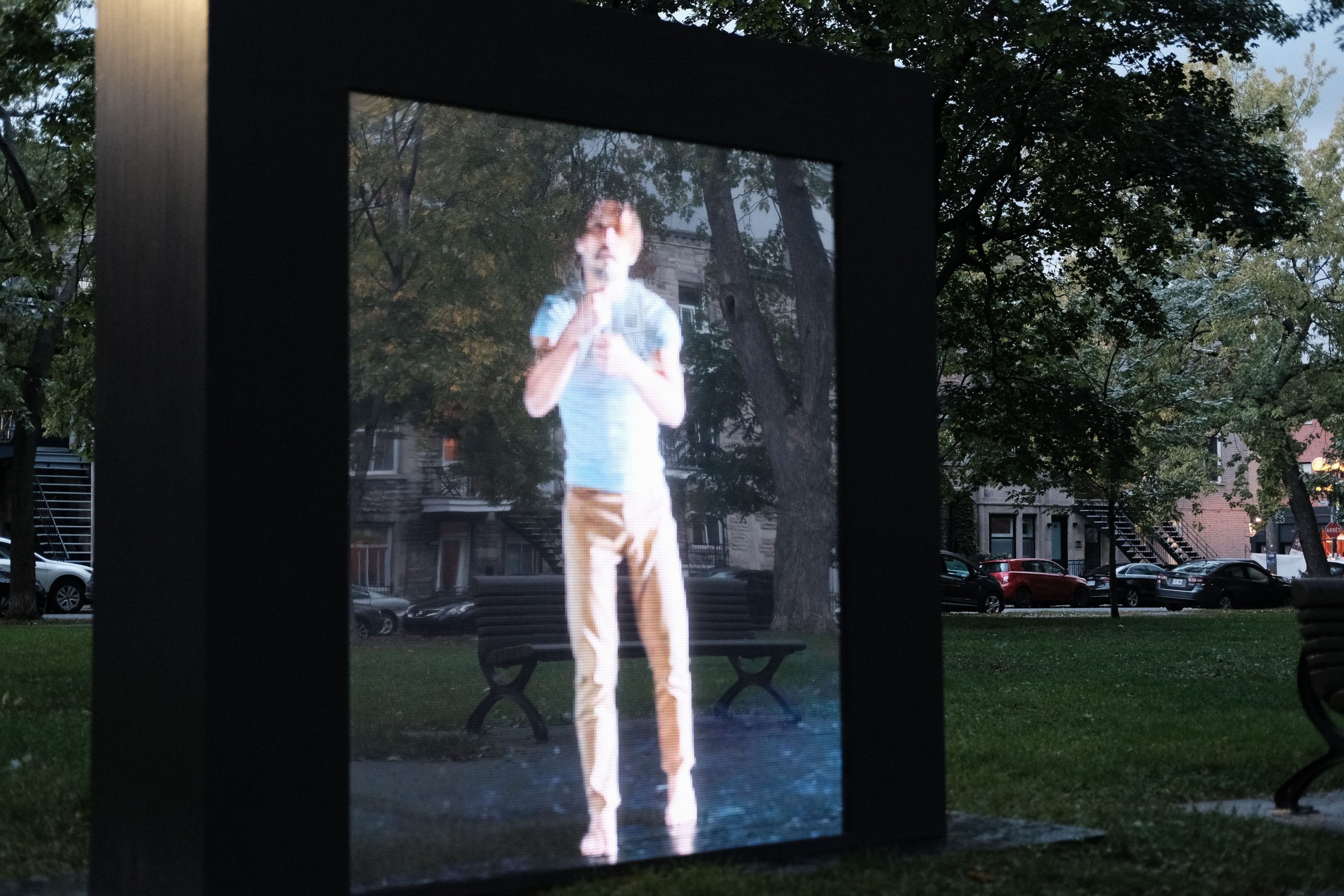 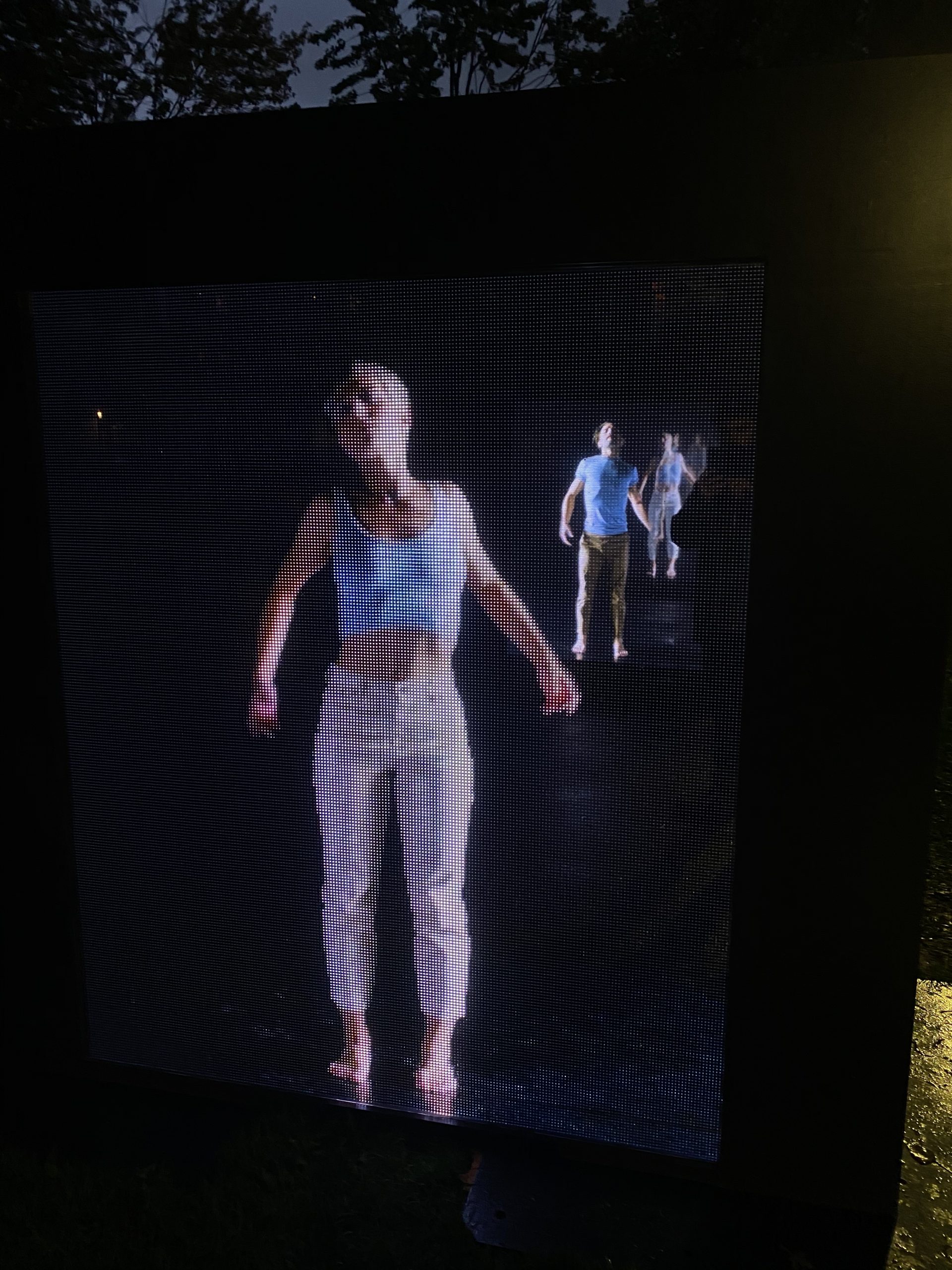 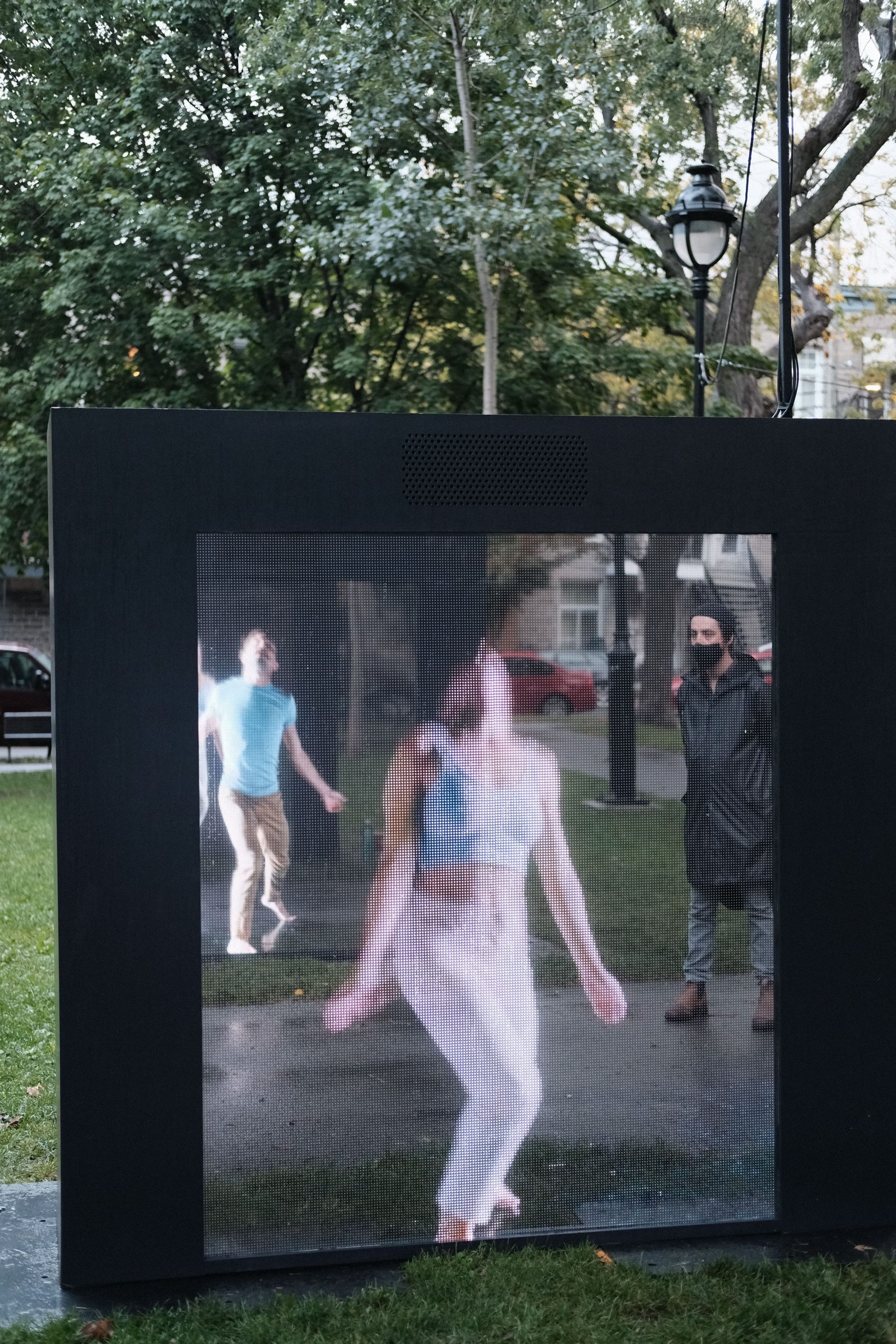 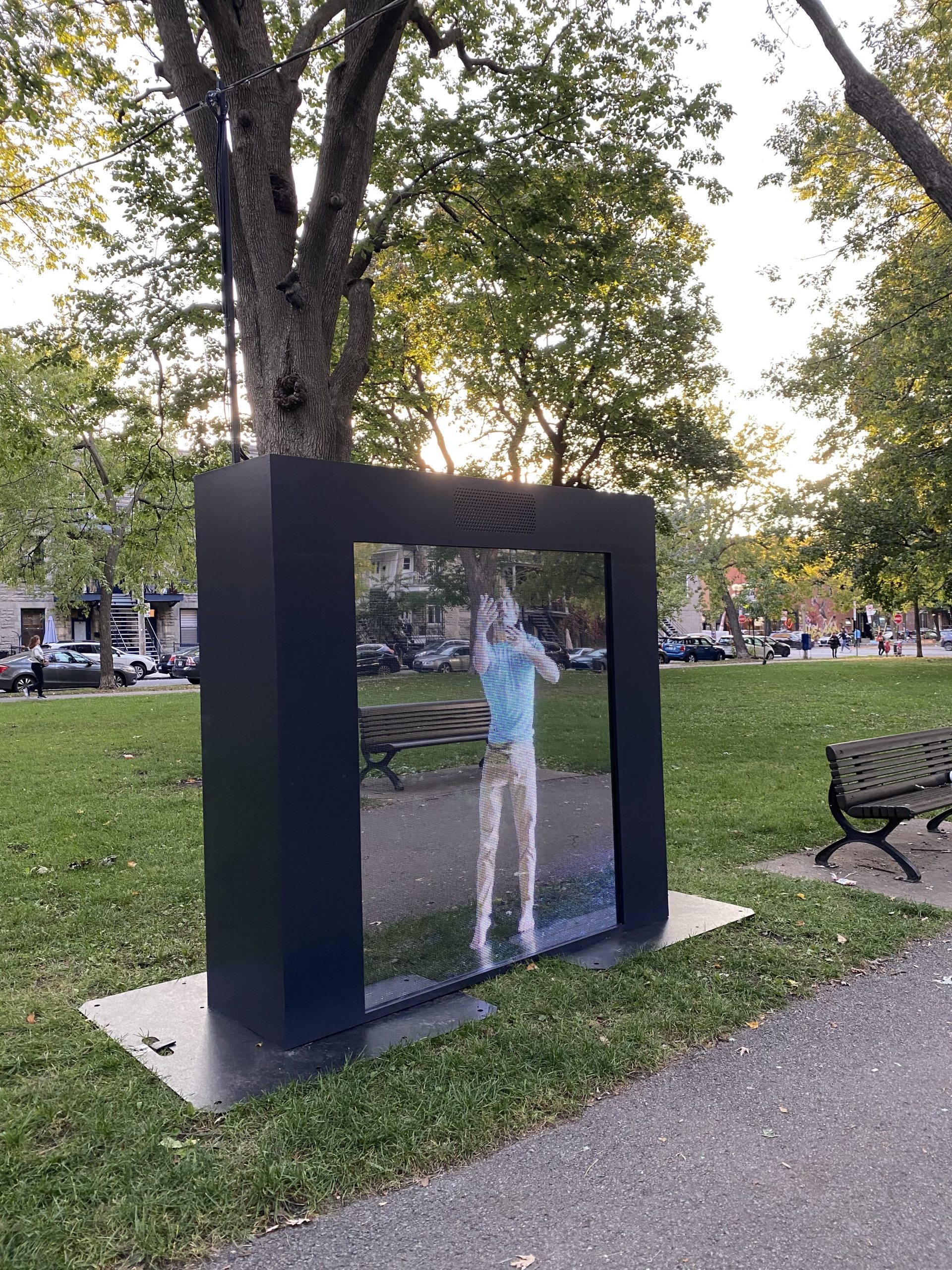 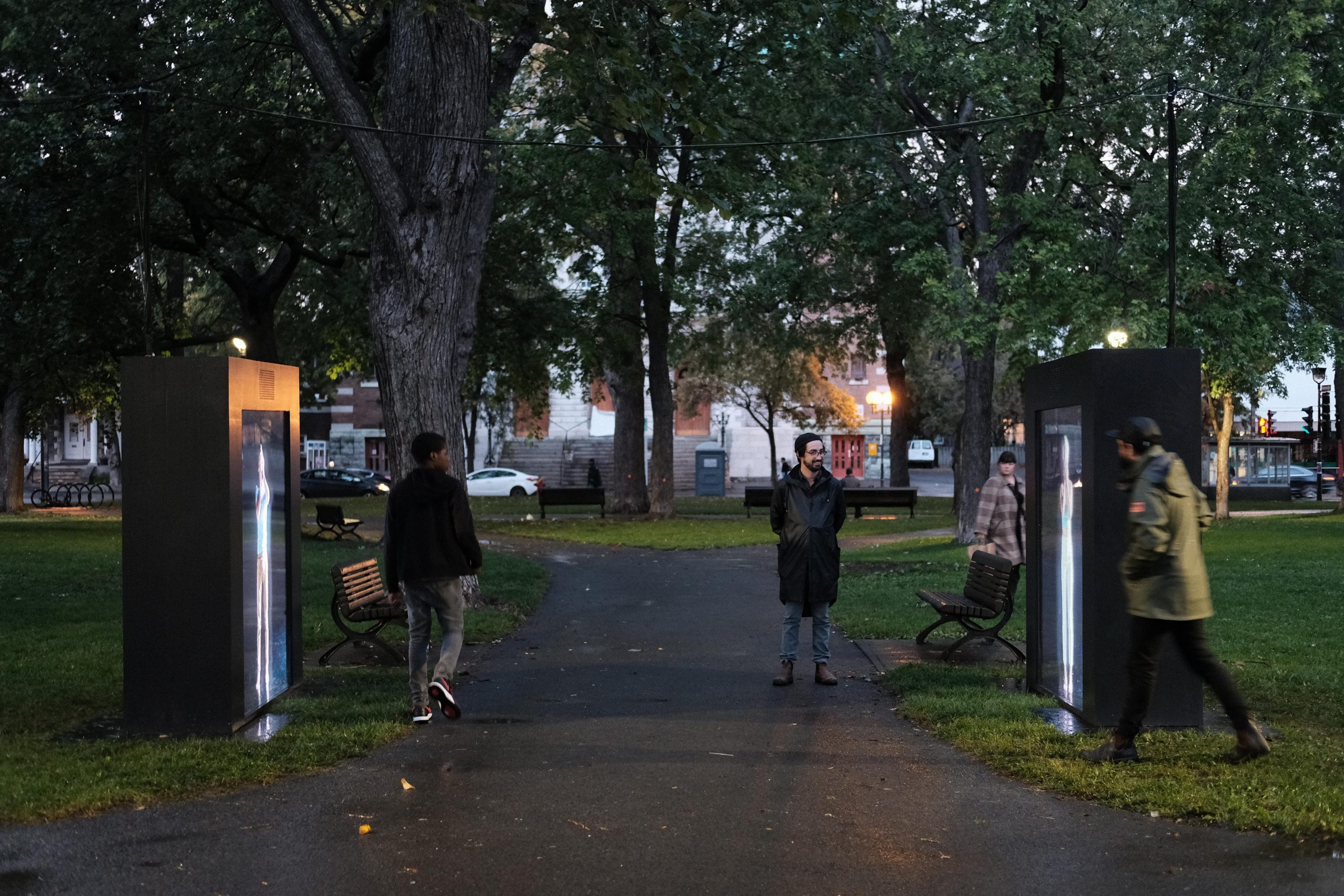 Client: This project was funded through the Montreal Cultural Development Agreement and the Montreal Reflex Agreement, concluded between the City of Montreal and the Government of Quebec.

Dance and public space in symbiosis
DUO is a digital installation that places the spectator at the heart of the distance that separates two dancers. In this reflection on the limitations and the distance created by the situation we are all facing, two dancers face each other, alone in their screen, separated by several meters. Even though their two moving bodies are in synergy, they will never manage to touch. The spectator is attracted by the light emitted by the installation and finds himself at the very heart of this ephemeral and immaterial stage. The dancers invite the public to witness their distant duet to the rhythm of a bewitching music. Creating a disruptive breach in the public space, the movement of the bodies transforms the surrounding urban space. The light generated by the moving bodies on the two powerful screens reflects on the street and surrounding buildings, ephemerally metamorphosing the architecture to the rhythm of the dance. This 5 minute long filmed choreography plays in a loop, drawing its audience into a cycle where temporality no longer exists
Materials: Painted and fireproof plywood case, tubular steel structure, plexiglass with mirror film, LED screens, speakers,control system
Screen in cm: W: 200 H: 200 D: 200
Overall work in cm:W: 200 H: 200 D:500

Virginie Brunelle's aesthetic, which emphasizes human relationships and their dramatic potential, is particularly conducive to this project. The situation experienced by the performing arts community has made the deployment of this digital installation even more urgent: as an art form, dance absolutely needs to adapt and gain visibility, to be seen and appreciated. Sensitive to the difficult reality of the creative world, we designed and produced this short choreography as a tribute to the dancers' craft, to their power, to their fragility and to their contribution to the beauty of the world.

The work is intended for a wide audience. Grown-ups and children alike will be captivated by the light that emanates from the work. Our goal was to create a universal work and give anyone a chance to encounter the world of dance and choreography out of its traditional framework. With Duo, we invite the public to linger for a few moments, from near or far, while avoiding any gathering.

DUO is the first instance of the encounter between the scenographic and multimedia approach of mirari and the choreographic poetry of Virginie Brunelle. The result is a symbiotic innovative and poetic installation combining two artistic visions and know-how. As bringing the audience to the theater and venues was not an option, we brought the dance to the audience. As much to keep this kind of encounters alive as an effort to democratize this art form.

This innovative and poetic project is a reaction to the exacerbated lacks and shortcomings created by the current situation, as well as the induced repressed emotions for dancers can no longer dance together. The two bodies evoke the pain created by this imposed solitude. They are projected on separate screens, two living spaces closed to the outside world. We used technology to try and bring them together and encourage reflection on this impossible encounter.

The bodies are presented in a life-size format. Through simple and evocative gestures, they express the need to be with and among others. The two dancers each perform a solo that expresses the desire to enter into a relationship; two solos that act as a duo. This digital setting allows two performers to come together and give the impression that they are almost touching.

From a physical point of view, the work is composed of two weatherproof LED screens. It is important that the dancers are on a human scale so that the spectators can easily identify with them and become part of the installation. The back of the screens is covered with a sober and reflective surface so that it blends harmoniously with the environment. The light generated by the screens, in addition to the physical strip that connects them, creates a luminous disruption perpendicular to the street, breaking the daily routine. The image of the dancers is reflected on the opposite screen, re-creating a duo in an infinite and intangible space. The spectators are also reflected to create a life-size relationship of proximity with the dancers. The sober and refined aesthetic and approach of the video content aims at placing the work under the sign of elegance. The shooting of the duet was done with two cameras, thus allowing for the distancing of the artists and artisans as well as providing a monochrome version and another in color for a greater variety of nuances in the final work.