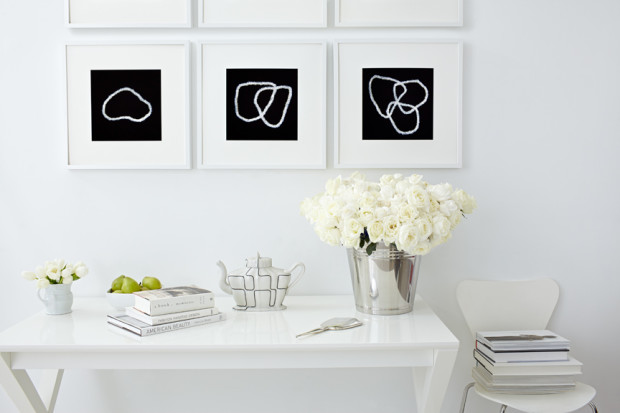 Lyn Horton's art was the designer's first choice and the room was designed around seeing the art. The pieces are initially viewed above the desk, but are dramatically and purposefully reflected in a large mirror. Technically, this was a commercial project, even though it was the design of a residential bathroom. The interior designer wanted to express architectural luxury and redefine American Standard’s idea of America’s bathroom, to a new consumer base.

This series of art was selected, to command attention and provide a modern counterbalance. The design’s white and crisp aesthetic provided the canvas to see Lyn Horton’s work, while each further decorative touch is in support of her usage of black and white.

The use and placement of Lyn Horton’s art pieces are at the core of the project's success, artistically, architecturally, and as a vehicle to communicate the desired luxurious value.