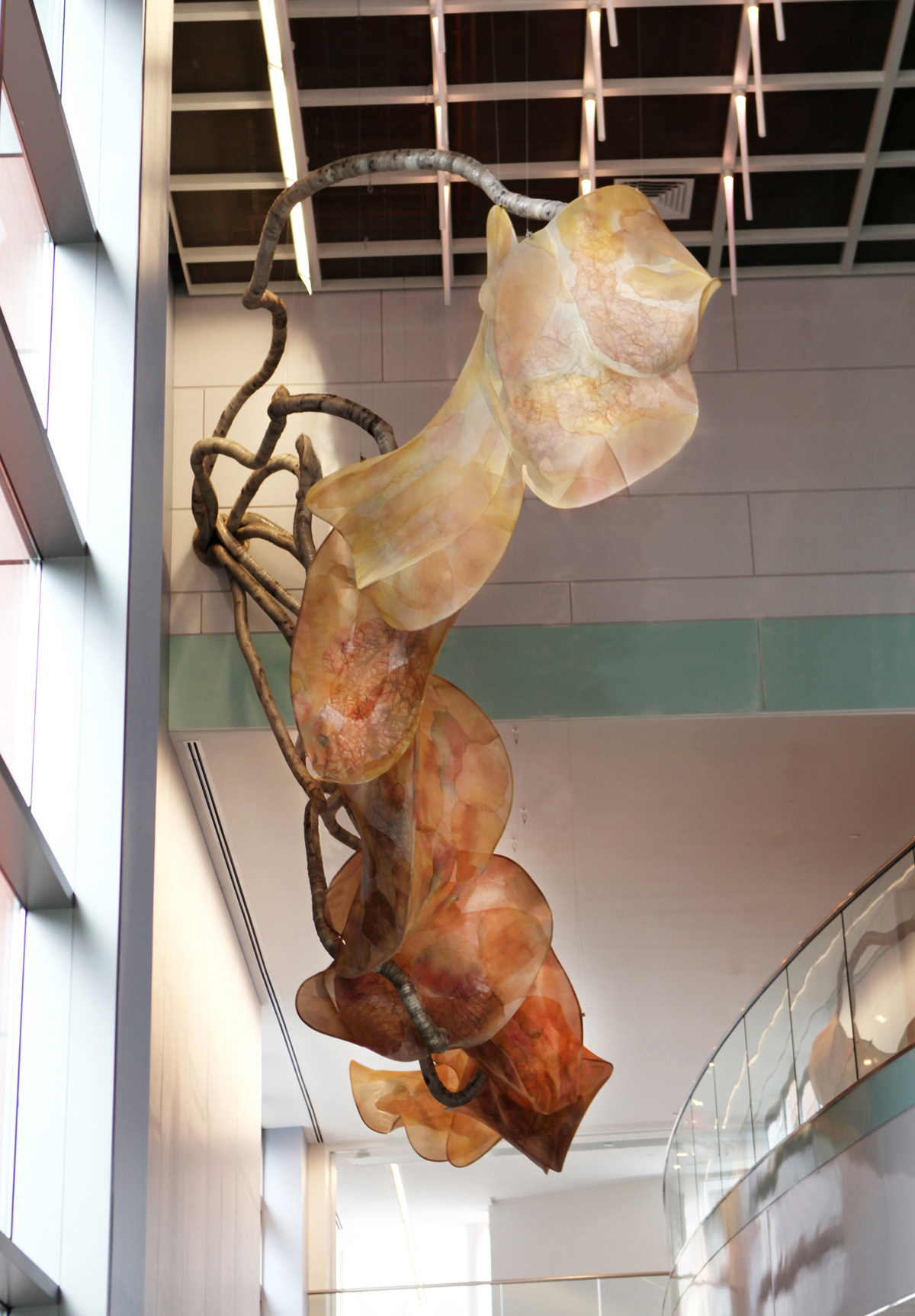 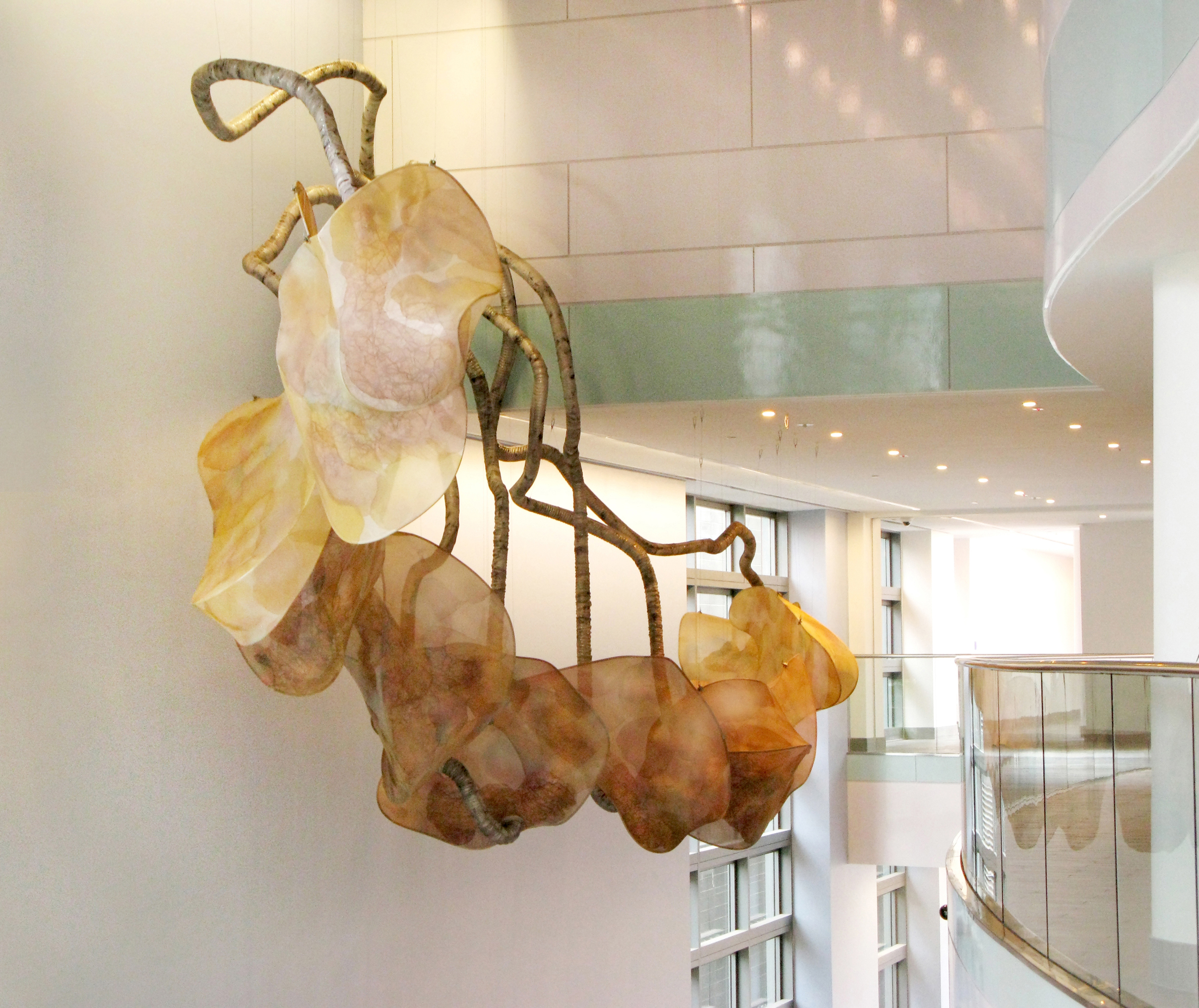 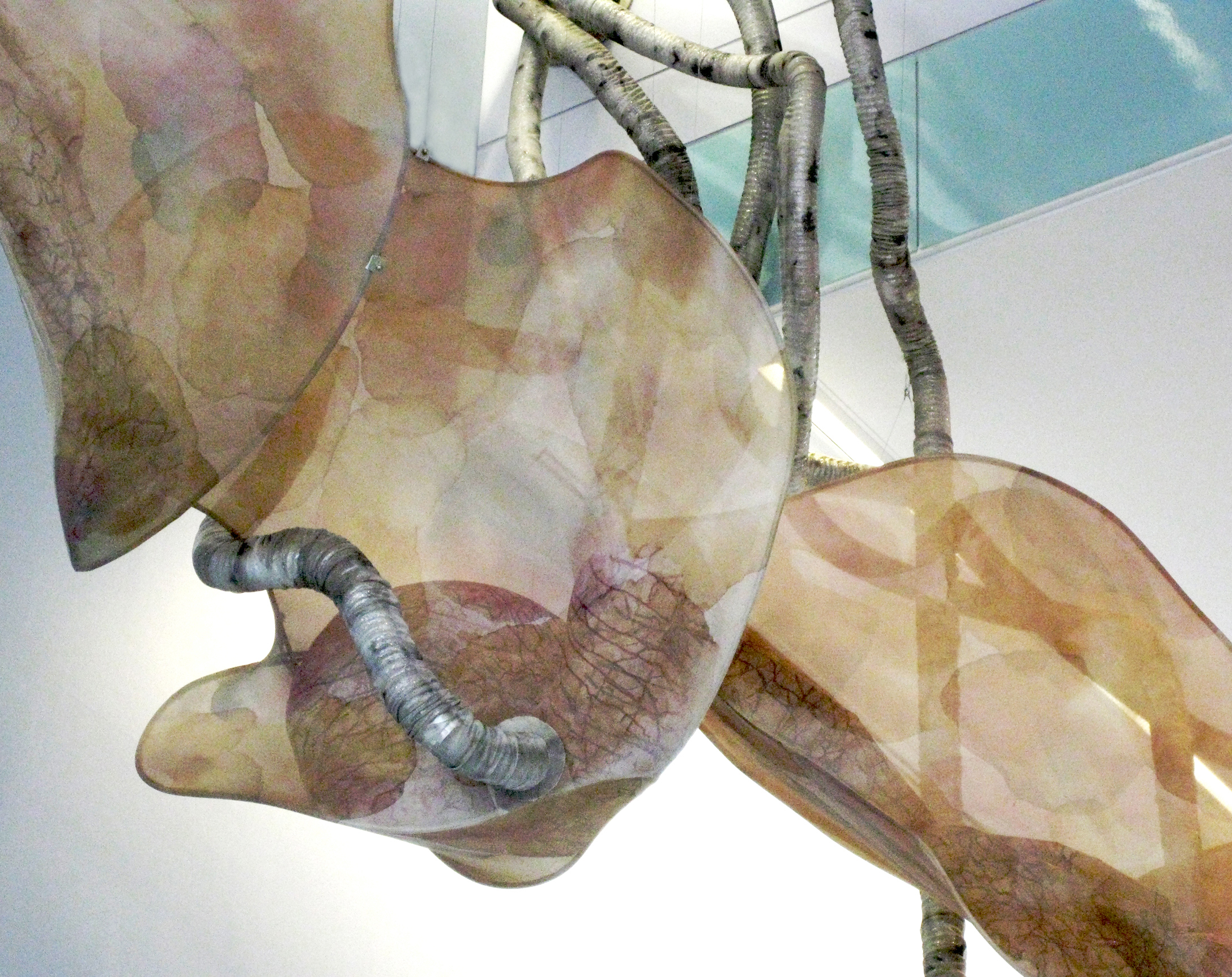 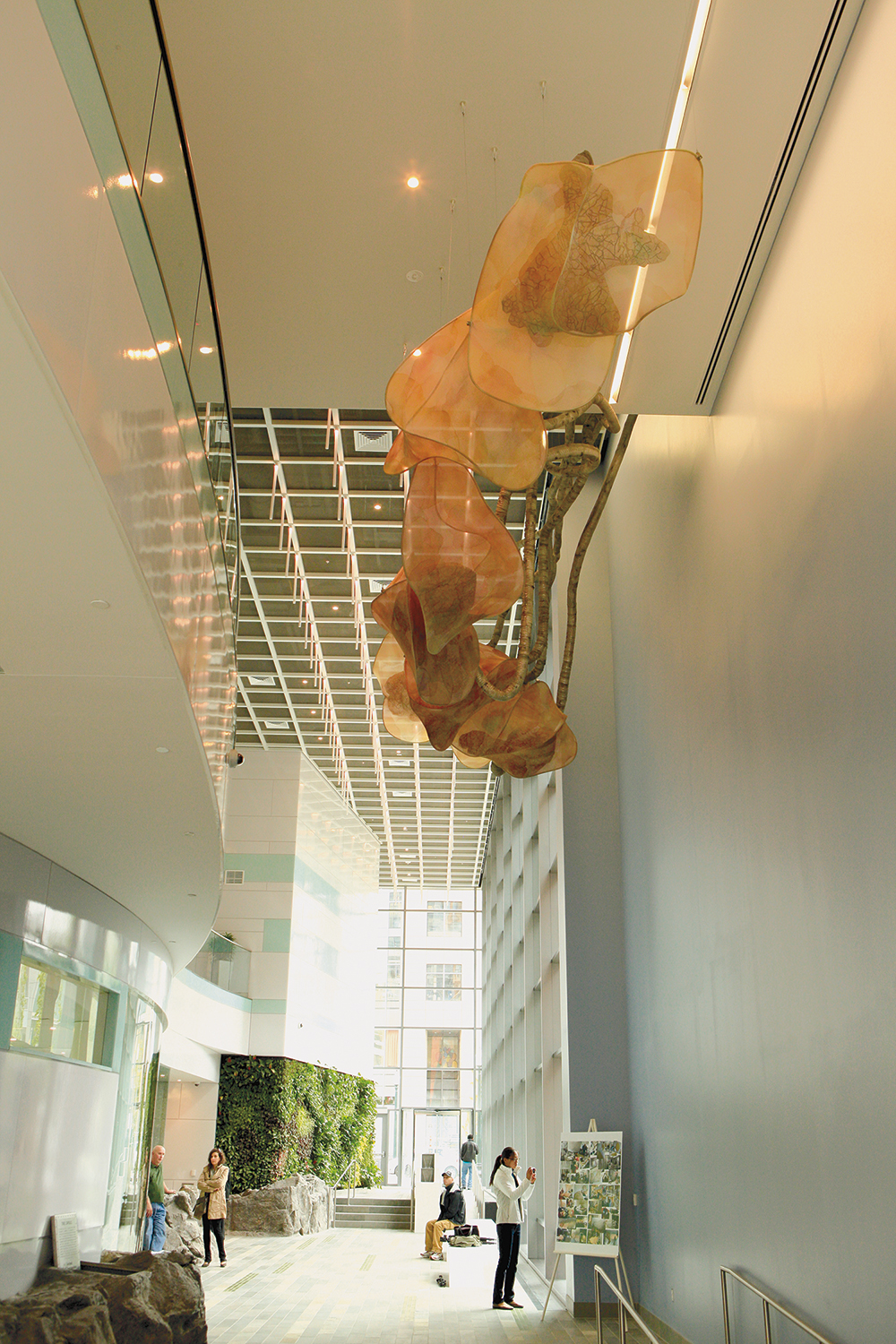 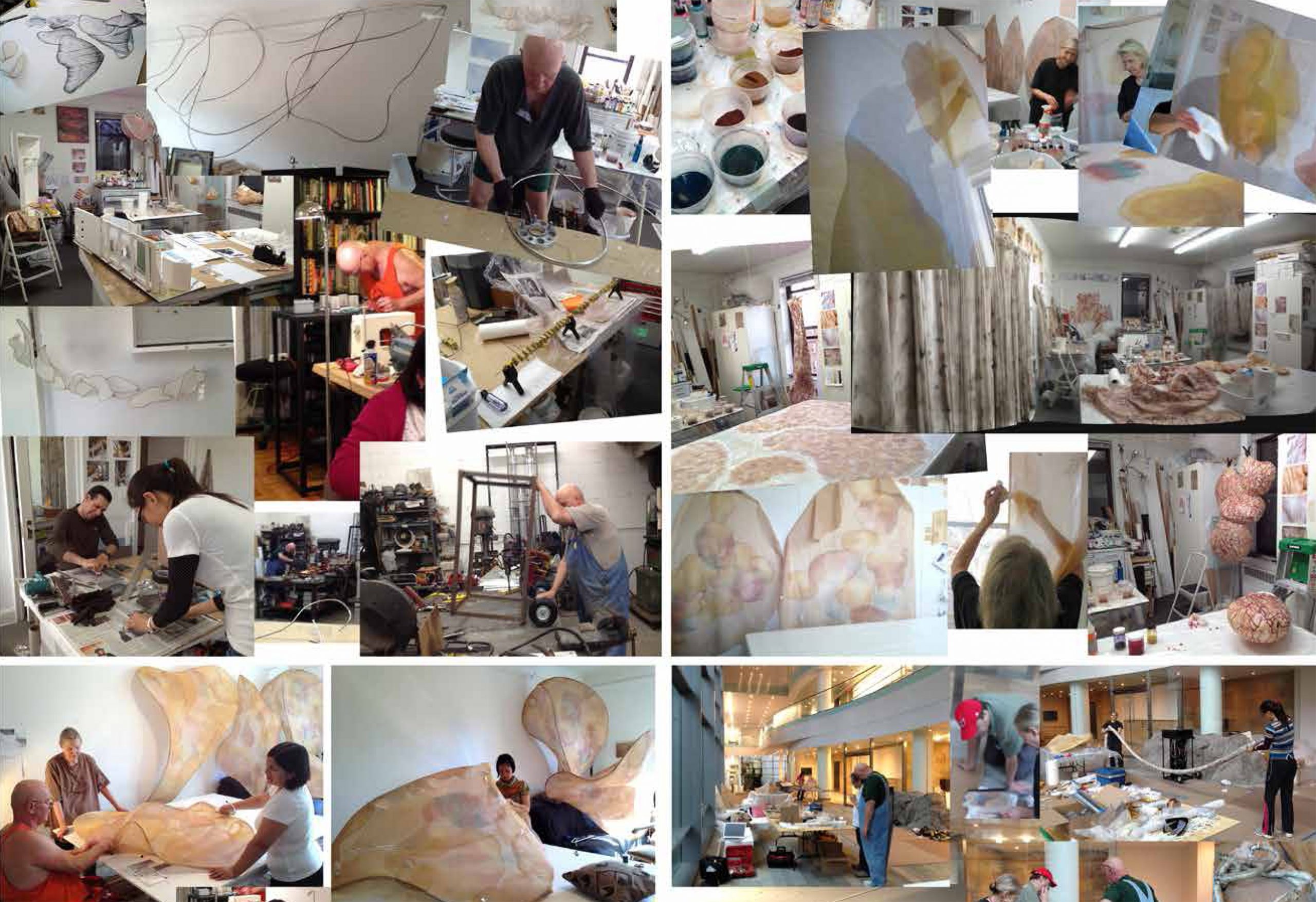 Decem Aspirare (Ten to Breathe) is a site-specific sculpture that breathes. United Therapeutics Corporation, a biotechnology company, commissioned the artwork for their new building in Silver Spring, MD. Creative Director Bill Rock wanted an atrium sculpture that breathed – a sculpture that reflected their history and future.
The sculpture is based on the bronchi, the organs that feed air into the lungs, and the lungs themselves. These organic elements have been transformed into a self-sustaining and biomorphic construction, which appears to exist independently as a living organism.

The primary requirements for the sculpture were quite specific. It had to relate to the space, deal with the bronchi, and "breathe." I began working with the biological shapes of these organs in order to arrive at the abstract forms that would carry the breath. I decided on a translucent fabric for the forms’ outer skin so that an interior breathing shape would be visible. I calculated that ten forms would be needed to create the required mass. The atrium is a very long, narrow space with curved walls and multiple levels. The exterior wall and two entrances are predominantly glass. My decisions kept the physical properties of the space in mind. I was concerned that the forms connect harmoniously as they move through the space, becoming a dynamic element of the space. The final form of the sculpture could not be determined until installation, because the routing of the hoses could only be done on site after the forms were suspended. The walls and ceiling could then be factored in as constraints.

With this commission, the sculpture had to be completed for the opening of the new building. This limited the design and construction time for building the sculpture and made it essential that a team was put together to work on the project. Very quickly the team came together - an art major from Taiwan, a design consultant from Hong Kong, a seamstress from Ecuador, an engineer from Queens, a Peruvian restaurateur who generously offered temporary gallery space for the sculpture and Carol Rubenstein, the Art Consultant. Divisions of duties with daily problem solving kept us on a schedule that worked with the installation deadline.
Besides a great working team, the diversity of the group became the base for the color of the exterior forms. I photographed the hands of the team – these photos provided the colors used when painting and dying the fabric for the outer skins.

Eight of the forms have visible interior breathing bags connected to hoses that rhythmically transfer air to and from concealed blowers. The air blowers are timed so that the forms continually change breathing patterns in relation to one another. Because the lines of tubing and hose can be seen through the overlays of translucent fabric, the sculpture is also, in effect, a drawing that traces the movement of the breath through the space. They are the connectors, the feeders, the roots, the blood system and the umbilical support for the breathing forms.