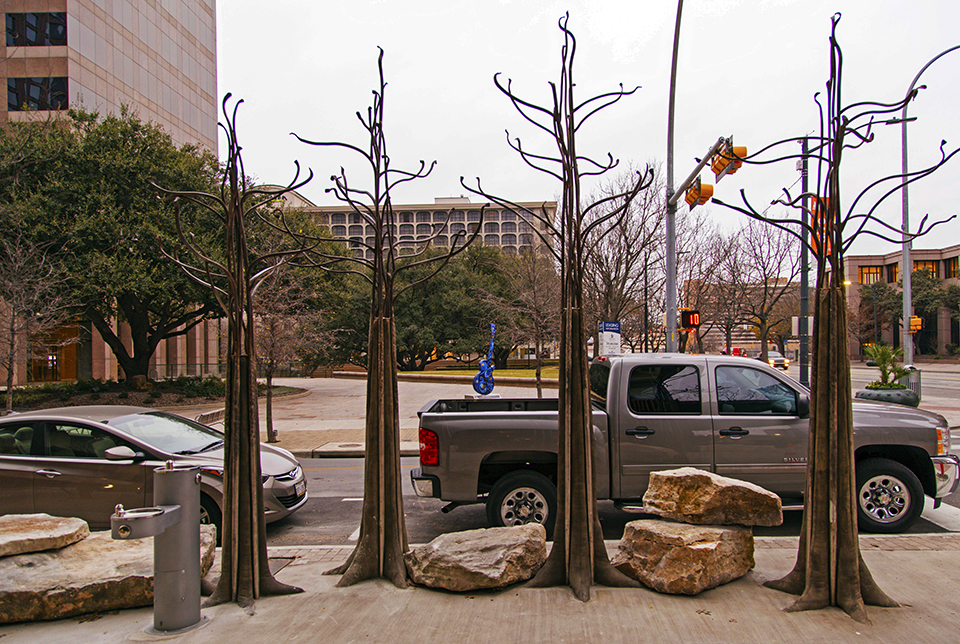 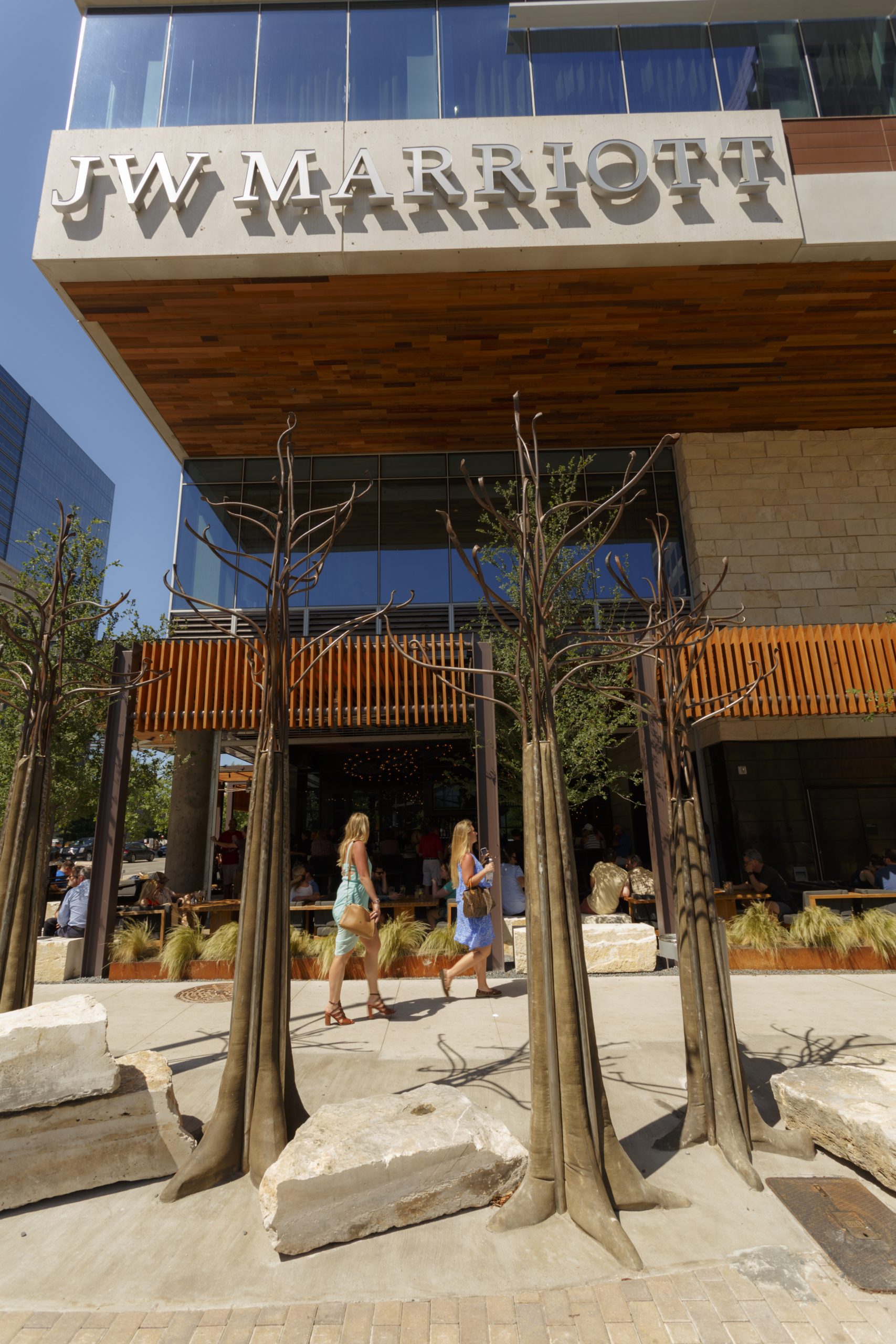 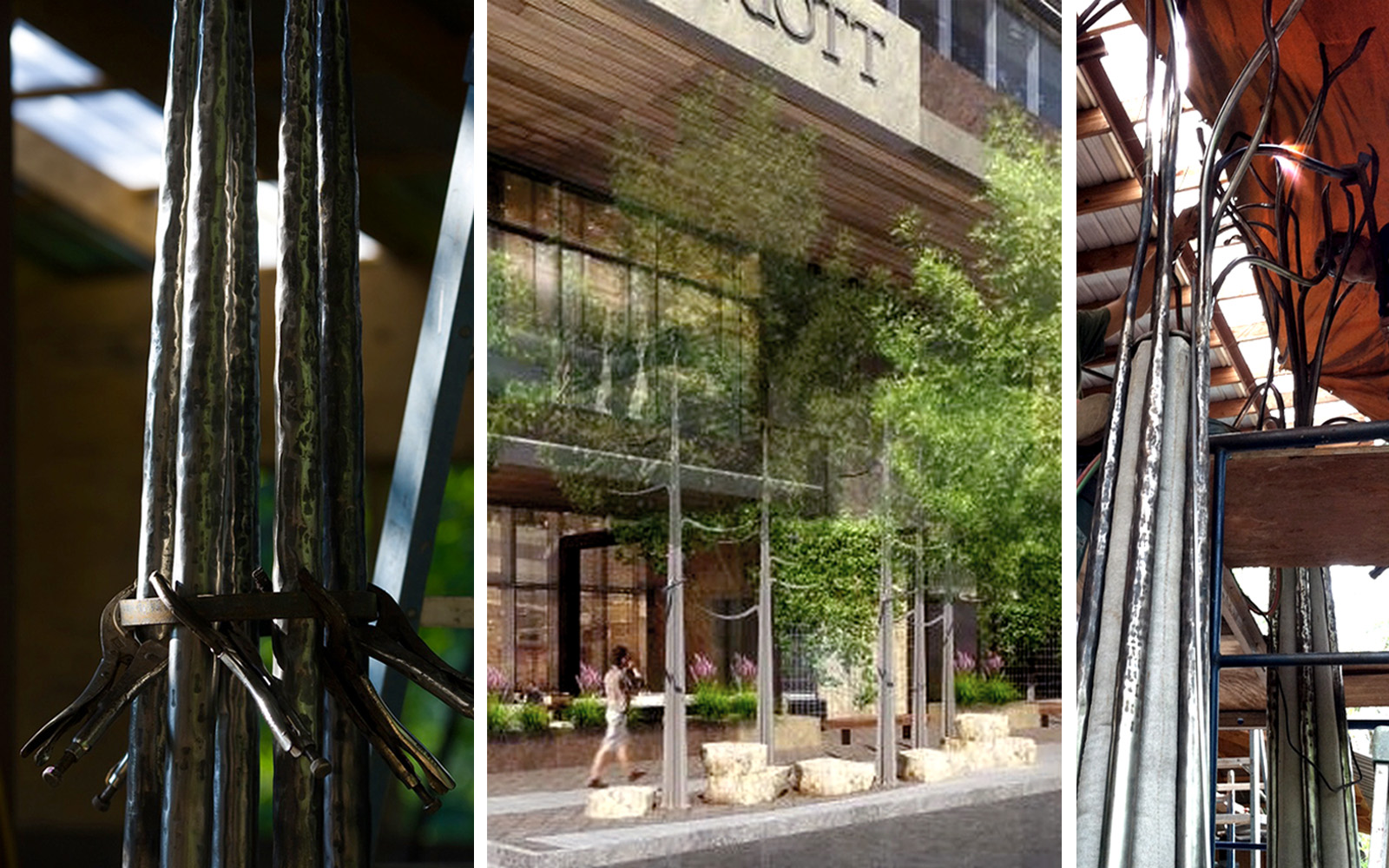 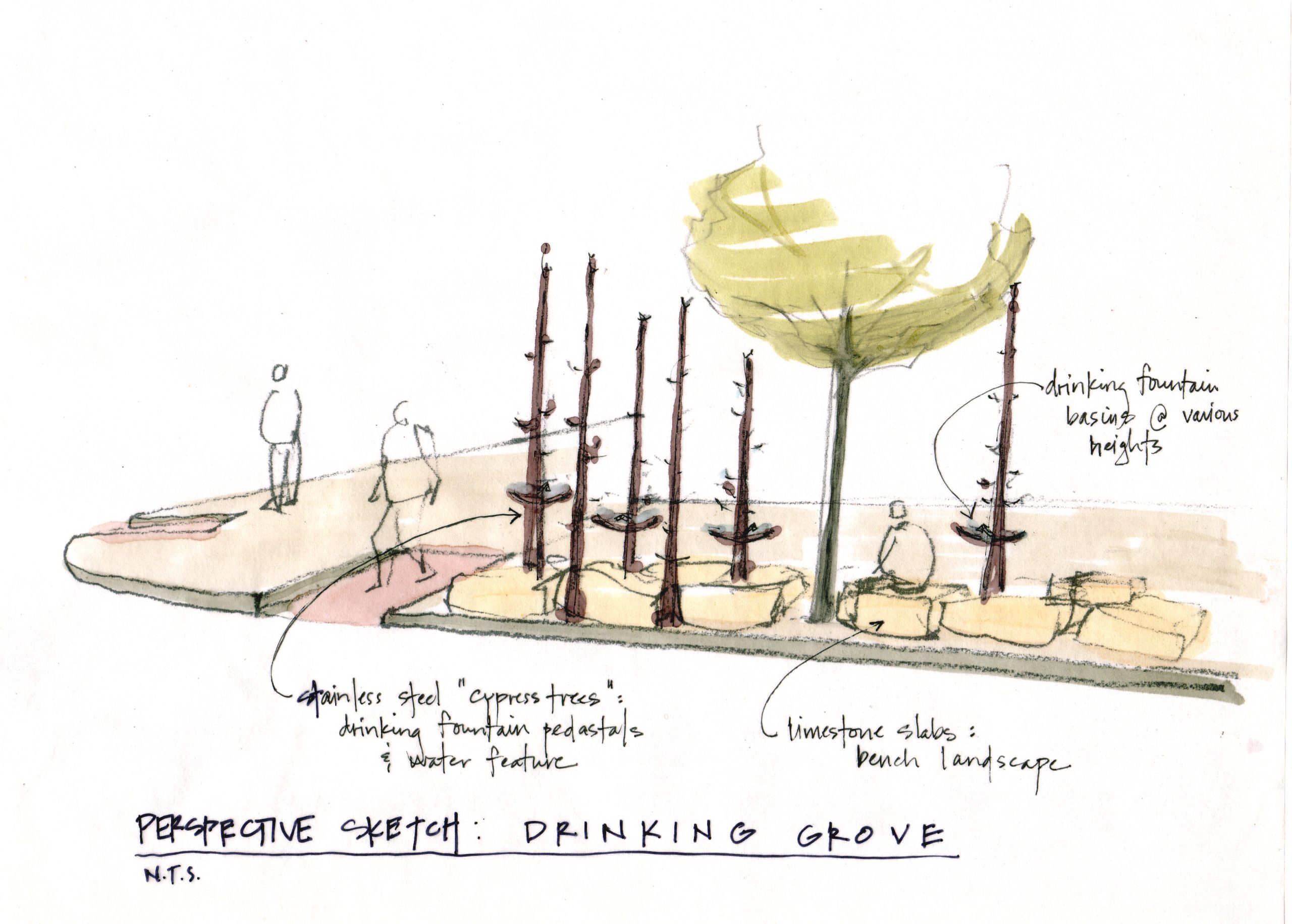 Inspired by the rivers of Austin and its region, Cypress Grove is composed of a series of sculptural trees wrought in fabric-formed concrete and forged stainless steel. Ranging in height from 7’ to 13’, the fluted trunks open up into whimsical canopies of undulating branches, interspersed with natural-hewn limestone seating boulders and a drinking fountain. Situated on the prominent downtown corner of Second St. and Congress Avenue, the Grove extends the outdoor living room of the ground floor restaurant of a busy new tower hotel. This interactive piece offers a materially crafted and tactile point of repose.

The City of Austin AIPP program sought artwork that reflected the local concern for water, the profound relationship Austin has with its rivers, creeks, and spring-fed pools. Equally, commissioned art was to occupy a place in a suite of public art works to be developed for the Second Street corridor, an urban street revitalization and design project in one of the most active and vibrant part of downtown Austin, a few blocks away from Lady Bird Lake. Another goal for the piece was to be of its place, to embody the lively, creative spirit of Austin culture and appreciation for the natural environment.
The concept of Cypress Grove was rooted in a sort of Austin timelessness. The artwork provides an oasis, affirming to residents and inviting to visitors. The piece was realized with a stature that would hold up against a noisy urban backdrop, very sturdy yet soft in composure and organic in form. Reflecting Austin’s artisanal vibe, well-detailed and with unique material character, it carries a sense of stillness in a sidewalk setting amidst the daily bustle and the throng of festival crowds for which the city is well-known to host.

Concept development, design, maquettes, fabrication, and installation of the sculptural piece involved a long collaboration over years, led by creative partners Lars Stanley and Lauren Woodward Stanley. A key creative and material collaborator was artist Ryan Coover, who contributed his expertise in fabric-formed concrete. A series of plaster and concrete mock-ups allowed the team exploration into how best to achieve the variegated sculptural tree forms integrating the two primary materials, steel and concrete, in a cohesive way.
The project also needed to accommodate other City of Austin efforts and programs such as Great Streets and the Second Street corridor design, which produced guidelines for treatments from walkway widths and street trees to lighting, pavement finishes, and seating. Finally, as the project neared completion, many site constraints presented themselves during planning and installation, as construction on the J.W. Marriott hotel simultaneously came to a fast close. The resulting project successfully complements the hotel restaurant and streetscape with its palette and form, and vice versa.

This project had a long gestation period, which made its realization that much more rewarding. Awarded in 2007, the commission was put on hold during the following economic downturn, and in response to the timeline for the development of the primary property on the city block. Back on track 7 years later, the design for the project garnered the advantage of refinements in the design and doing several trial mock-ups. It will weather many more years in its permanent spot, offering a seat, a people-watching station, and a drink.