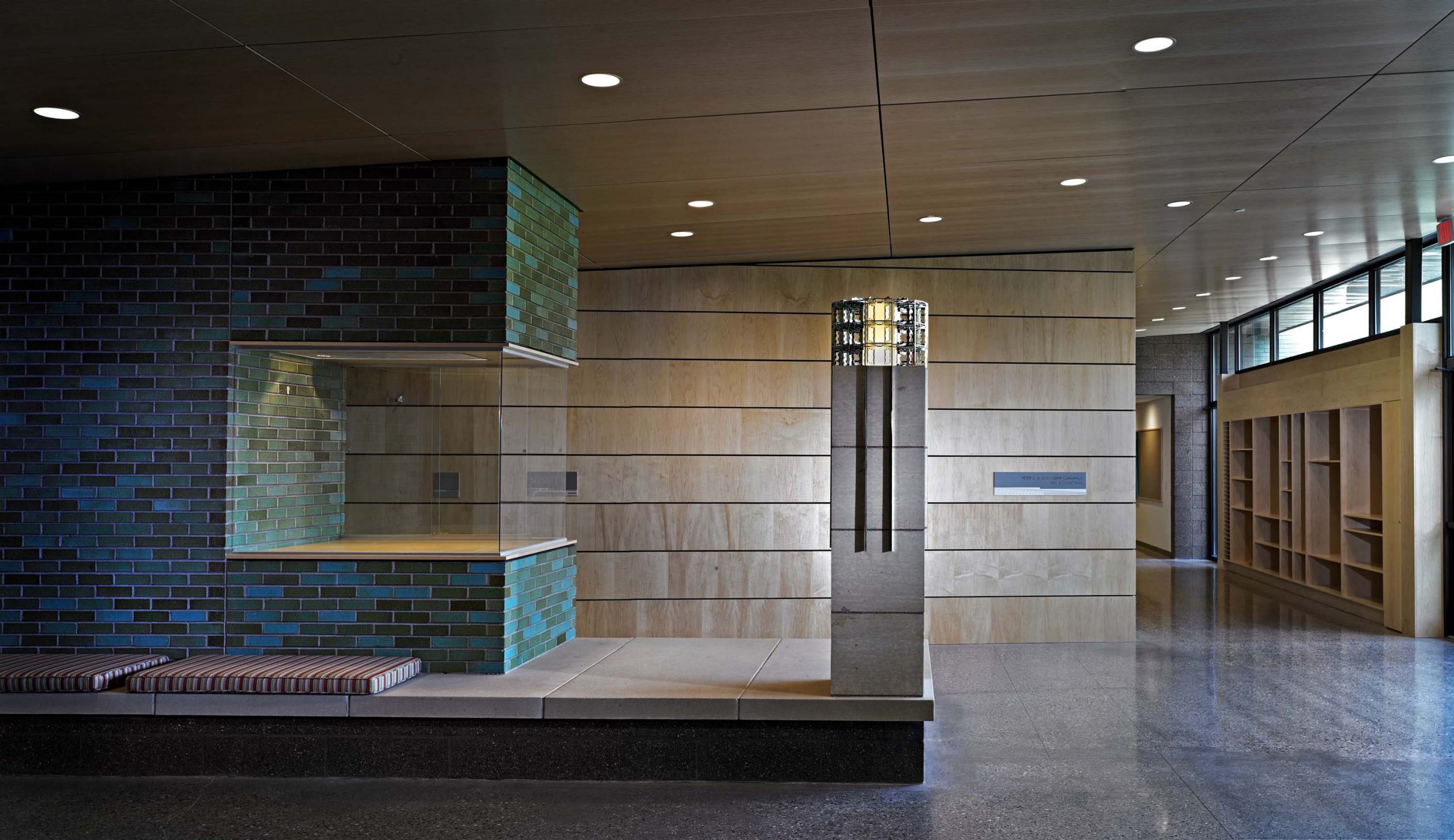 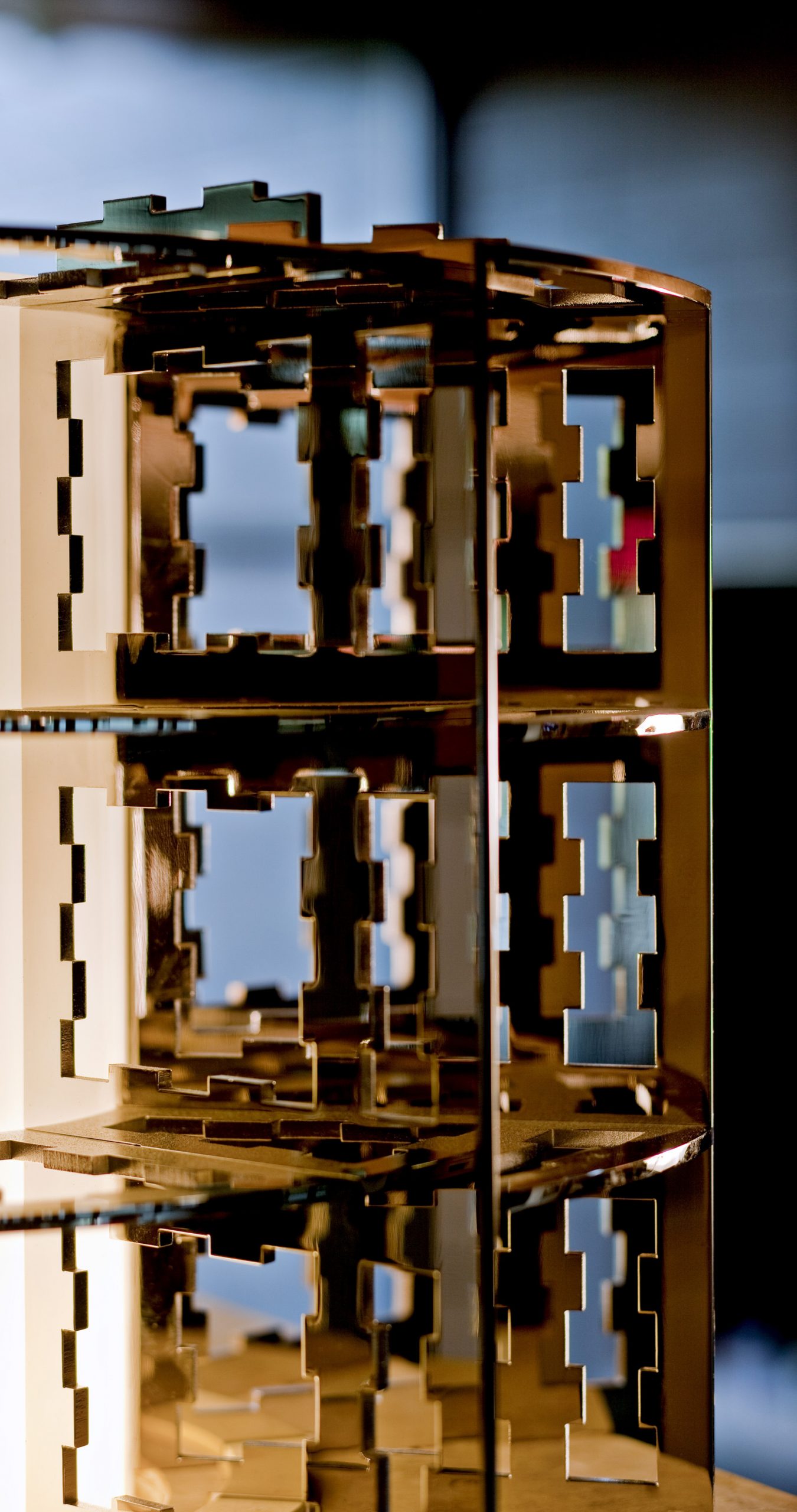 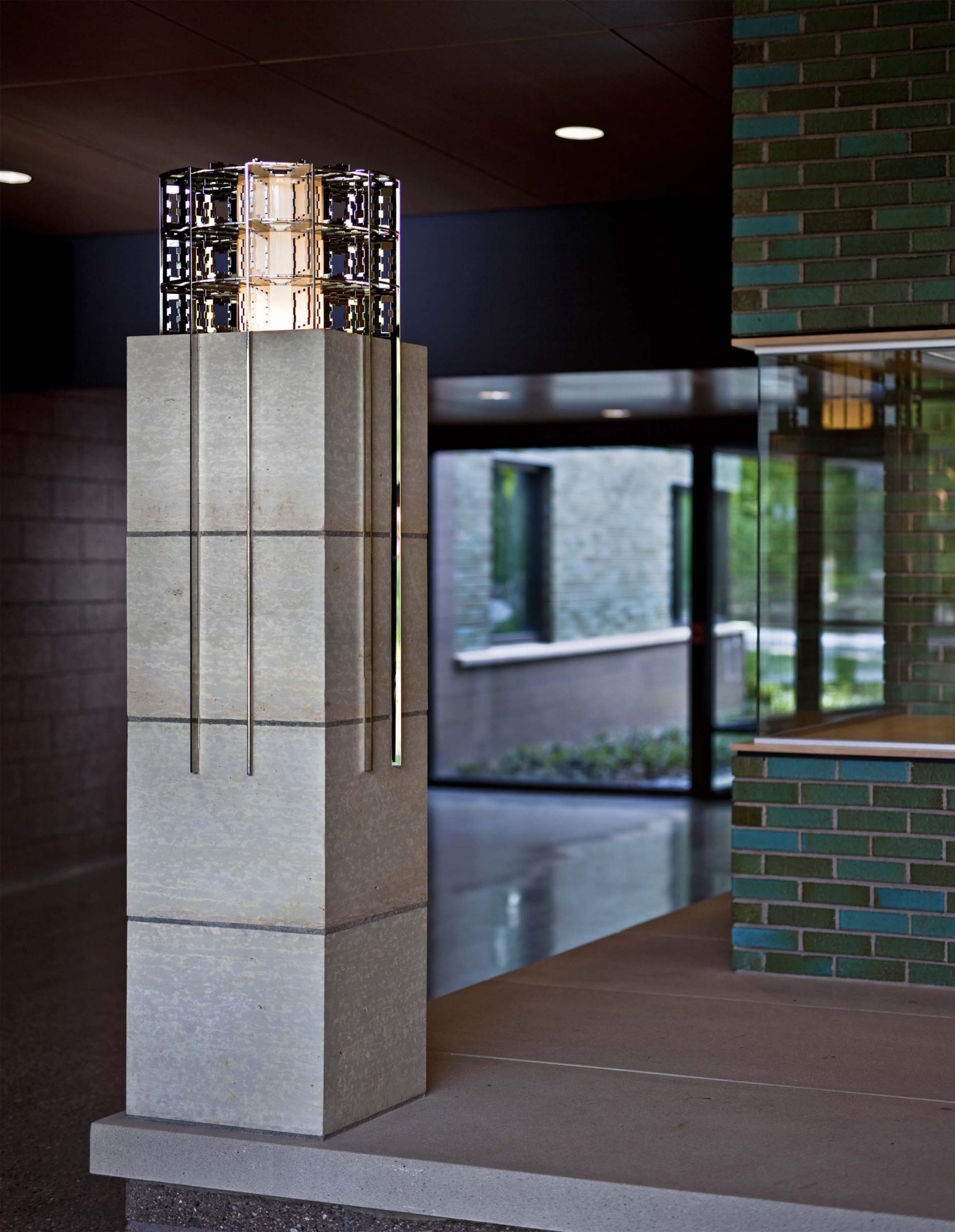 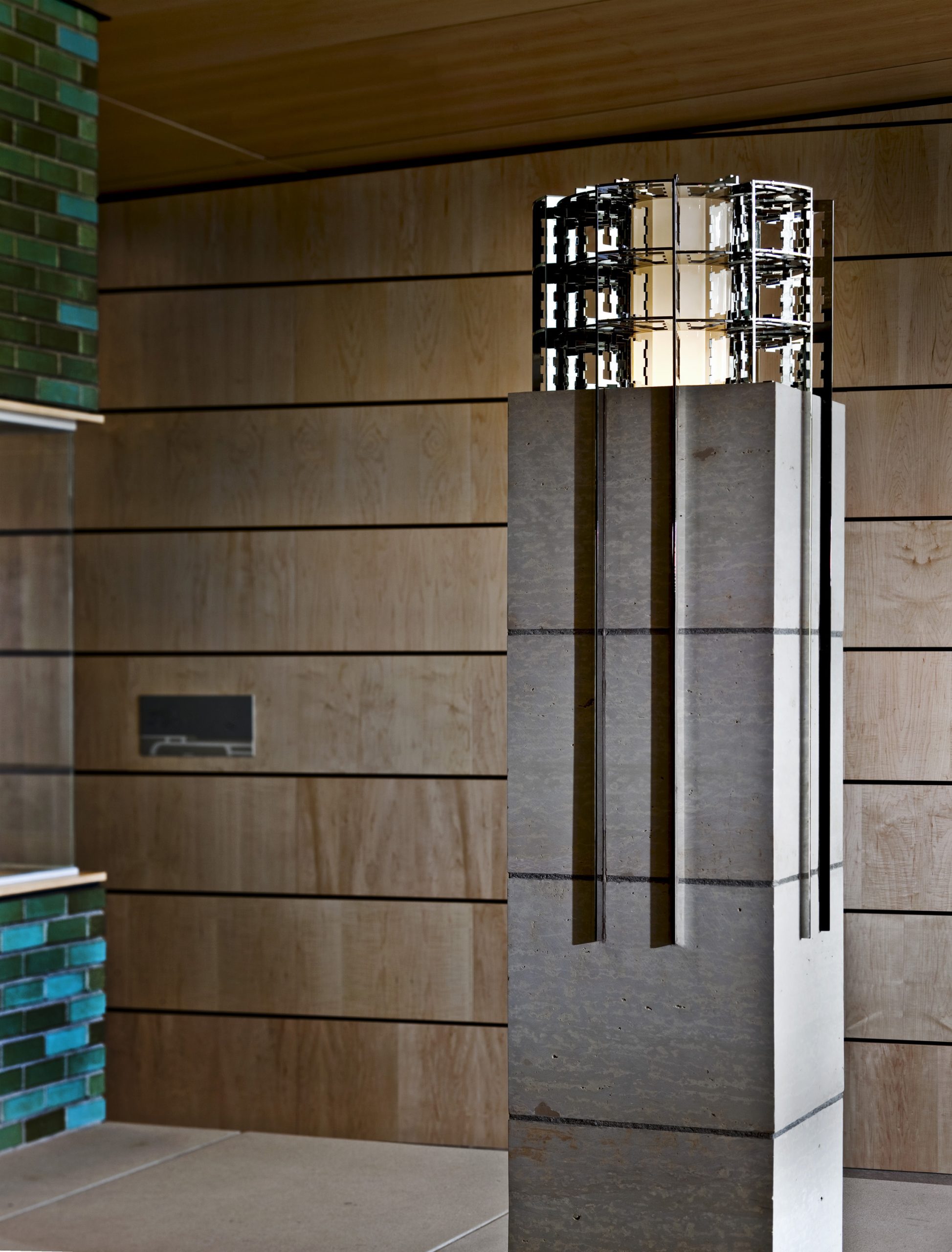 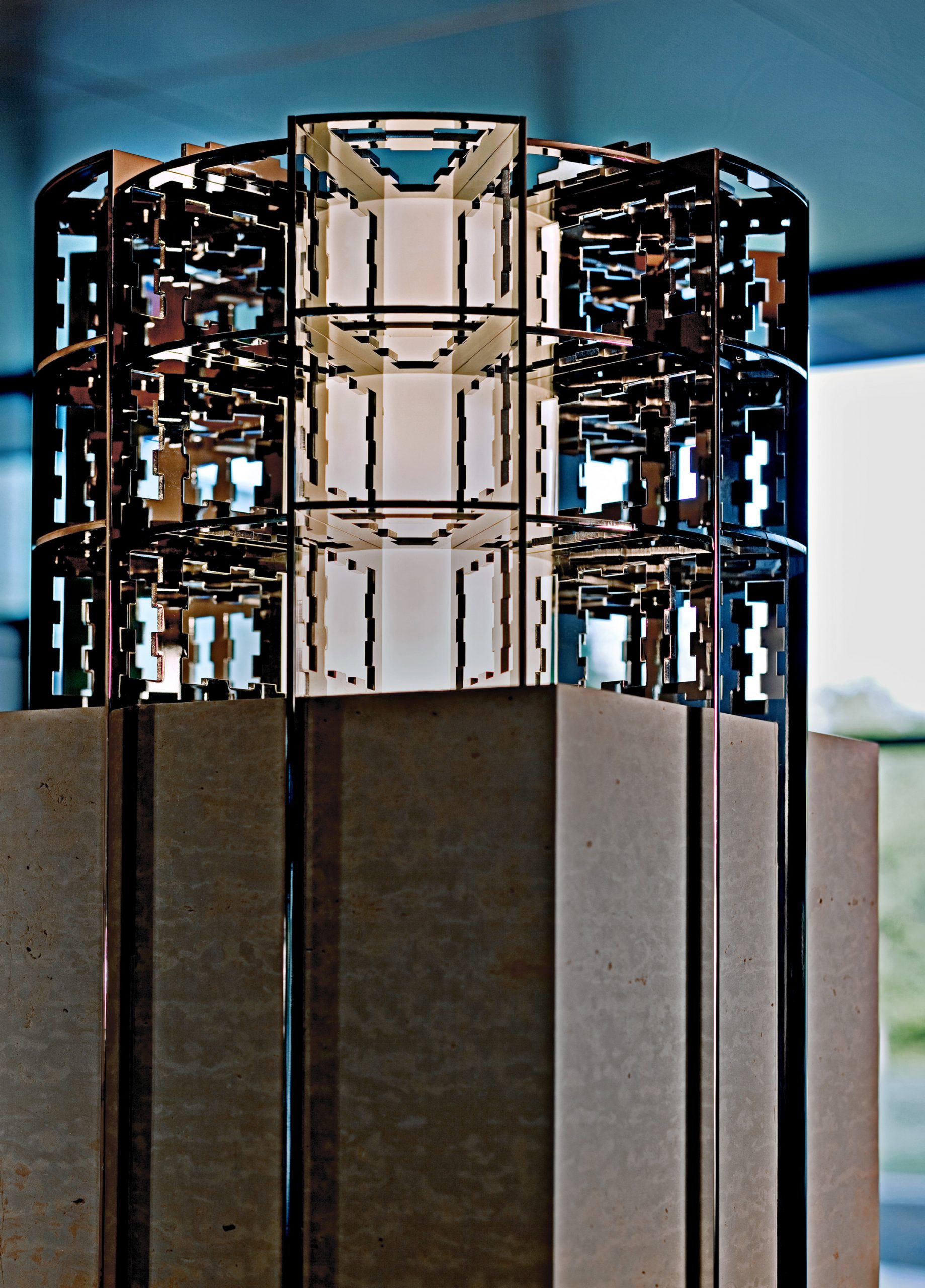 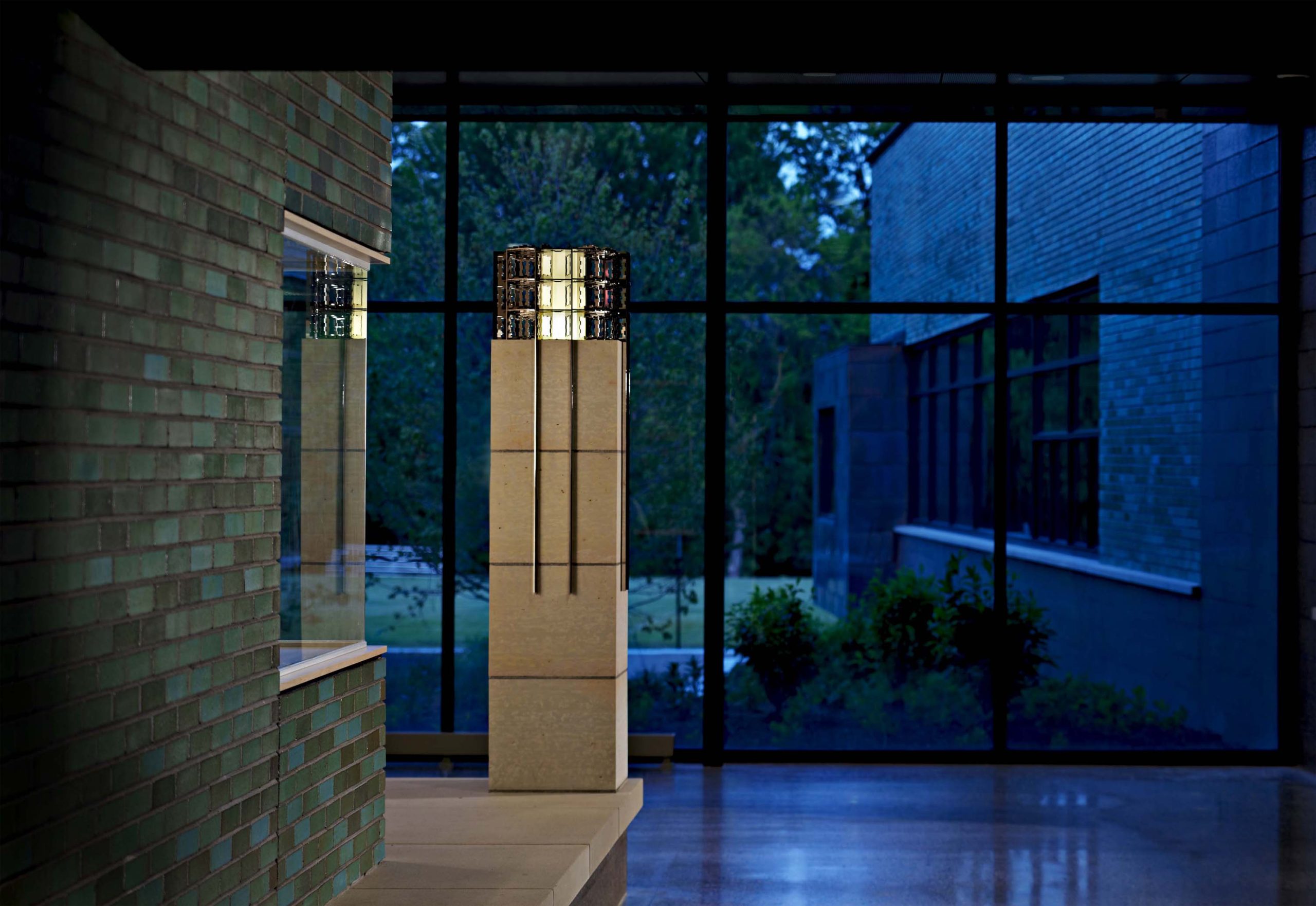 The project is a one-off light fixture located in the entry of the new Kingswood Girls Middle School designed by Lake Flato architects. Commissioned by The Cranbrook Schools, the light is seen as a bridge between the original Kingswood School building and the new, modern middle school.

Located in Bloomfield Hills, Michigan, Cranbrook has played a significant role in the development of design and craft in America, from its inception to present day. The original Kingswood Girls School, designed by Eliel Saarinen with his wife, Loja, and children Eero and Pipsan, is a concert of architecture, interiors, and designed objects. The new Kingswood Girls Middle School by Lake Flato is a modern structure. It connects itself to the original Kingswood building through its materiality and its figure/ground relationship with the landscape.

The commission of the entry torchiere represents Cranbrook’s respect for its past and its belief in the importance of site-specific designs, which have made the campus such a unique environment. The light was designed to relate to Kingswood’s past and celebrate the future. Using digital fabrication, the components of the luminaire are water-jet cut, nickel-plated, assembled like a puzzle, and illuminated by a LED source. The polished network of plates reflects and radiates light acting as both a solid and translucent form: a three-dimensional stained glass that creates a moment of time both ongoing and retrospective, an homage, and a new vision.

While Lake Flato was the commissioned design architect, I took most of my direction from the Cranbrook Schools project manager. There was also as input from the heads of sub-departments of the campus. As an alumnus of Cranbrook’s high school, the Head of Schools had seen my work previously and sensed a strong connection between my aesthetic and the aesthetic of the Cranbrook campus. During the development of the project, I presented a series of conceptual renderings, which were narrowed down to the basic shape, and form that is now installed. From there, we used the palate of new materials as a reference point and produced several mock ups to determine which metal finish would best serve the space. Once the final design and materials were selected, the reviewing committee along with the president of the campus agreed that the piece felt like it related to the entire campus. From this point, I was involved with the fabrication and installation of the work.

Given that I attended Cranbrook for high school, this is a very important and personal commission. After completing this project, I was asked to design a seating element and entry textile for the same space. The light fixture has come to been known as the icon of the new school. The campus continues to commission great architects, designers and artists to extend the vision started almost a century ago. All these new works, while maintaining an intensity, rigor and appreciation of materials that relates to the past, continue to express new forms, ideas, and spaces that are current.