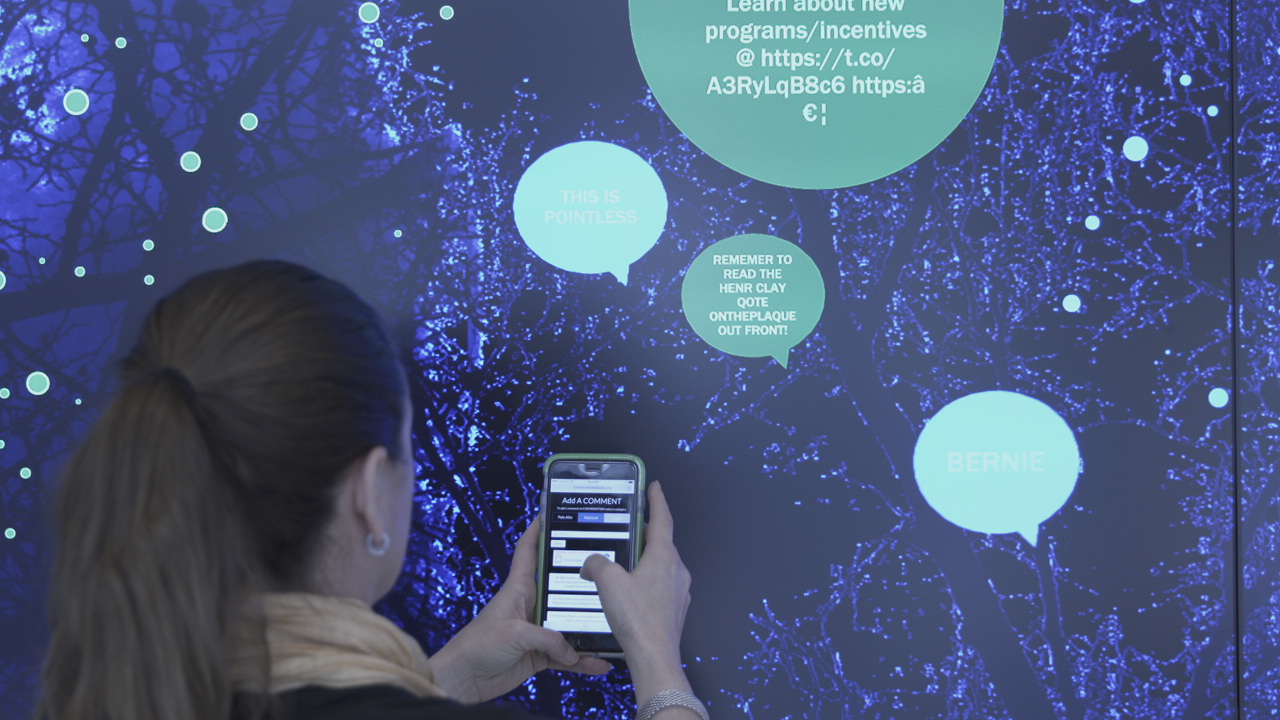 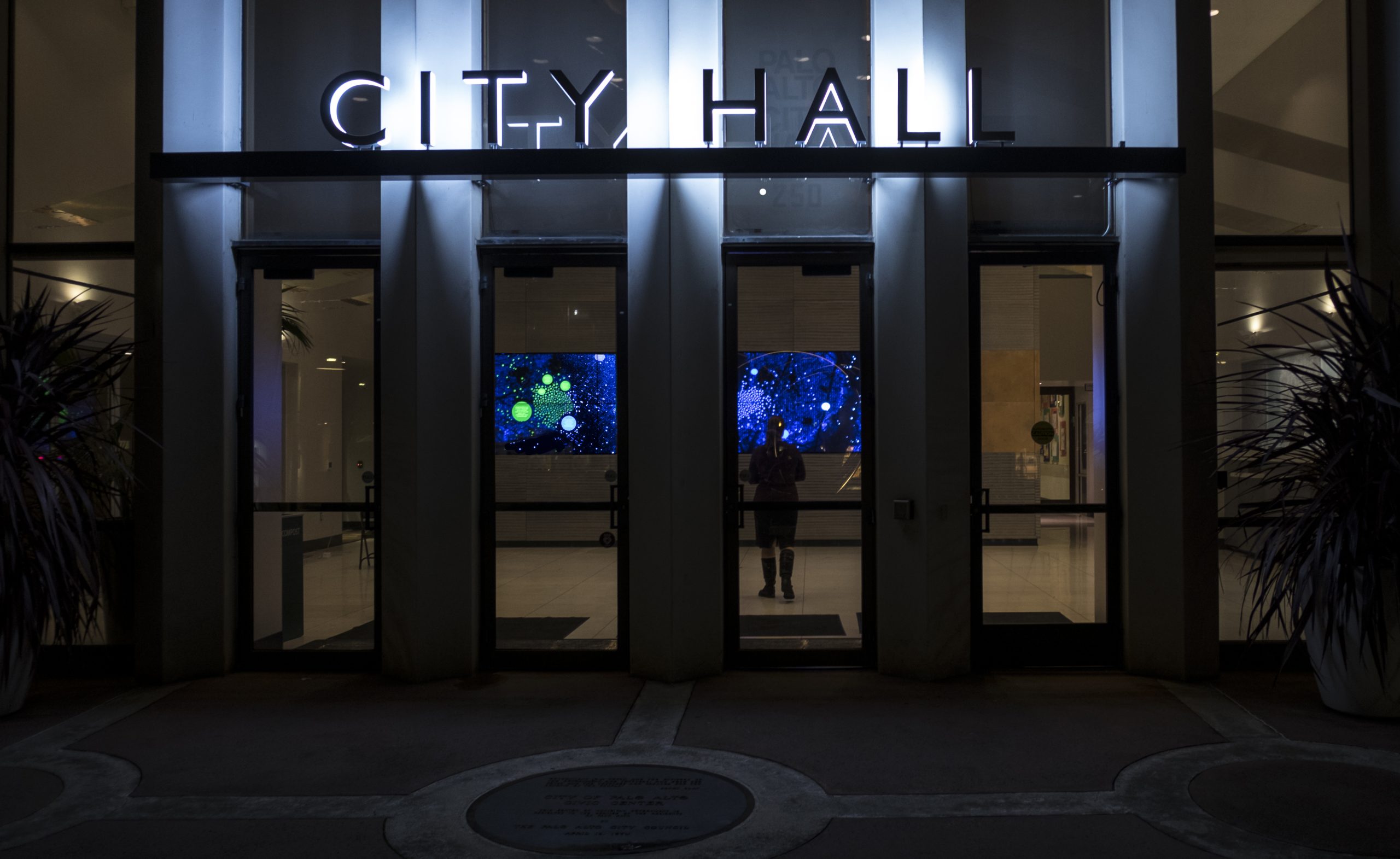 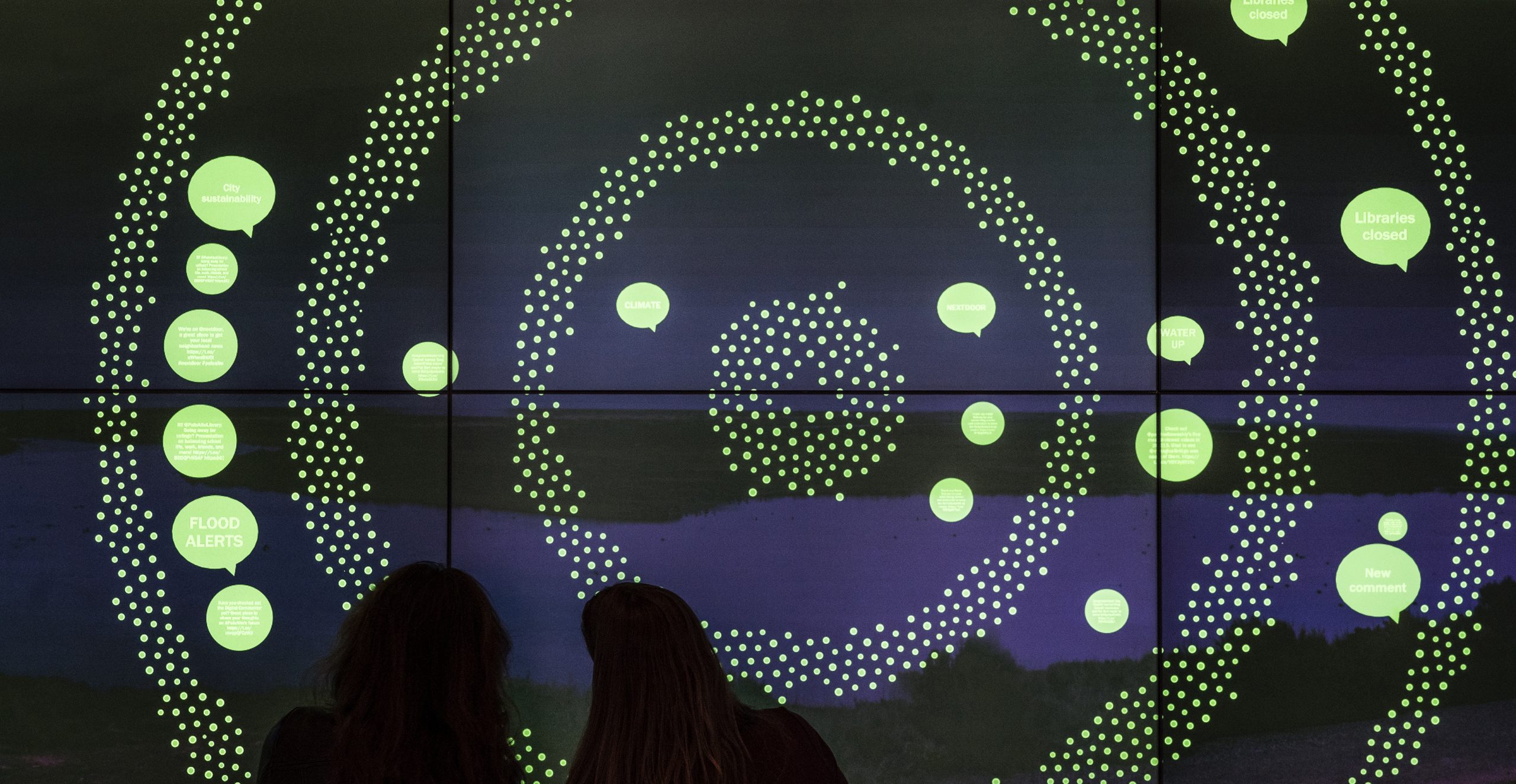 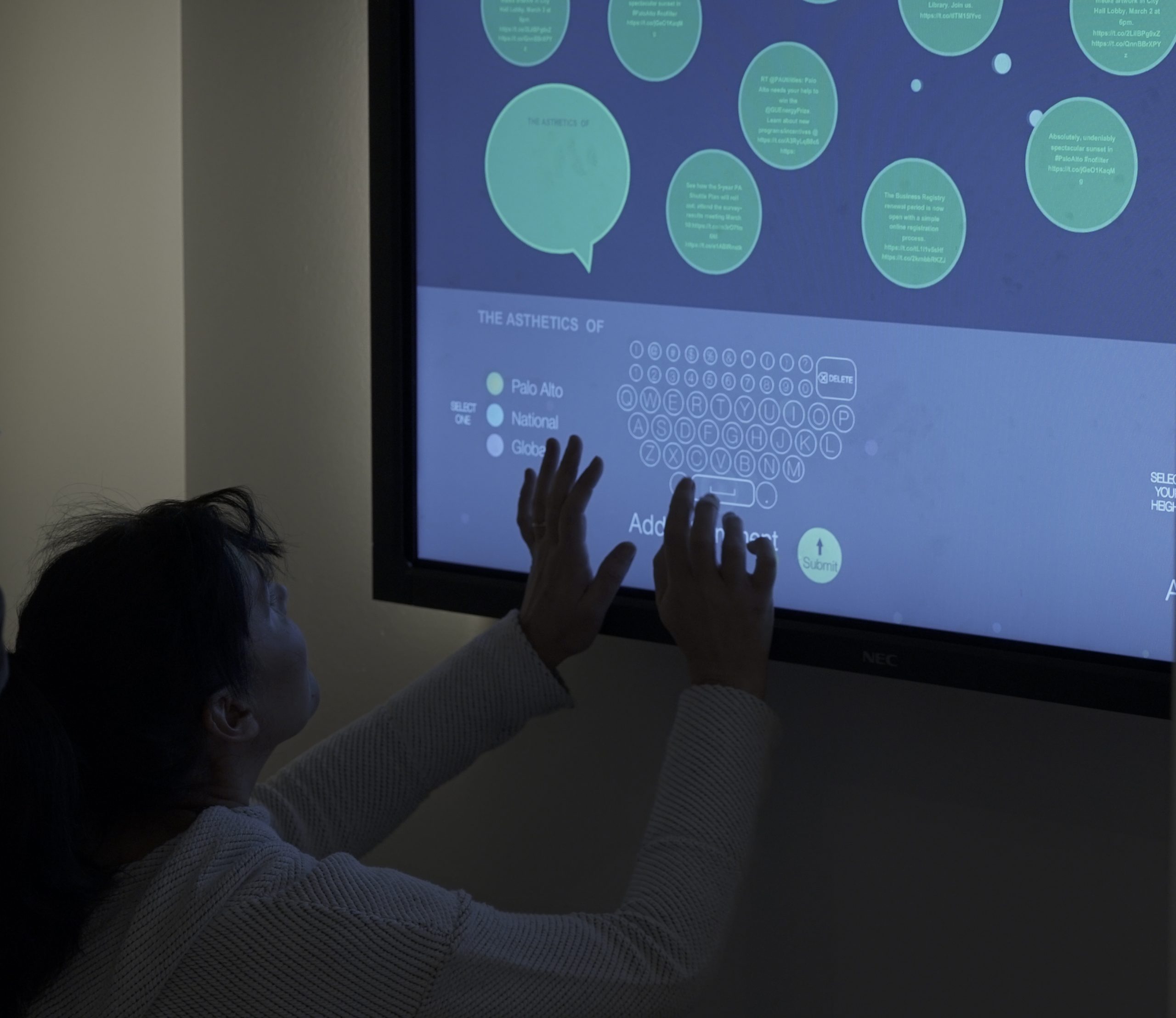 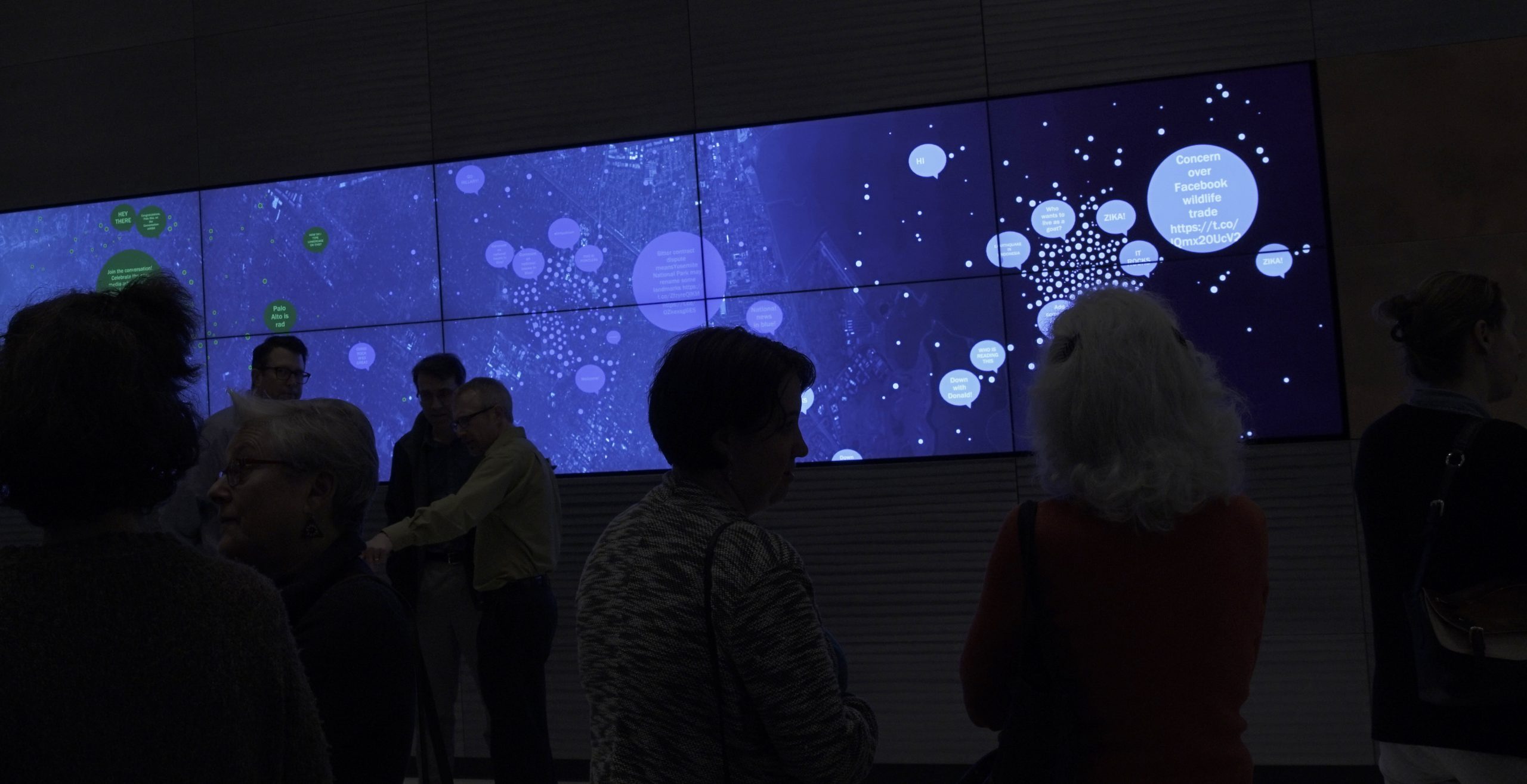 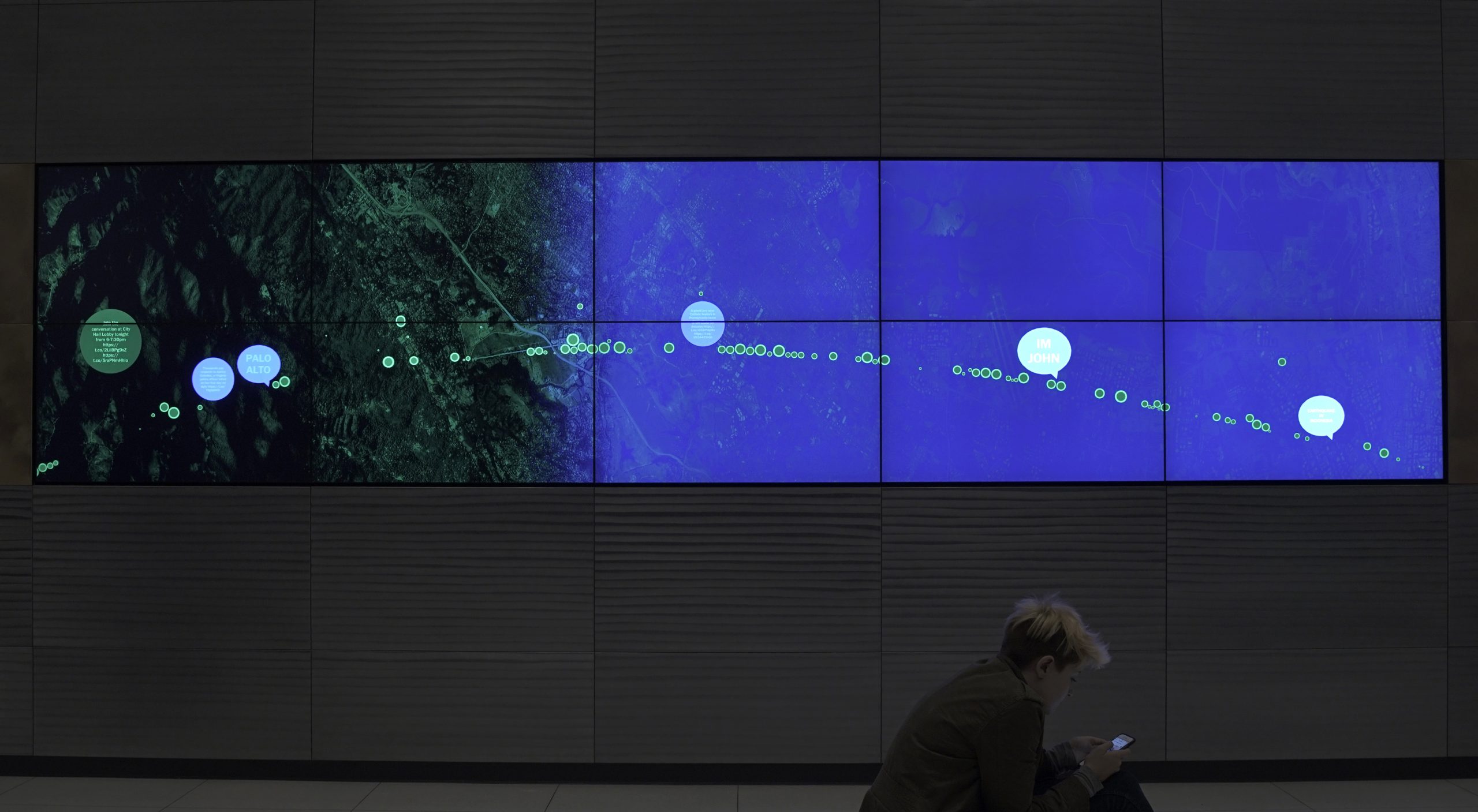 CONVERSATION is an interactive media artwork sited in the entry of Palo Alto City Hall. The lobby installation consists of an array of ten High Resolution screens adjacent to an alcove with camera and touchscreen. The piece is more a collaborative tool than a display. Local, National and Global feeds continually uploaded to the screens provide the catalyst for an ongoing community discussion unfolding in real time. From the touchscreen display within the lobby, one can post comments and upload images while at City Hall. An app for mobile devices allows participation from anywhere through the website: CONVERSATIONpaloalto.org

I was intrigued by the original request for proposals for this project. Palo Alto wanted artwork in the City Hall lobby that would represent and encourage an open, transparent and creative style of governance. These were the exact words and that was something I wanted to be involved with.

CONVERSATION became that artwork. It is an expression of the Palo Alto community and a window into a working democracy, playing out in real time. At its core, it relies on public participation. Without it, it doesn’t exist.

When I first began working, I imagined something that offered the spontaneity and integrity of a person raising a hand in a public meeting. I imagined a new representation of that meeting, with all issues up for public discussion, and then all that discussion, forming new, malleable shapes and patterns in real time.

I wanted the project to show that democracy is something we make together, and that it changes moment by moment. So I wanted the project to be topical, flexible, so that as issues draw public attention and comment, they will be reflected visually, with the volume, the substance and fervor of those comments, plainly visible for all to see.

It is one thing to talk about open government. It is another to put it into effect, because when people really get involved with their government in a public way, you never know what is going to happen. I have called Conversation an experiment. I think we all - meaning the people that worked on creating it and the city that encouraged it - knew that there was an element of risk in an artwork whose meaning relies on public collaboration. So we worked with city leadership to understand the risks and determine what the city was willing to take on. This collaboration is ongoing - because the artwork plays out over time. Ultimately we put faith in the public and so far it has worked.
Technically, this project has many parts that all needed to come together in realtime. We worked closely with our developer James Hurlbut on a graphic language that would be welcoming, even playful, to invite public participation. The user interface for touchscreen and mobile devices needed to be simple enough for use by anyone walking into City Hall. We collaborated with City IT and Communications staff to integrate the piece into the City platforms.

I imagine that over time there will be a rhythm to the wall. Maybe it tracks the news cycle, or issues closer to home. We we began, we didn’t anticipate that it would launch at the same time as our hotly debated electoral season. But no matter how this piece matures and grows over time, I hope that when people see it, or use it, they will think, “This is a place where people are aware of their surroundings. This is a place where we can be heard, a place where we do listen to what others have to say.”