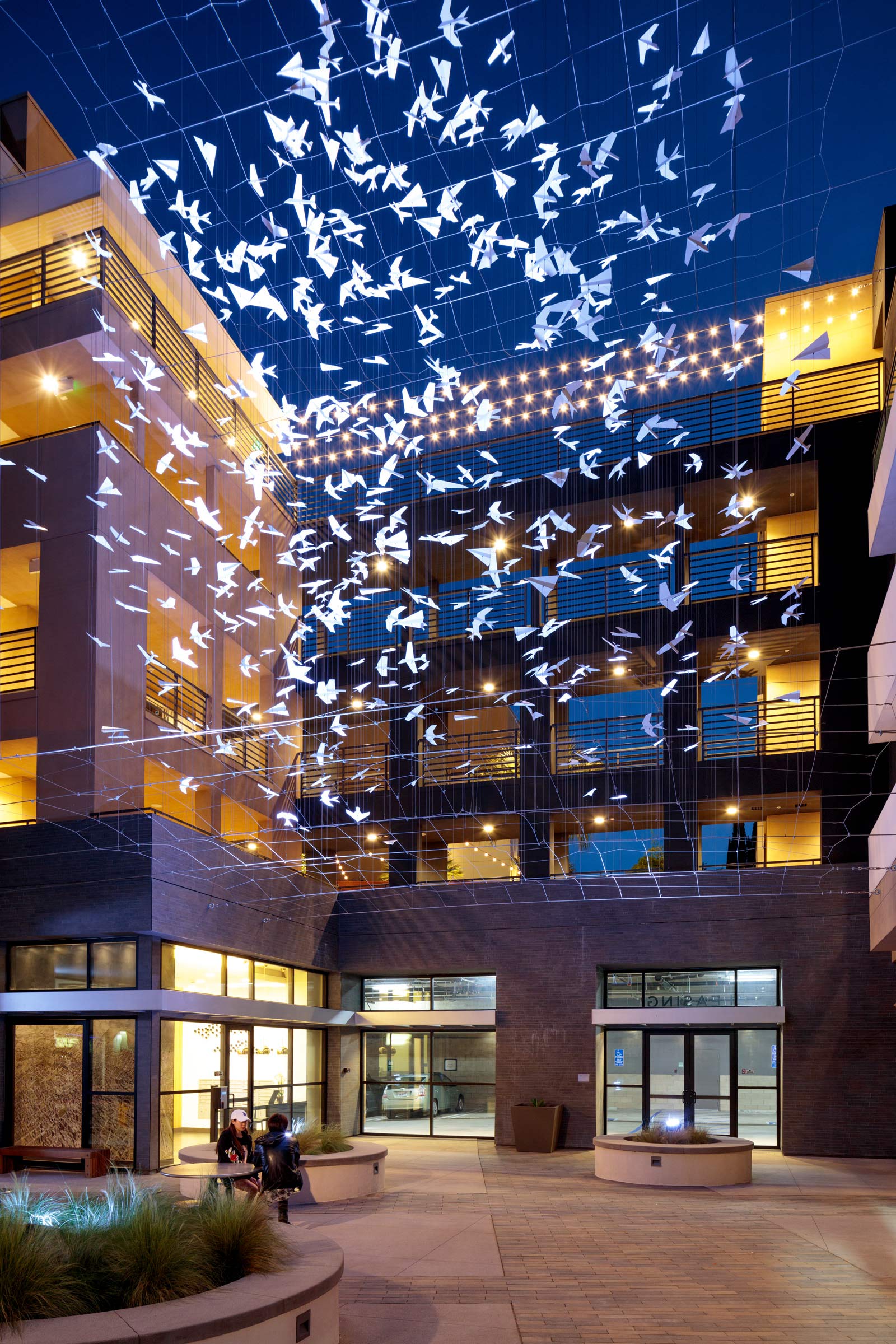 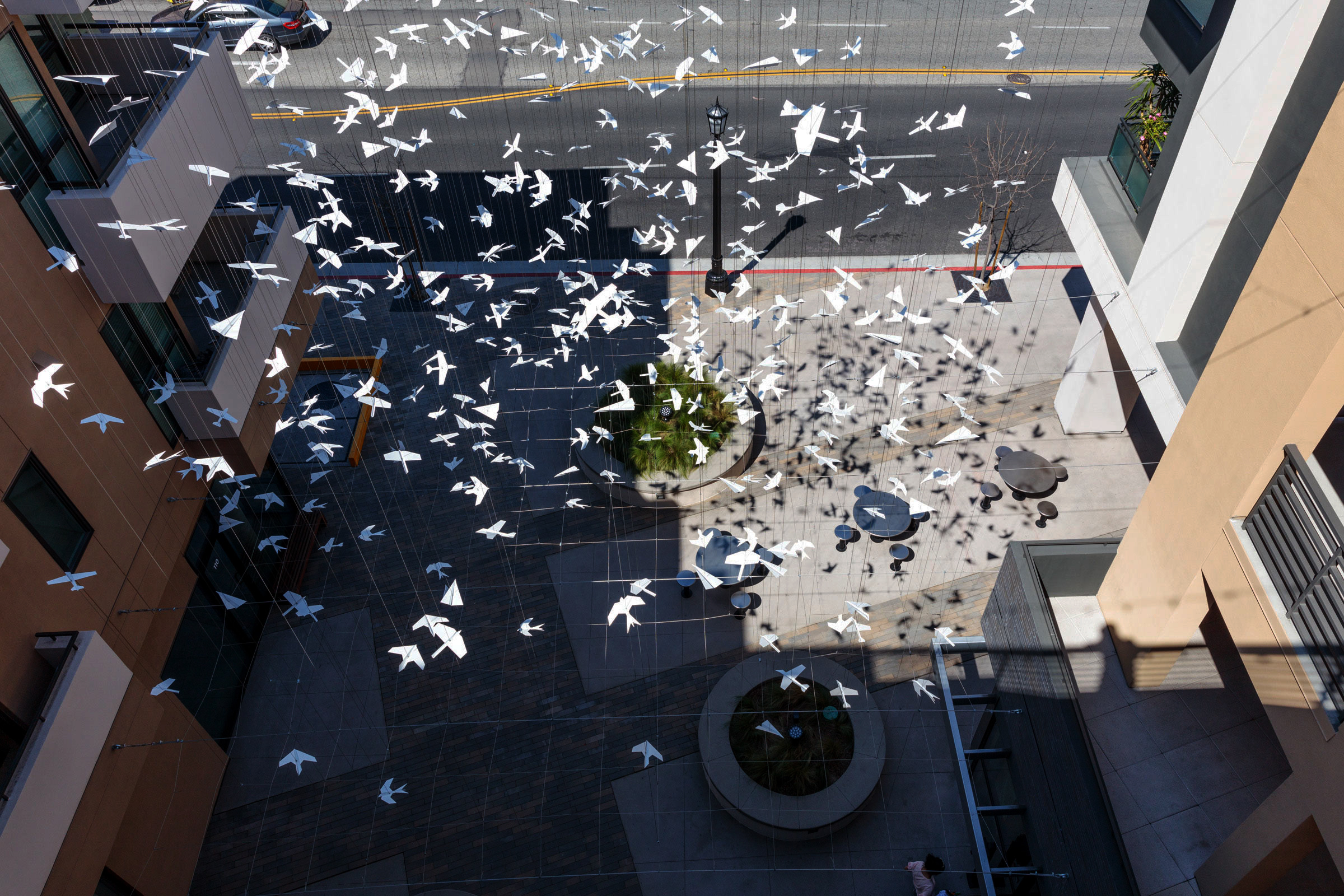 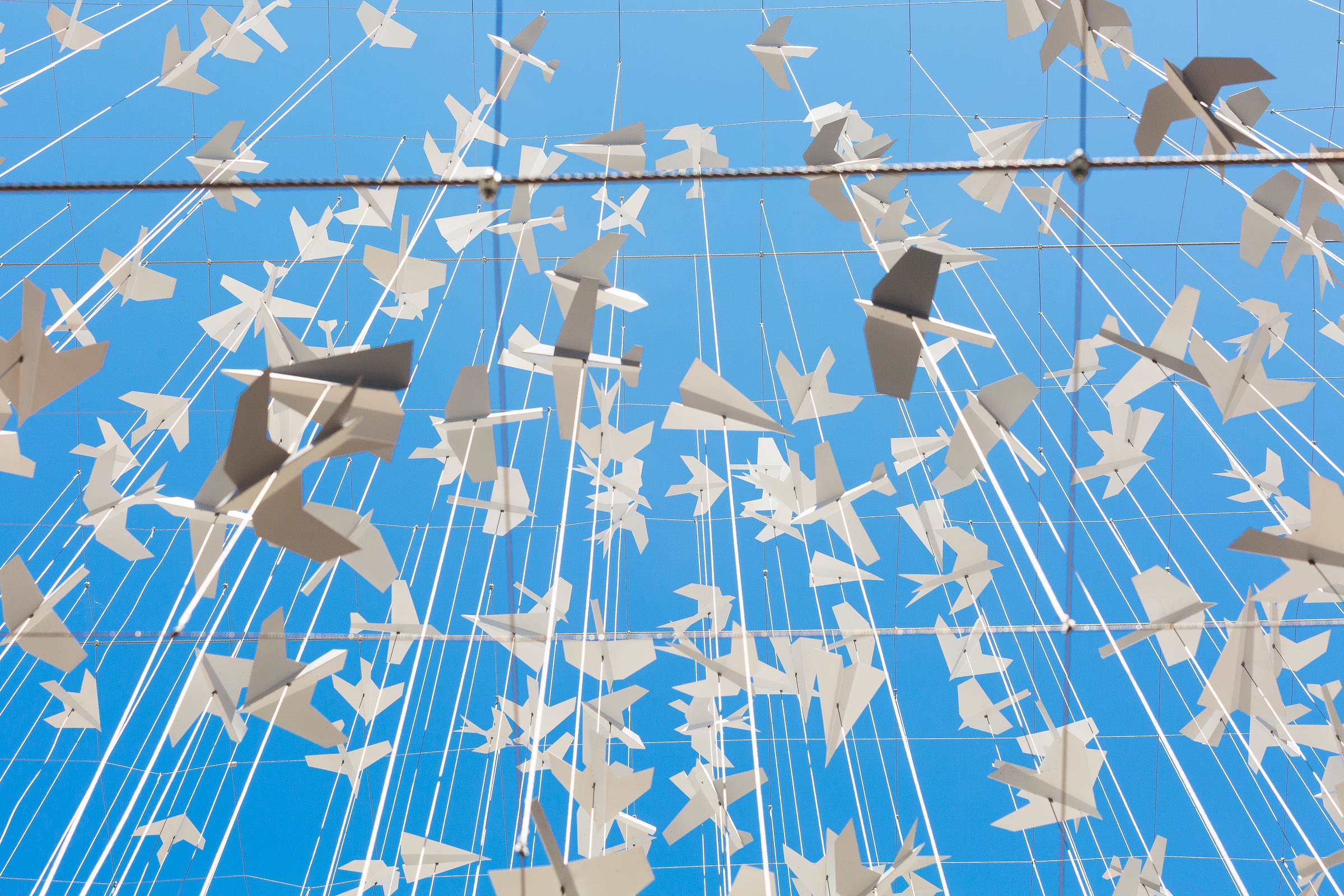 An entrance canopy for a mixed-use development in Pasadena, California composed of 400 folded “aerogami” shapes “flocking” together in the interconnected five-story space above the main entrance plaza. Exploring the different types of social connectivity between residents and passersby both at ground level and vertically, the individual forms imply multiple local references while their paths imply any number of real or imagined narratives and mimic the fluidity and rhythms of conversation.

Creating identity and acting as a visual focal point the artwork is suspended above a plaza which is a key component of the project with access to both the lobby and the leasing office. This public space also serves the commercial tenants and the general public. The artwork aims to support the use and design of this space with a daytime and evening presence and is visible to pedestrians and drivers alike. The artwork can be experienced from unique vantage points located both at ground level and from the floors above. In addition, sunlight movement across the plaza produces shade and shadow patterns that are constantly in flux due to the naturally changing environment.

The "aerogami" forms suggest a range of shapes from a classic child's toy plane, flying animal forms found in origami and more scientific paper designs used in studies on aerodynamics. Their references include the famous wild parrots of Pasadena, the science and engineering traditions of Caltech, and the influence of Asian culture and art found in the history of the once thriving Japantown. "Flocking" together they form a sculptural tree-like shape that mimics the historic ficuses traditionally seen on the city's streets.

The artist worked closely with the design team to integrate the project both physically and programmatically into the space. Structural attachments were included in the building framing to accommodate later installation of the 40’ x 40’ x 40’ stainless steel cable support array. Lighting was conceived as part of the overall landscape scheme and calculated to both highlight the artwork and to provide proper levels of general illumination.

Note: The practice and study of origami - the traditional Japanese art of paper folding from the 17th century that evolved into a modern art form- encapsulates several subjects of mathematical interest. It can be used to construct various geometrical designs not possible with compass and straightedge constructions. There are plans for an origami airplane to be launched from space. A prototype passed a durability test in a wind tunnel on March 2008, and Japan's space agency adopted it for feasibility studies.