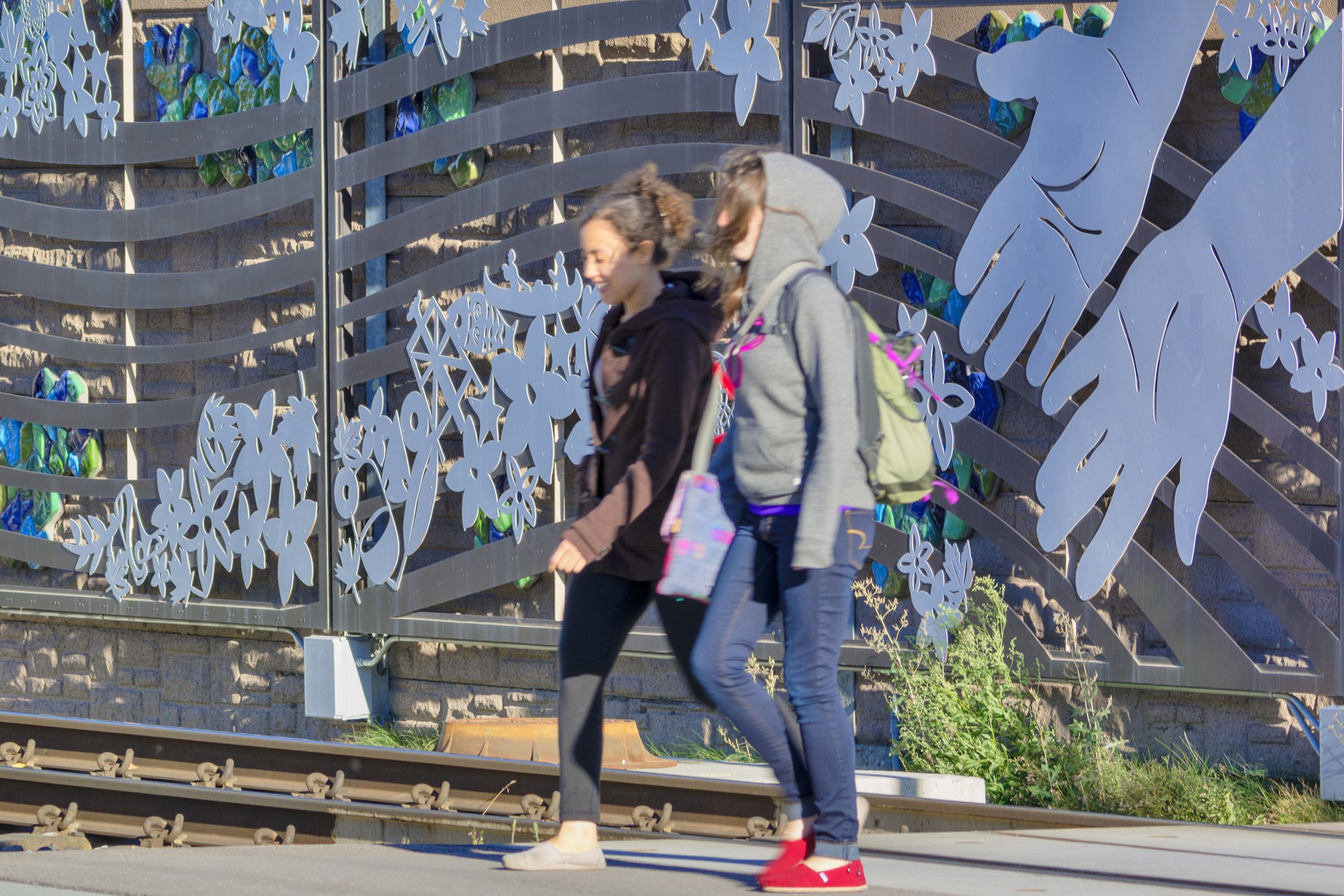 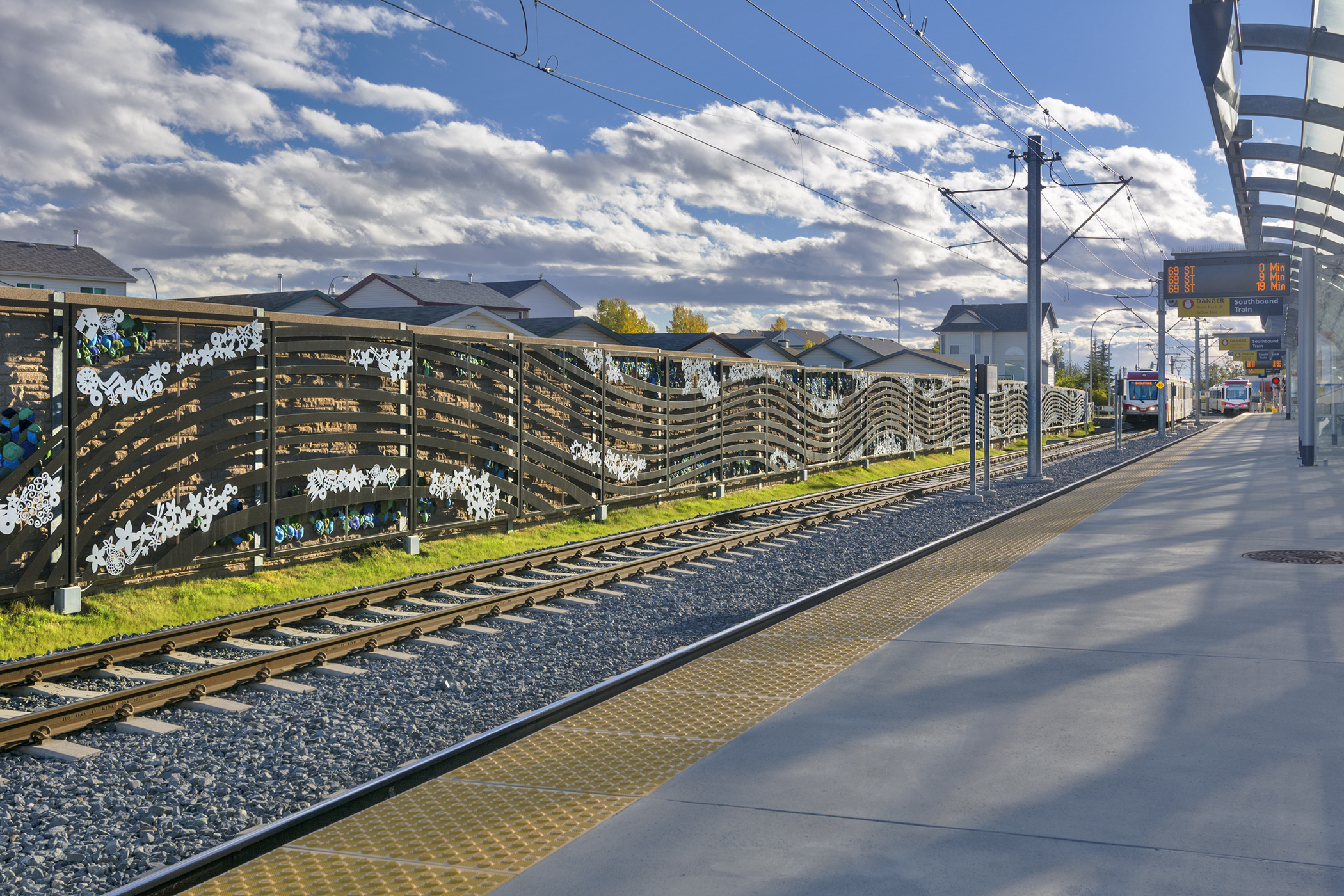 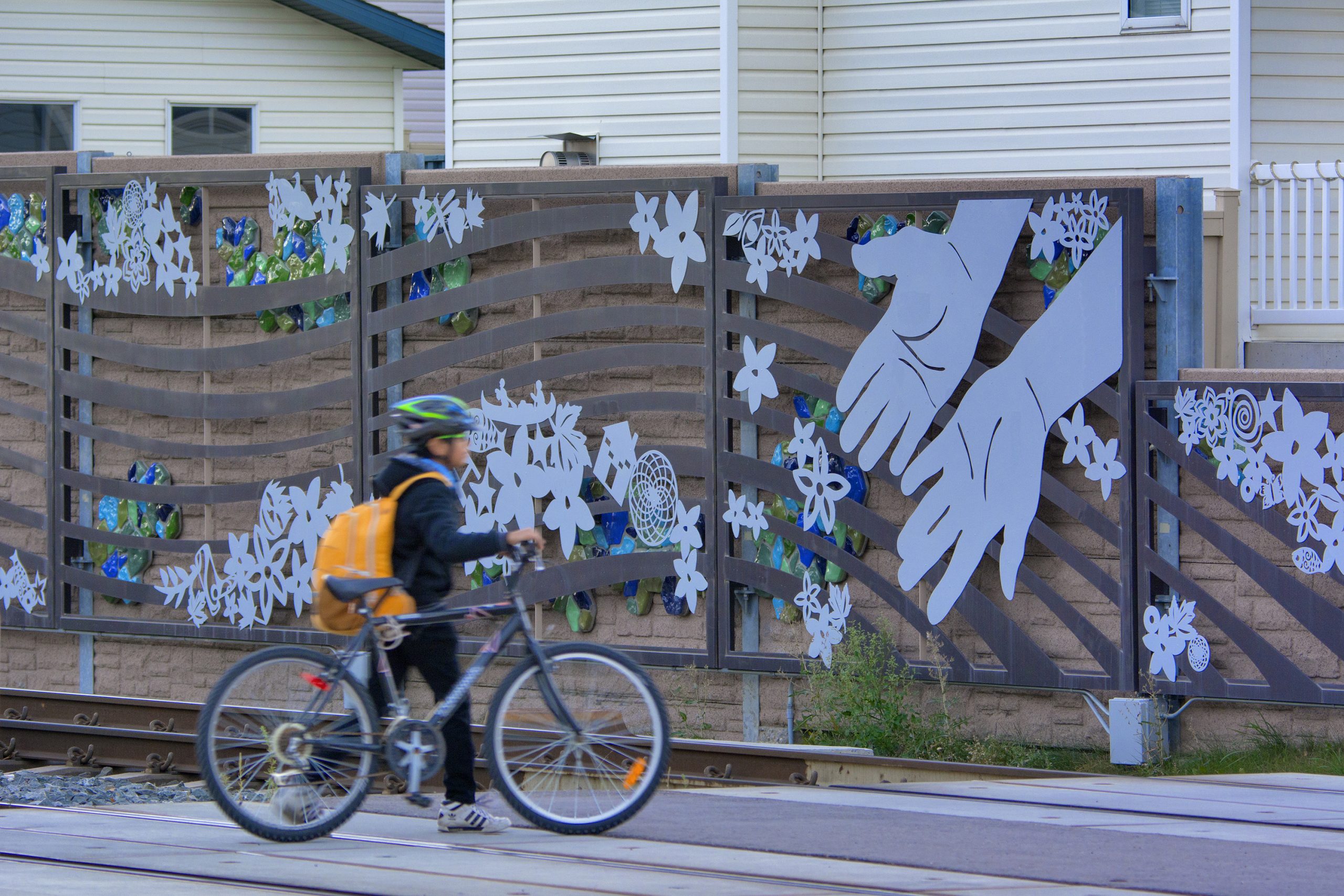 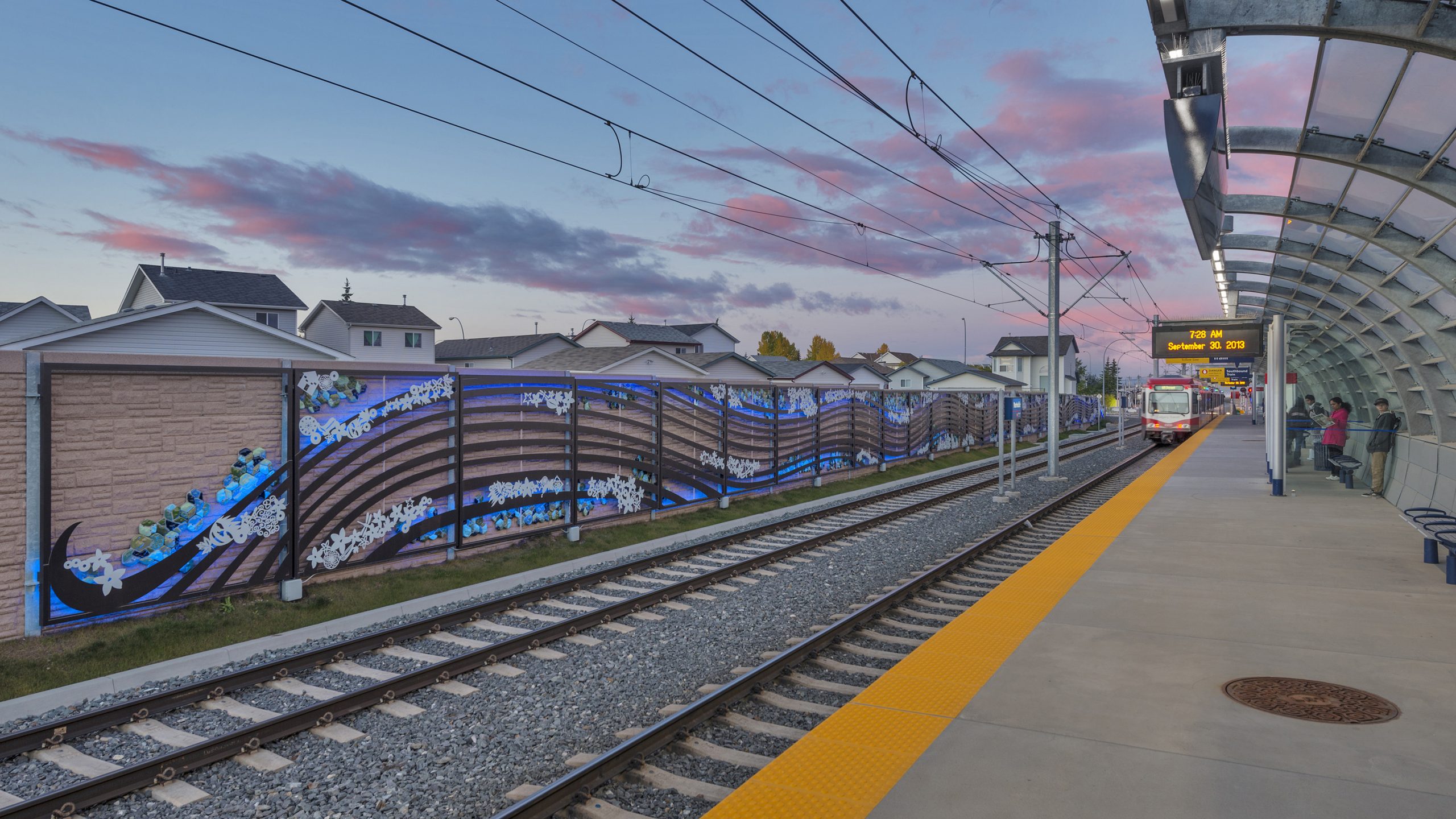 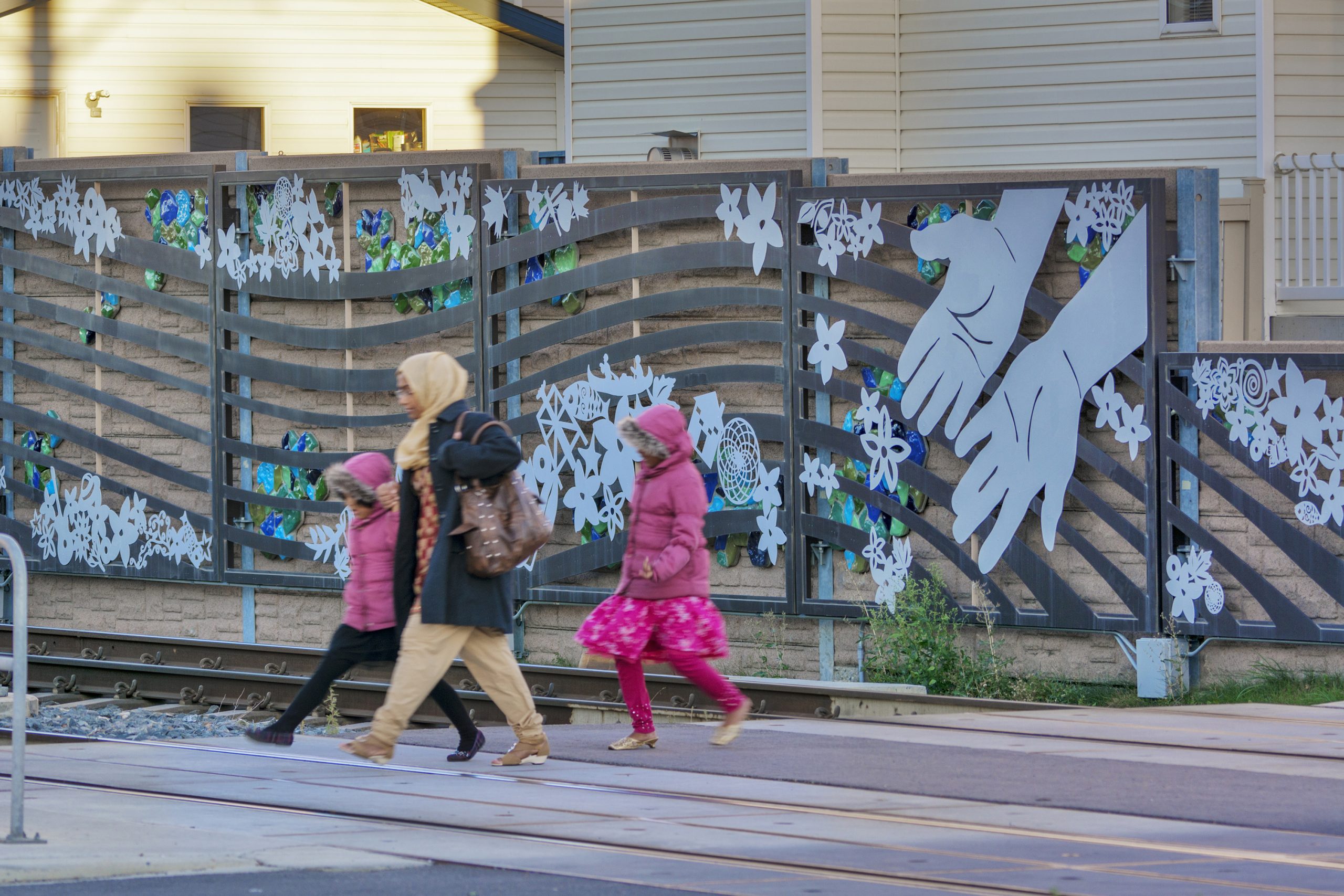 Entitled “Confluence,” this site-specific Art-in-Transit installation weaves together the physical and symbolic connections between the rivers of Calgary and the Ganges. The new LRT station cuts through the rapidly growing community of Martindale. In context with the adjacent school, the integrated public artwork speaks to the surrounding community, with over eighty percent of Punjabi cultural heritage.

Over 400 linear feet of steel “river” panels, combined with terra cotta mosaic, pattern-cut “artifact” and LED lighting extend along the inbound/ outbound sound barrier walls opposite the platforms, creating an experience that welcomes residents and appears to move in concert with the train.

The most important goal of the project was to create a meaningful integrated installation that involved the community in the process. Rather than a separate, stand-alone object placed somewhere on the platform, through a monumental physical integration, the artwork has become synonymous with taking the train. Not hanging on the wall, instead, it has become the wall. Transportation infrastructure is often a series of hard, static, linear arrangement of heavy parts. Through artistic integration, nuances are discovered and extended over a longer experience, including softening the structural elements and adding lighting, color and depth to the site.
The integration of the artwork, including the public-input cultural development initiative, has been cited as a key factor in mitigating what once was a negative community reaction due to the disruption of the light rail construction project. Families now stop to visit the station in order to find shapes and symbols that they influenced. Something from every person that participated is incorporated into the project in some form. This is at the heart of design integration. Integration on this scale is also the way that a larger community dialogue is developed, with people becoming the best way to share the story.

The installation is handmade of components fabricated in the US and shipped to Canada for installation at the site. The success of the project depended upon incredible coordination and collaboration, which began at the very beginning of the project. The artist developed a process for public-input and cultural engagement that included hands-on workshops in the public school and local community center. Collaborating with the pubic had significant impact on the conceptual direction of the project, which required dialogue between every design discipline to address details in fabrication and installation. Every material and technique was tested and vetted through the collaborative process, inevitably changing and revising design to realize the final installation.
The collaborative process also involved every artist and subcontractor throughout the project, whether in clay, metal or lighting. This included the development of new systems for production, glazing, CAD cutting files, packaging, shipping/delivery, customs, off-loading, hanging and method of attachment, engineering, and inspection. Each part of the process was connected, requiring true collaboration, not only in early design development, but also in the visual communication of the project.

The most important element to Punjabi culture and central to their religious belief is the sacred Ganges River. Regardless of where or who you are, they believe you are connected to the waters of the Ganges. People bathe in it, drink, wash, and offer flowers and other artifacts in ritual ceremonies of birth and death. Calgary is called the Land Between Two Rivers, the Bow and the Elbow. These rivers frame the history of Calgary, including First Nations inhabitants, creating the most significant cross-cultural connection, complete with metaphors of time, flow, current, nature, past, present, and future.