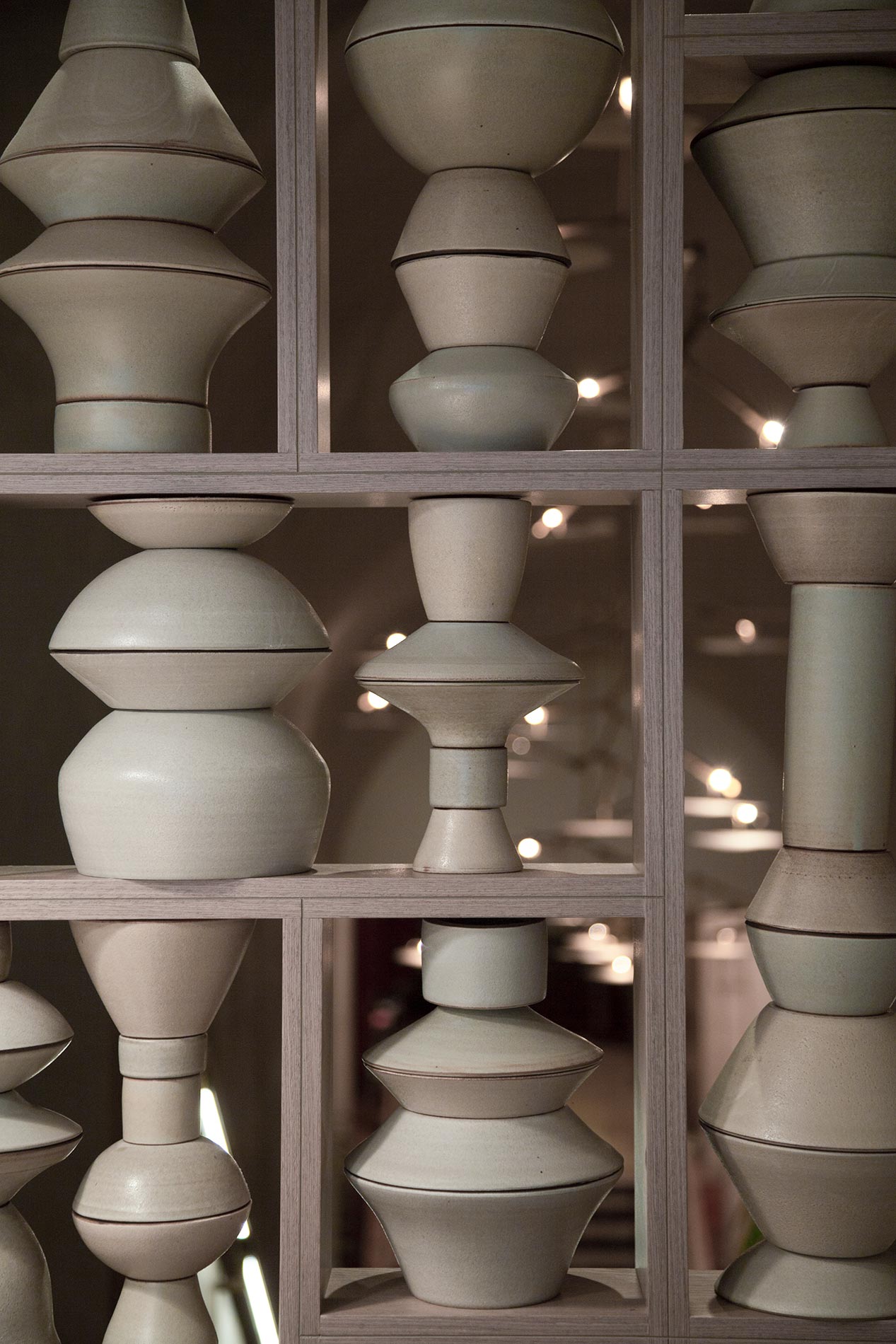 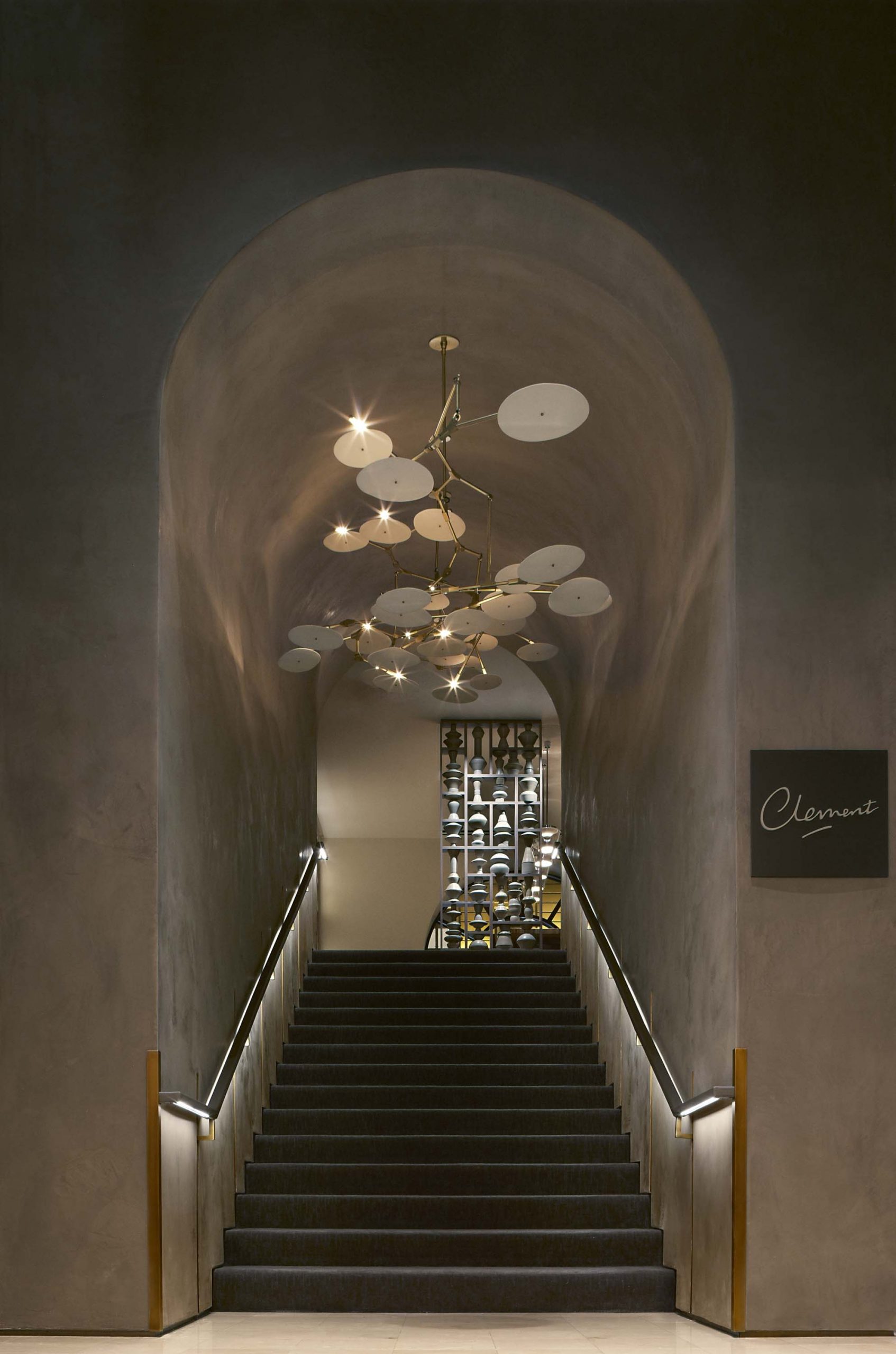 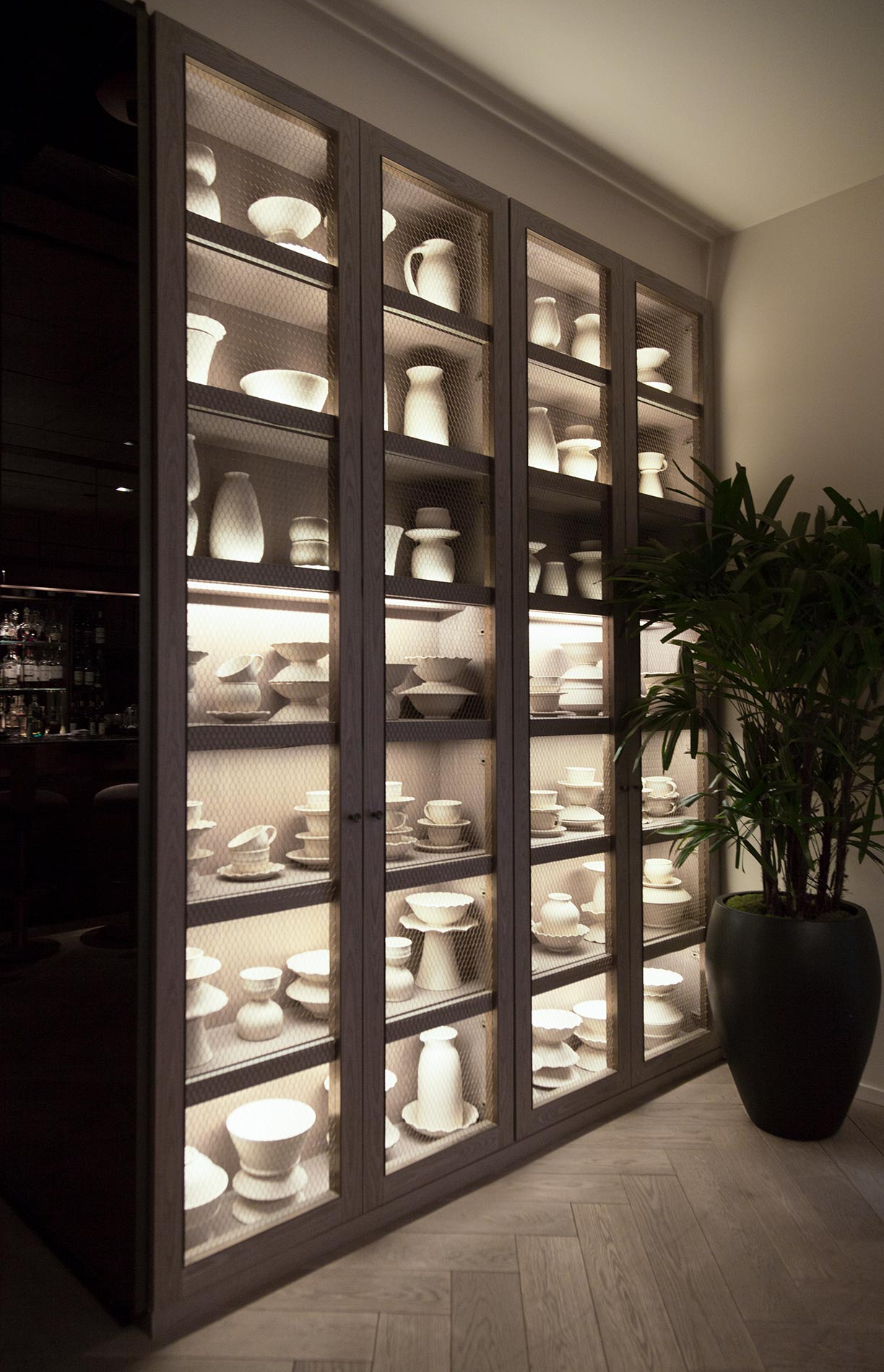 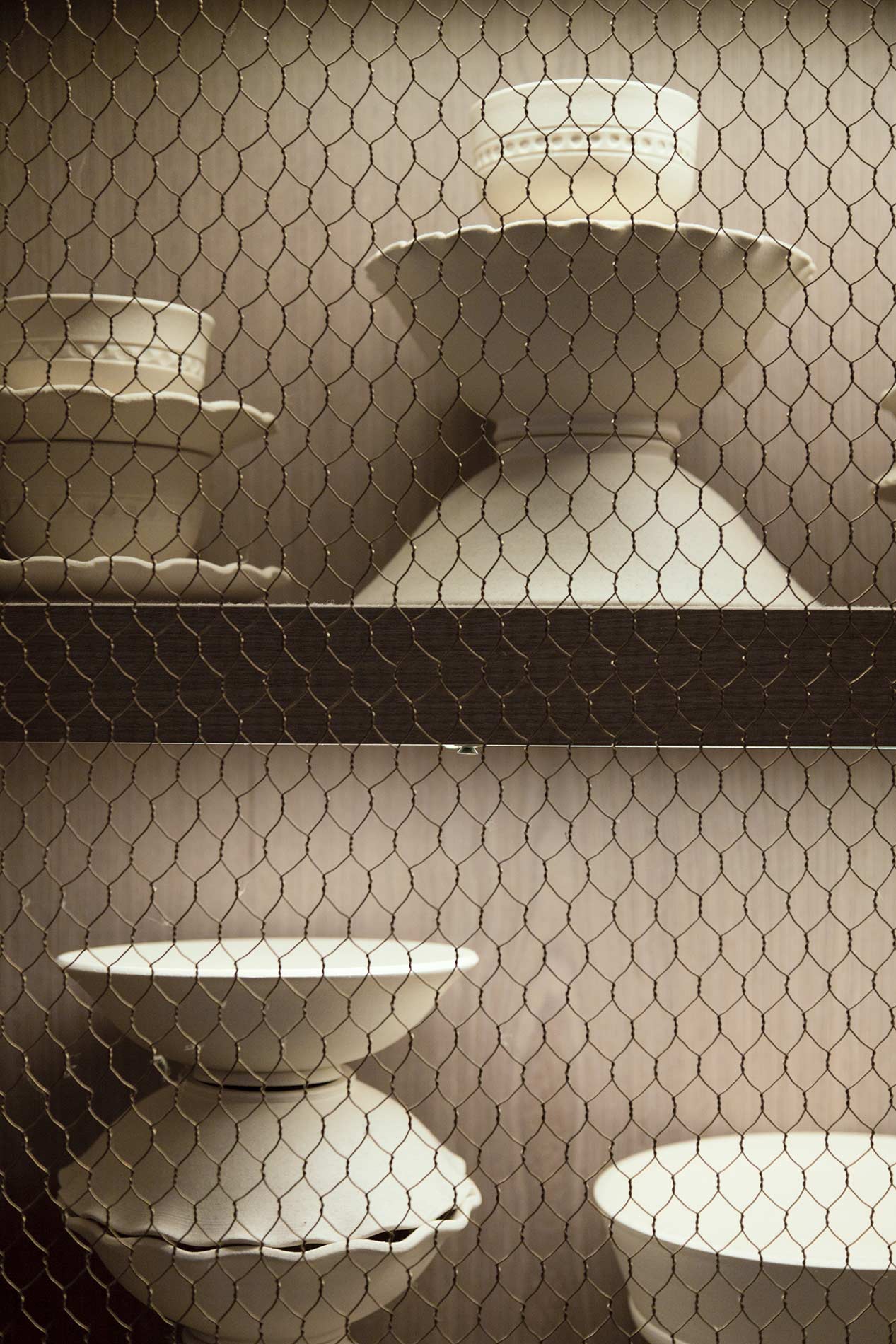 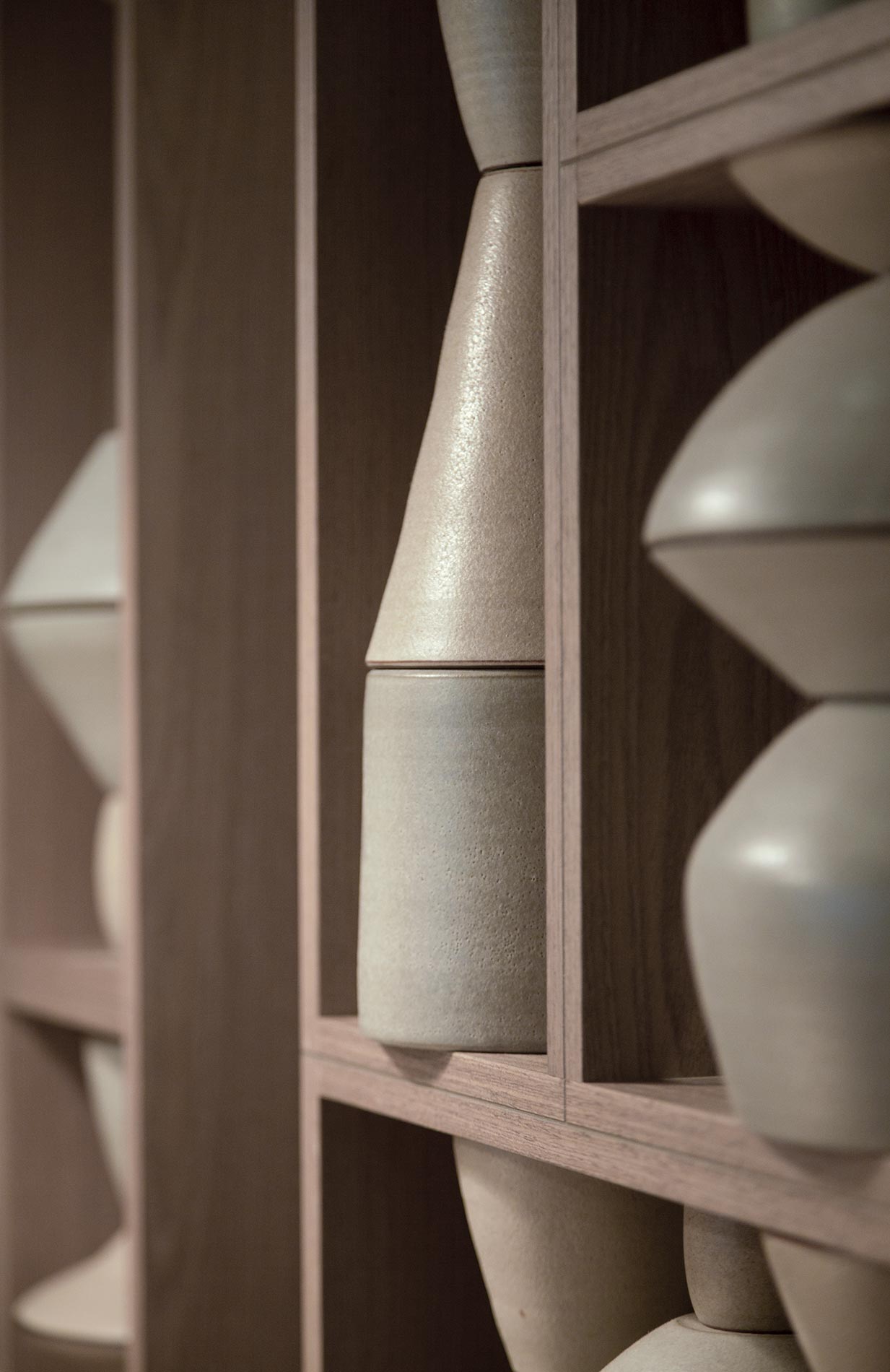 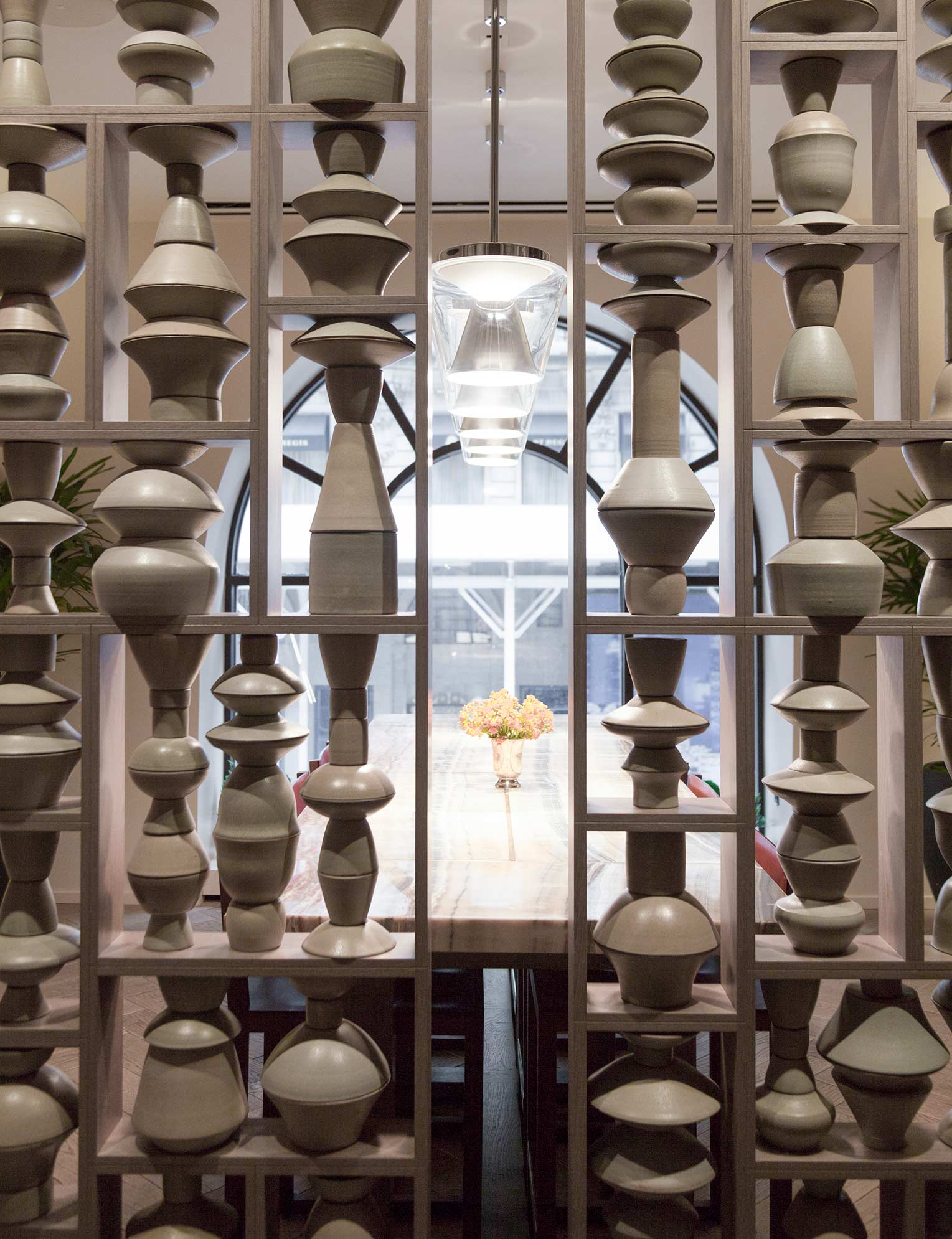 Commissioned by the Peninsula Hotel, in partnership with Yabu Pushelberg, the front screen – Anthology I – is a pair of side-to-side floor to ceiling claustras which contain vertically stacked wheel-thrown stoneware elements in varying tones of semi matte grey glazes. The artworks create a totemic aesthetic, which greet visitors to the hotel’s Clement restaurant on arrival.
Anthology II is a pair of cabinets that forms the perimeter walls of the space and features unglazed tableware in white stoneware, and arranged horizontally on shelves. Their designs evoke images of traditional English pottery, while their finish is white bisque.

The design brief was to create sculptural elements that would act as dividers and enclose the private dining room, all the while creating a sense of openness, elegance and warmth when walking up the staircase to the main entrance. Pascale Girardin’s signature palette of soft, earthy tones of grey and blues were selected to grace the surfaces of the wheel-thrown ceramics and were the perfect hues to bring forth the plush, yet relaxed atmosphere of the venue.

Girardin took inspiration for the work from the ceramics in her own atelier. Wishing to capture the farm-to-table philosophy of the Clement cuisine, she photographed stacked dishware, vases and plates from her studio shelves and sent the images to Yabu Pushelberg. “The compositions that emerged from the accumulation of these eclectic stoneware elements, intrigued me and when I sent the pictures to the design team, we were amazed to see that we had both referenced late American sculptor and New York resident, Louise Nevelson. The title of this piece could be seen as a ‘loose homage’ to Nevelson, believes Girardin but in reality it is more about the act of collecting and finding new meaning through grouping and displaying an assortment of vessels. “Each piece, with its distinct volume and profile, echoes affinity within diversity and offers an artist almost limitless permutations. However, the essence of the work comes in finding rhythms and balancing proportion; in orchestrating both the assemblage and the negative space surrounding it in order to create the whole sculpture,” she says.

“Yabu Pushelberg and I both tend towards the subdued hues, even monochromatic: we are all about shape, proportion, light and shadow, and as such our instincts are often the same when we conceive our aesthetic, which makes for inspirational collaborations,” says Girardin. “Here at the Peninsula both Yabu Pushelberg’s designs and the hotel itself exude a timeless appeal that transcends trend to create a permanence and a sophistication that I have aspired to in Anthology I & II.”