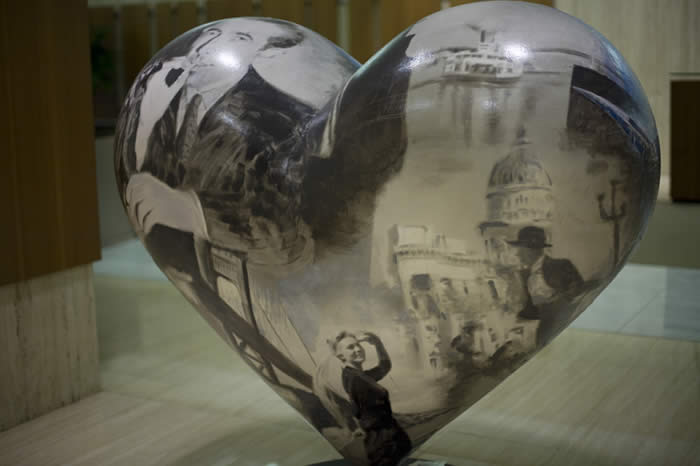 5' x 5'9″ x 3'3″, 400 lbs.
Pigment ink, acrylic gel medium, acrylic paint, metal leaf, Giants World Series ticket and spar varnish on canvas over a fibre glass structure with steel support and base.
This Large Heart was commissioned by the San Francisco General Hospital Foundation and purchased by VISA. Was located at the Geary/Powell corner of Union Square, San Francisco, from February 10 – September 14th, 2011. The Union Square management estimated that approximately 9 million visitors saw this Heart while it was on the Square. Now located in lobby of VISA headquarters at 595 Market Street, San Francisco.

Goal was to create an iconic artwork in the shape of a large heart that epitomized the heart and soul of San Francisco. I chose to create a colorful collage of contemporary scenes of the city on one side, highlighting the Golden Gate Bridge, and black and white scenes from film noir movies that featured San Francisco, such as Cops (1922), San Francisco (1936), Sisters (1938), The Maltese Falcon (1941), Dark Passage (1947), DOA Original (1950) and Vertigo (1958), on the other side.

The San Francisco General Hospital provided the physical fibre glass heart with steel support and base. I had submitted a proposed design which was approved and which I then translated into reality on the Heart. I spent two months painting the Heart in my studio, working with multiple media, ranging from digital paint printed on canvas that was then stretched over and gelled onto the Heart, plus chin colle, metal leaf, acrylic paint, varnishes, etc.