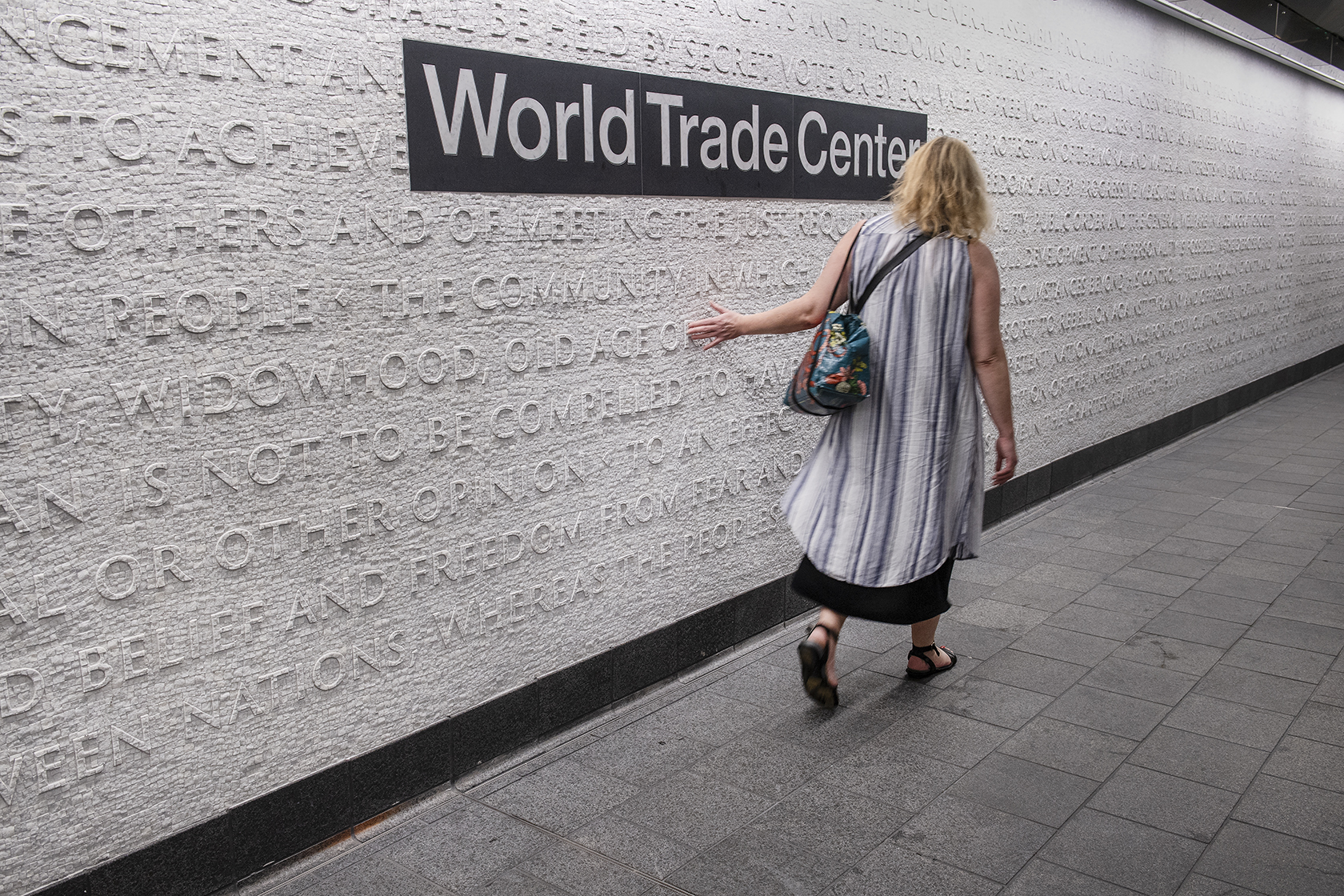 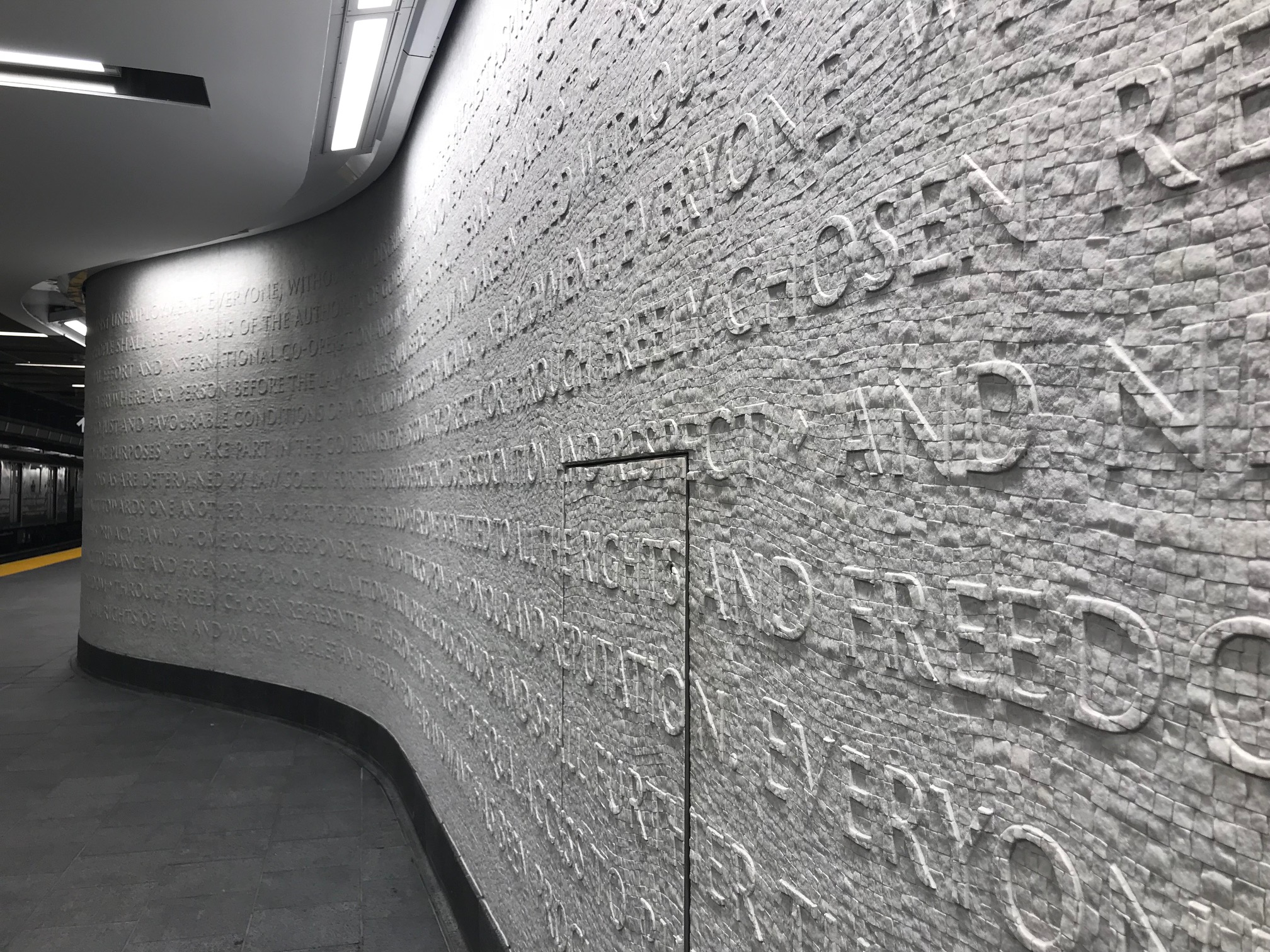 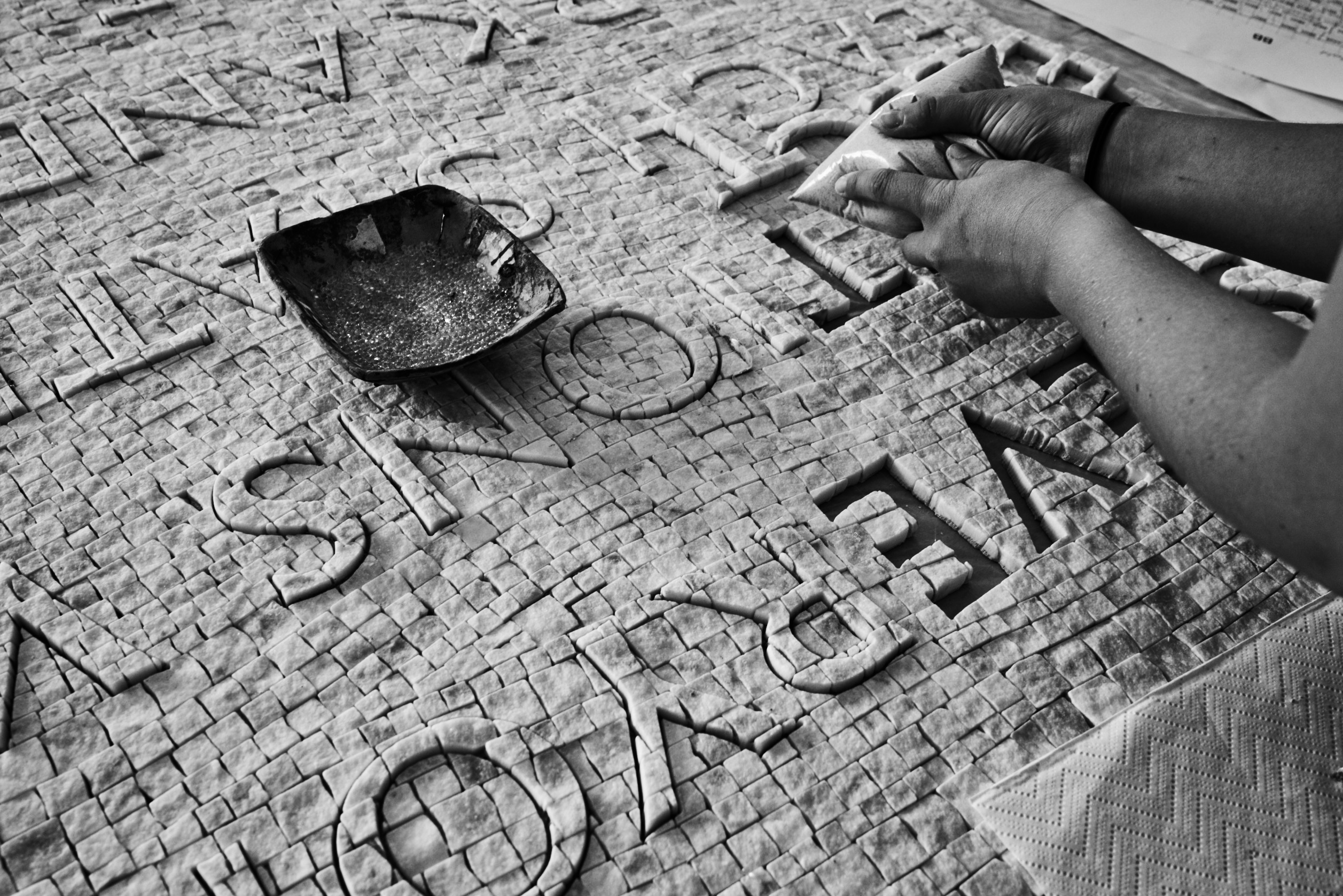 “CHORUS” is located at the World Trade Center Cortlandt Station in lower Manhattan. The locality is home to 60,000 residents, 300,000 daily commuters, 13 subway /PATH train lines, multiple ferries and 15 million annual travelers. Nearby are Santiago Calatrava’s Occulus, the 911 Memorial and Museum – a forceful mix of remembering the past and embracing the future. Ann Hamilton’s meaningful and monumental work is now an inextricable part of this historic site. The World Trade Center station reopened in September 2018, seventeen years after it was destroyed in the 9/11 attack.

Ann Hamilton wanted to make a seamless connection to this powerful confluence of architecture and history. “CHORUS” is based on two historic texts woven together – the horizontally placed text is from the 1948 United Nations Declaration of Human Rights -- and is interwoven with vertical text from the preamble of U.S. Declaration of Independence, which functions as a kind of “chorus” or “refrain” through repetition of key words and concepts. Hamilton’s text-based artwork spans both platforms of the Number 1 Line, totaling over 4,000 square feet, and utilizing approximately 10 tons of carrera marble. Hamilton worked with the Swedish typographer, Hans Cogne to find the right fit for these founding documents which emphasize the ideals and goals of our nation. They settled on “Trajan” which is a contemporary font modeled on inscriptions from Roman monuments.

Ann visited our studio in Munich, where she received an introduction to our materials and techniques which were new to her. She was initially considering working in glass mosaic or stone and landed on carrera marble. She was interested in using white marble to consciously adhere to the white palette of the Occulus employed by the architect Santiago Calatrava. A highly technical water-jet method was used to cut out each letter from the background mosaic, then these pieces were reinserted by hand, at a slightly elevated height.

Ann Hamilton is internationally recognized for her large-scale mixed-media installations that poetically respond to the architectural presence and social history of their sites. Hamilton is a MacArthur and a Guggenheim fellow. She represented the United States in the 1999 Venice Biennale. In 2015, Hamilton was honored with The National Medal of Arts, the highest award given to artists by the US government. She is a Distinguished University Professor in the Art Department of Ohio State University.