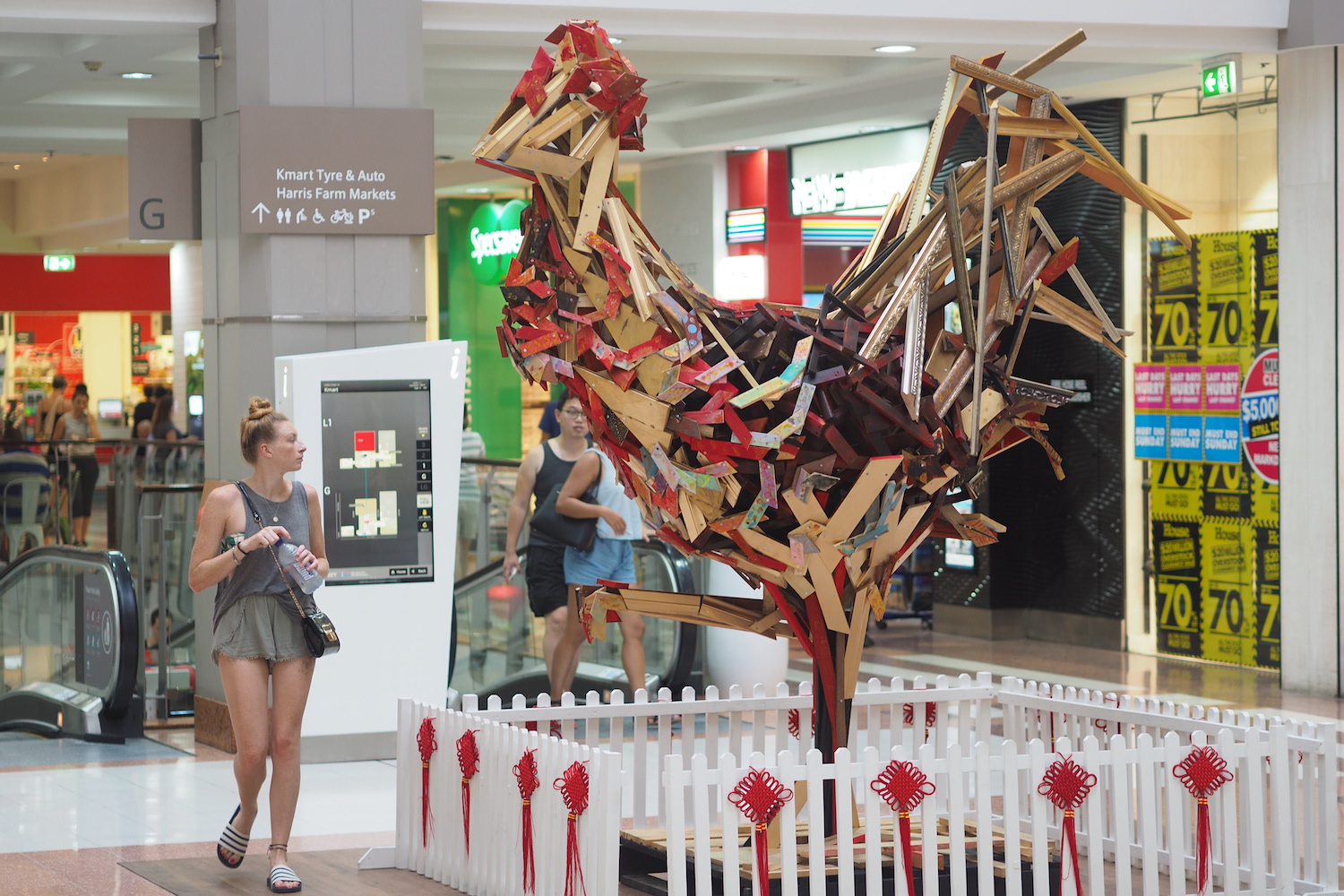 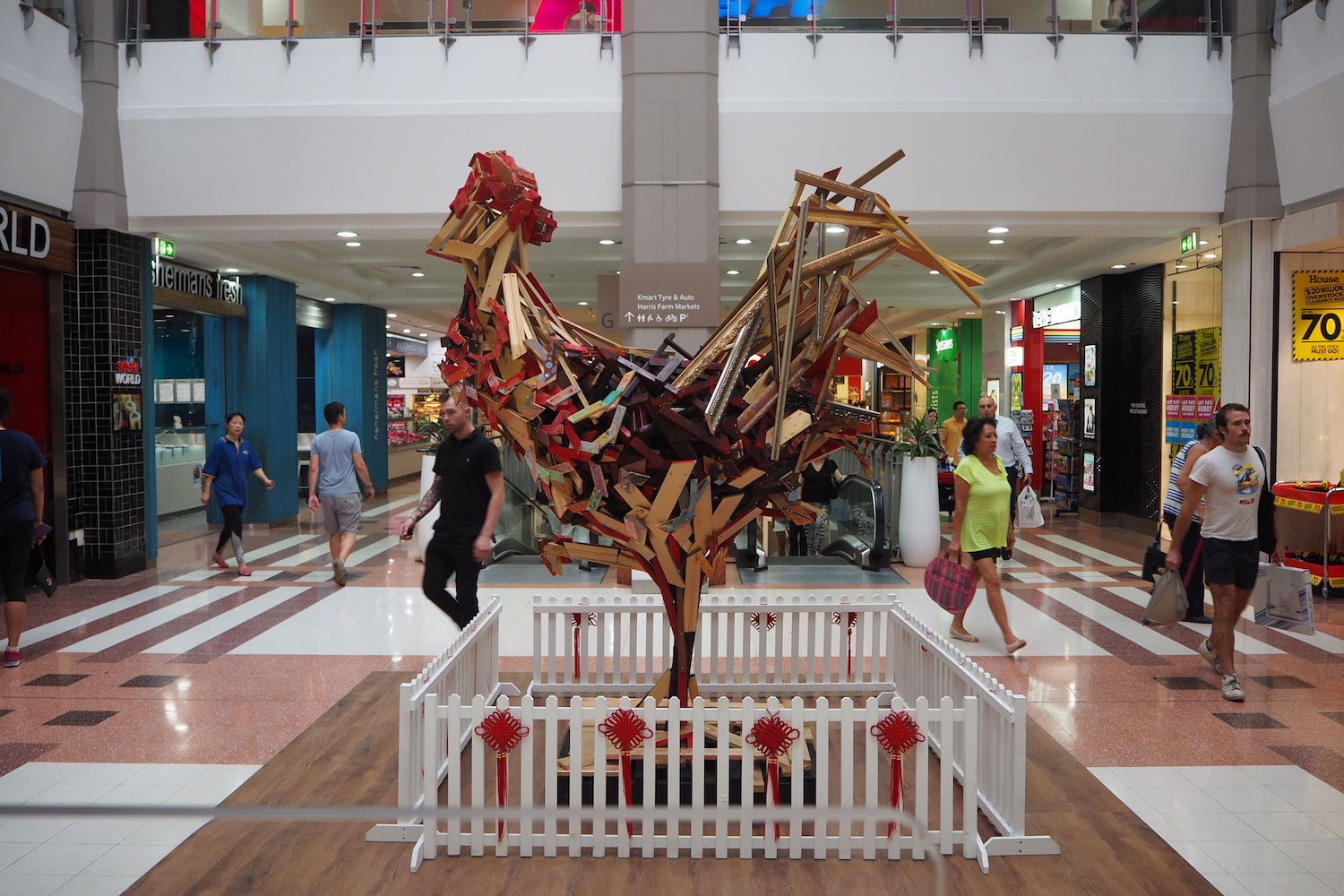 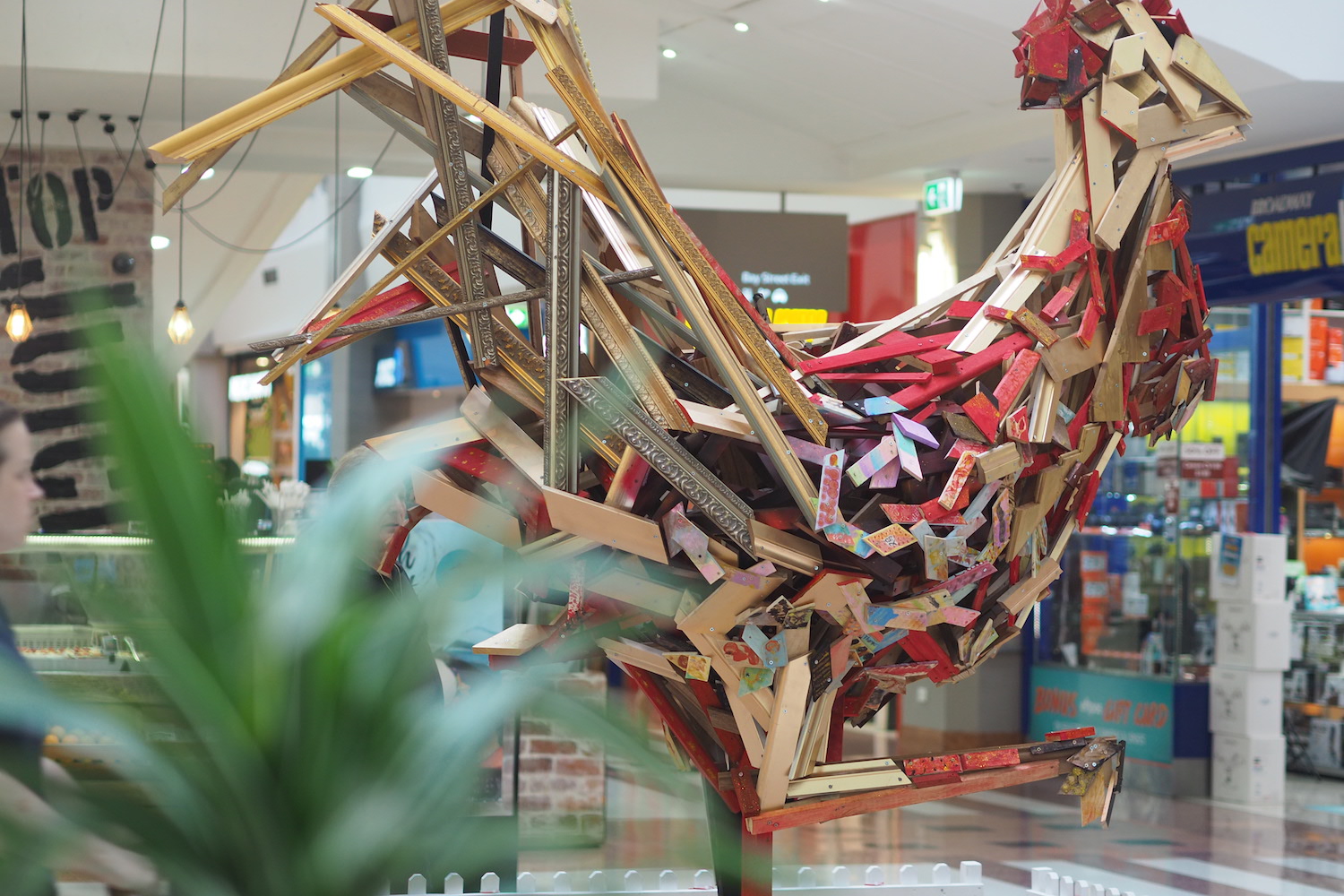 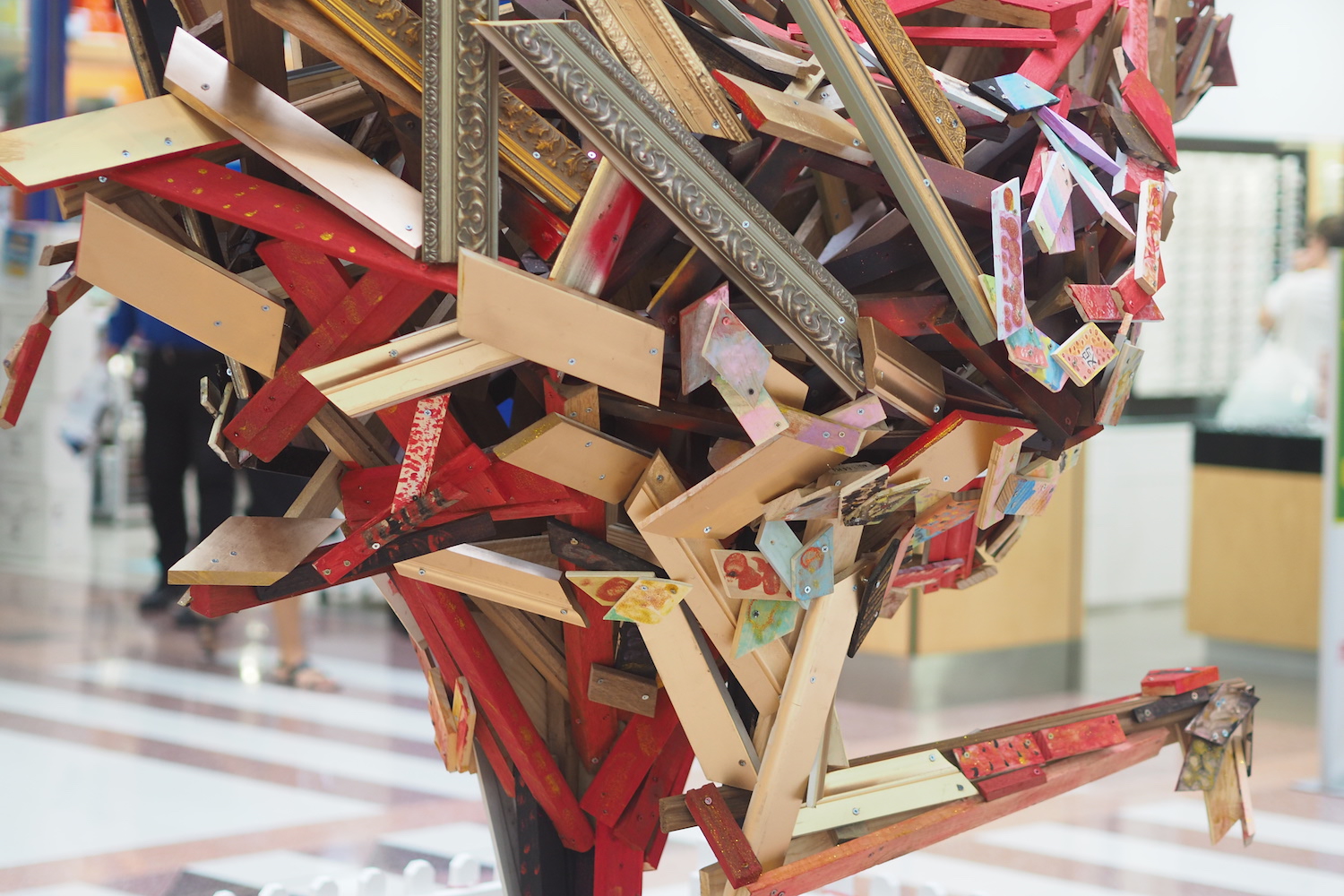 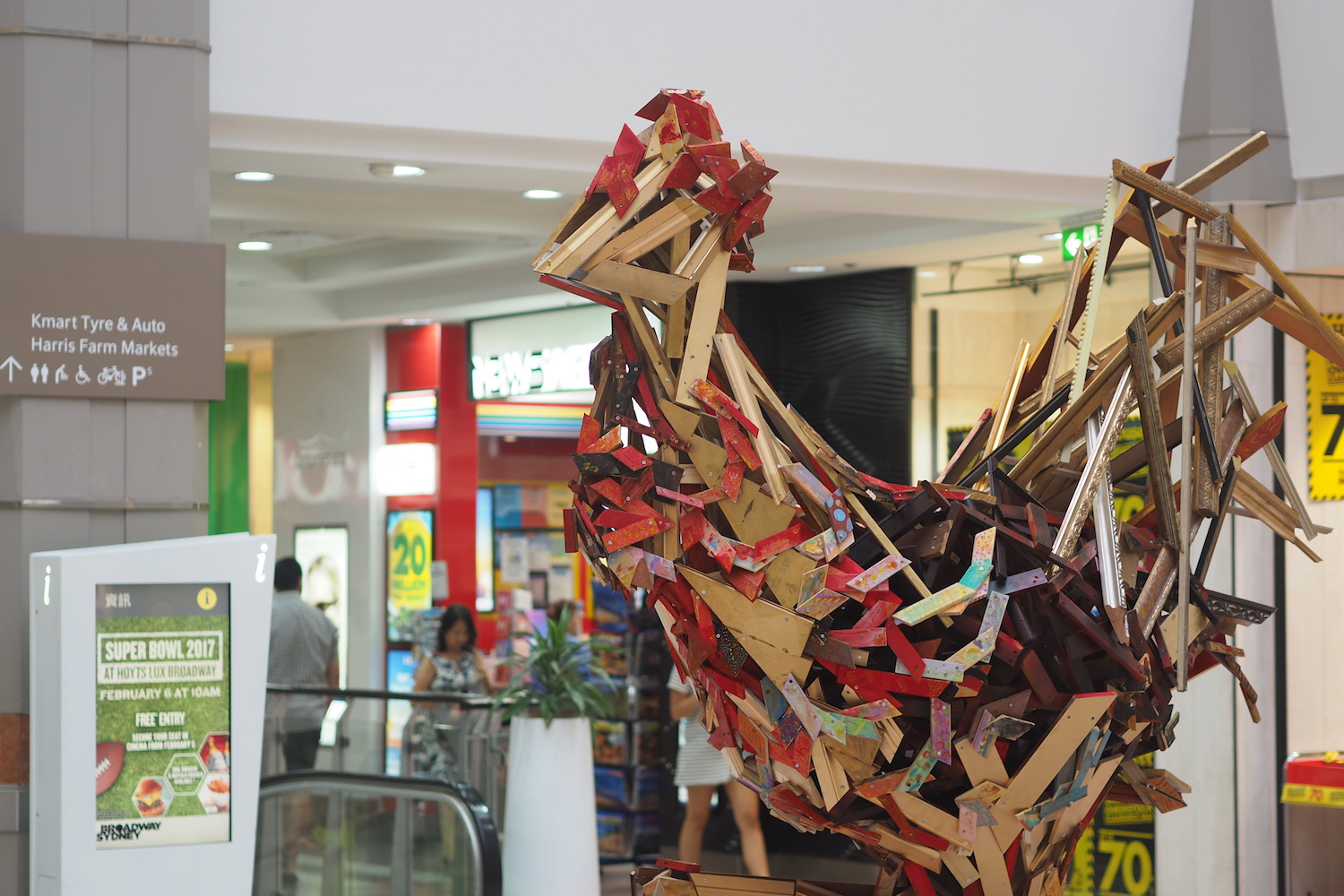 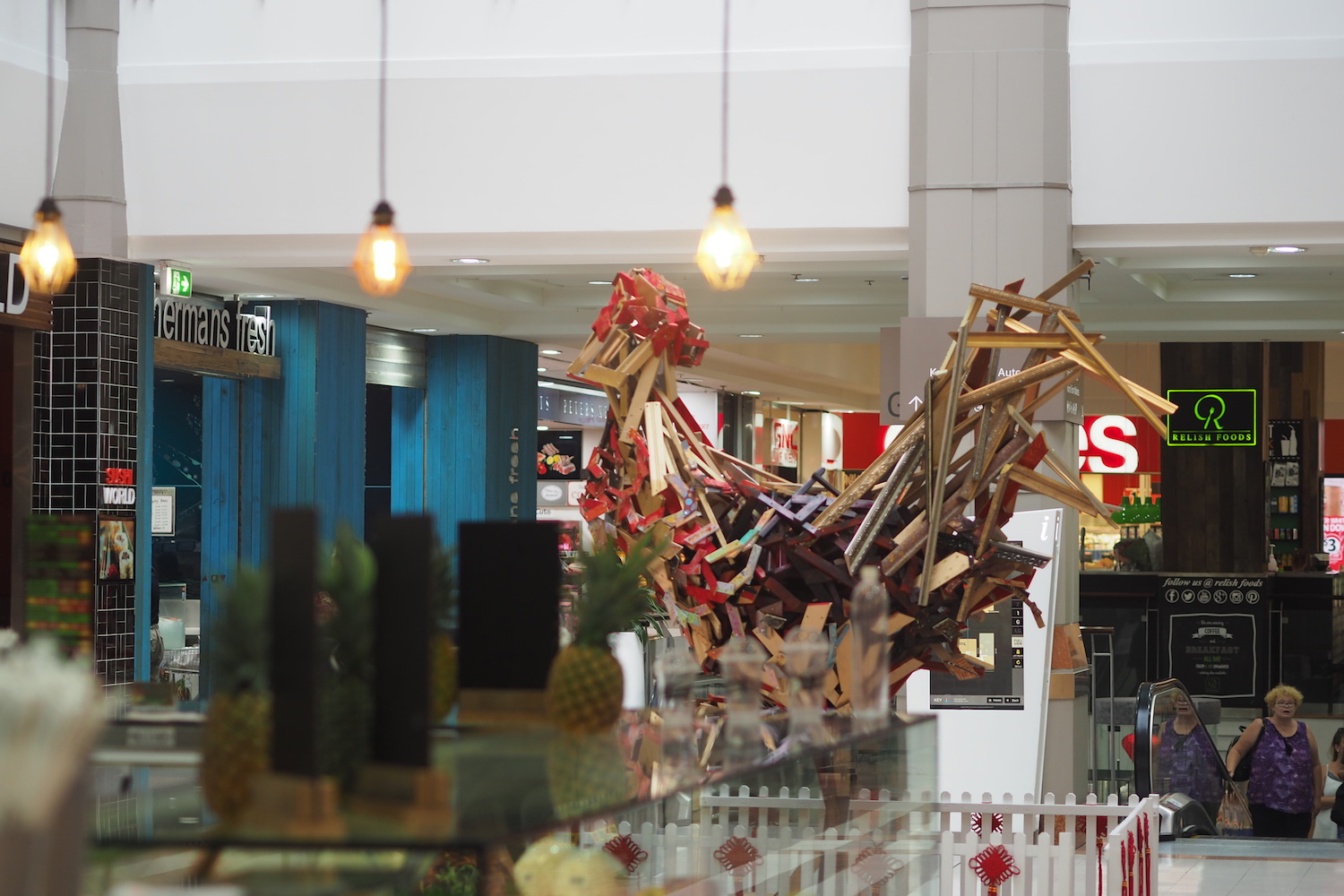 The Chinese New Year Rooster project consisted of the creation of a large-scale timber sculpture; and public arts and craft workshops at Broadway Shopping Centre in Sydney. The project was curated by Art Pharmacy Consulting, and commissioned by Mirvac.

In the build up to Chinese New Year, shoppers at Mirvac owned shopping center, Broadway Sydney, had the unique opportunity to observe acclaimed figurative sculptor Elyssa Sykes-Smith constructing a giant rooster in celebration of the Year of the Rooster.

Sykes-Smith’s work, which has previously has been featured in Sculptures by the Sea, is often site-specific and this piece is no different. Making full use of the expansive shopping center, the rooster stands at almost 3 meters high. Her signature, innovative use of recycled materials was similarly well suited to the project. Invoking ideas of regeneration, and renewal, her choice of materials perfectly captured the sentiment of Chinese New Year.

However, the community element of this piece was new ground for Sykes-Smith. She recalls, ‘I was trying to think of different ways to do that so I could still have compositional control of the project, while also incorporating the kids work’. In the end, she cut-up hundreds of pieces of timber, which children can paint on site, which were then incorporated into the structure of the rooster.
This community involvement resulted in an enchanting space, set up in the shadow of the Rooster, illuminated by fairy lights and cherry blossoms, where children could enthusiastically sit, talk and create. Their work reflects the wonderful diversity of Broadway Sydney, with children writing in Indonesian, Chinese, Japanese and many more.

The interactive element of the project proved to be fertile ground for Sykes-Smith. She explains, ‘Usually it’s more showing it to the community, whereas now they’re having some direct artistic influence, which is really nice…it’s nice not to have complete control over something’. Her young collaborators seem to be equally inspired, she noted that, ‘they like the idea of it, that they can write their name of a bit of wood, paint it, and it’s going to be part of something bigger’.

Not wanting to deprive participants of a souvenir, Sykes-Smith has also had miniature roosters laser cut, which children could take home.

The goals for this project were centred around community engagement and visual activation in of the Shopping Mall in celebration of Chinese New Year. The aim was to connect with the local community and provide an opportunity for children to engage in creative activities.

I was put forward as the preferred artist by Art Pharmacy Consulting, and was then commissioned by Mirvac to design a public workshop strategy and to design and create a large-scale rooster sculpture.

The workshops ran over the duration of seven days at the Broadway Shopping Centre, Sydney aimed to enable children to collaborate in the creation of designs on the small-scale timber pieces using paint, that were then included into the sculpture, and were a great success and focal point for community engagement.

The sculpture was partially created prior to the public activation, materials were prepared prior; the main armature and structural footings were designed and then assembled onsite immediately. The timber rooster sculpture was then constructed in public over seven days incorporating the decorated timber elements from the public art workshops.