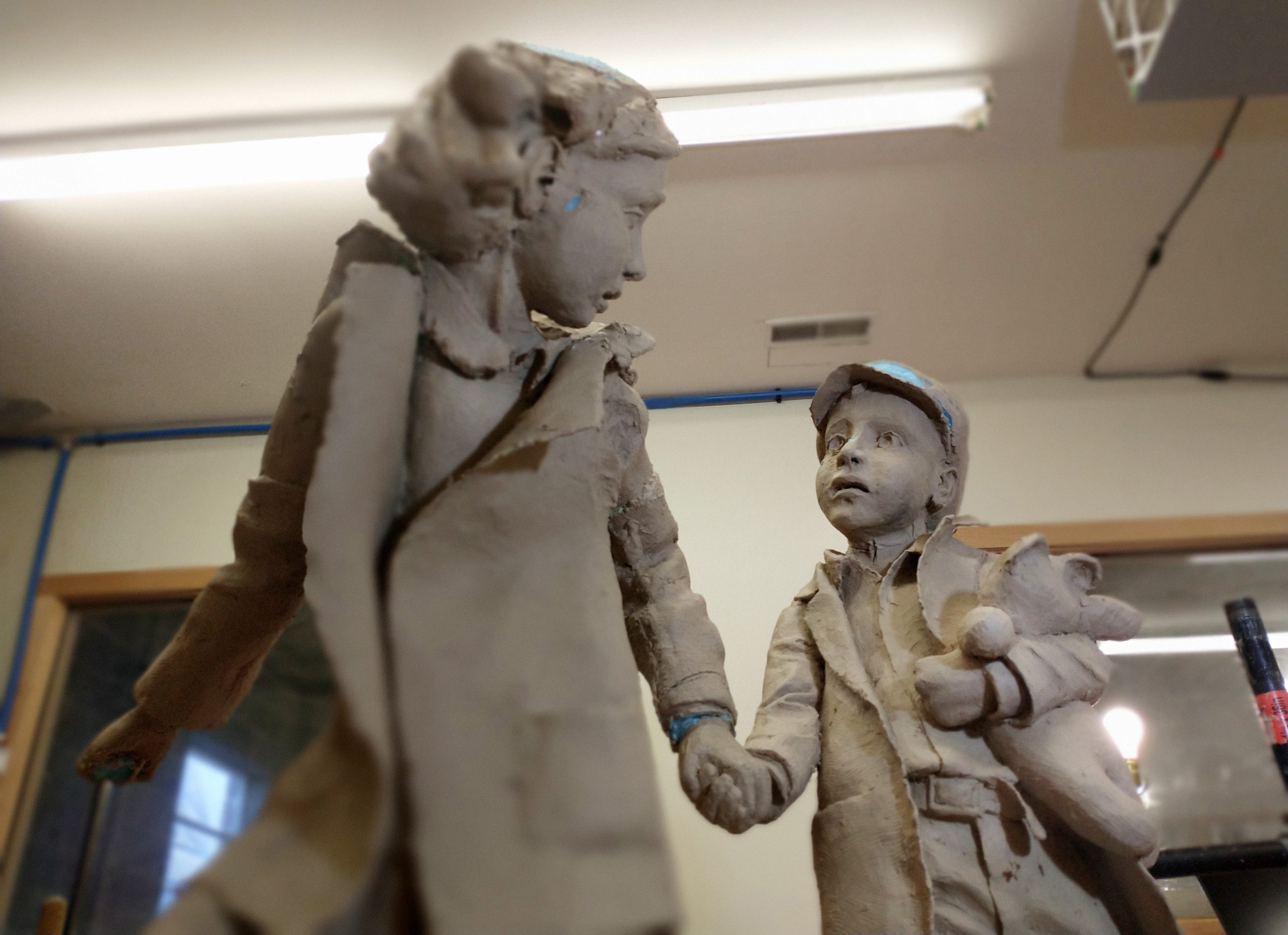 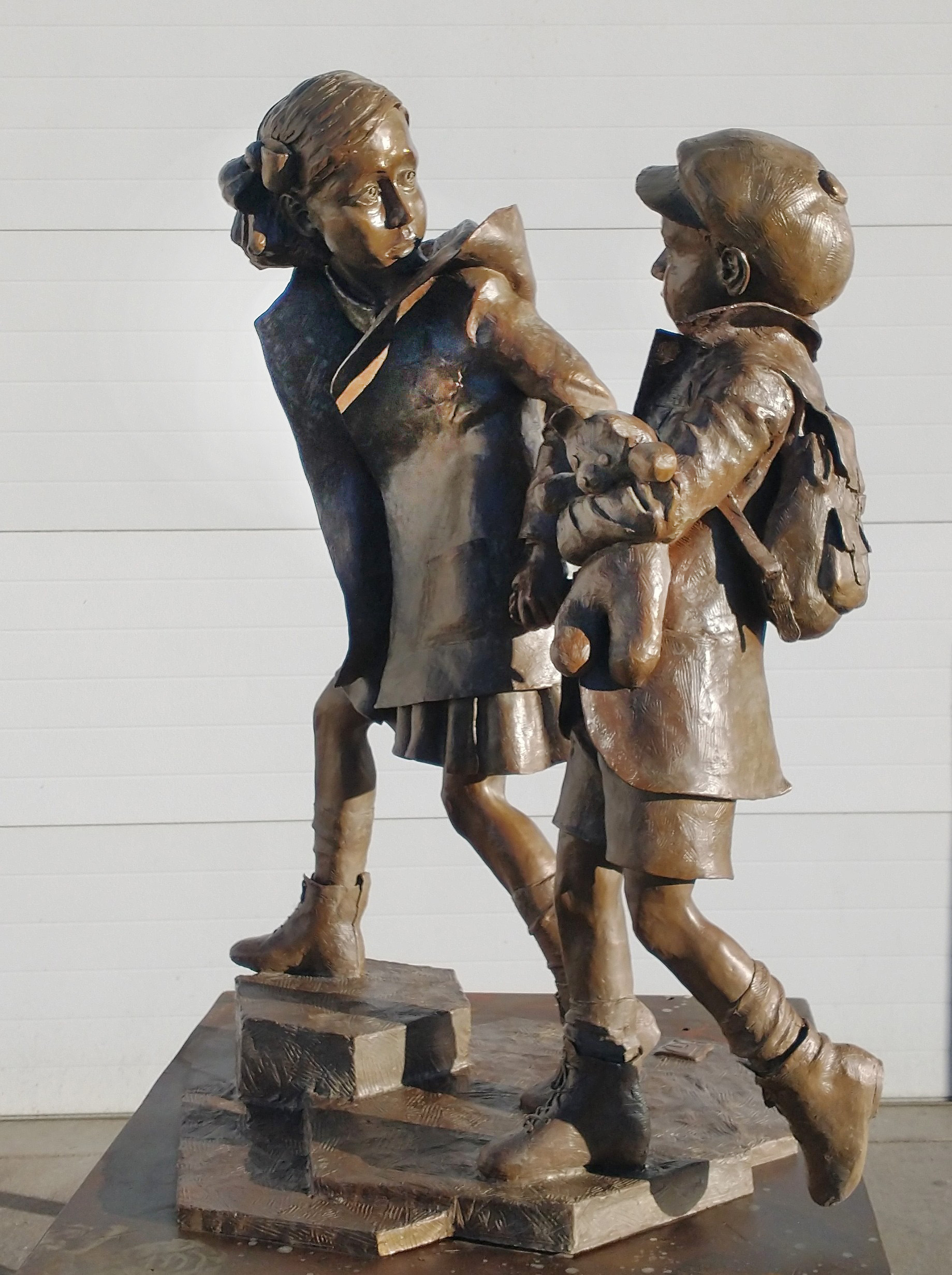 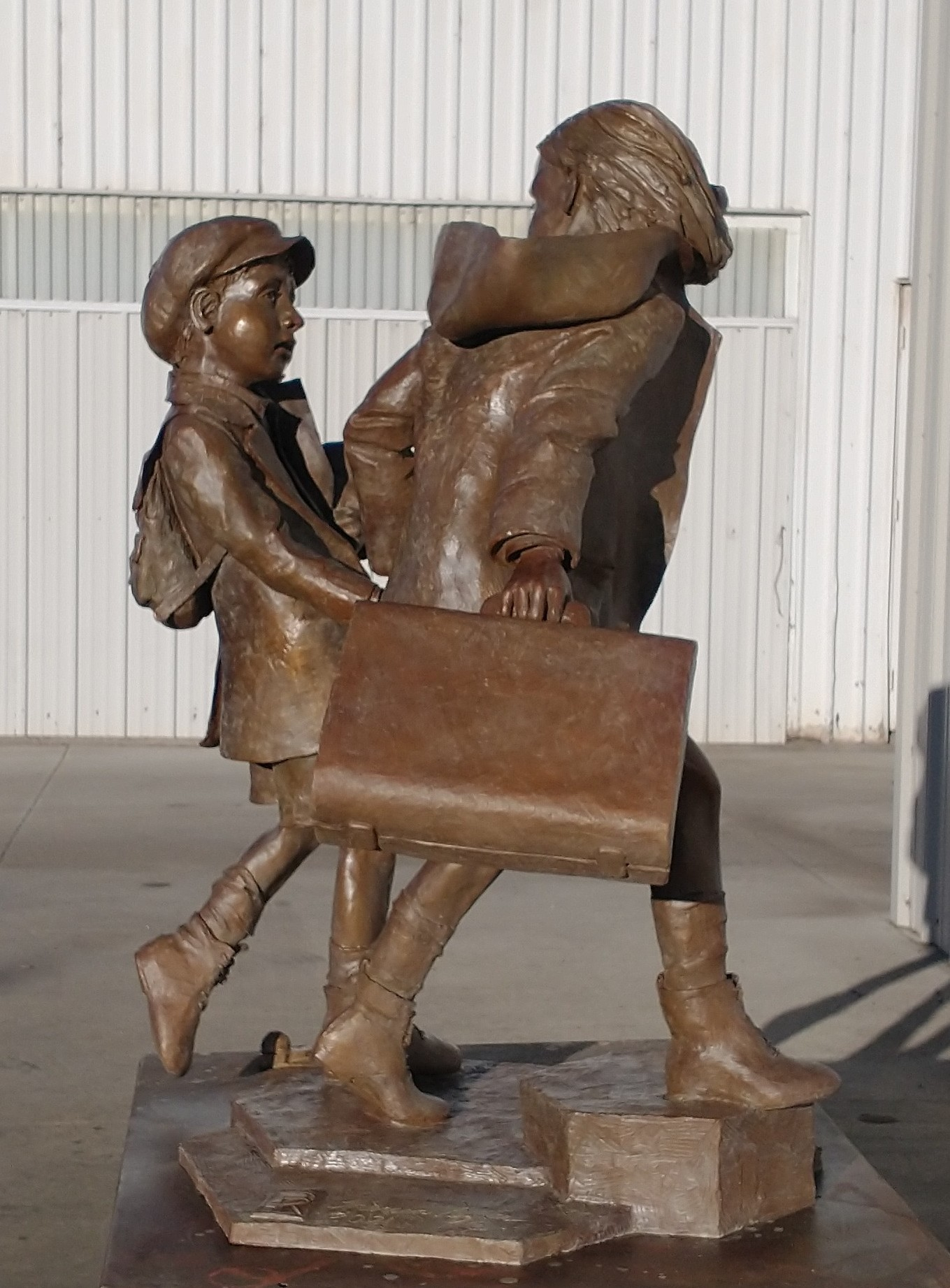 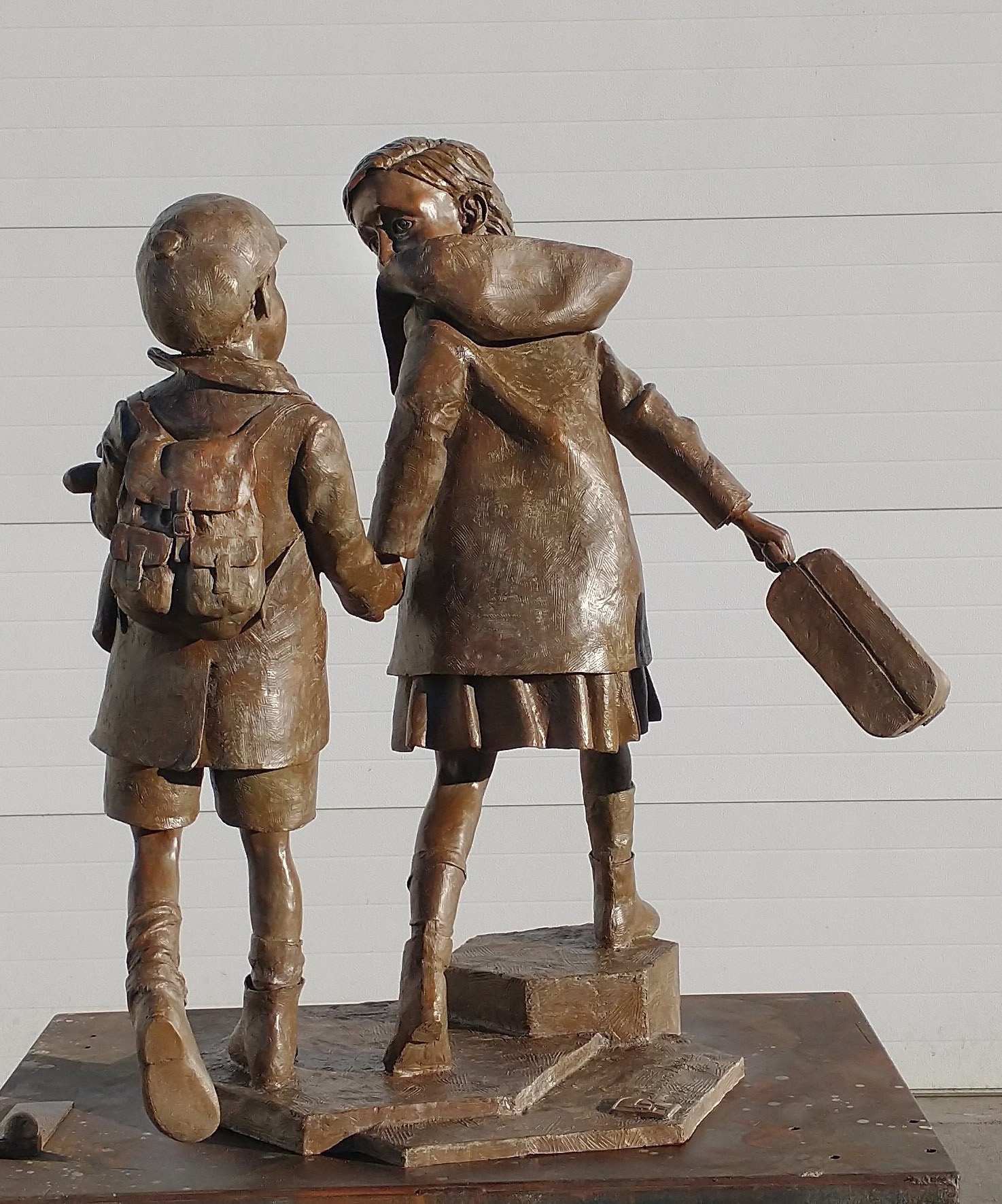 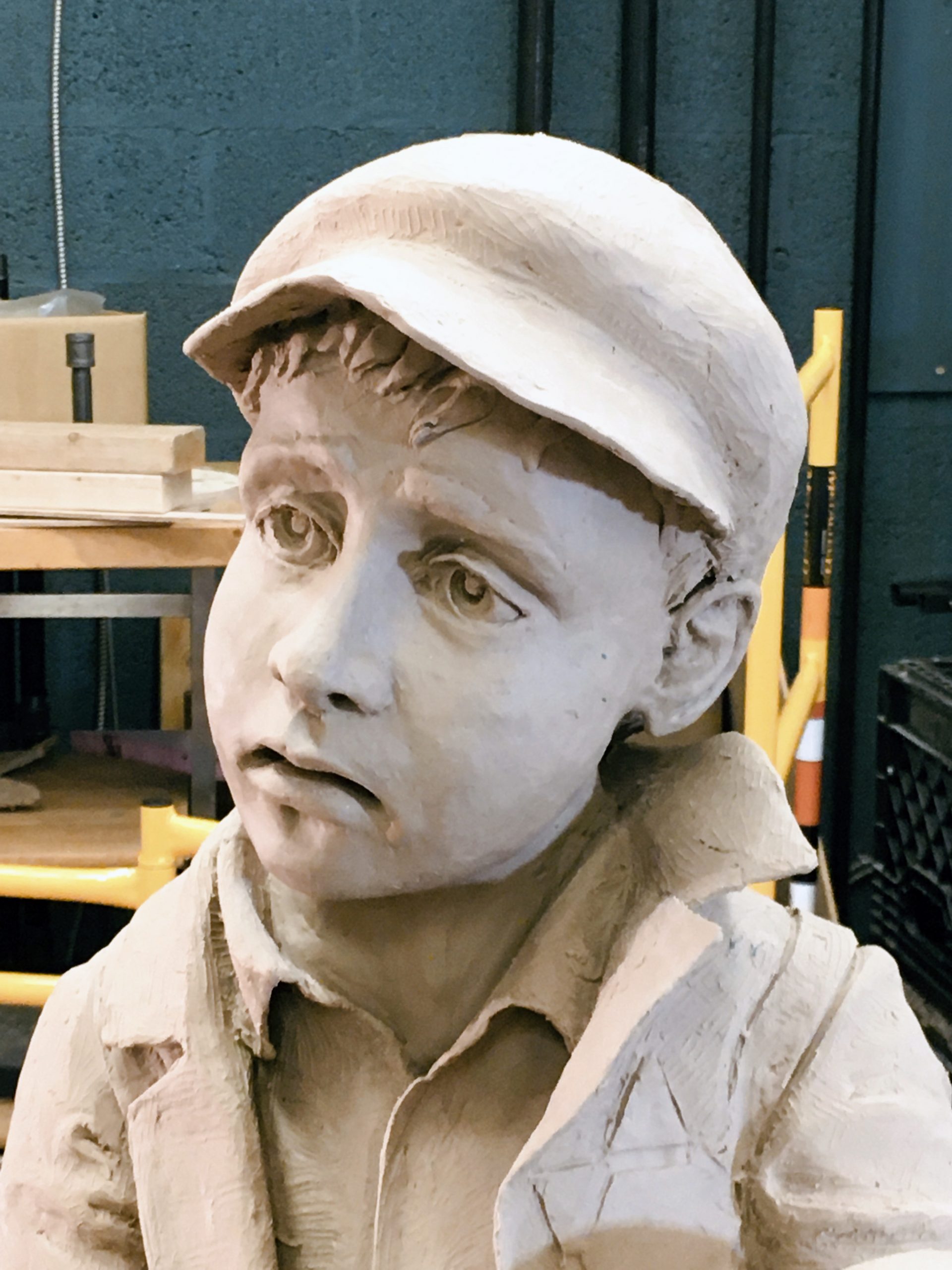 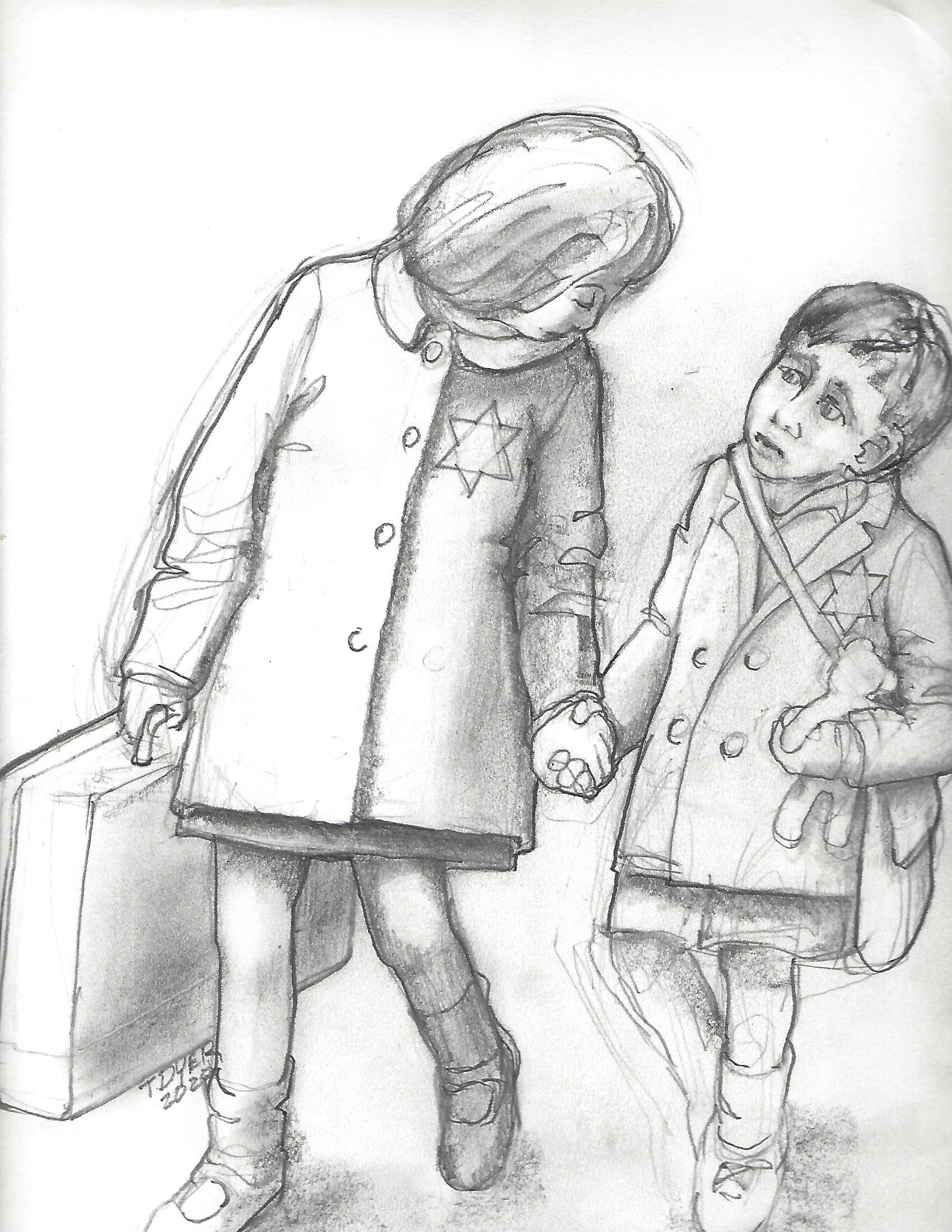 A memorial to all children of the Holocaust, this statue depicts two children, ages six and ten, in flight. The boy clutches a teddy bear while the girl urges him on by pulling him by the hand. Both children wear Star of David badges on their jackets. They are packed for travel with suitcase and backpack.The statue is 4 feet tall. Shoah is the Hebrew word for “catastrophe”. This term specifically means the killing of nearly six million Jews in Europe by Nazi Germany and its collaborators during the Second World War.

Frances Cuttler Hahns’ mother was killed at Auschwitz during the Holocaust. It was her wish to honor her parents and her husband with a memorial to all children effected by this tragedy. The composition was to show two siblings in flight. Even though most children involved were ultimately killed, Mrs. Hahn wanted this memorial to be hopeful. Originally it was requested that the children be shown stepping through rubble of bricks of destroyed buildings. I placed the children on an ascending base of hexagons, which represent the center of the Jewish Star, showing that these children were supported by their faith. The older sister is looking back at her brother, the suitcase she’s caring, flung back as she turns to him, urging him to hurry.
This suitcase is based on the original one that Frances Hahn and other Jewish children were given to hold their few possessions when they were given passaged to the United States to escape. She still has this small cardboard suitcase.

The project began with several meetings with the Hahns, Rabbi Laurie Rice and her staff which resulted in several sketches and a maquette showing two children. From the maquette a digital enlargement was made, and clay sculpted. Molds were made and the piece was cast in bronze and then shipped for installation.

Congregation Micah is a Reform synagogue serving all of Middle Tennessee. The sculpture was completed by the promised date in November, 2021. A dedication is scheduled for April, 2022.