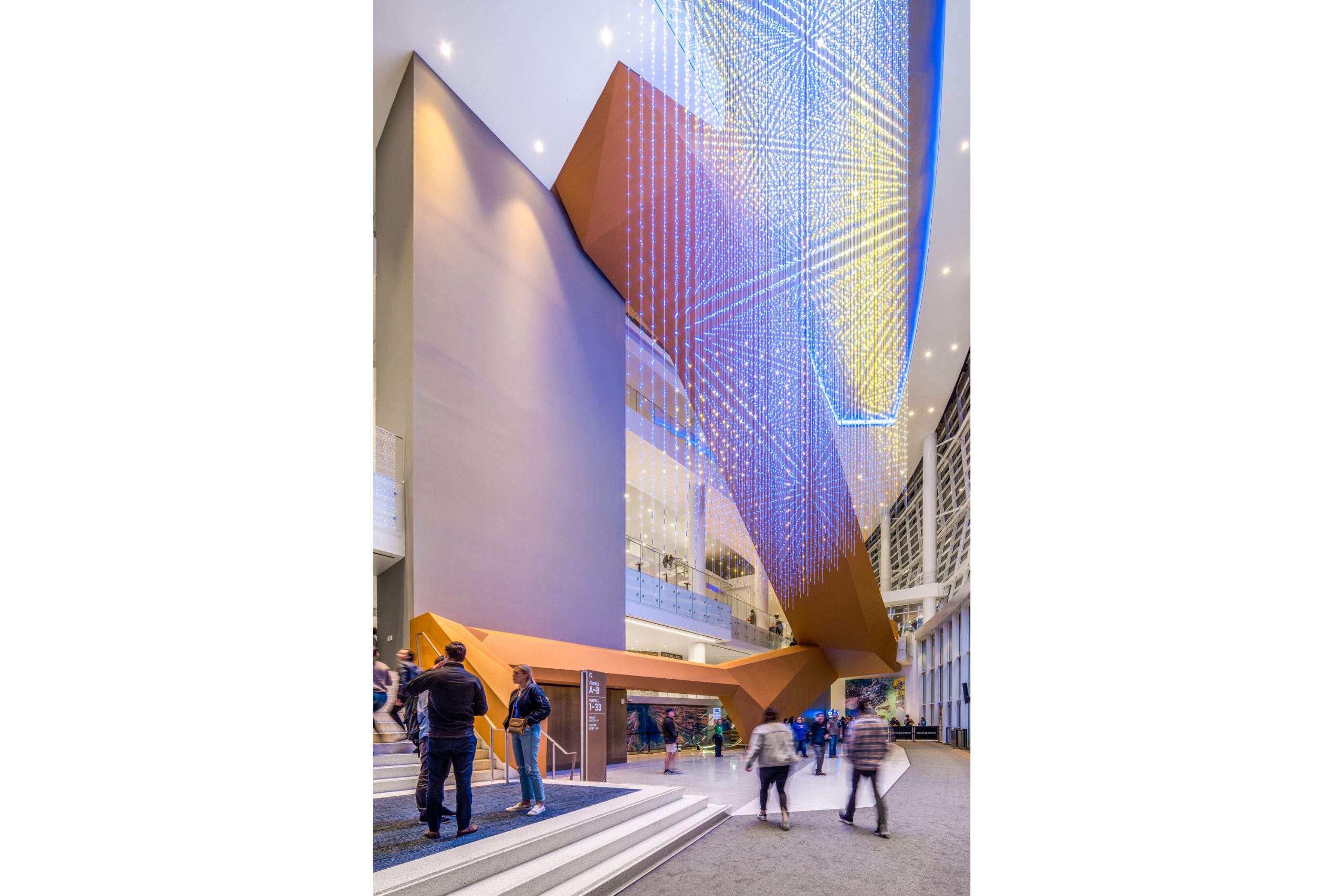 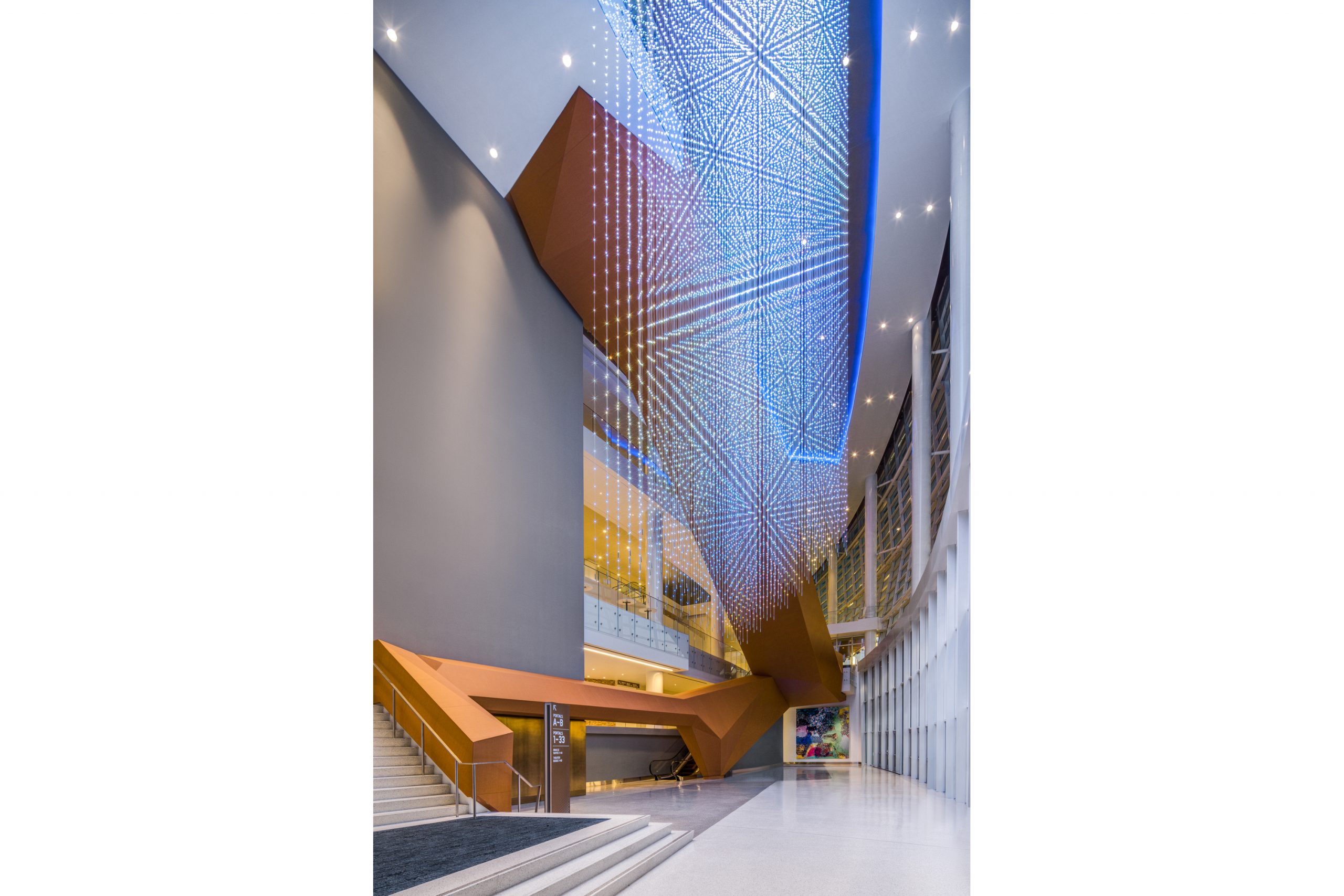 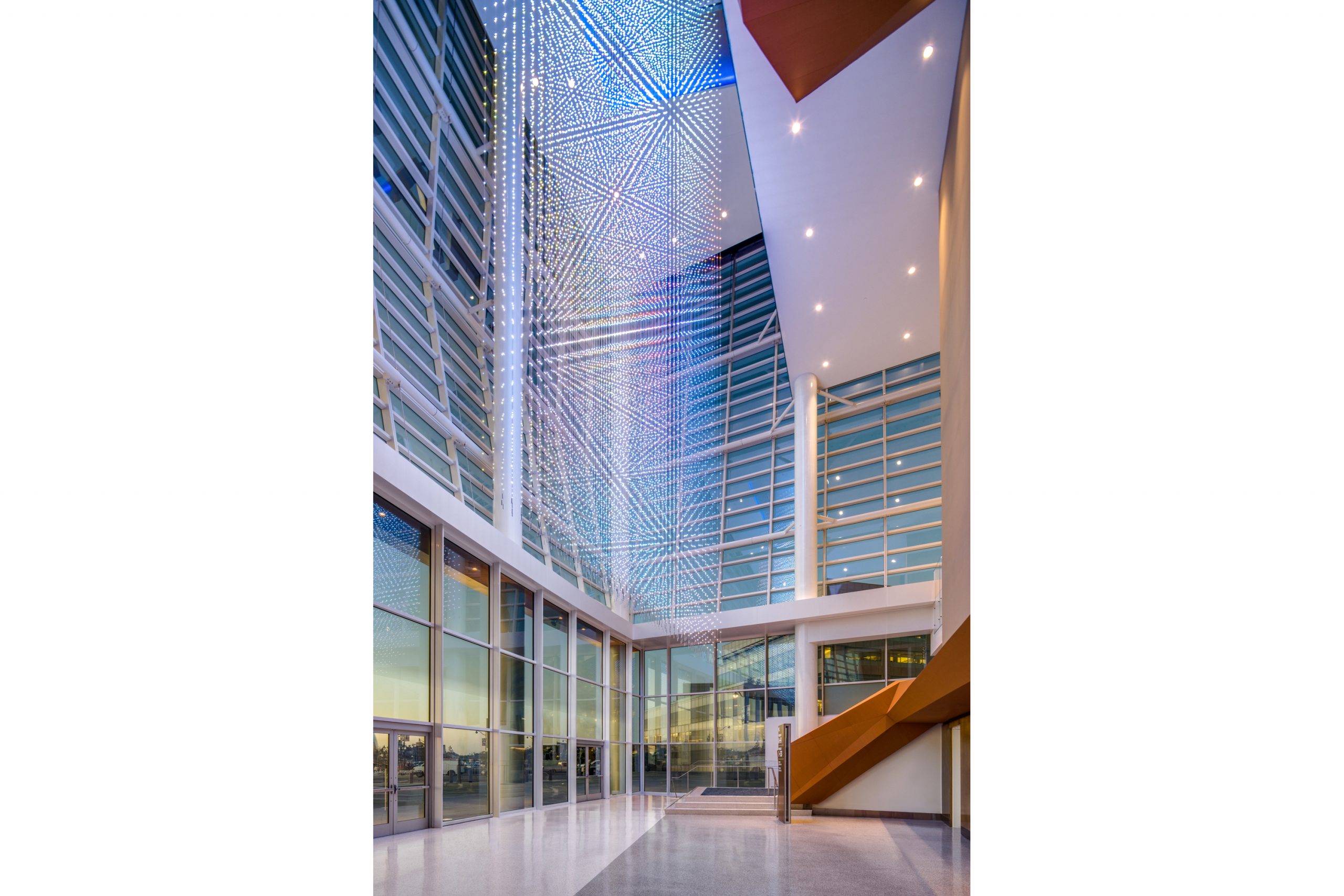 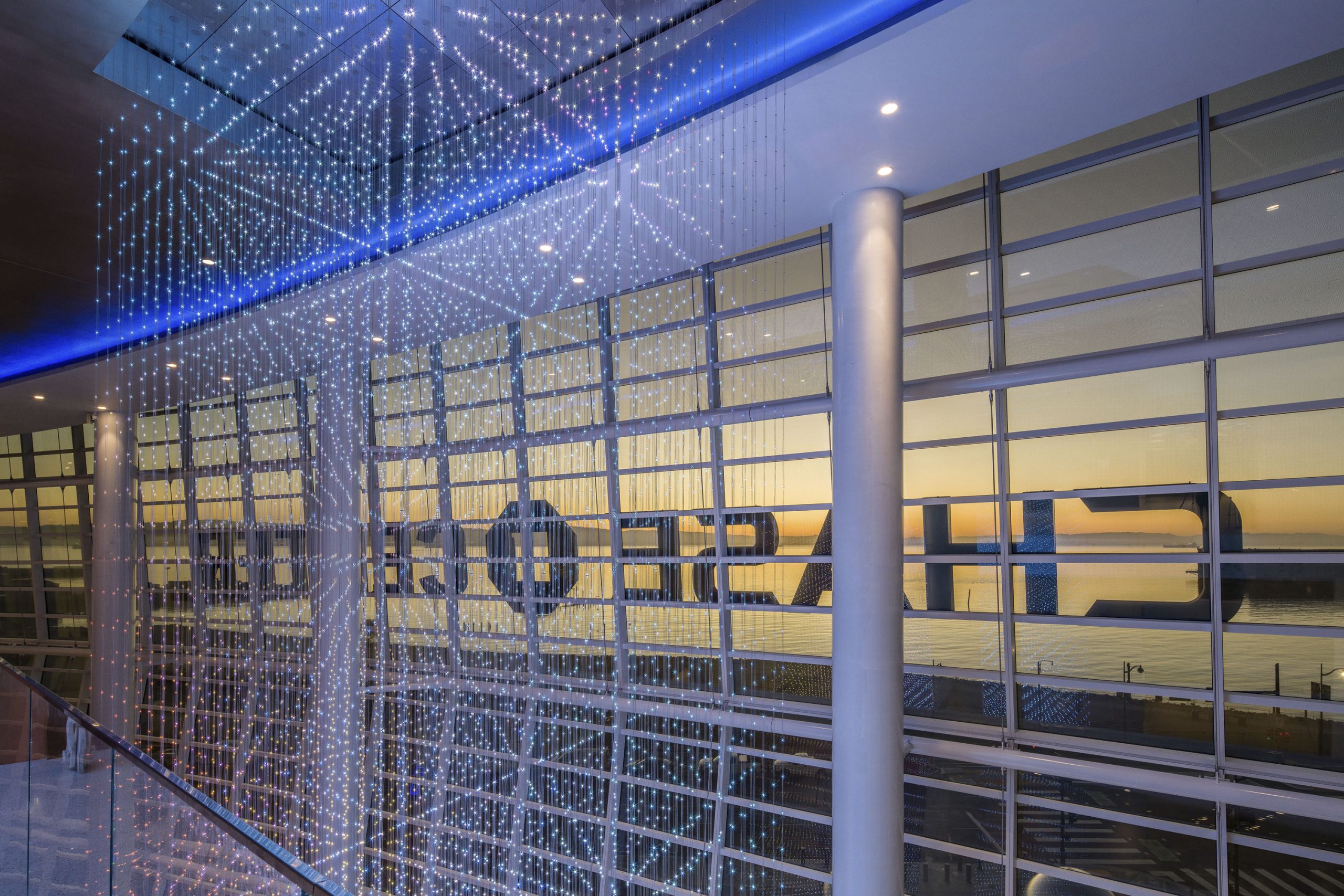 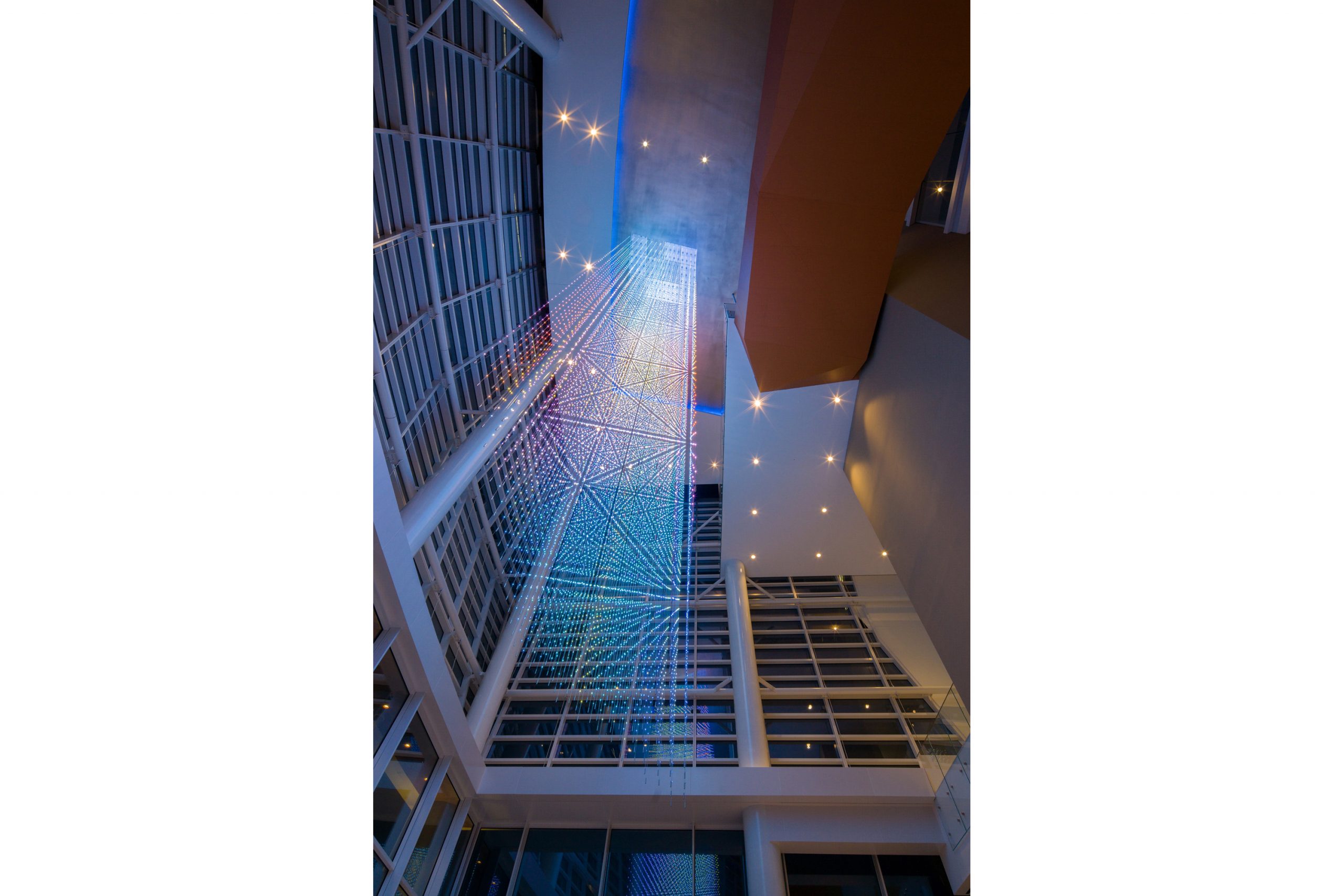 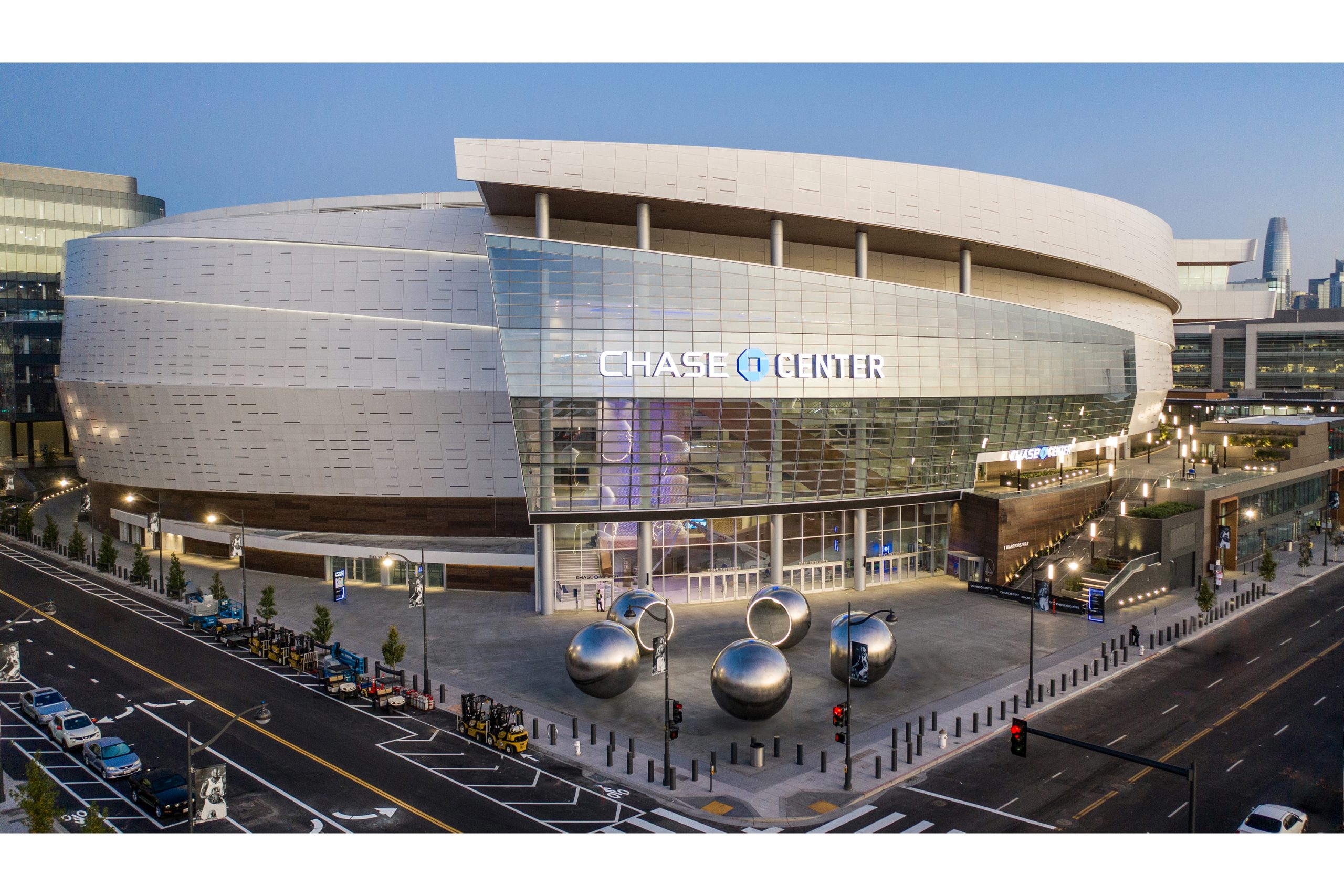 An elegant, high-tech LED chandelier adds beauty and intrigue to the entry lobby of the new Chase Center Arena, home to the Golden State Warriors. At 69 feet tall, 15 feet wide, and 20 feet deep, the artwork is both iconic and ephemeral, responding to the massive volume of the area’s main entrance without obstructing the stellar views of the San Francisco bay and skyline. With over 20,000 individual LED pixels and 336 strands, the chandelier is a mesmerizing addition to the arena’s busy VIP entrance, whether it is viewed from above or below. The lighting control, colors, and patterns of the LED pixels are programmable, allowing the client to create different atmospheres that cater to different of events held at the 18,064 seat, multi-purpose arena. The chandelier is a refined combination of high-tech craft at the micro-scale and a poetic creation of the feeling of wonderment at the macro-scale. When needed, it serves as a large 3D video screen displaying generative visual programming as well as signage, and can even be extended into playing 3-Dimensional Video. In its more geometric visual form, the chandelier’s glittery, galaxy-like effect not only echoes the city’s skyline at night, it is an homage to the inspirations of aspiring young players to reach for the stars.

Golden State Warriors wanted an iconic artwork that would beautify the VIP East Entrance of its new multi-purpose arena, the 18,064 seat, 450,000 square foot Chase Center. It reflects the Center’s reputation as a first-class entertainment arena offering a high-tech premier entertainment experience with state-of-the-art amenities. Our goal was to create an artwork that would help the client express their brand during different types of events and atmospheres. Technical challenges included creating a large-scale artwork that could be suspended from a ceiling with a strict weight restriction. Additionally, we were challenged to design, fabricate, and install a 16-month project within a compressed timeline of 9 months.

The design and installation process was a highly involved collaboration between our firm, the client and their representatives, the interior architect, engineers, and electricians. With a challenging installation required at the top of a 90ft scaffolding, we collaborated with the client on the solution for using a Unistrut grid that supports the pattern of panels that we defined would make the installation possible. Because of its original steel structure, the maximum weight for this object was 5000lb with the final sculpture weighing about 1500lbs. Additionally, we redesigned our ceiling panels and installation process to ensure that the artwork could be installed with hidden front-facing fasteners to create a more seamless aesthetic. In order to help the client more easily program the LED chandelier to change pattern and atmosphere for a variety of events, we worked with Volvox Studios to create a user-friendly software interface. Using this interface, the Chase Center Media Team can create their own designs and could even play 3D videos of basketball players in the LED artwork from a 3D video file.