Celebration for a Champion - CODAworx 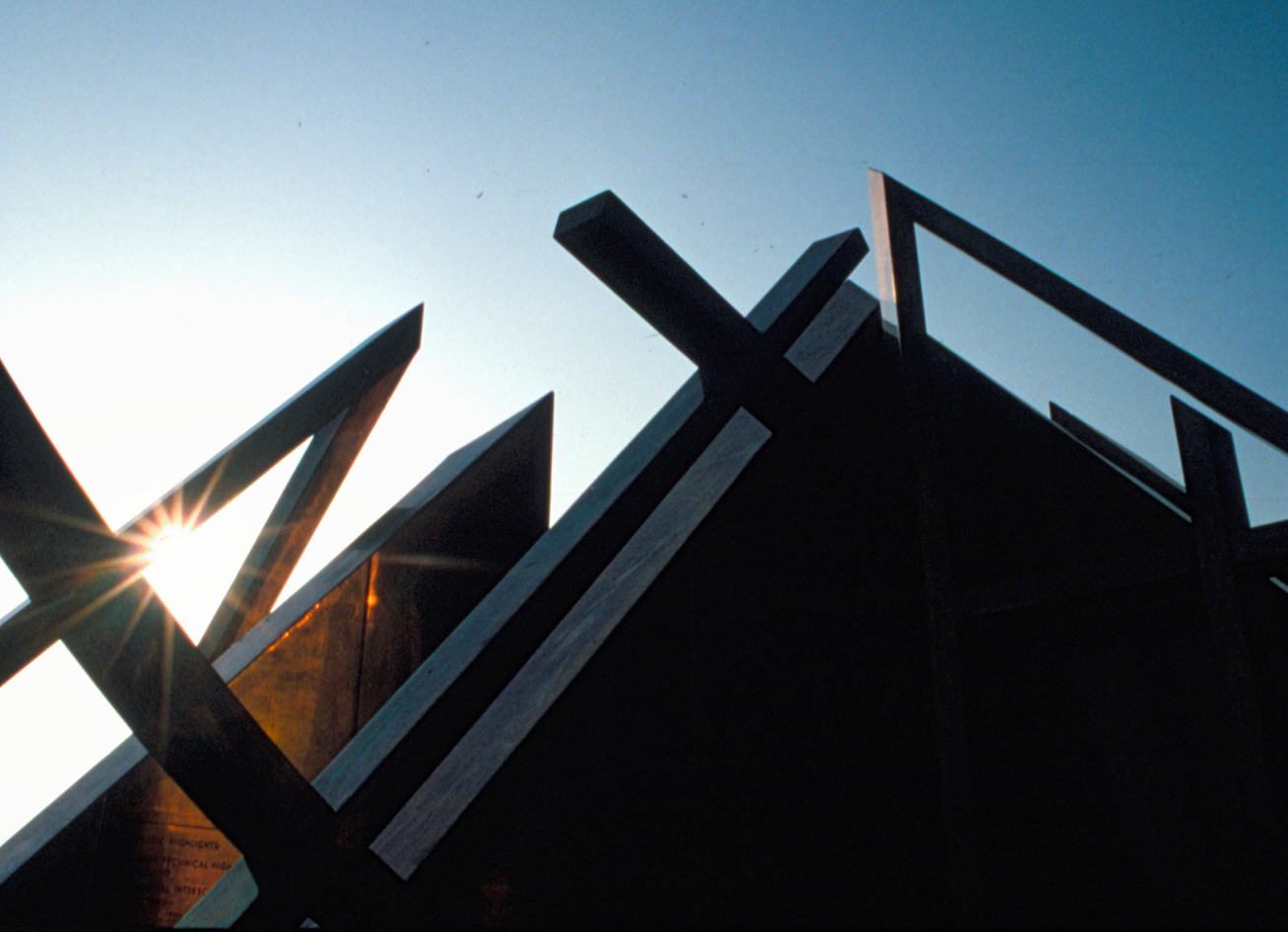 Located on the Jesse Owens Plaza at The Ohio State University stadium in Columbus, Ohio, “Celebration for a Champion” greets hundreds of thousands of visitors annually. The sculpture pays homage to one of America’s most iconic and legendary athletes, Jesse Owens.
The four equilateral triangular elements in this piece are symbolic of the four gold medals he won in the 1936 Olympics and many of the challenges he overcame. These elements are oriented to encourage pedestrian ingress into the sculpture, just as Mr. Owens entered the hearts of many Americans with his remarkable performance and life as a humanitarian.

The Ohio State University initiated this sculpture project, which was funded by the State of Ohio. The four goals for integrating the commissioned work, “Celebration for a Champion” were:
1. Acknowledge Jesse Owens’ performance as a student athlete
2. Highlight his exemplary behavior as a world class citizen and humanitarian
3. Develop a piece that is significant in scale, but does not obstruct the flow of pedestrian traffic into and out of the stadium.
4. Provide a space for text highlighting his accomplishments.
The goals set forth for this project were critical to and collectively satisfied by the design of the “Celebration for a Champion” sculpture. The four elements of the piece are emblematic of Mr. Owens’ most notable achievement as a student athlete; the four Olympic gold medals he won in 1936. Together they form a pyramid indicative of the ascendancy and strength he exuded as a humanitarian. The scale and design of the sculpture is complimentary to the stadium’s magnificent rotunda. The sculpture is penetrable and pedestrians can readily walk thru or around the piece. On each of the interior walls of the piece are quotations by Mr. Owens, along with documentation of his athletic achievements.

This project was executed in collaboration with the selection team of The Ohio State University and their Landscape Architect. In addition, the University sought and attained input from Mrs. Owens, Jesse Owens’ wife, regarding this tribute. I, along with other members of the team, had the opportunity to travel to Mrs. Owens’ home in Arizona to gain further insight into this man’s life and legacy. This included reviewing various memorabilia, the most outstanding of which were his four gold medals won at the 1936 Olympic Games. There were a total of four milestone reviews for the 12 month project; during each milestone review key progress and estimated lead time to completion updates were made to the Assistant Vice-President of Campus Planning, William J. Griffith and Art Department Chairman, Bob Stull. The project was completed and installed in 1984 in front of the campus’ prestigious stadium on schedule and within budget.

It was a pleasure collaborating with the members of the selection committee and Mrs. Owens. “Celebration for a Champion” stands 13 feet high, is 35 feet in diameter and weighs approximately 8,800 pounds. At the dedication of the project the selection committee, members of the community and Mrs. Owens expressed their sincere appreciation for the work. As expressed by The Ohio State University Art Department Chairman, Bob Stull, “What does one say when the rainbow has been achieved? Your sculpture has the power and integrity seldom encountered in our discipline.”.