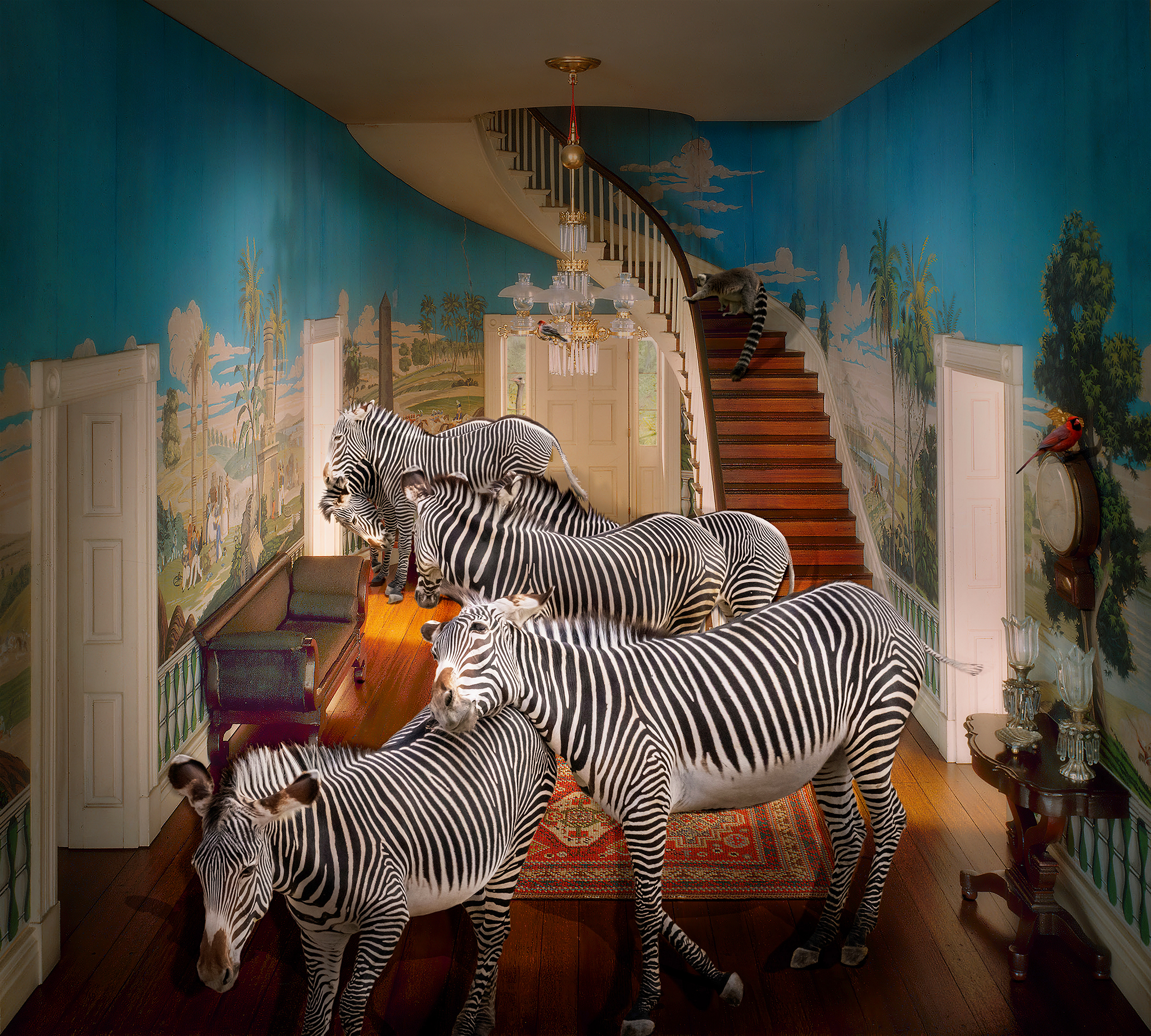 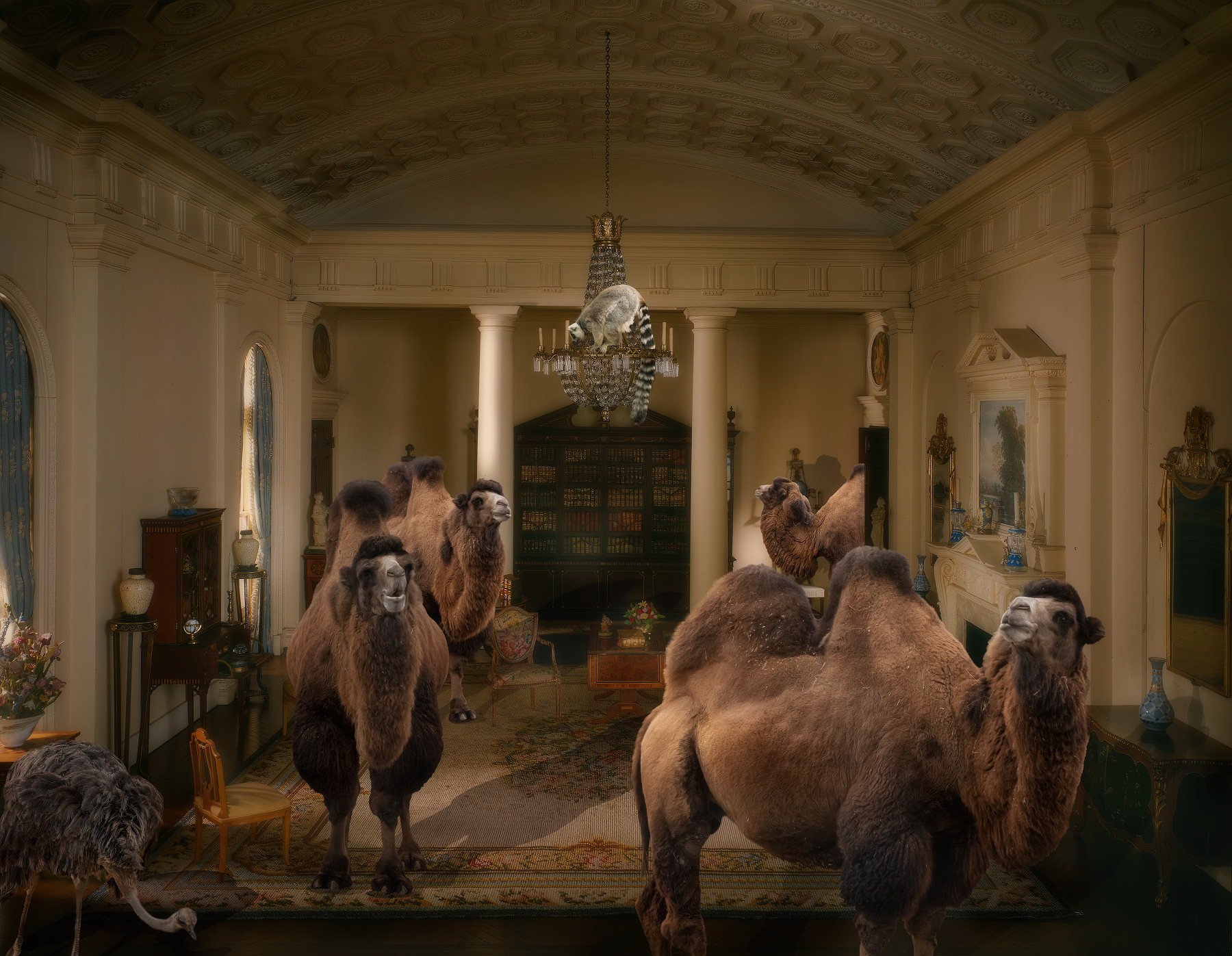 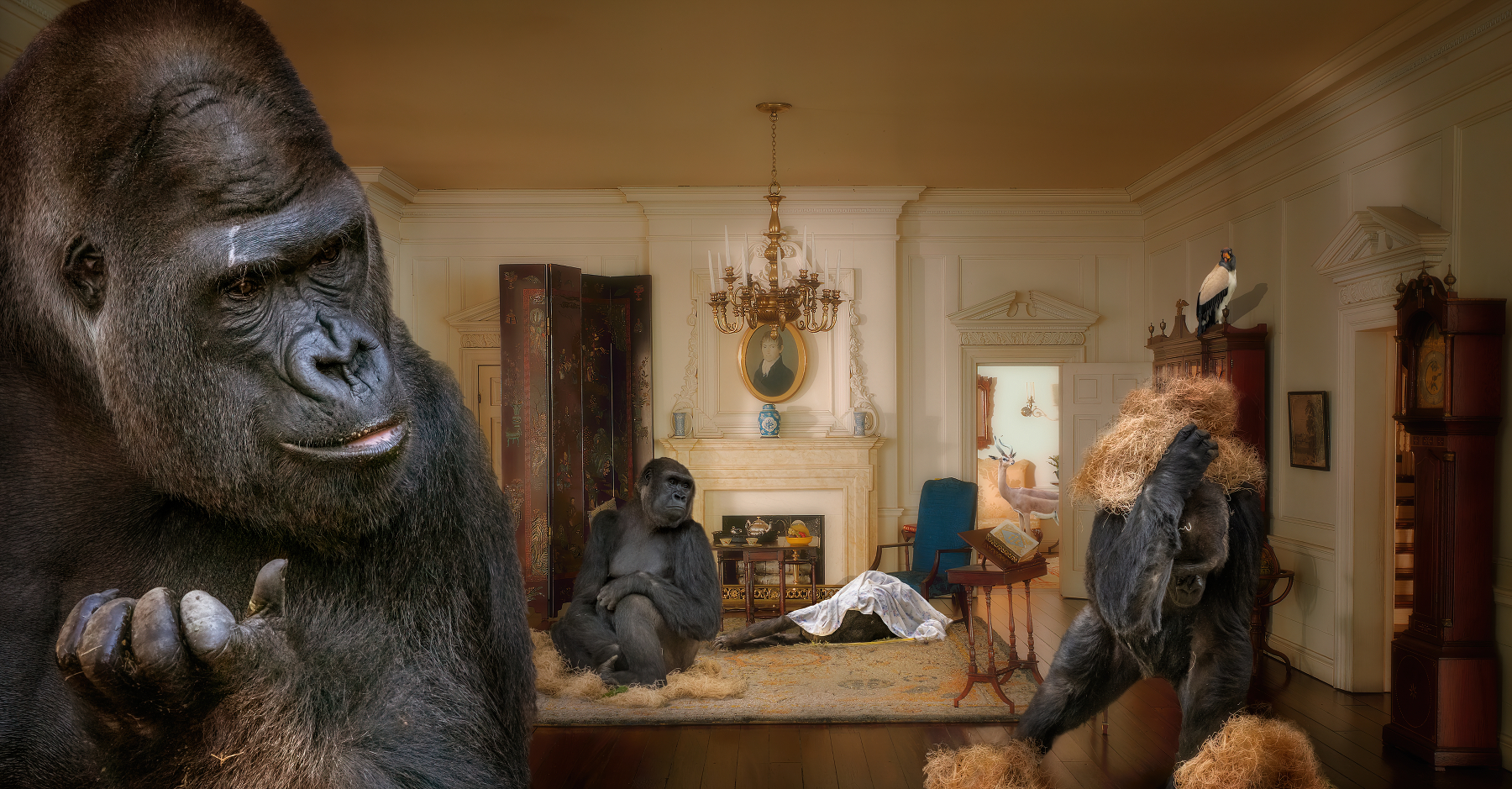 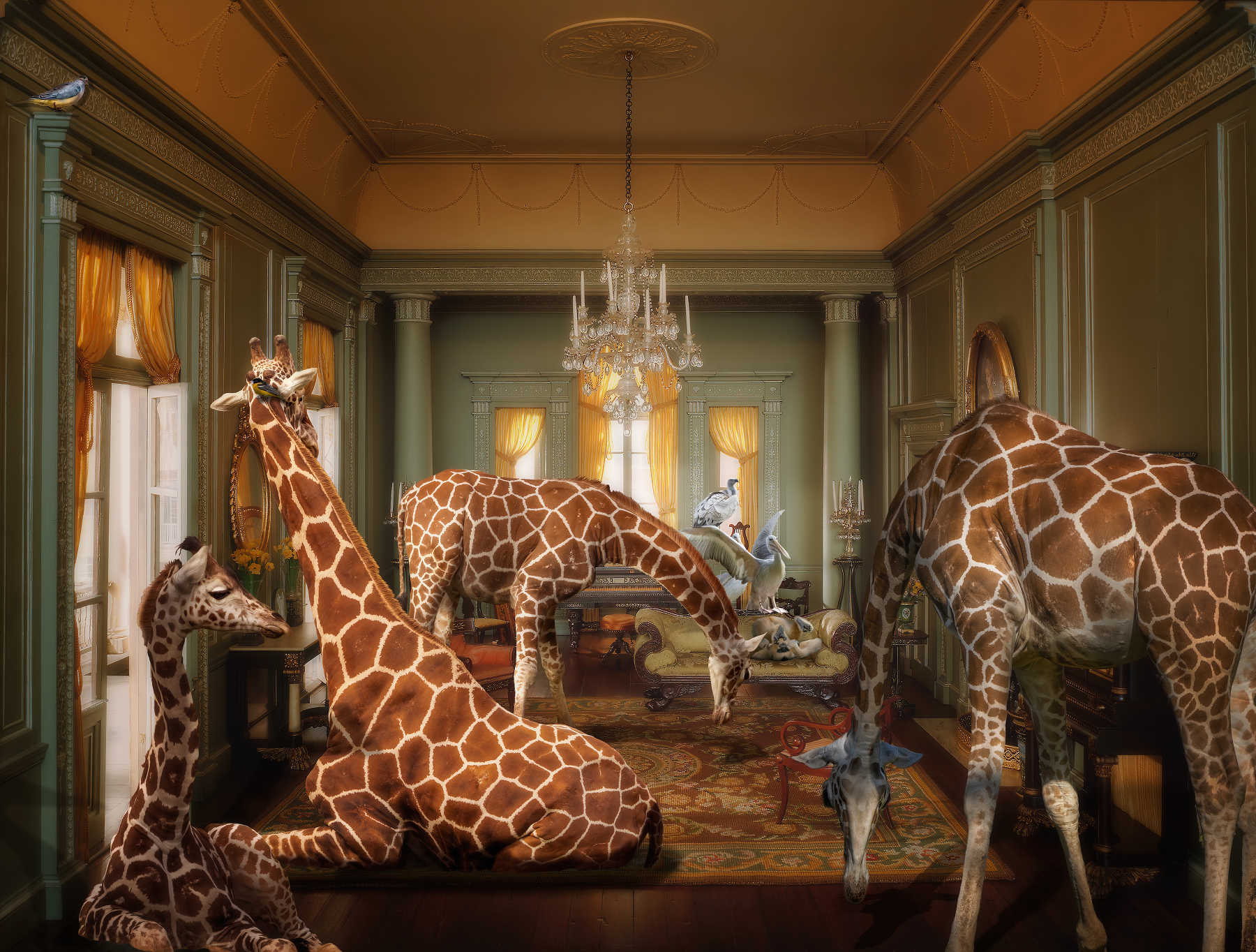 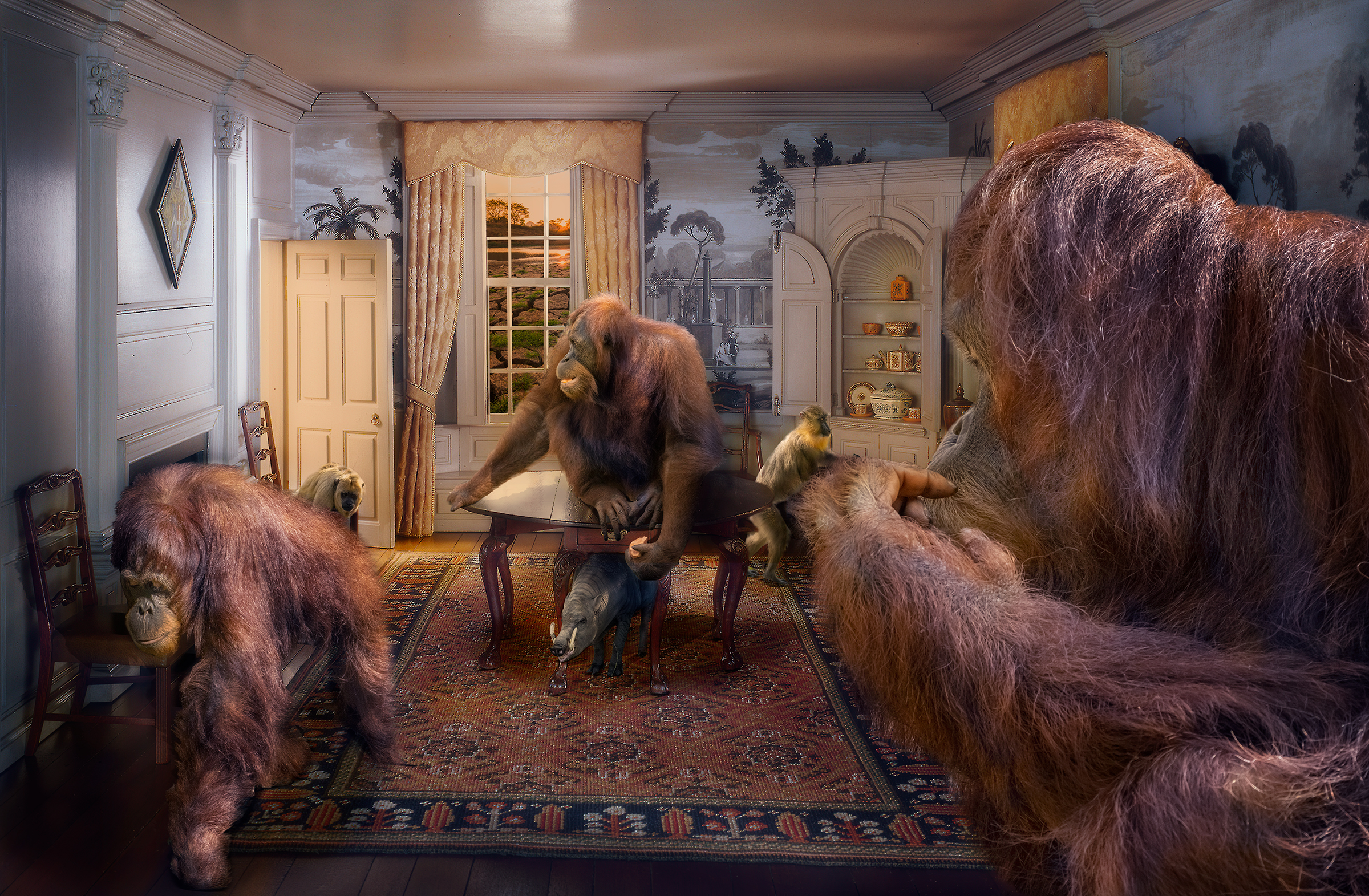 Beginning in November 2020 I traveled to 15 zoos to photograph animals in captivity with the plan of “staging” them inside the Thorne Miniature Rooms as updated natural history dioramas. This project was funded by a Sony Alpha Female+ grant.

“Captive Splendor” was created during a period in history when a global pandemic, environmental disasters, and social unrest forever altered our sense of home, health, and safety. The country was partially “locked-down” throughout the period this project was made, creating layers of meaning and unexpected narratives.

Like a cast of characters in a one-room drama, the animals interact with Mrs. Thorne’s domestic verisimilitude in ways more characteristic of humans. Part dollhouse, part theatrical set, part tableaux, the reimagined rooms juxtapose the wild with the cultivated using digital taxidermy and contemporary discomfort.

As our lives were miniaturized, so too, are the animals’ lives that I photographed.They are used as paper dolls, pasted and posed—stand-ins for humans, fixed in bygone days and controlled by human impulses.

“Captive Splendor” includes 31 of the Thorne Miniature Rooms. Over 150 species of animals are featured, the majority of which have a conservation status of “near threatened” to “critically endangered.”

I visited some of the most forward thinking zoos in America hoping to find clarity for myself about whether zoos needed to be at least partially relegated to a less enlightened era. I wrestled with my ambivalence and lack of educated wisdom. I put that conflict aside, focusing instead on my project goal of imagining and endowing the “captives” with a life beyond their cages where power and independence have been returned to them and a new narrative is written. I wanted to invite the viewer into interiors that foregrounded this complex relationship and reveal the captivity we have shared.

“Captive Splendor” also had the goal of interpreting this strange exigency of COVID-era containments and curtailments. COVID brought a disorienting narrowness into our lives for months which culturally seemed not unlike the imposed barriers that challenge wild animals’ quality of life in captivity. Expanded narrative questions filtered into my process.
Are the animals performing for our pleasure? Have the humans disappeared into apocalyptic dust? Is this an insurrection? Have they turned against us—payback a long time coming for abuses too numerous to count? No longer “cooped up” in steel-barred cages or behind concrete moats, I wanted to show them free, and moving in.

I travelled and lived in a van outfitted with enough electrical sources to power my equipment. In order to reduce health risk I chose to only photograph animals that were in outdoor exhibits. I took photos of whatever animals were available during the window of time I was present for, then moved on.

Because of closures and new rules, I was unable to actually photograph the Thorne Rooms at the Art Institute of Chicago. I adapted low-res jpgs that were available (with a Creative Commons Zero designation). Although perfect for website use, they were not remotely at home with composited photos taken with a high resolution camera. What I appreciated about them was that they were all taken straight-on, emphasizing the connection to a proscenium theatrical set. I would not have been able to create those photos without tripods and with the glass and framing still in place. I decided to take up the low-res challenge.

I used Topaz Gigapixel AI, DeNoise AI and DXO Color Efex Pro to enlarge the .jpgs, soften their digital noise, and create painterly atmosphere. I culled through thousands of photographs that I had taken to find ones that could work perspectively. They were then cut-out and turned into Photoshop masks. Many layers of adjustments were made to create a convincing scene.

Between 1932 and 1940 in Chicago, Narcissa Thorne directed the construction of over 160 intricately constructed domestic interiors spanning the 13th century to circa 1940. These miniature reproductions were built at a scale of 1:12 (one inch equals one foot). The rooms were scrupulously finished using the same materials as the full sized originals they copied. Under her auspices, at least three dozen highly skilled artisans, architects, and interior designers were hired to achieve her vision, all during the Great Depression.