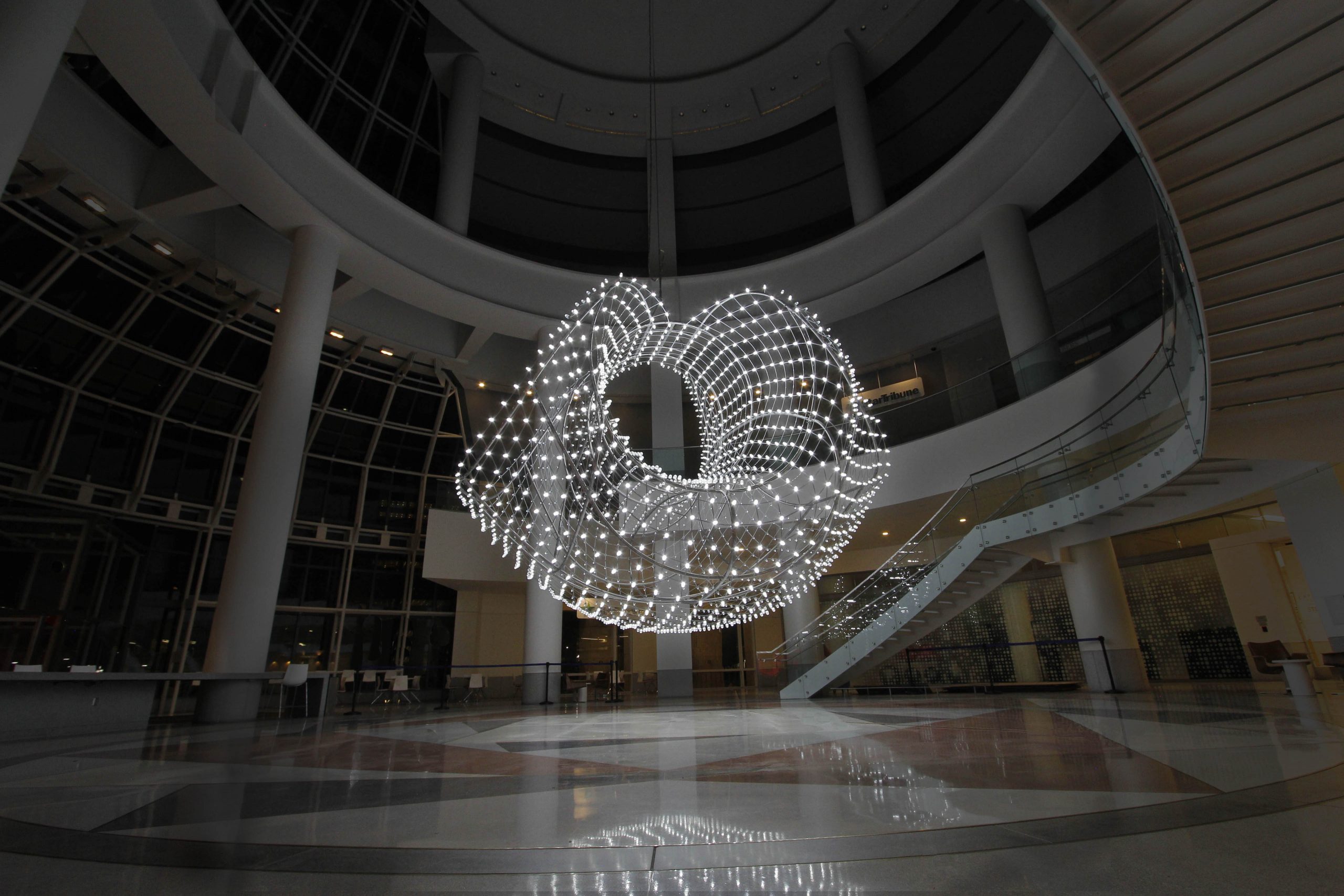 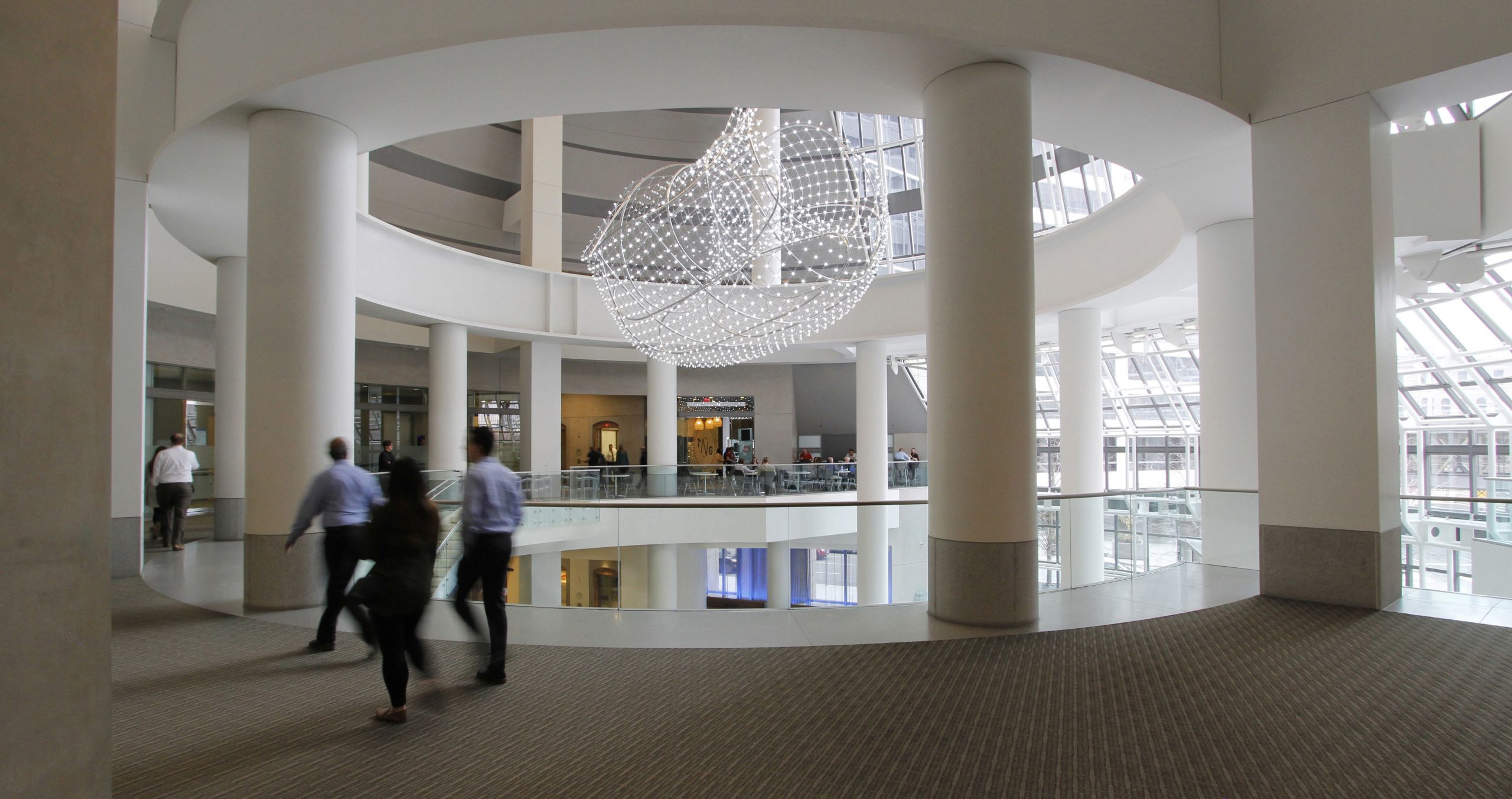 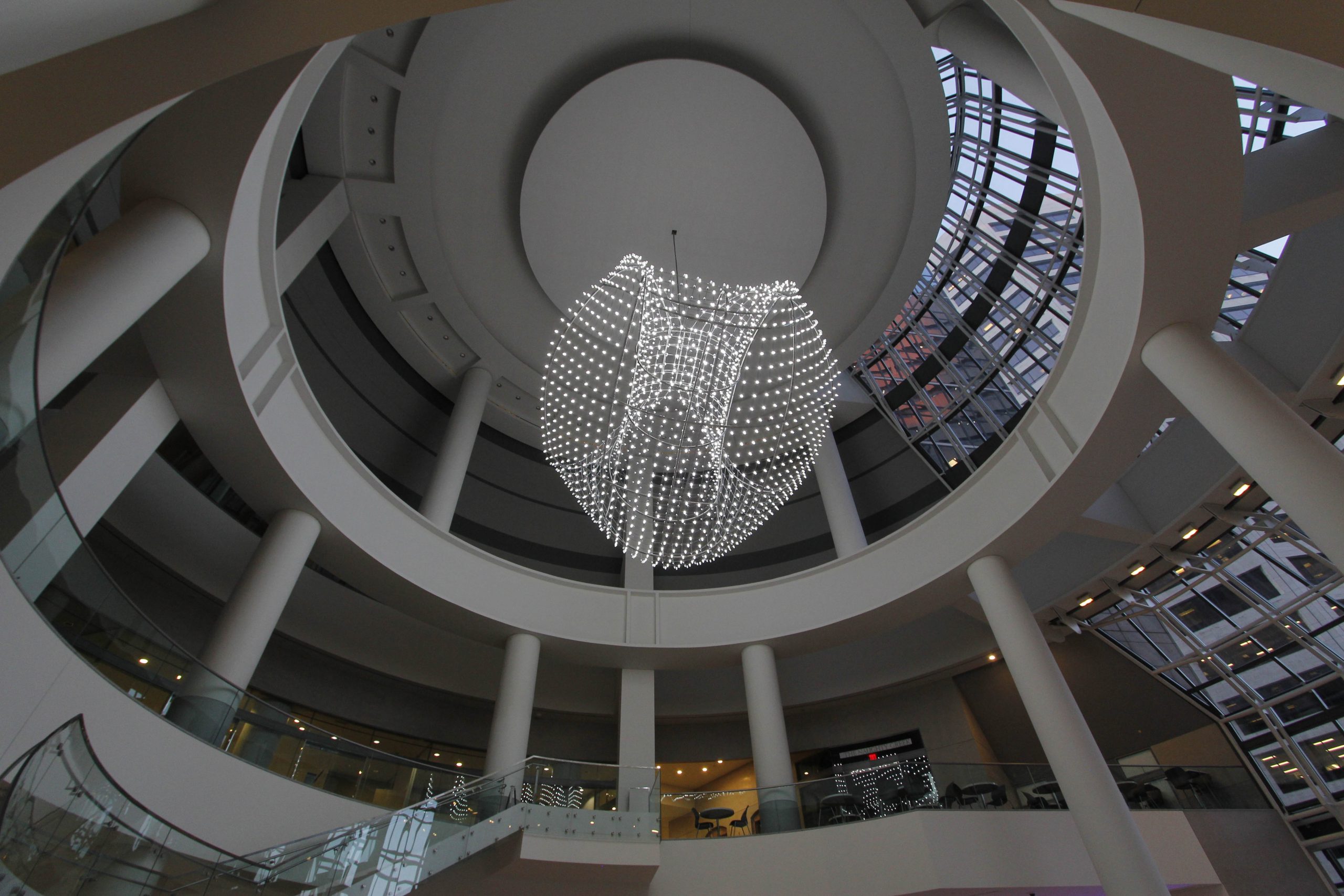 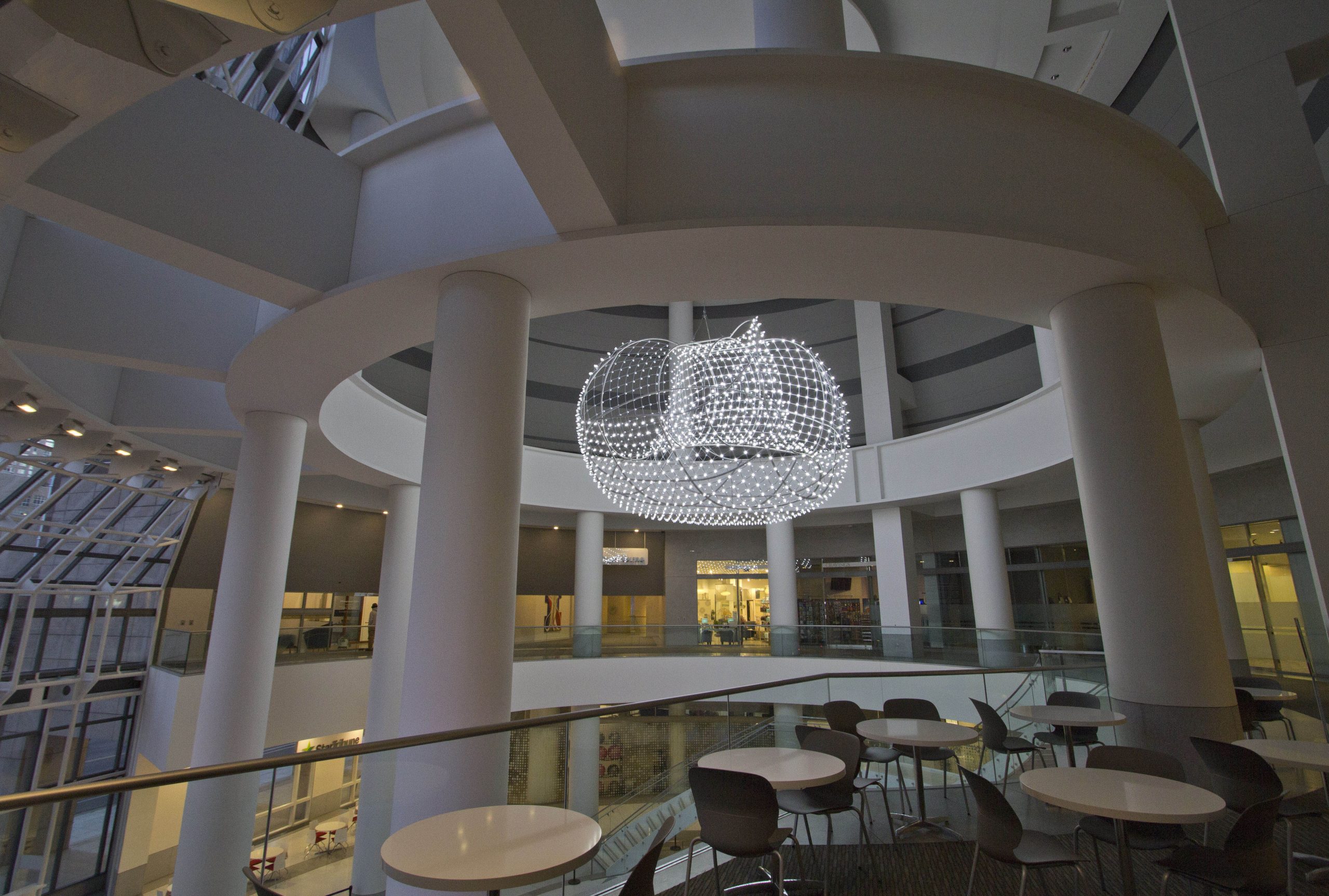 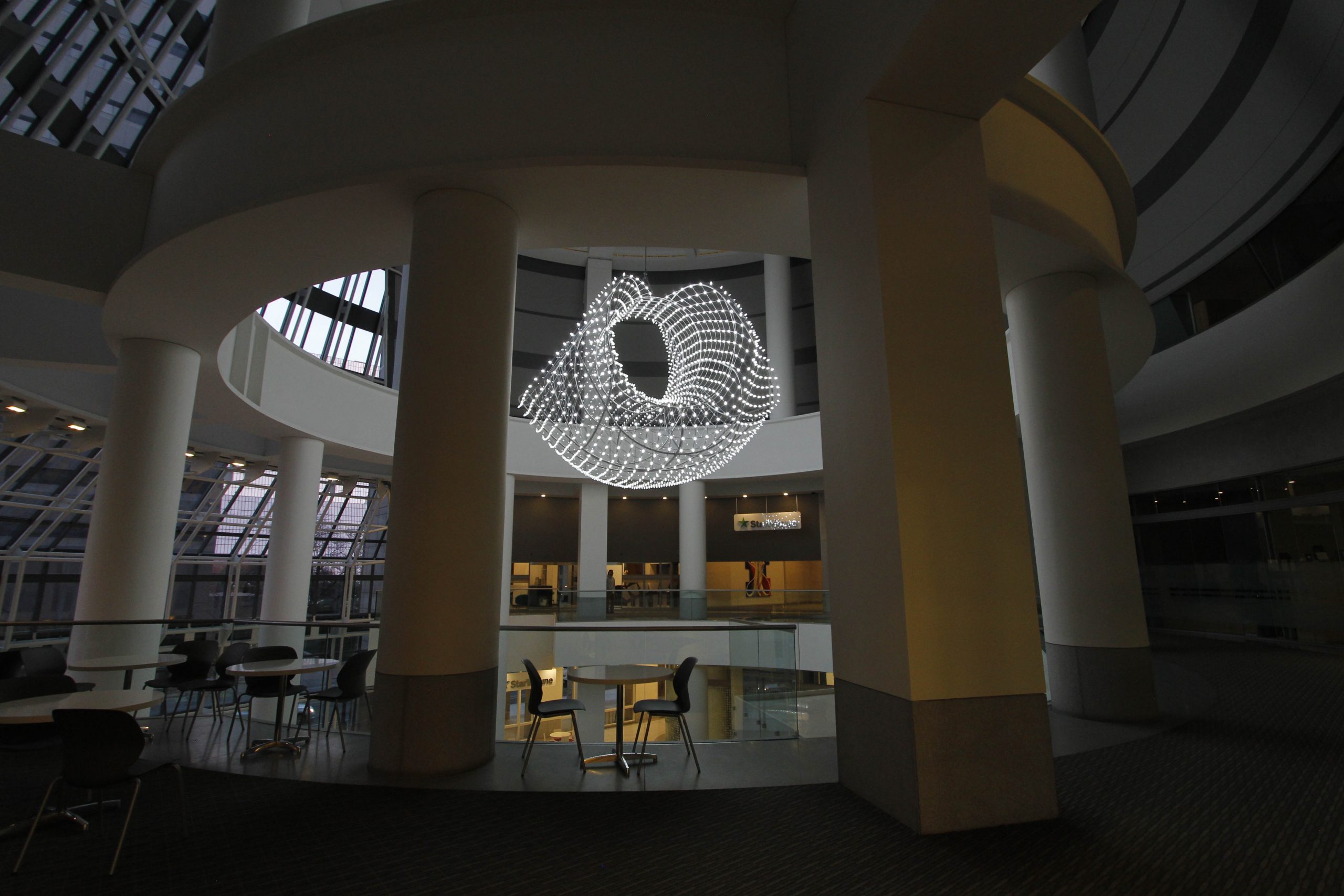 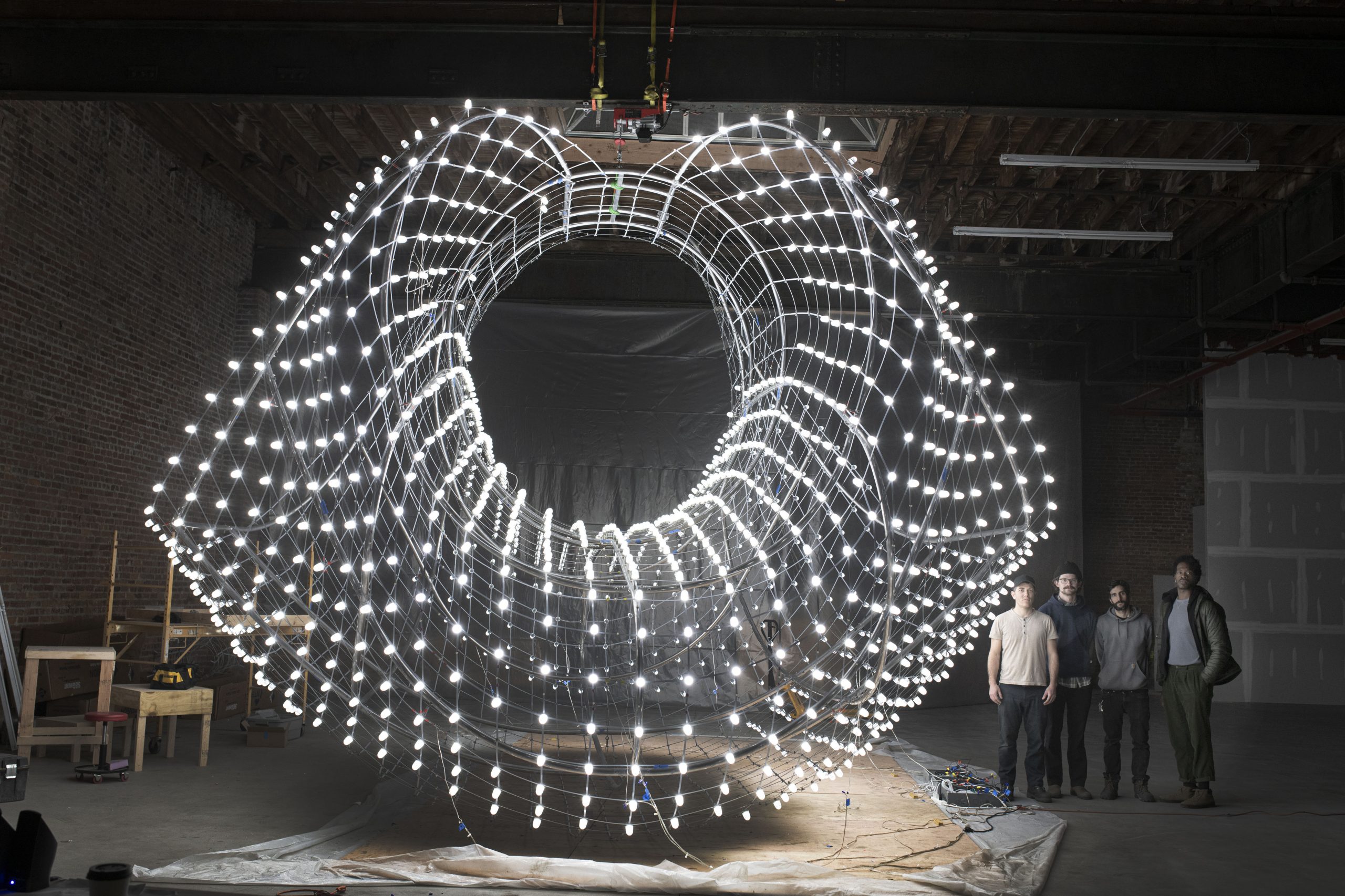 Inspired by the “wiring” of organic creatures, Jason Krugman’s Capella Basket sculpture uses a new electrical medium to rout energy through space. The sculpture is a centerpiece for Capella Tower, a class A office tower in downtown Minneapolis. From its hang-point 70-ft in the air, the artwork floats centrally in the large glass-walled atrium. Viewers are able to get a 270 degree view from the mezzanine and peer straight up and through from the floor below.

Although massive in its dimensions of 22’ x 22’ x 17’, the artwork is mostly empty space. Its primarily constructed from fiberglass circuit boards designed around a patented three-layer circuit connector. This unique circuit system uses concentric circles of gold-plated copper pressed against one another to create stable, multi-faceted electrical connections. Over ten thousand boards are connected to form one, giant, electrical circuit. Low voltage power flows through the sculpture’s surface to the main attraction: 2000 custom 2” LED lights Krugman designed specifically for this project. The intricate grid of lights describes a rolling toroidal form that transitions from a flat surface at its lowest point to a full tube at its top.

Designing a new interior for the public rotunda at for Capella Tower revolved around improving the design on both floors, as well as dynamically activating the massive volume of space with a compelling artwork. The client, Shorenstein Properties, collaborated with the architect, Shea Design, to create a vision for the new space that included a massively scaled up version of Jason Krugman’s original Basket artwork. The dynamic rolling form and airiness of the Krugman’s original table-sized sculpture were rendered into the space to create a compelling likeness of the proposed large-scale version of the Basket. In designing the new Basket and its placement within the space, special attention was paid to the sight lines of the highly-symmetry lobby created by renowned architects, Pei Cobb Fried. The multiple symmetries of the Basket artwork were aligned with key vantage points within the space, creating special viewpoints to frame the artwork and use the space as a minimal, largely uninterrupted canvas.

To create the sculpture’s unique shape a rectangular sheet of circuit boards was meticulously assembled into a 1000-square-foot mesh using small hand tools. A team of 6 fabricators worked in co-ordination with a digital engineer to create the templates and drawings to aid in the assembly process. The mesh was then carefully mounted onto a minimal aluminum frame, much like the hull of a ship. The resulting shape resembles a diatomaceous skeleton or a roiling smoke ring. During assembly, Krugman’s team developed a technique for viewing the sculpture with a thermal camera to locate and eliminate any short-circuits caused by misplaced or damaged circuitboards. This innovation and tool-making ability has been crucial to Krugman Studio’s ability to take on the complex design challenges in working with electricity as a medium. This sculpture’s frame and rigging were analyzed by Arup engineers and certified to comply with the applicable UL standards by Intertek.

Capella Basket is a 10-times scale version of an original 2ft-diameter Basket sculpture the artist developed in 2009. Krugman has been exploring electrical meshes and novel building techniques since. Nearly every project presents fascinating electrical and geometric problems. Often, the solution involves inventing new tools and jigs to insure everything lines up and elegantly connects. His ongoing goal is to allow the multitude of lights to float softly in space, describing a form but without the distraction heavy structure or obtrusive wiring. Like much of Krugman’s body of work, the medium is as much the artwork as its final form. Taking artistic cues from natural forms provides Krugman’s work with a unity of design rooted in the minimalist efficiency of natural objects.