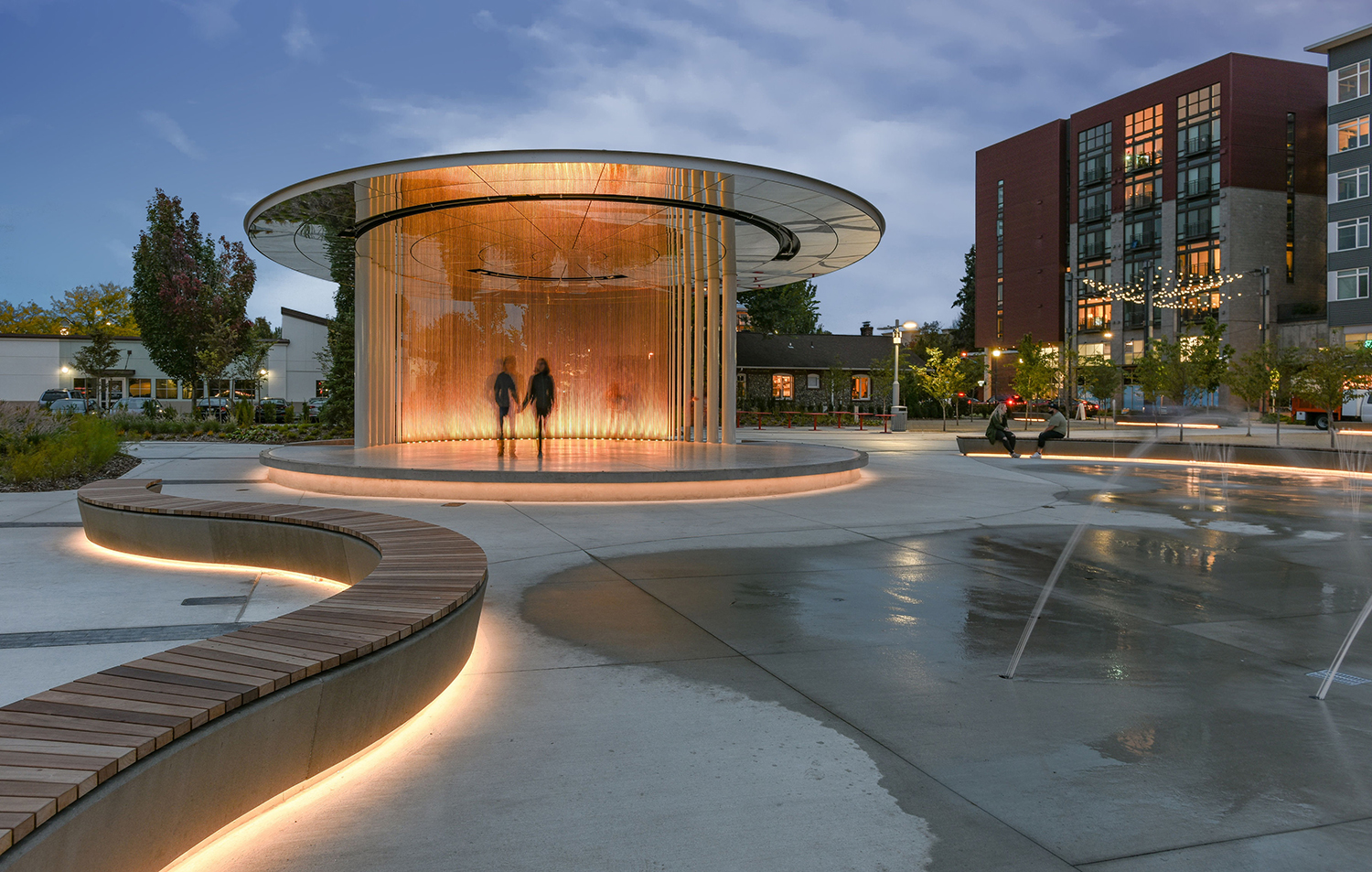 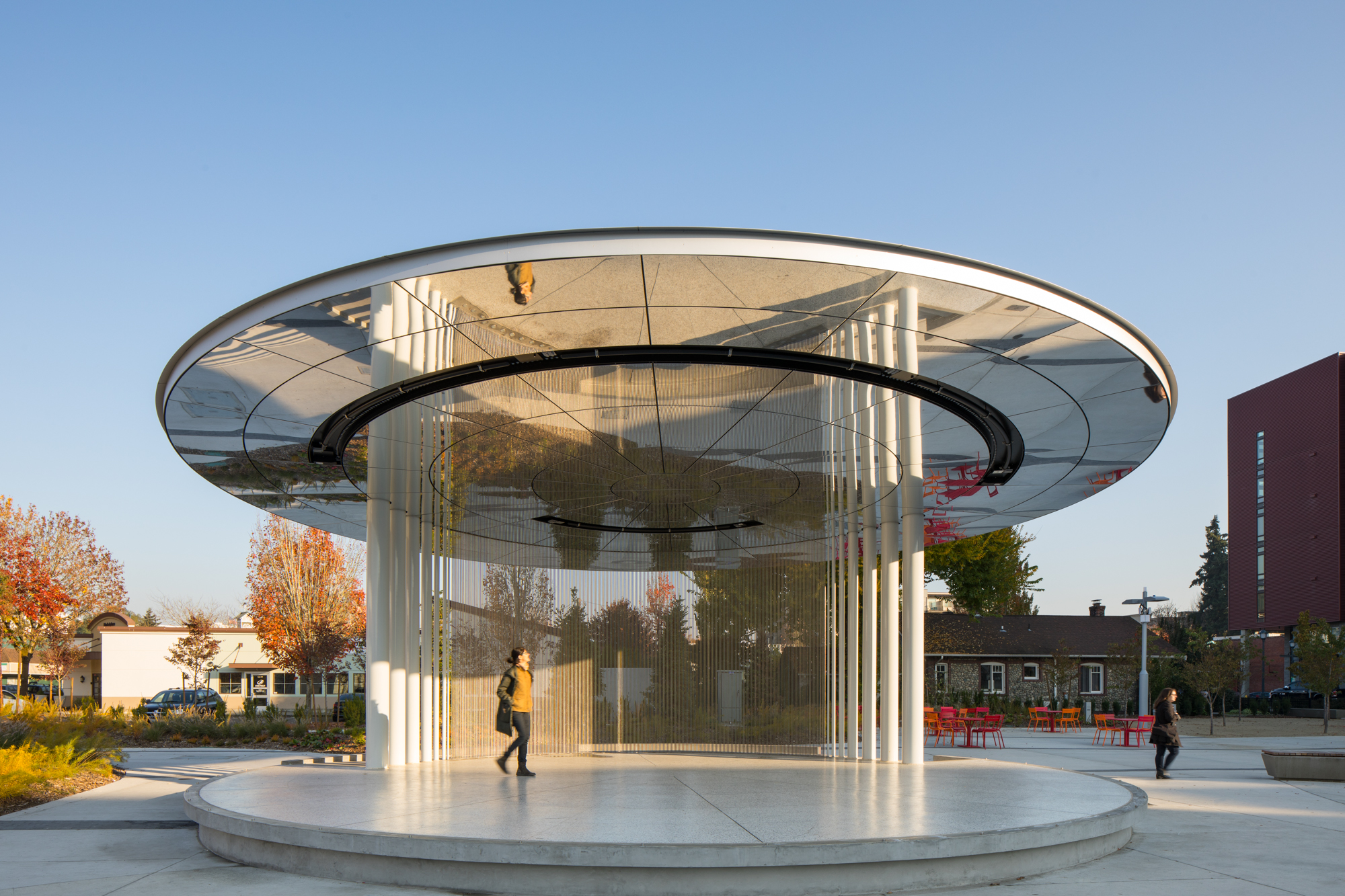 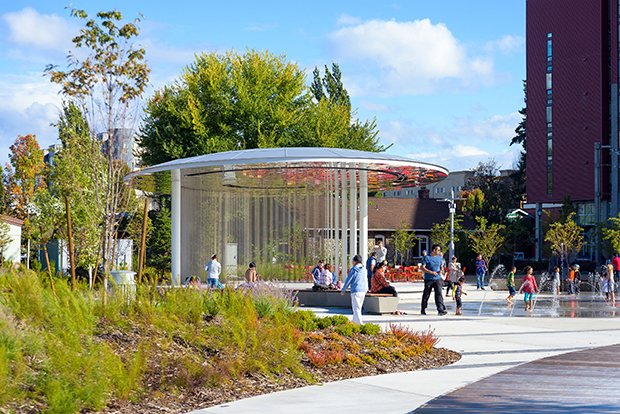 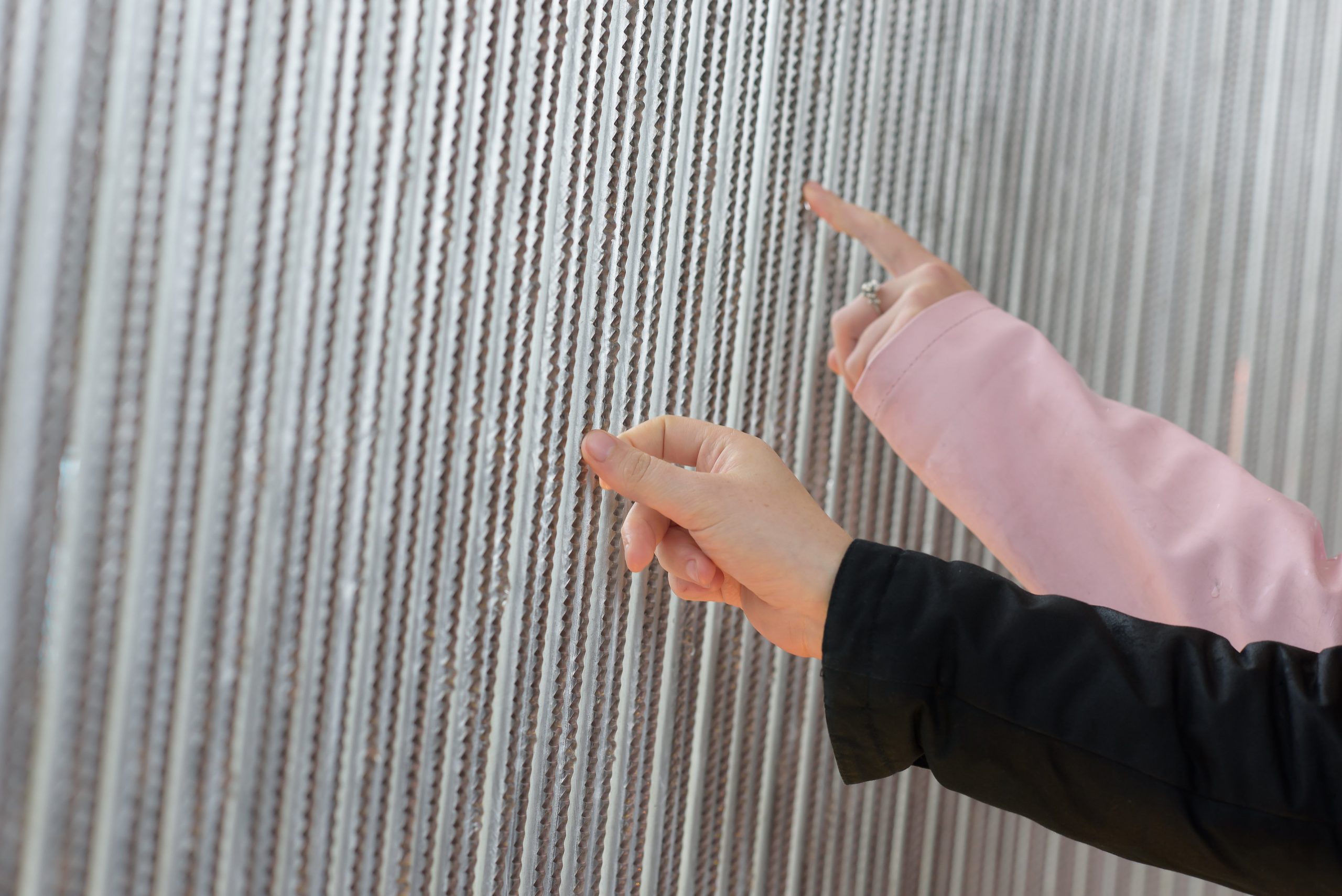 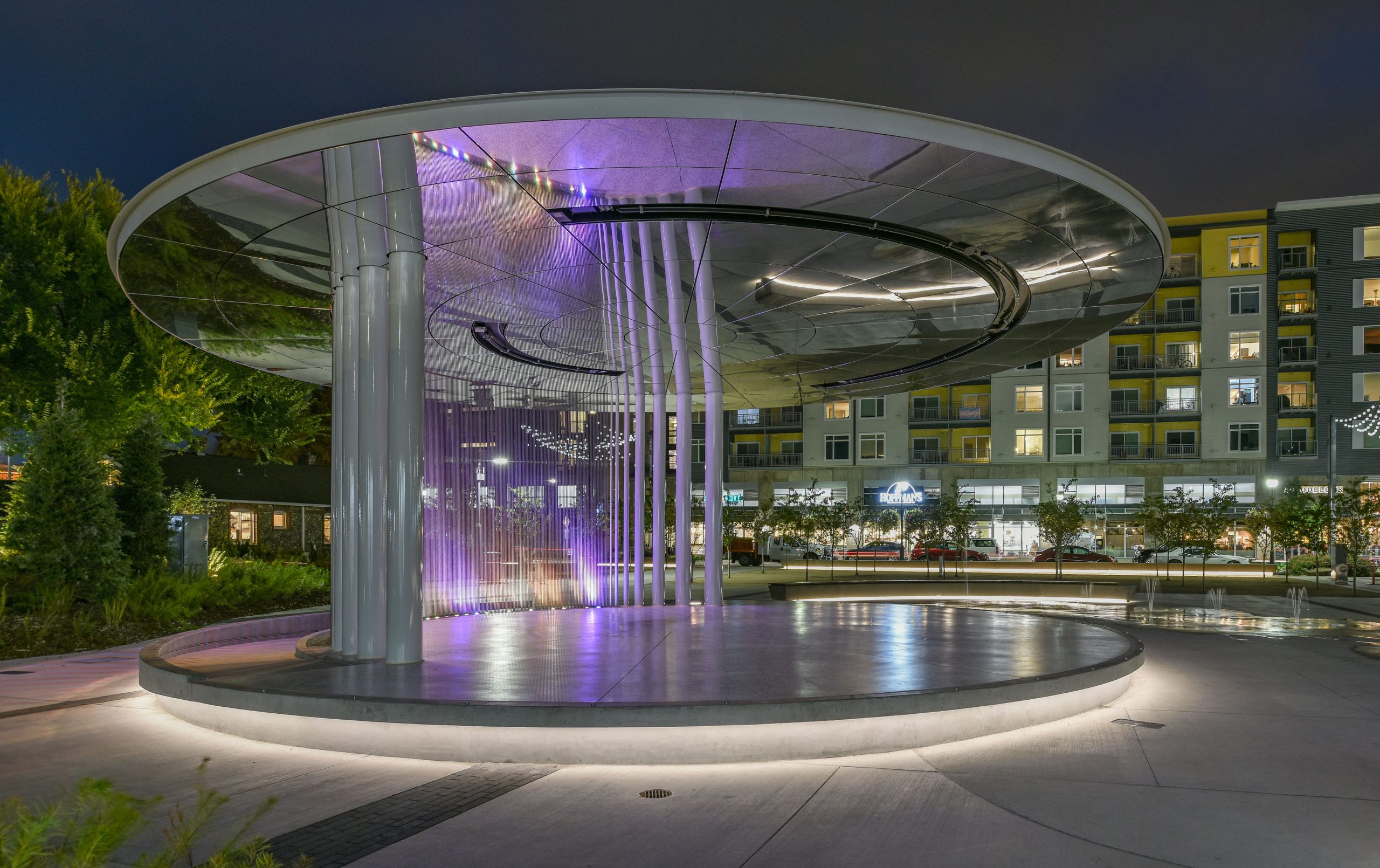 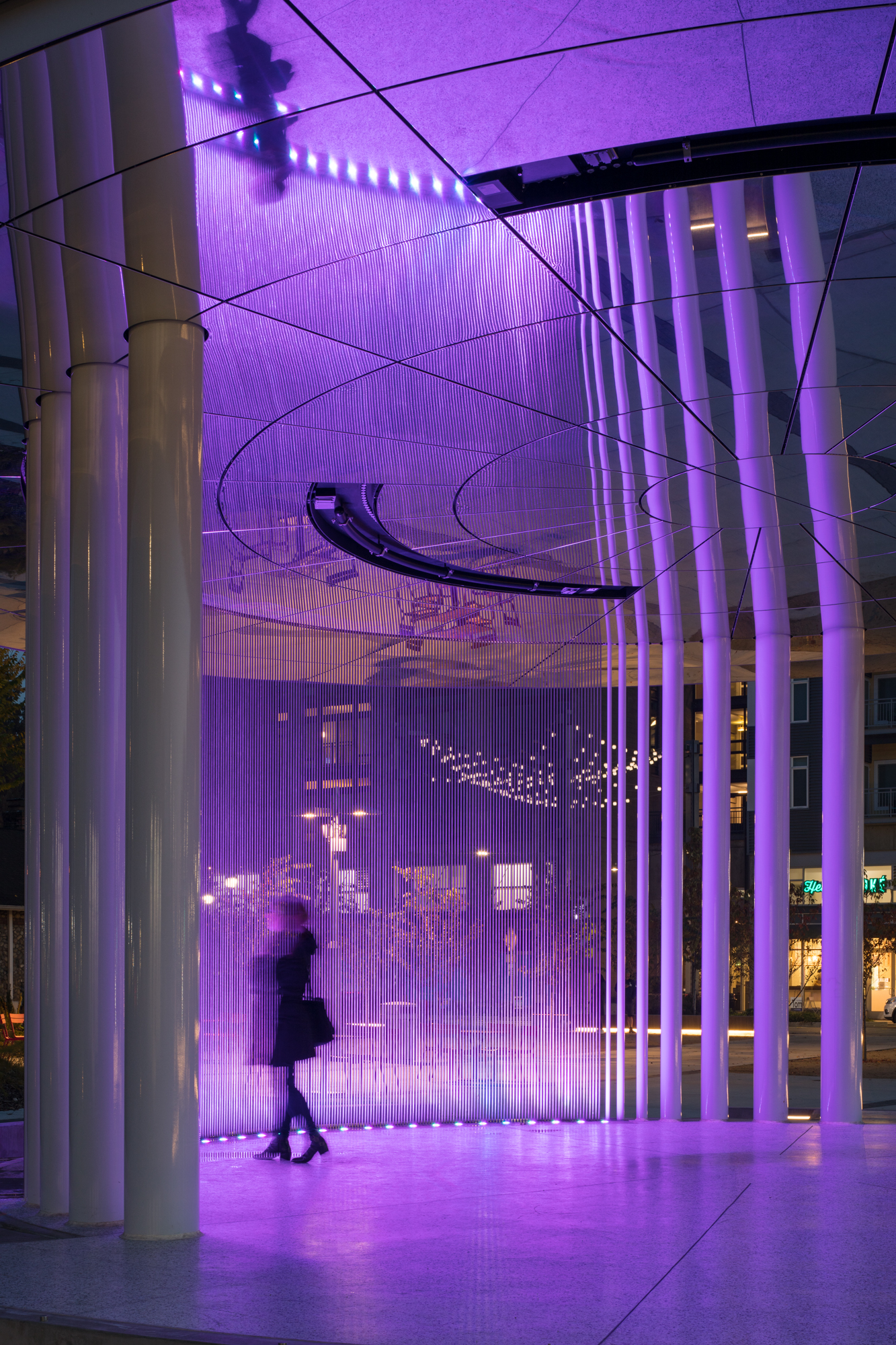 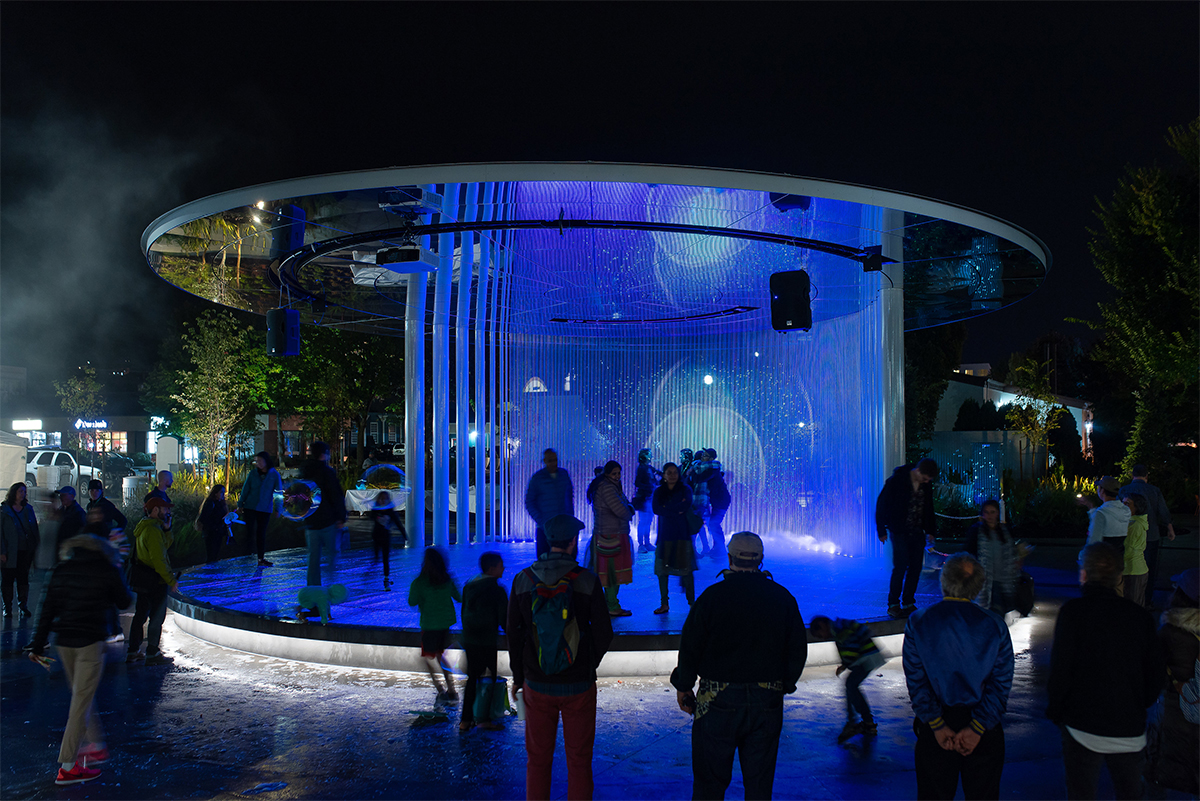 Buoyant is a signature artwork in a civic park which acts simultaneously as a pavilion, a dynamic water feature, and a platform for light, digital projection and performance. Water travels down an array of tiny grooved structural rods at the back of the sculpture, its dynamic flow controlled through meniscal tension. A giant mirrored disc appears to float on this medium of water, reflecting and expanding the activities and surroundings below. At night, the water wall transforms into a canvas for colored LED light display and projected digital imagery allowing for its ongoing transformation and activation.

An extensive public engagement strategy informed the design for a two acre park that will act as the central gathering place for Downtown Redmond. The park was designed to be highly flexible, providing 365 – day use, and venues suited to a wide range of more unique event programming. Inspired by the historic peat bogs that once occupied the site, the design reasserts the hummocky and organic over the rectilinear ‘urban grid’. Two circular zones encompass the site – an elevated Great Lawn, ringed by an illuminated wood boardwalk, and a multi-use plaza delineated by the integrated sculptural circular artwork entitled Buoyant. The goal for Buoyant was that it become the significant artistic feature in the park: an inhabitable sculpture that could combine the natural element of water with the ubiquitous presence of digital media found throughout the many technology companies and educational institutions located in Redmond. The other goal for the artwork was that it not be static, but rather be able to continually transform day and night and through the seasons and years, allowing for the work to continually draw people into the park to explore and engage with it.

This was an incredibly complex project involving the collaboration of many different people including landscape architects, architects, engineers, fabricators, water mechanical specialists and lighting designers as well as the City and the public, with us the artist over the course of multiple years. Numerous meetings and workshops throughout the process ensured that the project vision and values infused the work of every component, and also satisfied the goals of the city and the public. We worked closely with the landscape architecture team to integrate Buoyant into the park spaces and infrastructure, looking at how it would function both day and night as a cultural anchor for the park. We collaborated with technology and educational institutions throughout Redmond to ensure that we designed the work such that it could become a viable canvas for light and future digital projection works. The design of the water wall was a particularly complex element that involved an integrated process of sketching, drawing, three-dimensional modelling and hands on prototyping and testing in order to create a wall of 185 tiny structural rods that together could support a giant cantilevered ceiling as well as hold dynamic water flow along their surface.

Buoyant has been a huge success. We have heard nothing but rave reviews about the work and its role in activating the park and downtown Redmond. Since the park opened, many new businesses have moved into the area and residential development continues to thrive. Buoyant has already been activated with digital projection artworks by other artists as well utilized for many performances and community park events. On a daily basis, kids and adults interact with the flowing water wall, lying on the floor to see water, themselves, the park and others reflected in its mirror ceiling