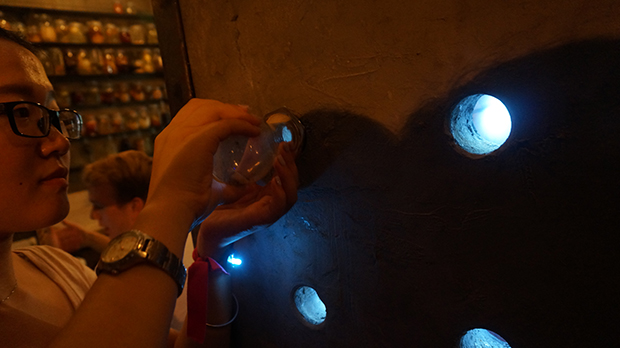 The installation is composed by a concrete wall of 2 sides activated. On one side is the LED lighting gradient from blue to pink, indicating an emotional chart where visitors can put a bulb in the chart according to their emotions. On the other side of the wall, colorful dough is arranged in the grid, where visitors can interact closely and make a new shape of the the wall.

“Where do people gather”, “What brings people together”, “What do people do when they get together”, “Will people change their decision in a group”, those are the questions that gave a birth of the installation. We all live in the world constructed by dynamic behaviors. Sometimes, what we think triggers what we do. Sometimes, it works in the opposite way. To figure out the mind trace of behavior is the entry point to the thinking about the intertwined relationship of behavior and emotion. The installation is built to capture the intersection between decision making and action taking. By amplifying the progress and adding extra steps of regular behavior, the moment of “doing” is visualized by the wall of bulbs and the new terrain of reinforcement.

The installation and the whole interactive progress took place in a historical Shanghai Lilong residential district. According to the new urban design policy, some of the parcels were being taken done for mixed uses. The art space DALIAH is one of the early stage programs that inserted into the area to bring new life to the city. On top of the layer of urban memory, the project aimed to activate new understanding of connection between individuals and re-imagine an awareness of the power of individual as individual, and individuals as a group.