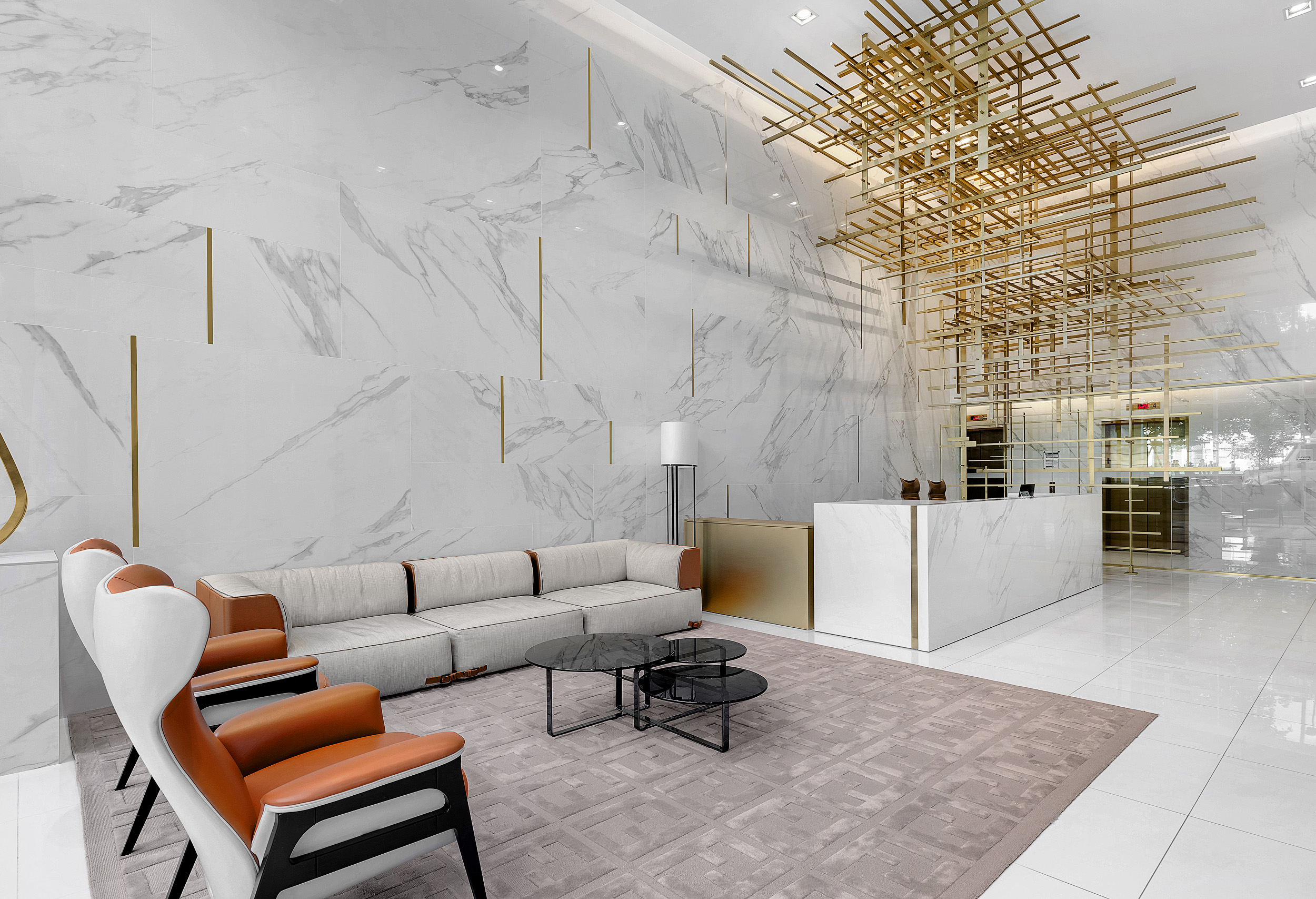 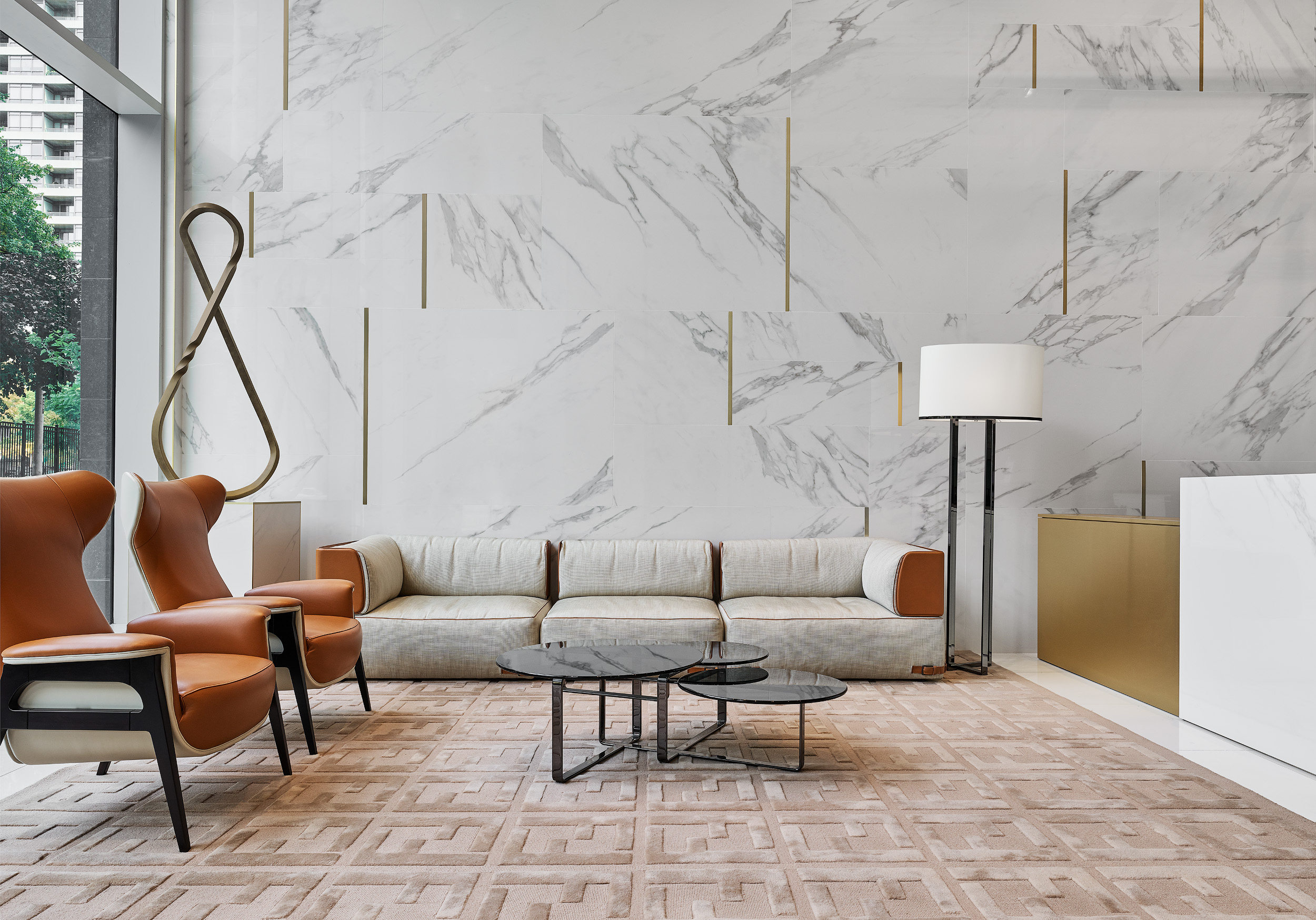 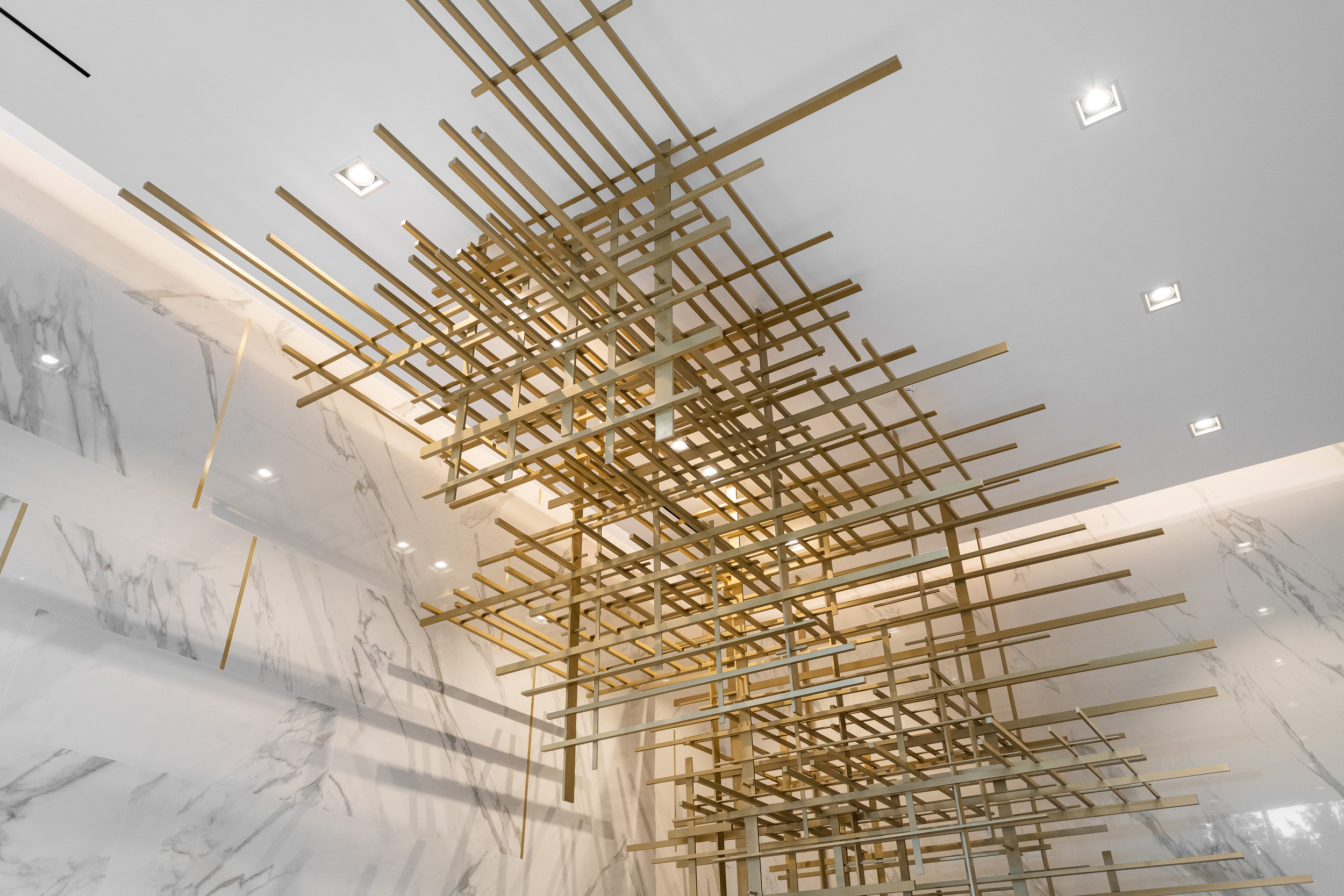 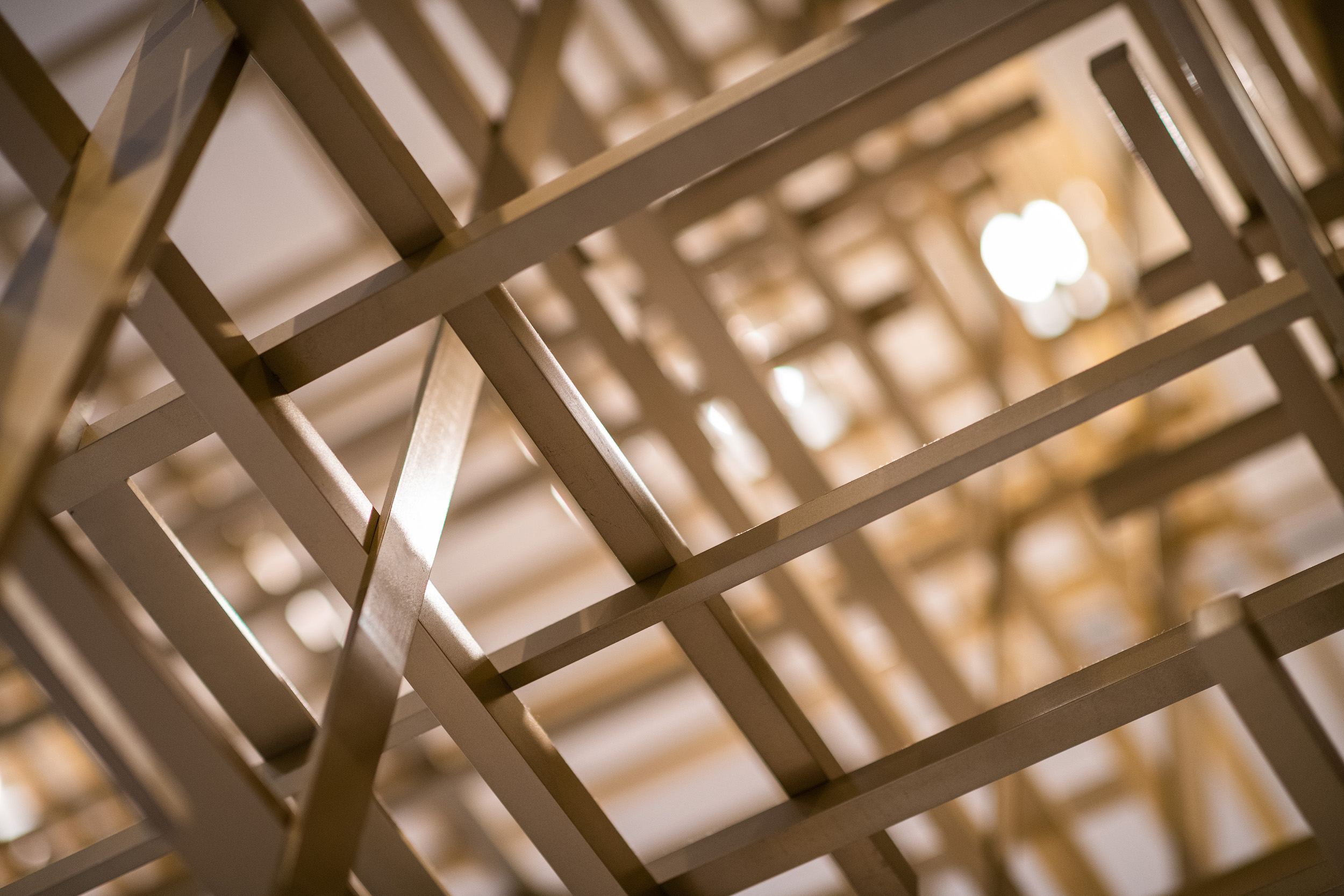 With a narrow, tall lobby at the new condo 411 Church in Toronto, Figure3 wanted to activate the volume of negative space with a beautiful custom ceiling sculpture to draw the attention of visitors and passersby, and to evoke a feeling of wonder.

The concept of a bird’s nest was decided upon, a geometric yet organic and artful sculpture with intertwined rods expressing movement.

With elegance and luxury top of mind, no welds, seams or fastening screws were to be visible, however, which was quite a challenge. Taking advantage of the sharp, crisp edges that can be created in a mill, solid aluminum bars were chosen as the material, consisting of square, flat and rectangular shapes. The challenge was solved by creating round aluminum dowel pins to provide the connections required, utilizing hilti epoxy to hold the sculpture’s pieces together.

Suspended over the reception desk, the beautiful sculpture completes the space, accenting the height of the lobby. Viewed from the double story window outside, or inside the space, this one-of-a-kind art piece dazzles.

The first residential building signaling a major shift taking place on Church St. in Toronto, the interior design for 411 Church brings an upscale brand experience to the bustling Church and Wellesley neighbourhood. The developer, CentreCourt, wanted this project and its lobby experience to set the tone for its future work.

Inspiration came a few years earlier as Figure3 Principal and residential studio lead Dominic De Freitas was in Paris. Luxury retail shops such as Prada and Louis Vuitton along the Champs-Élysées all had beautiful sculptural elements in their high spaces, which evoked a powerful, emotional response.

With a ceiling height of approximately 35 feet in the 411 Church lobby, it was the perfect opportunity for Figure3 to bring this inspiration of luxury brands to the project, with a retail design approach for the lobby. White marble walls would provide an elegant backdrop, with contemporary Fendi furniture setting a sophisticated mood.

With the calm space of white marble, a luxurious gold-coloured ceiling sculpture would make for a brilliant and striking contrast. It was decided that gold accents, mirroring elements of the sculptural rods, would be inlayed within the marble, as if parts of the sculpture had been integrated into the lobby walls.

Figure3 created several iterations of the sculpture in a 3D format to understand size and proportions of the sculptural elements. The designs were then sent to the fabricator, Urban Art & Metal Works (UAMW), to determine how the imagined concept could be realized.

UAMW first had to determine the suitable sizes of the sculpture’s horizontal and vertical bars and its size within the space, based on the architectural drawings.

With the challenge of no welds, seams or fastening screws to be visible, and with important weight and cost considerations, different materials had to be evaluated before aluminum was agreed upon by all parties.

The UAMW team expertly performed trial assemblies of the sculpture at their shop, painstakingly adding each piece one at a time, even recreating the 411 Church ceiling in order to test for proportion and exact positioning, all to ensure Figure3’s vision was met.

It was an amazing collaboration in the span of a few months, a vision skillfully and creatively brought to life with a spectacular result.

Every horizontal and vertical piece was cut to size, its dowel pins hand-cut, with matching holes drilled to create a press fit for secure assembly. Utilizing their shop’s ceiling height, UAMW recreated a false wood ceiling with all of the light fixture cut-outs that existed at the 411 Church site. Doing so allowed them to start the assembly of the vertical support flat bars and spacing layout process. Due to the extreme complexity of the design and the amount of vertical and horizontal bars, the team had to build their way up and across at the same time, laying out each piece of the bar locations to its final height beginning at 27 feet. Sections were laid out to establish their final location within the sculpture. Once marked, they were removed to assemble the connecting pieces above. It took 4 skilled employees 5 weeks in the shop executing the design and assembly. With the preassembly completed and approved, they then had to disassemble each piece, engraving each piece with its connecting location. Once all bars were identified they were sent for gold powder coating. At 411 Church, it took 4 workers and 3 weeks to erect and assemble the sculpture; first securing the vertical flat bars and their connections to the ceiling, then, carefully adding each piece one at a time.