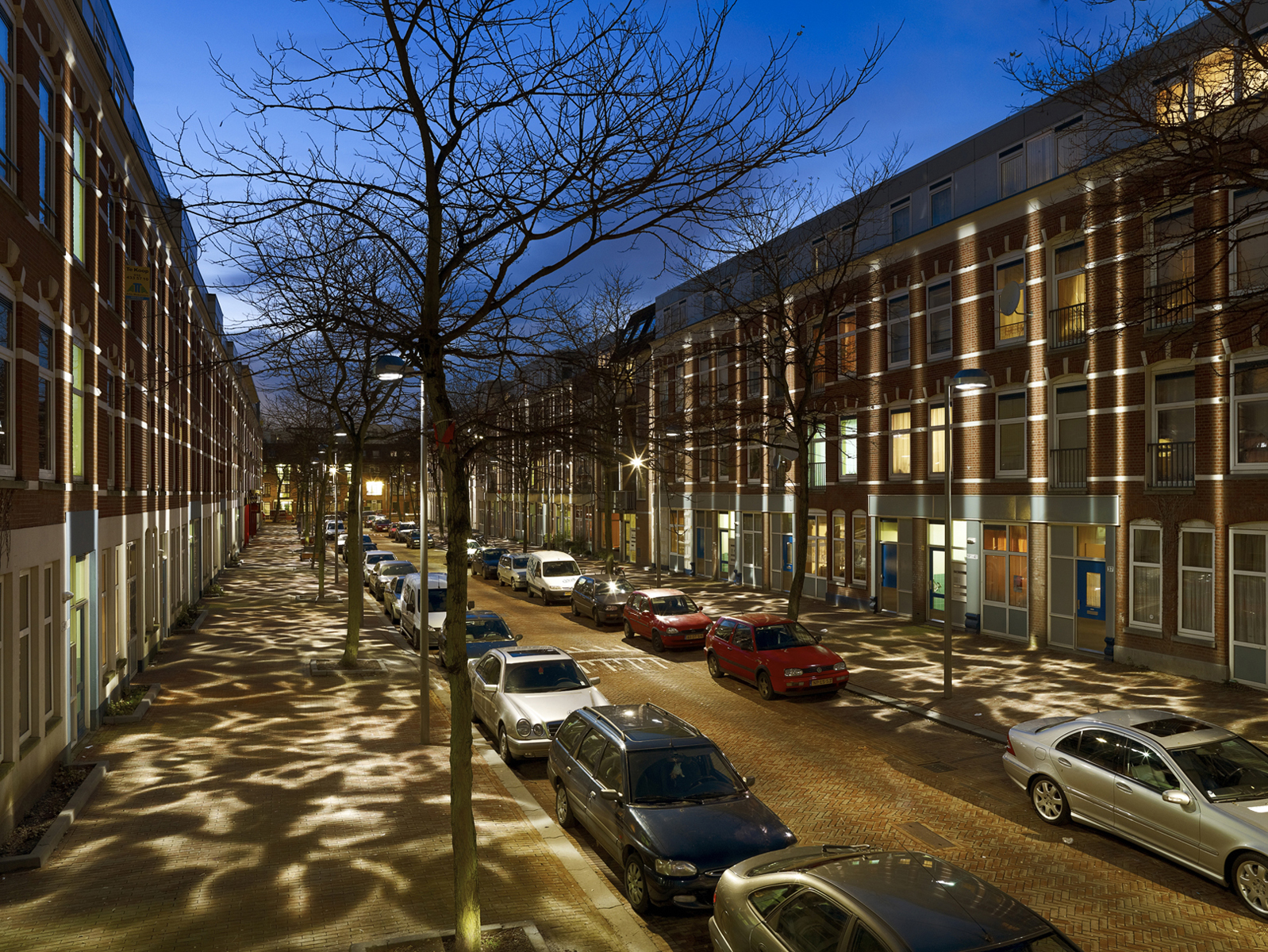 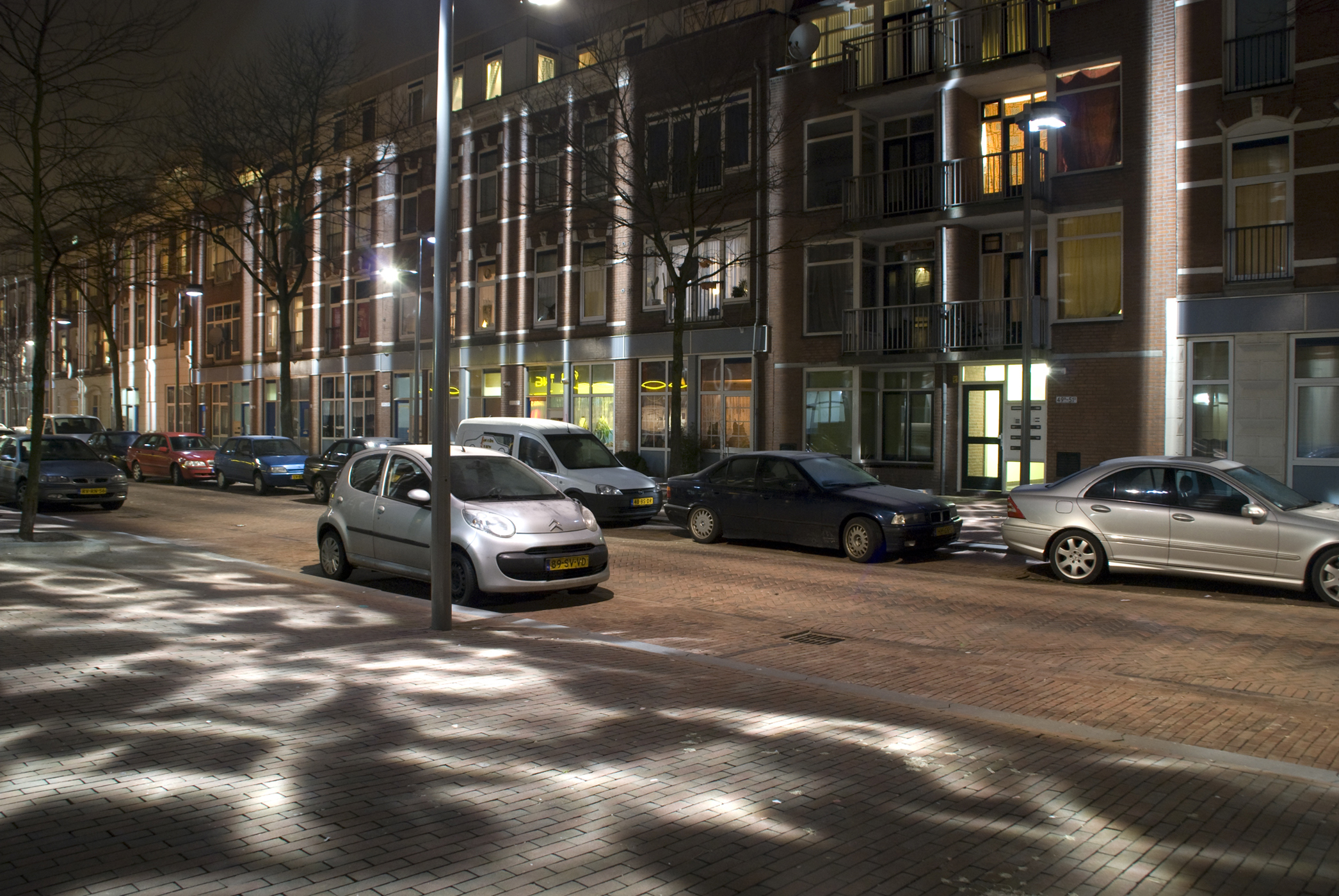 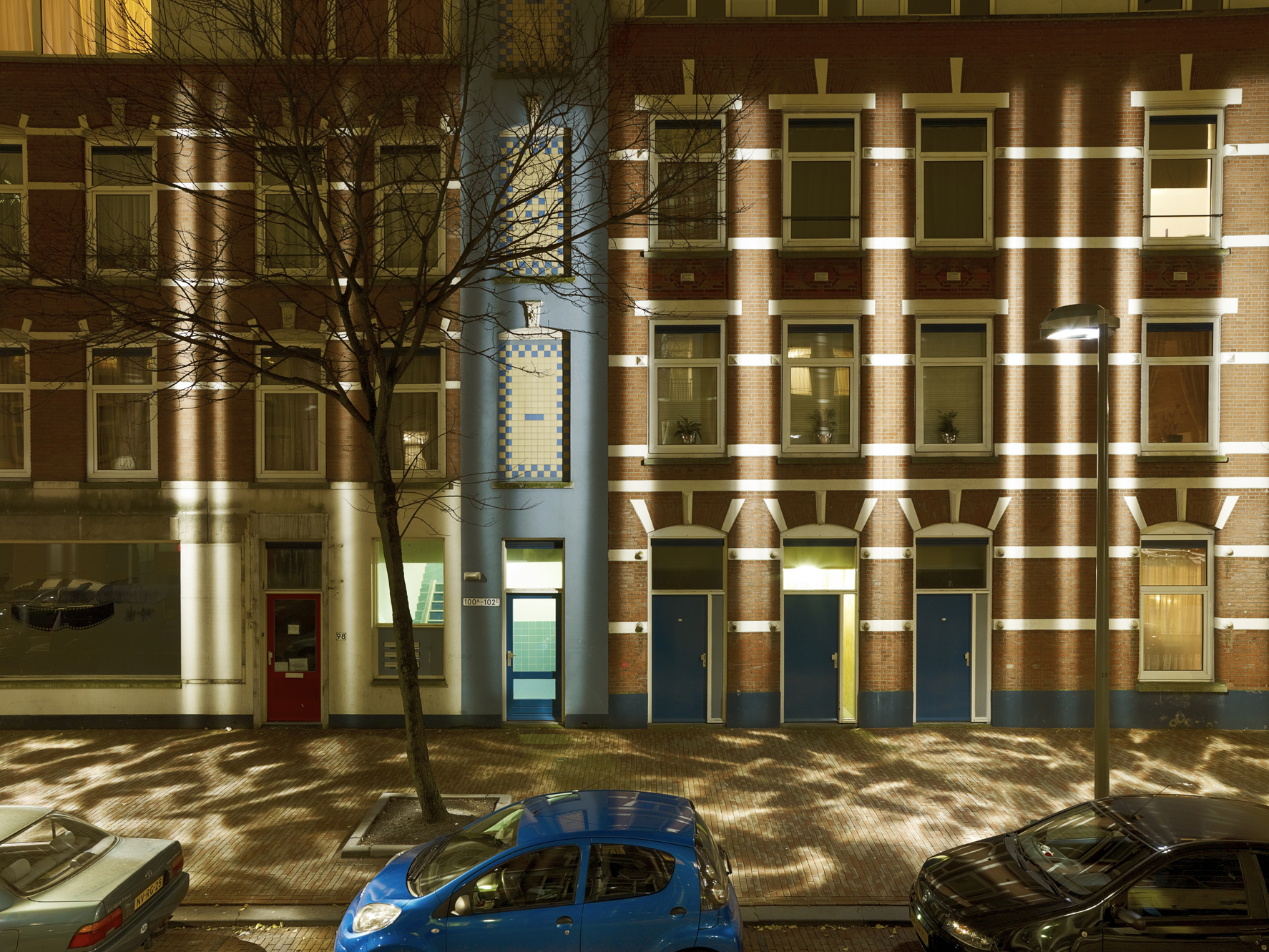 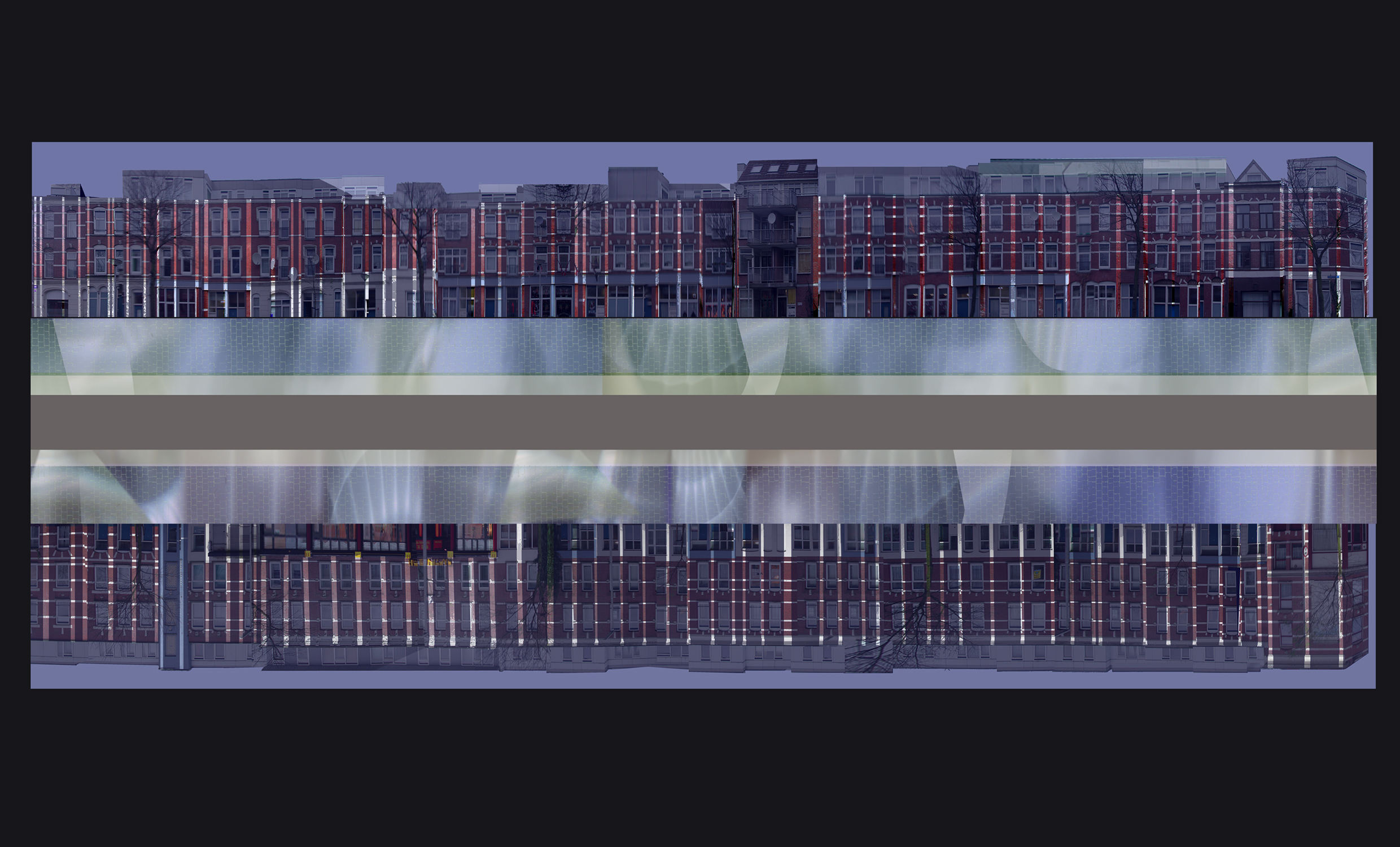 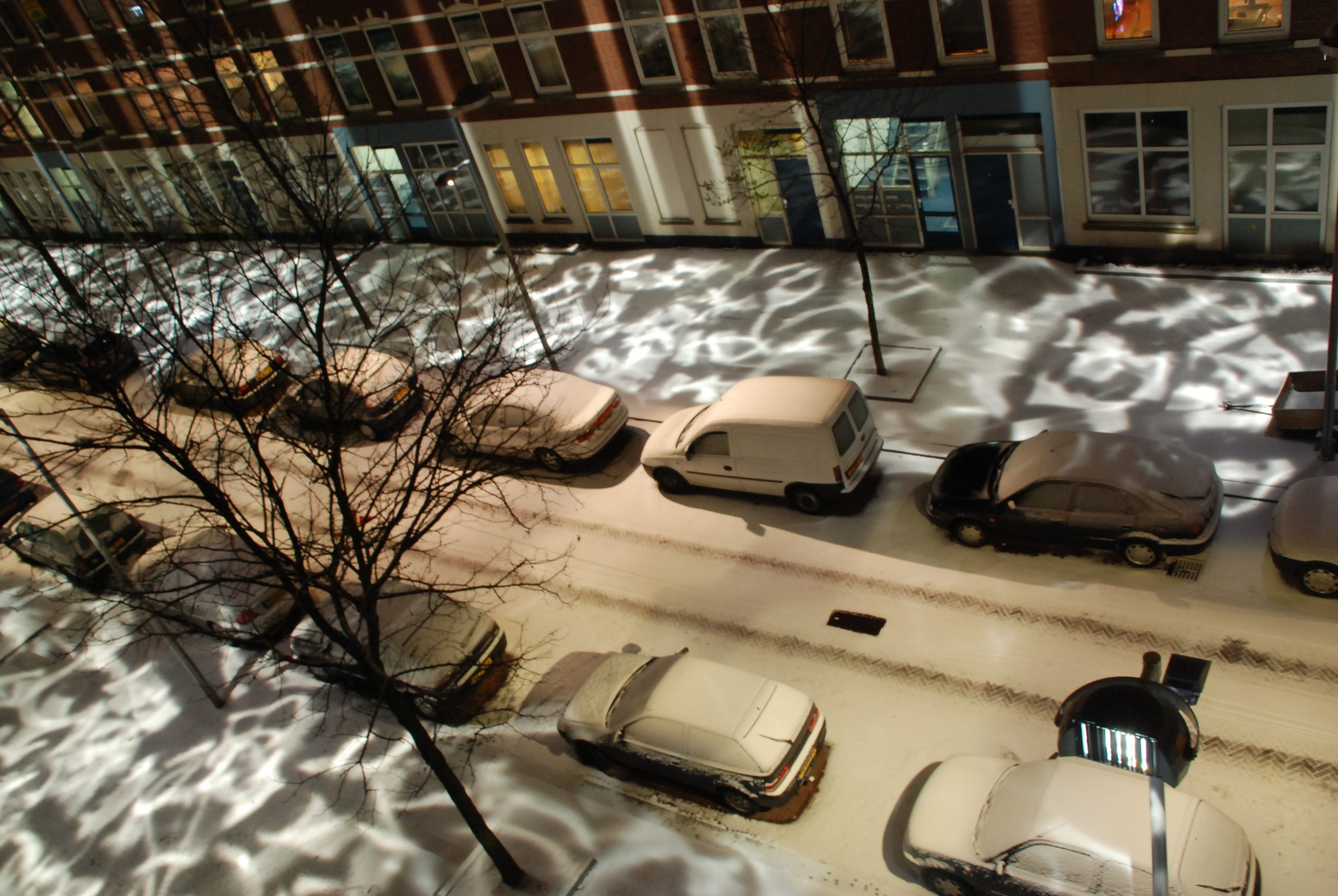 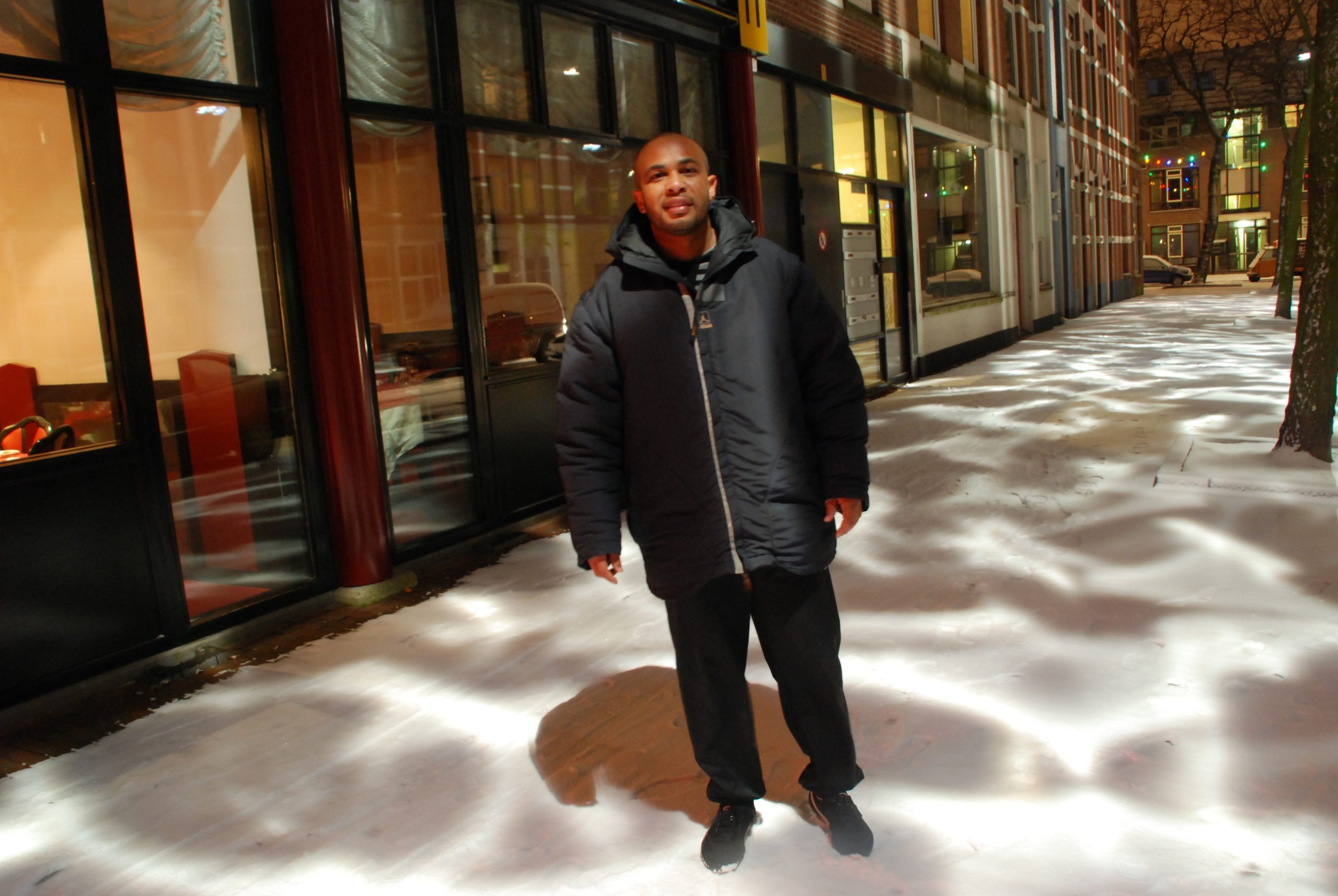 The project design includes the illumination of both horizontal (the pavement) and vertical (the facades) surfaces of the street. The vertical lines in this project resemble columns and the rhythm creates the ambience of an interior space. In addition to this, the pattern of light on the pavement produces a kind of watery but broken light effect that combines well with the static vertical effect. A new optical light system is developed particularly for this project. The vertical and horizontal projections operated in a fixture at 6 metres. This lighting project partially takes over public lighting.

Broken Light is "A social sculpture for the street's residents who welcomed a little light into their neighbourhood literally and figuratively. A street that until a few years ago was rife with crime. Prostitution was driven out in the 1980s and many renovation projects were implemented. Finally an image refers to the experience of light and dark and rejuvenation.
Visual concept: There was a desire to remove the negative qualities of street light - to avoid glare and reduce light pollution. We wanted to create a space built with light; an additional layer to the street’s daytime persona.
Art concept: Rethinking the traditional streetscape, Broken Light, has had an impact way beyond the aesthetic; the issues of crime and prostitution that used to blight the district have all but gone replaced by a strengthened sense of community. Instead of using light purely as a practical solution – providing pockets of ‘safe’ light and guarding against the ‘danger’ of darkness - we wanted to weave in a layer of identity.

This project was a collaboration between artists, designers, Urban planners, historians and fysics
It was essential that each effect luminaire was customised to precisely direct the bars of light. Using calculations for the reflectors made by Teunissen and Marinus van der Voorden,
Max Designers, developed the specialist housings. Regulations stipulated that the roadway itself had to remain evenly illuminated. To this end, fixtures were added to the roadward side of every other lamppost running down each side of the street.,

From above these broken shapes seem graffiti-like, as if light has been wildly sprayed across the sidewalk. At ground level, the pattern has been likened to abstract bird shapes and floral swirls. Indeed, playing with differing interpretations and perspectives was always an intentional part of this work, and the reaction of residents has been overwhelmingly positive. For Teunissen, it is proof that imaginative solutions can be both practical and engaging. “What we show is that you can illuminate an entire area and that you can add great contrast without visual obstruction or unnecessary light reflection,”

We concluded, light and dark have become loaded with meaning, whitch is constantly influenced by - and in turn influences how we perceive - the lit environment around us. The scheme brings together the literal light (what we see) with the interpreted light we experience emotionally. We were looking for a meaning of light that we could support with an experience,” “We wanted to show that a lighting concept is not just a matter of perception, but can support the identity of a space.” It shows that lightingdesign and art are able to improve social and economical strength.