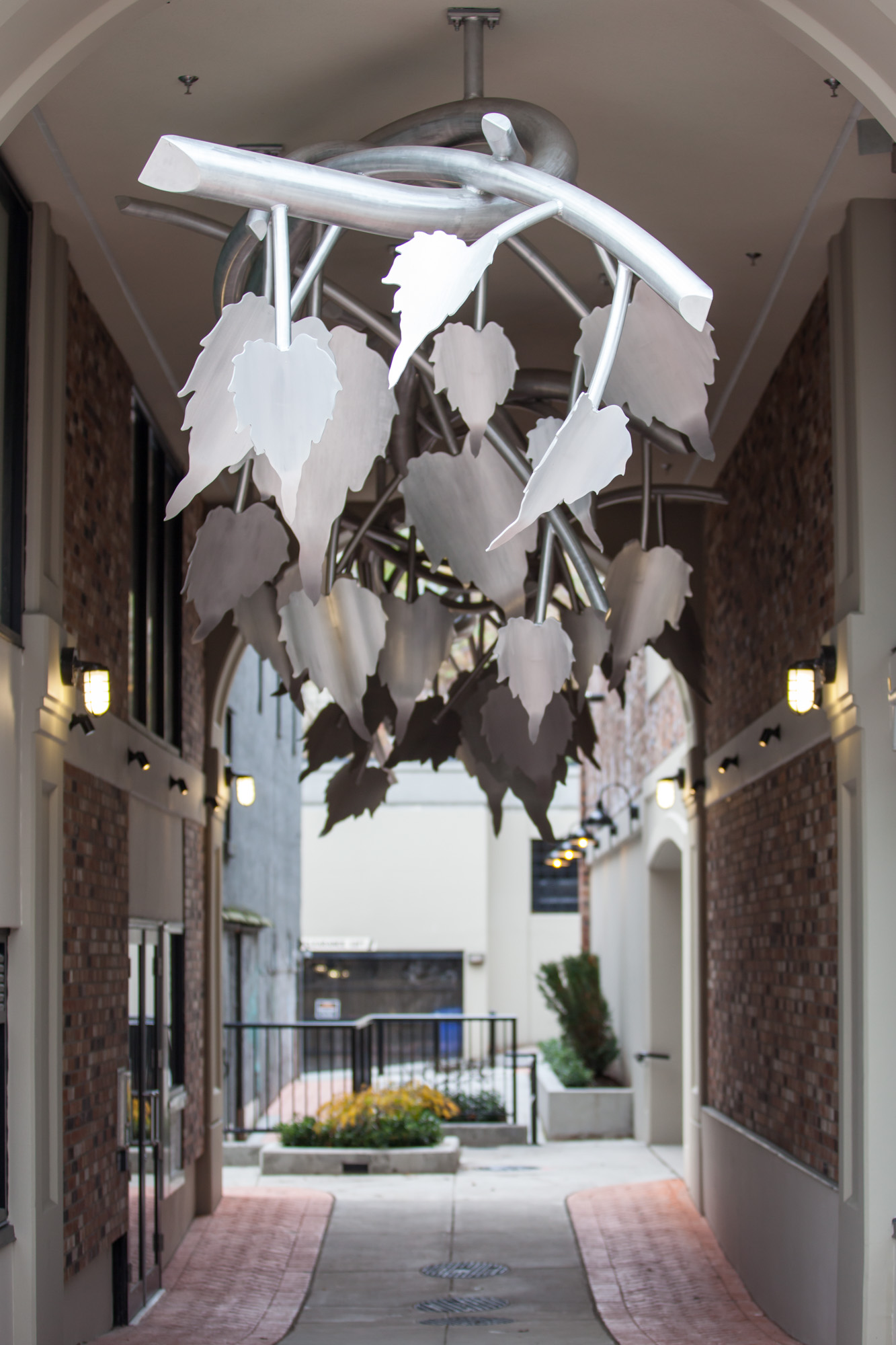 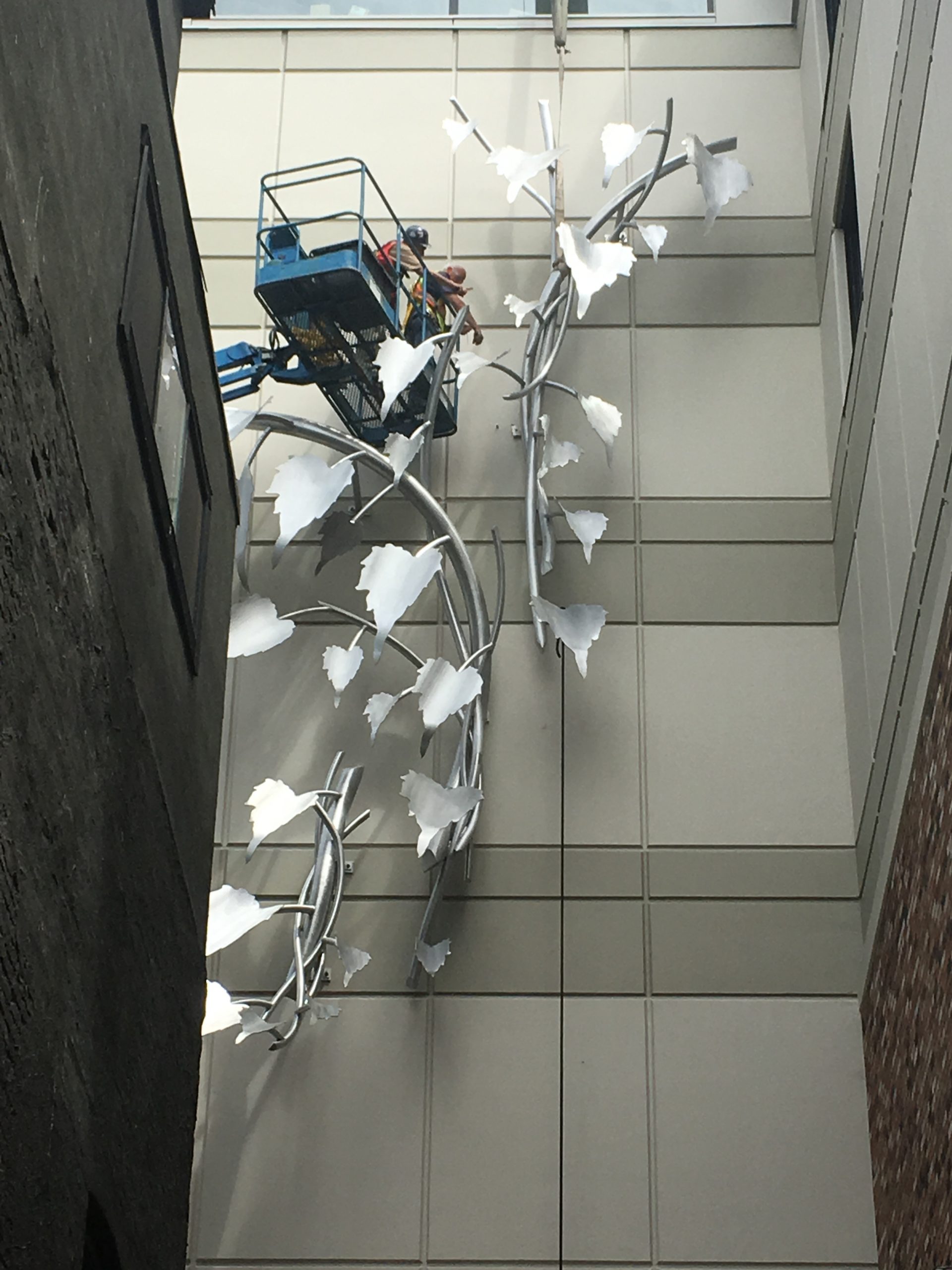 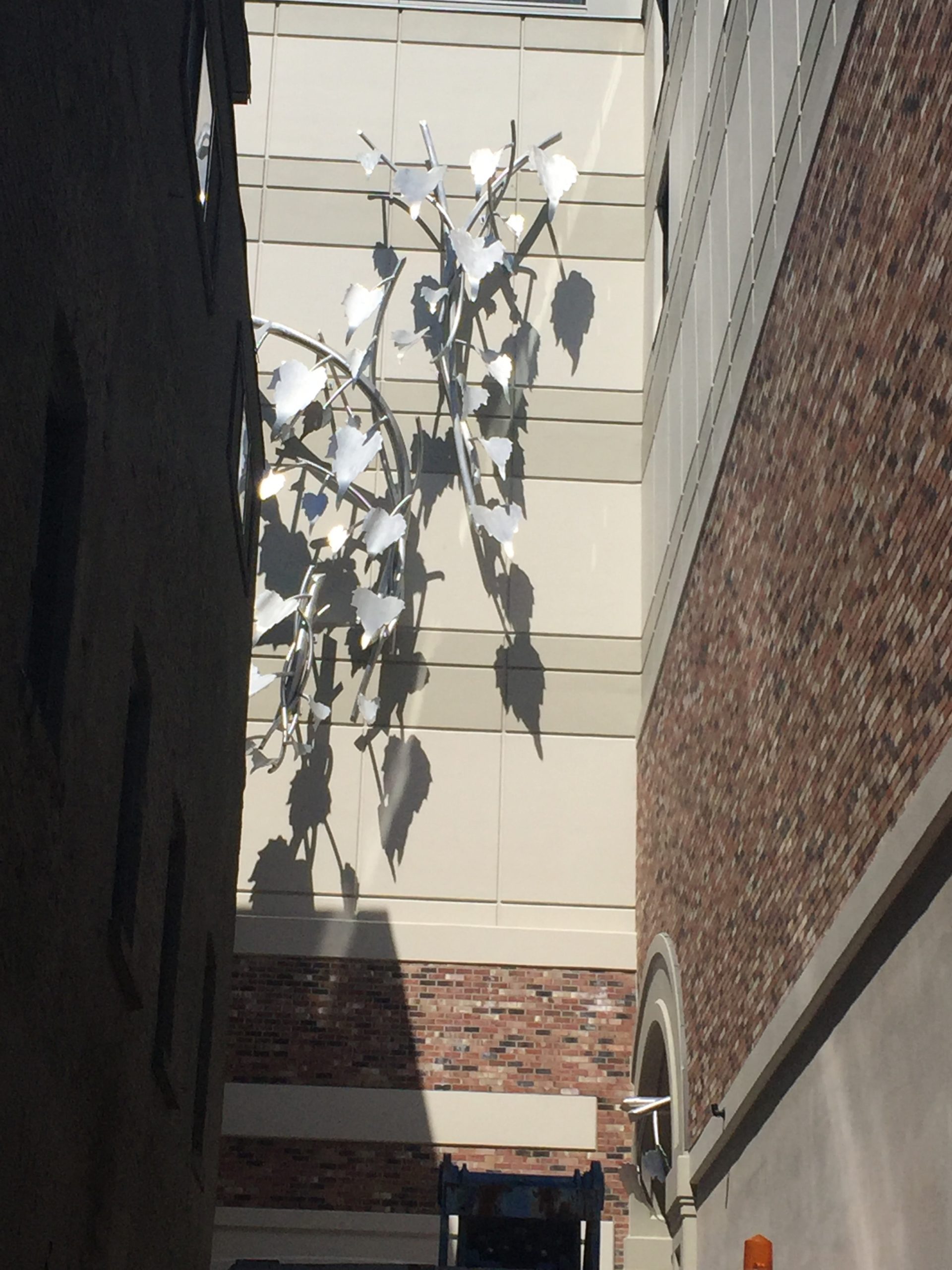 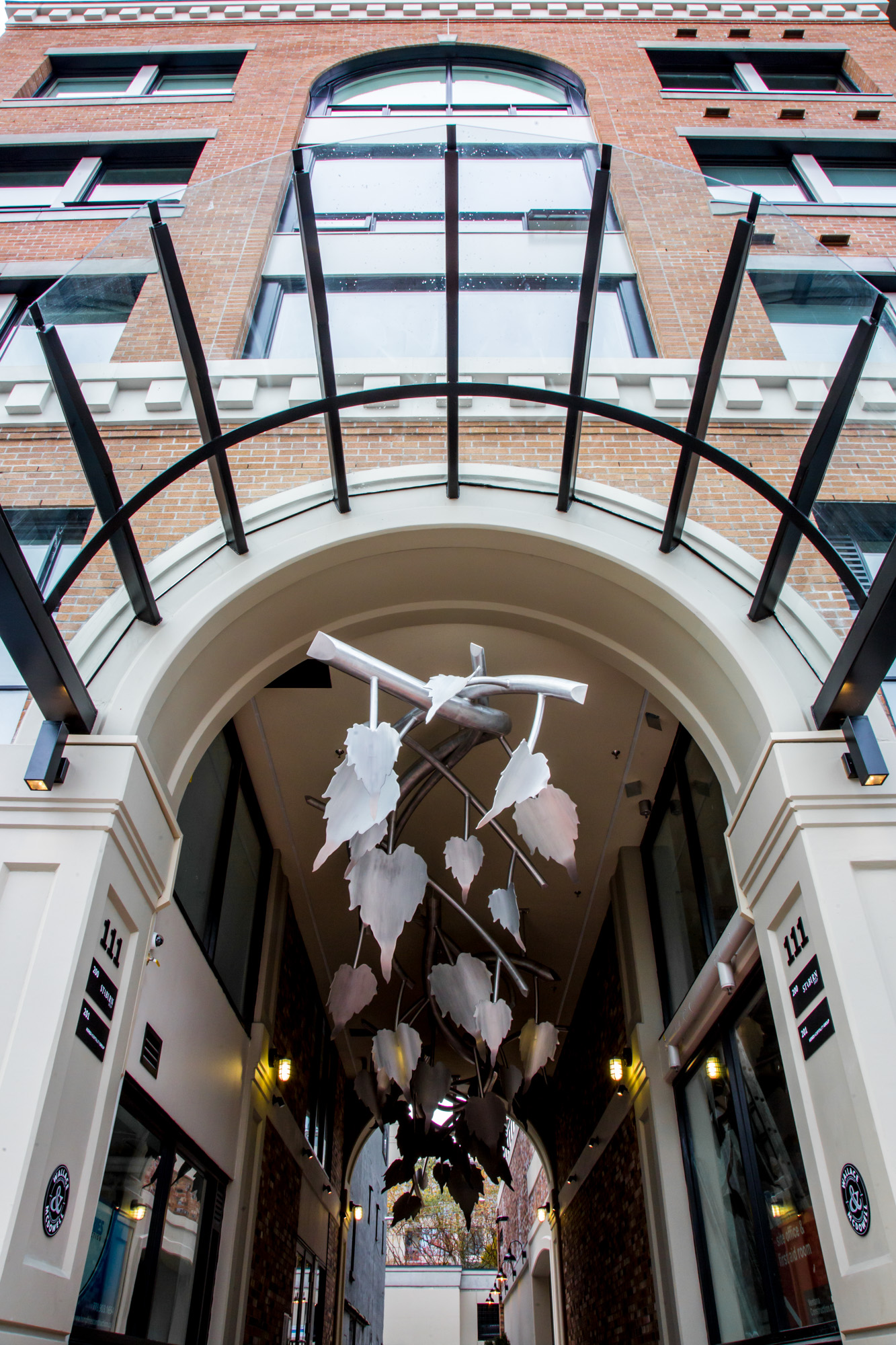 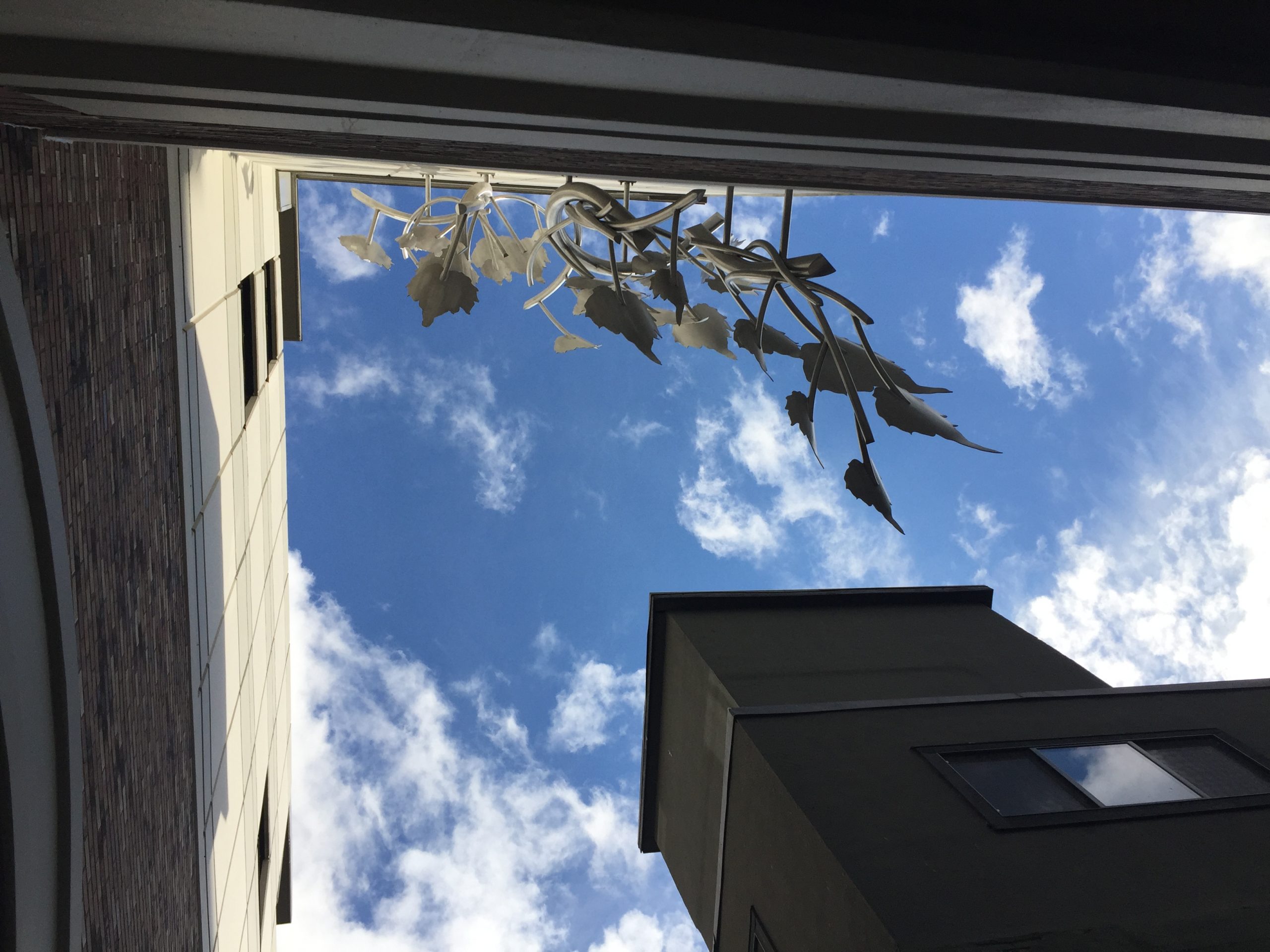 The commissioning of the sculpture Bourgeoning was the result of a three stage Public Art Competition. This two element sculpture was created for external mounting on a new mixed use multiuse residential and commercial urban development. The first element 50 feet long situated in a mews connecting two urban pedestrian walkways. The second is a 60 feet high vine mounted on a vertical wall face overlooking an urban alley. The sculptural vines were made out of 6062 Schedule 40 Pipe while the leaves where made out of 5052 water jet cut plate. Each sculptural element weighed approximately 1600 pounds.

Historically North Vancouver, a working class mill town, was dependant on the logging Industry which evolved as the natural resource sector diminished. The changing economy transformed the nature and character of North Vancouver. Increased regional demand for housing created a gentrified urban core characterized by medium density mixed commercial and residential architecture.
The sculpture’s site development reflects the historic textural fabric of the 1900’s. It was named “The Wallace and McDowell Building” for the original drugstore restored at the prominent south east corner of the development.
The architectural response to North Vancouver’s planning agenda to engage and animate the community’s network of laneways and alleys created a sculpture opportunity where this potential was the greatest.
The sculpture’s conceptual intent was to reinforce the traditional relationship between the period horticulture and architecture. The horizontal Mews sculptural component “Bourgeoning” is located in the fifty foot long midblock pedestrian connector between the Lonsdale Road and the Laneway.
The vertical 60 foot component is mounted on a building wall overlooking this alley dominating the strong visual vantage point to the major east west artery 1st Avenue.

The collaborative design team was Jim Galloway P. Eng. and the Artist Illarion Gallant in Victoria B.C. The fabrication team included Advanced Bending Technologies, Langley B.C., water jet cutting by Stark CNC, Victoria B.C. with final fabrication assembly by Associated Sheet Metal, Victoria B.C.
In preparation for the sculpture prefabricated steel embeds where cast in cast in place the ceiling of the Mews. Fabrication commenced upon the final design sign off from the Engineer. A helix design regime was developed and submitted to the pipe bending facility. The leaves were then cut, then a stem system developed, created and fabricated. The completed elements were then shipped to the fabricator. The surveyed embed locations were located on the fab shop floor by the surveyor. From those points the stanchions were placed and the work was developed from the model and these fixed points. The bent vines were fitted and welded and then the leaves were tacked to my satisfaction then welded. From this point on fabrication was a mixture of working from the model and intuition. Upon completion of the fabrication and the final engineering sign the sculpture was sent to North Vancouver for installation.

Reflecting the important community values of growth and prosperity, the imagery and narrative of “Burgeoning” is a leafed vine which exhibits the tenacity to flourish in the urban fabric. This tenacity for survival and prosperity is what makes communities great. The definition of the word bourgeoning is a verb which means, beginning to grow or increase rapidly; flourish. Visually the texture of the aluminum ivy against the architecture of the recreated historic urban fabric is familiar. This texture creates an inherent plausibility with the viewer, but the magnified scale of the proposed sculpture intensifies the visual experience of the uninitiated.