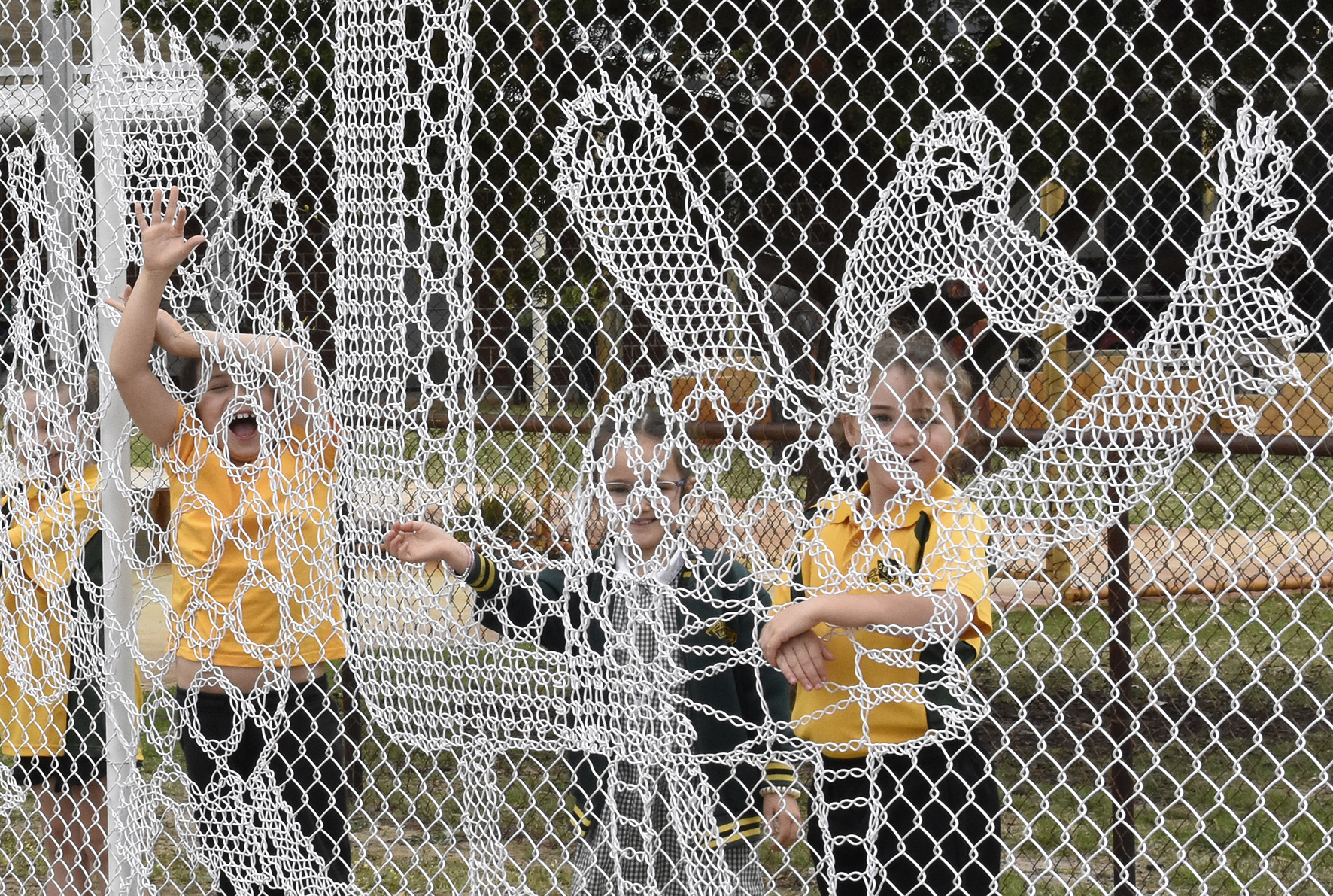 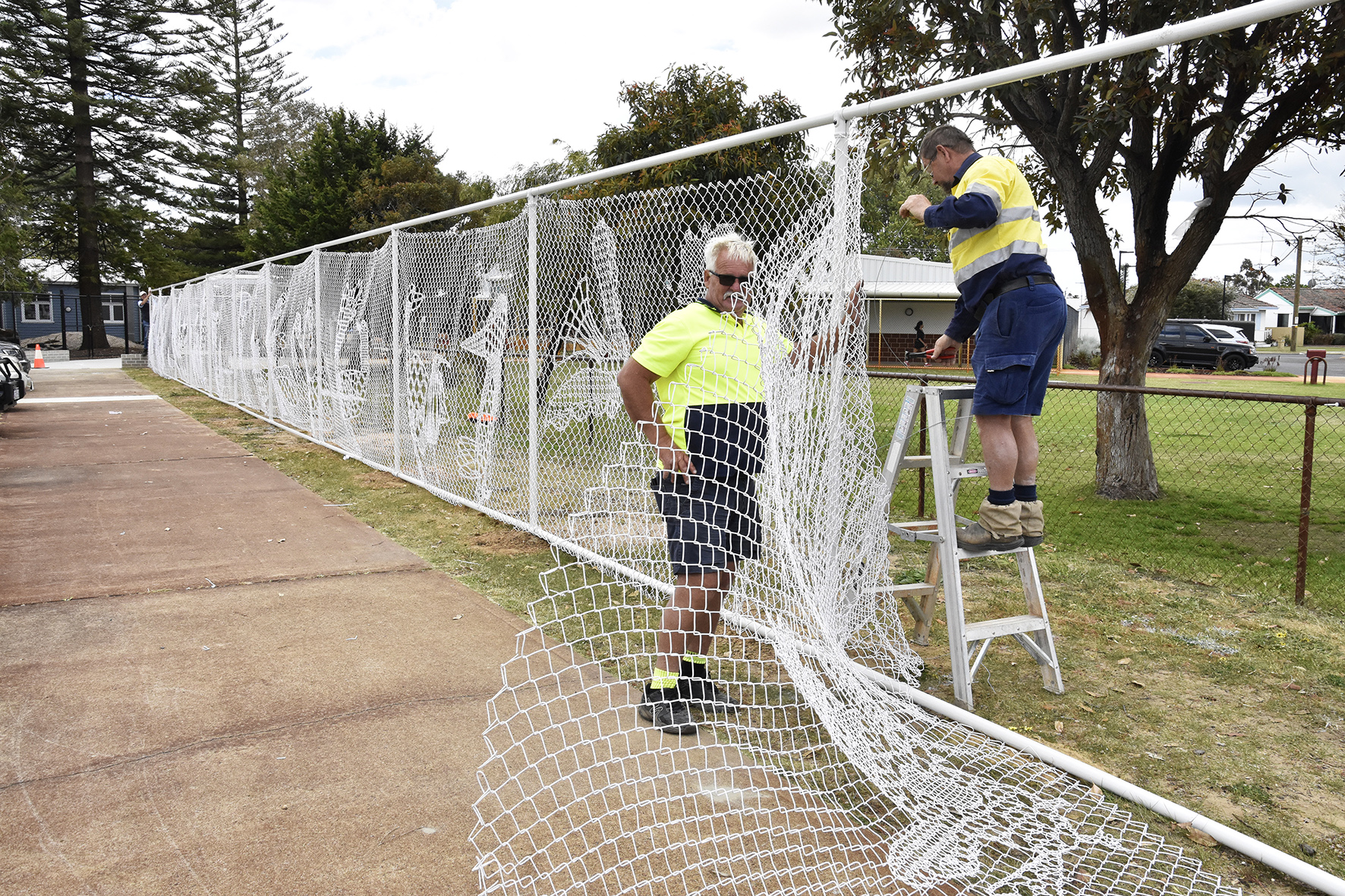 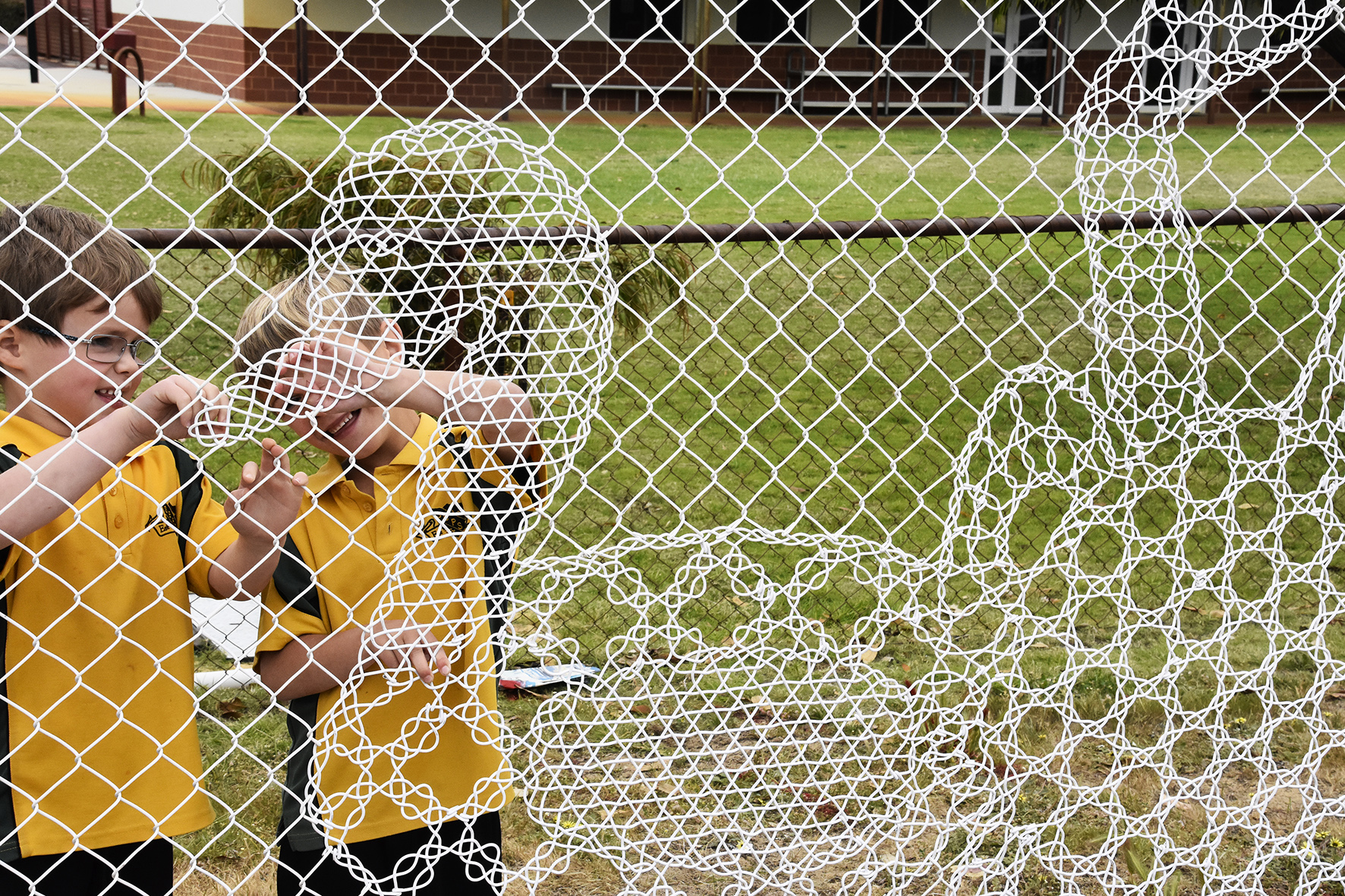 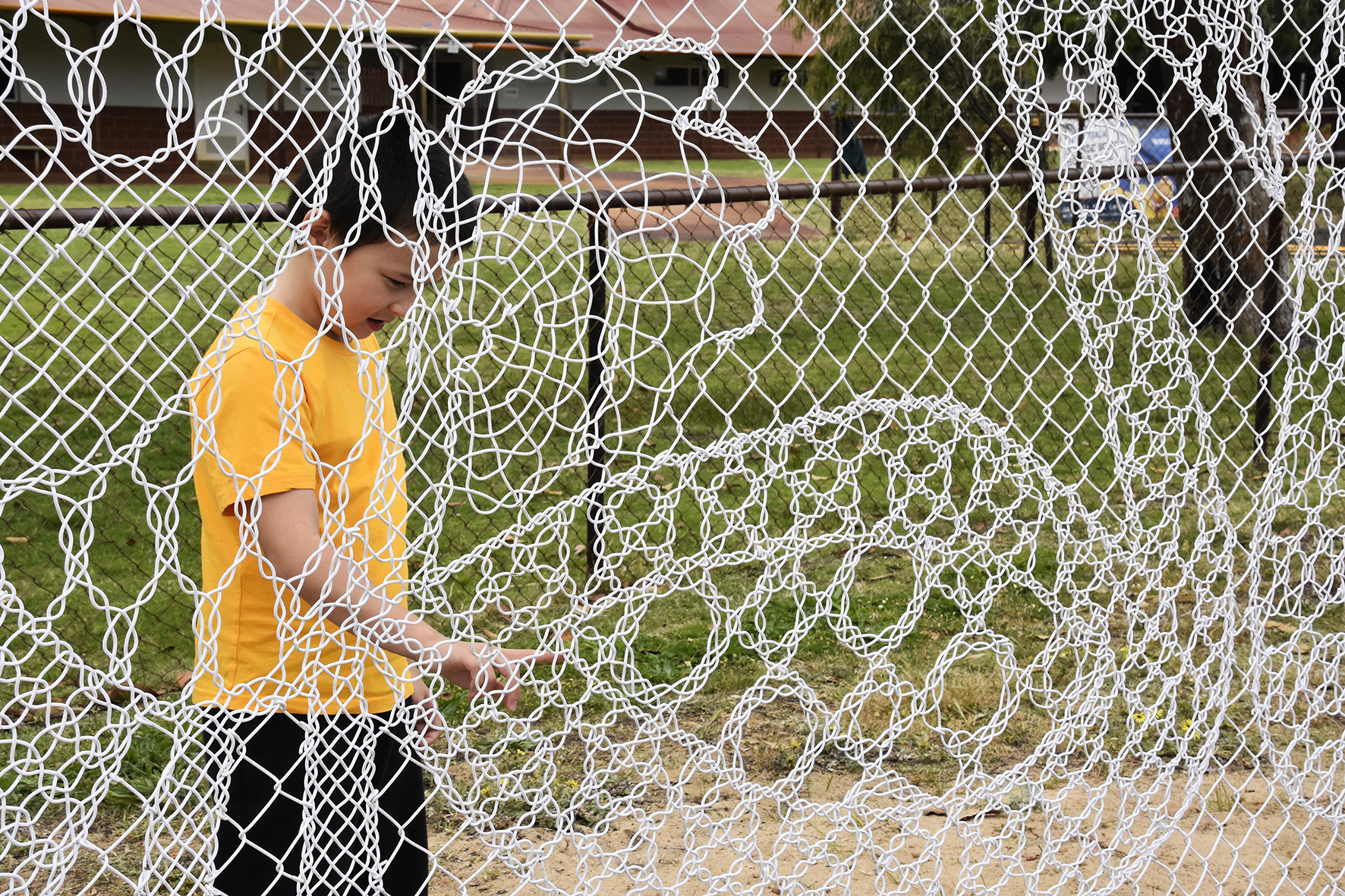 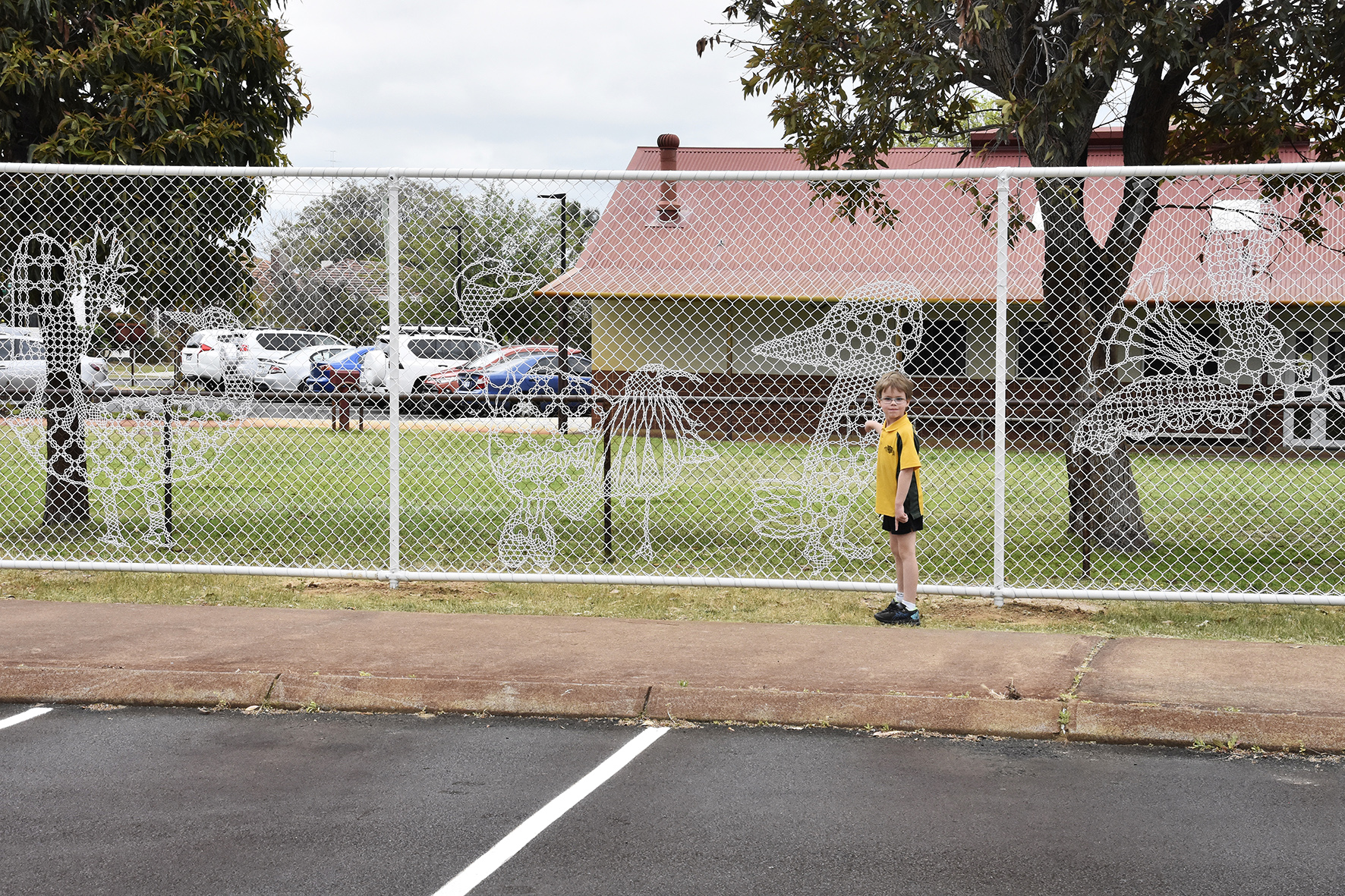 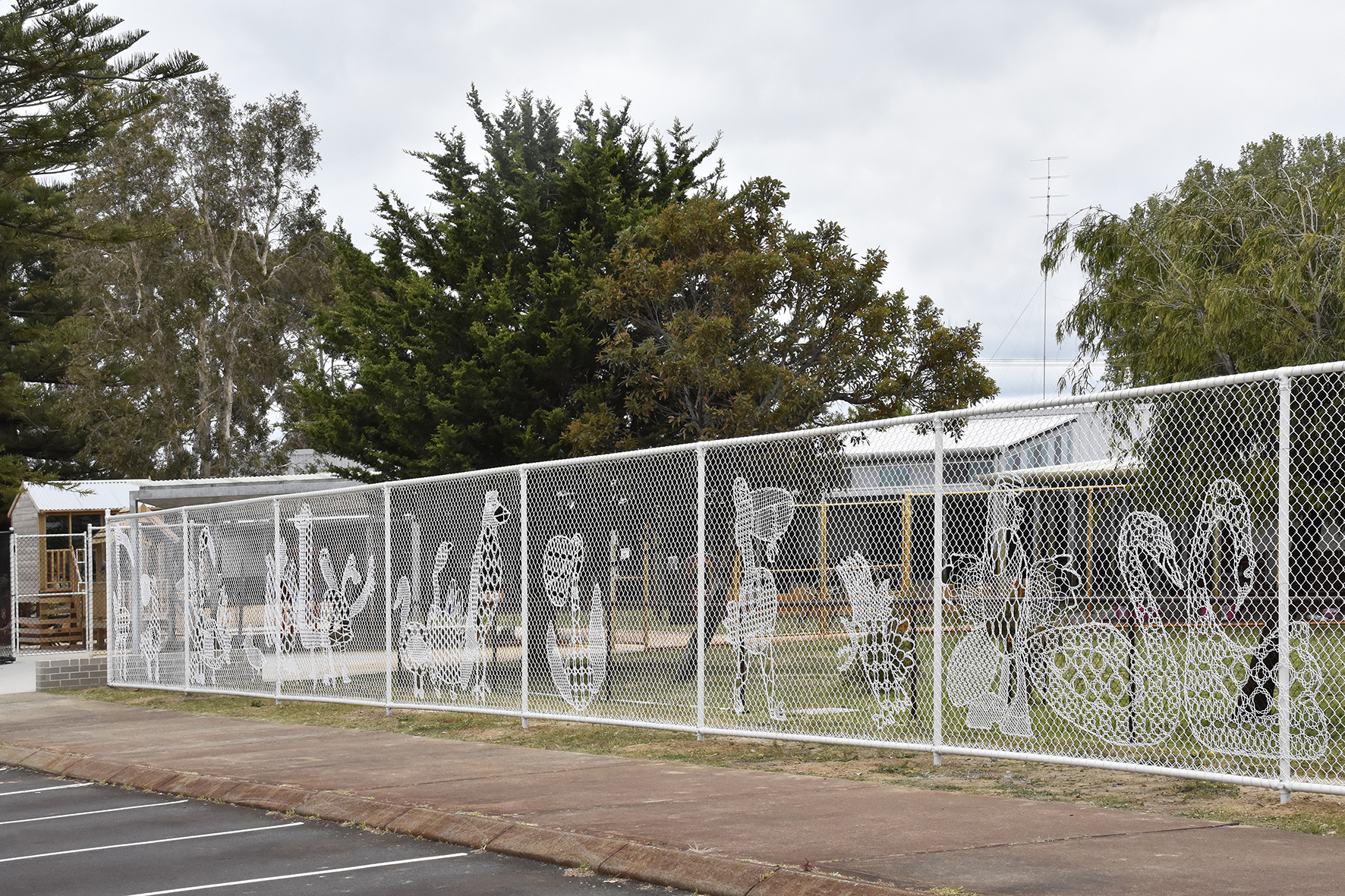 The South West of Western Australia is a biogeographical island and biodiversity hotspot that has developed over many millennia. Around 200 bird species are recorded in the Bunbury area including 16 endemic species and 21 shorebird species that migrate annually from the northern hemisphere having bred in the Alaskan Siberian summer.

Big Swamp in Bunbury is a highly modified environment but despite this it attracts many of these birds, as well as avid bird watchers. For the LaceFence artwork the South Bunbury Primary School students were keen to depict the birds that live in this local landmark.

Paula asked the children to think about the different types of birds found at Big Swamp. What they look like, what they do and how they sound. From these talks with the children, Paula then guided students through a step by step process - instructing, drawing, stopping, listening, drawing again. Each class had a theme and kids drew what they related to most.

Then followed the arduous task of translating the beautiful, zany children’s drawings into wire stitches. Keeping the integrity of the original drawing is very important to Paula, within this process of creating imagery with lace.

So what is LaceFence? LaceFence a metal fabric developed by Dutch designers Redfort Fabrics. It reinterprets the cyclone fence, introducing designs of bobbin lace wire within industrial chain-link fencing. LaceFence removes the hostility and stark industry of the chain link fence and recreates it with a timeless sense of kindness and craft. To take children’s drawings of our WA wildlife and translate them into lace stitches takes this juxtaposition to another level.

Lacefence is fabricated in Bangalore, India at the Redfort production house. For this commission we used the PVC coated bended mesh version of Lacefence to create a 26m long x 2.2m high perimeter fence at the school's entrance.

LaceFence is made by a combination of industrial and manual processes. The decorations are made by hand and integrated into the machine-made mesh. Importantly, it’s not that the LaceFence looks like lace - it actually is lace; the stitches are traditional bobbin lace stitches made in metal wire. Interestingly there is a strong lacemaking community in the South West of Western Australia and there's been quite a buzz about seeing their craft translated as an architectural material. The Lacefence artwork in the school setting creates an emotional connection which of course is vital for young people. Recognising the artwork has been made by hand, recognising their own local story and obviously recognising their own drawings was very special for the whole school community. The local bird watching community were also thrilled, and the artwork has been quickly added to Bunbury's public art trail.