Between Earth and Sky - CODAworx 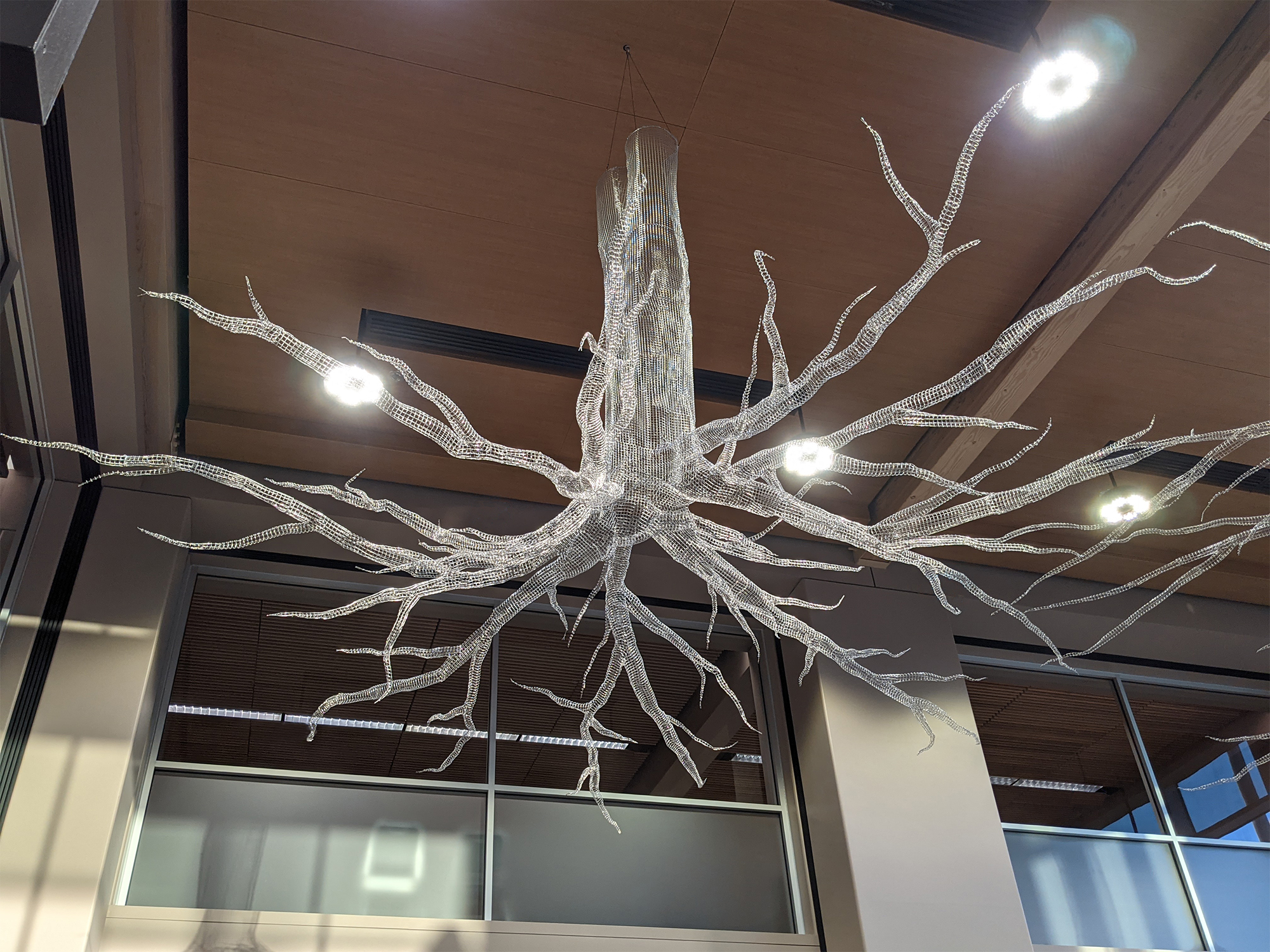 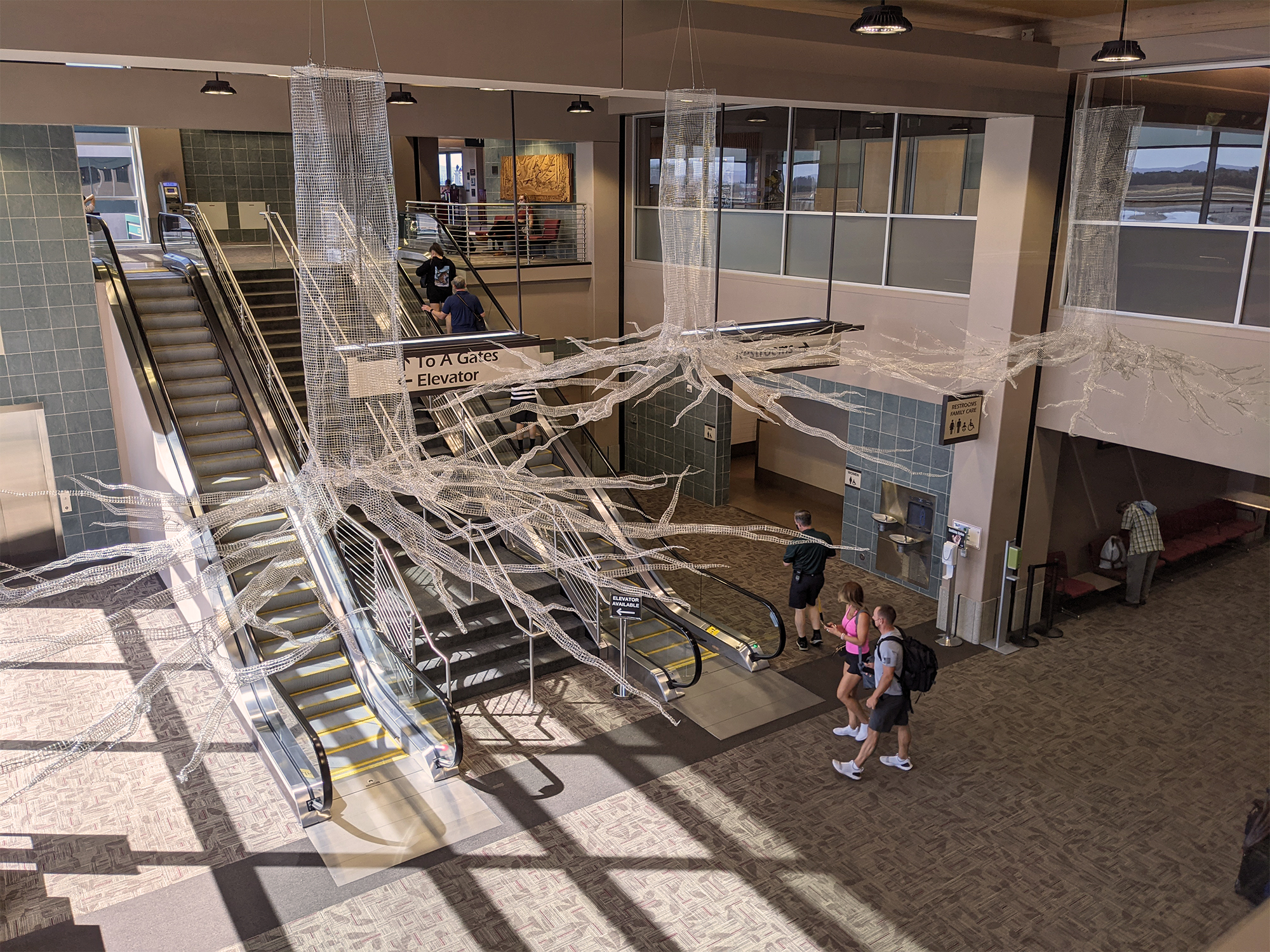 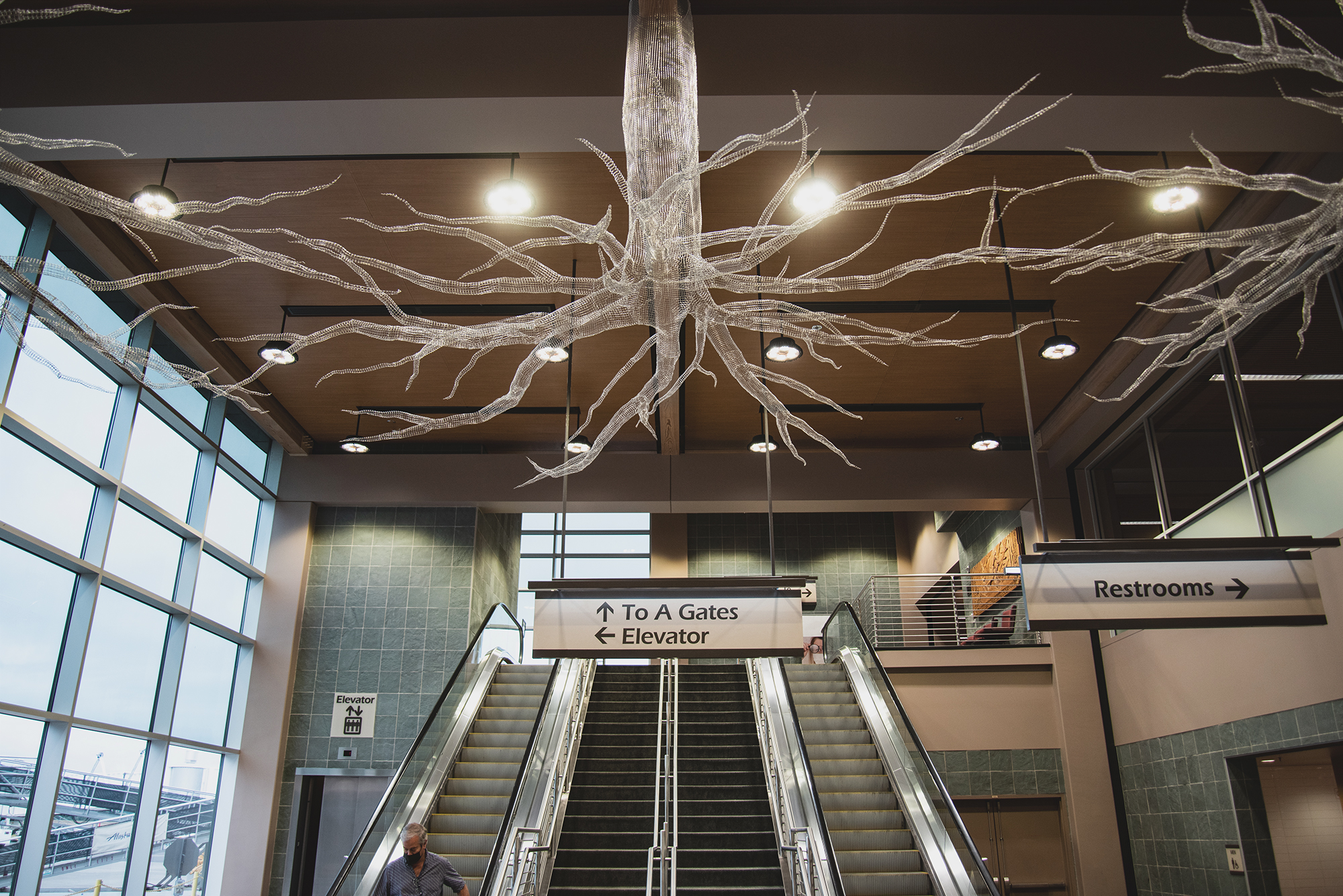 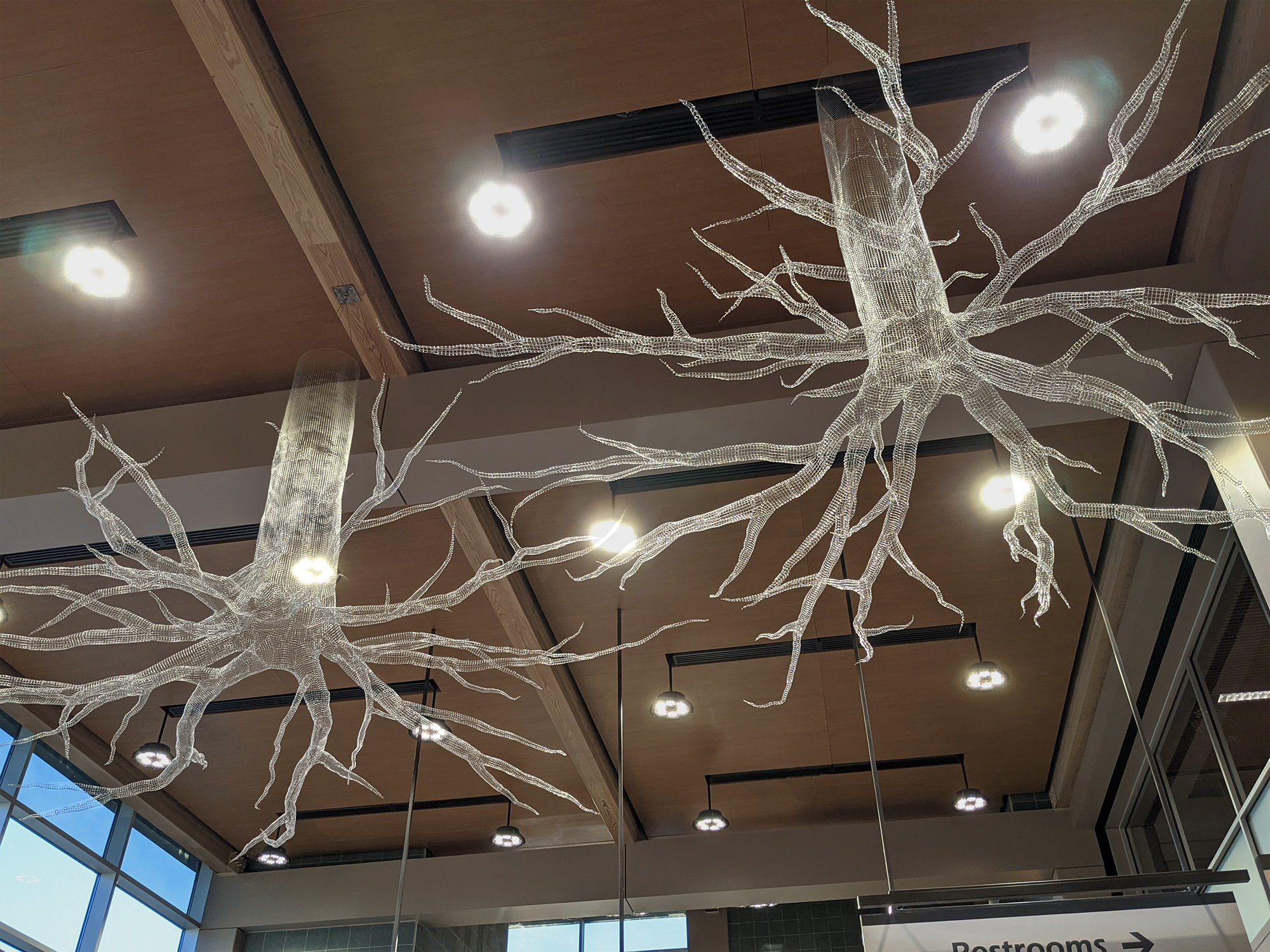 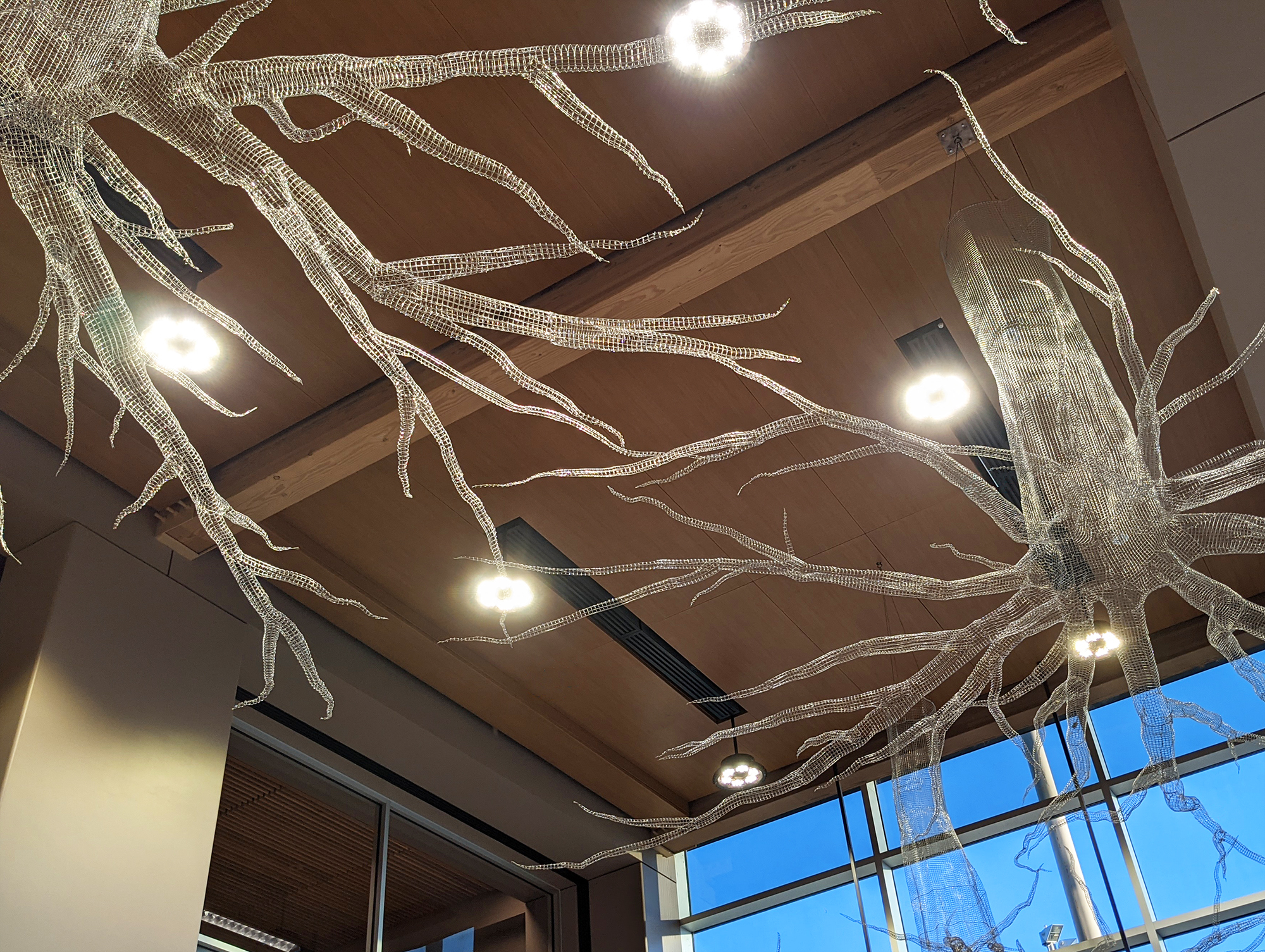 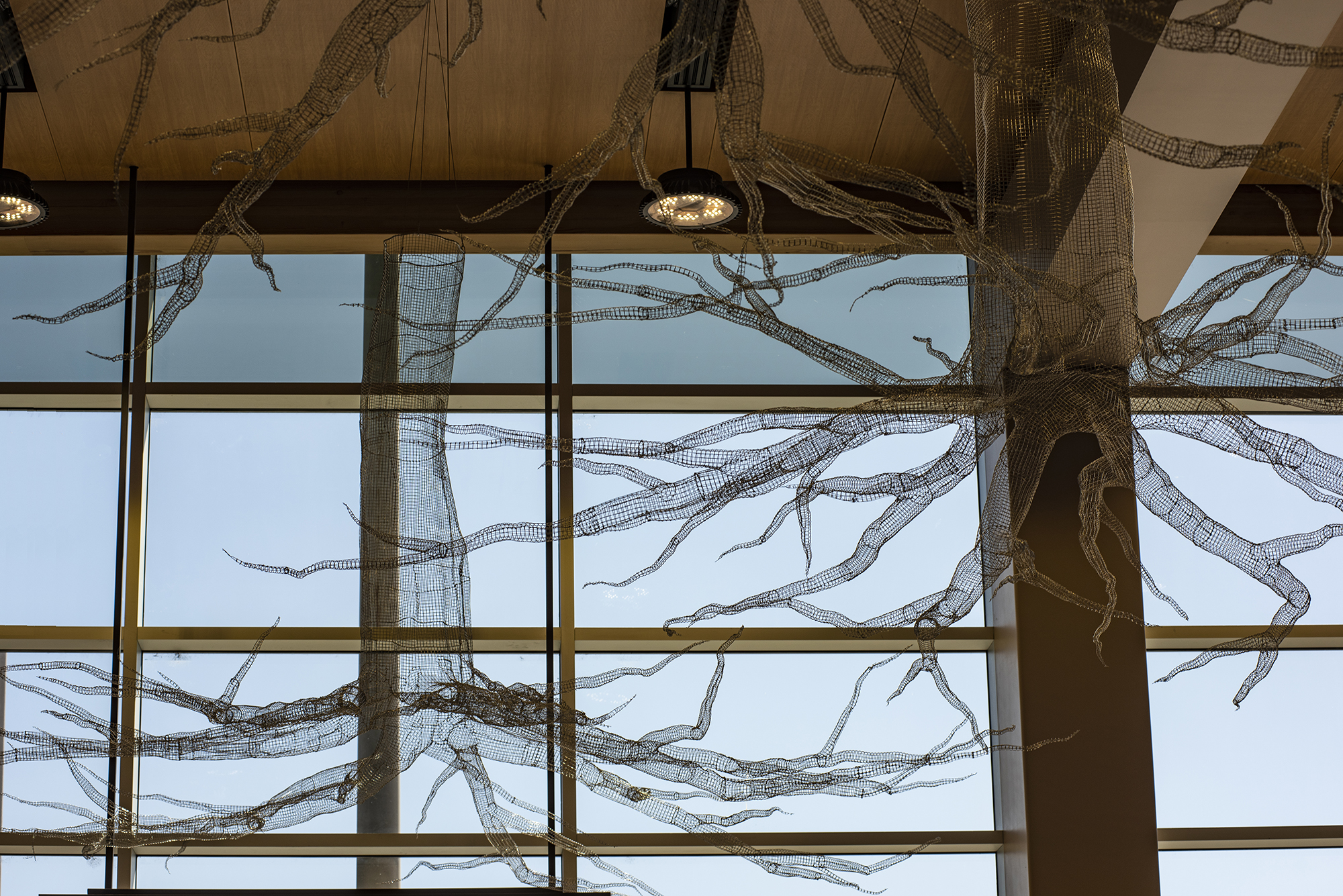 The iconic forests of Eugene have served as a constant for the city since its founding, serving as the catalyst for prosperity through its generations. This led to a study of the processes used to convert trees into lumber turning them into man-made materials completely unrecognizable from their original forms. Conversely, aircraft construction techniques create sweeping forms from rigidly dimensioned materials. Playing off this reverse relationship, tree forms were reimagined as assemblies of wire mesh and suspended above the main entryway. Depending on where they are experienced or the time of day, the sculptural tree forms will appear differently, in certain instances appearing to hover within the space while at others making one feel as if they are immersed in a forest. It is intended to be both referential to the area’s history and culture but at the same time to maintain a mysterious or spiritual quality acknowledging its past connections to the natural world.

Although the waterways, prairies and savannahs are all essential elements of Eugene’s distinctive landscape, most iconic are the dense forests that once served as the area’s main economic engine. Predating man’s occupation of the territory, they have served multiple roles over the course of history and their presence is still apparent in the attitudes and aesthetics found there today. As I began to consider the influence they have had over time and what space that they might occupy in the shared consciousness, I imagined a stand of virtual trees floating above the entryway like ethereal greeters, silently representing the past while continuing to oversee the future. At the same time, I began to consider the context of the airport and the more practical concerns of the artwork. I was particularly interested in the construction techniques of planes and how that could be integrated into the design as a reference to the facility’s functions. Inspired by Monocoque, the structural system used on aircraft where loads are supported through an object's external skin, I visualized the forms as graceful and airy assemblies of translucent metal suspended delicately within the main circulation space.

The installation consists of three life-size sculptural tree forms suspended just beyond the foot of the escalators in the main entrance lobby of Eugene Airport. The artwork serves as the central connector between arriving and departing passengers and all flight gates, functioning as both gateway and wayfinding device. In addition, it is thematically an extension of the narratives of both the wood and faux wood surfaces found in the airport interiors. Selected local tree specimens were translated into digital models and used as patterns for final fabrication. The cladding pieces were cut out and hand formed from Stainless Steel 316 Welded Mesh 1/2 x 1/2”, 0.047” diameter and then stitched together with mechanical fasteners. Each structure weighs less than 30 pounds and is suspended from the existing ceiling with 1/8” steel cables attached to the structure above. The top of the cable for the center tree is attached to a stainless-steel lag eye bolt installed directly into the bottom of the center wooden beam while the support cables for the two outside trees were routed down through access holes created in the existing metal ceiling tile.