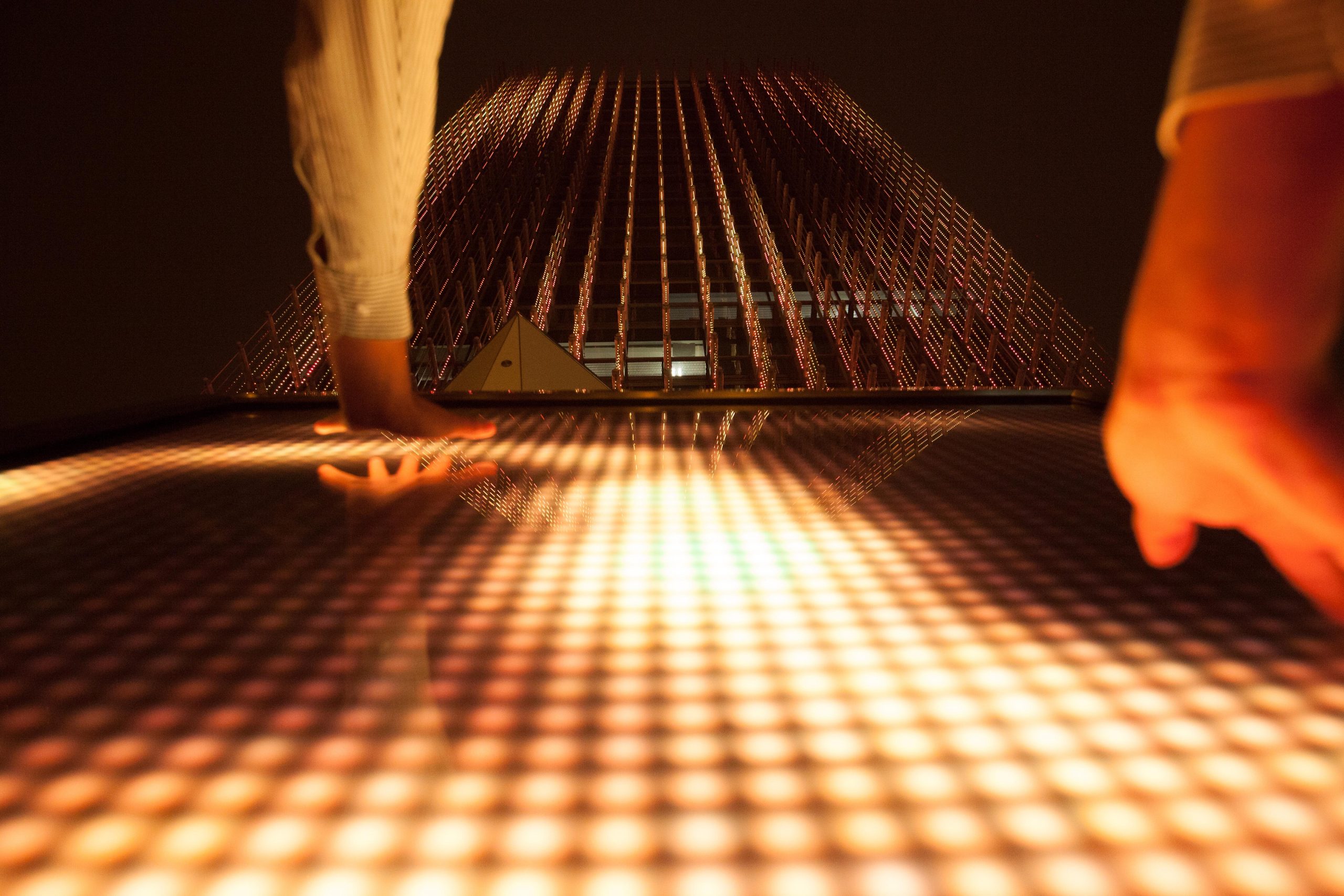 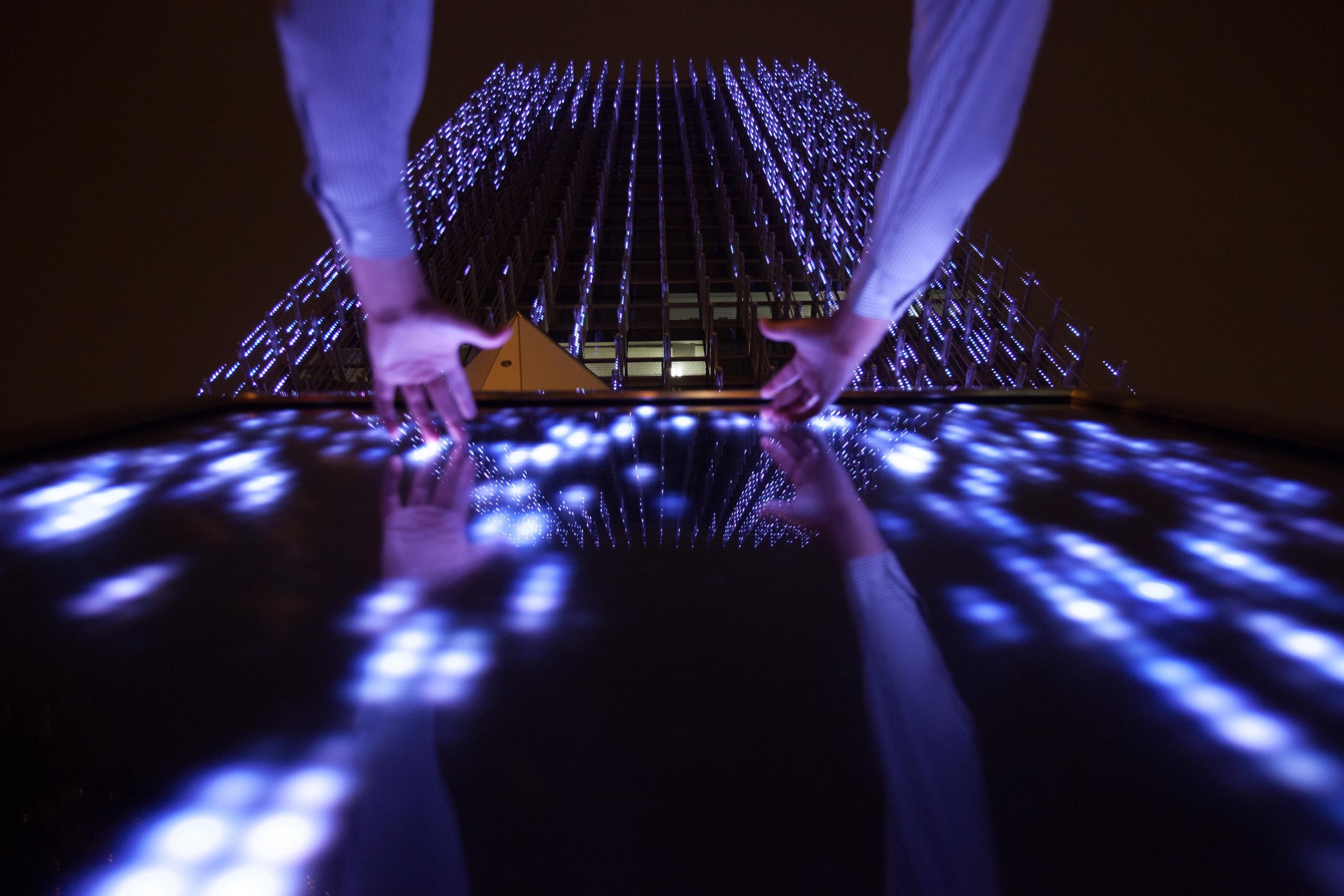 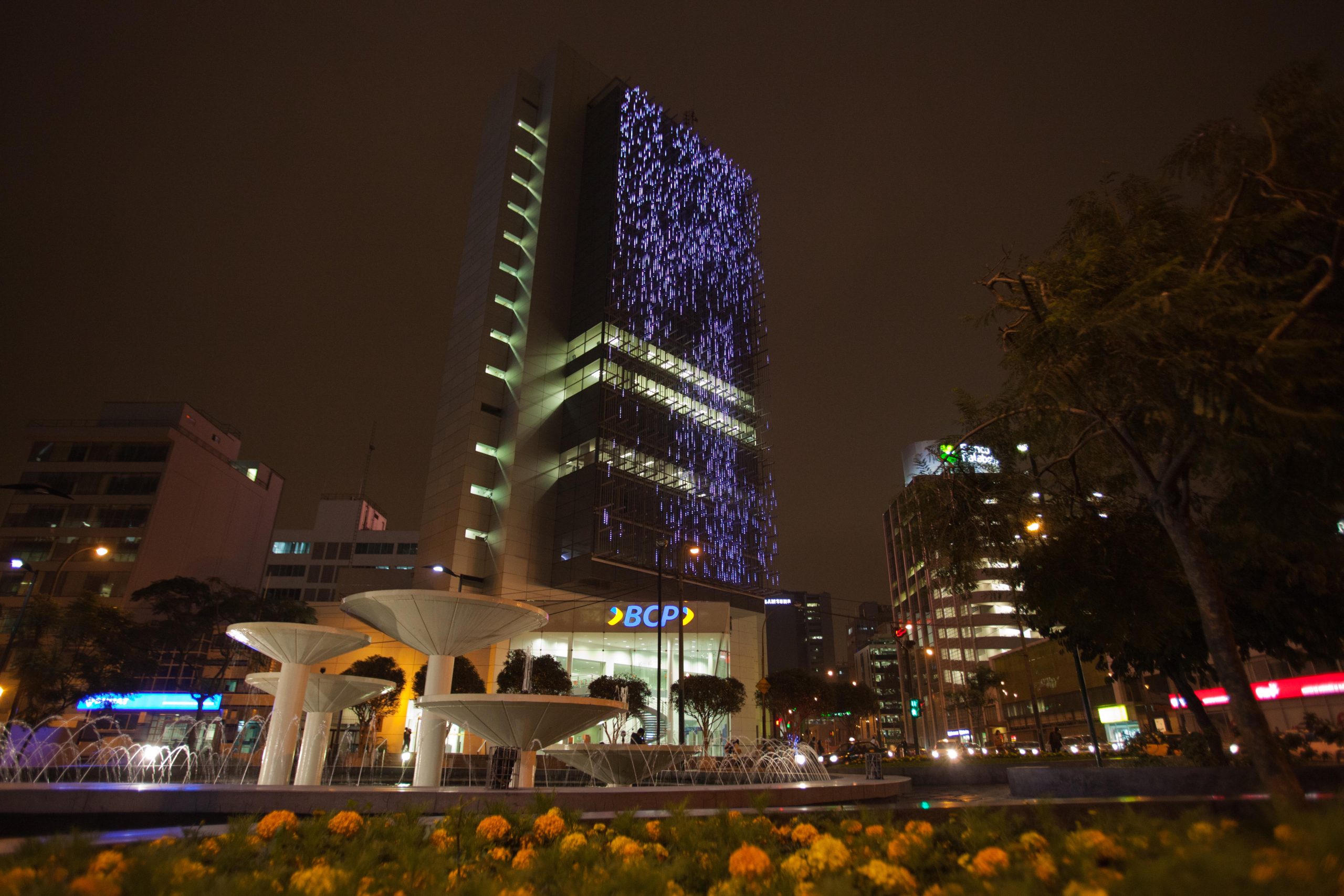 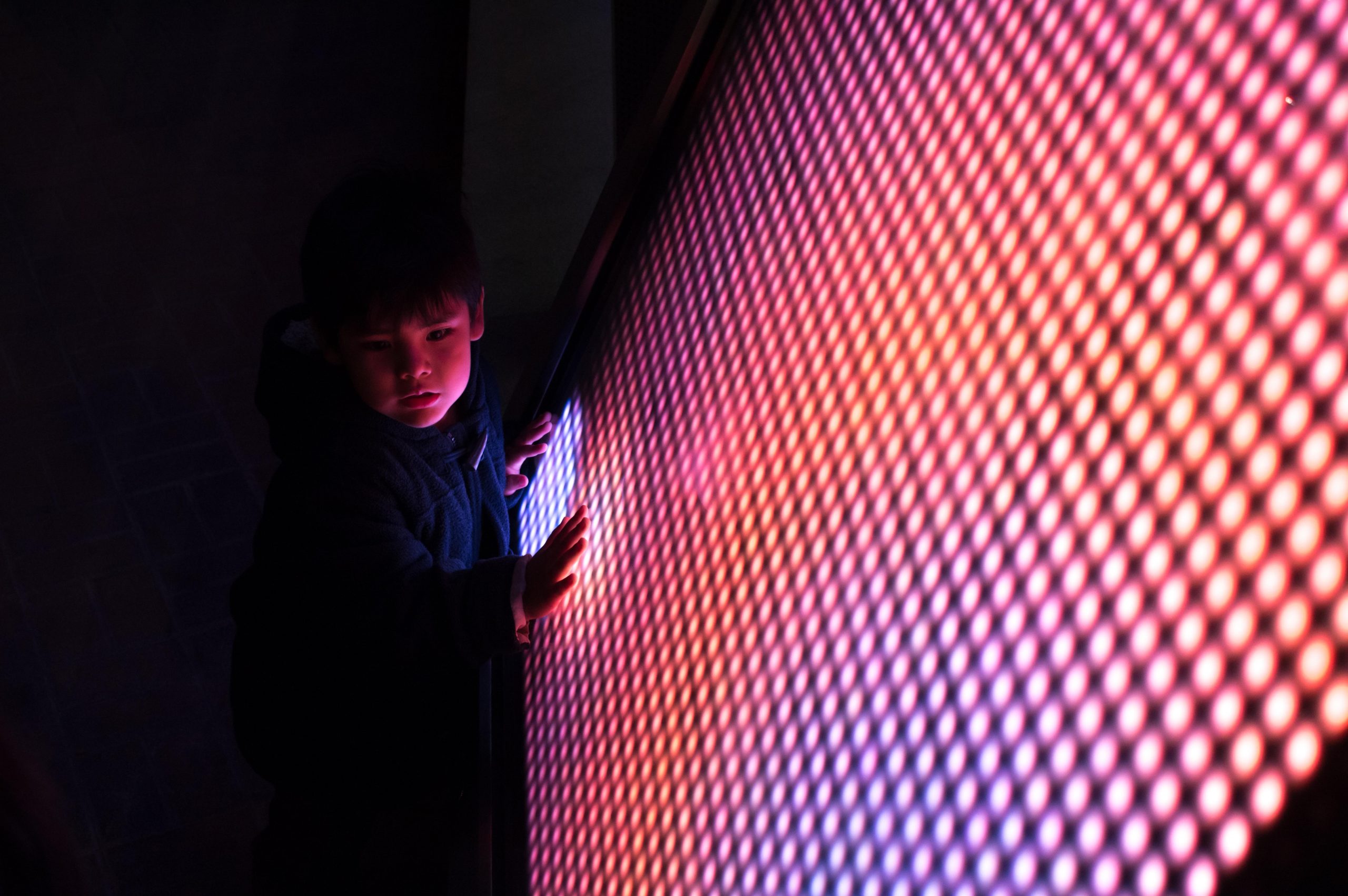 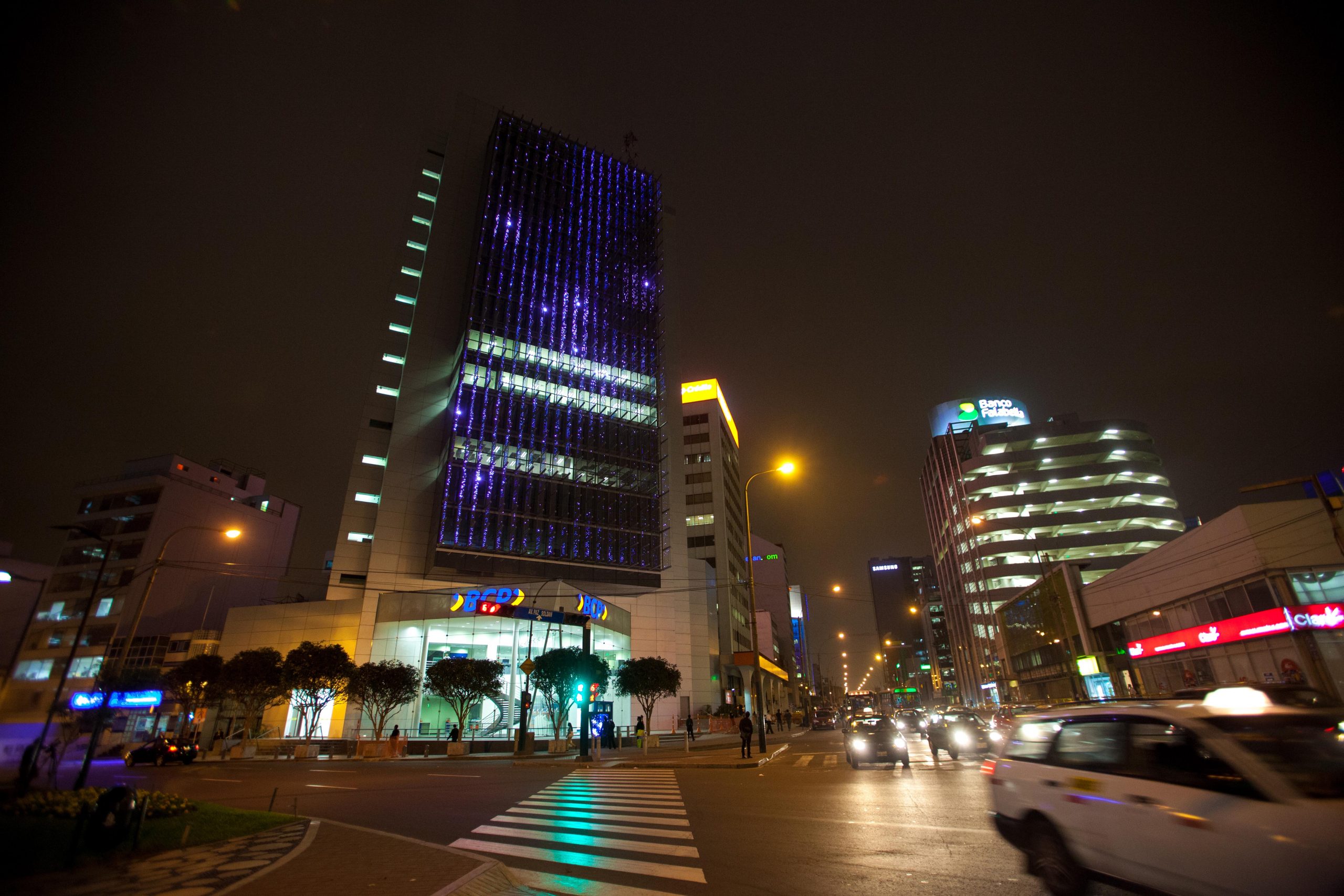 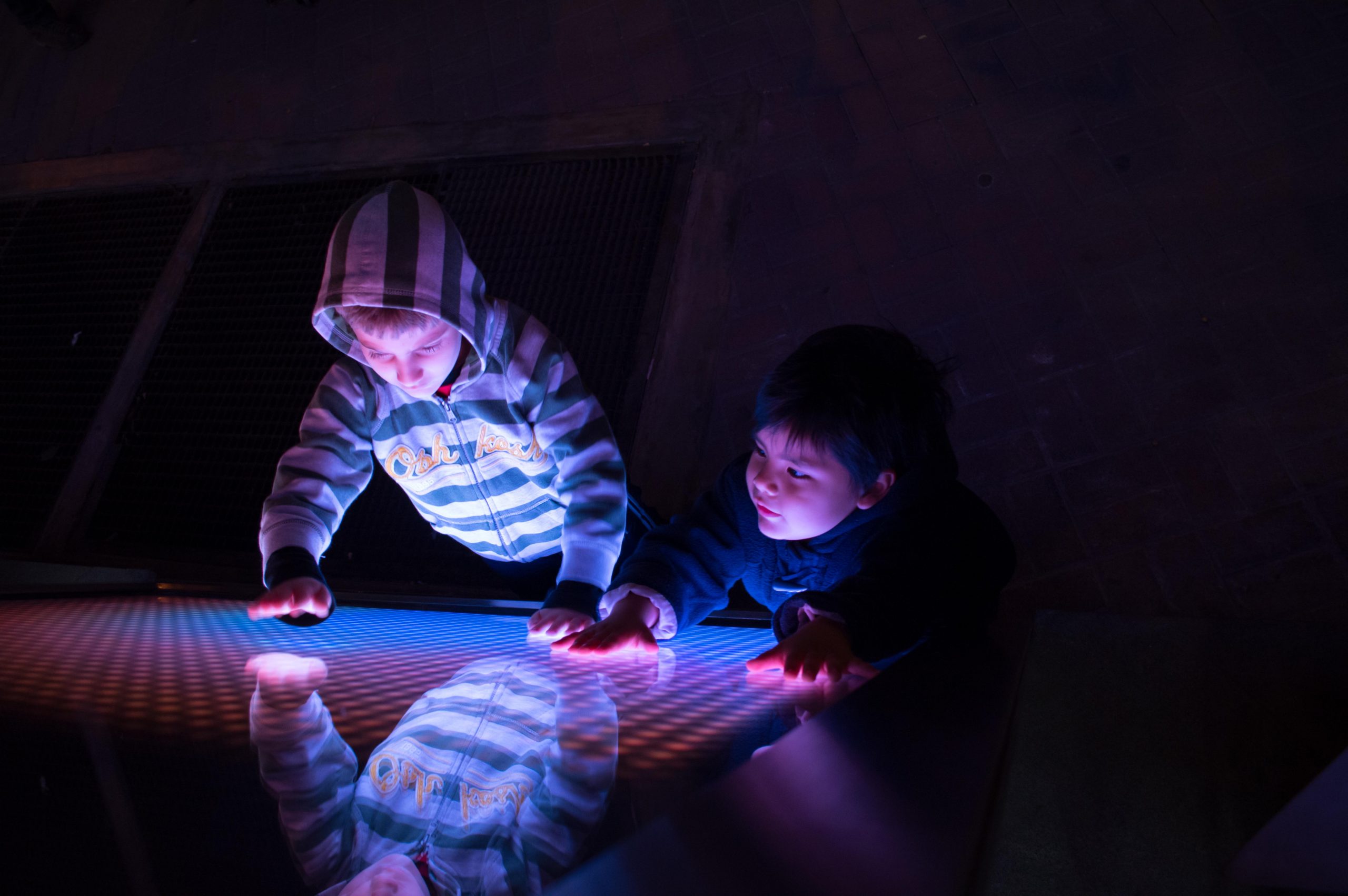 The original design brief from the client was to have a media facade. Our approach provided a deeper significance to the city; offering a meaningful connection between the bank and the people.
Our proposal was to create an iconic public artwork installation with an interactive facade to directly engage the general public, suggesting new ways of seeing, feeling and experiencing one’s own perception of one`s self. The client has bravely opened their facade for the public to manipulate it much like painting on a canvas, is a democratic installation, everyone and anyone is free to join in.

To integrated the art piece into the facade our studio not only design the scheme, was involve in the design of the structure, the lighting , the design of the podio and the implementation. The installation consists of three main parts; the 3D facade canvas with 6 layers of LEDs (covering 50 x 19 x 1.2 meters), the interactive LED outdoor podium (1.7 x 1.5 meters) with multi-touch sensors and the interactive and lighting control systems.

The public facing podium has a direct visual relationship with the facade creating an impressive but unifying experience. Stereo speakers flank the slanting podium, which delineates the space for expression. The podium senses 3D depth and provides a touch-less interface that transmits body movements, via live interactive programming, onto the 3D facade.
Each show has a unique interface that intuitively steers you to express yourself. Much like a musical instrument, people generate their own composition but smart algorithms are working in the background ensuring a beautiful encounter.

This project need a multidisciplinary team to achieve this important art installation as the artist imagine. The concept design of the project came from Claudia Paz and her office was the leading designer for the entire project and commission. In collaboration with the studio a group of programmers , managers, engineers and sound artist work closely to achieve the concept design. Claudia Paz do the art direction, and follow up closely what was happening in the collaboration studio they hired to manage the programming content in London. Several draft videos came out from the studio to the programmers and video artist, several meetings in London. After 8 months of work, the implementation day arrived , the work was translated from the computer to a real live facade like a canvas were we can draw. More than 8 weeks during the night, the artist and the team were there setting up the desire content as she dream about.

The different shows provide a canvas for emotional expression and experience. The installation gives people magical powers to create situations that are normally reserved for fantasy. Some of them : ‘Rain’, you can part the shower of light like an umbrella. ‘Sand’ is in an organic manipulation of the facade, where shadow and form drift as dunes, followed by the sounds of the wind and shifting sands. ‘Stars’ provide the remarkable opportunity to dream up your own constellations in the middle of a bright city, each star appearing with an acoustic chime.