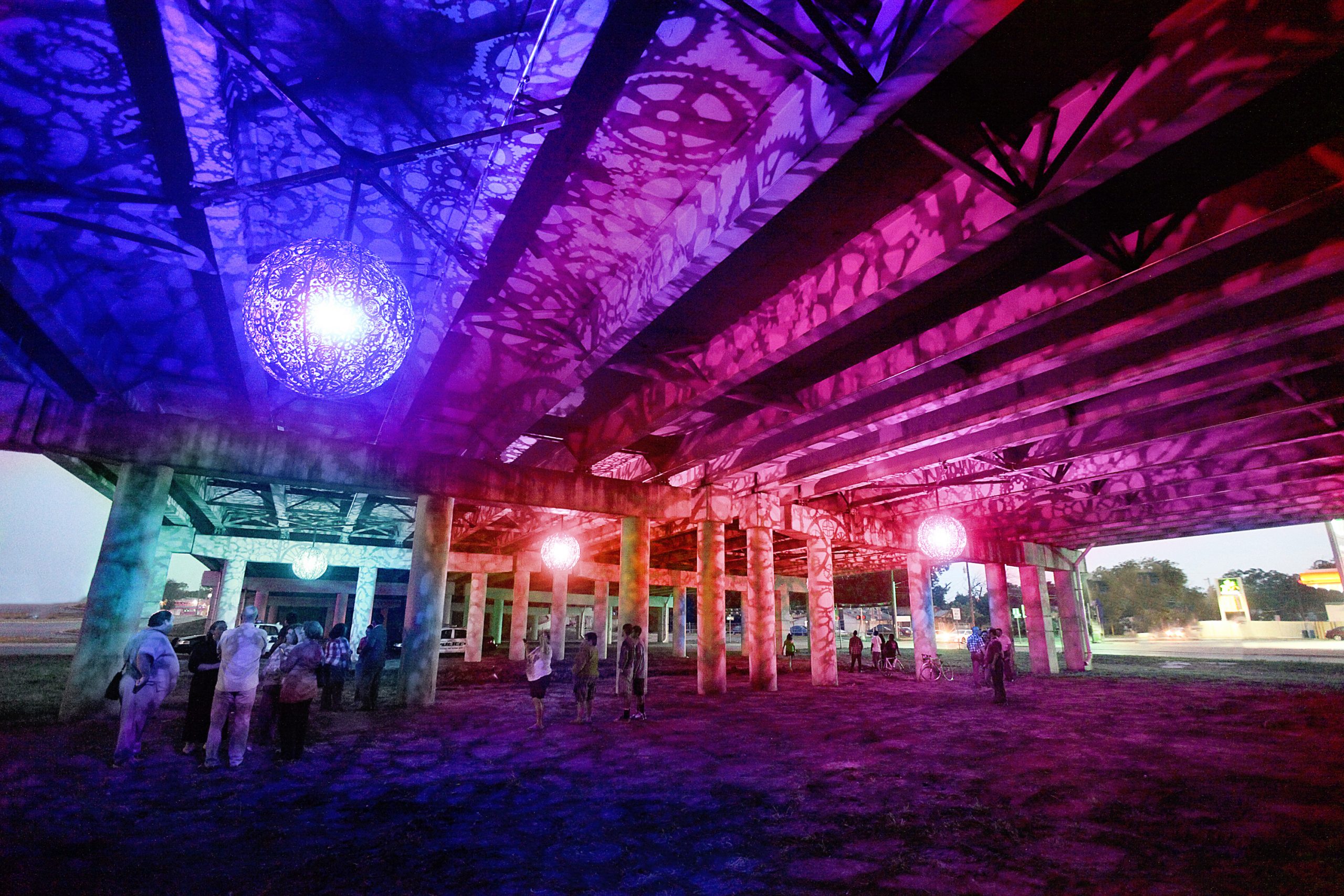 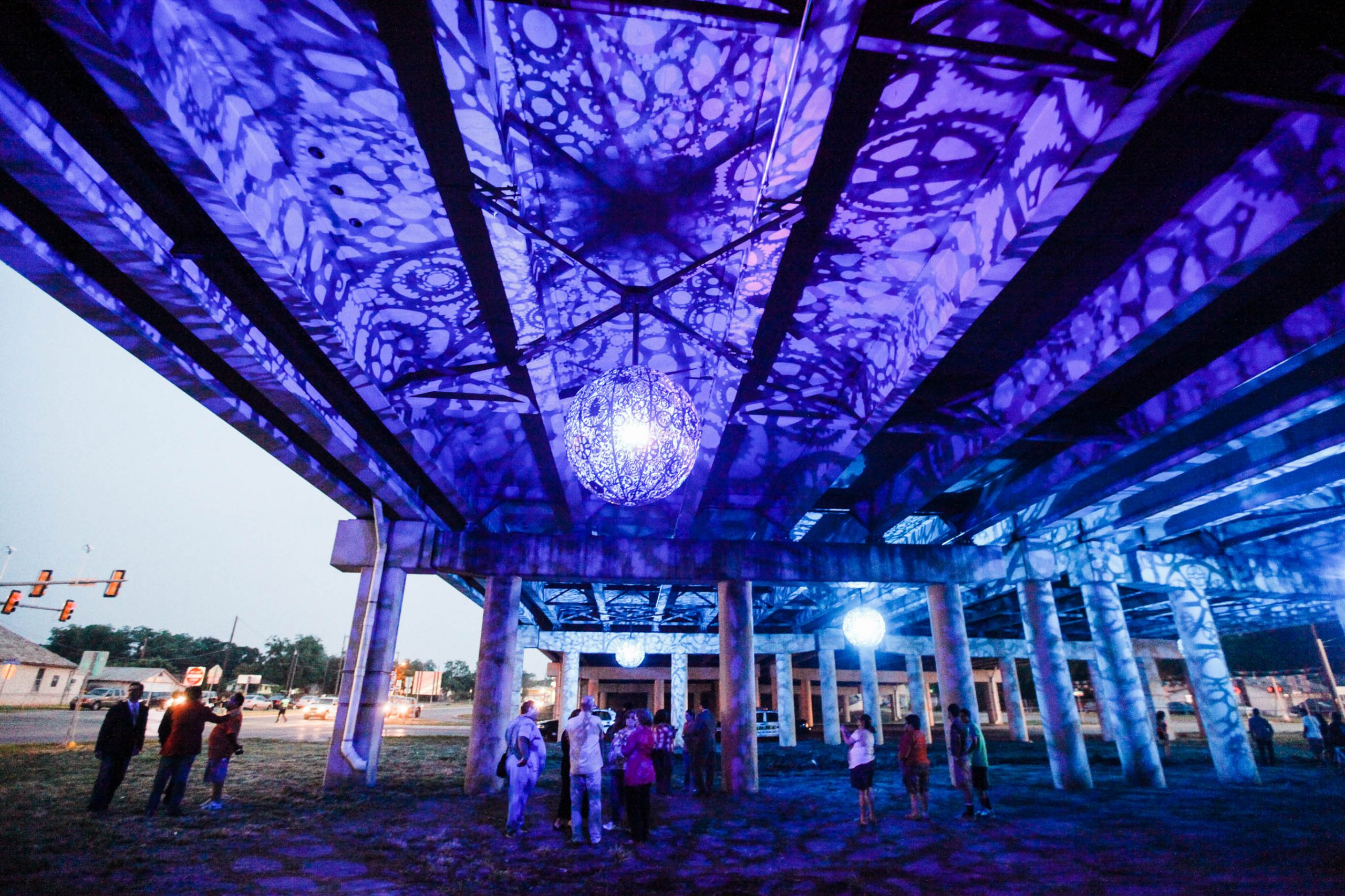 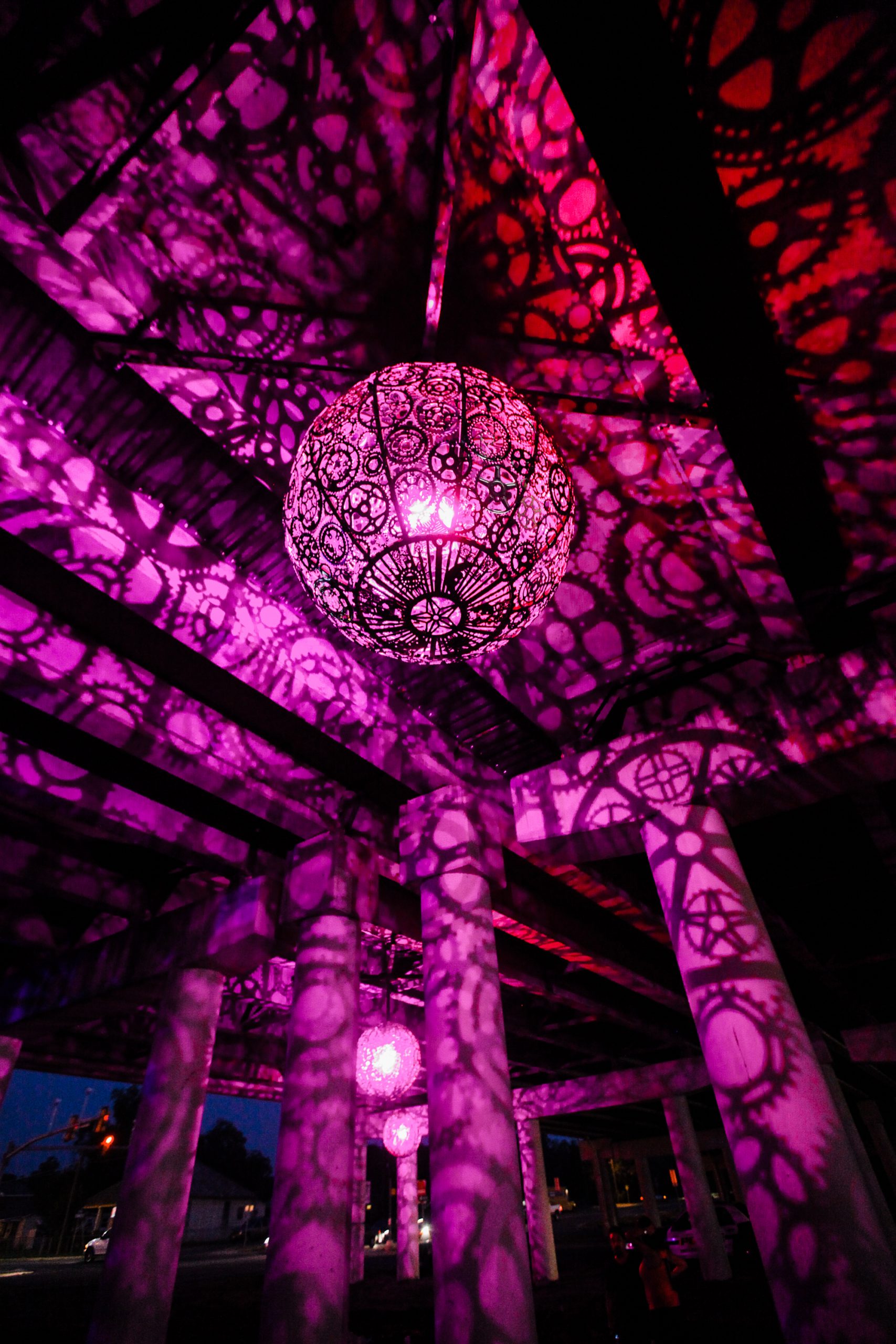 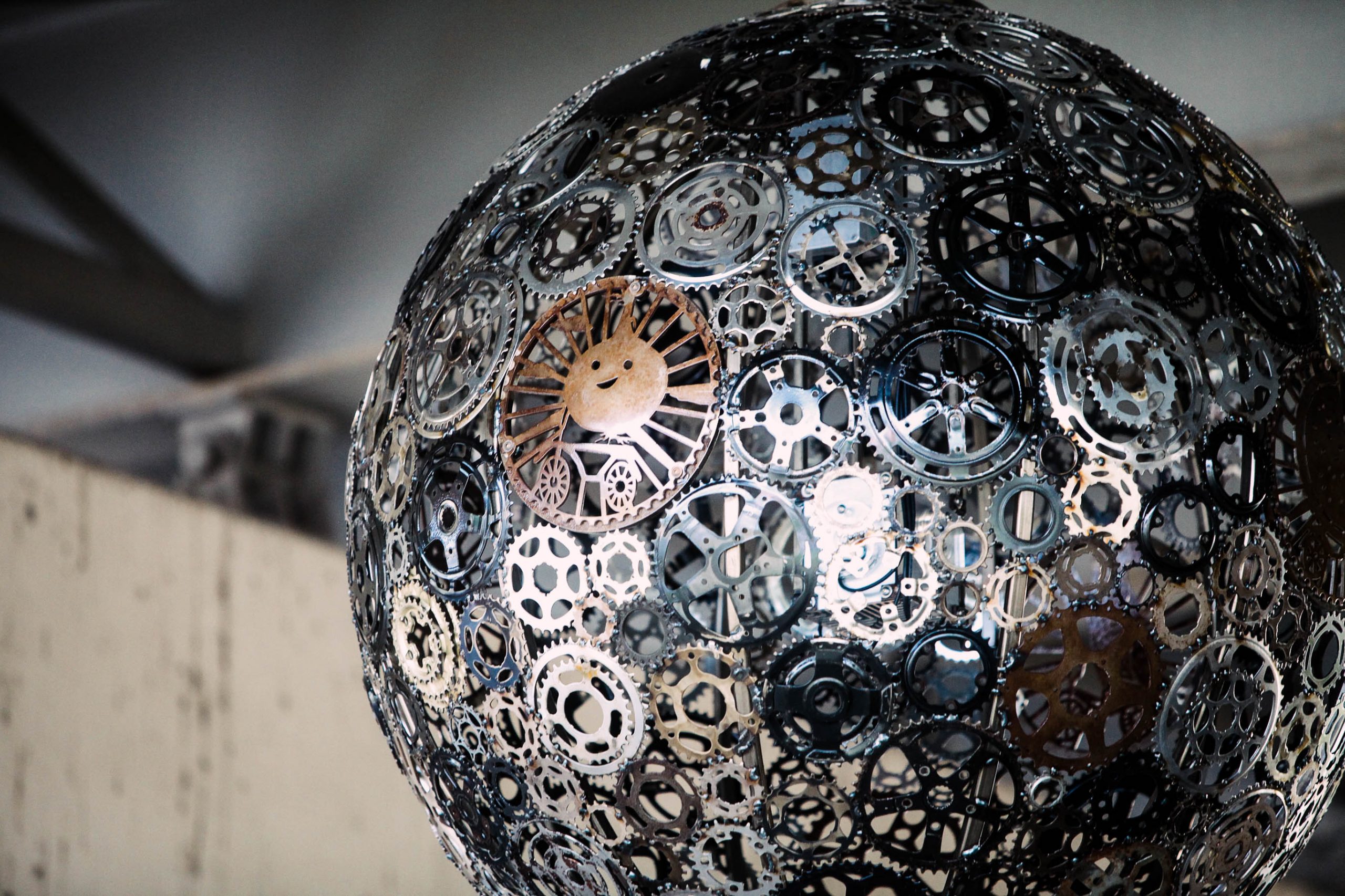 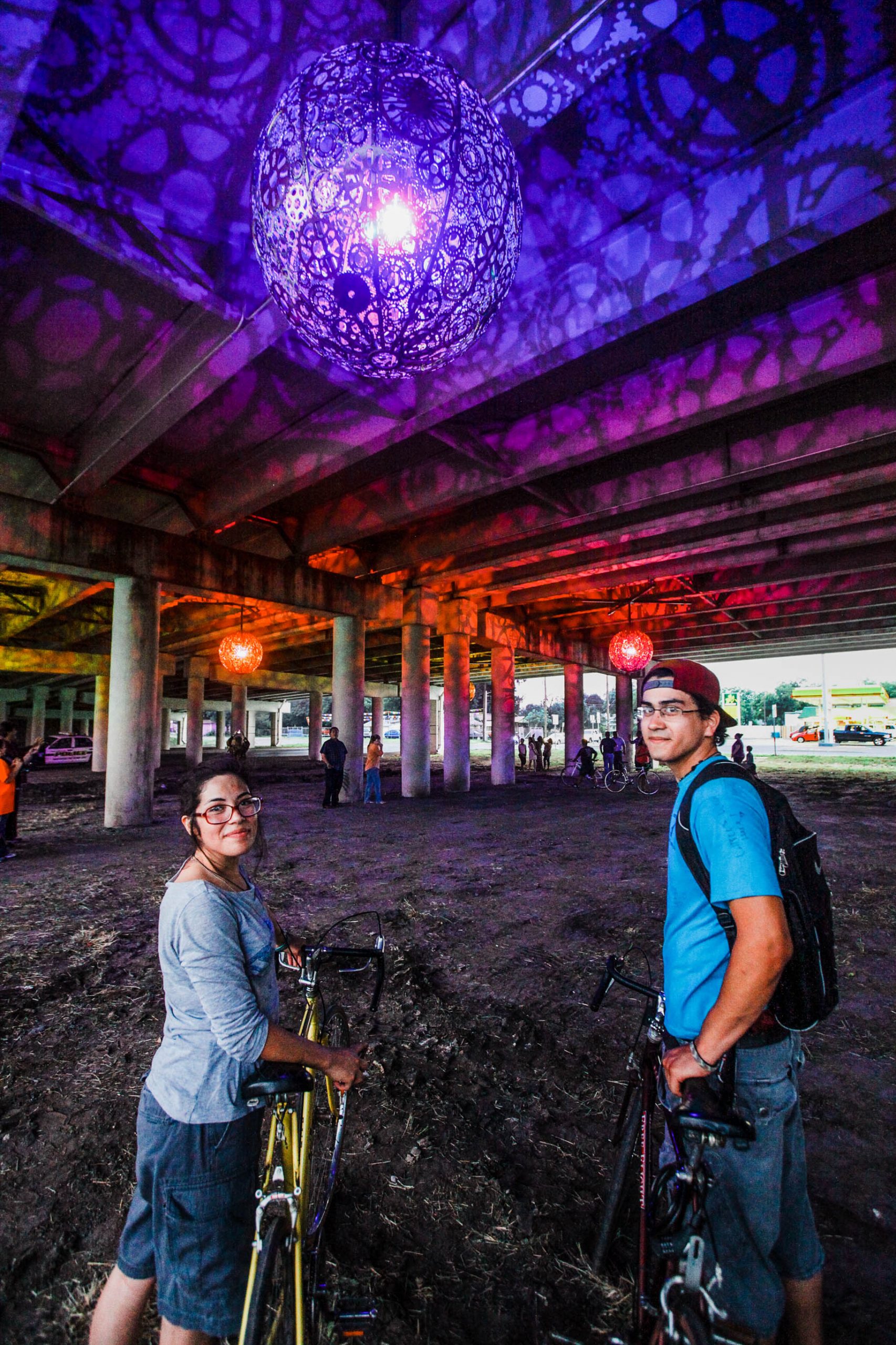 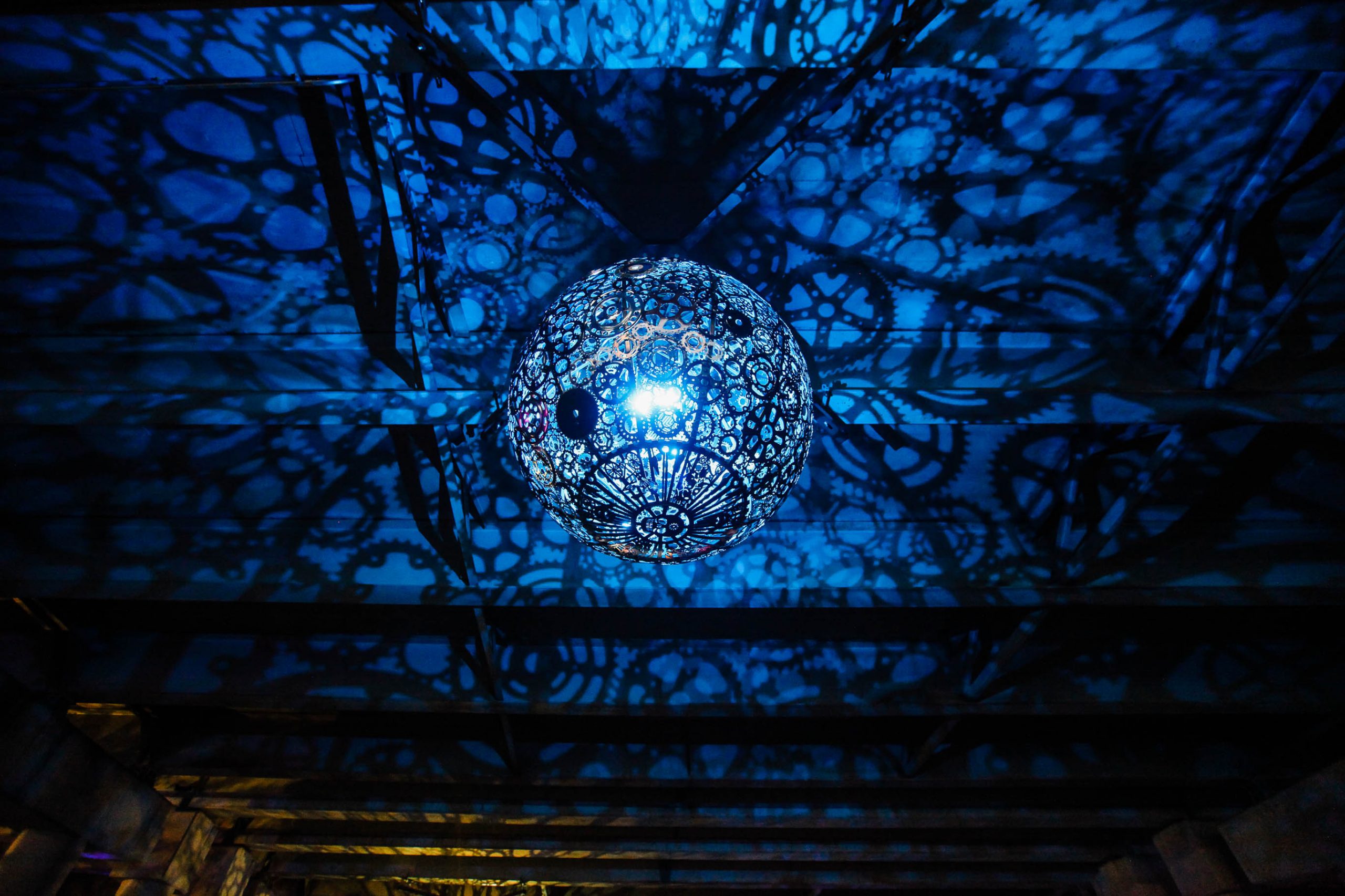 Sponsored by PASA and the City of San Antonio, Ballroom Luminoso attempts to revitalize a depressed public space and transform the urban environment in a transitional neighborhood. The installation consists of six brilliantly lit, color-changing, chandeliers. Each globe contains a custom-designed LED light fixture, which casts a pool of sharply detailed overlapping shadows approximately 40 feet in diameter. Ballroom Luminoso maximizes its aesthetic impact by altering the entire landscape instead of merely acting as objects in a field. Melding grandeur with a sense of neighborhood rejuvenation, the sculptures weld bike parts, collected from co-ops across the country into refined forms.

We strive to physically root our pieces in place, and Ballroom Luminoso was entirely inspired by a visit to the site. Drawing from the formal elegance of the freeway underpass and the cultural currents of the surrounding neighborhoods, the piece transforms a forgotten space into one that enlivens the community. The chandeliers paint the underpass with complex color patterns and ethereal lighting thereby refashioning the space into a majestic ballroom-cum-shadow theater.

Ballroom Luminoso references the area’s past, present, and future in the design of its intricately detailed medallions. The images in the medallions draw on the community’s agricultural history, strong Hispanic heritage, and burgeoning environmental movement. The medallions are a play on the iconography of La Loteria, which has become a touchstone of Hispanic culture. Utilizing traditional tropes like La Escalera (the Ladder), La Rosa (the Rose), and La Sandía (the Watermelon), the piece alludes to the neighborhood’s farming roots and horticultural achievements. Each character playfully rides a bike acting as a metaphor for the neighborhood’s environmental progress, its concurrent eco-restoration projects, and its developing cycling culture.

Ballroom Luminoso was a collaboration between artists, Joe O’Connell and Blessing Hancock, Public Art San Antonio, the Capital Improvements Management Services, the Texas Department of Transportation, Schneider Structural Engineers, and the fabrication team at Creative Machines, Inc. The project had an extremely short timeline, which actually encouraged a more streamlined process of development. The artists proposed an aesthetic concept (described above) and worked with the designers and fabricators at Creative Machines to manifest their vision. The city and state had concerns regarding hanging the pieces from the bridge’s infrastructure and whether the lighting could result in driving hazards. These issues were resolved by clamping onto I-Beams instead of drilling or welding to attach the structure and, the lighting program was adjusted to avoid colors, which could be mistaken for traffic lighting.