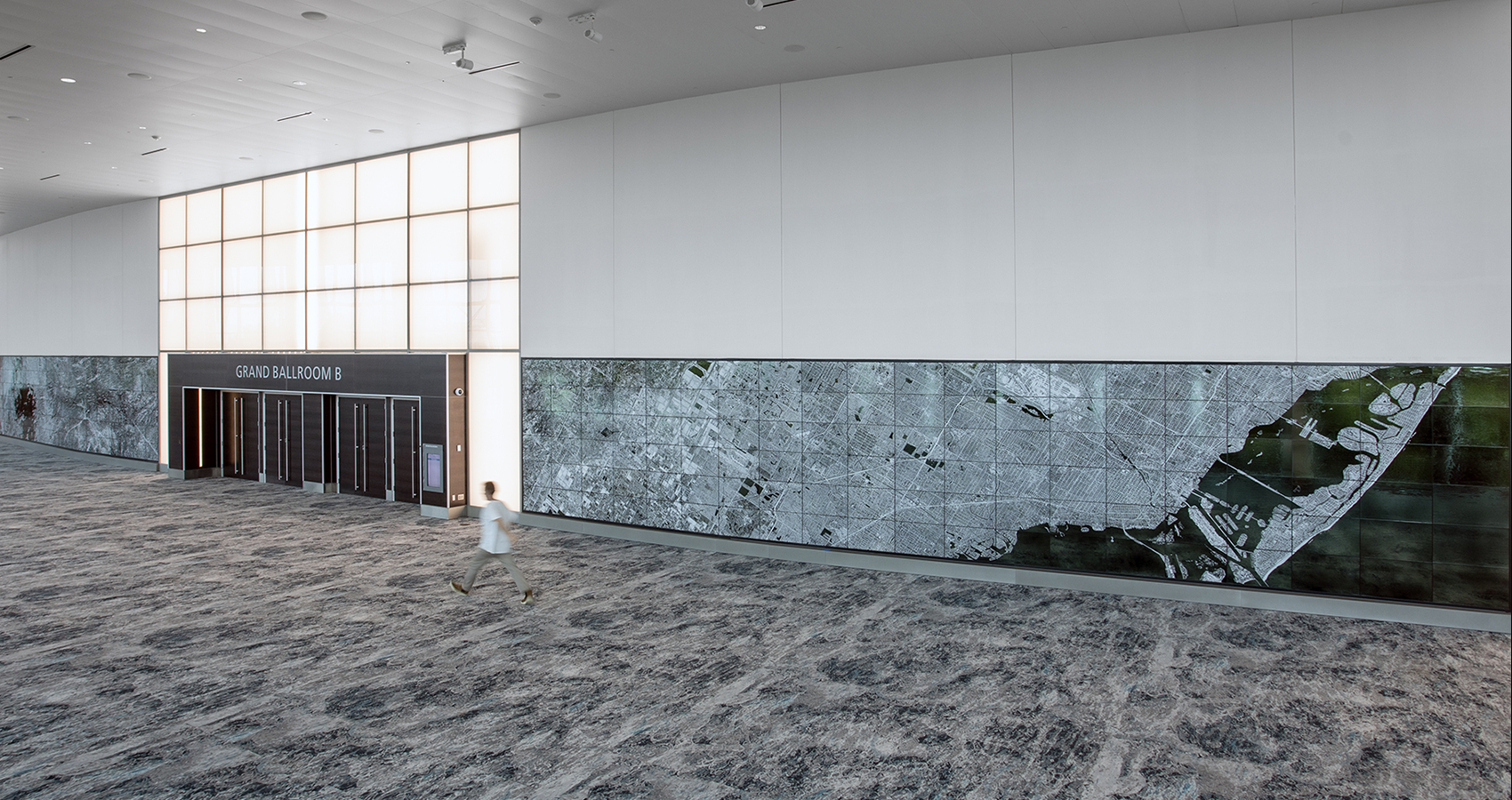 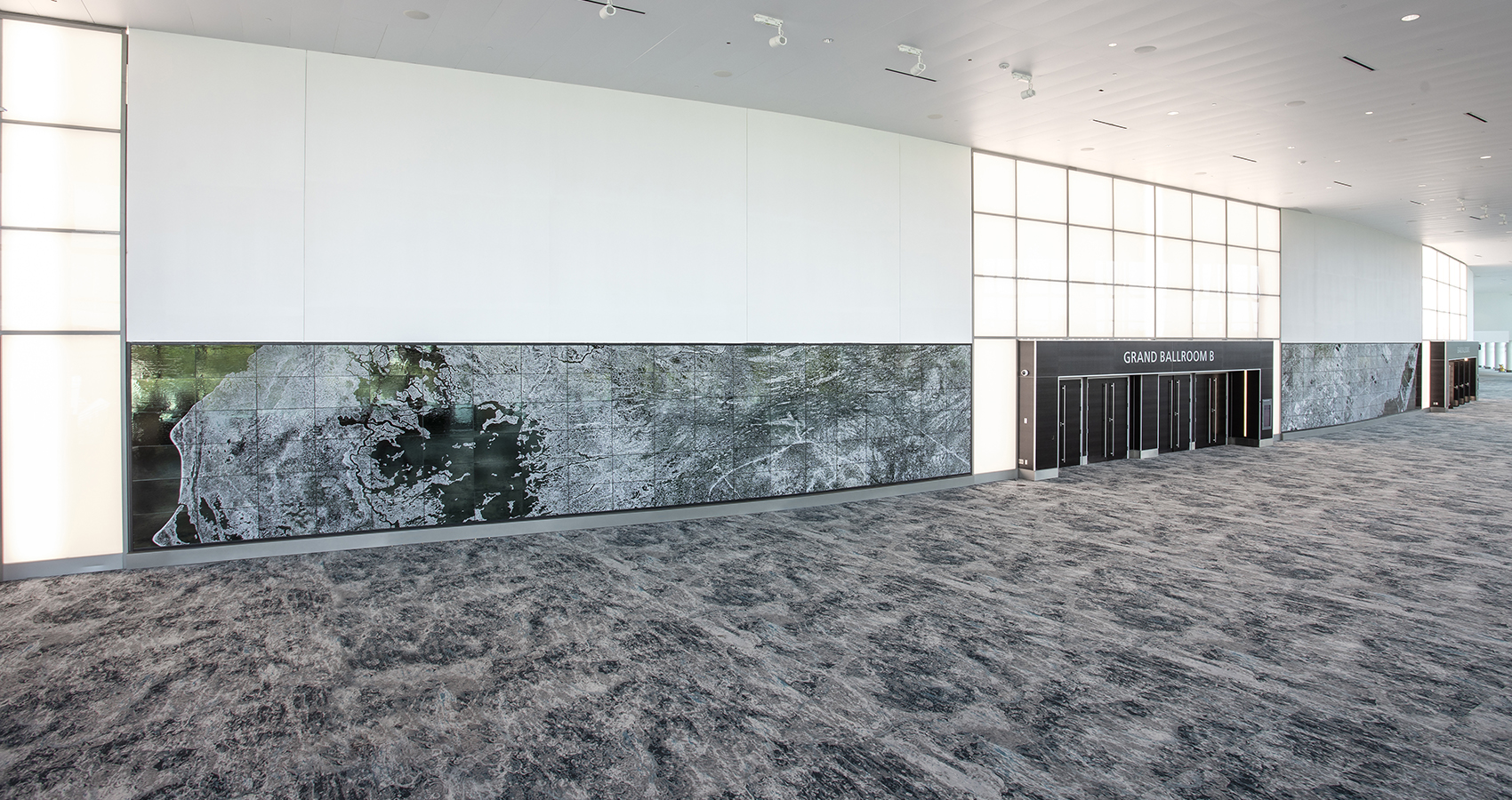 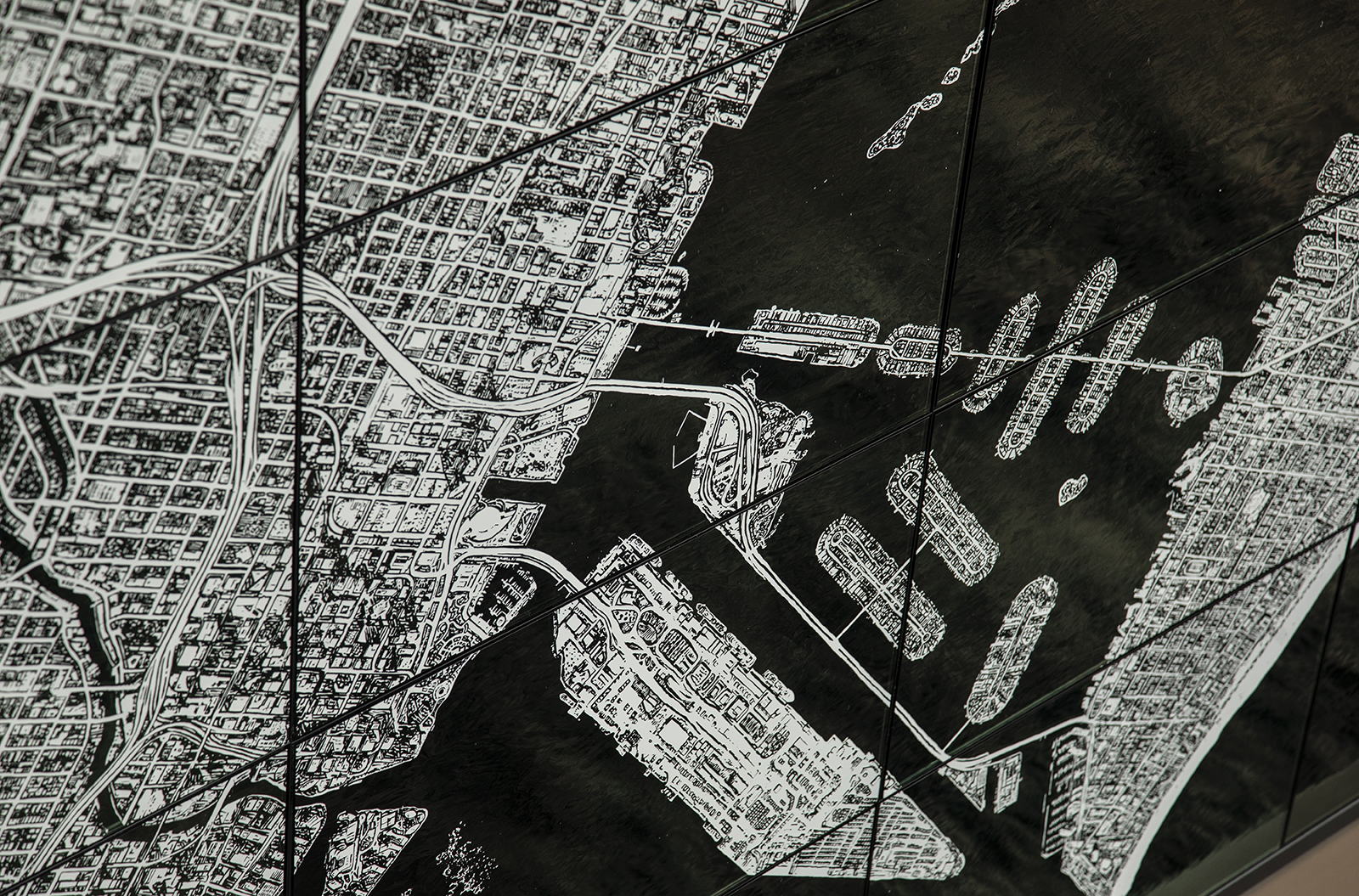 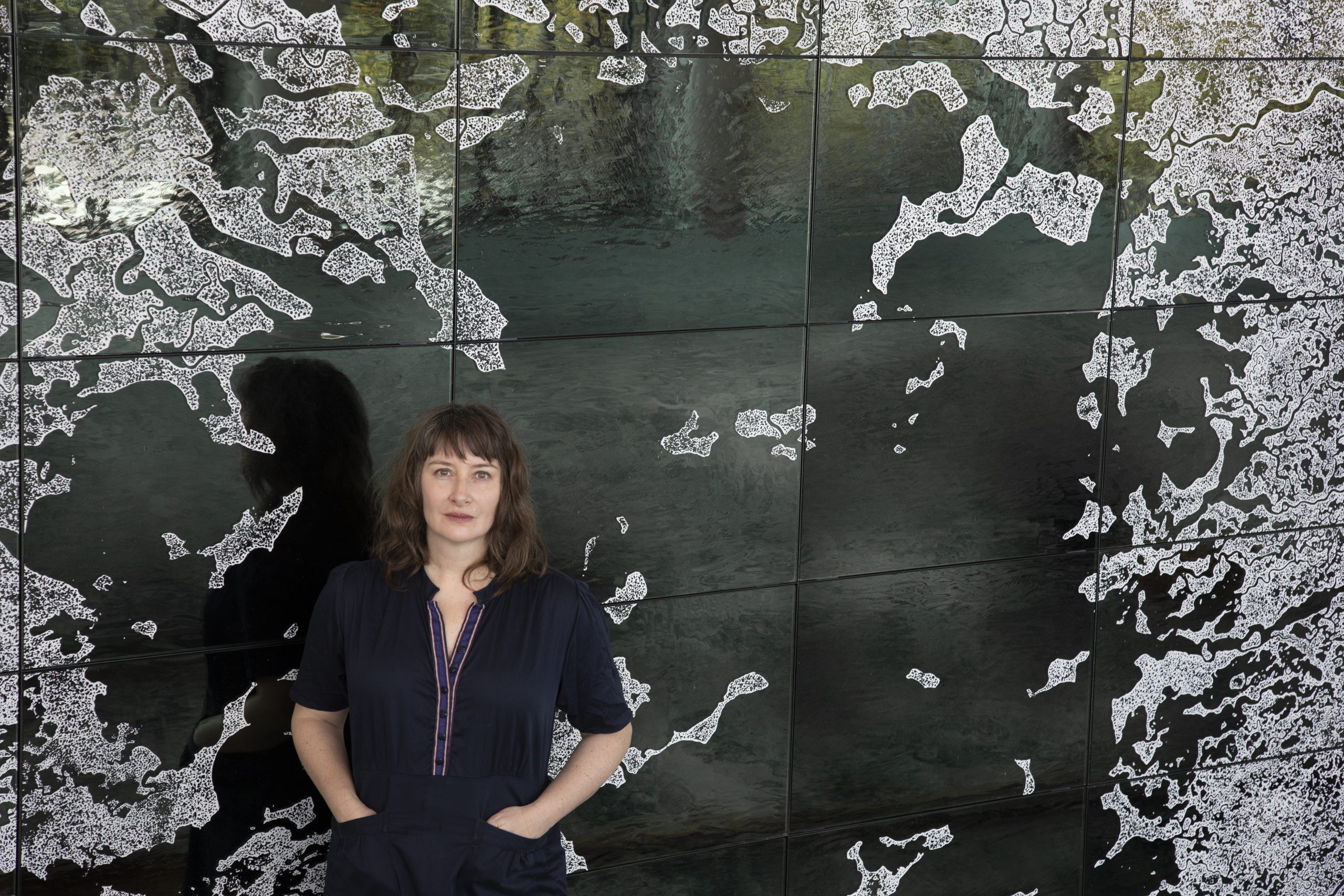 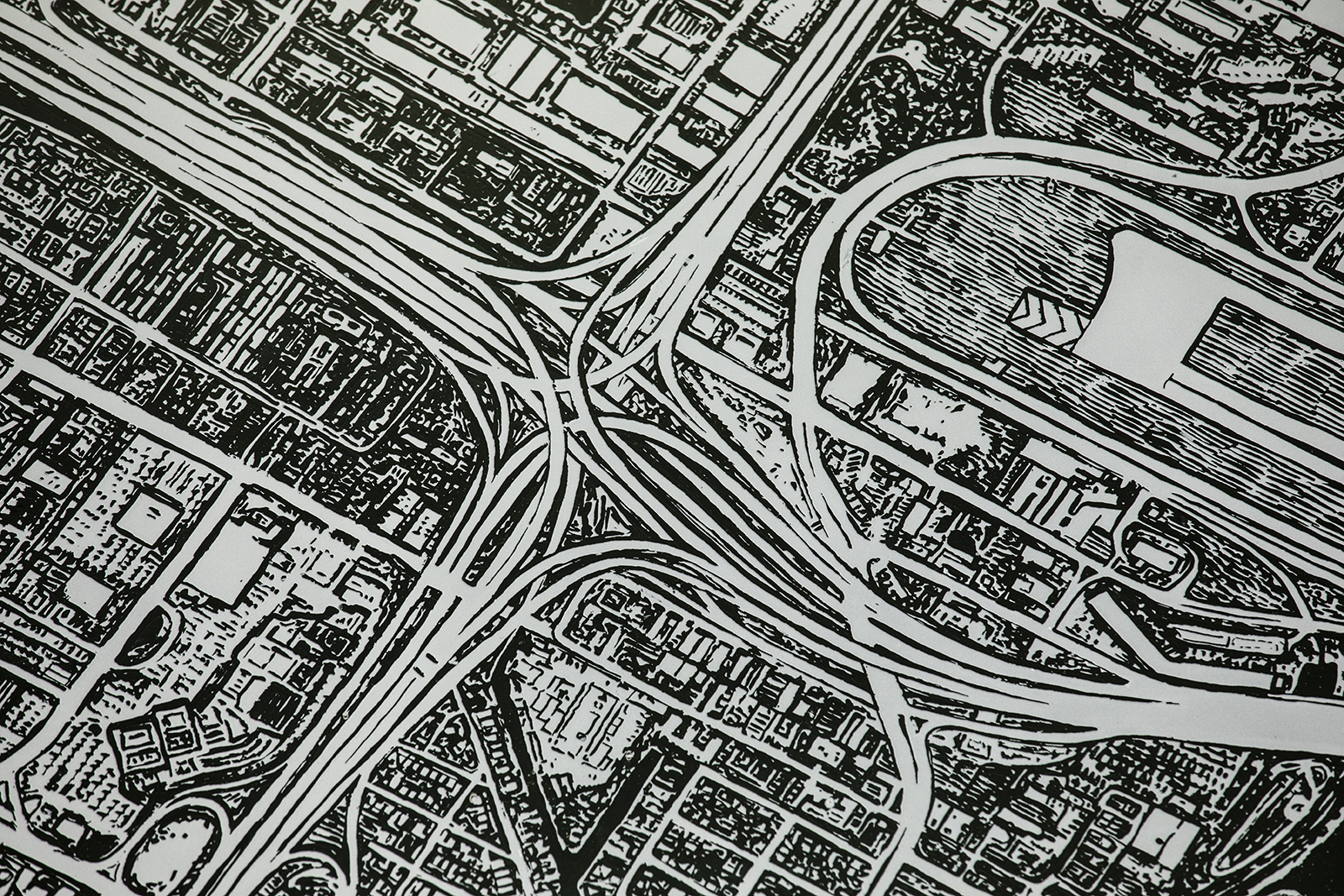 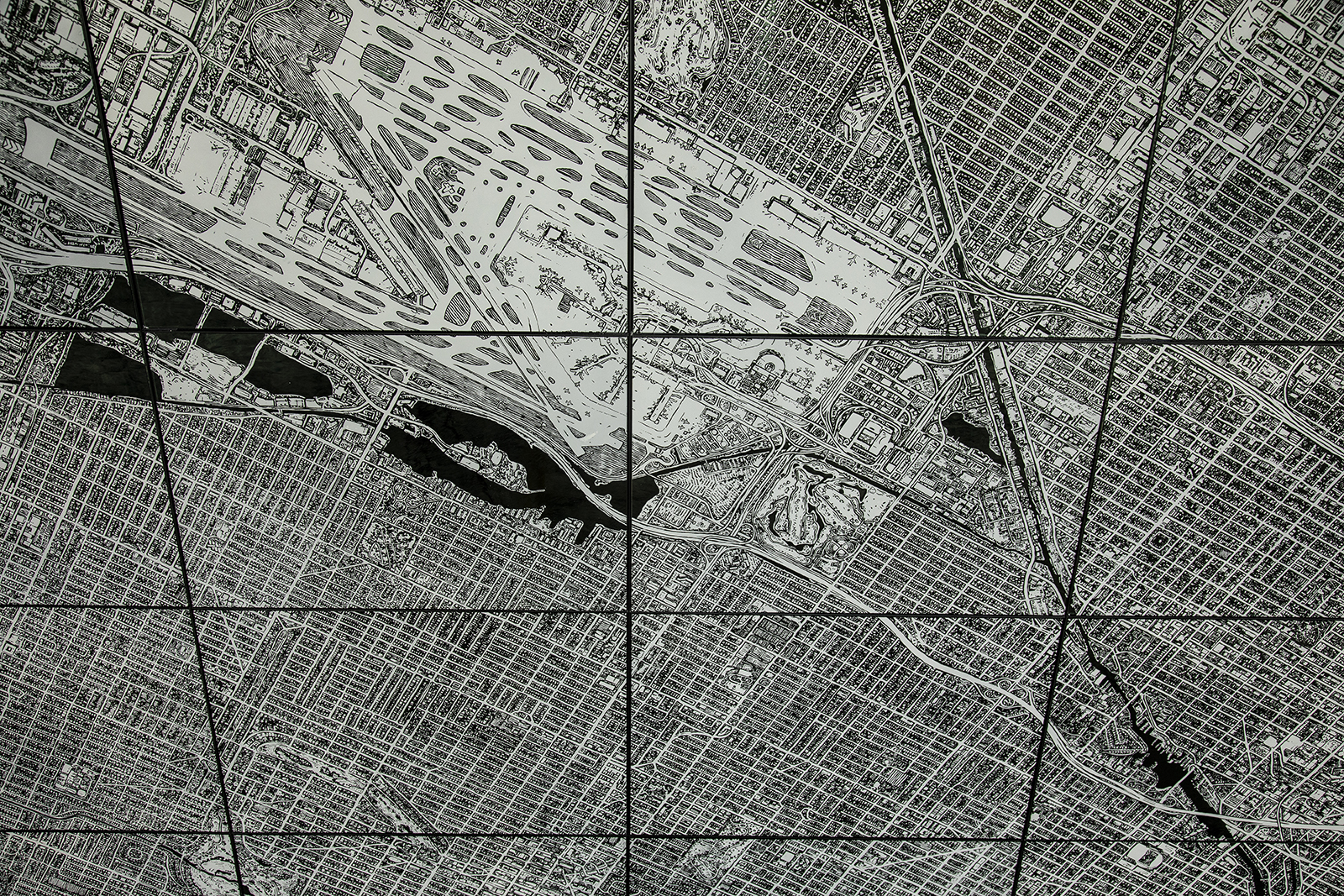 Produced with a municipally-funded percent-for-art contribution of $7 million, the initiative collectively represents the largest municipal project of its kind to be installed in the United States. After a rigorous selection process that began with 524 applicants. the six chosen artists began fabrication processes that lasted up to 18 months. The works are thoughtfully integrated throughout the new Convention Center so that they play off each other as well as the architectural space. Ellen Harvey’s, “Atlantis” is directly inspired by Miami Beach’s unique connection to the many bodies of water that constitute the larger Florida ecosystem.

Based on a full-size hand-painted design that took the artist over a year to produce, Atlantis is directly inspired by Miami Beach’s inherent connection to the many bodies of water that constitute the larger Florida ecosystem. Visitors to the Miami Beach Convention Center see themselves reflected in a dark watery 1,000 sq. ft. satellite view of Florida reaching from the Bay of Biscayne through the great watershed of the Everglades to Miami Beach and the Atlantic Ocean. As the light changes, the image appears to float above and then be subsumed by the watery reflections, mimicking the intimate relationship between the city and the water table. The mirror is divided into two sections so that visitors enter the new Grand Ballroom at the intersection between the man-made and the natural landscape -- at the border between the Everglades National Park and the outskirts of Miami. Originally inspired by a visit to the Everglades with the Everglades Foundation and Creative Time, Atlantis allows visitors to situate themselves within the larger landscape, providing a poignant and thought-provoking overview of the natural beauties that make Miami Beach such a seductive destination. natural beauties that make Miami Beach such a seductive destination.

Mayer of Munich fabricated this massive hand-painted mural by then sand-blasting the mouth-blown glass, filling with ceramic melting color and subsequently laminating to float glass mirror. There are 240 glass panels, each approx. 20 x 30”, overall 10 ‘ 2 9/16” x 104’. Harvey says " I was really struck by this disconnect between natural Florida and man-made Florida. And I'd always thought the thing that makes Miami Beach special is this relationship between the urban environment and the water."[Excerpted from CULTURED magazine, article by Daniel Kunitz, August 2017.]

Ellen Harvey is a British-born artist living and working in Brooklyn. She is a 2016 recipient of a John Simon Guggenheim Memorial Fellowship in the Visual Arts. She has exhibited extensively in the U.S. and internationally. She has completed public artworks for New York Percent for Art, New York Arts in Transit, the Chicago Transit Authority, the Philadelphia International Airport, the Federal Art in Architecture program and the Flemish National Architect. She is represented by Danese / Corey Gallery in New York and Locks Gallery in Philadelphia among others.