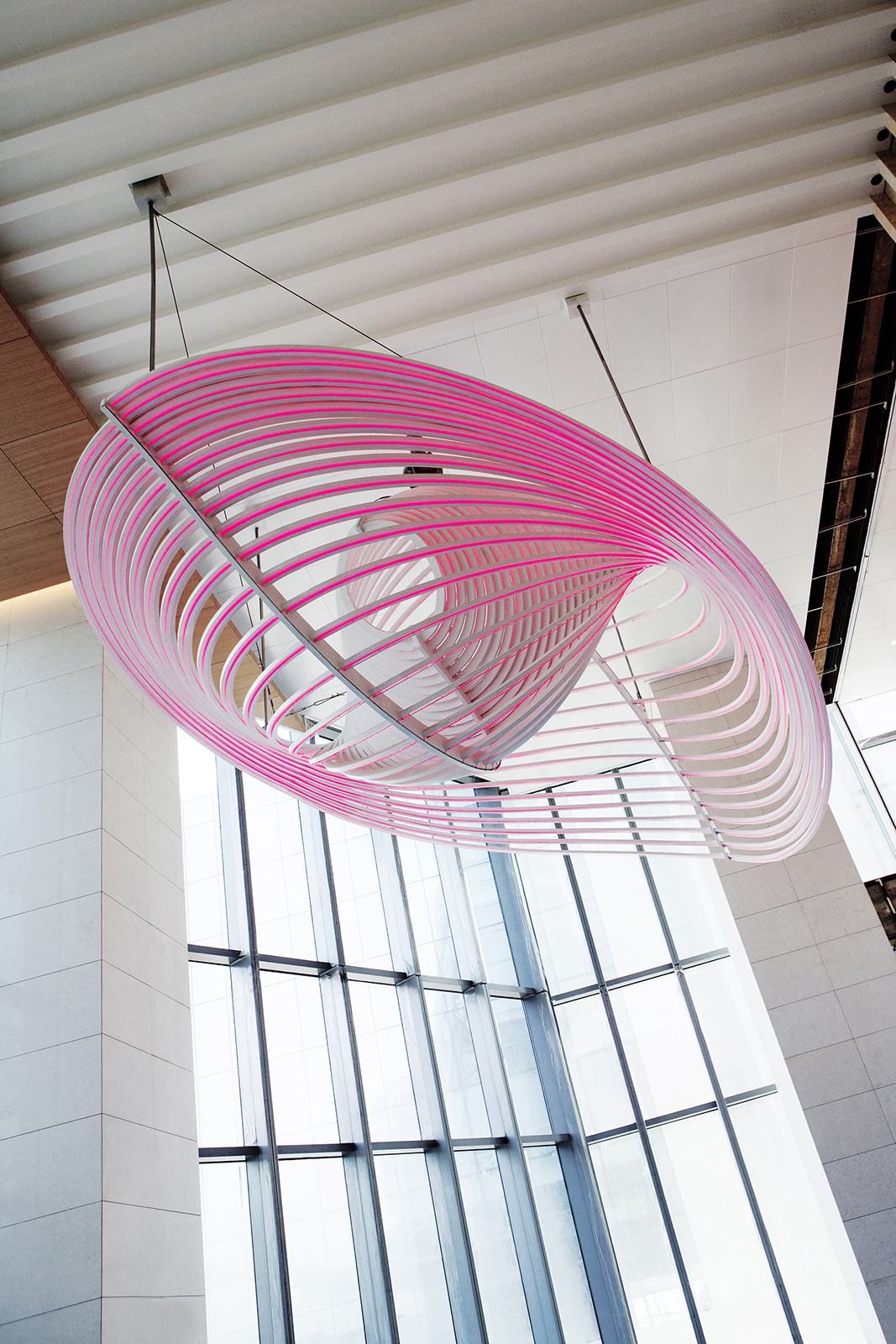 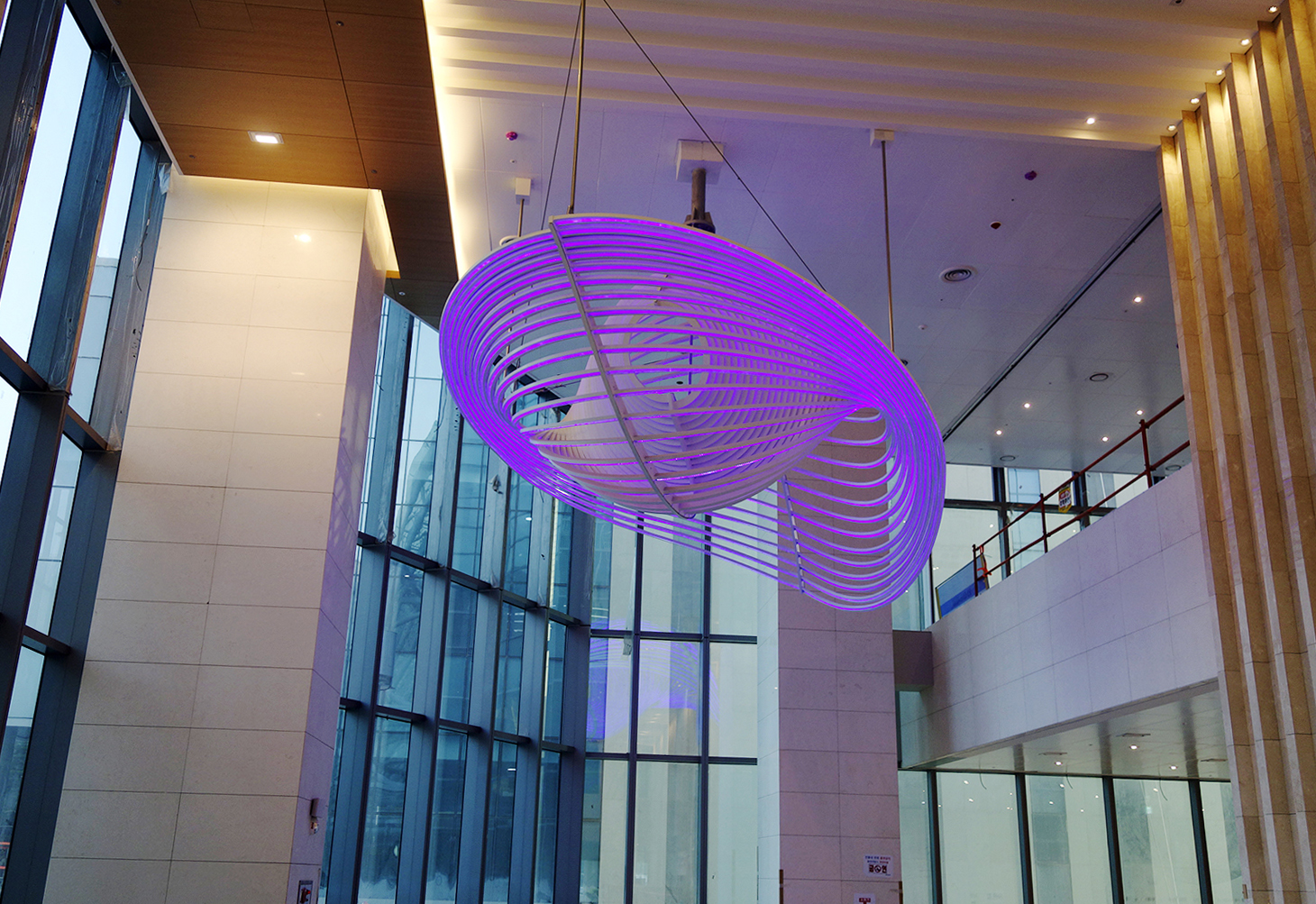 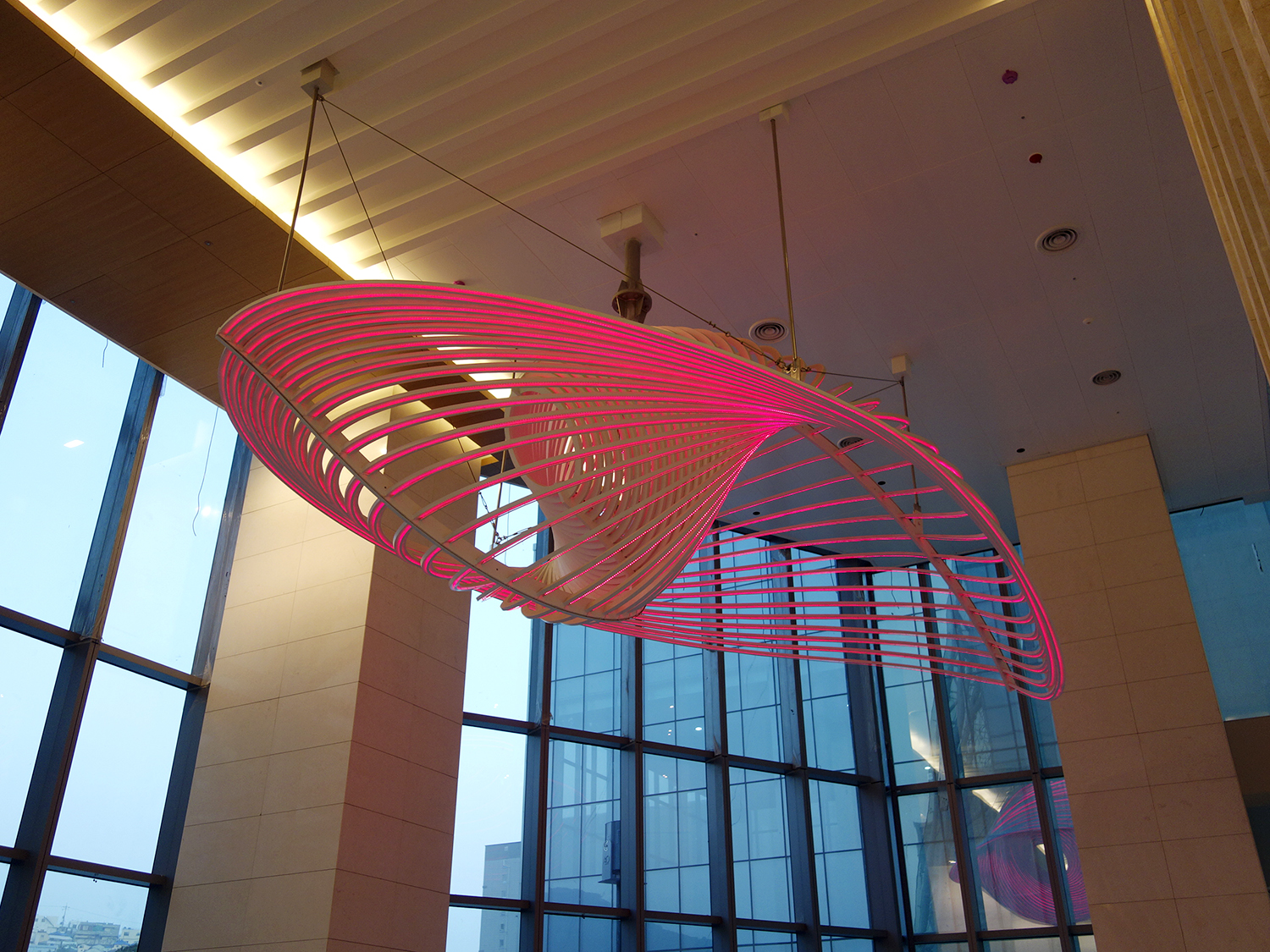 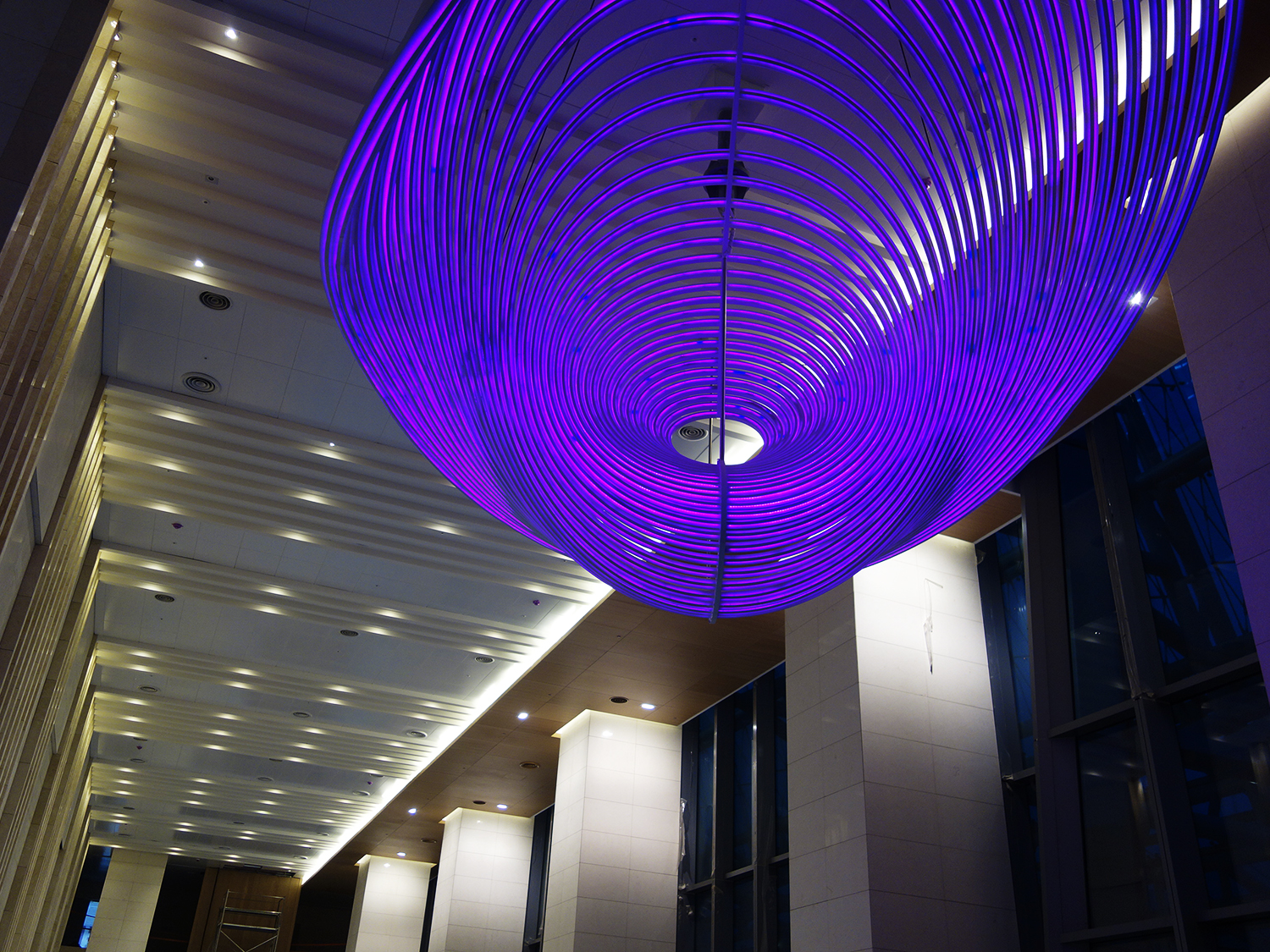 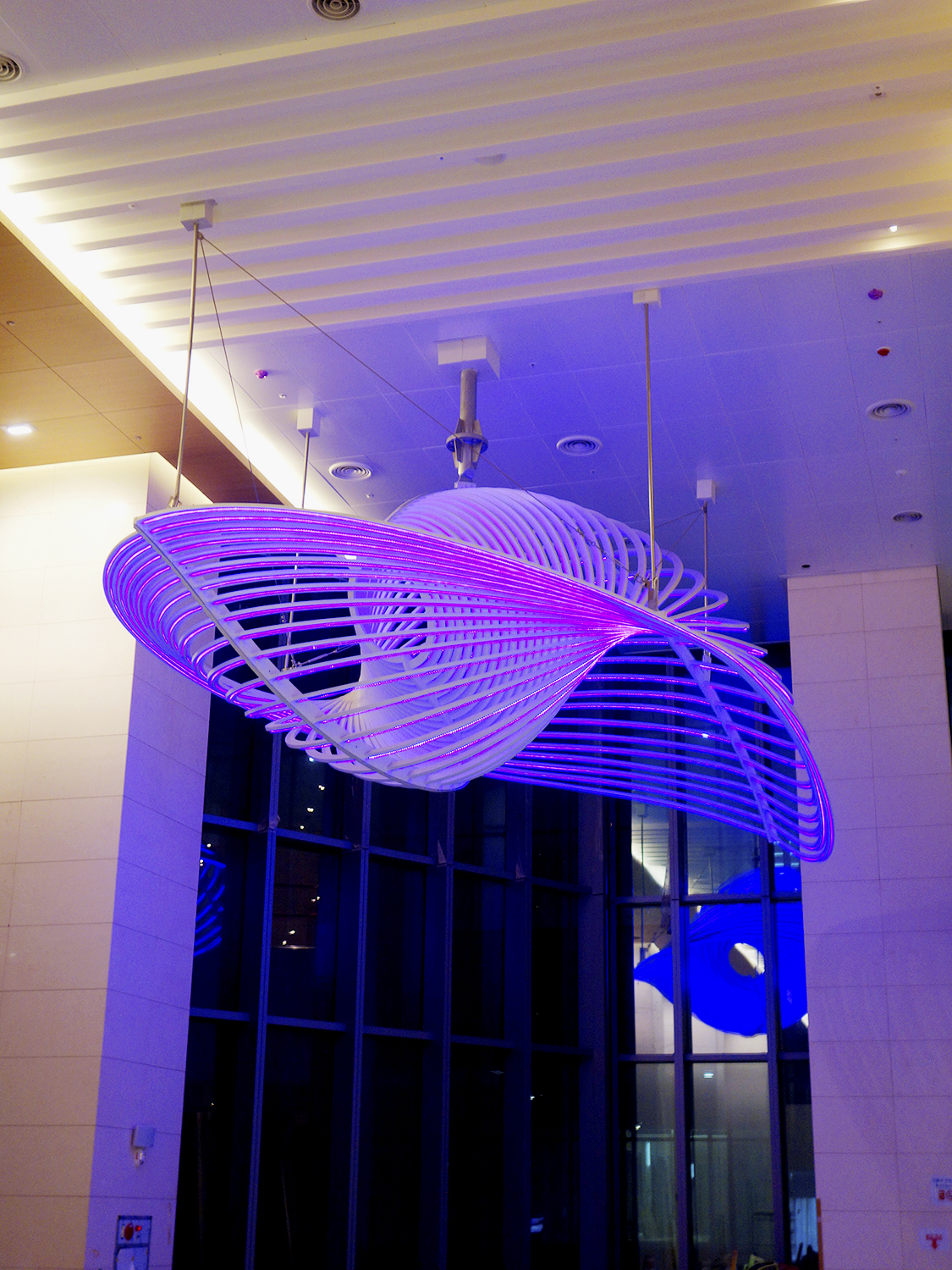 Title: Point-Amusement of Space Material: Stainless Steel, white painting, LED Lighting Size: 26.25 x 14.76 x 9.35 ft Weight: 2.75 tons As a symbol of financial center of Northeast Asia, the sculpture represents Busan’s icon, by its curved shape manifesting the free movements in the Pacific Ocean. Considering this cutting edge architecture of Busan International Finance Center and its horizontality and verticality, the sculpture design makes the space pleasant through repetitive organic curves yet geometrical, to be in a Nature-friendly harmony with its geographical specificity. The stainless steel and the LED lighting emphasize the visual dynamism and the geniality.

A public architecture for a government agency can easily become rigid and prosaic. By installing an artwork producing a flexible space in this type of architecture, people can be emotionally more comfortable inside.
The results of this installation would not only increase the productivity, but also could be considered as an element that respects the human rights of the workers by providing the opportunity for users to rest and recover spiritually.

In terms of the design, the architectural space being rather rigid and prosaic by its vertical and horizontal elements, the attempt was to bring more dynamism and variation in order to make a space with vitality. Indeed the curves and the LED lightings are installed in the way that they interfere with the existing building shape that is straight, which in the end create a renewed space with more fluidity.

The artist designed the artwork on computer using a 3D program, and the structure calculation for execution was done by a company specialized in structure engineering (Wooee Building Structure Safety Technique), as well as the planning (attached document 1). The lighting was planned and installed with a lighting company (Aiming Lighting) after deliberation.
The production and the installation of the artwork were ensured by a production team, under the supervision of the artist.

The work of suspending an artwork of 2.75 tons in total engendered important security concerns while preserving the creativity in its function of lighting. In particular, considering the load of the sculpture, the most difficult and fastidious part laid in the complexity in installing the H beam in the finishing membrane of the ceiling, and particularly in electric wiring due to the lighting system. Personally, I wish there were not the cable line ensuring the balance, which on the formal characters of the work I regret that they must be present due to the security system.