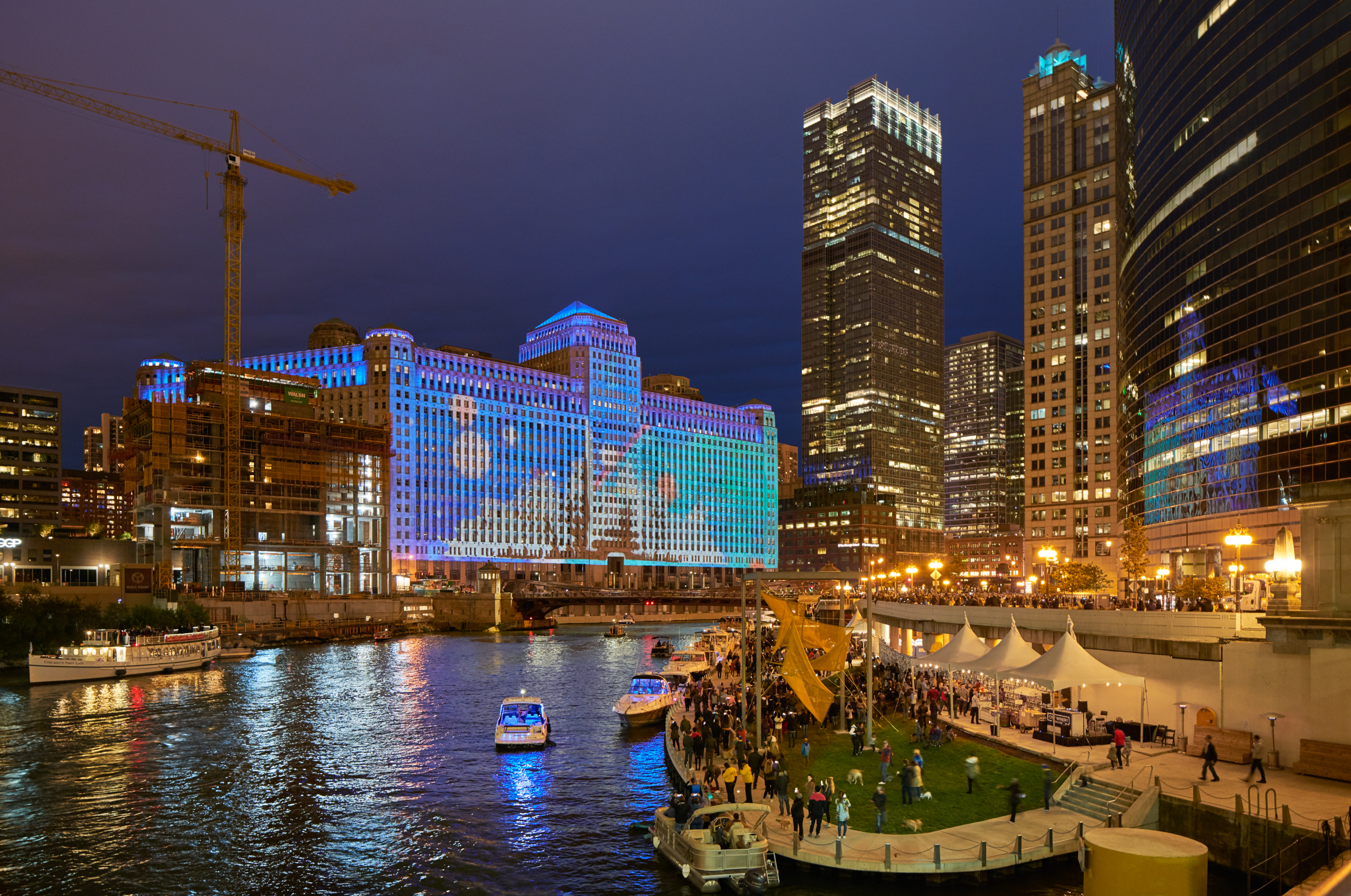 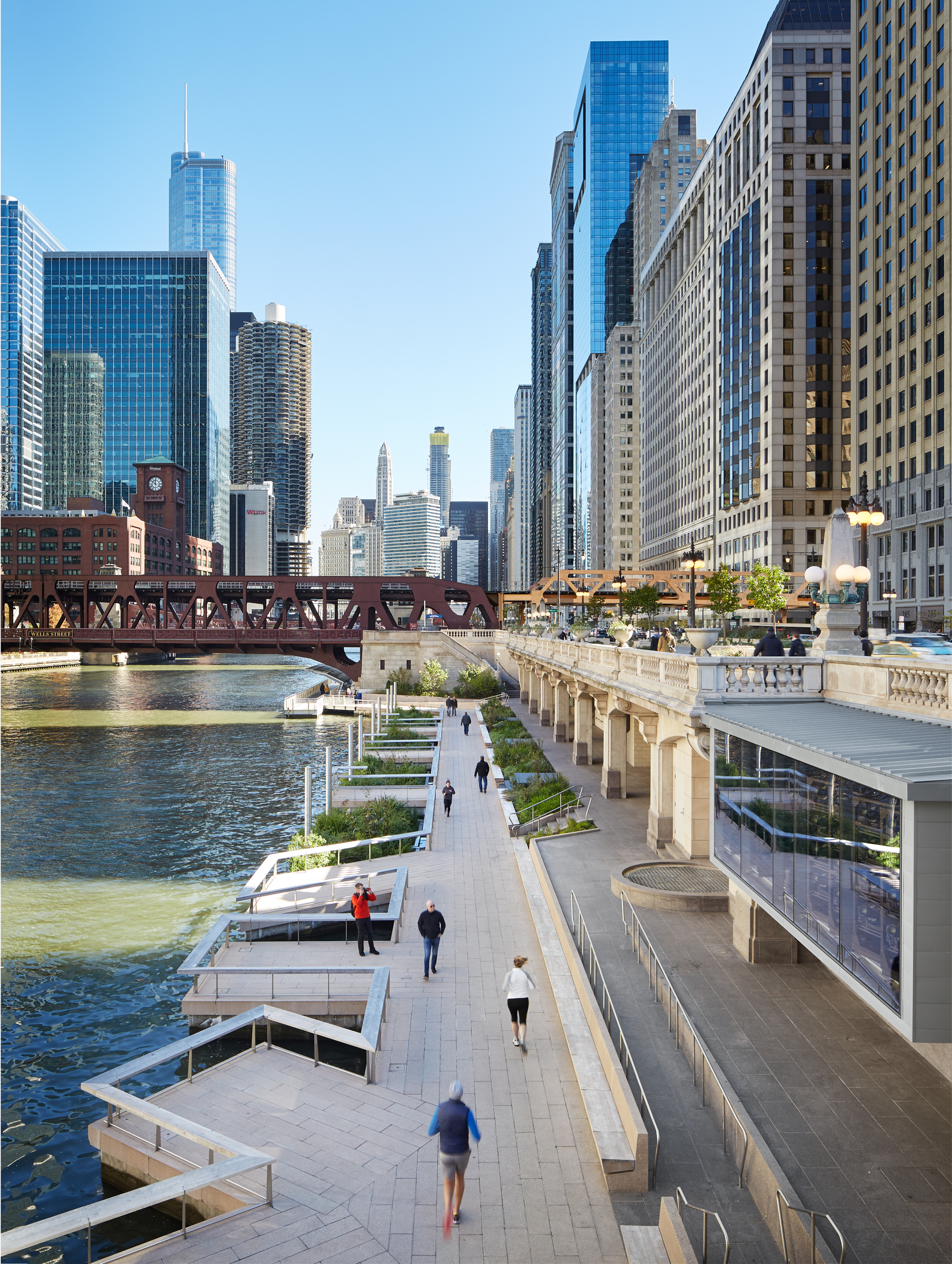 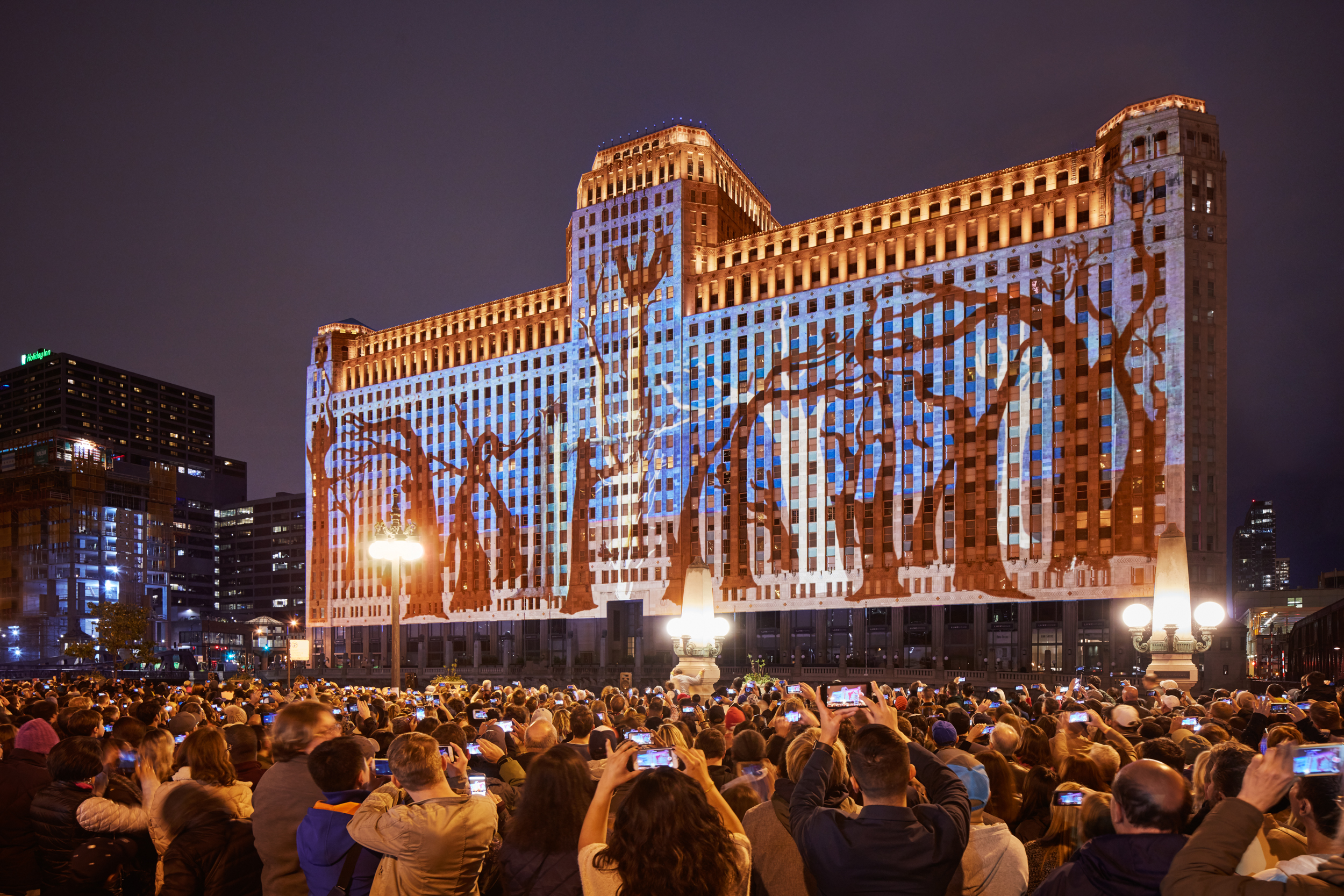 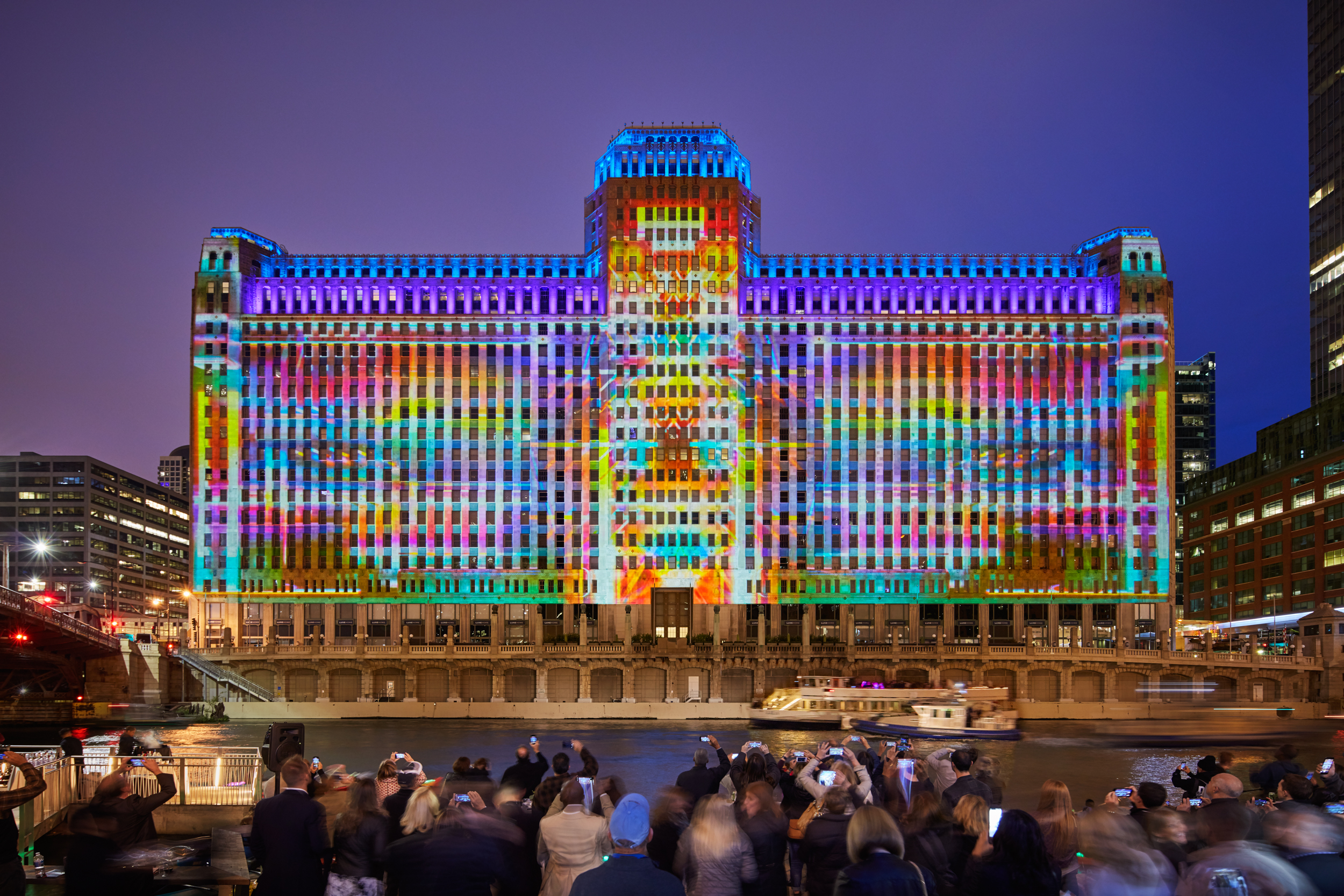 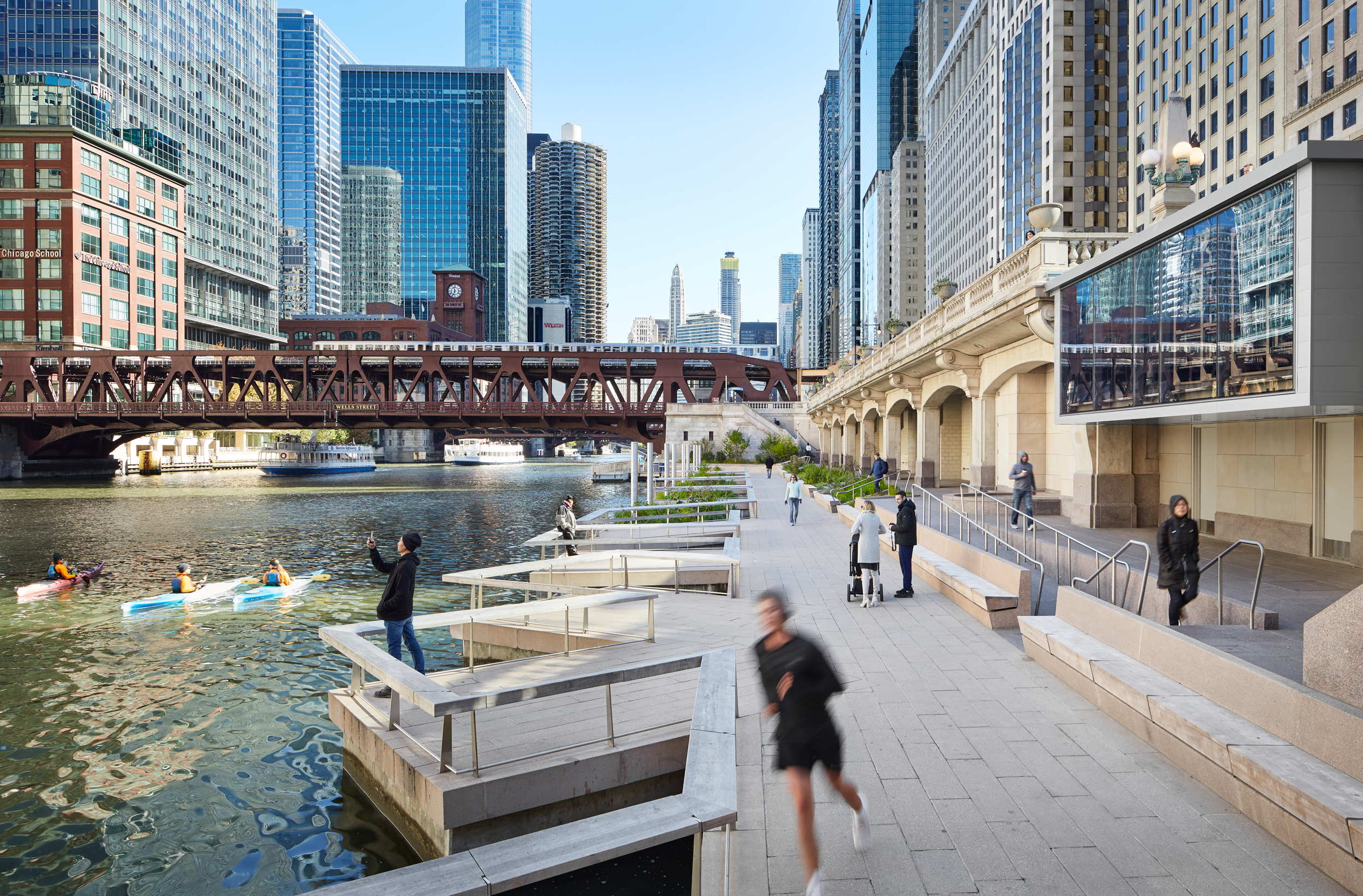 Using a software-driven platform, theMART will curate an ongoing exhibition of imagery from celebrated artists, allowing the ongoing spectacle to be fresh, timely, and engaging. This one-of-a-kind project will feature two-hour projection shows give nights a week, 10 months of the year for 30 years.

The project aims to transform the Merchandise Mart’s facade into a 2.5-acre canvas for digital art. theMART will continue to curate an ongoing exhibition of imagery from celebrated artists, allowing the ongoing spectacle to be fresh, timely, and engaging. This one-of-a-kind project features two-hour projection shows five nights a week, 10 months of the year for 30 years.

One of the challenges the project presented was finding an adequate place to house the projectors by the Chicago Riverwalk. After exploring various options, the team settled on using an inlet by the foot of the N Orleans St bridge across the river from theMart. Its minimal rectangular shape cantilevers above the walkway, leaving its top face neatly tucked below the balustrade on Upper Wacker Drive. The enclosure’s first floor holds the servers and other associated equipment. On the second floor, the 34 projectors are stacked on moveable steel frames that slide back to allow maintenance personnel to access the area.

The projector booth has been designed to disappear from view, allowing the artwork to be the sole focus of attention during nightly shows.

The team installed 34 Christie Digital Boxer projectors, which emit 30,000 lumens each. This number allows for a small contingency, so that the projection could continue if one were to fail. Using advanced mapping techniques, they developed software that would digitally mask out the windows so that light would only shine on the mart’s stone cladding, and not on the building’s glazing.

Available space was limited, so rather than using large refrigeration units to regulate temperature, the team opted for individual ducts that attach to each projector to exhaust hot air. The projectors themselves have a high operating heat tolerance, and since the equipment is controlled remotely, the room’s ambient temperature can safely reach 90 degrees. Toward the exterior, the enclosure’s glazed front avoids condensation through double layering and uses low iron glass to preserve the color of the artwork. The projector room is comprised of thick steel members that support heavy equipment loads and also reduce vibrations from nearby traffic on upper and lower Wacker. Its premium zinc cladding will develop a patina over time, transforming from a silvery color to a nickel gray, allowing it to blend with its surroundings.