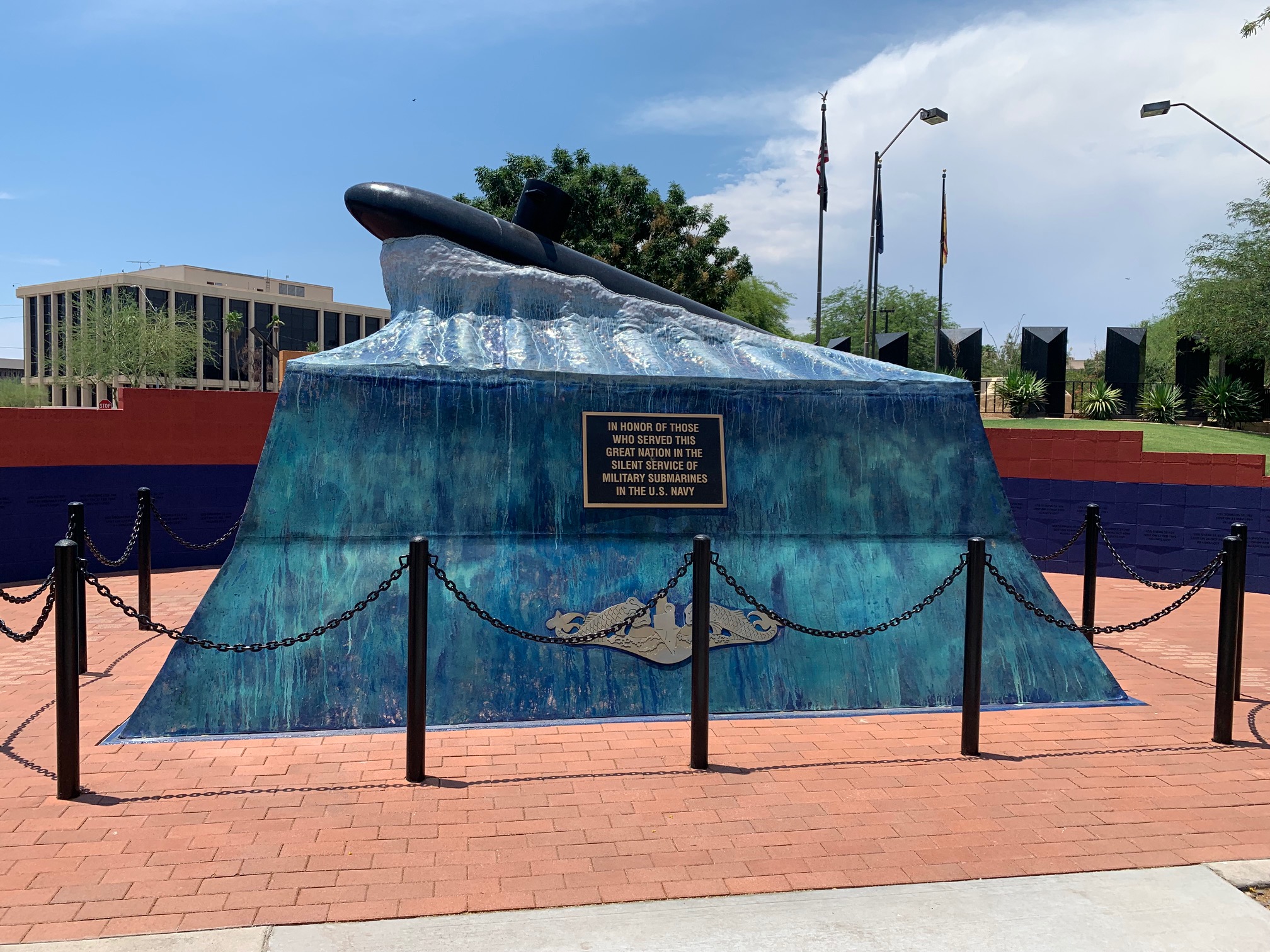 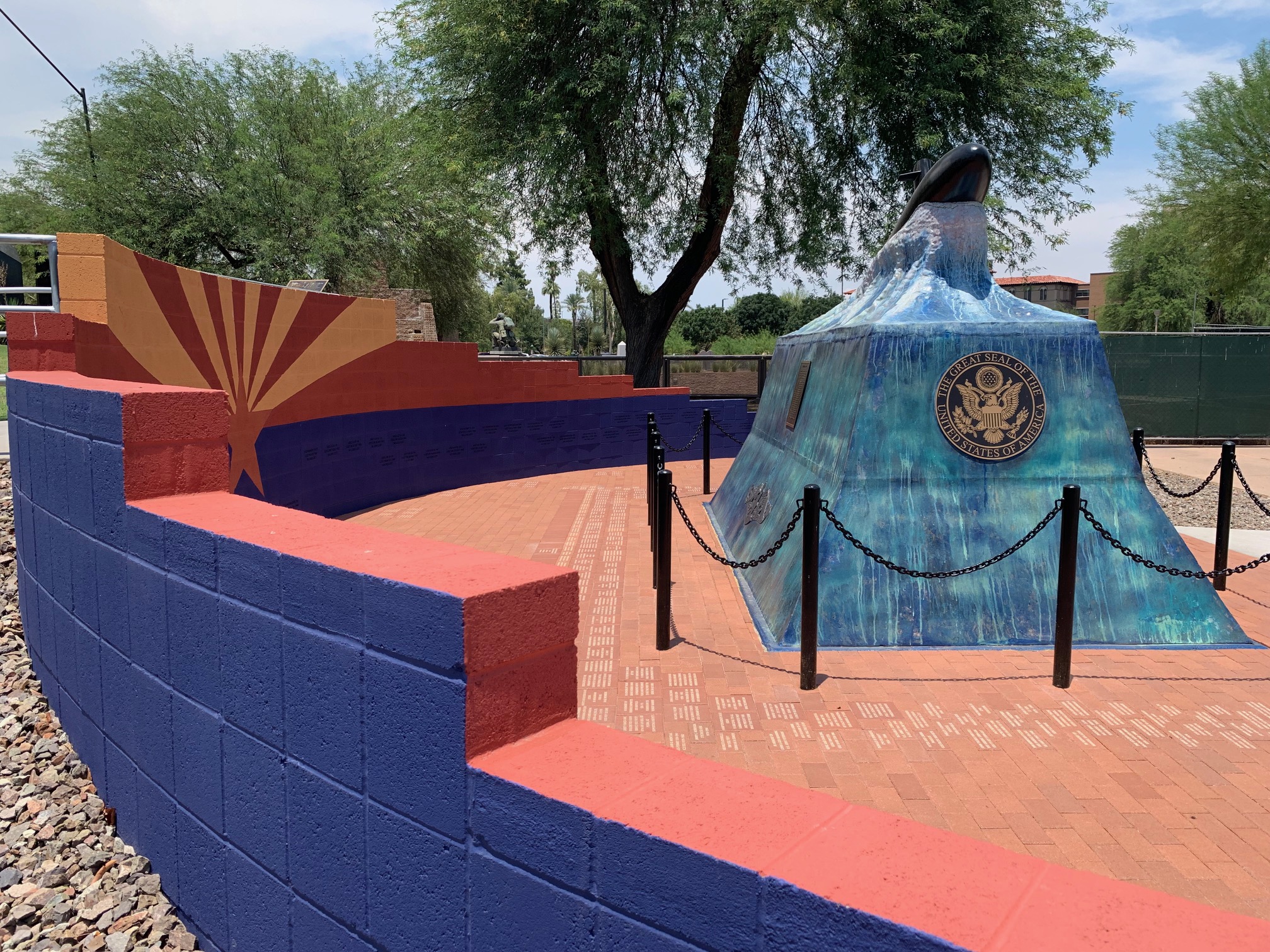 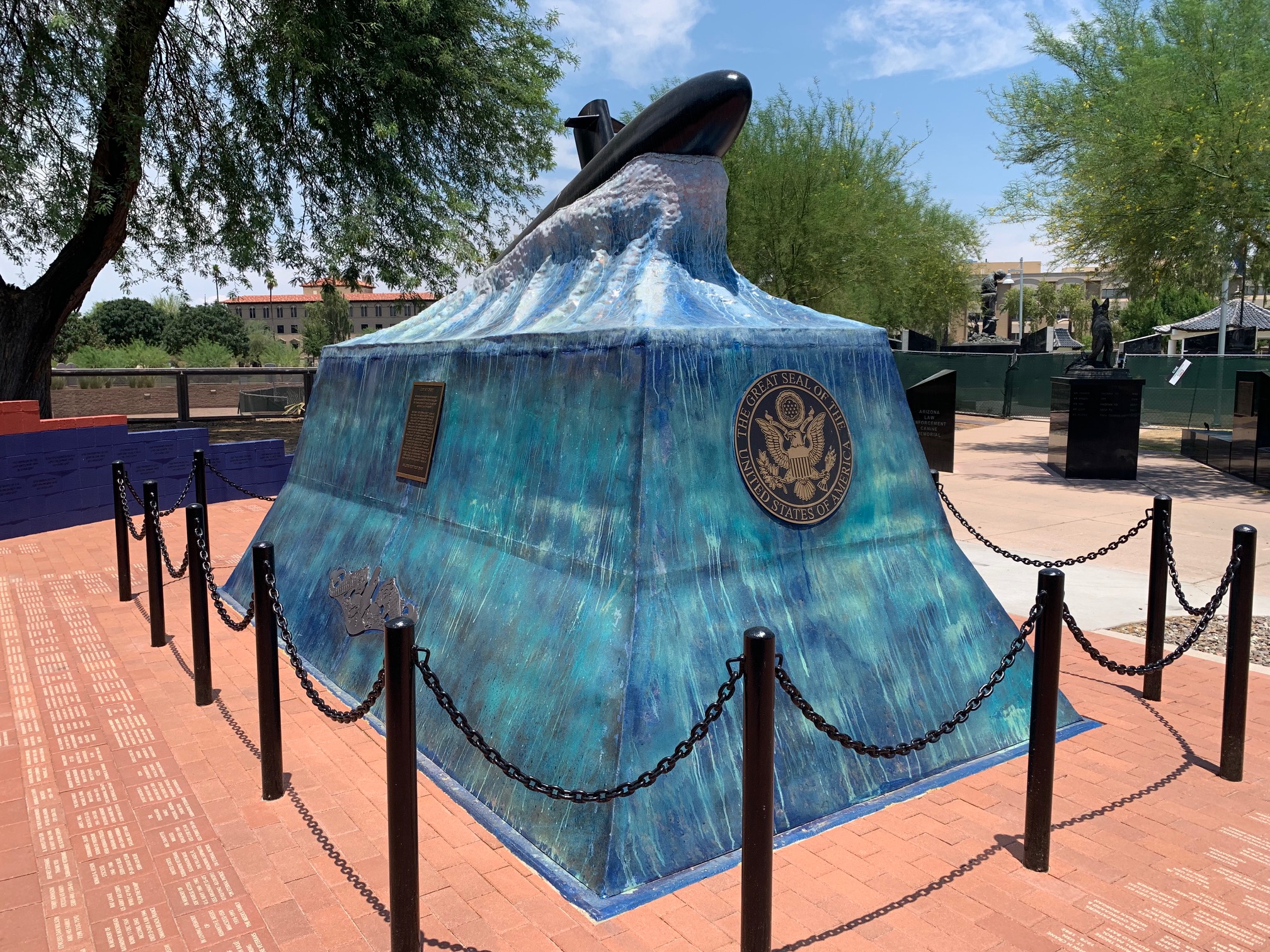 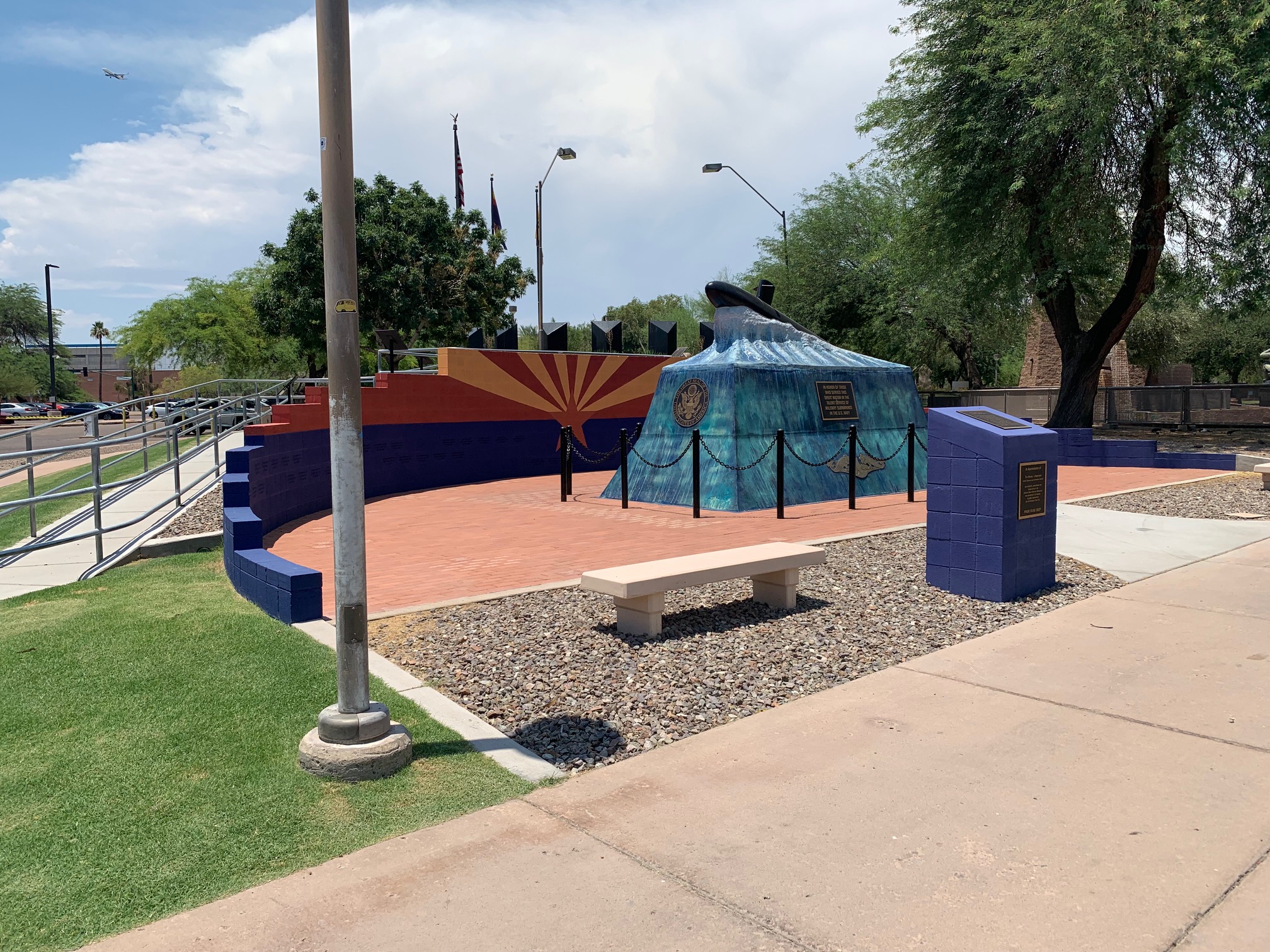 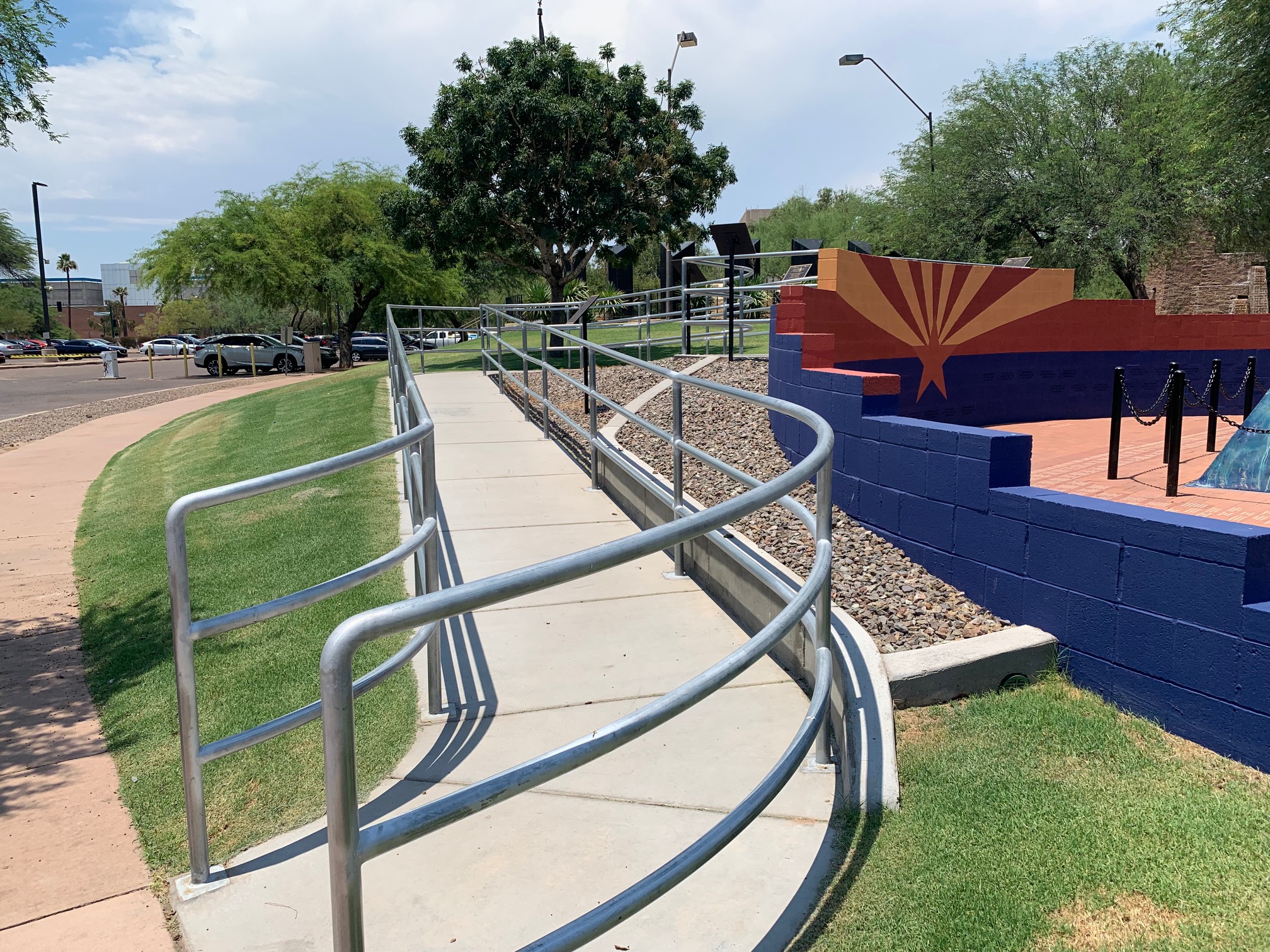 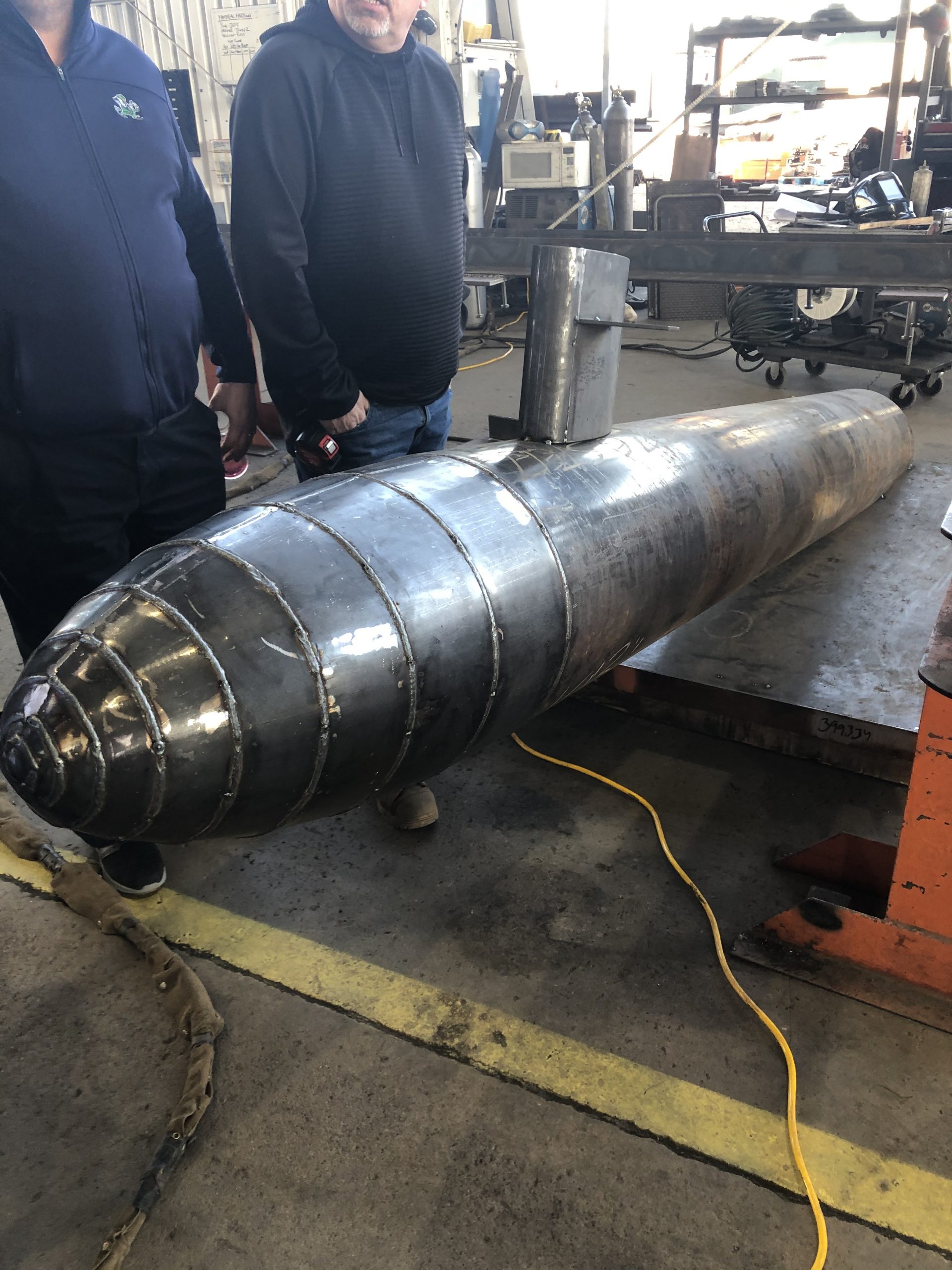 The Arizona Silent Service Memorial at the Arizona Capitol in Wesley Bolin Memorial Plaza. Using multiple materials, the design reflects the vastness of oceans and the drama of an ascending nuclear submarine surfacing in tumultuous waves. The wall is a painted stone product abstractly representing the Arizona flag. The blue symbolizes the deep ocean water engraved with names of all lost submarines since the inception of military submarines, and the number of lost souls aboard. The Arizona flag “sunrise” represents the honor placed on these brave men by the state of Arizona.

The trapezoidal shape of the base is a single pour of cast-in-place concrete. It is covered by welded and patinaed copper, specifically to underscore the “Copper State of Arizona” embracing the silent service of submarine veterans. Bursting through the surface waves, also crafted from copper, is a hand-crafted steel submarine of the general “Attack Class”.

Pavers at the base bear the names of submarine veterans, living and passed. Nautical rope in the safety railing creates the impression of standing on the deck of a ship at the submarine and adds an overall nautical theme.

A significant pathway of steel railing encircles the memorial toward a viewing platform overlooking the monument.

Artwork is extremely important in this project due to the difficulty in representing a submarine in its natural element. Traditional submarine memorial designs often utilize actual decommissioned submarines, or parts of them, rather than rendering the motion and drama of a submarine in active duty. Since there is no access to water at the Wesley Bolin Memorial plaza, sculpture and abstract representation is utilized to create the illusion of the sub's motion and of water falling off the hull of the boat. Azure, green and white patina copper covers the memorial's steep sides to represent the depth of water. The top wave is hammered from copper by a freeform process. The viewing platform above the memorial gives viewers the ability to see it from all angles and as would typically be seen from the deck of ship or dockside.

This was a highly collaborative project between designer, metallurgists, engineers, artists, concrete masonry, welders, steel workers, landscapers and materials suppliers while continually consulting with Submarine Veterans. Most design elements are extremely contemporary uses of modern hardscape materials and required expertise from the General Contractor- Sunland Asphalt and Construction, primary materials manufacturers, fabricators and several engineering specialties in all aspects of construction. The General Contractor coordinated the construction in stages to meet design specs and kept tight timelines associated with the restrictive building envelope allotted by the State of Arizona.

This memorial is believed to be the only submarine memorial in the country funded and built by Submarine Veterans and installed in a public setting. (Other submarine memorials are on governmental military bases) As well, its overall concept and design is artistic rather than historical (often by using scraps, hulls or replicas of decommissioned submarines.) It was funded by public, private and corporate support and donations into a non-profit organization formed specifically for the creation of this memorial.