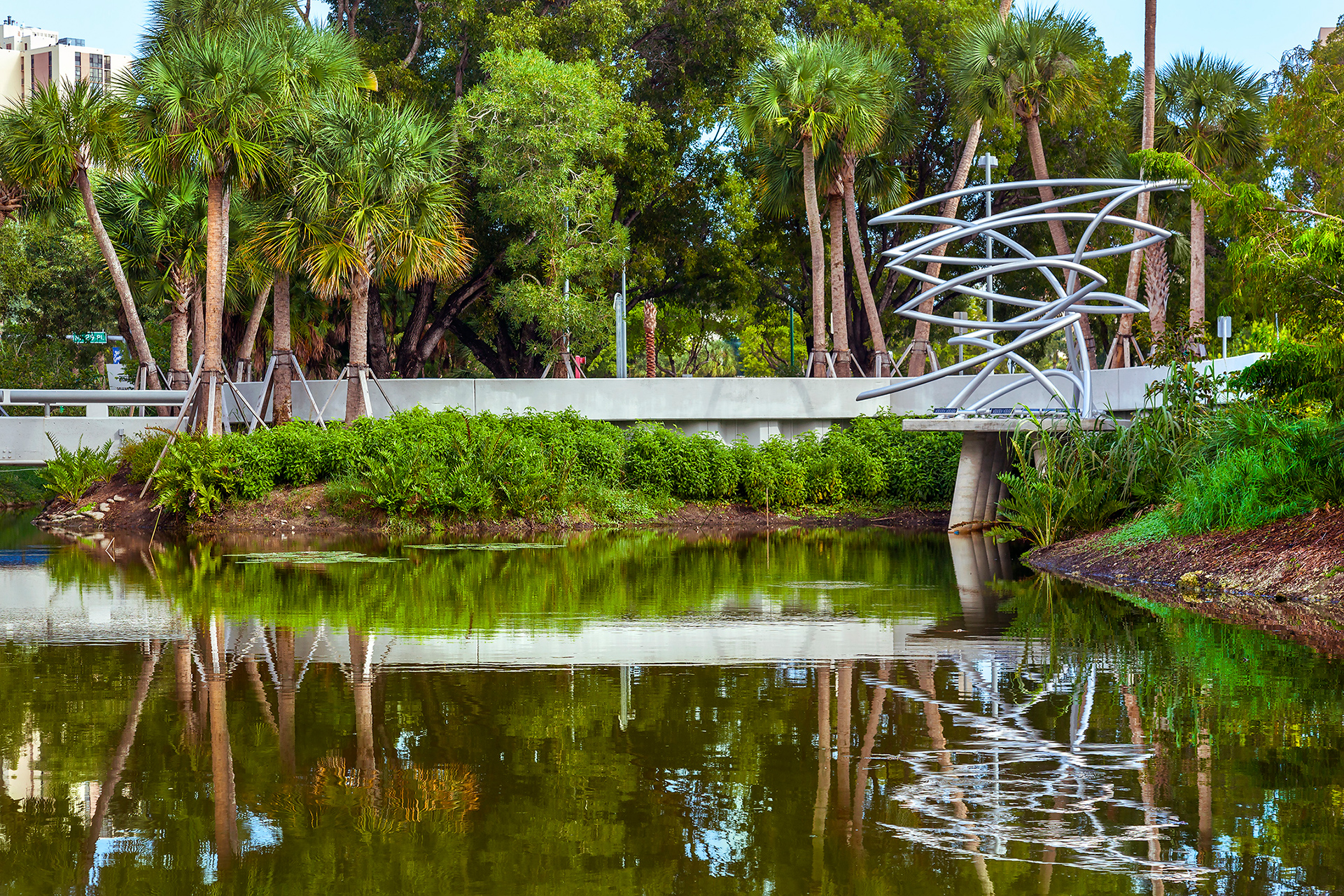 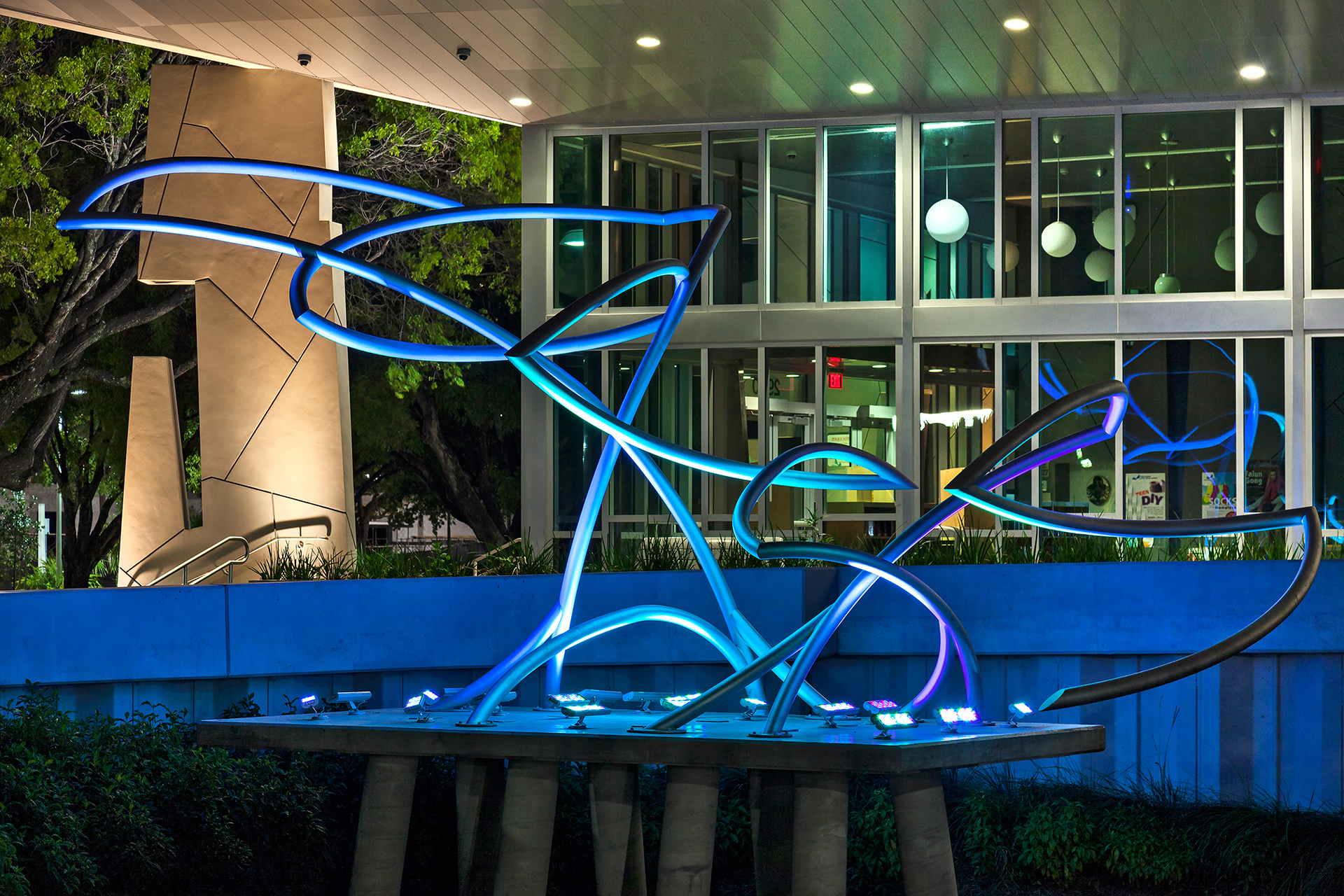 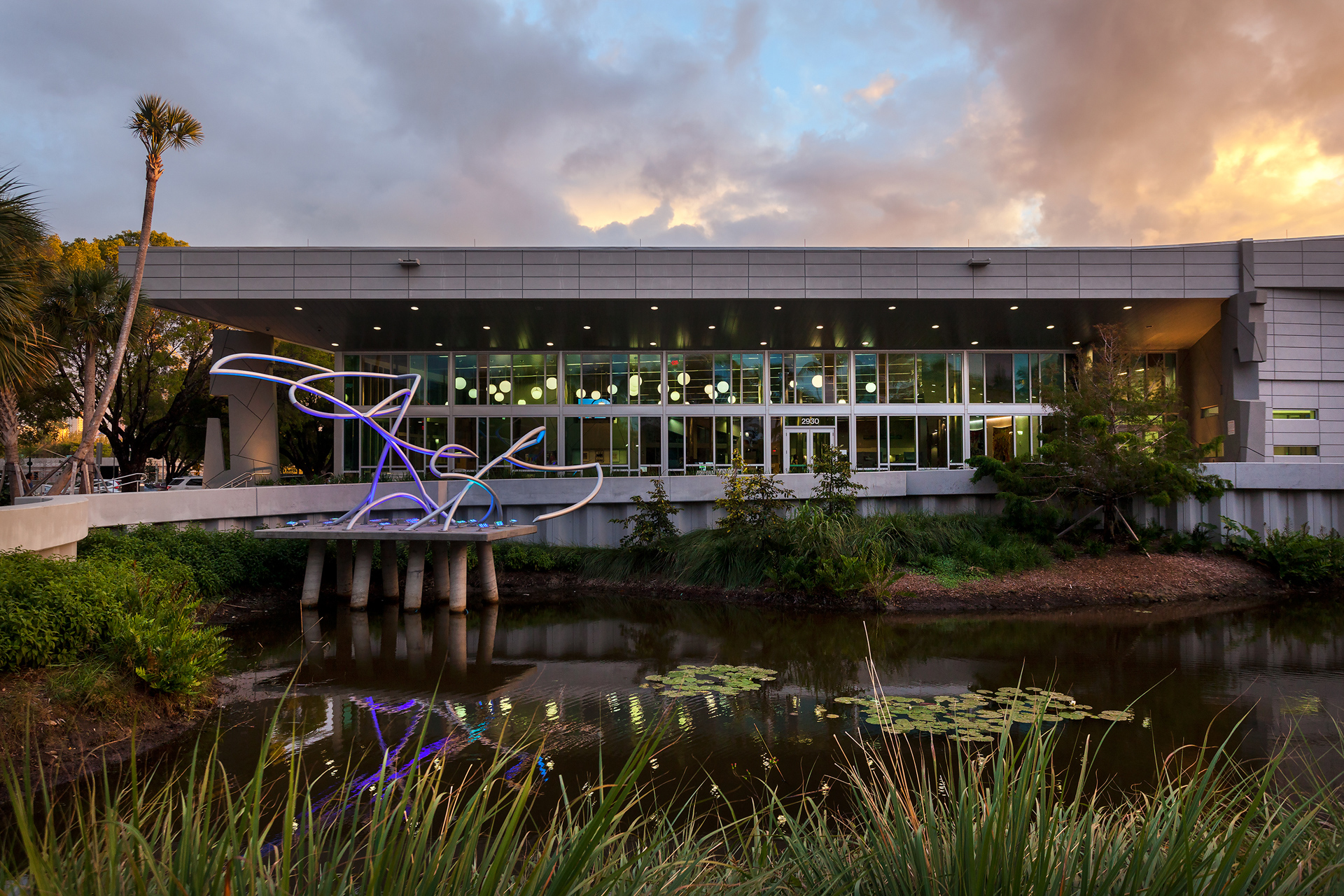 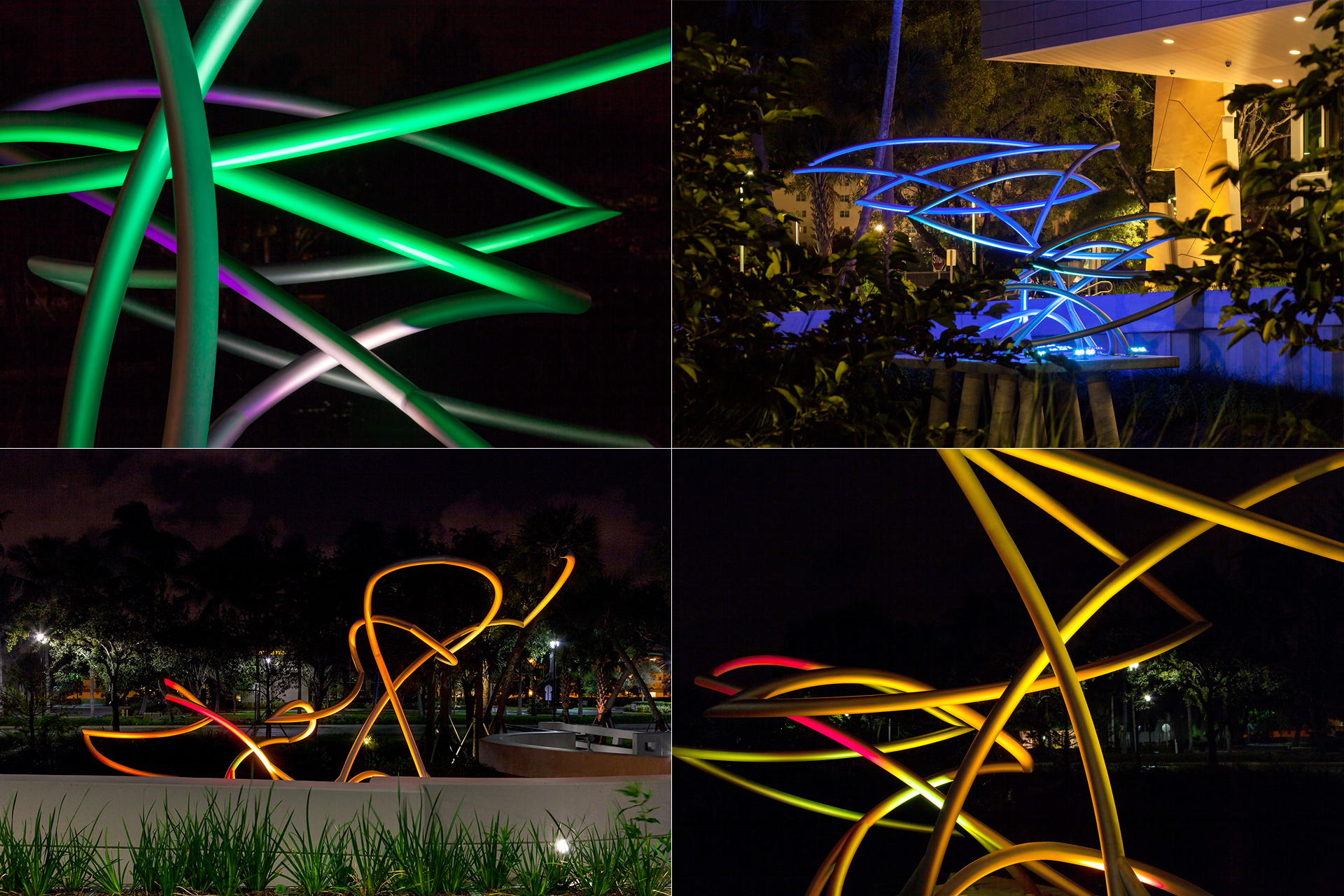 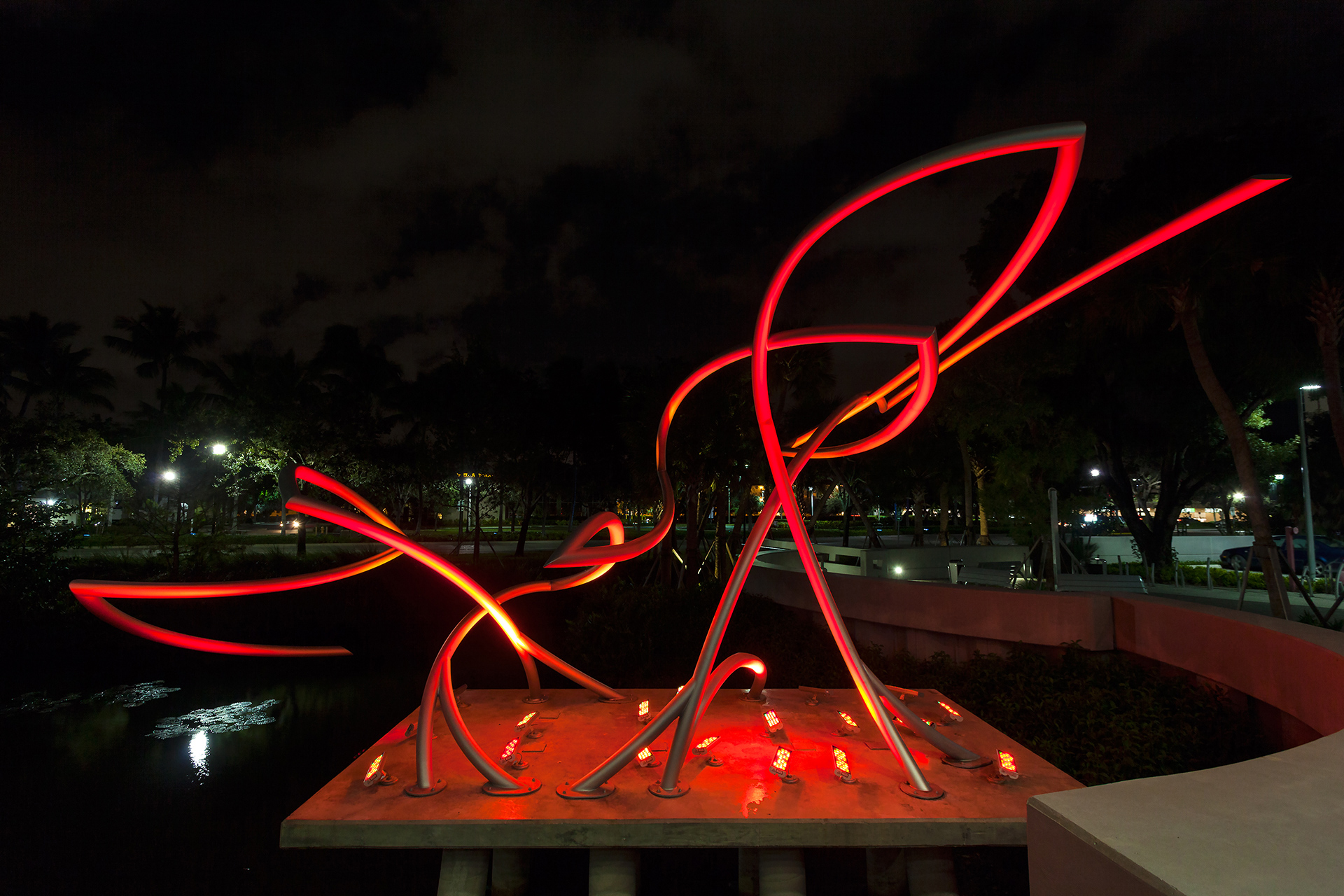 Depeña studied and tested the wind data in various forms prior to choosing the sculpture’s curvilinear form. The sculptural form was developed in plan, section and elevation using the wind speed, direction and duration during the block of time that Hurricane Wilma made landfall and passed through the area of the site. The 2-dimensional drawings created during this rigorous process were used subsequently to develop comprehensive, 3-dimensional computer models. The final sculpture was engineered and fabricated directly using the specific computer model that Depeña developed in his studio.The sculpture’s lighting is activated by a wind sensor (anemometer) on the roof of the library. Using a custom hardware and software combination, the wind data information is being used to control the lighting of the work at night. Slower winds equal cooler colors, while stronger winds reach into the warmer spectrum. The wind’s direction is subtly revealed through color waves and pulses moving across the sculpture according to the current speed/gusts. The overall effect is a mesmerizing visual representation of an otherwise invisible natural force.

"Arc" required that the architect, engineer, fabricator, contractor and software programmer be on board very early on. There was a lot of infrastructure to be put into place before the sculpture could be installed mainly and extensive set of power and data systems. The complex form required quite extensive dialogue during the engineering phase come to the point of conclusion for the material thickness and support. The computer modeling process was done in direct conversation with the fabricator and the engineer. The lighting system involved a complex mechanism of controls driven directly by the wind sensor at the site in real time. The software was written and tested during fabrication and rigorously reviewed and revised on site while examining the local conditions.

From the beginnings mentioned above, Depeña has interwoven the sculpture into a series of six city-wide, augmented reality experiences in the form of a mobile app that heightens the experience beyond the already interactive LED lighting. At this particular site, the app "Lapse" (www.lapsemiami.com) simulates the wind data collected from the library and overlays particles or ethereal light to create a unique experience, enhancing the sculpture’s form digitally in the palm of the viewer’s hand.