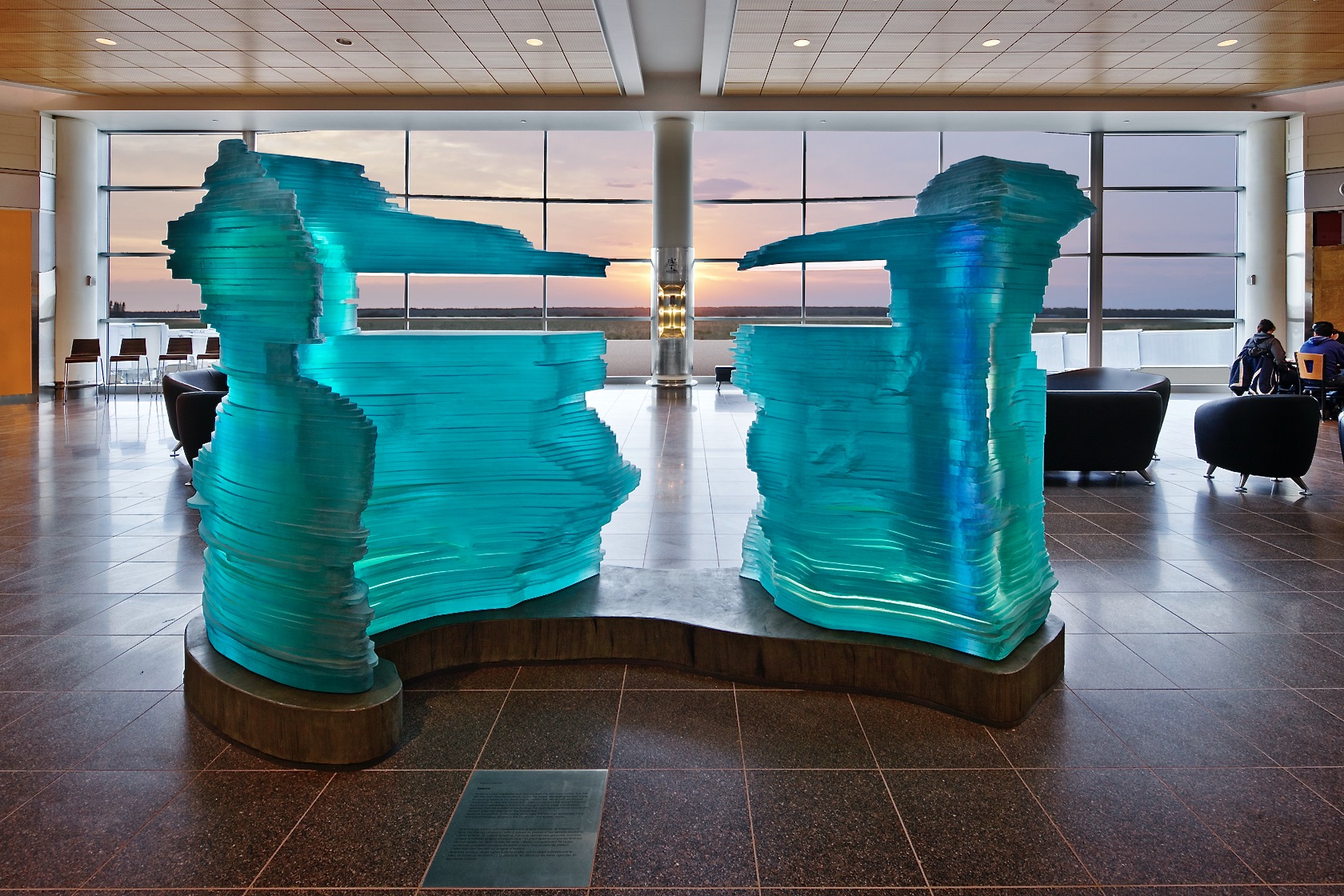 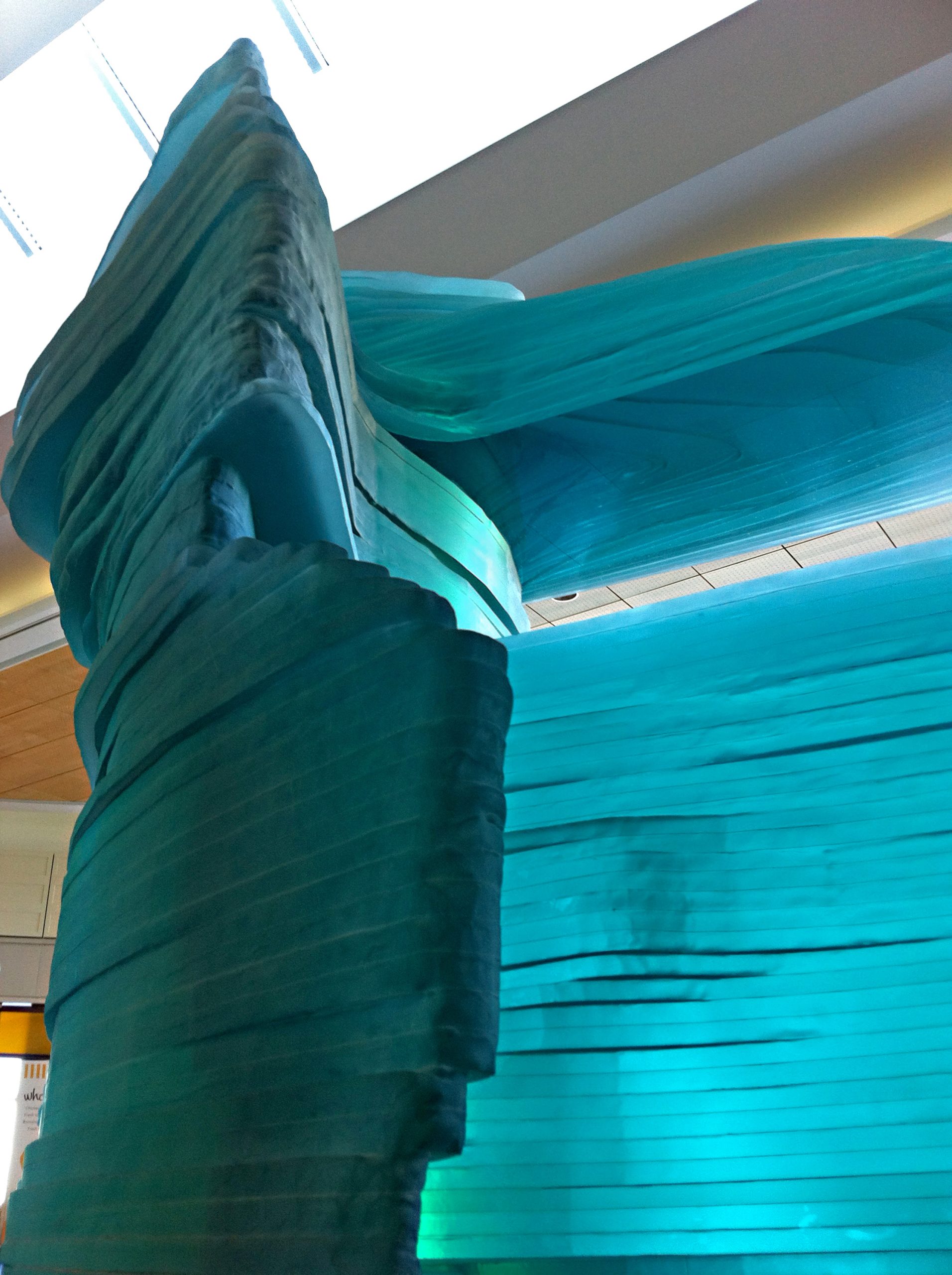 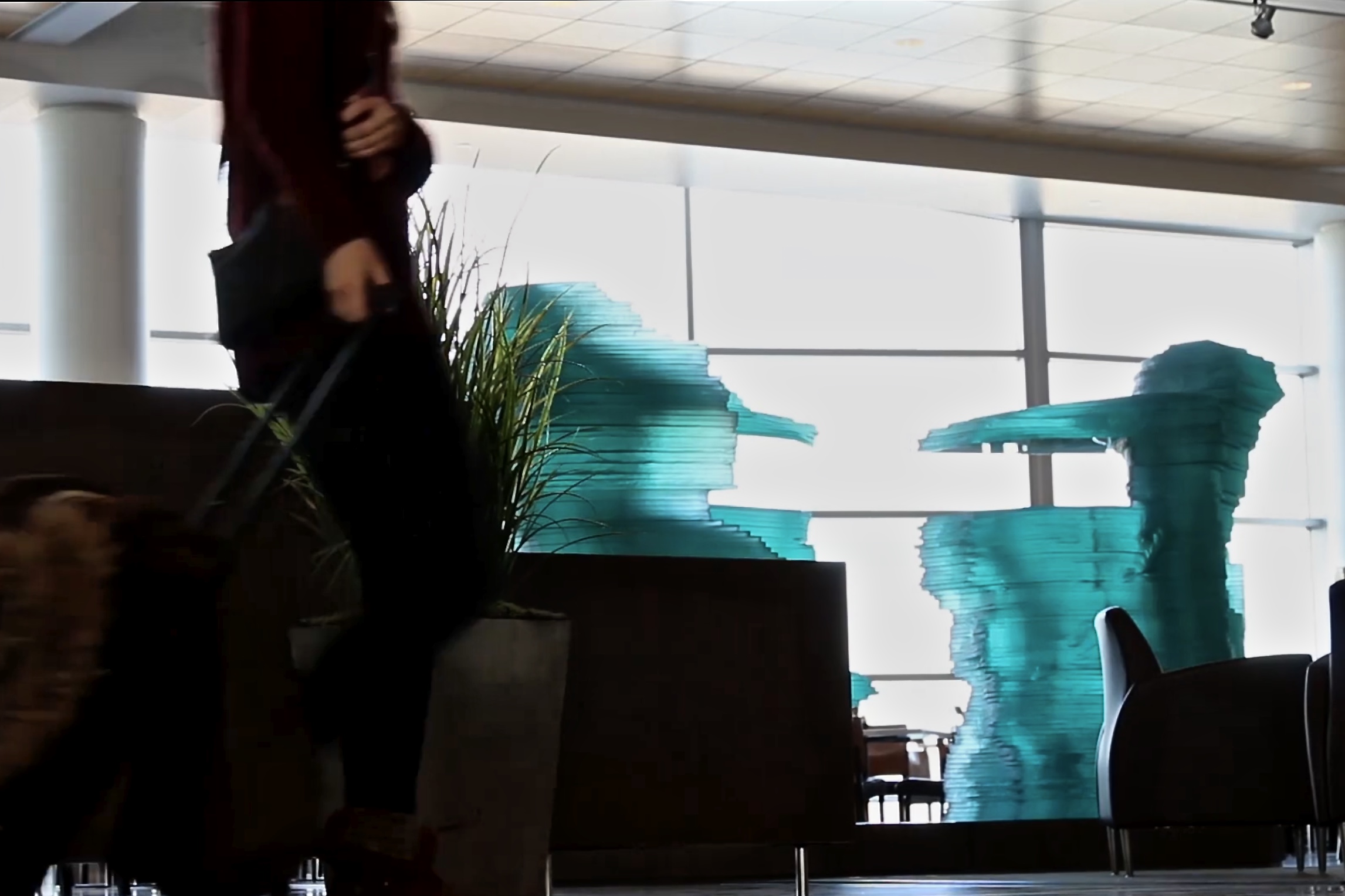 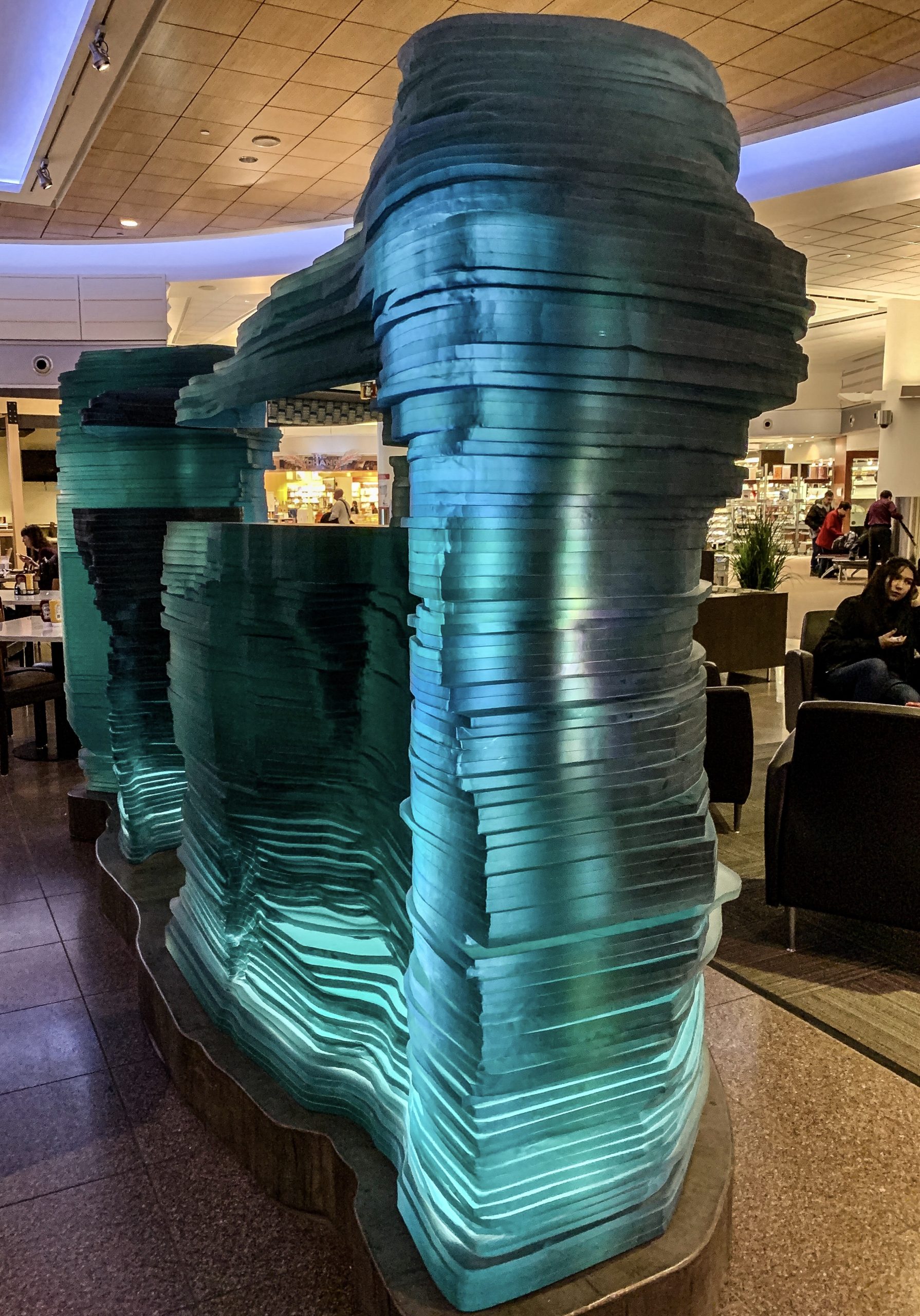 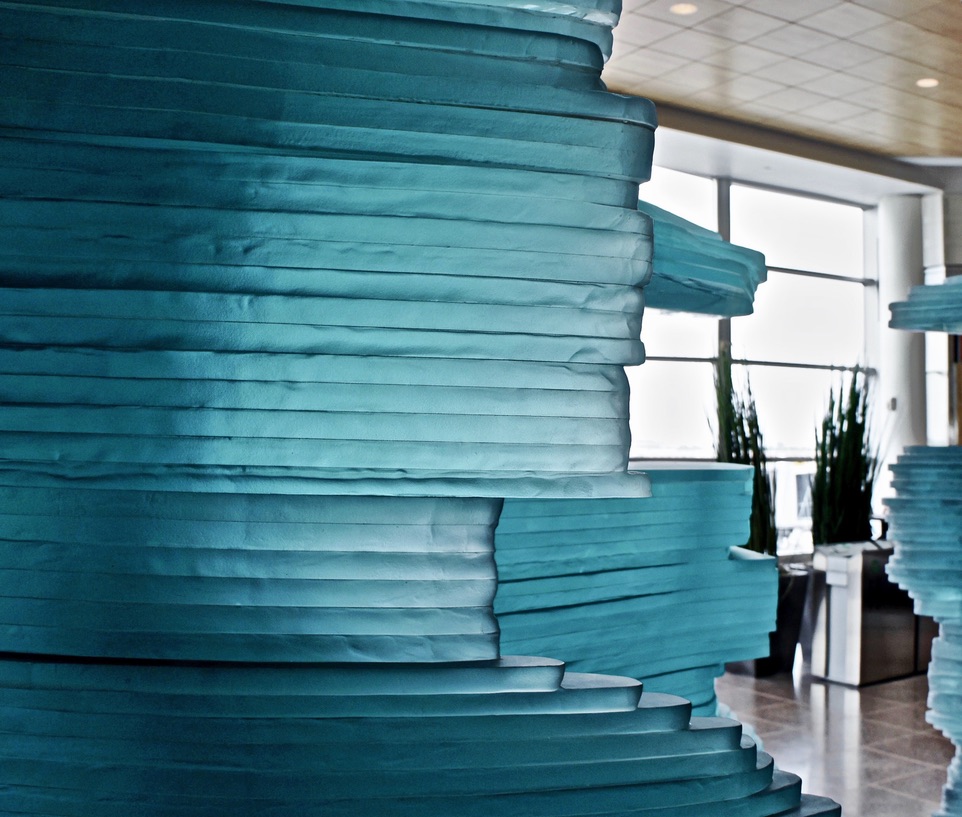 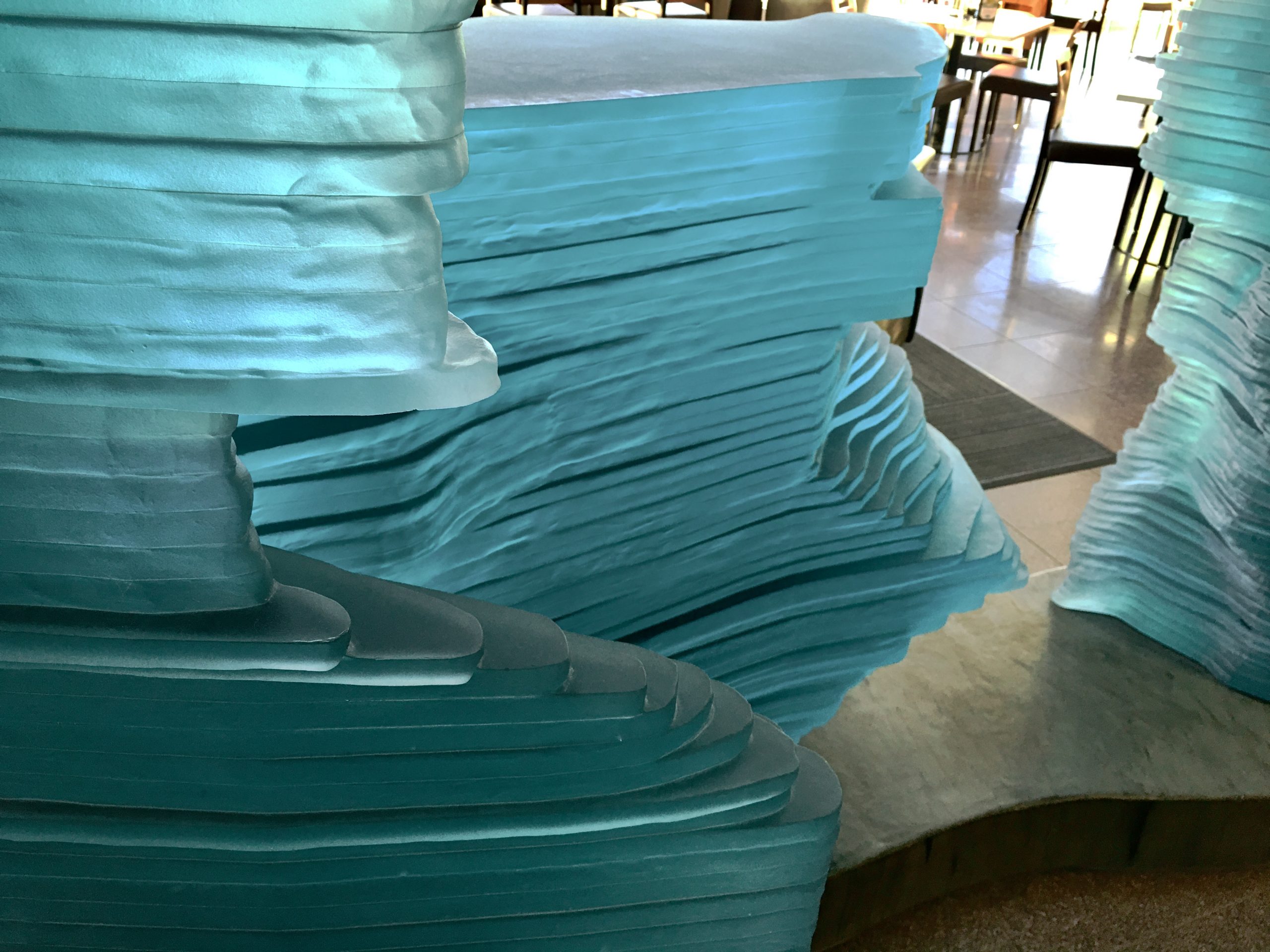 The concept for “APERTURE” is in response to airport architect, Cesar Pelli’s fascination with the Manitoba horizon line, the thin line that stretches to infinity across the prairie, separating sky from earth.
APERTURE presents the viewer with a new perspective in experiencing the horizon line that lies just beyond it, through the glass curtain wall. APERTURE’S two illuminated glass structures incorporate cantilevered openings on axis that combine to create an orifice that focuses the viewer’s attention directly on the horizon line.
Additionally, “APERTURE” references the regional landscape, windswept snow, river ice, rock strata, and Buffalo Stones standing on the prairie.

The client’s goals were quite straightforward. They wanted to acquire art for the airport that reflected the region and related to the architecture.
The main issues that concerned me were similarly around context, and the interwoven relationships between artist, viewer, and the site. I sought to identify the essence of the site, and present it to the viewer in ways that would perhaps, compel them to consider their environment in new ways, to create a new experience of that location.
To attain these goals I worked with the architect’s vision of the building regarding the horizon line, as mentioned earlier. I also reiterated the most striking architectural feature of the airport, Pelli’s dramatic cantilevered “plane wing” roof.
The technique of stacking and laminating glass allowed me to create a form that was very much unlike the common perception of the flat prairie landscape, but could be identified as a portrait of the Canadian prairie.
However, what pleases me most, is observing viewers interacting with the piece. Children running up to the piece and playfully engaging with it and even being raised up onto their parent’s shoulders to peek through the opening and view the horizon line.

I was intrigued by Cesar Pelli’s statement about his fascination with the prairie horizon line. I wanted to somehow incorporate the architect’s vision into my work.
A few years ago I created series of glass walls in an office tower in Hong Kong that were 100 feet long by 29 feet high. They had the desired effect of blocking out an undesirable view.
This project required a completely different solution. I wanted the piece to have a strong presence that incorporated the view, not block it. Creating a dynamic sculptural form with an opening at the right height to frame the horizon line was an solution that allowed viewers it engage the work and interact with it.
I had many collaborators. I worked engineers to determine load capacities and structural reinforcement, as well as bond strength for glass laminations, with particular regard for the cantilevered glass. I worked with lighting designers to help realize my desire to internally illuminate a solid 10-ton glass sculpture.
I also collaborated with the interior designer, Stanus Smith. In our discussions he had several interesting ideas. One that I used was to create two pieces rather than one.

APERTURE is comprised of over 200 horizontal layers of ¾ inch glass. The luminous work uses LED lights embedded within the solid glass sculpture. LED lighting technology allowed me to explore unique approaches in illuminating glass. I applied dichroic filters to create lighting affects of dynamic shifting tones in blue, violet and gold. The unique lighting brought out nuances and details in the sculpted form. Glass has the unique ability to transmit light or capture and embody it. APERTURE’S carved glass with its translucent frosted white surface became a three dimensional canvas, giving form to light.