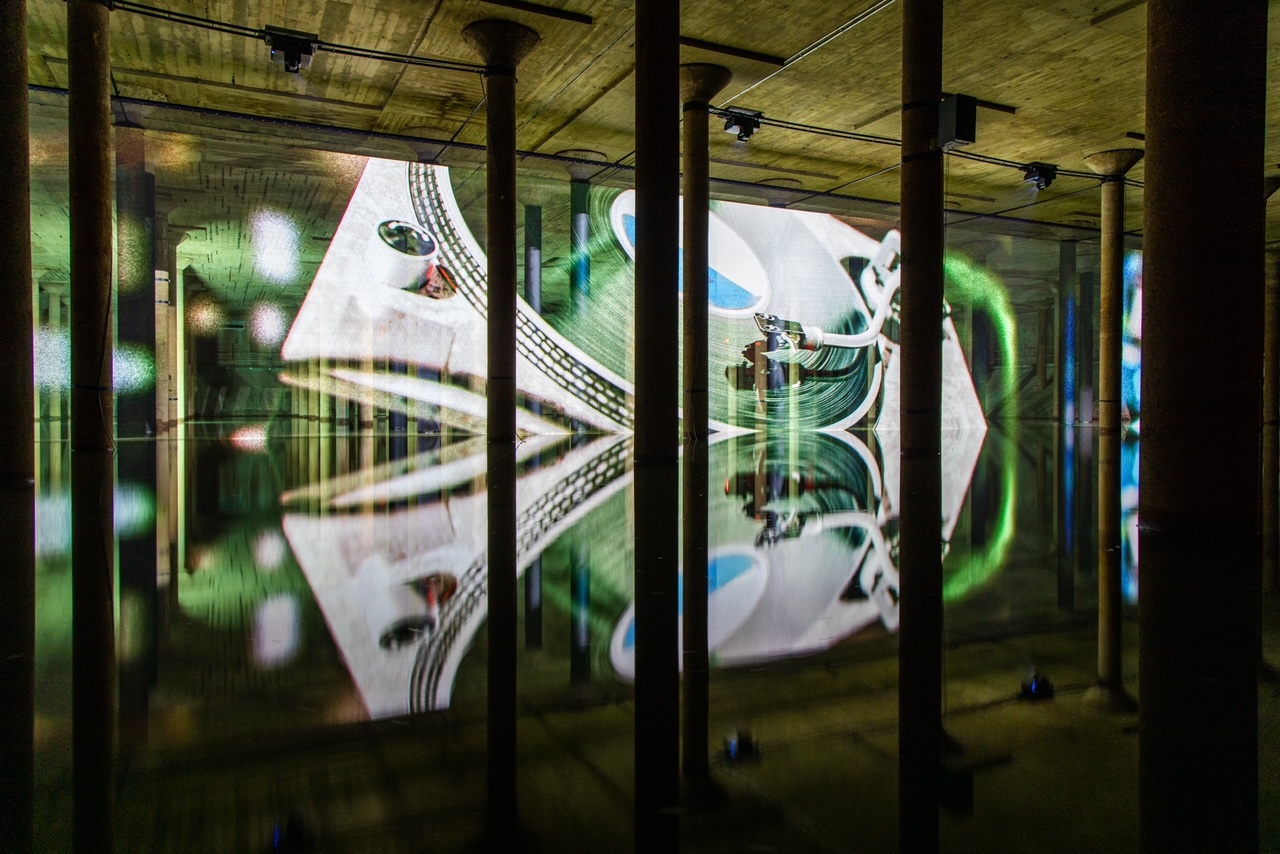 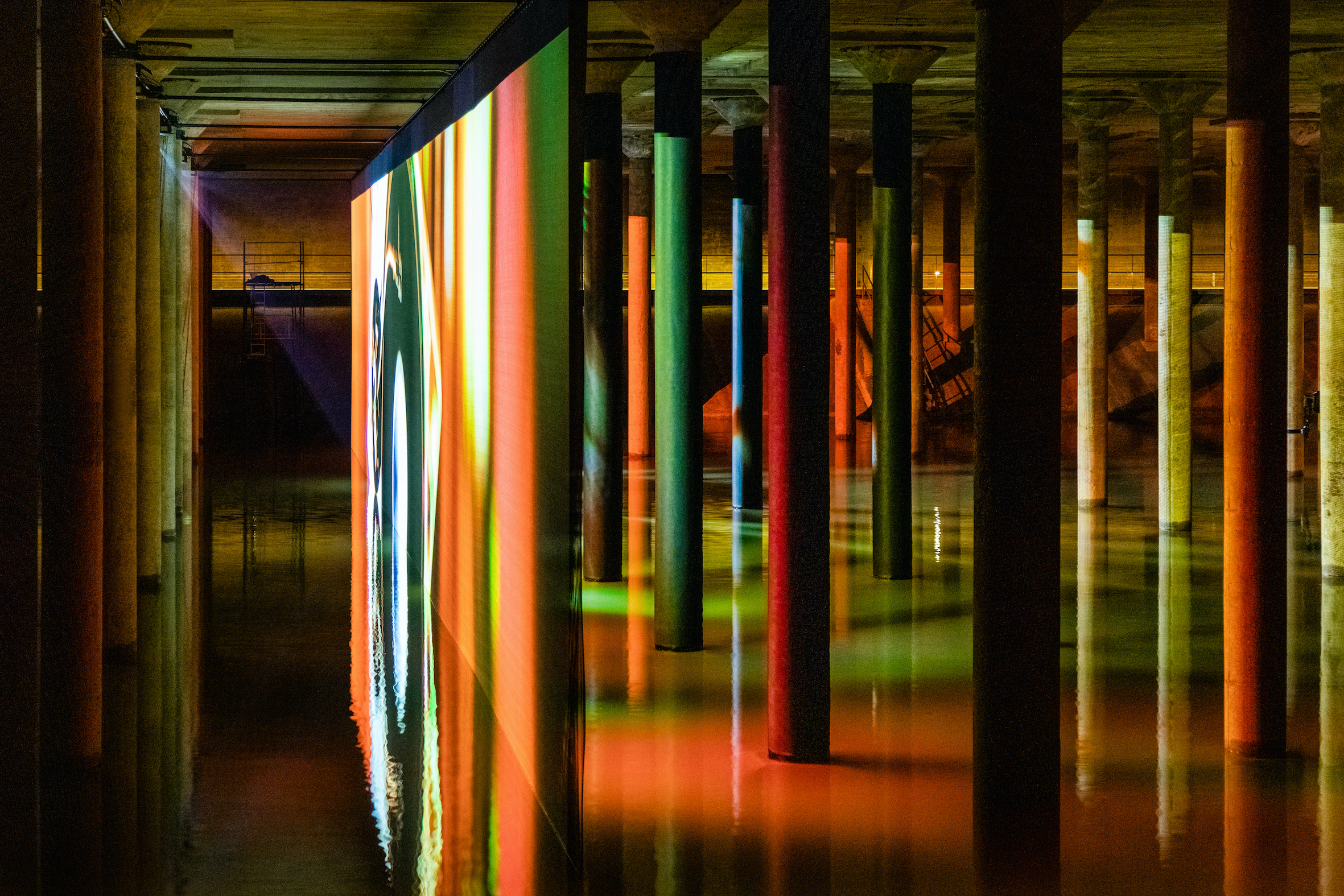 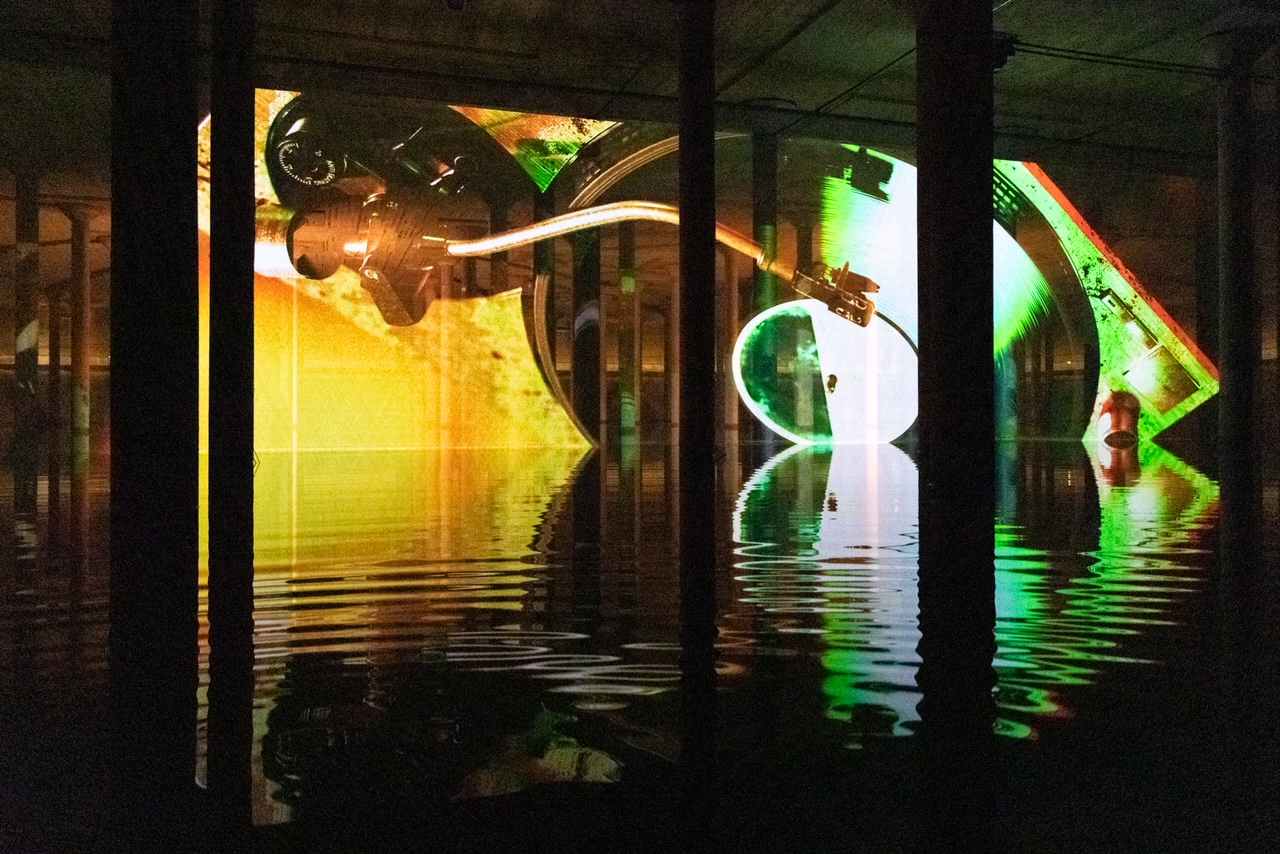 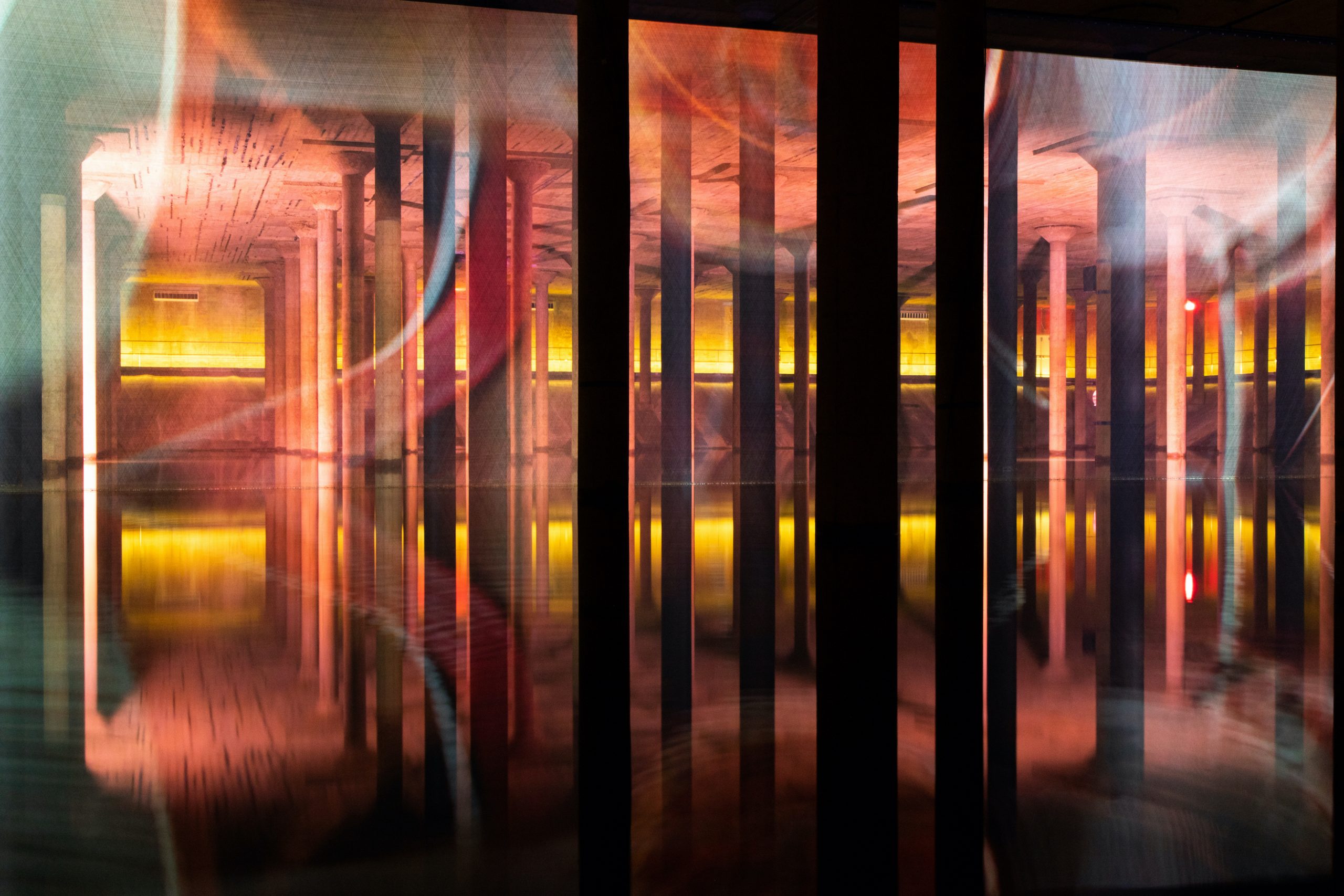 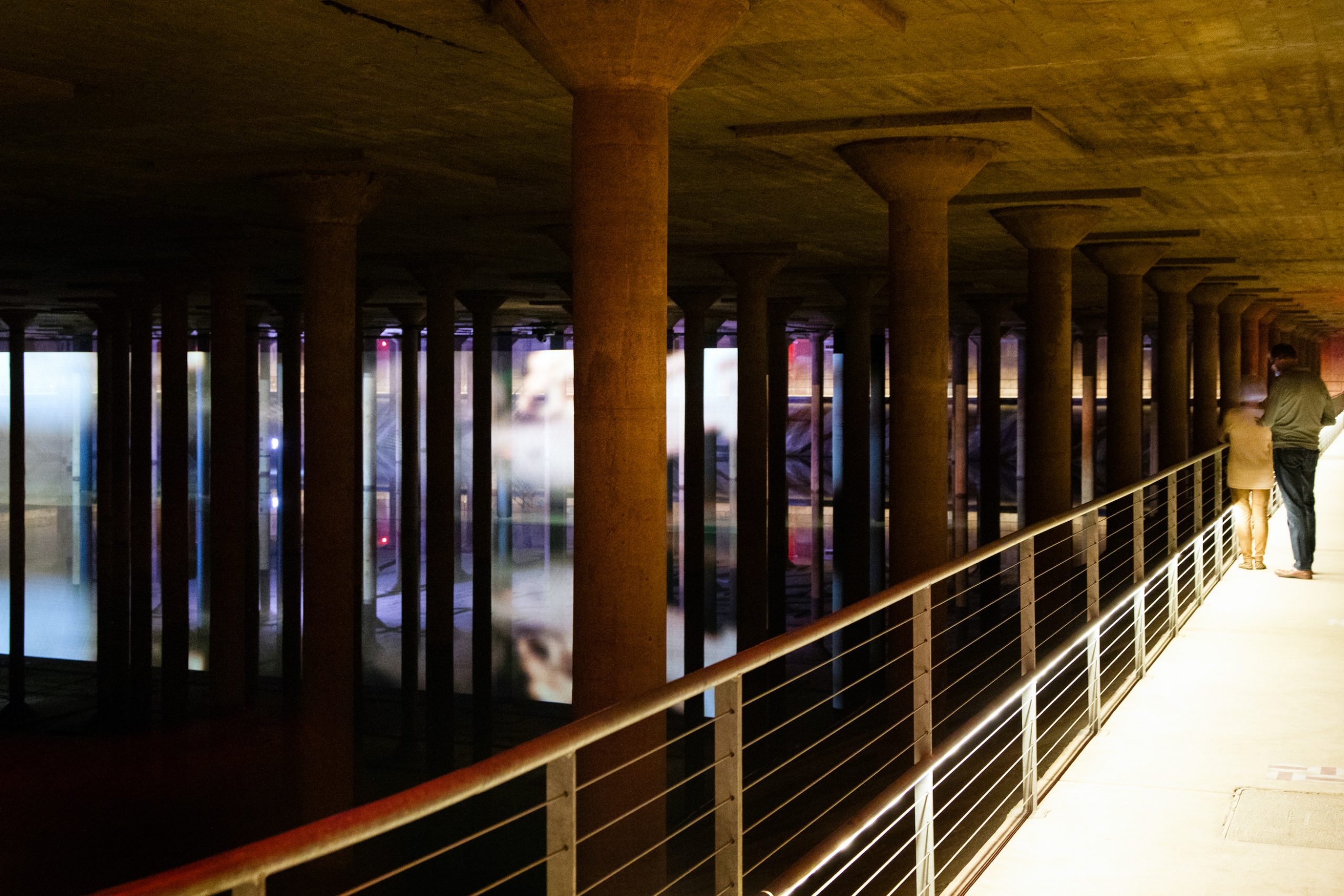 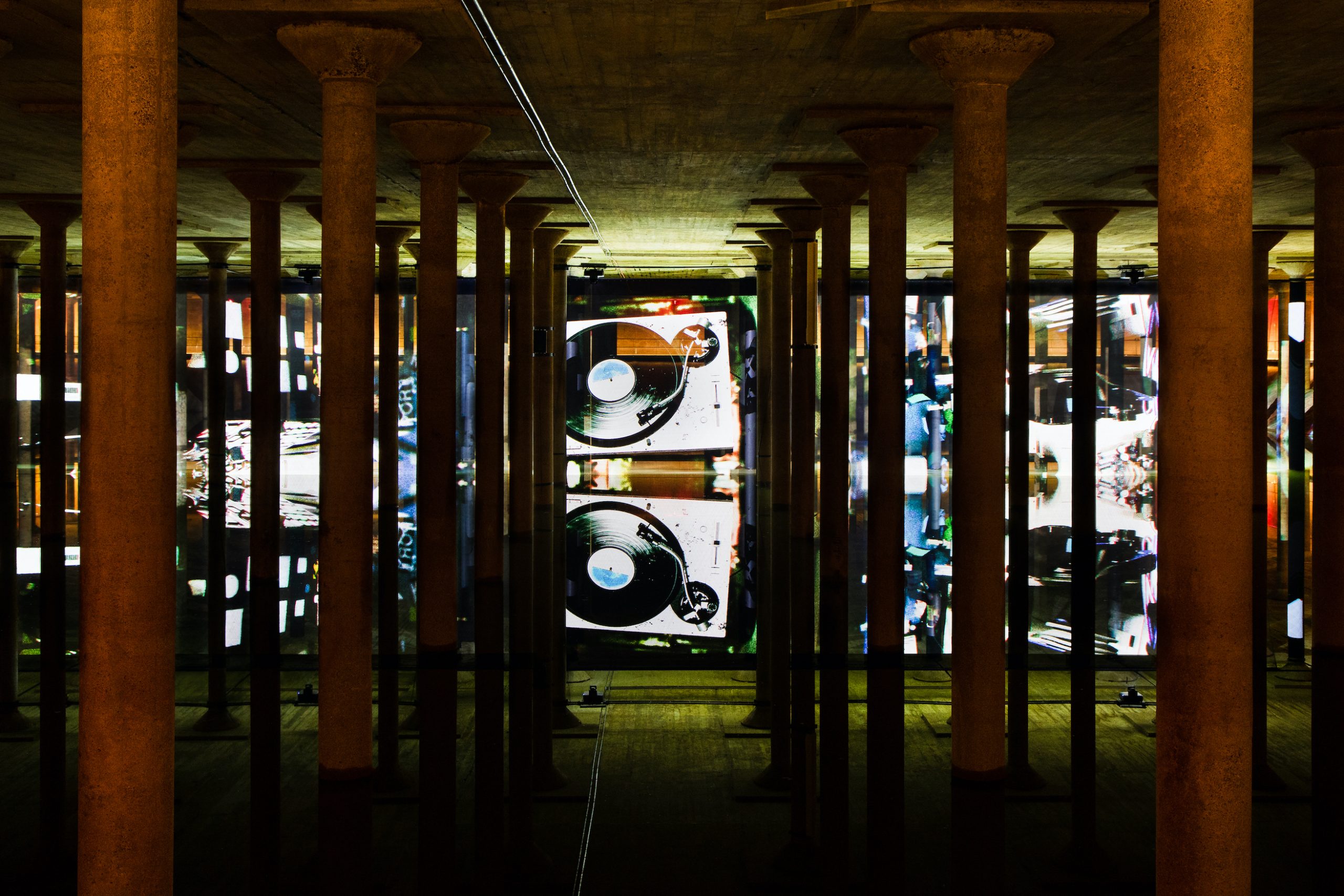 “Time No Longer” is an immersive film and sound installation commissioned for the Buffalo Bayou Cistern’s vast subterranean reservoir.

Multi-media artist Anri Sala created this project which incorporates a CGI film projected onto a translucent, 22’ x 143’ screen with a soundtrack emanating throughout the 87,500 sf space. Visitors stroll the Cistern’s perimeter, observing through the space’s 221 supporting columns.

The film depicts a turntable floating in zero gravity tethered only by its cord, which allows it to play a vinyl record. The protagonist is the turntable’s stylus, rising and falling on the record, resuming, and ceasing its music. The stylus conducts itself, playing an arrangement from composer Olivier Messiaen’s “Quartet for the End of Time”, created when he was POW in 1941.

Captivated by Quartet’s clarinet movement, Sala found a natural complement in the story of Ronald McNair. McNair, one of the first Black astronauts and a professional saxophonist, planned to record a saxophone solo aboard the Space Shuttle Challenger. This would have been the first musical composition recorded in space, but sadly never occurred. Sala arranged a saxophone companion recording to Messiaen’s clarinet to communicate a piece that was intended but never realized – a duet of empathy.

The Cistern is as dramatically enticing to artists as it is challenging. Raw and historic (1928), its scale, columns, and acoustics, not to mention the presence of water, all combine for ambitious, practical, and aspirational thinking.

Our curatorial goal is to collaborate with artists whose work will reveal the space in new ways, while giving them opportunities to advance their own practices.

To explore this unique art space, Sala used a virtually invisible “HoloGauze” screen that bisected the Cistern so that the turntable appears to hover in the mid-air vastness of the space.

Second, Sala integrated the Cistern’s inherent 17-second reverb into the installation. The musical score pauses intermittently, fading in/out, so the space’s reverb becomes an active acoustic partner with the saxophone and clarinet compositions.

Third, dramatic lighting design suggests the 16 sunrises/sunsets that the ISS experiences each day. Also, Sala programmed the perimeter handrail lighting such that it dims, flickers, and extinguishes at appropriate moments in the film/score.

Viewers experience the work in 360 degrees, as the film, sound and lighting unfold uniquely depending upon one’s position.

From the moment he saw the Cistern in 2019, Anri Sala was taken with it. His most ambitious project to date, Sala views the Cistern as the perfect setting for Time No Longer given Houston’s two vertical frontiers: the downward of extracting resources and the upward of venturing into space.

The latter most strongly informed his narrative and process. Sala worked for seven months with CGI artists in Montpelier, France to create the 13-minute film of a 1980’s era turntable floating in the US Lab of the ISS.

Equally compelling, the score was recorded and arranged in Paris in partnership with two of Sala’s long-term collaborators, Hungarian-American musician André Vida, and French sound designer Olivier Goinard. The saxophone was performed by Vida himself, while the clarinet was played by French clarinetist Raphaël Sévère.

Over the course of a year, project teams in Berlin and the US performed the essential planning, designing, engineering, testing, and perfecting of the complex multi-media requirements of the installation. Ultimately, key members of the team from Berlin, Paris and the US gathered in Houston to install Time No Longer over three weeks.

Weingarten Art Group curated and project managed this project from start to finish.