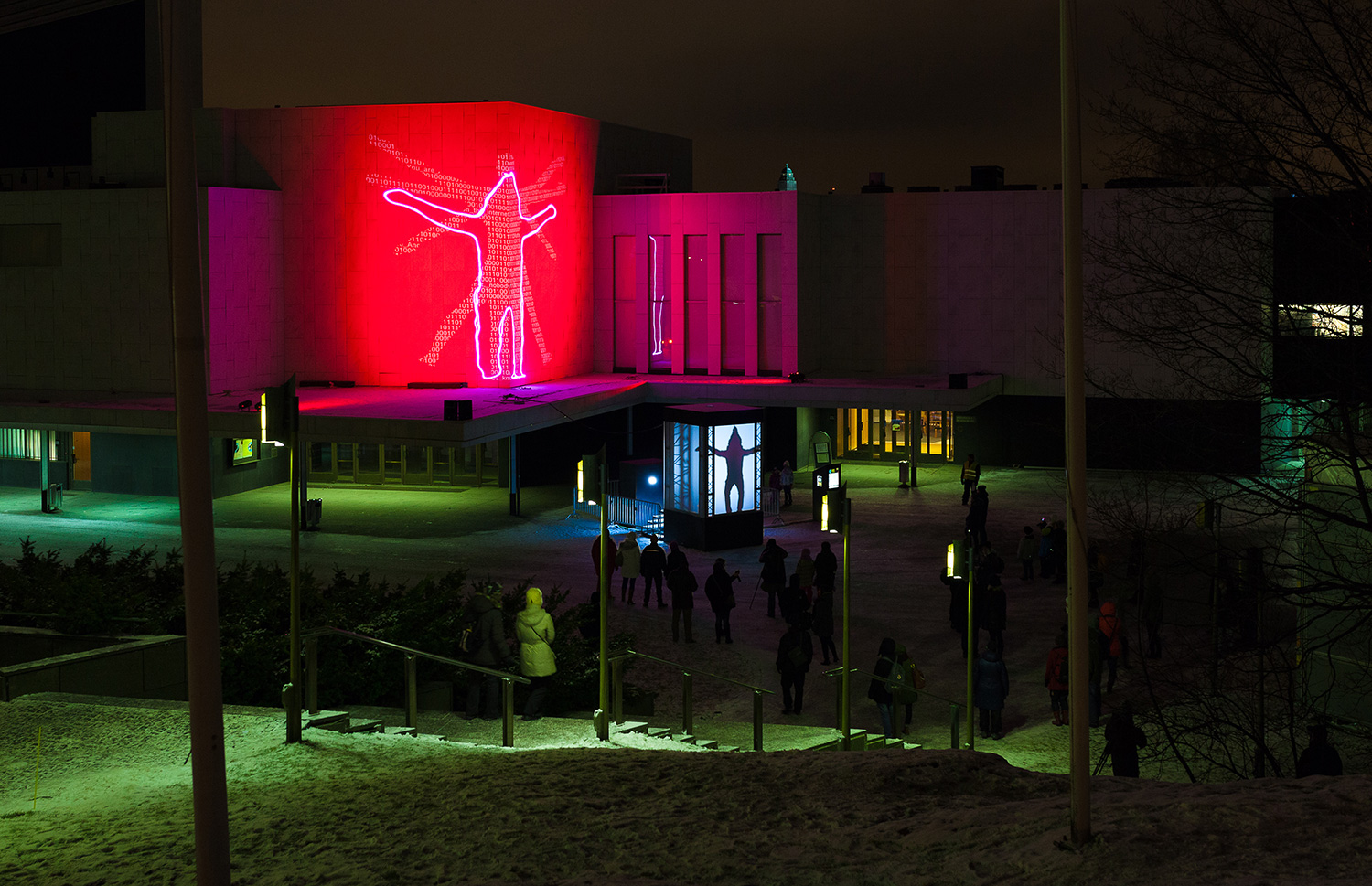 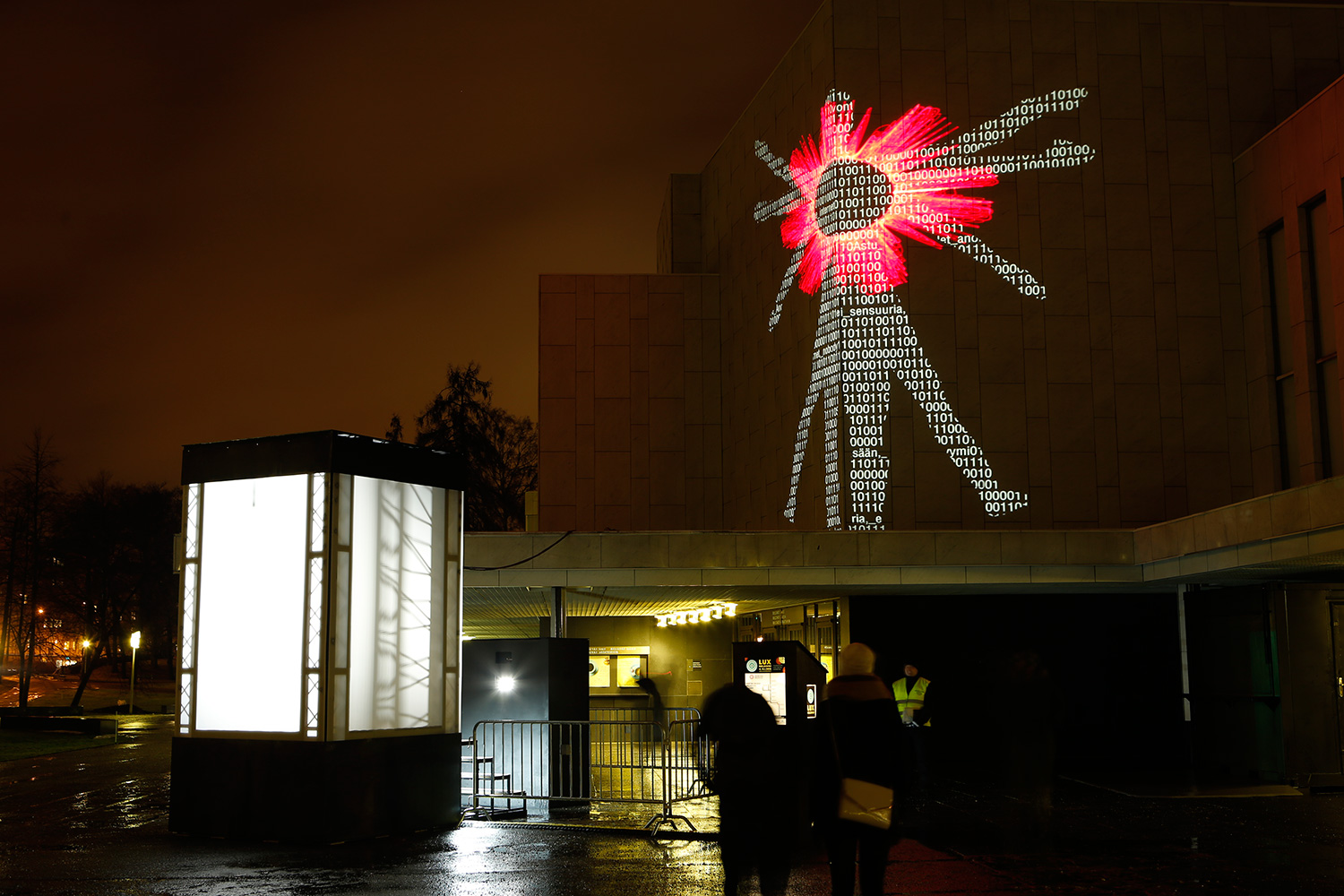 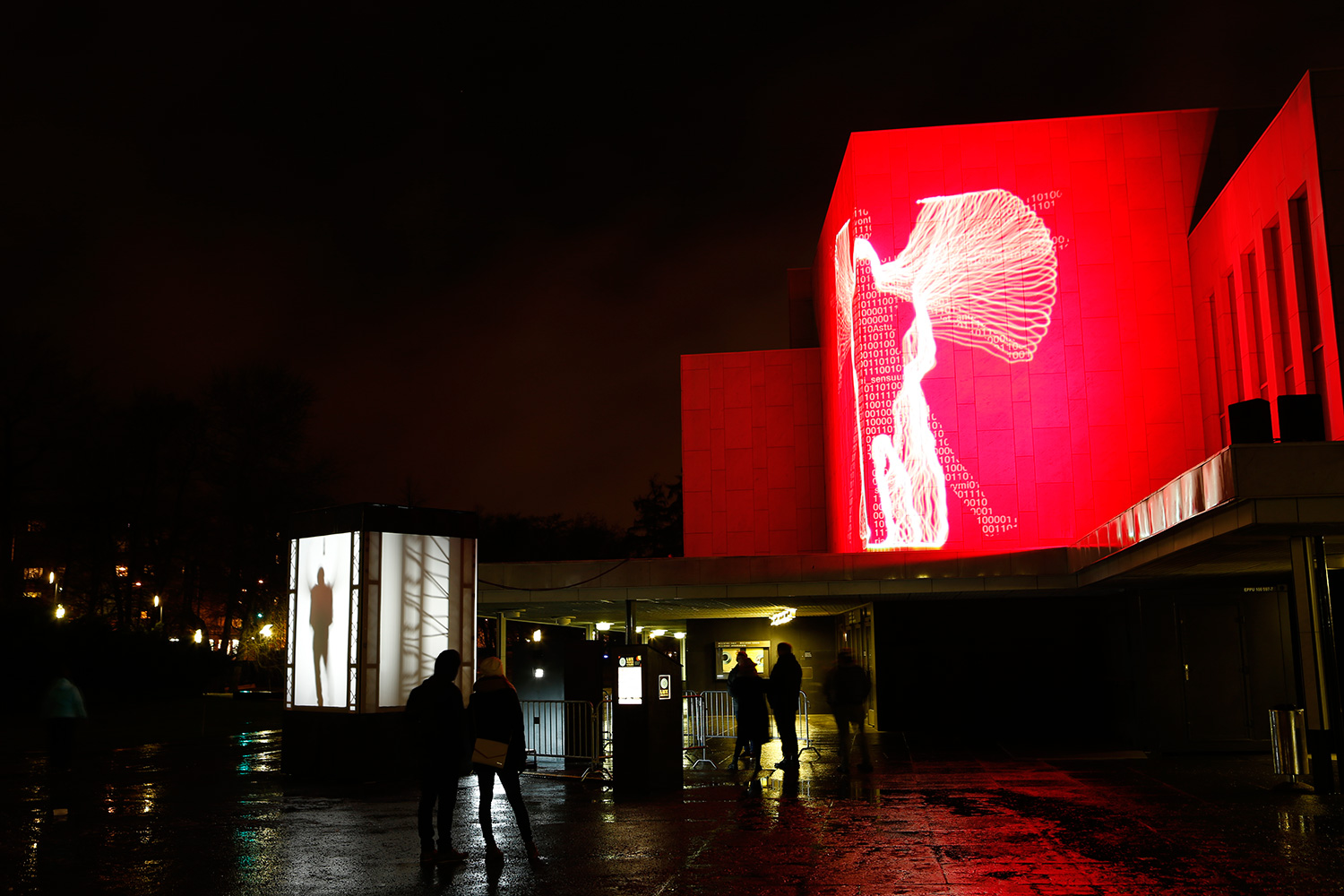 A white glowing cube has been erected on front of the Finlandia Hall in Helsinki, Finland. Inside is a microphone. Laser light tracks movement and sound. The stage is available for anyone who wishes to express an opinion, tell a joke, or sing. You have three minutes. No control, no censorship, no identity. Light has become an enabler of civic activism.

“Anonymous” is a temporary light art intervention developed by the Lighting Design Collective (www.ldcol.com). The piece debuted at the Lux Helsinki light festival, arranged for the seventh time between 4 and 8 January 2015. Over 200 000 visitors were brought to the centre of the Finnish capital city by the festival. One of the themes was audience participation: spectators were actively involved in artworks, which they could help to complete. “Anonymous” answered this brief by allowing the visitors to alter and to create the visual expressions through their movement and voice. Using pioneering real time laser mapping and 3D tracking technologies the piece was projected onto the façade of Finlandia Hall, a highly symbolic building designed by Alvar Aalto in the centre of the city.

Whilst providing a platform for interactive fun for the whole family, the piece also functions as an opportunity for civic activism. Anonymous turns any building façade or other surface into an urban communication tool. Using light-based expression, it visualizes the speaker's voice and movements, creating an abstract projection of light and motion on the facade. The light will not reveal who is inside the cube creating a false sense of privacy to the speaker. Speaking from behind a perceived anonymity allows for direct, unfiltered opinions, much like what can be witnessed on various online forums. The installation draws inspiration from the famous cartoon by Peter Steiner which states that "On the Internet, nobody knows you're a dog" published by The New Yorker on July 5, 1993. The cartoon symbolizes an understanding of Internet privacy that stresses the ability of users to send and receive messages in general anonymity. This has arguably given rise to “trolling” and other forms of opinionated writings that only appear possible due to the perceived anonymity of the writer.

When brought into urban context this contemporary form of communication can also be seen to relate to the increasing processes of individualization within postmodern societies. “Anonymous” as a temporary art intervention appears intentionally light hearted and festive with added layering of social commentary available to the users. The lighting interactively underlines the idea of individualism by automatically activating itself at the entrance to the cubicle, hence connecting the person with the building and all the symbolism it presents in this particular context.